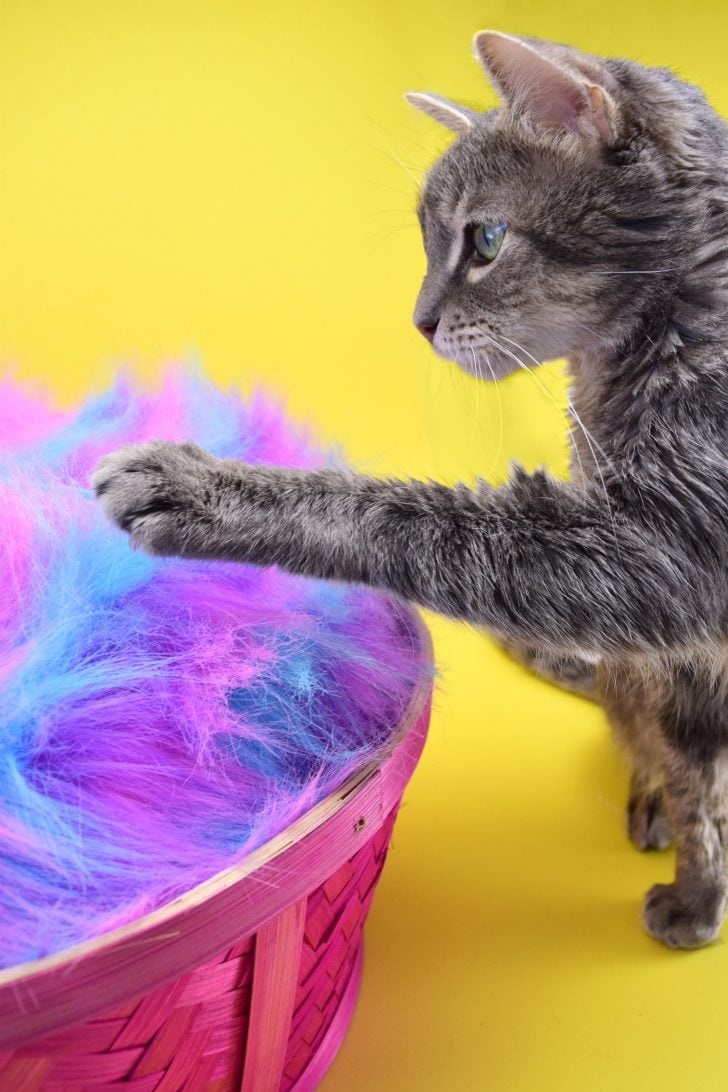 Repurpose those old Easter baskets! Use whatever fabric you already have on hand and an old pillow for an Easter basket cat bed your kitties will love!

So Easter has come and gone but there’s still probably a half a dozen (at least) hard boiled eggs in your fridge, right? And then there’s the chocolate that was so exciting Sunday morning but maybe after over-doing it just a bit now makes your stomach do a flip just looking at it? Or maybe you’re way smarter than me and don’t overdo the chocolate like I do, to the point of making yourself ill over it days later? :)

Well, I spent this Easter tucked in bed with my fifth day of fever with cat Marla, who was also ill plus my other cat Maybe and my little dog Carly…  just me and the girls :)  This past week we started a new show, Sons of Anarchy and we’re already into the fourth season. Being bedridden sucks but dang if it doesn’t help me clear out some of my Netflix queue!

Even though I felt bad, I think my poor Marla felt even more poorly. She had not been feeling well and went to the vet on Saturday who did a bunch of tests, sent us away and told us to come back when her usual vet was in. Going back on Tuesday I found out I would be bringing her back on Friday for emergency surgery. On the way home I started to feel poorly myself and just assumed it was sympathy pains. I get them from my dad. Both he and I will get a massive headache, backache, nausea, whatevs to rival that of the original sicky :) Alas, it was a real, live human infection and me and my girl were just destined to hang out in bed together for a while :) Right as I was realizing that Marla wasn’t feeling her best, but before she got really sick, I decided to take a big ol’ Easter basket and turn it into a cat bed for her. I bought a flipping ton of some kind of ugly blue, pink and purple fake fur that I’ve used for another project I’ll share soon, leaving a good yard and a half of this stuff left over. And though I’m not in love with the stuff, Marla most definitely is. At first, I just cut a few rectangles of the stuff and folded them onto her more favorite spots. One on top of my desk, another on Carly’s crate and let her have at it and she was so happy.

A few weeks before Easter I had found some really big Easter baskets at Target, I think, for $3 and I got one just for the cats to nestle up in. They loved it, which is great, but it didn’t seem so comfortable. I decided to make a big, puffy bed using some leftover upholstery foam, batting from an old pillow and a little bit of all of this darn fake fur I’ve got draped all over the joint!

I’m sure that now that Easter has come and gone, you probably have a few baskets lying around the house, too…

Want to learn how to make an Easter basket cat bed from one left over from the holiday? If you’ve got any offcuts of upholstery foam from past projects stuffing pet beds with them is a great use. Using scissors simply cut the stuff into small-ish shapes. Keep going until you have enough to fill your bed about halfway. We’re going to stuff the bed 50/50 with the foam, which will help the bed hold its shape for a long time, and the rest with pillow fluff that’s a lot softer and cozier to nest into. Double your fabric with the right (pretty) sides together. Well, as pretty as your fabric is. I’m just not sure about this stuff anymore :)

Trace the shape of your basket onto the wrong side of the fabric and add a margin all the way around the original shape that is about half of the depth of the basket. Trim around the larger shape. Keeping the pretty sides together stitch around the outside of your fabric pieces. Reinforce your first stitch with several stitches right together and finish sewing while you’ve still got an opening of a few inches that’s big enough for you to stuff the cushion through. Reinforce that stopping point with several stitches and knot off your string.

FYI – I’m using acrylic yarn and a yarn needle. I straight up had to use a pair of pliers to help me get this gigantic flipping needle through 2 layers of fake fur but I was already feeling kind of yuck and I couldn’t thread a regular needle to save my flipping life and, at the time, this seemed like a totally reasonable workaround:) Turn your cushion right side out and stuff the cushion about 75%. Any more and it’s too puff and not comfortable to sleep on. First place a layer of pillow fluff along the bottom of the inside of the cushion and then begin filling with your upholstery foam chunks. Finish with another layer (as well as you can flatten it out) of pillow stuffing on top. Feel around and make sure the cushion is comfortable. Does it feel too firm? Remove a little bit of foam from the inside. Does it feel too blocky? Add a little more pillow stuffing or Polyfill over top of the foam to make it softer. Finish up by closing the cushion up with a thread that matches your fabric. If using fake fur you don’t have to worry about your stitches being nice because the fur totally hides them! Toss your cushion into your Easter basket and Easter basket cat bed made! Leave it in a common area for your kitties and if they don’t take to it immediately you can always spray some catnip onto the fabric to encourage them to check it out. The catnip just made Maybe super playful and she kept yanking the pillow out of the basket and trying to drag it into the living room. After getting scolded a few times she decided to hang out in the cake pan lid filled with shredded paper Easter basket filler on top of my desk that I put together for the cats earlier in the week to hang out my feather duster she stole. Because feather dusters never say no.  And what cat doesn’t want to sleep in a cake pan lid filled with green paper? p.s. the cats will hiss and bat at each other over who gets to sleep in this silly looking thing so don’t judge, ha! In all honesty, nobody has taken to it quite as well as I had hoped but Marla did eventually check it out. In all fairness the one kitty that I figured would flip, Marla, here, is sick so we’ll give it another go after she’s had some recuperation time. In the meantime, I think we’ll just head back to my big king-size human bed where my girl pets can slip up next to me while motorcycles rev off the TV :) I'm a crafty cat lady with big dreams and an inability to sit still. I make it, I live it, I love it. Here at Dream a Little Bigger you'll find lots of inspiration for crafts, crochet, DIY, food, pet life and all things rainbow. Lots and lots of rainbows.
102 Shares
Pin102
Share
Tweet
This site uses cookies: Find out more.