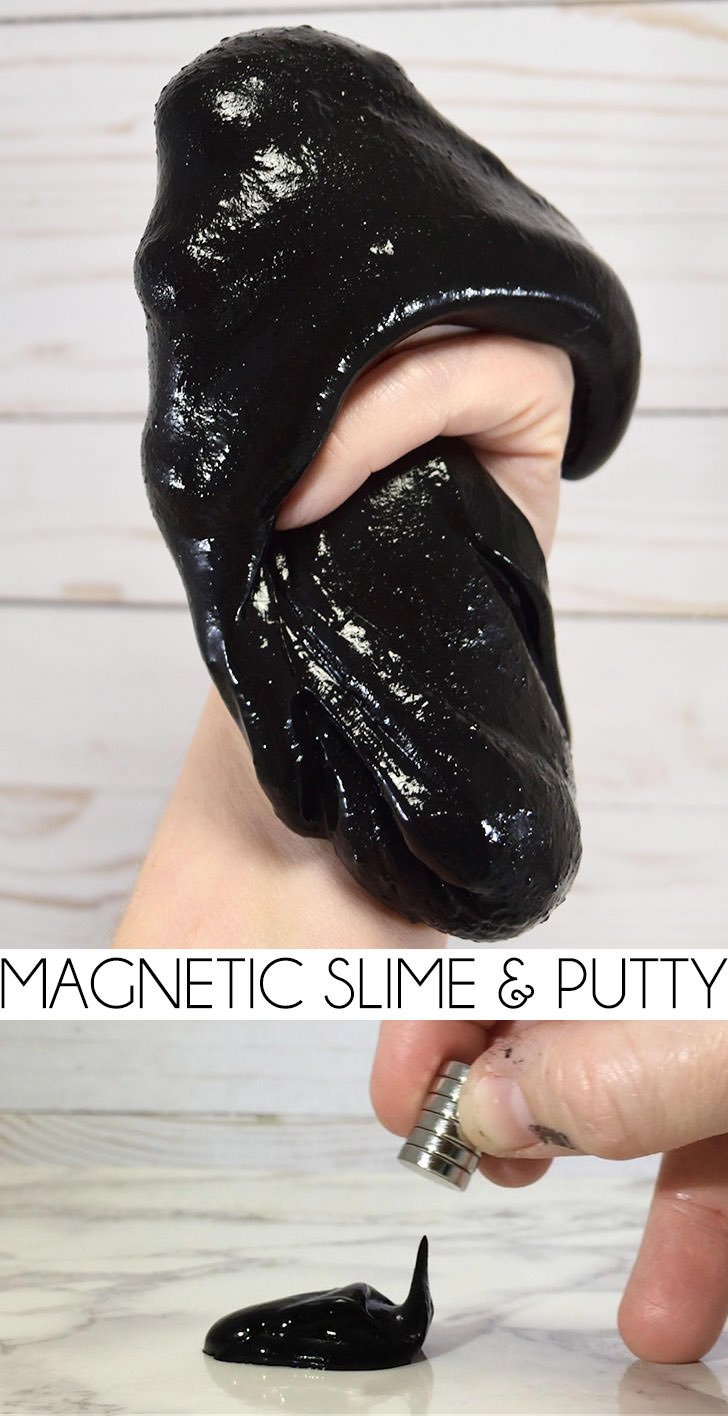 People have always been telling me that I would grow out of things and some things I did. I’m no longer afraid of the dark but I still hop into bed just in case there is a bogey man under there. Another of the things that I have been told I should have outgrown by now is my sweet tooth and insatiable love of candy. Literally, as I write this I’m working on a cotton candy lollipop Rob scored for me at the gas station. That dude really gets me :) I also have a package of bloody worms on my nightstand that I’ve been working on before bed the last few nights! My sweet tooth is active all times of the day!

Also on the list of things I haven’t grown out of include getting excited at just about every cat or dog I see, running in place and talking in a very high voice when I’m super excited, playing games and playing with putty and slime. These are all things I still love and now that I’m in my thirties I think I can safely say that I’m going to be that crazy octogenarian running in place while squealing about a dog that’s a football field away from me. That’s if I can even still see that well :) 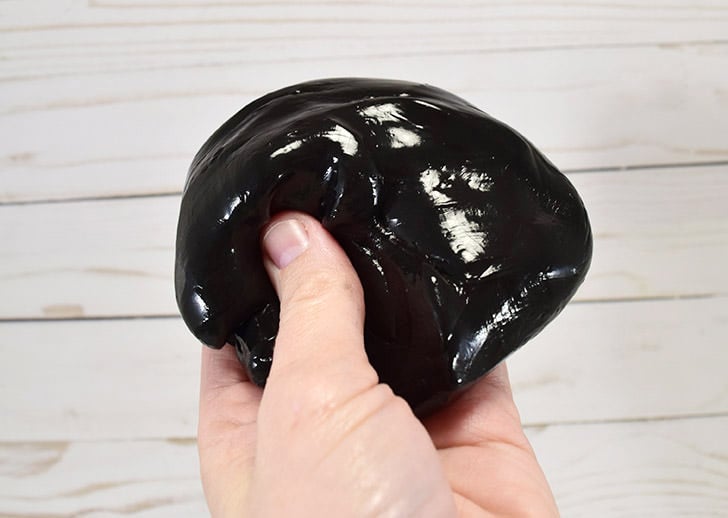 Now I made some play putty last week and showed you how to make it with a tutorial. It’s super fun stuff. It’s firm and is a lot like Silly Putty. In fact, you can even pull newsprint off of a newspaper onto the putty after it’s cured a few days. Putty is nothing like slime that oozes and drips through your fingers. In my personal opinion, both forms totally have their place in life!

Today I’m going to show you how to up the ante with your DIY play putty or homemade slime and make that business magnetic. Say what? Yessiree Bob, we’re making magnetic slime and magnetic putty with a supply you get at an art store and it’s going to be dang fun, I tell ya! But before you get too far into this idea this is the type of project that is better for older children. If you worry about things going into your kid’s mouth this is NOT the putty or slime to be playing with at this time but pin it for when they are old enough and do it later! (more below on the potential dangers of the magnets used to play with this stuff) 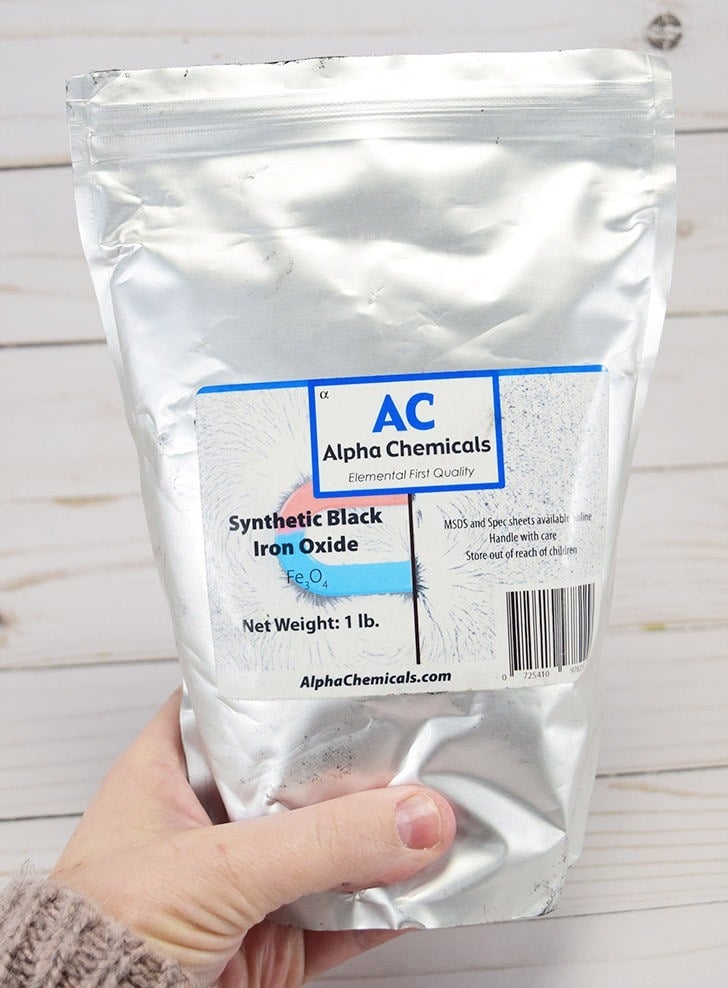 So this is what makes our stuff magnetic… iron oxide. Now this stuff has a lot of uses including a pigment for artistic purposes (like ceramics or making your own paint) and is used in cosmetics and homemade fertilizer. Now this stuff is bad, bad, bad to inhale so please take proper precautions when using this stuff. For me that meant using it outside with fabric across my nose and mouth to prevent accidental inhalation. Do what you think is best and don’t have the kiddos help making magnetic slime or putty to be safe. 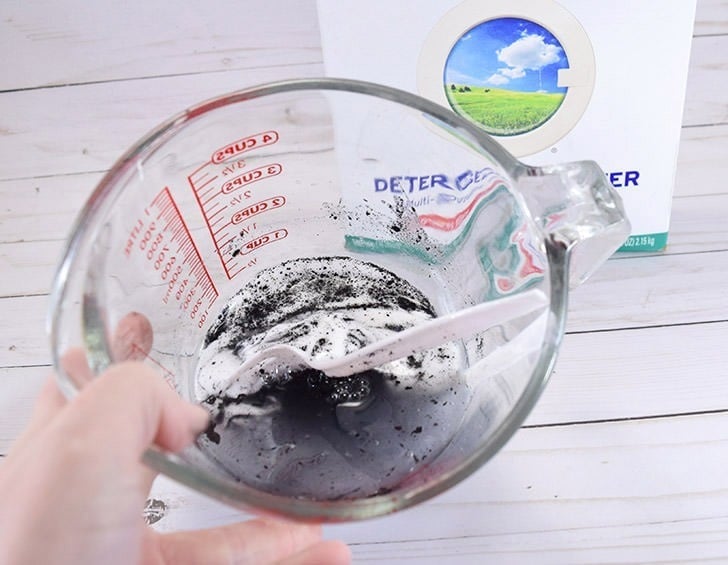 For play putty and slime using one 4 ounce bottle of Elmer’s School Glue you’ll need 1/4 c. of iron oxide to make it magnetic. Add it your glue solution prior to adding starch or Borax solution and mix well enough to create an even, black color to your mixture.

The first couple of times you touch your putty or slime to knead and get into shape some of the black is going to come off on your hands and it kind of stains. It’s pretty easily washable except for tricky areas like around your nail beds. If you’ve got some place to be that isn’t within the walls of your own home you might want to don gloves just to be safe.

After messing around with the stuff a few times the black coming off doesn’t tend to be as much of a problem though I was surprised when it once left a black smudge behind on my desk after many days of nothing like that happening at all. As such, be sure to keep the kiddos away from unfinished wood, upholstery, carpet and just about anything you don’t want stained. I’d strongly suggest playing with your magnetic fun on an easily washable table just to be safe. 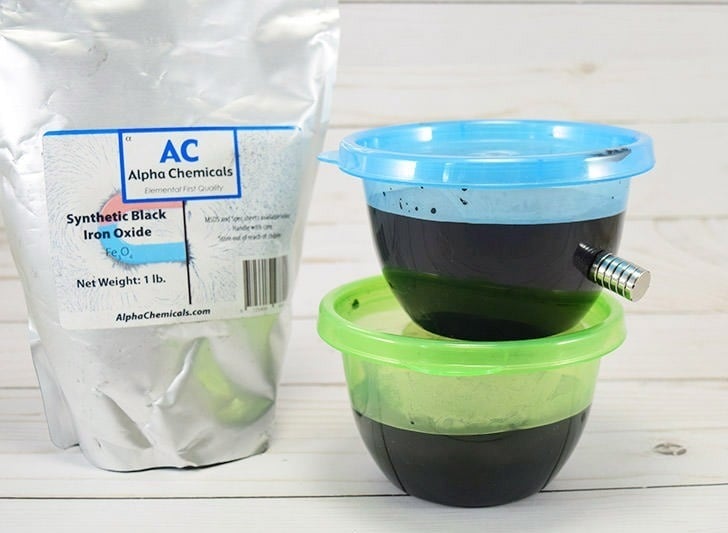 Most of my play putty and slime batches I keep in sandwich bags because it’s cheap and effective. In fact I just checked and I have 13 batches of experimental stuff I have made all in sandwich bags and doing perfectly well in my desk. While I was messing with my magnetic stuff quite frequently I kept both the putty and slime in tubs just because it’s easier to access to play with. 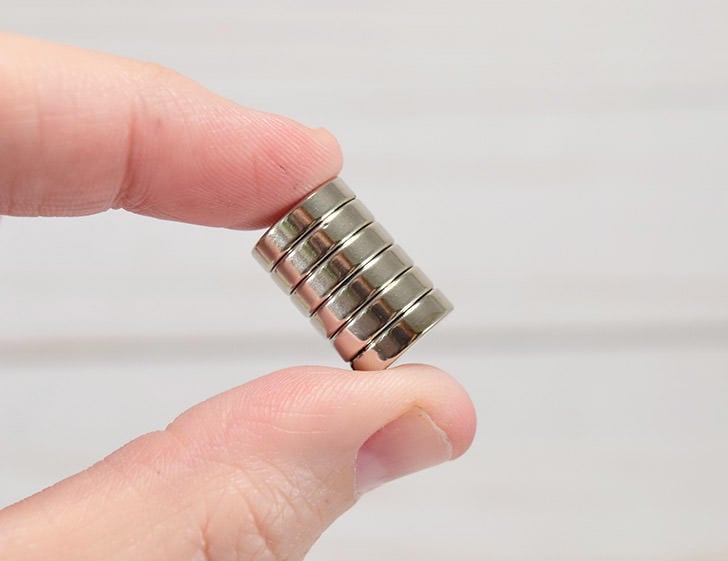 To play with your magnetic business you’re going to need CRAZY strong magnets. I’m telling you the business on the fridge will not do a darn thing for you. I tried just to see and it just doesn’t have enough pull or whatever. These itty bitty magnets are neodymium and that basically means stupid strong. I got mine at the hardware store where they only came in sizes of small and smaller. There is a very serious risk of children swallowing these super strong magnets and they wreak havoc on little bodies. This is a nasty emergency room trip, guys, so make sure your kiddos are old enough that putting magnets in the mouth won’t be a concern. Another thing worth considering is that the magnets can pinch the living daylights out of you because the attraction is so strong they’ll fly together and when your skin gets in the way it hurts. For that reason I just used my magnets how they came straight out of the package and all stuck together.

And on another safety note (geez, are you getting freaked out, yet?) if you have a device in your body like a pacemaker, or like I had for ages a neurostimulator, you might want to pass on this as the magnets are bad news for these very expensive and very necessary medical devices.

So if you’ve read all o f the warnings and have decided this project is all green lights ahead I’ve made a little video to show you how the putty and slime will react differently. So check that business out if you’re not sure which you want to make first.

In truth my favorite is the magnetic slime and I’ve clocked HOURS playing with mine. Unfortunately I dropped mine on the floor so it’s kind of gritty here and there but it’s still lots and lots of fun to play with! Both the putty and slime are lots of fun but the way the slime tendrils and climbs is just too awesome to pass up for me. Be sure to check out that video to see what I mean and tell me if you’re making one or the other, or heck, even both ’cause I want to know all about it! 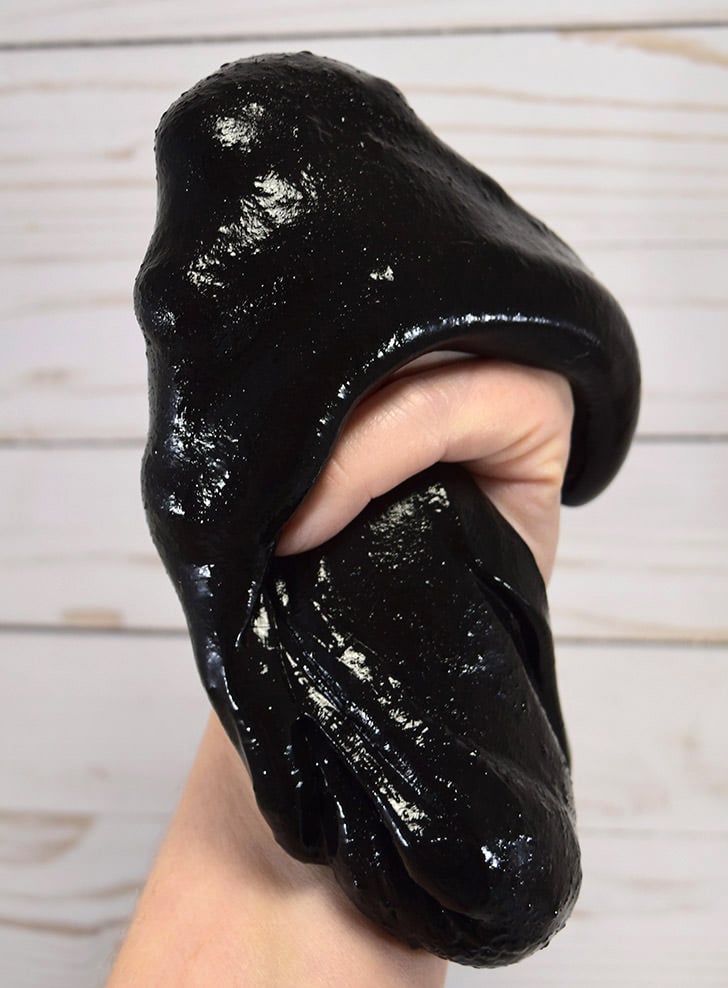