Who doesn’t like playing with slime? It’s fun stuff. It’s kind of grody but super awesome at the same time. It slips through your fingers and contorts to all sorts of interesting, goopy shapes. I don’t care if you’re a kid or not, if you’ve not played with this stuff you’re missing out.

I remember getting similar stuff as a kid. They were made by Nickelodeon back then and I remember it being kind of a pricey thing. I want to say like $6-7 for a little tub but perhaps my memory isn’t accurate on that one! In the end a brand new little cup of slime, be it pink or green or any other color under the rainbow, eventually got filled with little short Boston terrier hairs and lint and all sorts of gunk that made it too grody to actually play with.

I guess that’s why I love the idea of DIY version. This is a HUGE amount of slime. Far more than I ever got out of an expensive little pot as a kid and it will only cost you around one cool buck. Boom. Check that business out. AND you can  make it in any color and add glitter or table scatter or any other number of things for even more fun sensory play. I do have to say that I’ve had SO MANY fails with this this week because I was trying other recipes. I ruined FOUR bottles of glue this week trying to get these other recipes right and it didn’t work. I’m sticking with the old tried and true Borax slime recipe here but feel free to look around for other options that use starch and clear glue and whatnot but I can’t guarantee they will work because I couldn’t get it to for me :) 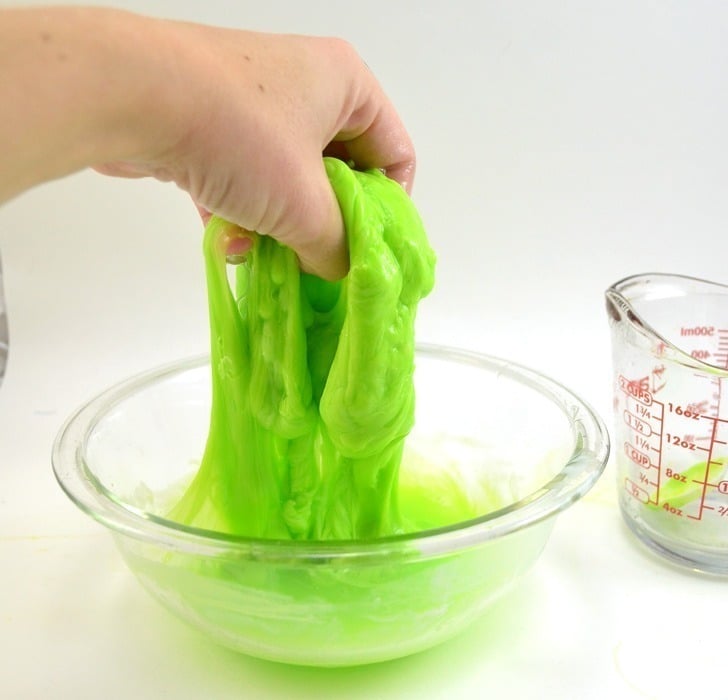 And since it’s Halloween I thought it would be nifty to make a jar of Frankenstein’s phlegm right off of a mad scientist’s shelf. Now I know that the monster isn’t actually Frankenstein, that was the mad scientist who created him but I also know that we all call that green guy with bolts in his neck Frankenstein. So if you’re a stickler for the details no worries, I know what I’ve done and I knew it going into this :)

At any rate, let’s rock out this homemade no fail slime recipe, shall we? 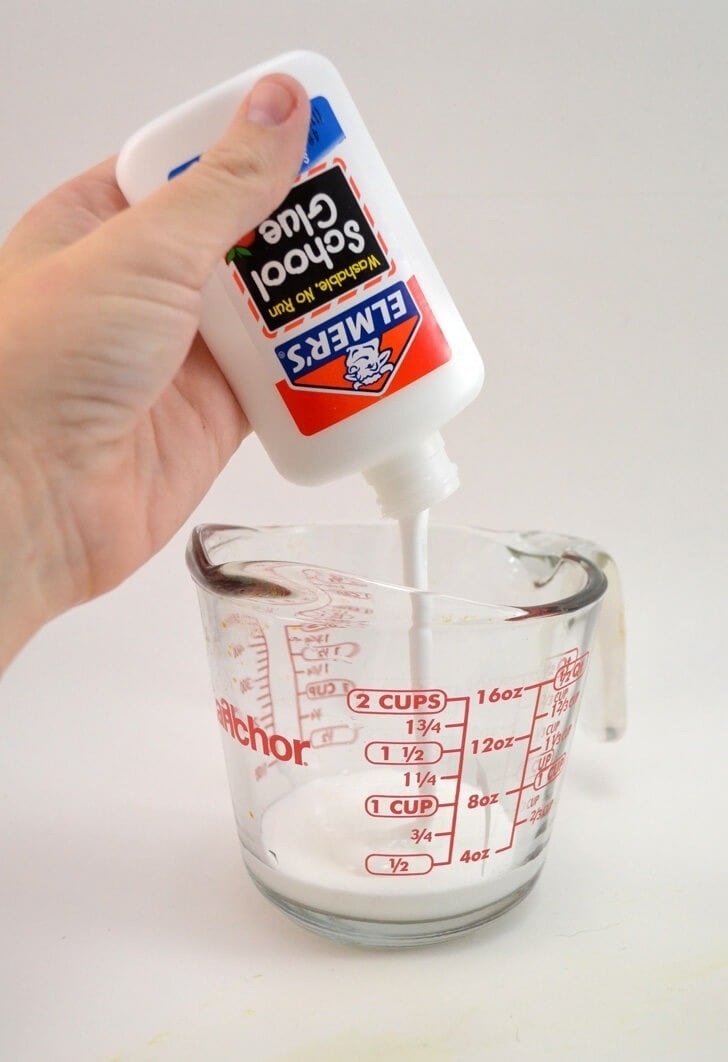 I’ve tried using discount glue and I haven’t had success. I can ONLY recommend Elmer’s glue because it’s all I have found that has worked for me. Empty the entire 4 ounces of glue into a bowl or a measuring cup. If you have a crafts only measuring cup that’s awesome and if you craft enough I totally recommend it. 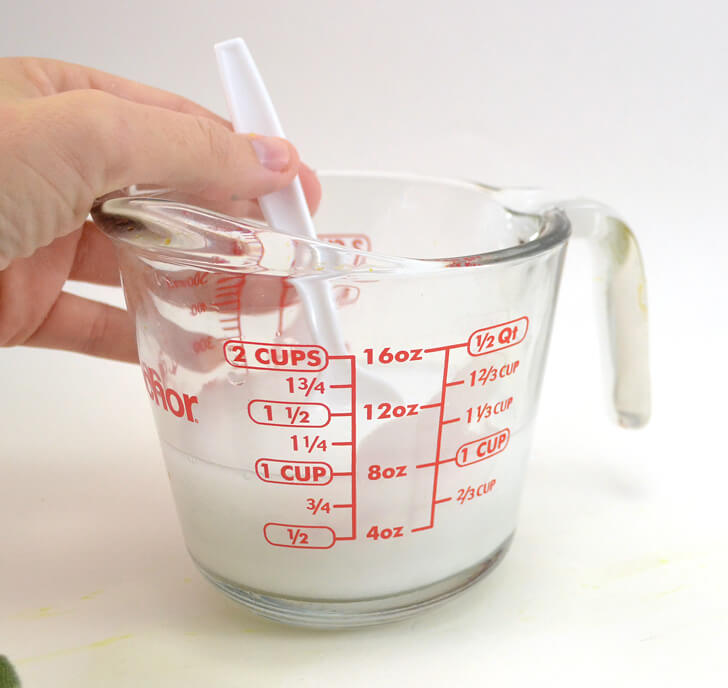 Fill your glue bottle up with water (4 ounces) and pour into your glue. Mix together well. 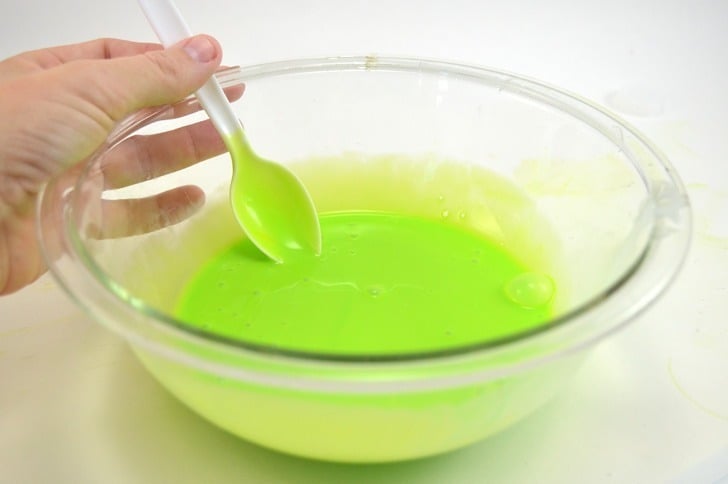 Add your coloring to the perfect phlegm hue (we used about 6 drops of yellow and 1 green) and mix well. 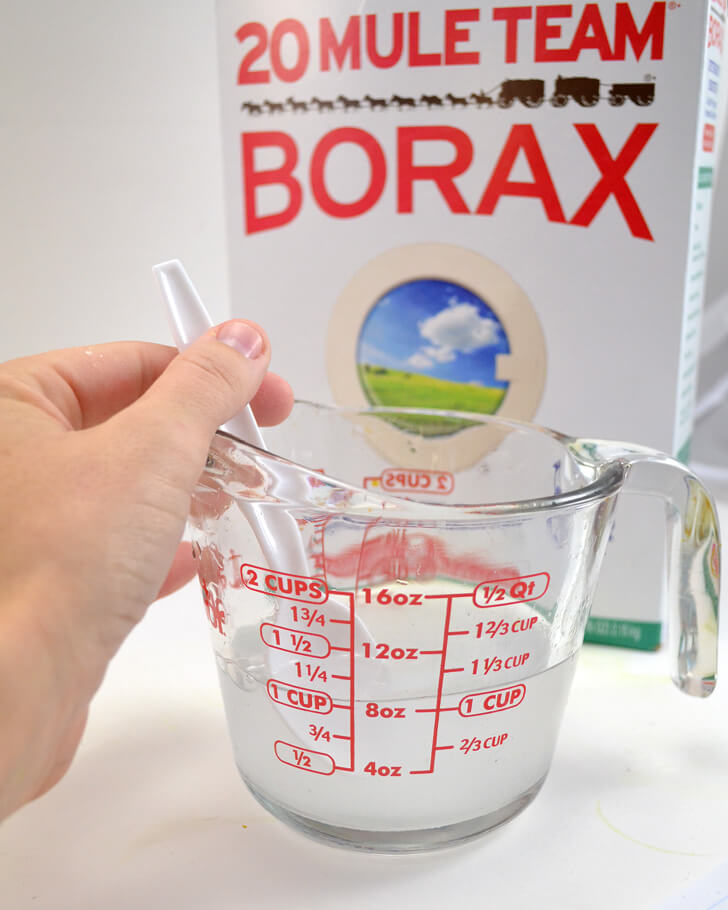 Mix together 8 ounces (1 cup) of water and 1 teaspoon of Borax SEPARATELY. 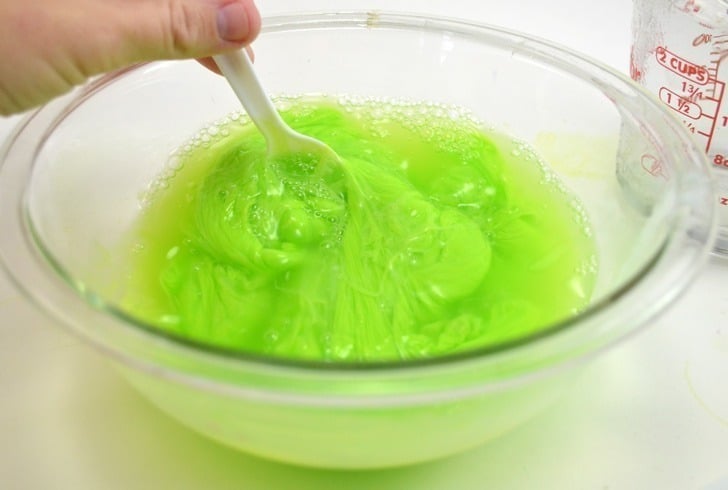 Slowly pour the borax solution into the glue mixture while stirring. You’ll see the texture taking shape right in your eyes. It will look kind of stringy at first and then it will get lumpier and take up more of the water solution in the bowl. 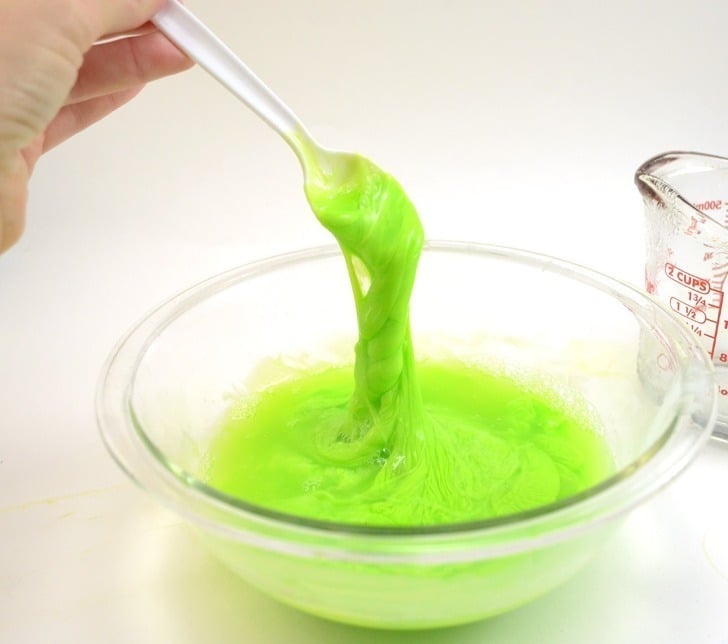 At a certain point the slime won’t take on any more of the water.

Remove your globe from the water after it seems to quit taking it on. 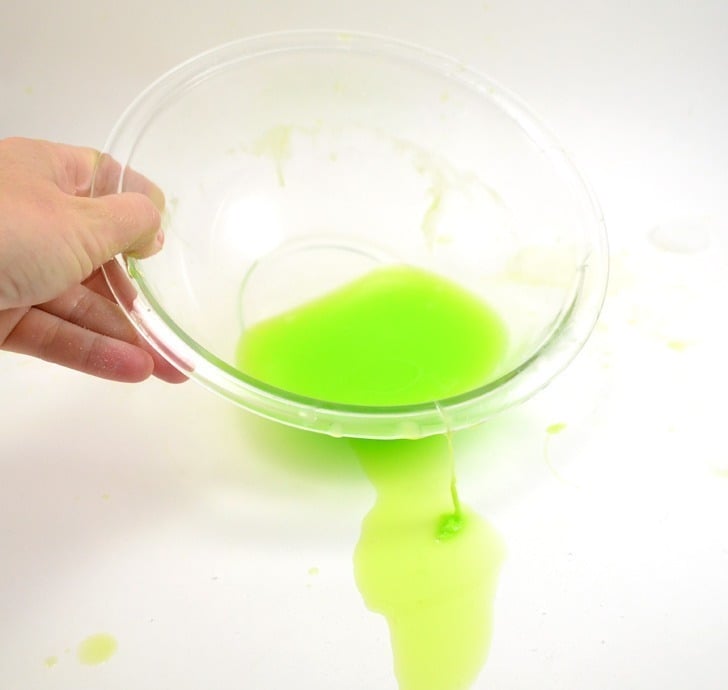 YOU WILL HAVE EXCESS WATER THAT YOU NEED TO POUR OFF. I’m saying that in caps because the first time I tried to make slime I desperately tried to get all of the water to work into the slime. Why else would I use a cup of water if it only takes in 3/4 cup? But that’s why… it won’t all get sucked up into the slime. 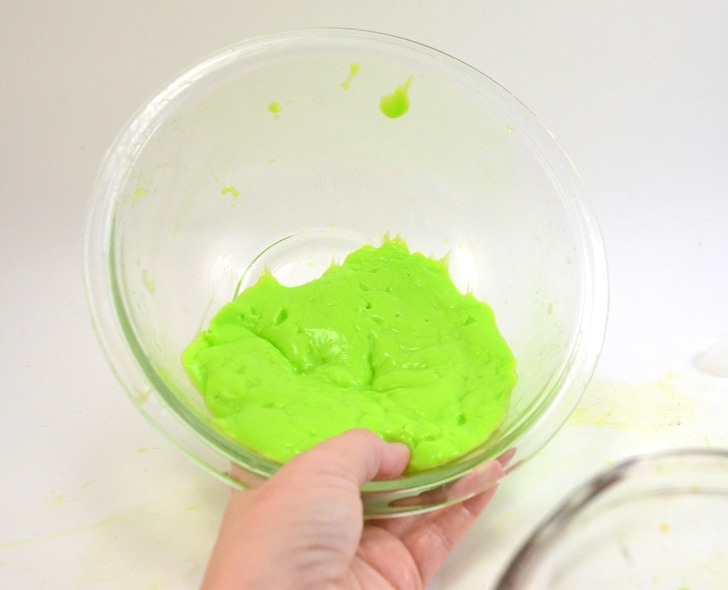 Right now you might notice that the texture is weird. You can knead it until it’s got a good texture or you can leave it… 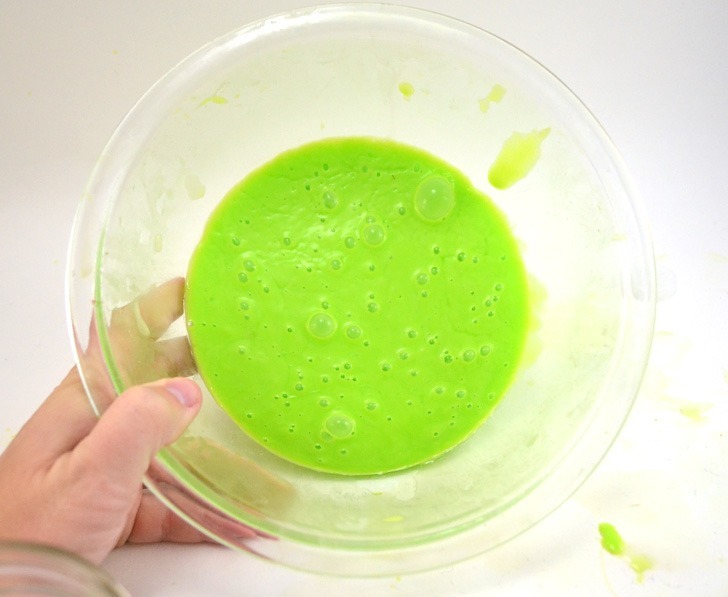 …and come back in about 10 minutes to the perfect texture. Nifty! 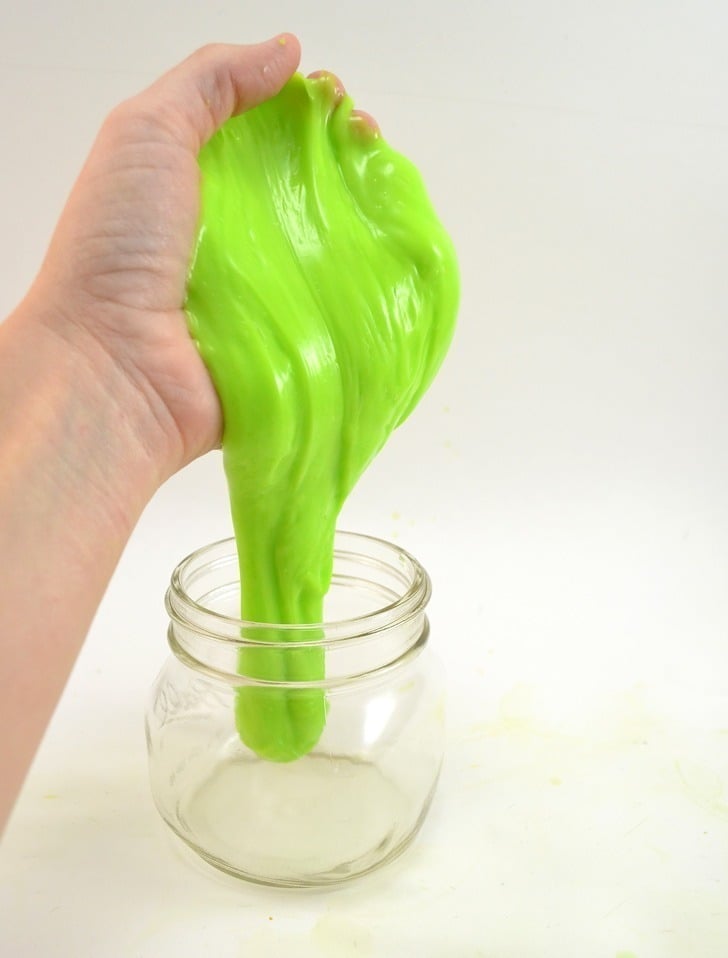 Toss your homemade slime into a jar, vessel or plastic tub to keep it fresh. 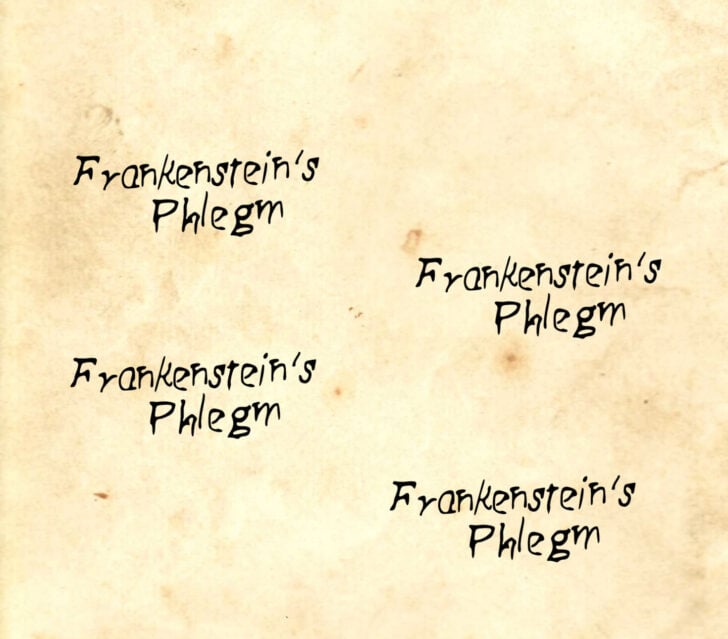 If you want to label your slime with a mad scientist’s writing on aged paper print out the image above. You can right click to save the size you see above or left click and save an even larger size that will pop up in a new window. Print it off… 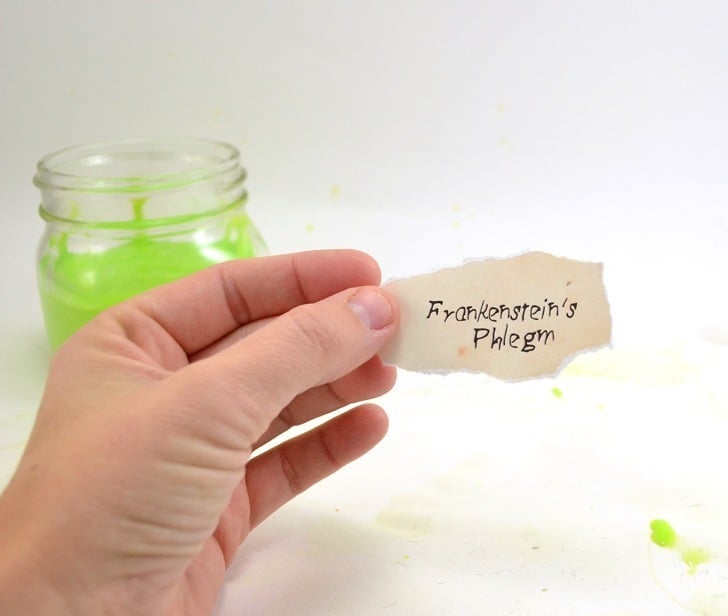 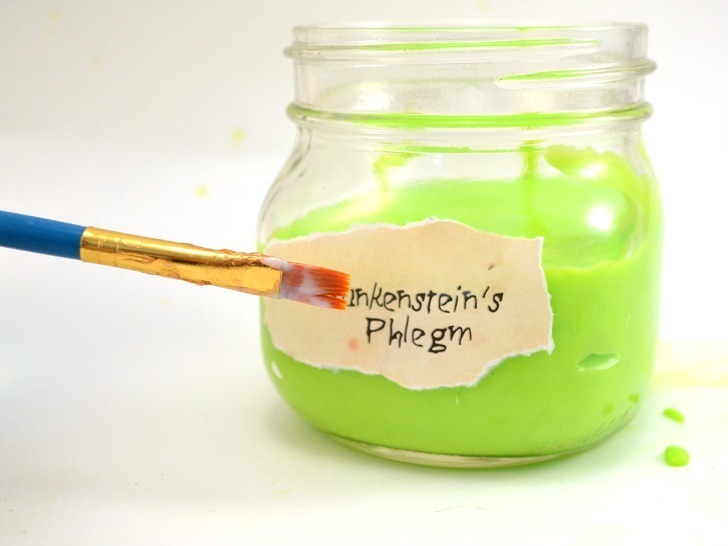 Glue that business onto your jar, I used Dishwasher Safe Mod Podge so that it will last grody hands and wet conditions for longer, and seal it off with a top coat. 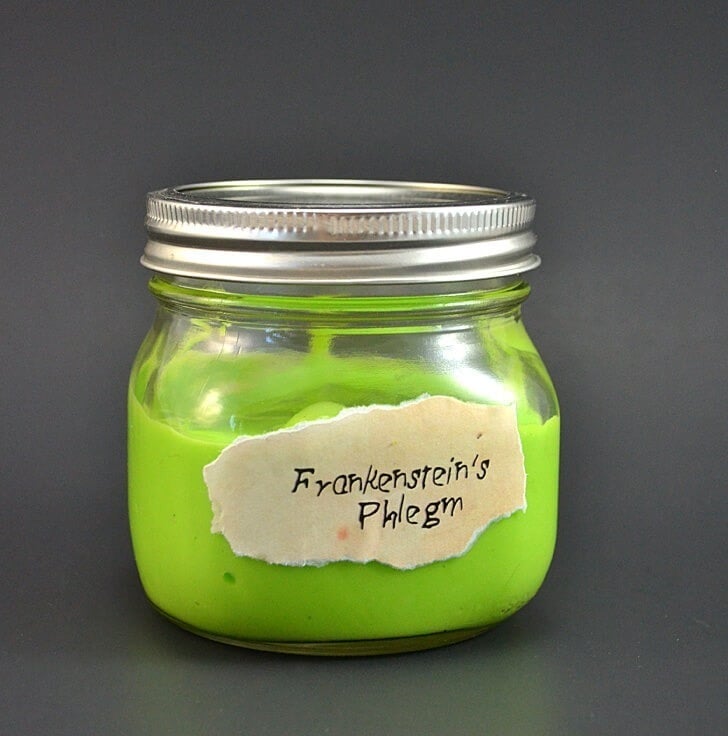 Isn’t that so cute? If you can round up some baby food jars  you can make a super inexpensive and fun little party favor. Or if you’re looking for the perfect craft to keep the kiddos busy since they’re surely be wigging out ALL DAY LONG on Saturday wanting to go trick or treating this will keep them busy for quite some time! 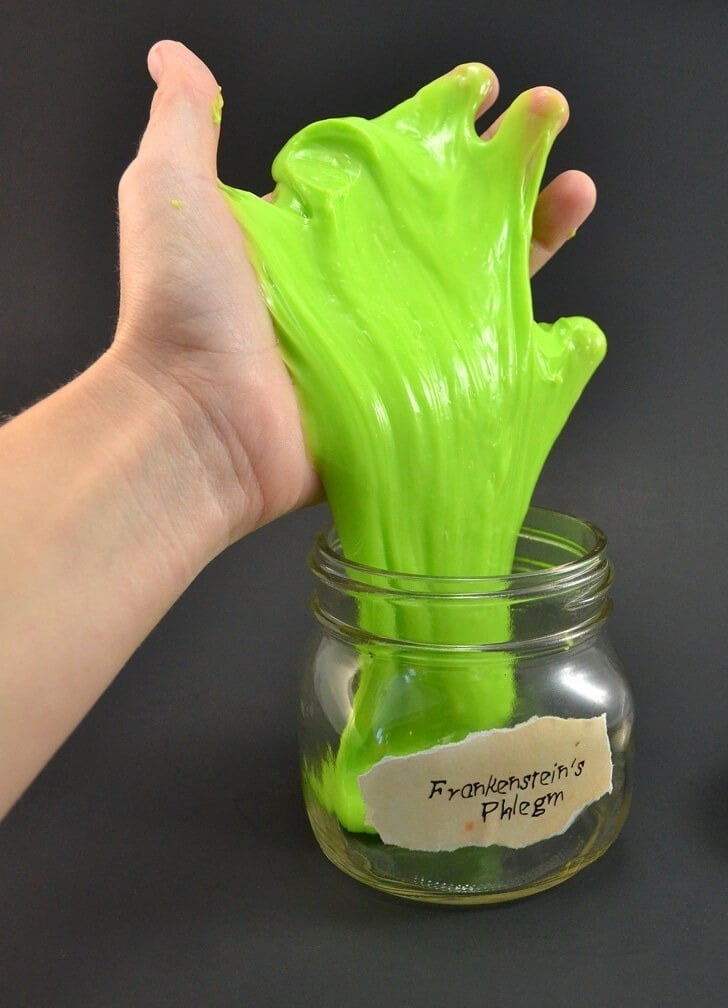 I'm a crafty cat lady with big dreams and an inability to sit still. I make it, I live it, I love it. Here at Dream a Little Bigger you'll find lots of inspiration for crafts, crochet, DIY, food, pet life and all things rainbow. Lots and lots of rainbows.
4.0K Shares
Pin3.9K
Share12
Tweet
This site uses cookies: Find out more.