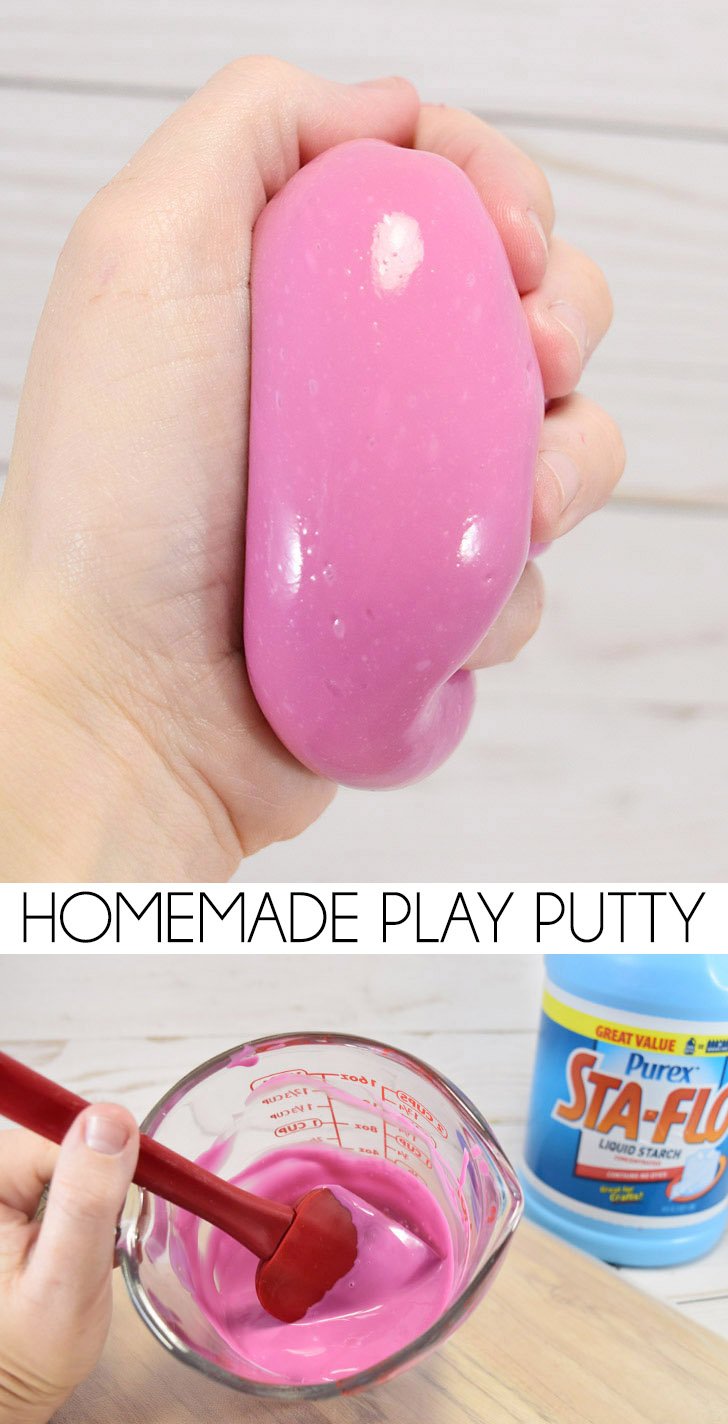 So the other day my computer decides to go haywire. I literally use this machine for pretty much work only. I use Adobe Photoshop, Premiere, Illustrator, Silhouette Studio, an image compression program and the internet. Seriously. That’s it. I’ve removed all games and whatnot because I just don’t want them or need them. In December my computer also went nutso and the thing was only 6 months old. After chat tech took over my computer and remotely fixed things he suggested that I could purchase a support package because mine was running out so I could still get help like this when needed.

I was convinced to buy it though I didn’t really want to. In the end it turned out to be a great, great thing because less than a month later, BOOM! computer nonsense is hitting the fan yet again. I spent THREE HOURS with HP chat support who kept telling me that I needed to hire a special tech person for a nominal fee (I quickly looked online to see it was $99, um, that is not nominal to me). Though he kept telling me why he couldn’t help me I kept asking what did I pay for in my service package and asked just how the exact error message I gave him occurs. When he finally looked it up he realized it wasn’t an Adobe problem, but a system issue. In the end I didn’t back down and he took control of my computer and checked on my bios and drivers and all of that business and fixed it. Yep, the guy who wanted to push me off on somebody else actually could take care of my issue. This dude took AGES to get back with me and I was frustrated. Since I was staring at a screen for THREE HOURS I wound up making some homemade play putty while I waited. ‘Cause, I might as well get something out of this time, right? 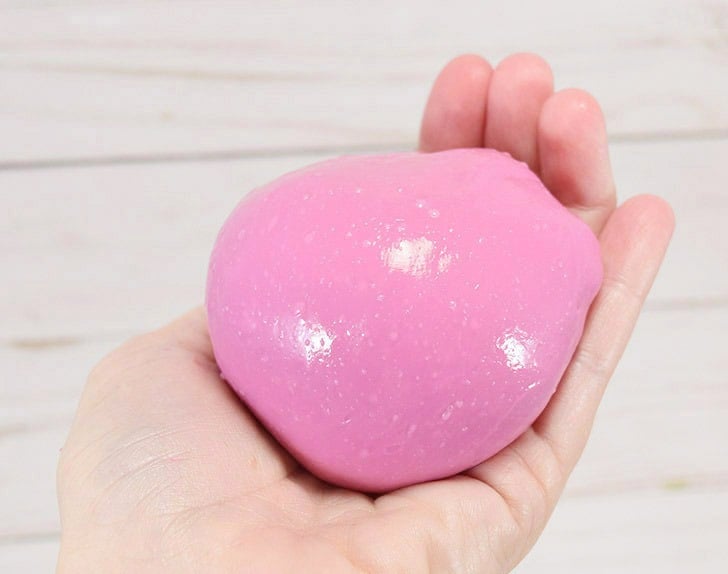 Homemade slime and putty are, like, the coolest things to make at home. Whether you’re keeping the kiddos entertained or if you’re in your thirties and are doing this all on your own, this project is fun, easy and takes only 2 ingredients. In all truth it is very similar to slime recipes but the slight variations make a huge difference in the texture and viscosity. Want to see how it’s different? 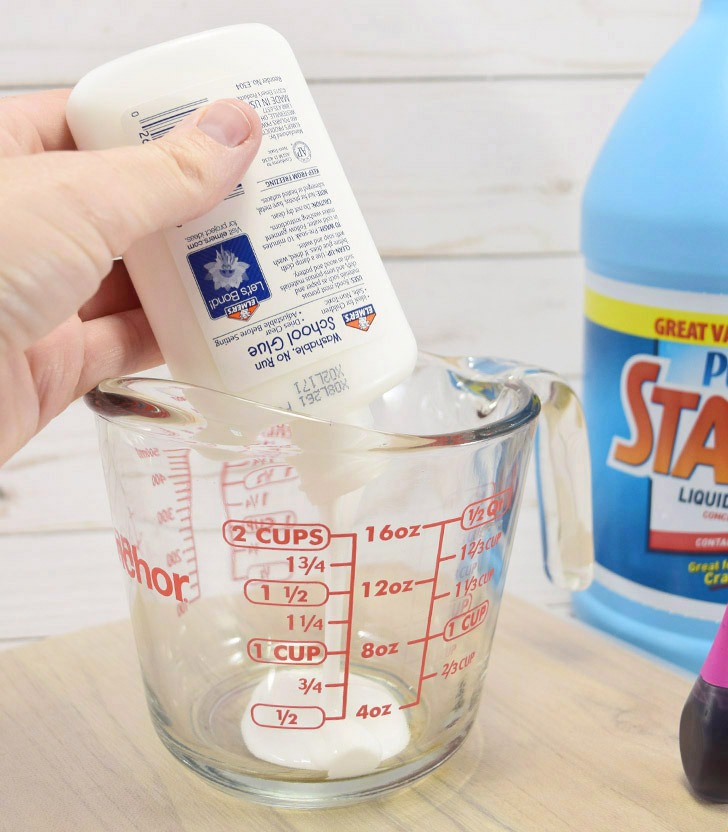 The ratio for homemade putty is 2 parts glue to 1 part starch.

I like to keep things simple so I use a full 4 ounce school glue bottle and 1/4 cup of starch. This easily makes enough play putty to split between 2 kiddos or uses. 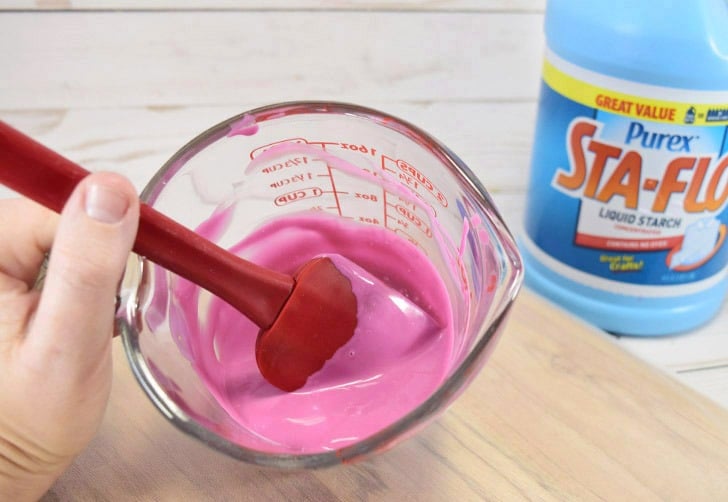 To get started pour your glue into a bowl. I prefer to use a 16 ounce (4 c.) measuring cup for my little craft projects like this. Add food coloring to tint your putty,  if you wish. Go a bit heavier than what you want the color to be. As you work the putty it does little up a smidge. 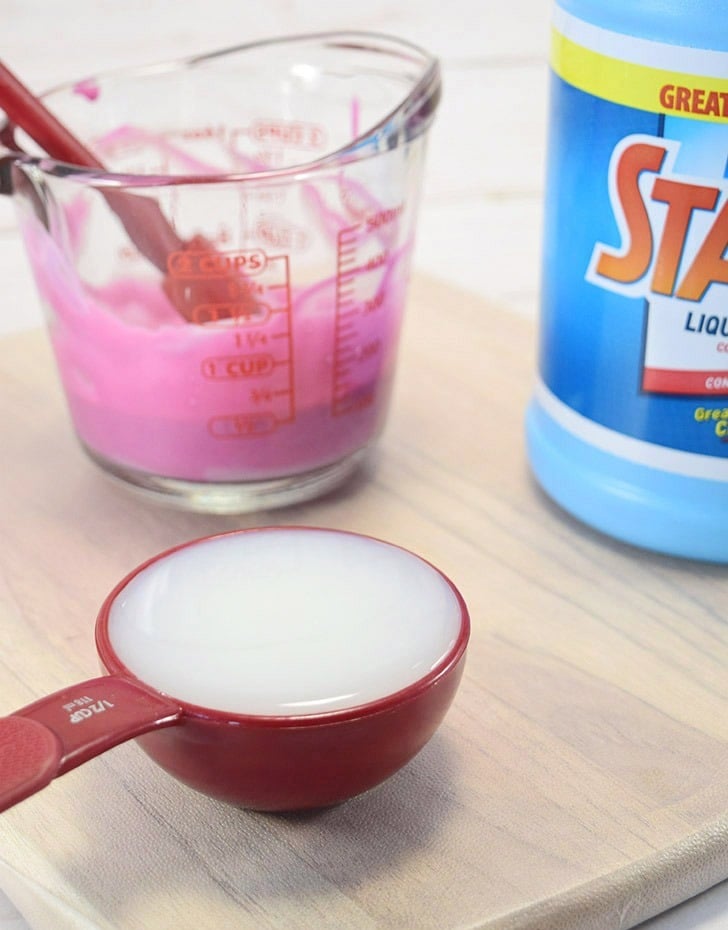 Measure and add your liquid starch to your glue. Remember, the ration is 1 part starch to 2 parts glue.

Now, I apparently cannot read because I should be using 1/4 cup rather than 1/2 cup. I sat there forever trying to figure out why my glue wasn’t taking in all of the starch. Boo. If you also add too much it doesn’t ruin anything, it just means you waste perfectly good starch. 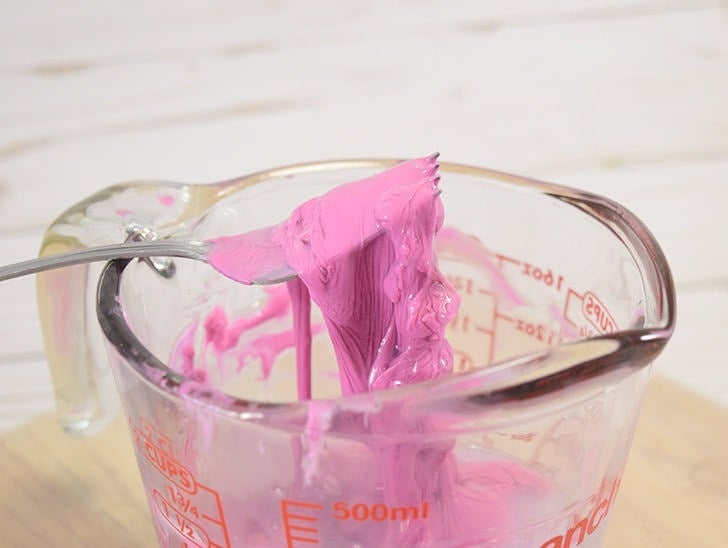 Stir your mixture up and it will begin to thicken up into a weird snot-like ball of stuff. It’s pretty grody. 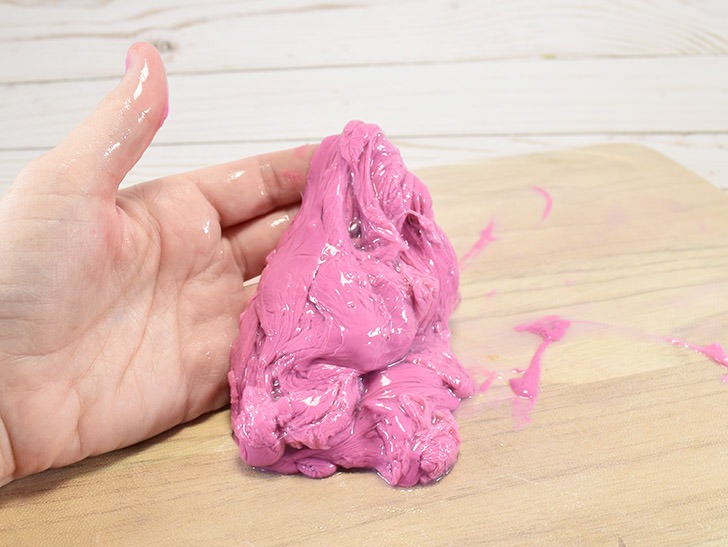 Remove your blob and place it on a protected surface. I’m using a wood cutting board covered in Press and Seal <— this stuff can be a crafty godsend. 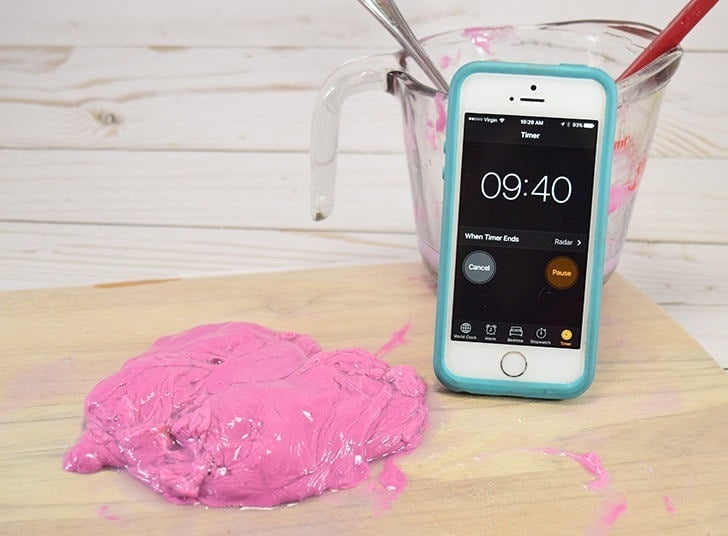 Now I find that I typically have to knead my putty around 10 minutes for the best texture. 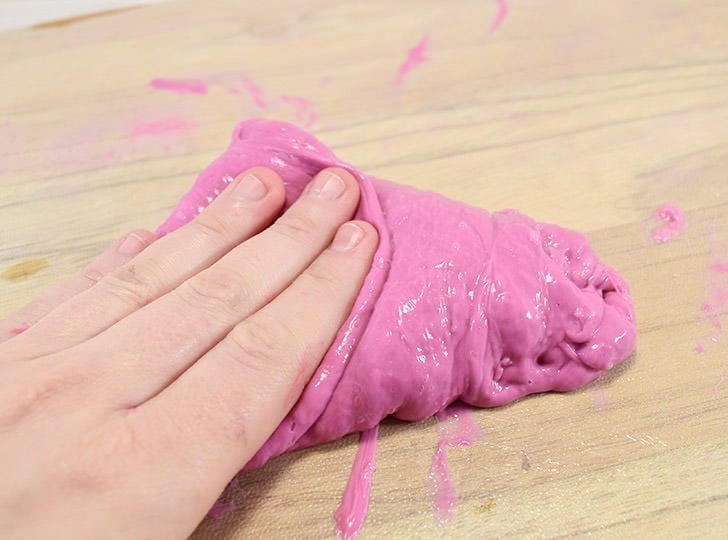 Knead the junk just like you would knead bread turning it into itself over and over. It might be sticky at first but that will go away within a minute or 2.

This kneading is hard work, for real! Or maybe I’m just an out of shape wuss! Completely accidentally I found that if you let the putty rest about 5 minutes in and then come back you get a really awesome texture in the end. 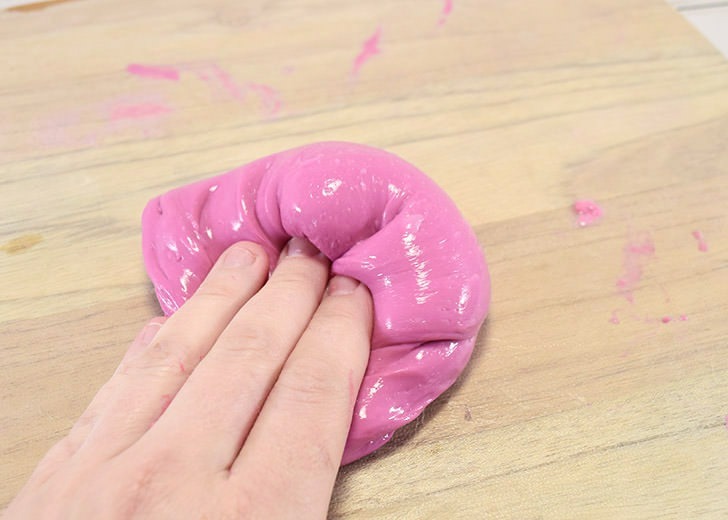 As you work the texture visibly and physically changes. 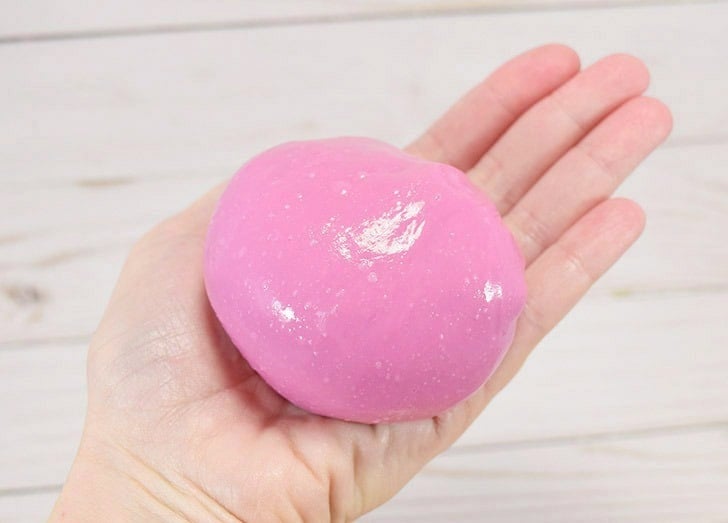 Once happy with the consistency play with or place in an air tight bag or container.

Keep until it gets all nasty and filled with cat hair or Cheerios, or whatever :) and then just make another batch. Easy peasy. And don’t forget, slime is a pretty awesome project, too. Check out how I made Frankenstein’s Phlegm (a.k.a. homemade slime) right on over here. 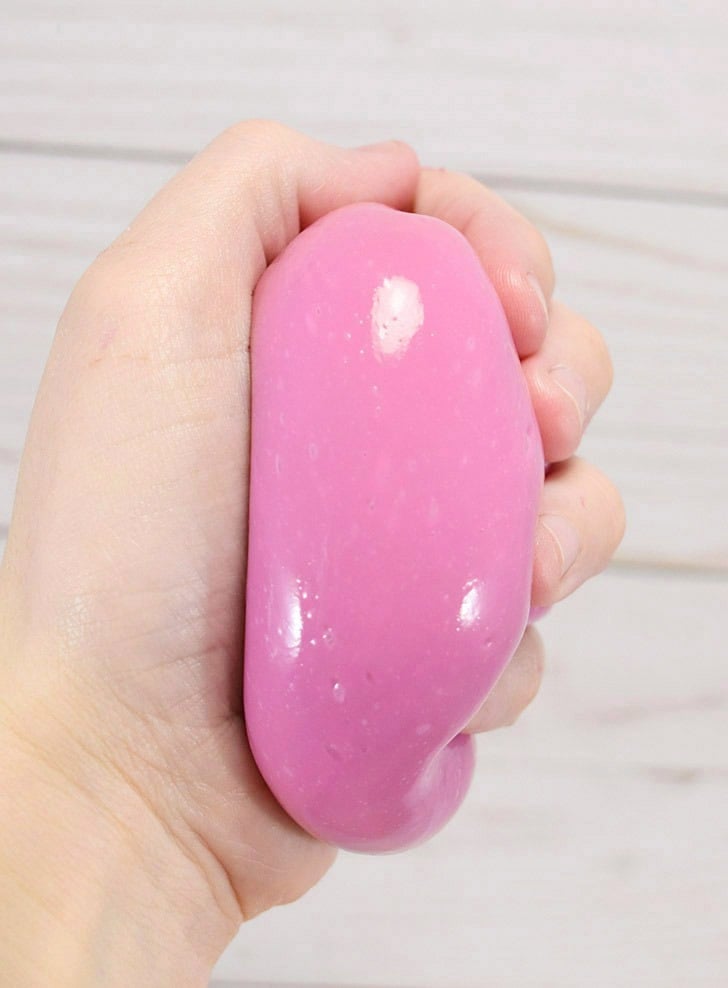