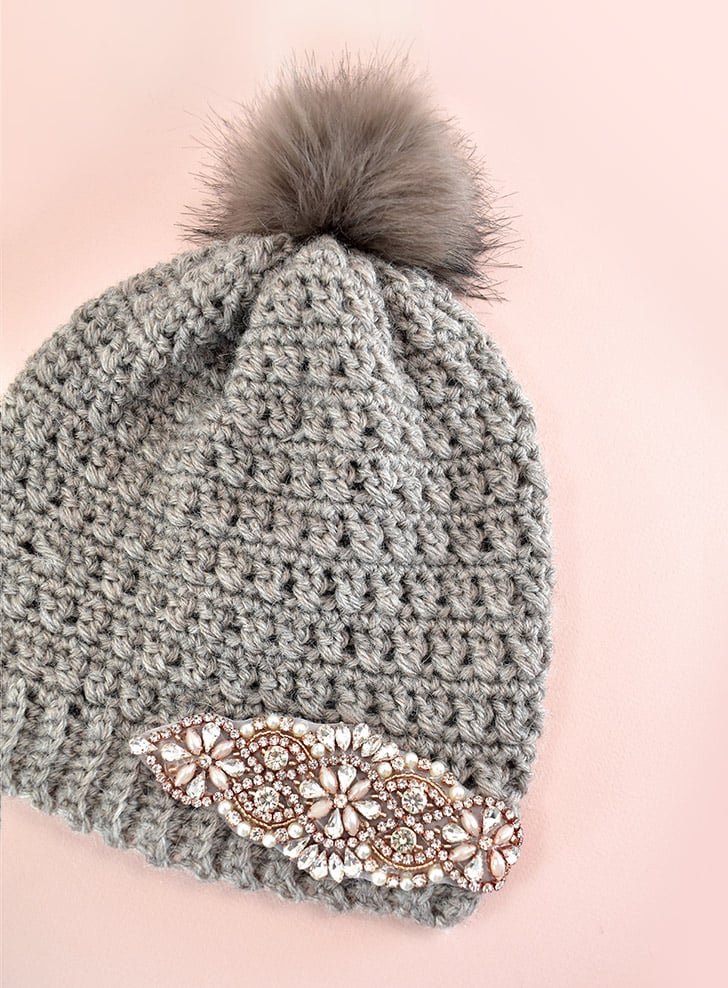 I don’t know what it is about cold weather but it makes me want to crochet. During the winter storm Uri I whipped up a bold graphic crochet beanie that I just love. But today I’m sharing something a lot more soft and dainty. Something truly feminine.

It all started with a really pretty rhinestone applique I found on Amazon. Straight up, my first thought was that my sister would LOVE that applique. And so I bought it with no clue what I’d use it for. But then I got into a crochet frenzy, wanting to hook up all the things for all the people.

Even though the rhinestones weren’t expensive, I still didn’t want to plonk that gorgeous-ness down on some cheap acrylic yarn.

And so, for the first time, I purchased Lion Brand Touch of Alpaca. And, guys, I’m a fan. It’s a really nice yarn that’s very consistent. I didn’t encounter a single knot in either skein as I worked up these hats and I was pleased with the texture. It’s soft enough to be nice to touch but not so soft that your crochet fabric is floppy. 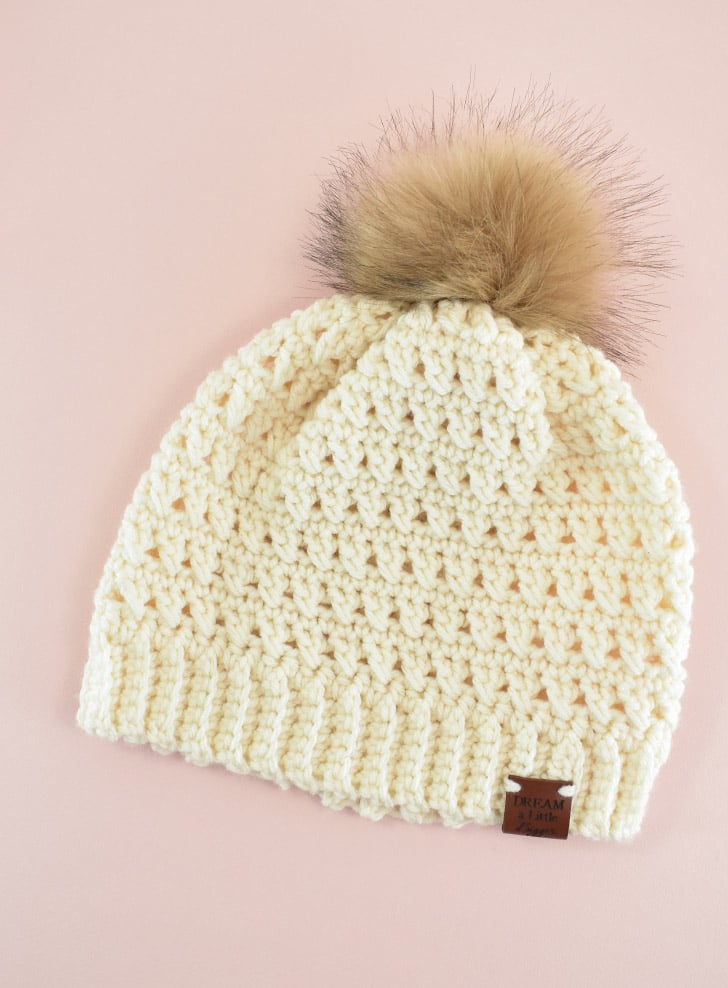 And while I was working up a hat specifically for that fancy applique I decided that the hat itself needed to be simple. I didn’t want some crazy design to compete with the shiny stones and glitz of rose gold.

I love that this hat has a simple but lovely design that really elevates the pattern and works well with a little bit of glitz on the brim. While this beanie may look difficult to make, this crochet hat pattern is perfect for beginners. If you can single crochet and double crochet, you’re rocking all the skills you need to make this surprisingly simple crisscross beanie.

I used Lion Brand Touch of Alpaca in Taupe or Cream. The applique I found at Amazon where prices tend to fluctuate quite a bit. Keep your eyes peeled or use Honey to find out when the color/style you want is offered for the best price. 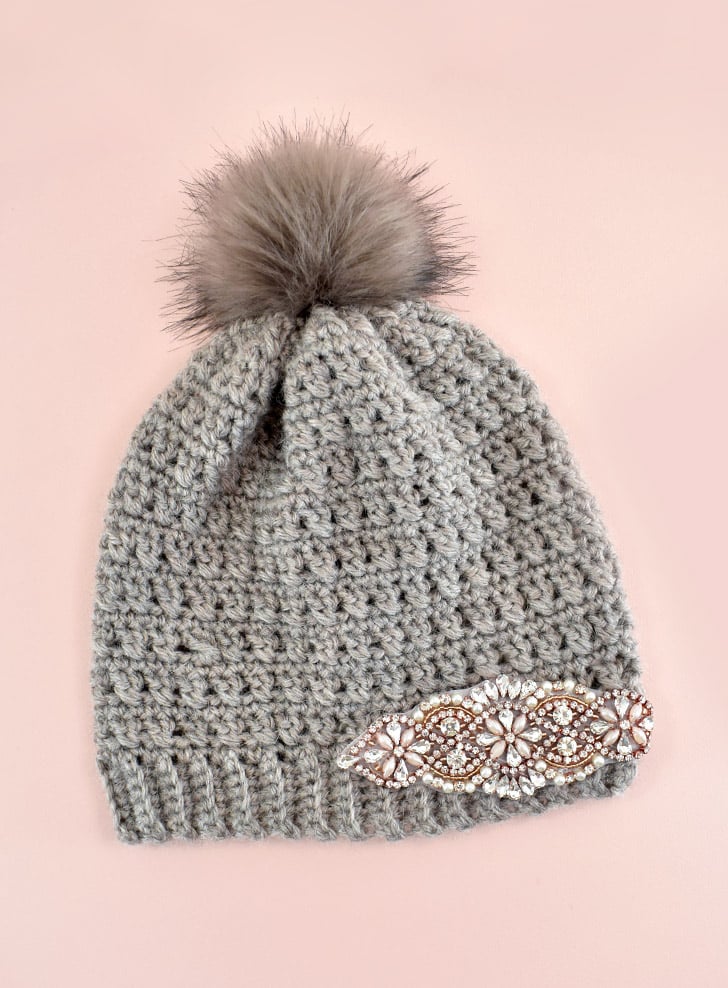 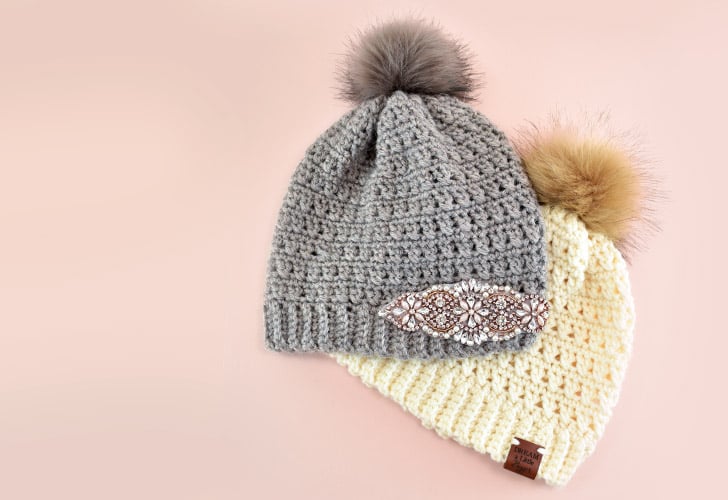 This crochet hat has a very thin stretchy band, much shorter than what I would normally hook for a hat. This thin bad works extremely well for adding the applique. However, if you are using a leather tag or leaving the brim unadorned, it still looks super cute.

Chain 1 and then align the ends of the band making sure it does not twist. Match up the stitches of both ends and slip stitch the sides together. For more detailed information please visit this post.

Measure hat. If from the bottom of the brim to the top of the hat is 9-10″ seam your beanie closed. If not, repeat round 17 until length is achieved.

After the last round tie of your yarn leaving a 4-6 inch tail. Thread through a  yarn needle and stitch the top closed, then weave the end through the inside of the hat. Repeat for the tail at the beginning of the hat.