It’s amazing to me how crafting and DIYing can turn my entire world around. I was upset because the night before, about an hour in, I realized that I had worn a dirty dress to a party. The bbq sauce from the previous party I had worn it to still on the front (though not visible because of the crazy pattern) and an old sweat smell rocking at the pits suddenly became glaring evidence. And though Rob doubts anybody but me noticed, I noticed and I was so embarrassed. Silly, maybe, but I don’t really get out much :) 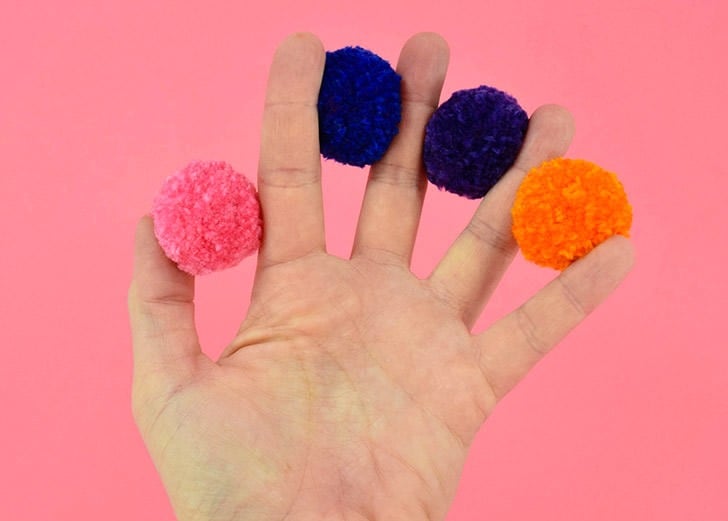 But then I got back to work to make some pompom gnome Christmas ornaments and it truly amazes me how much crafting can turn my attitude right around. As I was working on these little cuties I felt my spirits rise, rise, rise until I realized none of it really mattered. It sucked but it wasn’t the end of the world. It really is amazing how you can just go right to the root of a problem and get it taken care of when you’ve calmed down a bit, isn’t it :) 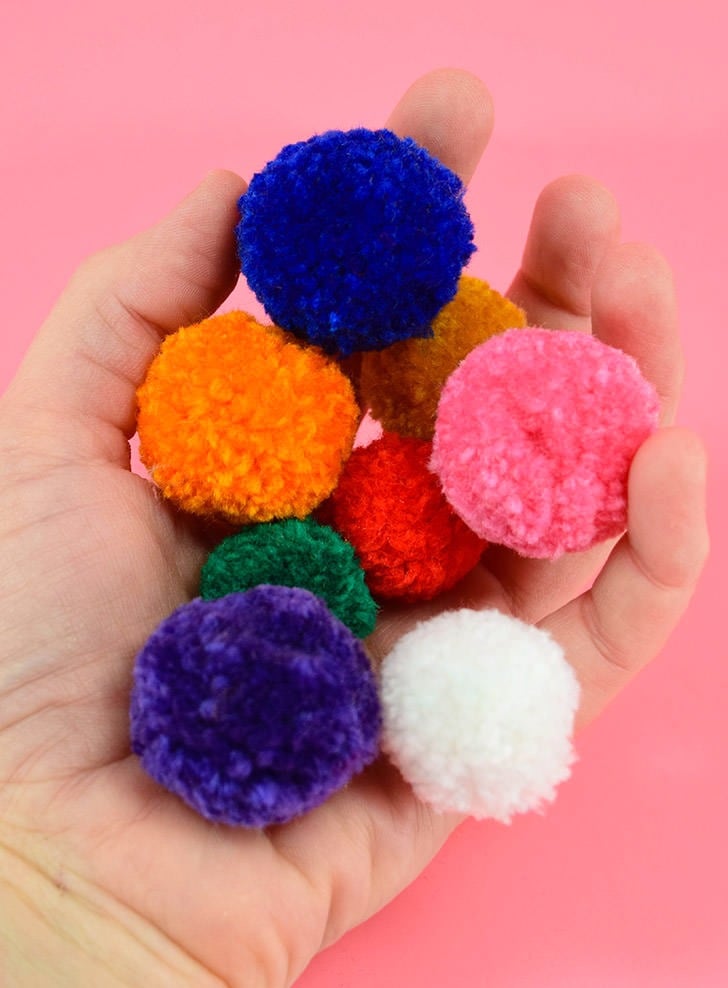 While I was making my gnomes I made some little fork pompoms and I realized that maybe not everybody knows how to make pompoms with a fork. Heck, maybe you didn’t even know that you could make pompoms with a fork. The resulting little fluffs of yarn are SO CUTE and it’s also a great way to bust your yarn stash a little bit, too. This isn’t going to take the place of store bought pompoms because these take a bit of time but they are perfect when you have a pom that really stands out that you want to be super duper cute. Like the tips of these guys hats, amIright? 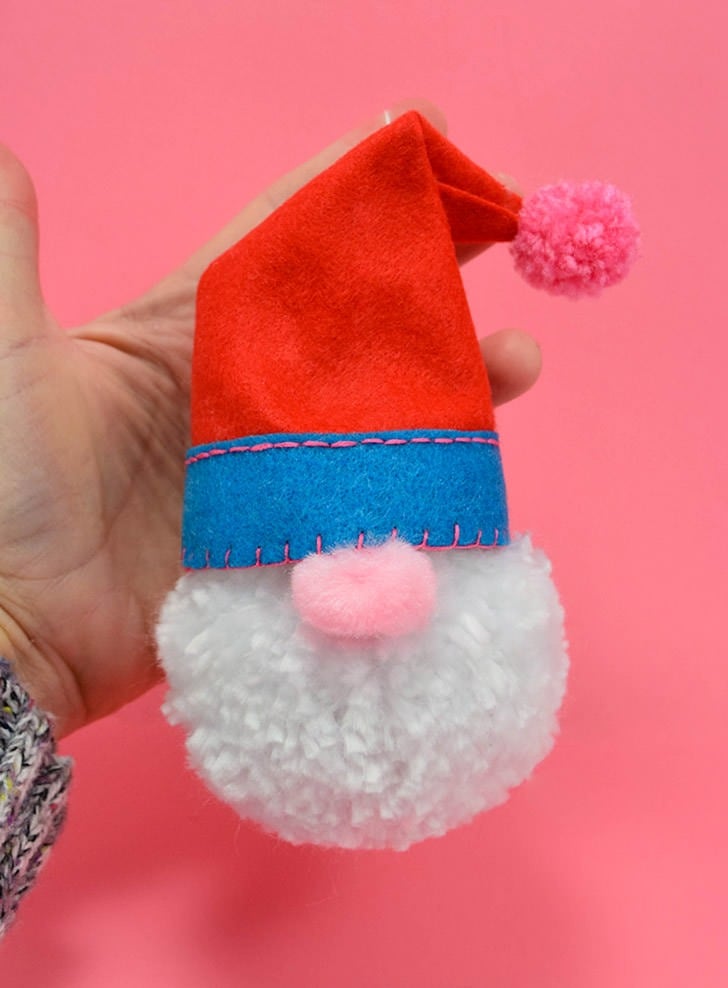 But for now if you want to concentrate on the task at hand, and why wouldn’t you? raid the silverware drawer and grab a big ol’ dinner fork and some cute colors of yarn and let’s make some fork pompoms! 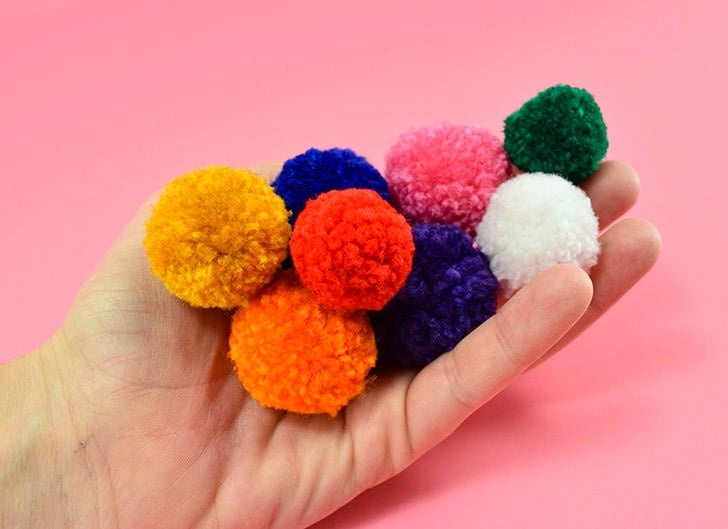 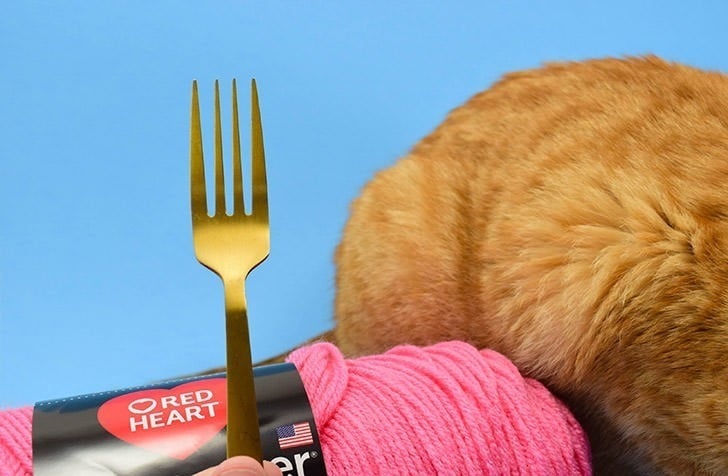 Any metal fork will do, but one that’s a little more heavy duty one with sturdy tines works the best. You don’t have to match your for to your cat, but kudos if you do :) 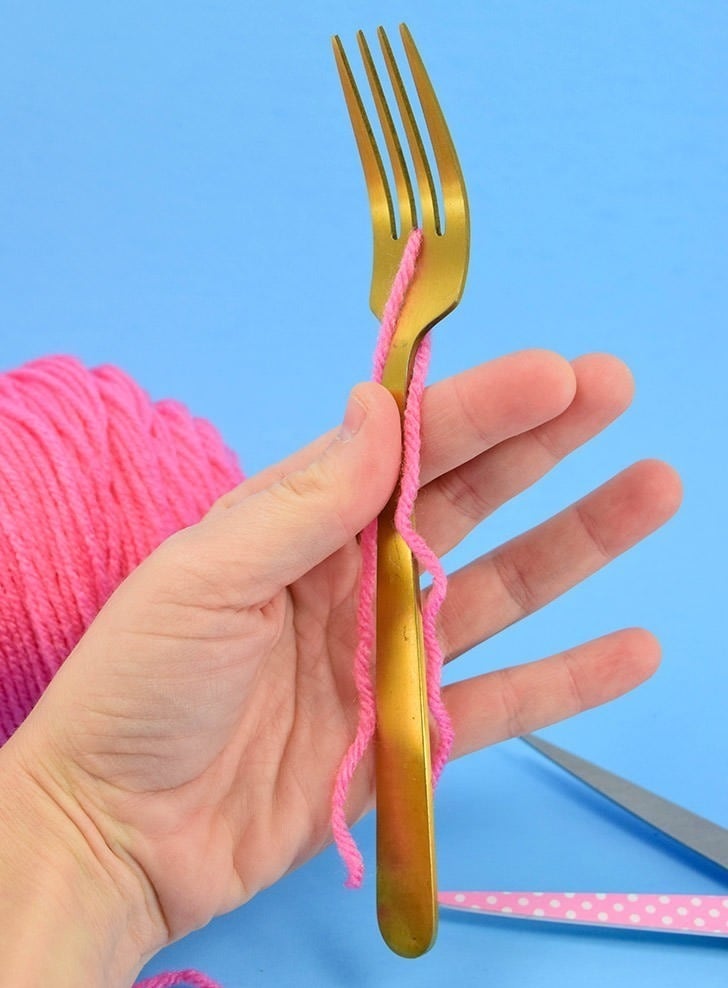 Cut a piece of yarn or crochet thread to about 6-9 inches long. Place the yarn in the middle tine of your fork and let the ends hang down onto the handle like in the pic above. This is going to be the string that you use to tie up your pompom so it’s a pretty important part of the process.

You can use the yarn you already having going for the pom, or you can use crochet thread if you have it on hand. I keep white around because it is a pretty handy little supply for the craft stash, and you find lots of ways to use it pretty regularly. Both ways work but I prefer the crochet thread because you can tie up that string really, really tight and have to worry less about your pom falling apart on you, especially if it’s a heavier wear item you put it on, like a beanie. For things like my Christmas ornaments that won’t be handled much using the yarn you’ve already got works well enough! 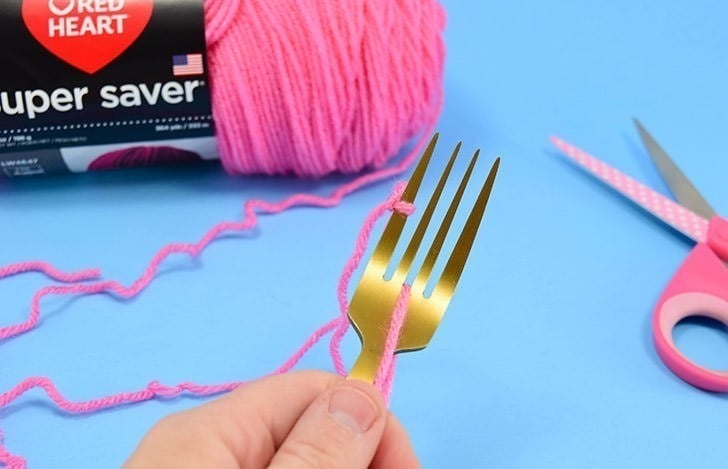 Tie the end of your yarn onto one of the outside tines on your fork. (You might be able to skip this step after you get the hang of making the poms by holding the yarn in place, but I think this is a good place to start.) 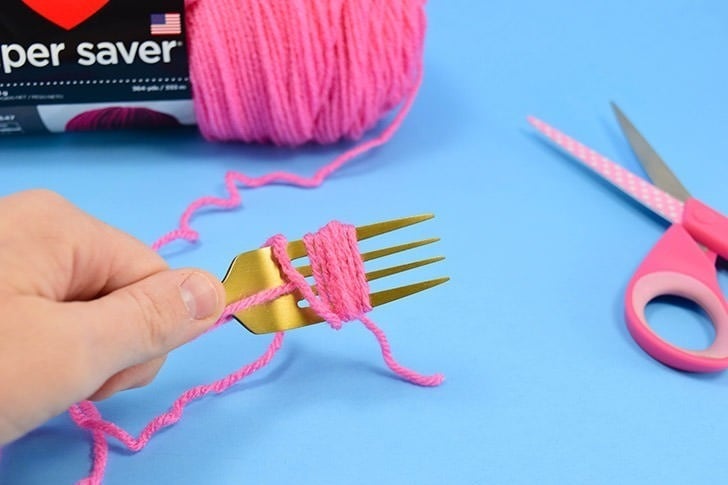 Begin wrapping the yarn around and around the fork. 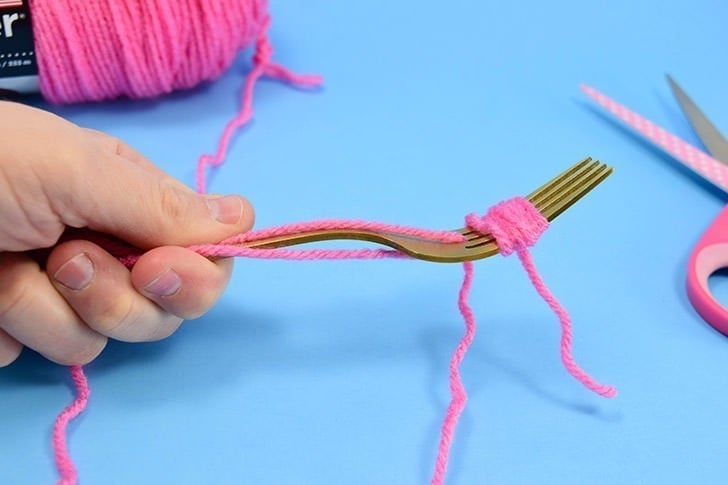 Be sure to keep that strand through the center tine and held along the handl in place as you go. 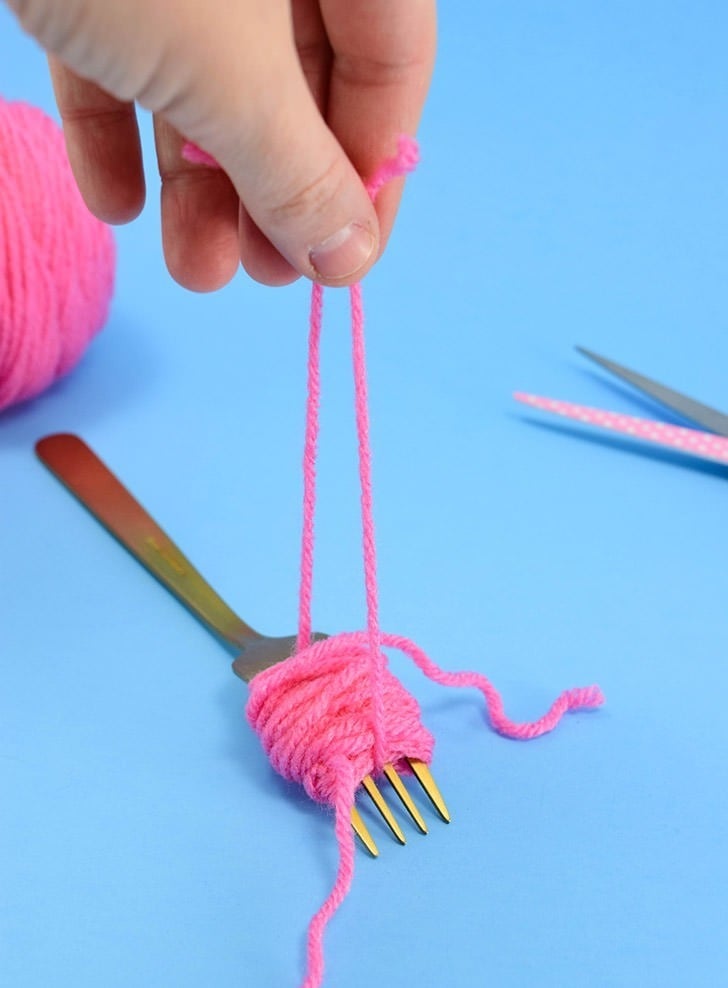 Once you’ve gotten a nice, bulky amount of yarn around the fork bring that center string up and around the bulk. It’s easiest if you flip the fork over like you see above and have it on a flat surface as you do this step.

FYI, for bigger poms you’ll need to have a very, very large bulk of yarn around your fork. For smaller poms something more like the pic above does the trick. The fuller the pom, the better they look, in my opinion, because you have more to trim away for a really pretty, round shape… 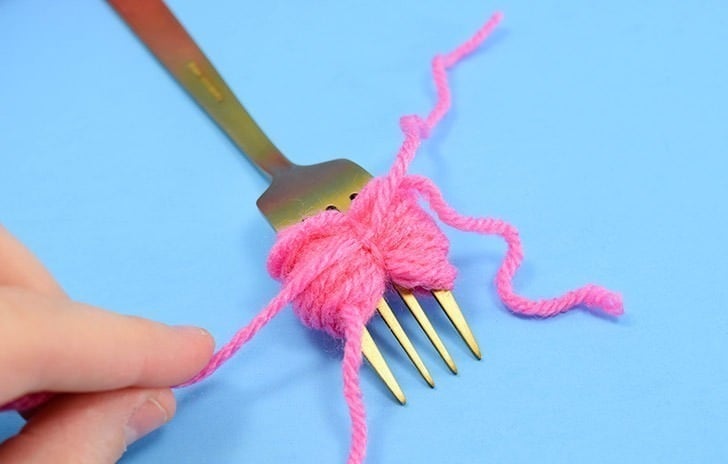 Tie the string really, really tightly around the bunch, double or triple knotting it so it stays firmly in place. 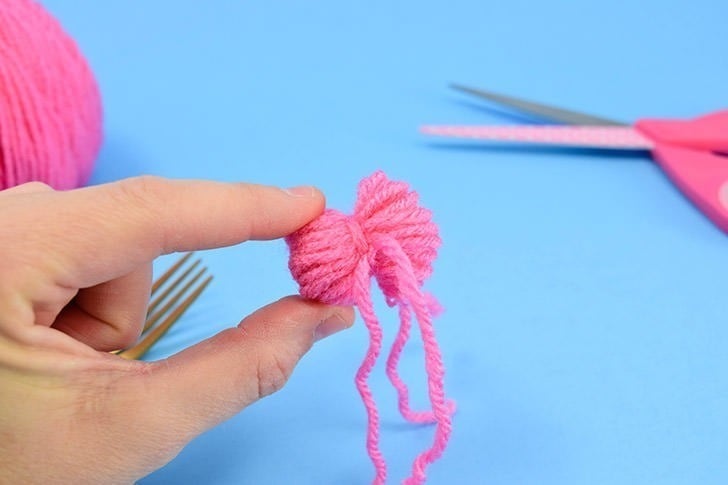 Slide the bundle off of your fork. See how it looks like a little bow? 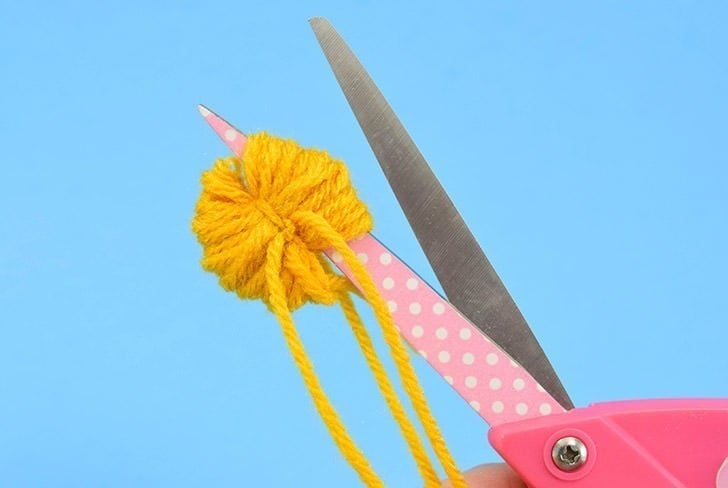 Insert a pair of sharp scissors through the loops on either side of your bundle and cut to separate.

On a side note, I literally just bought a pair of Fiskars Seamstress scissors just for making pompoms. These suckers are SO SHARP and I don’t have to hack away at the yarn. For a while I just used scissors I already have and I made them do but if you’re planning on making a lot of pompoms (either small or bigger ones, like with a Clover PomPom Maker which you can learn how to use with my pompom making tutorial here)  a pair of super sharp scissors are going to cut your time working each pom down significantly. 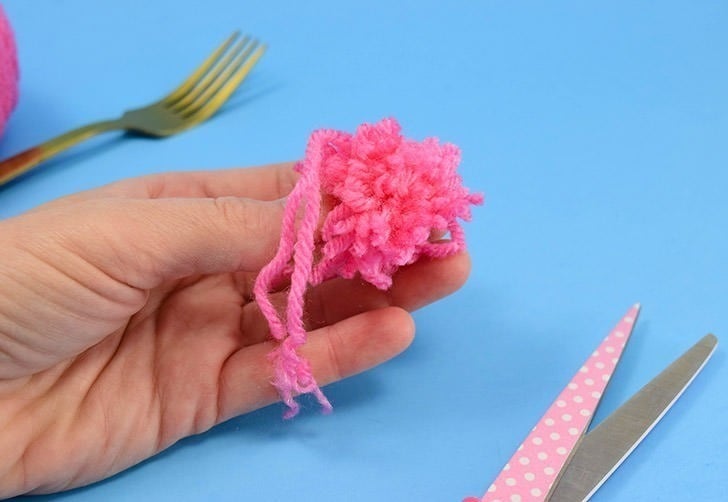 Pompoms straight off of the fork are going to be wonky looking :) 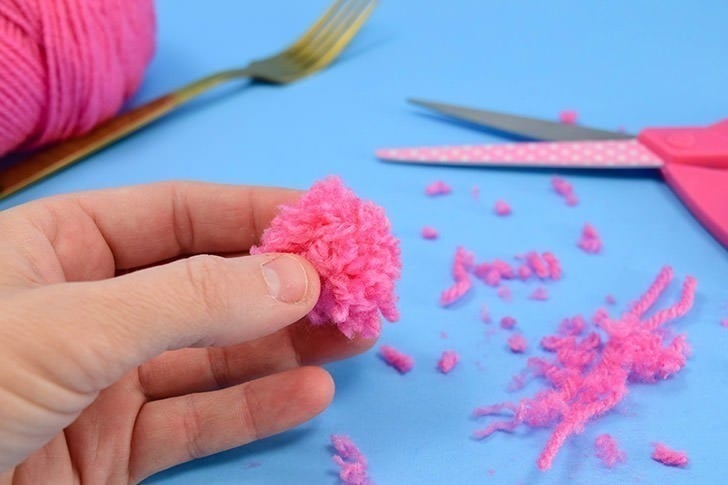 Using the sharpest scissors you have, simply roll the pom around in your hand snip, snip, snipping the extra yarn away. 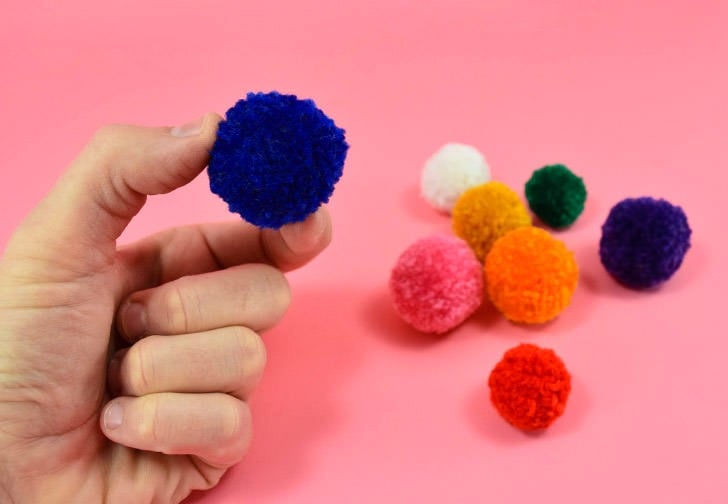 And once you’ve made a couple you’re going to find a bazillion reasons to use these little cuties because they’re like store-bought poms, but SO MUCH BETTER! 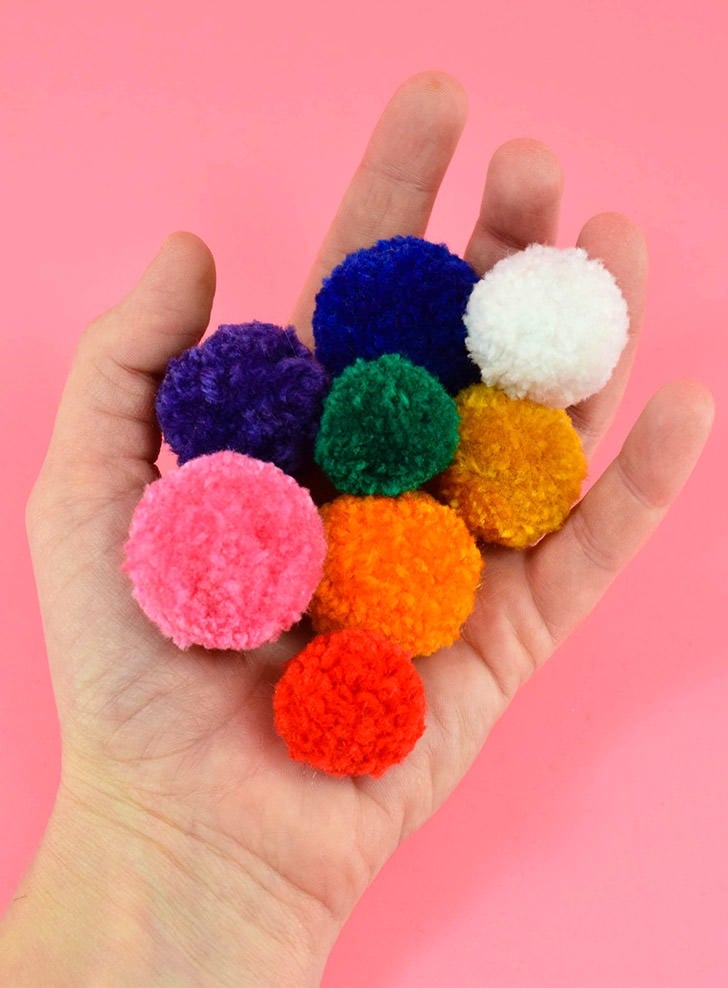