If you’re looking to add some fun and color to your Christmas tree look no further. These DIY multicolored pom pom ornaments are adorable and inexpensive! 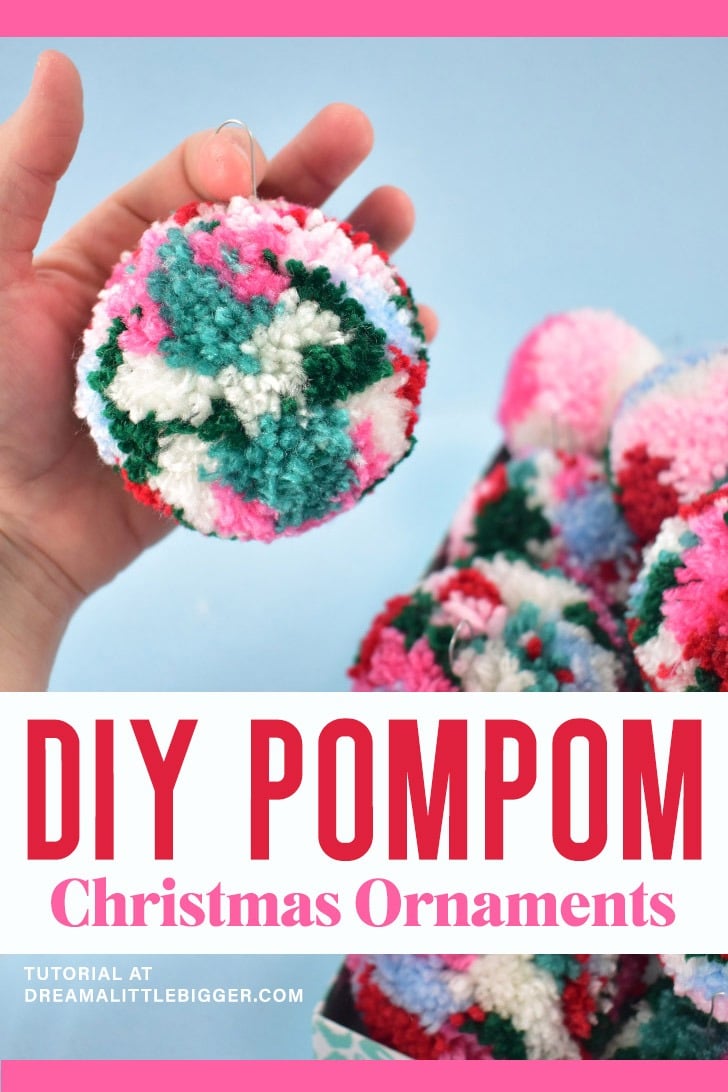 I’ve been wanting to make multicolored pom poms for a while now. Like, a long while. And as I was picking up my office and putting away yarn from a recent project I realized that I have a ton of yarn. Like far more than anybody needs with as little crafty storage space I have right now… And so pretty much any way I can think of to diminish my stash is a pretty darn good thing.

Since I had most of the colors of yarn already that are in my DIY ornaments I’m making for yet another DIY Christmas tree design I decided to make some pom poms. Because pom poms are amazing and if anything can stand alone as a gorgeous ornament, it’s definitely going to be a multicolored pom.

These are so cool that pom pom ornaments are even available at Anthropologie.

As I began typing this post I sort of marveled to myself how very Anthropologie these guys looked. And so I went over to Anthropologie and guess what? You can totally buy pom pom Christmas ornaments from there. BUT, and this is a HUGE BUT, they’re ridiculously expensive. At $24 for a set of 3, these ornaments are 8 bucks apiece. EIGHT BUCKS APIECE!

Now there is a size difference in my pompom ornaments and theirs…My largest pompom ornaments measure out at 3″ wide. Since my tree is only 4 feet tall, this is a good size for me. However, they can be made larger, more similar to the Anthropologie ornaments which ring in at 4.5″ wide if that is what you want. And, the thing is, if you DIY you’re going to save a ridiculous amount of money. 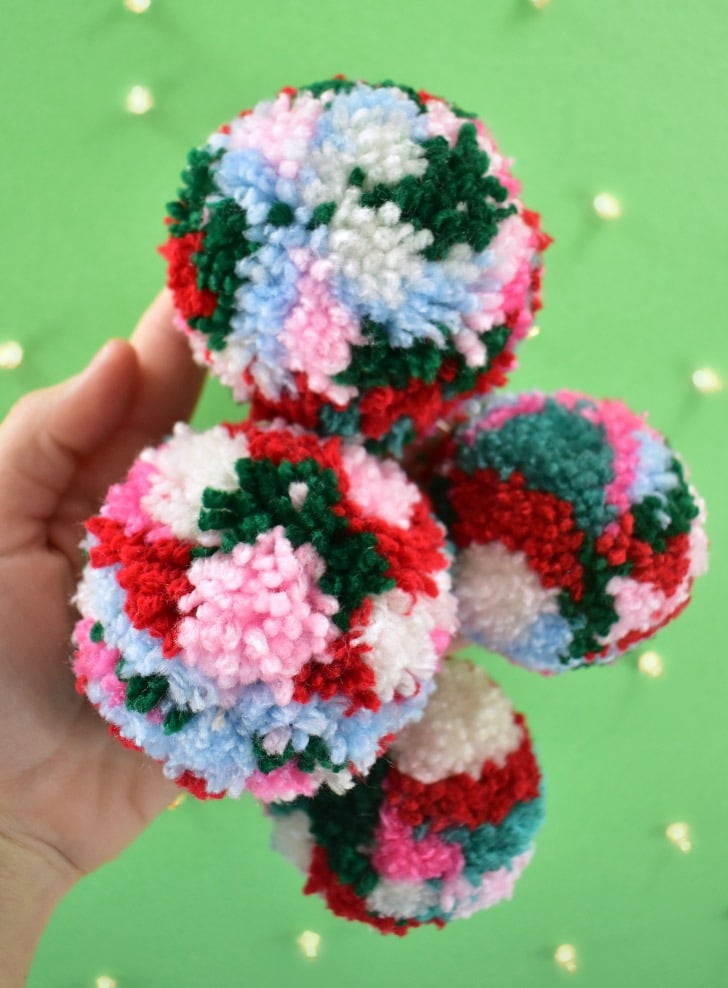 Seriously, save a ridiculous amount of money with DIY.

I used Red Heart Super Saver yarn which is really darn cheap. You can buy all 6 of the colors I used at Walmart for $3.44 a skein. Six skeins times $3.44 = 20.64 before tax. Now compare $20.65 to $24 for THREE Anthro ornaments. Holy freaking cow, right? I don’t even KNOW how many DIY pompom ornaments you can make out of  6 skeins of yarn but it’s a freaking lot. I made ten ornaments for my tree and I’m using half-used skeins from my stash. And by the looks of it, I’d guess I could make another 20 or 30 more. And for less than the of three if you buy instead of DIY. Nuts. It’s nuts.

If you love the style of Anthropologie but get sticker shock like I do when actually browsing the racks, this DIY is for people just like me and you! 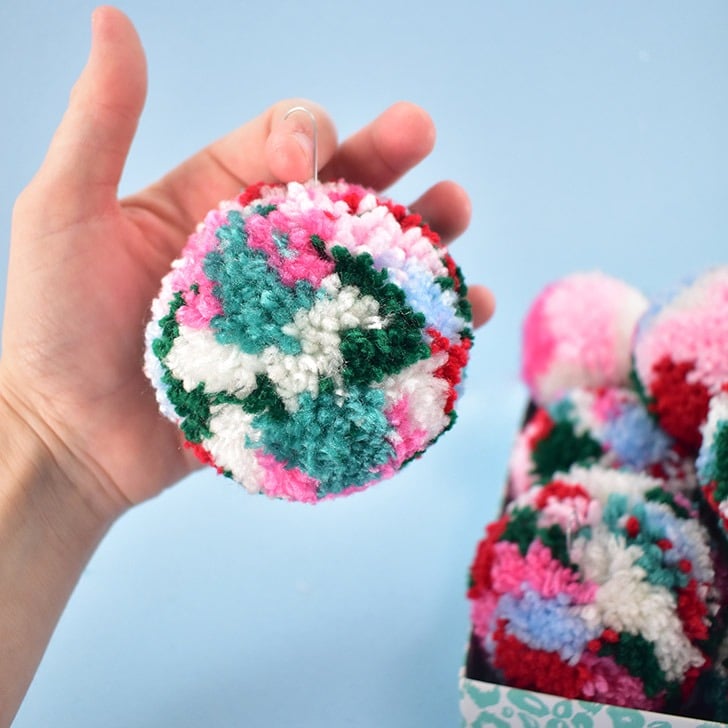 Supplies Needed to Make Your Own Pom Pom Ornaments:

The Clover Pompom Makers that I have used forever and ever I can’t find to purchase right now. But in this set I’ve linked to the 2 largest are the same size as what I used, it’s just a different brand. This extra-large pom pom maker will make the same size (4.5″) as the ones available to buy for $8 a piece. <— Gosh, that never stops shocking me!

Super sharp scissors make this project SO MUCH EASIER. I straight up have a pair of scissors I keep with my pom pom makers in the same box in the craft closet. This way I always have a nice, sharp pair of scissors. Cutting around these makers with flimsy or dull scissors is so annoying. If you don’t currently have any scissors that are sharp enough, I love my Singer pair.  I like these scissors so much, in fact, that I keep several pairs on hand. They’re also affordable enough that if somebody not in the know uses them on paper or something, it’s not the end of the world to replace them.

How to Make Pom Poms.

*Note* If you’re more of a visual learner or if you need more instruction to make pompoms, we have a full post with a video to help you out over here. 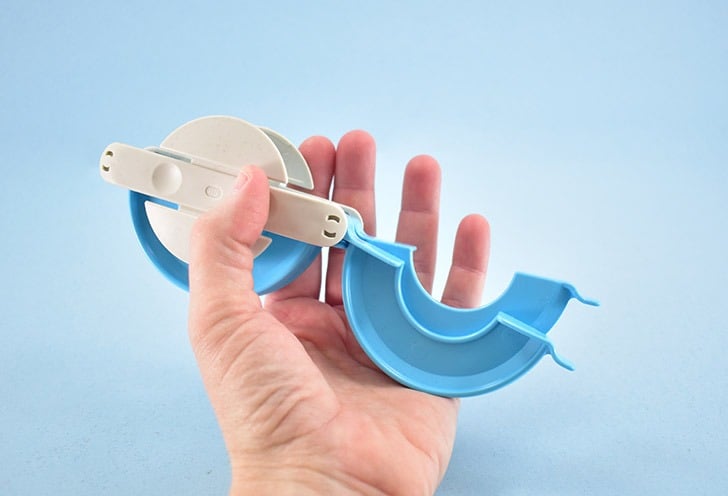 This is a pompom maker. To start, open up one side as you see here. 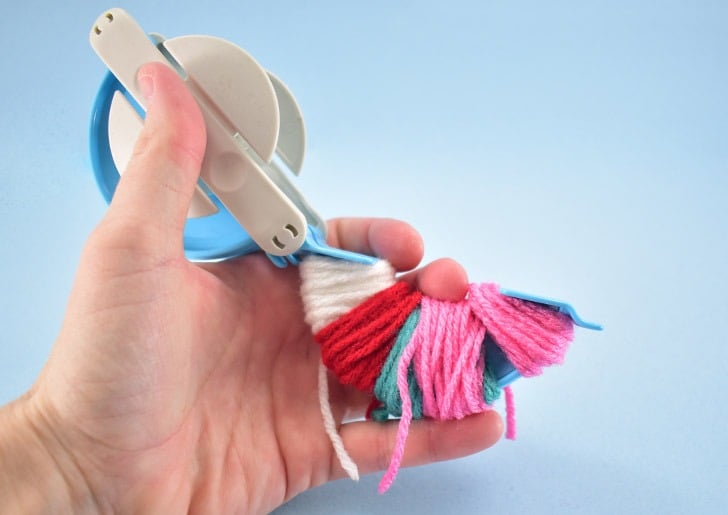 Wrap yarn around the arms of the pom pom maker changing colors frequently. 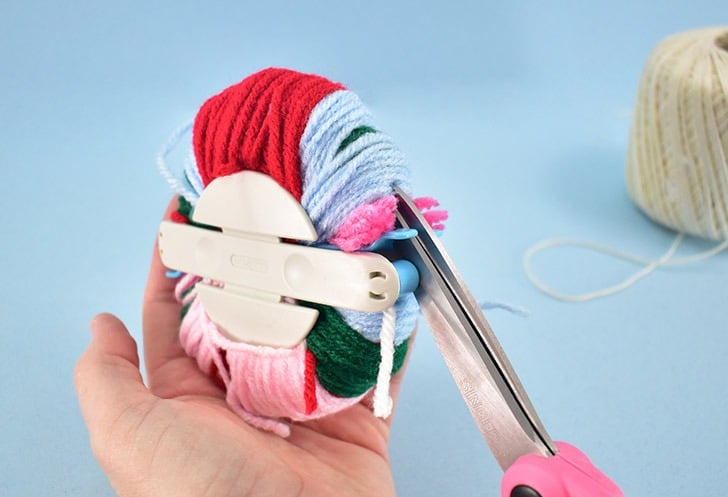 Once both sides of the pom pom maker have been wrapped and the device has been closed up, trim in the middle (there’s a channel) with sharp scissors. DO NOT REMOVE THE POM POM MAKER JUST YET. 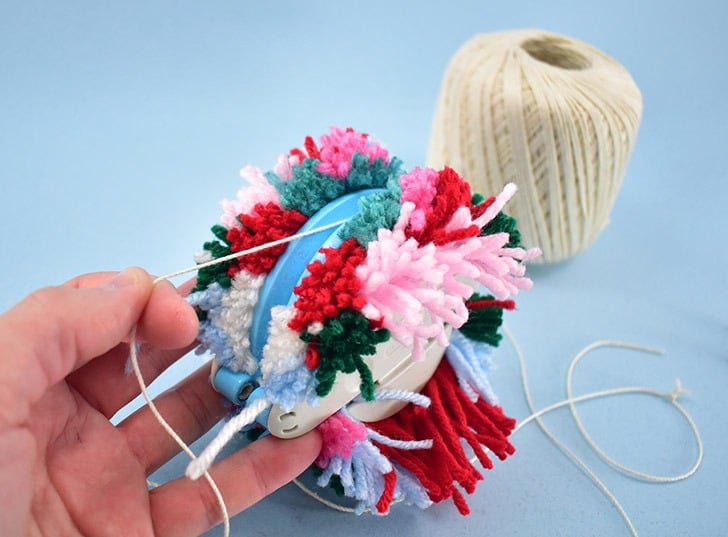 Take a piece of yarn or other string and wrap it in the middle of the maker pulling it as tight as you can. Wrap and knot this cord several times to secure.

*Quick tip: If you have a thin but strong cord, like crochet thread, it will pull much tighter giving you a much more secure pompom. The same yarn you are using will work but if you want something more secure the crochet thread works very well. 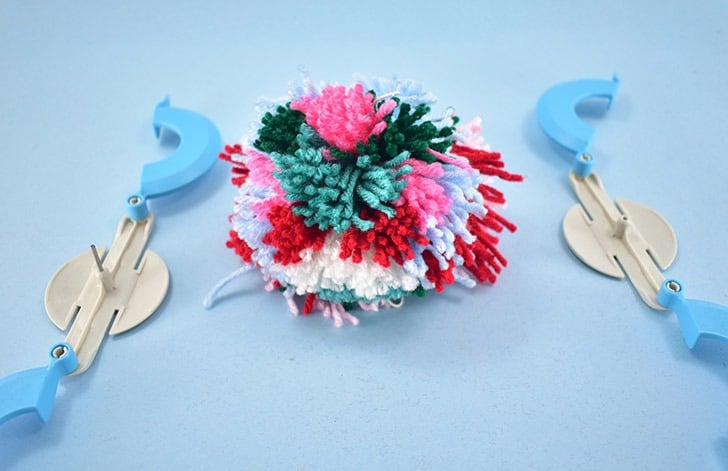 Once well tied, pull the two pieces of the pom pom maker apart as you see above.

How to trim pompoms to be round. 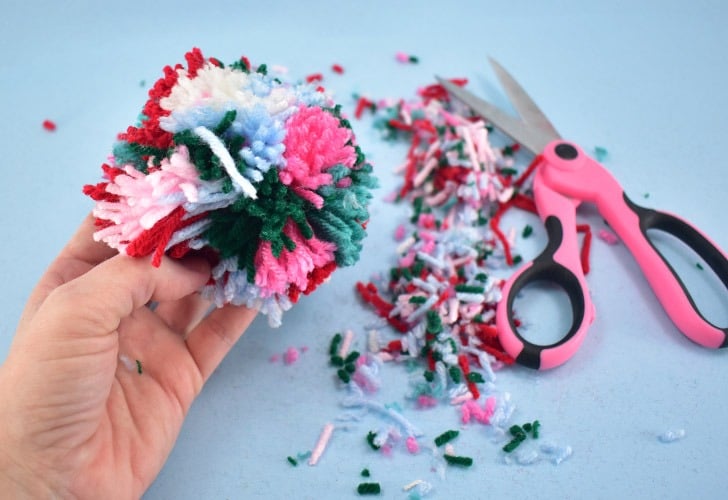 When trimming your pompoms you can accidentally go a bit too far. Just because you’re using a 3.5″ pom pom maker doesn’t mean you can’t trim that sucker down to 2.5″. As with so many things in life you have to practice a little moderation. 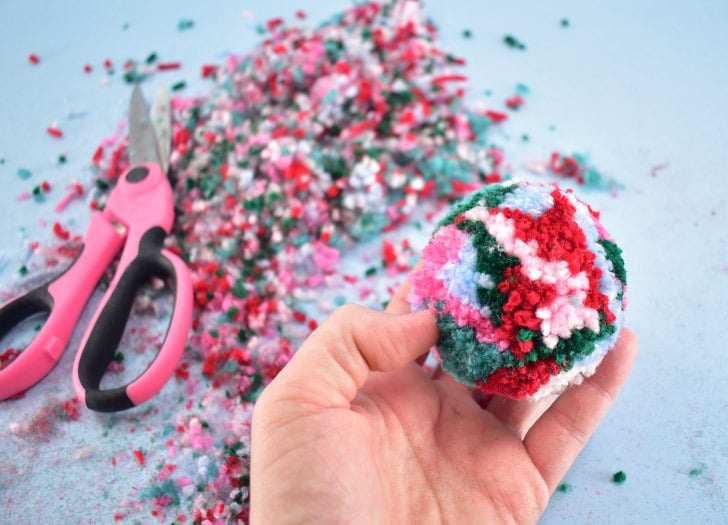 It works best to rotate the pom around and around as you lightly trim away. Give the pom a fluff by tossing it around in your hands to help loosen any long pieces of yarn that haven’t been trimmed, yet.

I like my pom poms to be super dense and so I go into it knowing I’m going to trim them down quite a bit. See how my pom up there looks more like a toy ball than a fluffy pom? That’s just my preference. If you’re also interested in this more dense look go UP a size in your pom pom maker.

..or as close to perfection as possible :) Here are a few quick tips to make your pompoms perfectly round, full, and totally amazing looking… 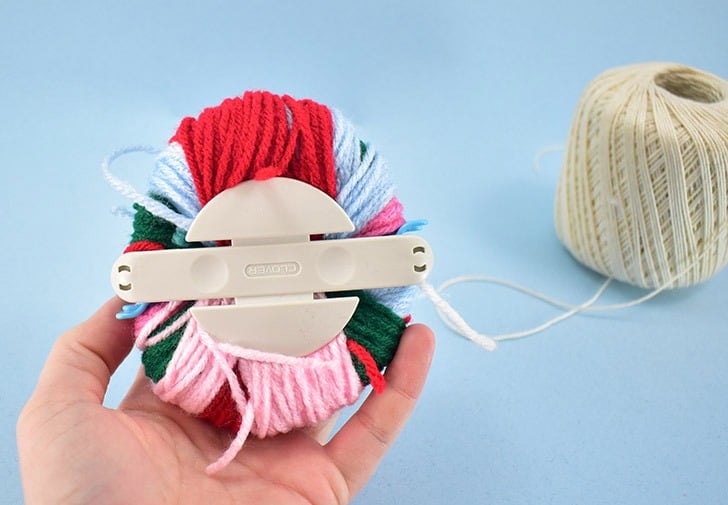 For very full pompoms wrap as much yarn as you possibly can around the arms. It might make it stick a little bit when closing but the key to thick and lush pompoms is in this detail. 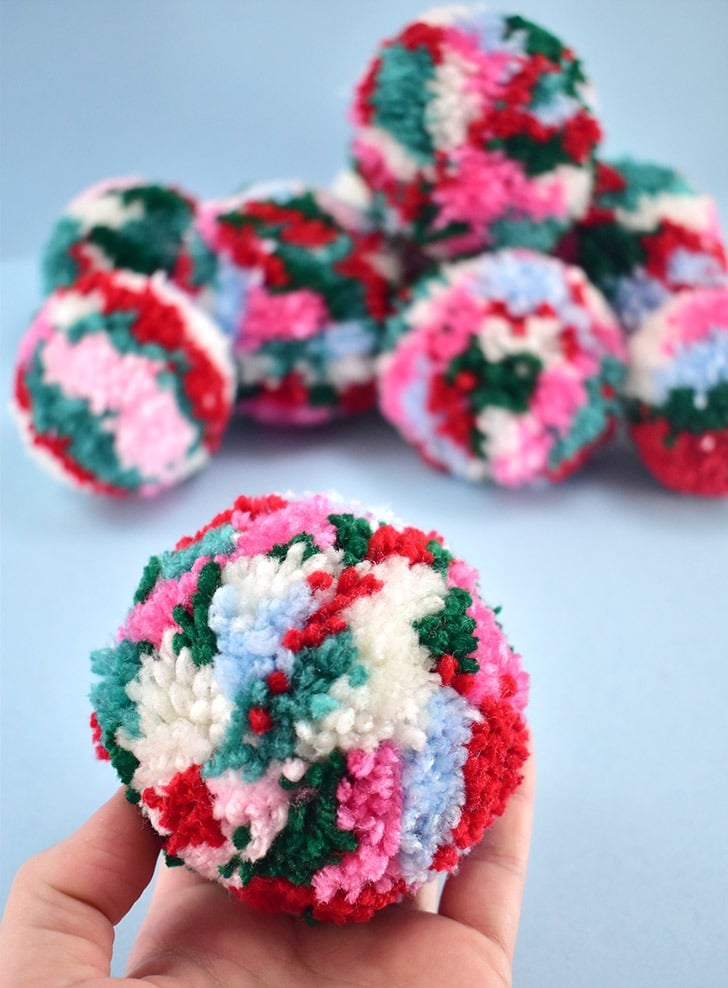 Look at your pom from several angles. Continually moving the pom as you trim can help you see any areas that aren’t rounded. See the strays sticking out of this fellow? He still needs some trimming for me to be happy with it. 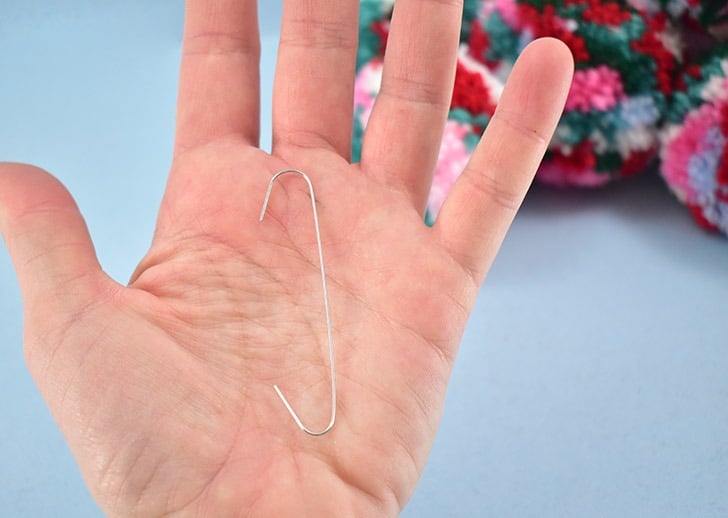 Grab a long metal ornament hook. These are sold near the Christmas ornaments anywhere you can buy Christmas stuff or you can order  the same ones I used here. 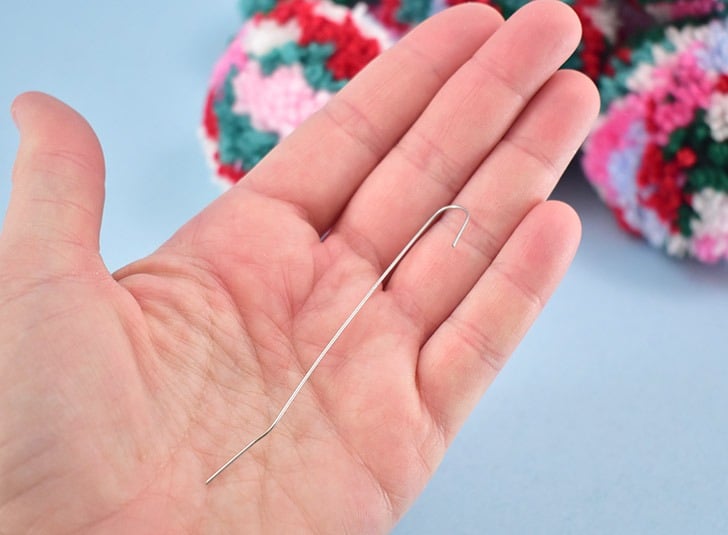 Straighten out one end of your hook as seen above. 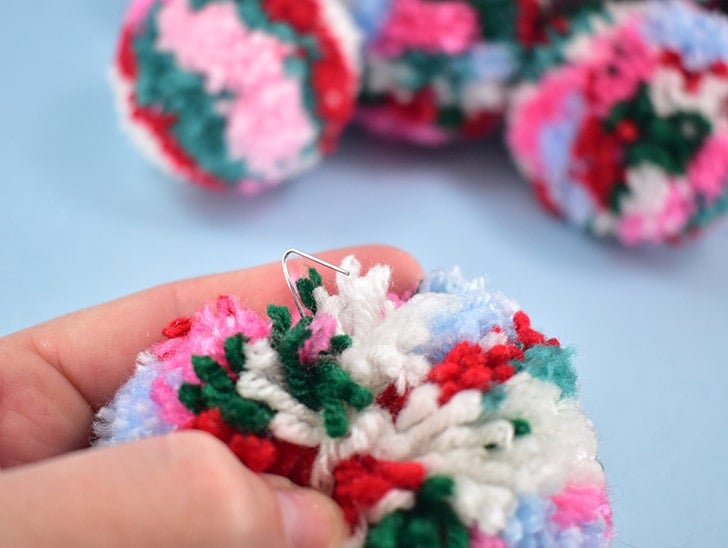 Push the straightened end of the ornament hook through the center of the pom pom. Pinch the end into a sharp hook shape using needlenose pliers. 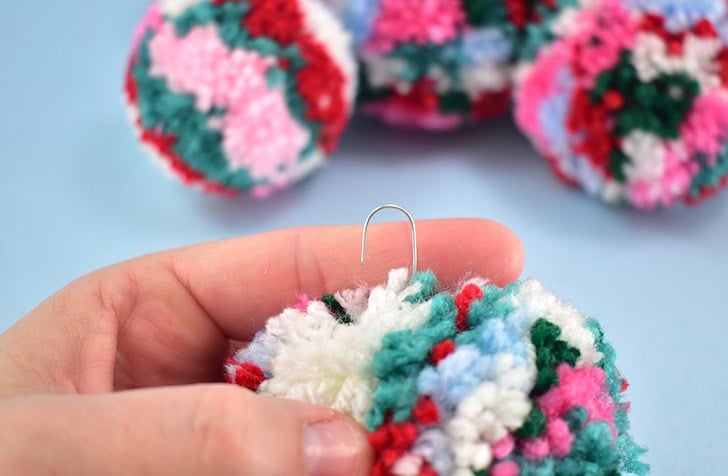 Pull the hook you just made up into the center of the pom pom. It should catch somewhere around the middle embedding the end you bent deep inside while leaving the other curved end sticking up out of the pom. 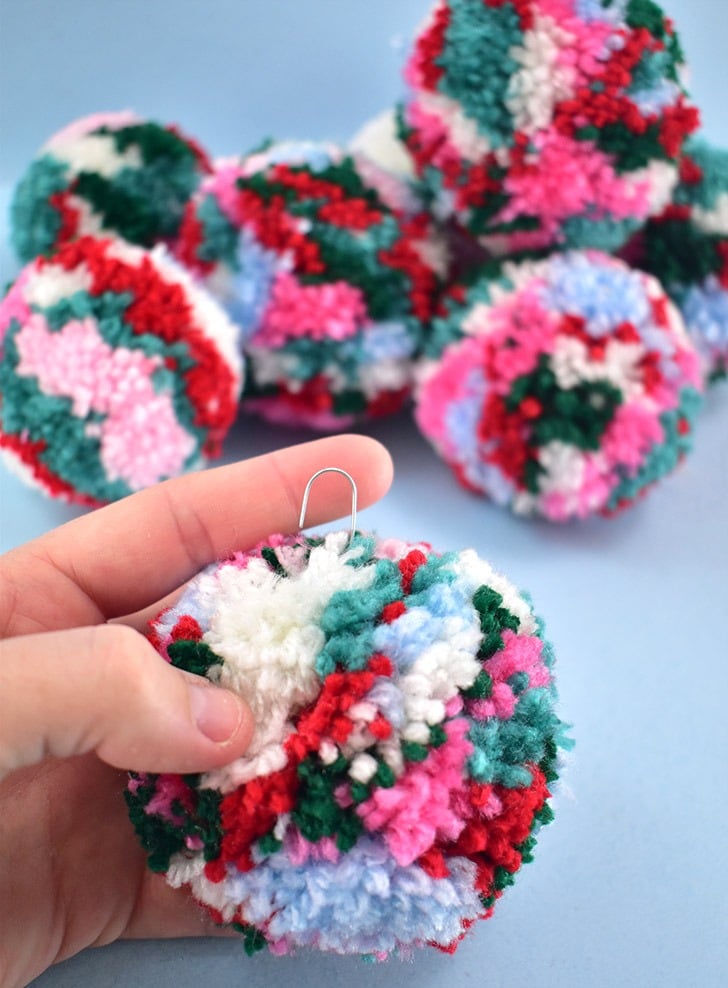 Congrats, you just made your first pompom ornament! 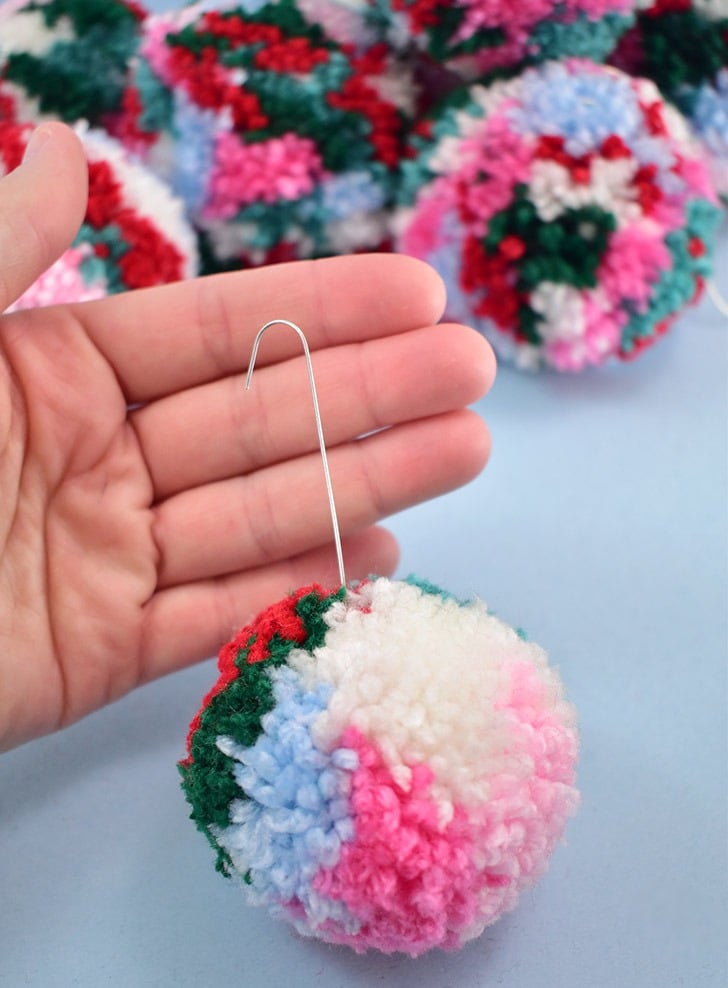 Should you need longer ornament hooks you can add a second to the first that is inside of the pom. Simply bend the top, protruding curve of the hook into itself to form a loop. Attach a second ornament hook to that loop, tightly wrapping it around a few times with help from your needlenose pliers. 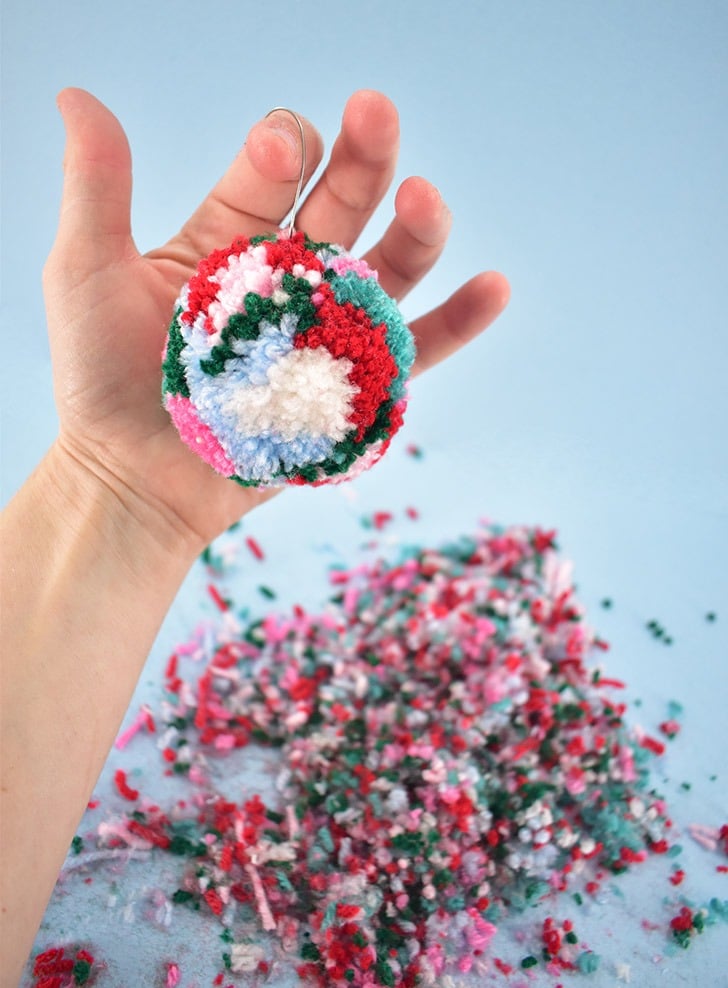 Adding the hook can push some of your yarn bits out of whack. Give each ornament a quick once over with a sharp pair of scissors to neaten up and this craft is done!

I hope you love these pompom ornaments as much as I do. I’m sure you’re going to LOVE how many of these guys you can make on the cheap in the perfect colors to match your color scheme!

And if you love these ornaments I promise I’ve got a wreath you’re going to flip for. Be sure to check back for that one soon! 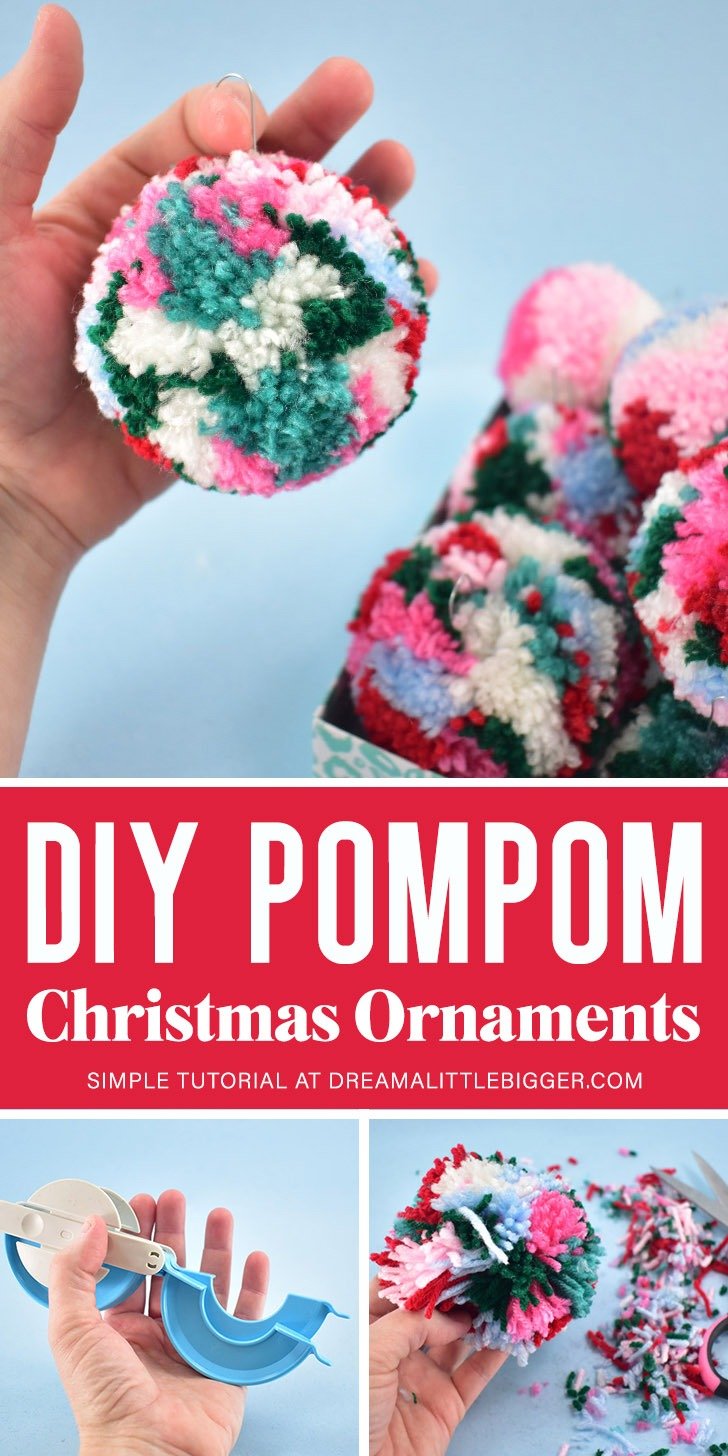