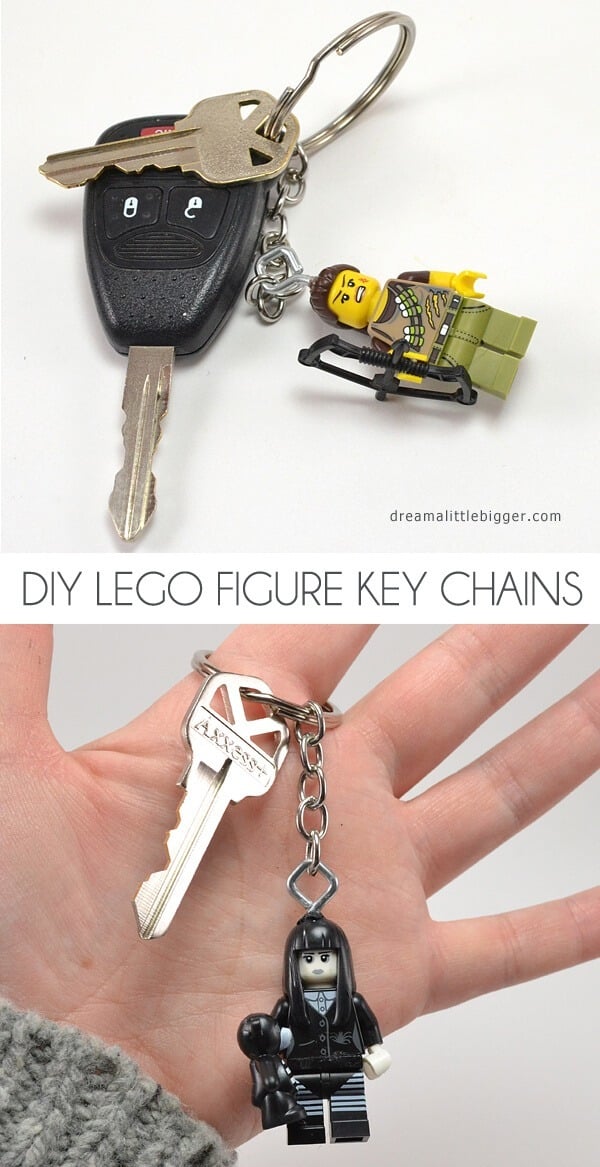 A couple of weeks back on my nephew’s birthday we decided it was a night for pancakes. It was kind of late for breakfast for dinner, or any dinner really, well past dark outside but since it was a special occasion we didn’t think a whole lot of it.

Now this Denny’s is in a Holiday Inn and it shares bathrooms with a bar which I didn’t think about until the birthday boy needed a visit. We rounded the corner and saw several men and women in their going out attire standing around. Little man kept on going towards the men’s room until he heard my stern NO. He wasn’t happy when I grabbed his hand and pulled him into the women’s room but there was no way he was going into that men’s room alone. No way. No how. 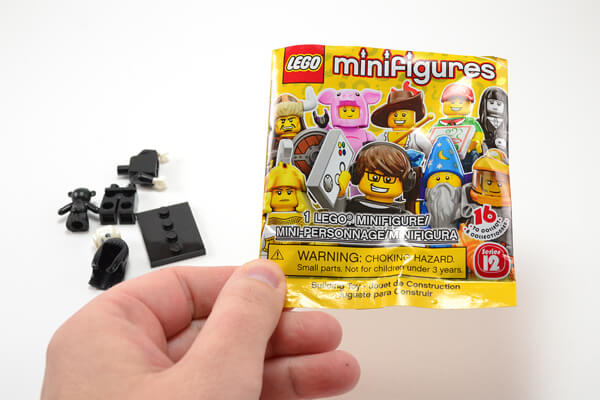 And while he’s taking care of his necessities a lady walks in and starts trying to take selfies in the mirror with her butt prominently on display. After watching her finagle and twist and turn I finally told her to give me her phone so we could do this right. Yes, I took pictures of some lady’s ass from many different vantage points so she could post it to Facebook. To be fair, she has a nice one but it wasn’t what I expected to have going down for my nephew’s birthday dinner.

So I told you all of that because I when I purchased these little LEGO figures at the store I knew I couldn’t tell what was inside but I didn’t seem all that concerned. I didn’t even think about it really. You see these little guys were going to be made into key chains for my nephews. But when I got home and opened the packages I didn’t get what I was expecting. 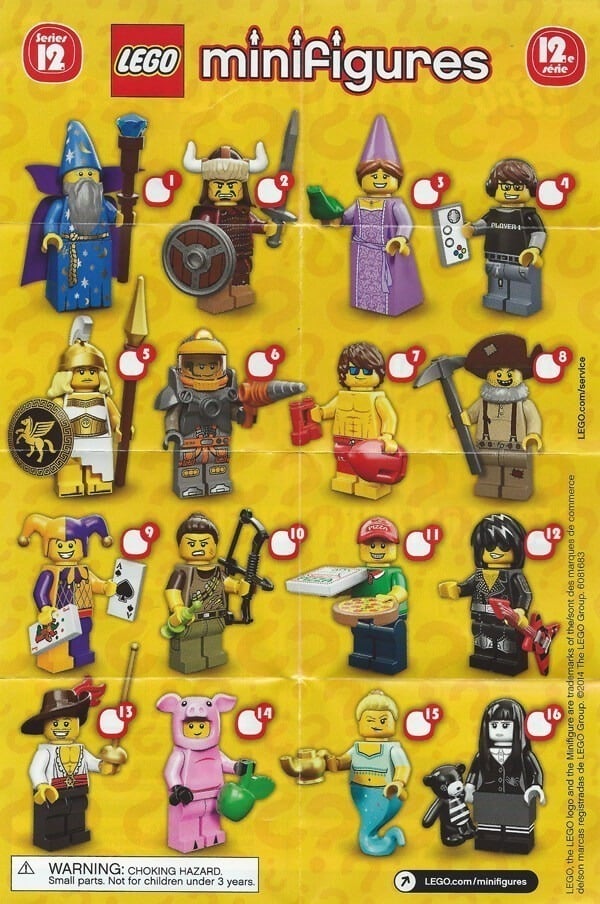 Look at all of those cool figures. A video game dude, perfect! Rock star, heck yeah! The pig, little man would love it! But even with a ration of only 5/16 of these figures being female, that is exactly what I got. Womp. Womp. What I wound up getting were numbers 10 and 16… the bow and syringe packing lady who looks like she has a bad attitude (and is maybe a bit of a ripoff of Katniss Everdeen) and the goth LEGO chick. In the end, I kept the militant figure and gave my sister the one holding an EMO bear. I guess I’ll have to buy up some more LEGO figures and hope for the best to make some for my nephews! Until then, let’s stop talking about stranger butts and surprises and get on with the tutorial! 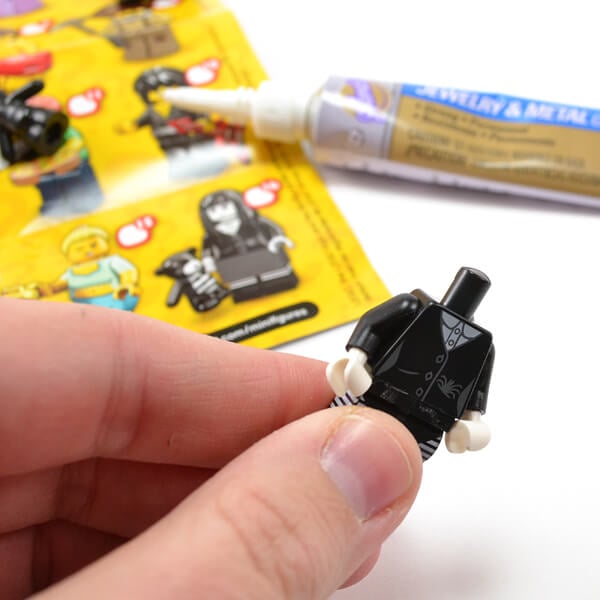 Start putting your LEGO figure together, using a daub of glue to keep everything intact well. You don’t need tons, just a bit or it will start to seep out and will mess up your figure. Use to put the head on and to put the legs to the torso, etc. 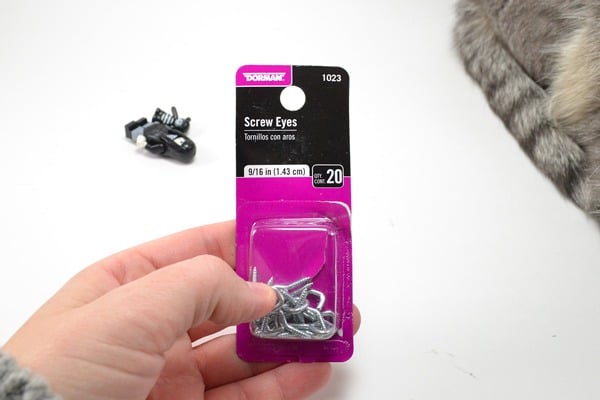 These are screw eyes. I have a bunch from the hardware section so that is what I used. Feel free to use whatever you have on hand or you can buy something fancier. 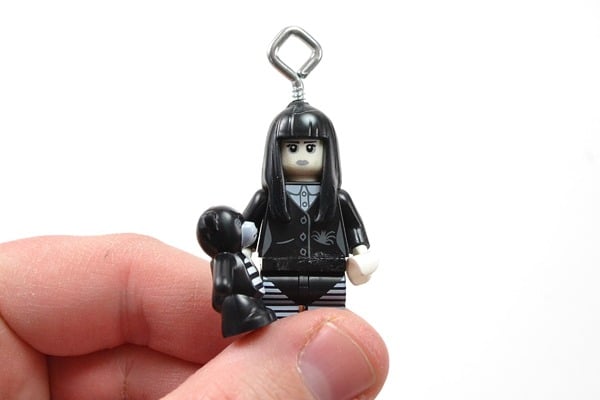 Turn the screw ye directly into the center of the head. When the threads are just barely visible, apply a bit of glue to them and continue turning until all the way seated.

When gluing in the accessories, you’ll need to give the figure ample time to dry. I kept the “Katniss” chain and started using it immediately and I lost the bow somewhere along the line. My sister has the one with the teddy bear and it sat for at least a week before she got it and it’s still all good. 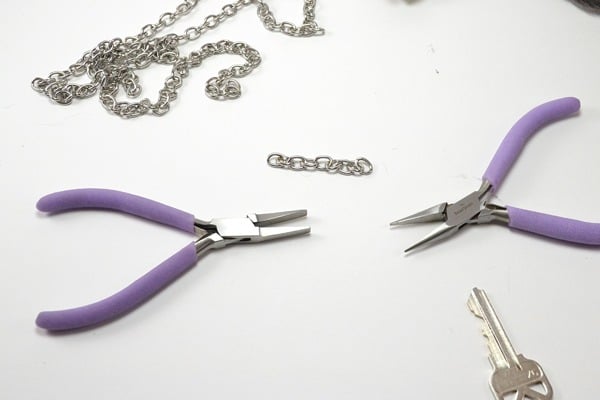 Grab some chain from your stash or pick up a bit from the store. Using pliers open a chain to remove a section the size you wish to use. 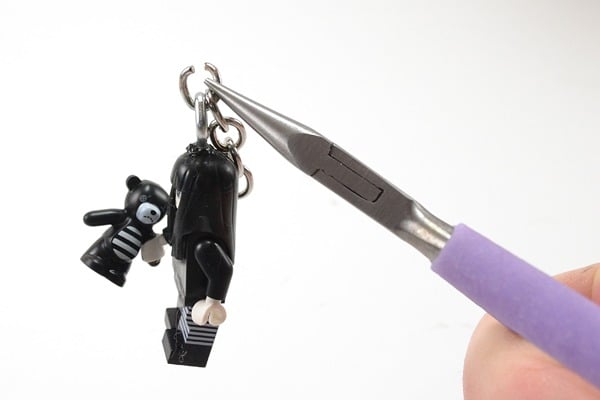 Put the open end through the eye on the top of your figure and use your pliers to close shut. 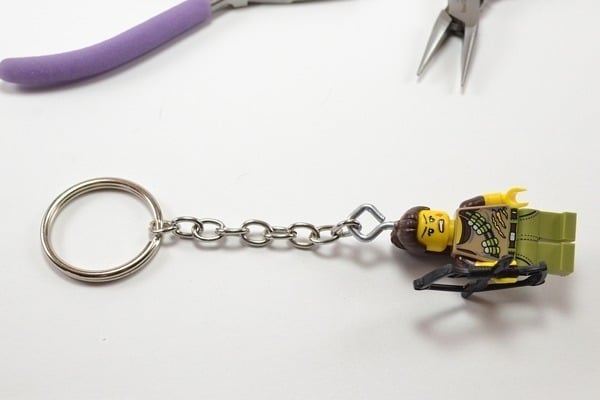 Wind the other end of the chain through the key chain ring to finish this sucker up! 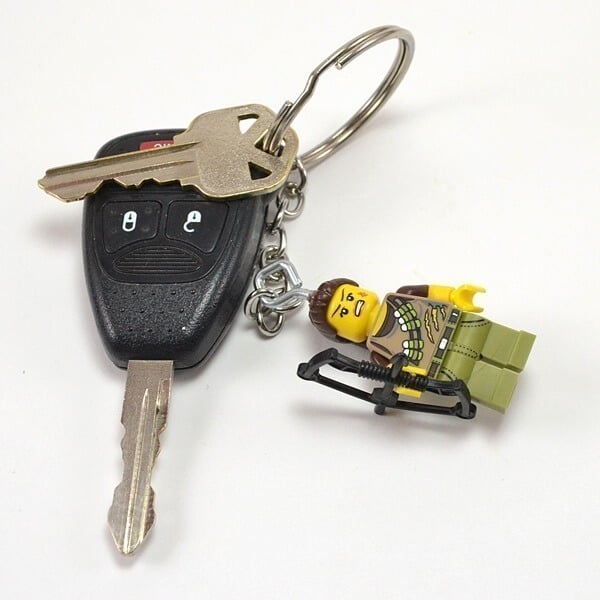 Add keys and this project is complete! 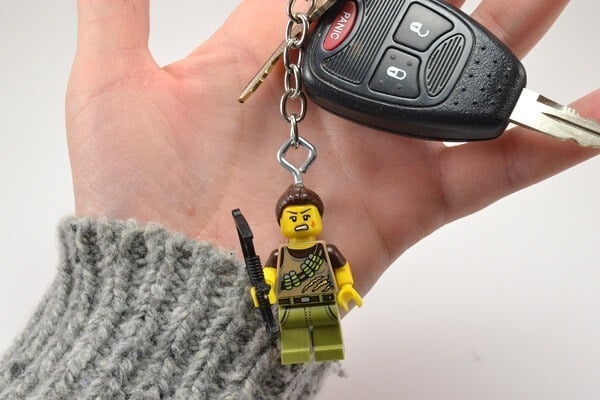 I’ve actually gotten a few compliments on my key chain which is pretty neat. I’m not a LEGO person myself, but I still like it and use it! 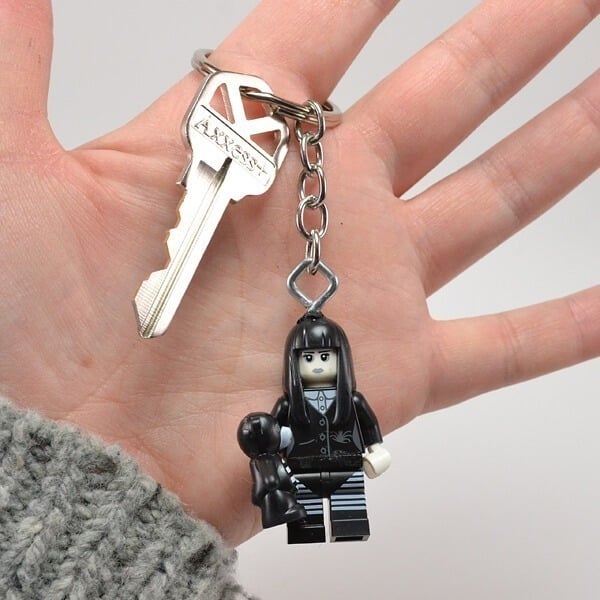 And my sister loves her goth key chain and was very excited that the teddy bear even had Xs for eyes! Where her skirt is, I have no idea, but at least she still has her EMO teddy!