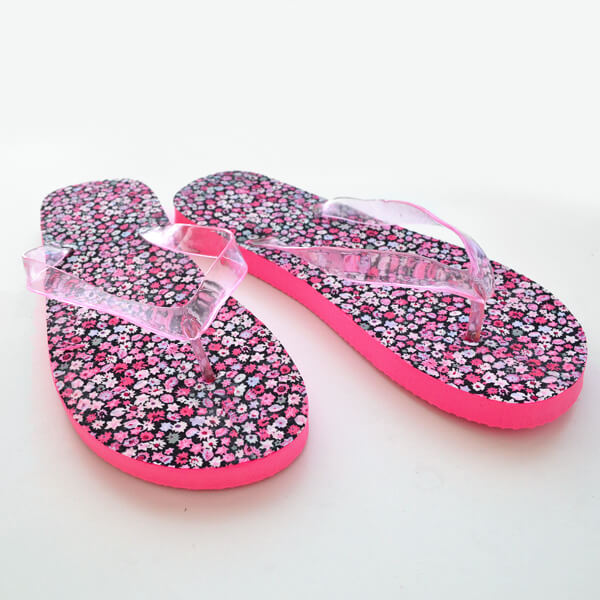 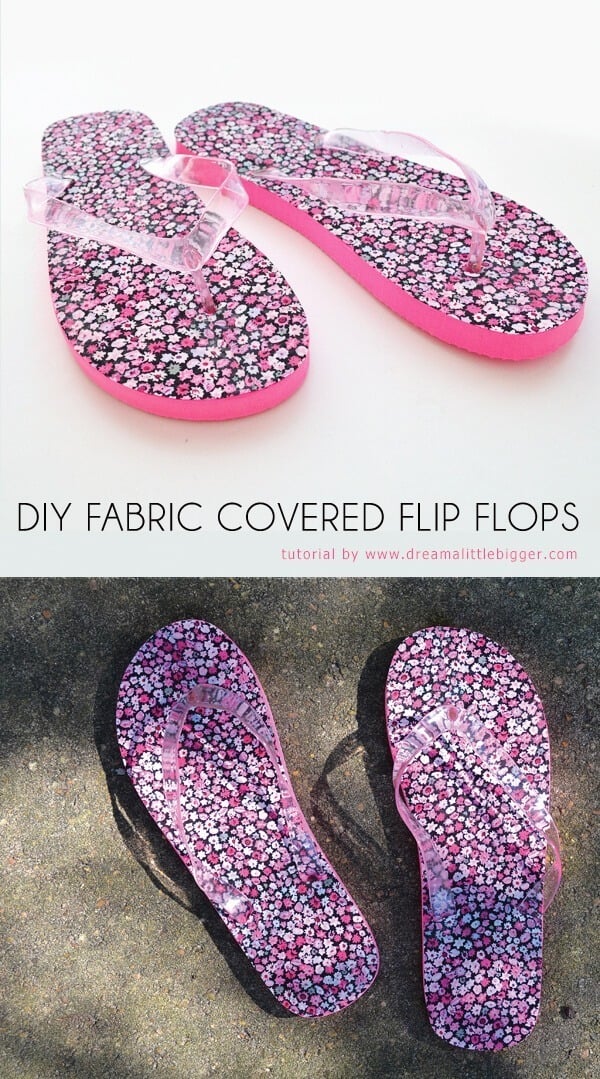 Come summer my Momma and I live in flip flops. They’re easy, they’re cheap and quite convenient when you’ve got pups to take outside or kids to chase outside after or whatever. As a result, we typically go through SEVERAL cheap pairs a season. And we were lamenting that the cheap ones aren’t cute and instead of just plain old whining, we decided to DO something about it. And that meant rocking out some fabric covered flip flops.

So we went through my mother’s fabric stash, which I might add is incredibly reasonable compared to mine and given that she actually does something like QUILT and found some great small patterns to work with.

And that’s kind of a big deal with this DIY. You need to find fabric that isn’t going to be obviously pieced together when all chopped up and put back together like a Chicken McNugget. So no stripes or chevrons or anything like that. Small and fairly undefined and totally random patterns work the best. ] 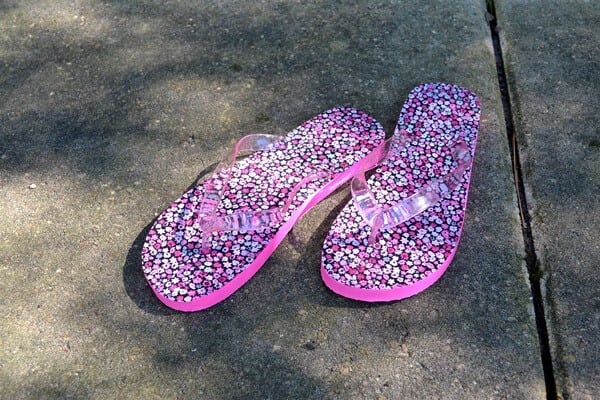 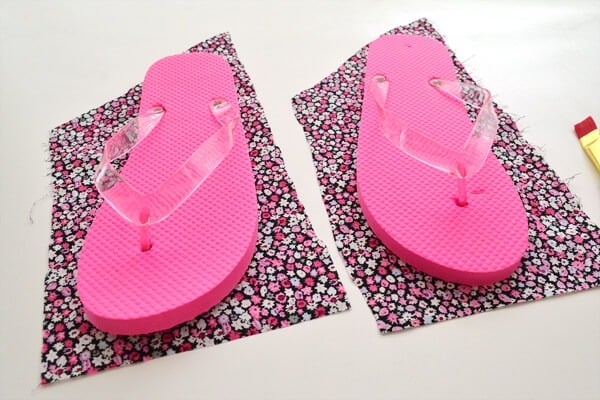 If you’re working with a limited amount of fabric, go ahead and cut a big piece that will cover each flip flop just to be sure you have enough when we get around to this part. 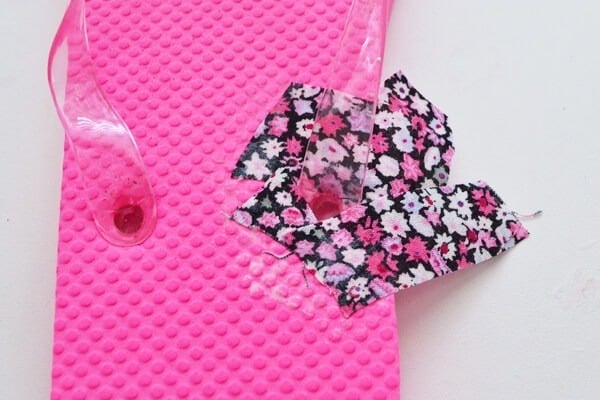 Next cut up a whole bunch of small pieces and glue and fit them around the 3 connecting areas for strap of the flip flop.  Use a good amount of Mod Podge to secure down and worry less about it being pretty and more about it being well covered. Allow to dry.

Smooth your Mod Podge onto the sole of the flip flops and start smoothing your fabric down. Work in areas that are about 3 inches wide and allow to dry in between so you don’t accidentally pull your fabric all wonky. 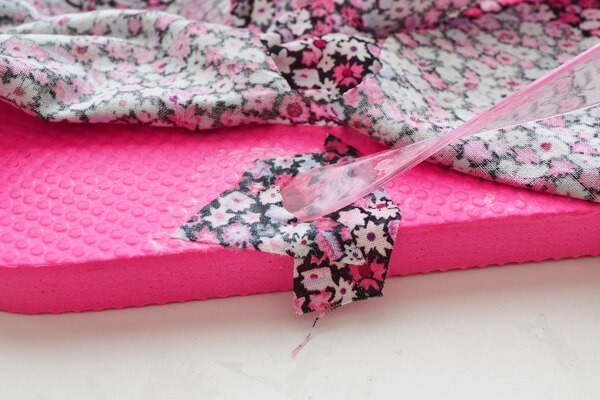 Once you get around where the straps meet with the rubber sole, you’ll need to cut the fabric so that it fits around. It doesn’t have to be perfect. That’s why we did the patches first. Just get it on there and smooth it out. Get the Mod Podge down so that the fabric doesn’t fray on you and fit it around as best as you can. 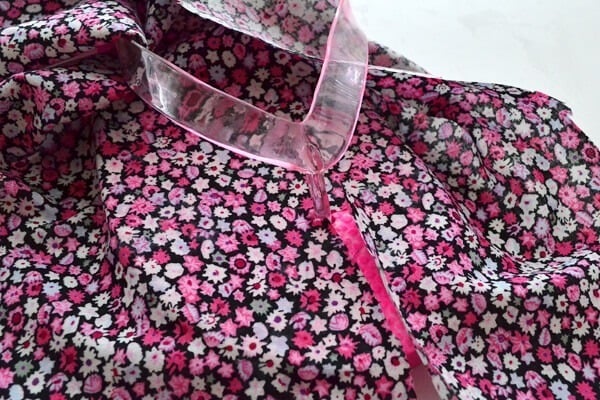 When you get to the toe thong area (note I didn’t do the patching beforehand? This was a failed attempt!) you’ll need to trim up as needed to get the fabric to lay nice and flat. If you have tons of overlap, you’ll feel it when you walk and it will be uncomfortable. So go slowly and take your time. 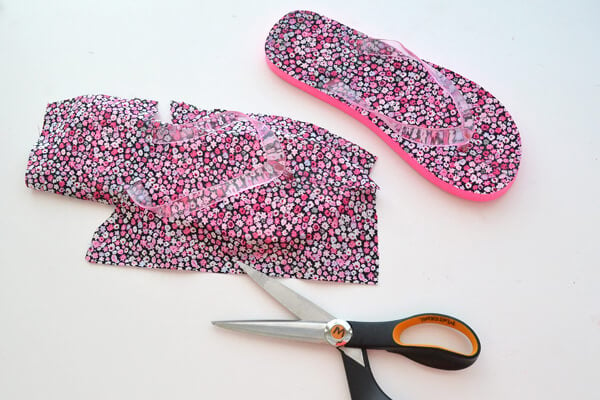 When the fabric is completely dry go around and trim up the excess fabric away. And don’t be discouraged if your sandal looks like total crap before trimming down. That’s just the way it is. 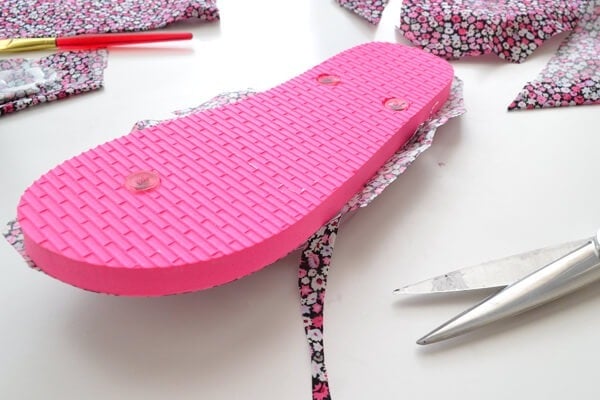 I found the best way to get a nice, clean cut was to turn the flip flop over and trim that way. 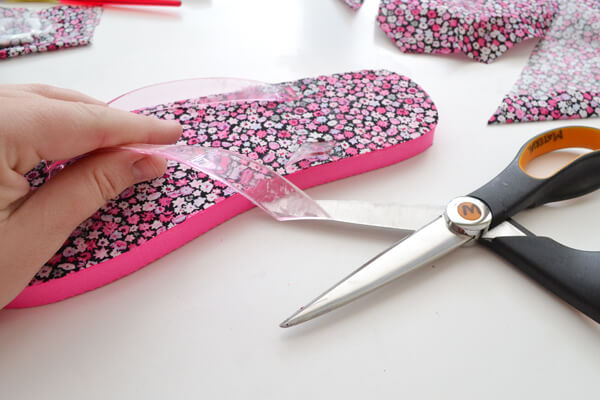 But pay attention because you can and might accidentally snip through your strap. This was right at the end of trimming this sucker up. then it was off to Michael’s for another pair!

But when they were finally done my Momma LOVED them. We’ve even started another pair for her.

And if you’re wondering, the fabric is comfy and wears really well. So far they aren’t fraying that I know of which is pretty sweet! 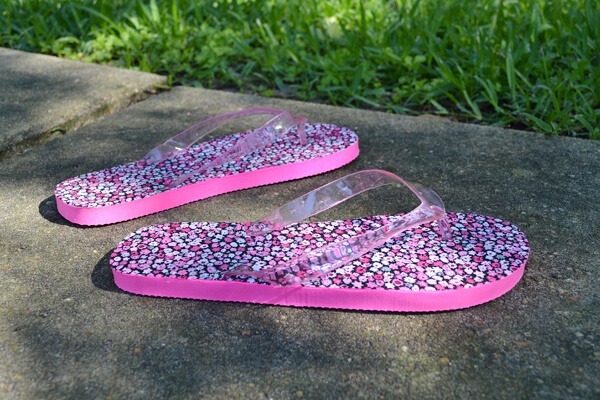 And if you’re wondering why we didn’t just pop out the straps and then pop them back in, it’s because we actually tore the rubber on one and it was a total loss. Instead of

I'm a crafty cat lady with big dreams and an inability to sit still. I make it, I live it, I love it. Here at Dream a Little Bigger you'll find lots of inspiration for crafts, crochet, DIY, food, pet life and all things rainbow. Lots and lots of rainbows.
655 Shares
Pin645
Share10
Tweet
This site uses cookies: Find out more.