Add a little flair to store bought with a little bit of time and yarn. These crochet edge dish towels may be simple and inexpensive but they’ll jazz up the handle on any oven and make a fantastic gift.

I’m afraid at the moment I’m feeling quite contrary. Everything I need to do, I don’t want to do. Actually, it’s more like, anything I need to do I’m DREADING doing. For example, I need to source some material for work. This is something I normally quite enjoy but the last few days? Nuh-uh. I spent yesterday scrubbing the floor the whole house instead of doing it. Like, down on my hands and knees scrubbing about a thousand square feet of tile and grout with a toothbrush and a bucket, instead of sitting at the computer and working.

I also need to unpack my suitcases from my last trip. But seeing as how in a few weeks I’m back off again it hardly seems to make sense. Granted, I’ll need to change things out from one trip for the other but still, I had planned to do it and didn’t. Again, DREADED it. So do you know what I did instead? I made and canned a bunch of jam. And when I ran out of jammin’ stuff I went to the store and bought some more! That suitcase is STILL sitting on top of my vanity and my travel bag is still on the closet rug waiting for some attention. But, man, we have some jam.

These lovely crochet edge dish towels up there? I made these in April but I didn’t want to weave in the ends or edit photos so it’s taken me 4 darn months to get to where I’m at today, sharing them :) I don’t know why sometimes I don’t want to do the things I need to do, I just know that I don’t. And sometimes I won’t.

I am, however, super into overalls. Ever since childhood I’ve figured they were the best outfit ever. Let’s look at the facts… you typically get pockets. Either some big ol’ ones or a lot of them. They don’t put any pressure on your middle area (when my I.C. acts up or when I have a flare up of this recurring UTI my insides just plain hurt) and they’re freaking cute. Whenever I find a cute pair, I buy them. In fact, GAP overalls are, like my jam. I’ve spent far more on a single pair of overalls than I ever have a pair of jeans. And so, this morning when I should have been writing this post, I kept finding myself drifting around the internet purchasing even more overalls :) But, the good news is in the guilt I felt window shopping online, I figured out 2 different Halloween costumes I’m going to try and work up with pairs I already have. Cool, right? Heck, last year I was a scarecrow where I wore, you guessed it, overalls! :) 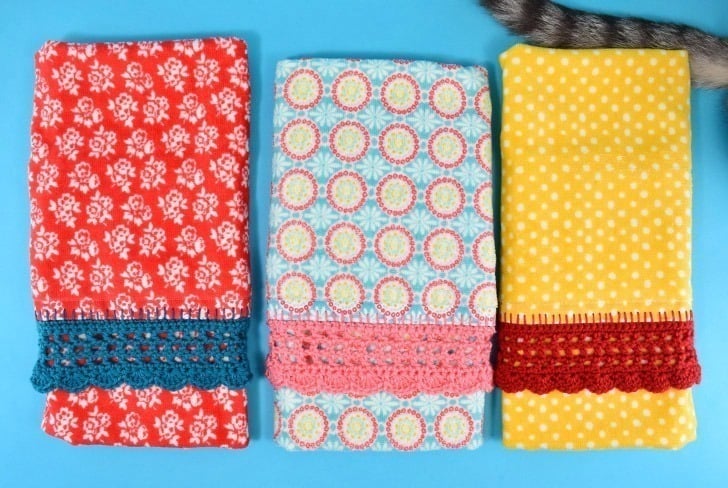 But this morning I was testing out my new birthday/Christmas present from my parents (a new convertible laptop that means I can edit photos right on the screen with a pen, which is SO COOL and SUPERFAST!) and suddenly editing these 4-month-old pics seemed like a grand idea. And so here we are!

I made tons and tons and tons of these dish towels this past spring and these are the only ones I still have around to photograph. In fact, these are the ones I hooked up for my Momma and I’m sure she’ll be happy I’m finally done with them so I can send them on their way to her :)  Basically I found a little pattern of filet crochet empty blocks and shell edging that worked for pretty much ANY patterned towels. My mom’s are Pioneer Woman dish towels from Walmart made for the kitchen. My grandmother’s towels are actually thicker and made for the bathroom, graced with pretty blooms that are blue and purple and pink and yellow. Mine, are all over the place :) I’ve got puppies and cats and doodles and all sorts on mine, but the one thing that ties mine all together is that they’re all pretty badly stained already :)

Also, did you spy the kitty tail up there? 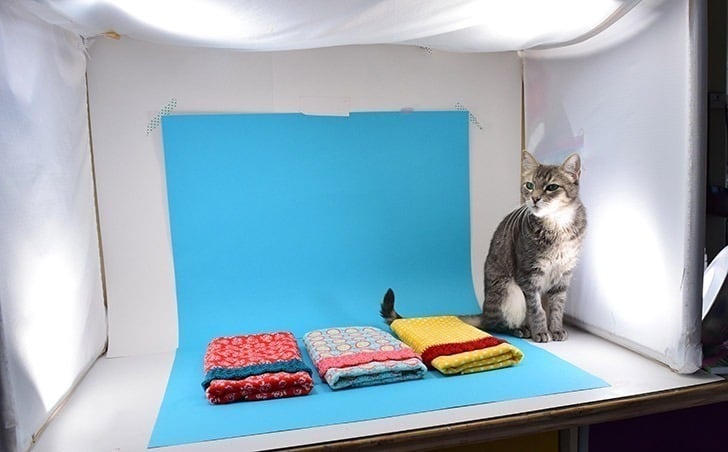 Here’s a quick behind the scenes of me trying to snap pics with a friendly, if a bit nosy, kitty around :) Cats. I love ’em. 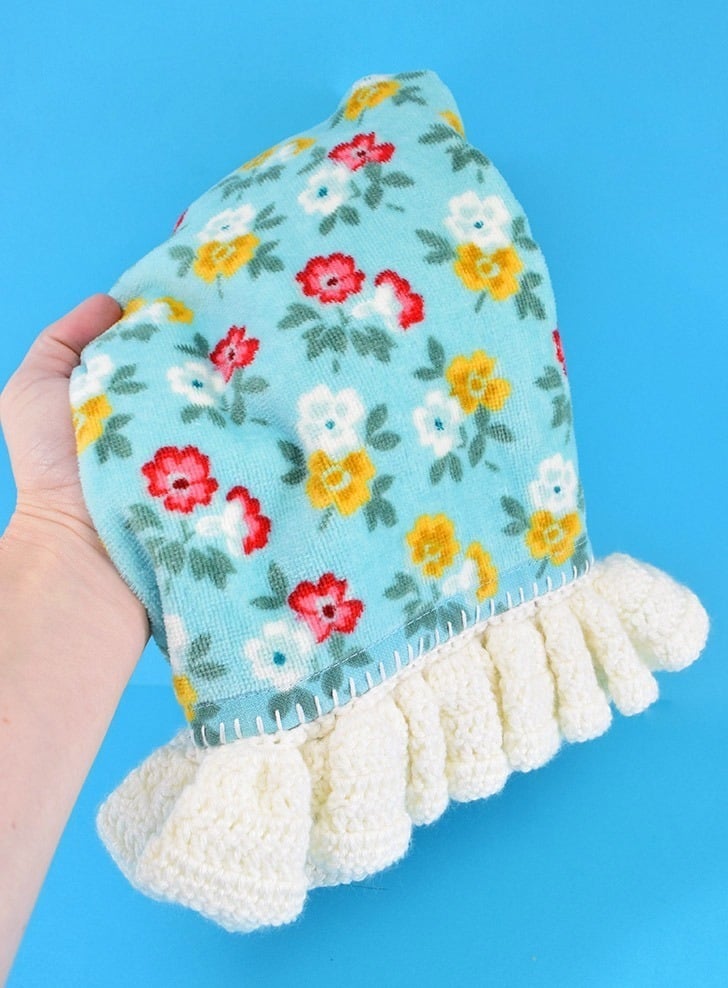 Since I did hook up a ton of towels I did experiment quite a bit before I found a pattern I liked, fit with any colors or patterns and worked easily with different stitch counts. One of my tries was to edge with a crochet ruffle and wouldn’t you know it’s super pretty? But it’s also super HEAVY. Womp, womp. But if your towels are just for show and not for use, you can check out how to crochet a ruffle edging here, but they might be a bit difficult to keep on a towel hanger since they are much heavier on one side, but if you love the look you might want to give it a go. Worst case scenario, you rip it out and start over which is basically my life in a nutshell :)

Now, no matter if you decide to crochet edge up your towels with my pattern or one of your own making you’ll need a way to attach the yarn to the edge of your towel, right? Notice those vertical stitches along the bottom of the towel, but above the crochet work? That’s an embroidery technique called the blanket stitch and it’s super easy to do. Basically, you’ll need to mark out on the edge of your towel a little dot for every 0.25″. Now using those marks as a guide, create a blanket stitch along the edge of the towel in embroidery floss to match your yarn. Learn how to do the blanket stitch (even around corners!) here. 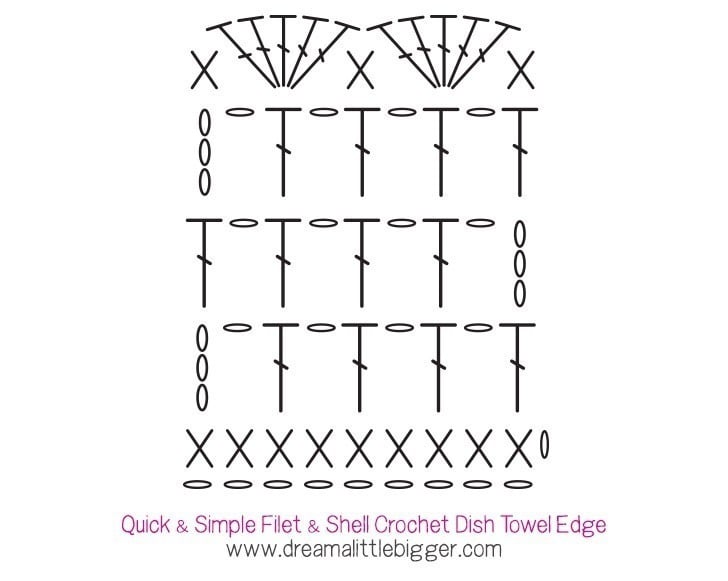 Once you’ve gotten the blanket stitch attached as your base, you’ll need to count out your number of stitches and work out your pattern using that base number. Our pattern is worked on a count of 8 + 1 stitches.  This works perfectly for my towels which have the first row with 81 stitches (Here’s the math on that: 8 x 10 = 80 + 1 = 81), but with different towels and starting stitch counts, you might have to finagle the pattern a bit. On my grandmother’s towels, which were half an inch wider than these in the photos, I just added another single crochet on that last row to each end to make up the difference and keep the pattern mostly the same.

Up there is the basic pattern. I’ve got a chain along the bottom of the chart, but those are actually gaps in the blanket stitch on the towel. I just wasn’t sure how to mark that on a chart :) It’s super easy to follow and the first row is single crochets, followed by 3 rows of a filet stitch type of thing with chains for gaps to make the pretty square mesh in the design. The fifth, and final row is a simple shell stitch edge. Want that business in crochet terms? 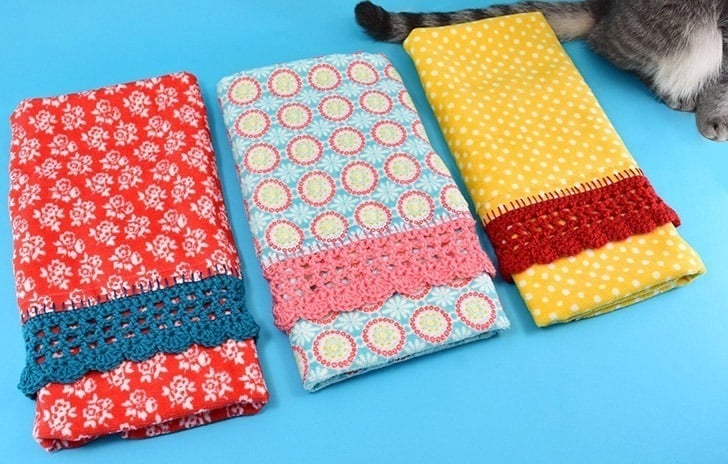 Blanket stitch at 0.25″ apart on the edge to be crocheted. 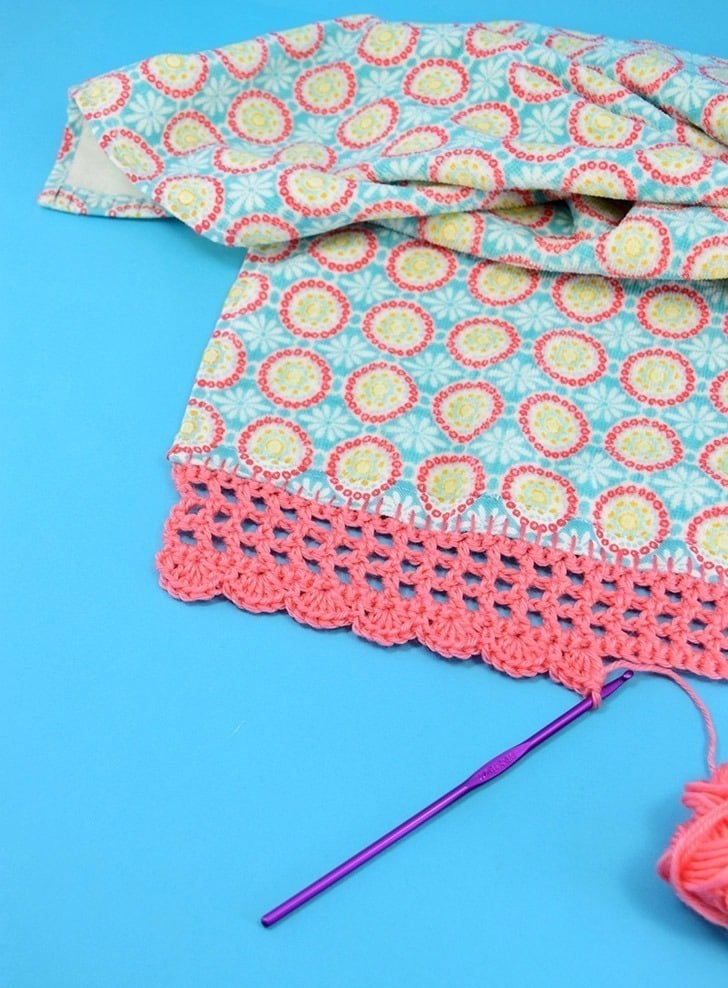