Want to surround your crochet project with a fun frill with ease? This crochet ruffle could NOT be easier and it doesn’t matter how many stitches you have!

For some reason, it’s taken me quite a while to embrace a crochet border. There’s this part of me that is super antsy and wants to get things DONE. And so I finish up an afghan and after hours and hours, I’m all sorts of over it. Heck, I have an afghan in the top of the closet I straight up made in Oklahoma that still needs to be blocked. That was at least 3 years ago.

But there’s something that happens when I don’t feel well. Normally I buzz, buzz, buzz all over the place moving from one project to the next. I’ll start a load of laundry, begin painting some wooden beads, start making a new DIY soap while that paint dries and the spin cycle is going, then move the wash to the dryer, edit a few photos while everything sets up, maybe do some other computer work, run out and put the laundry away once the dryer dings and start it all over again.

Recently I was told that I’m not doing anything more than I should be doing. It should be the responsibility of the one who works from home to keep it clean because it’s easier. I agree that it’s definitely easier to do a quick load of wash when you just have to run across the house instead of across town, but being in the position to take care of both work and chores in the same space can be super stressful. 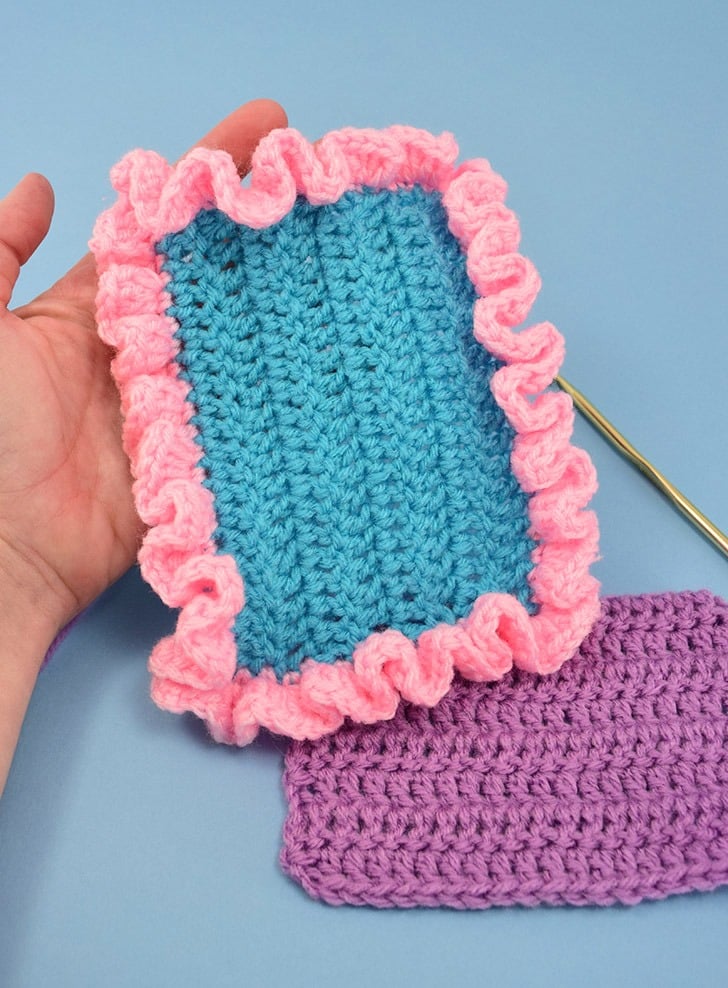 I feel like I HAVE to keep things clean because that’s who I am. I can’t live in a dirty house. Just can’t. And if push comes to shove, I won’t. And so when I make my list for the day of work it looks something like:

It’s a jumble of personal stuff, house stuff, work stuff. My life has no clean lines or divisions :)

But then, sometimes I get sick. And last week I got really, really sick. Like, I missed a flight sick and I was so looking forward to taking that flight. Most of my week was spent in bed and most of that time I was trying to sleep off a high fever. When I did do something I just didn’t have the energy to multi-task. And so the house got super messy. My plants out front died. The air filter never got changed. And the earth stood still. Just kidding. I just worked on one project at a time on the off chance I even felt up to it. Which is pretty much the same darn thing as the earth standing still for this busy bee :) 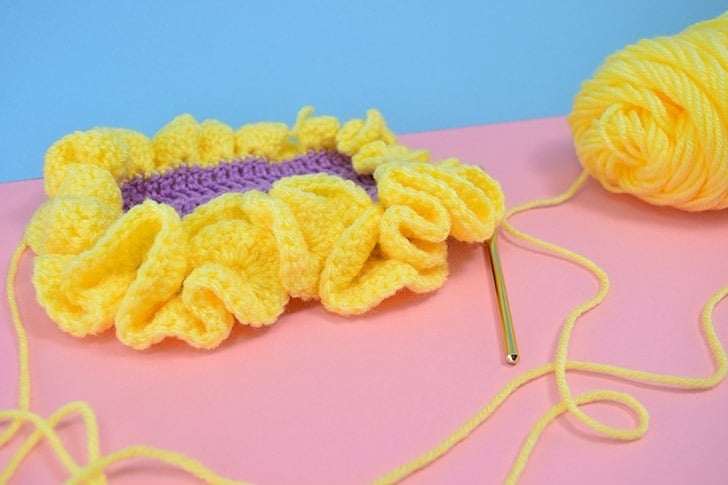 When I don’t feel well and move more slowly I have a tendency to work on things longer. I have more patience. And during one of these times I realized just how much a border can add to a crochet project. It can help a hooked piece look handmade instead of homemade. Your project goes from being done to finished. And it’s pretty nice for not a whole lot of extra effort.

One of my favorite edges is the crochet ruffle. I remember trying to learn some years back and I could never get the right number of stitches all the way around to accommodate for this pattern or that. So when I was hooking up my most recent piece which HAD to have a ruffle around the edge, I decided to invent my own way of doing it, no matter the stitch count. And guess what? It might not be the “right way” but it works perfectly darn well.

Want to add a crochet ruffle edge to your afghan easy peasy? 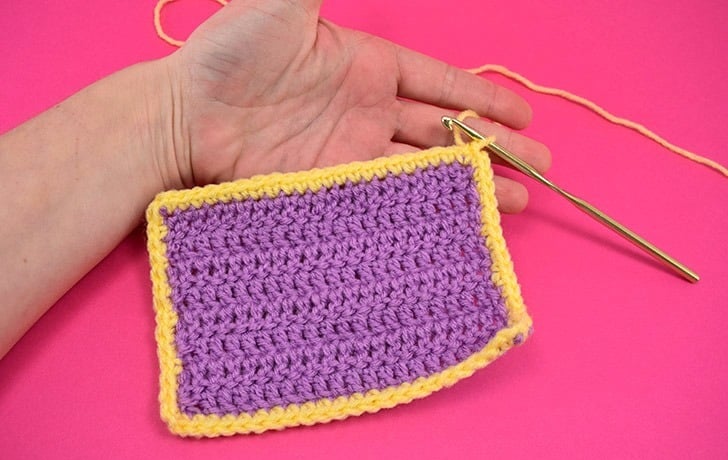 The first thing you’ll need a clean edge to start your ruffle. A single crochet edge is a great way to clean up uneven sides and have a great blank slate to start an edge. If you need help with this step, you can learn how to create a single crochet border here.

As far as your ruffle goes, it doesn’t really matter where you start. It doesn’t matter the number of stitches you have to cover and it doesn’t matter what color you use. I typically like to use the same color for my single crochet around the edge as I do my ruffle, to make it a bit fuller looking, but you can go with the color of your base or you can make it a third color for an interesting visual pop between the two.

To start chain 3 times. This will act as your first double crochet. 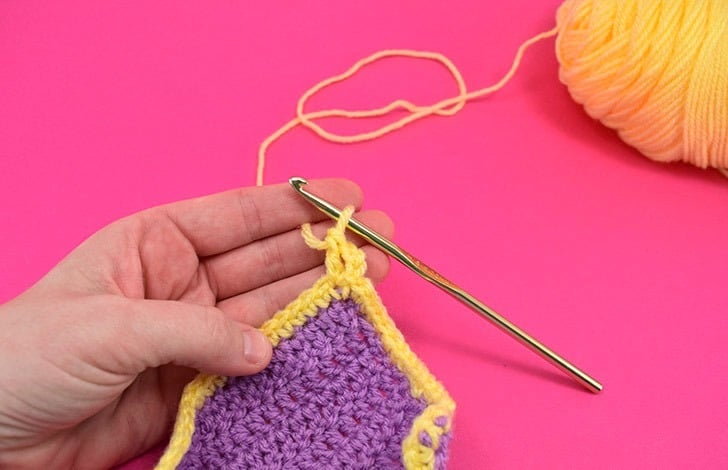 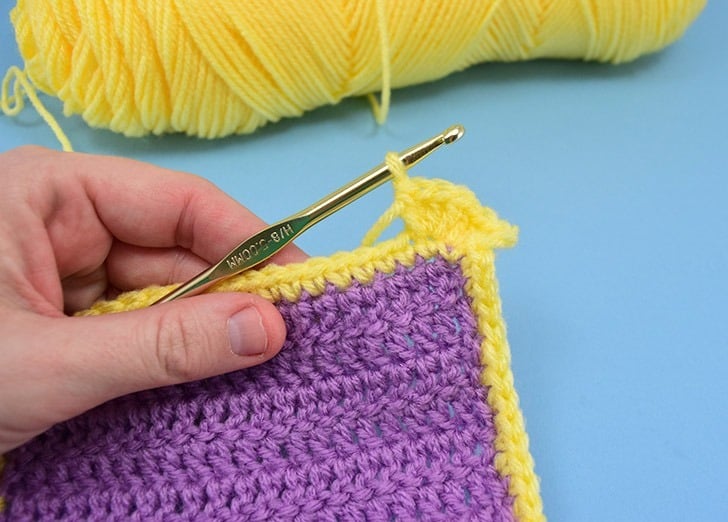 In the next stitch, double crochet 4 times. 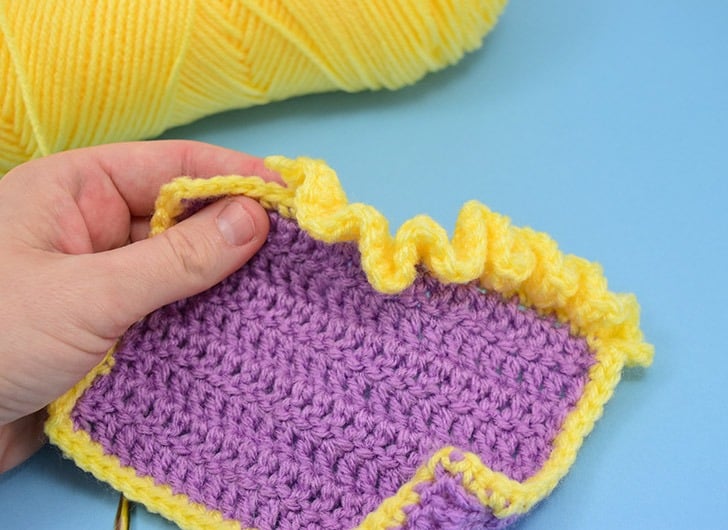 Continue around the entire piece creating 4 double crochet stitches in the next single crochet from the previous row. 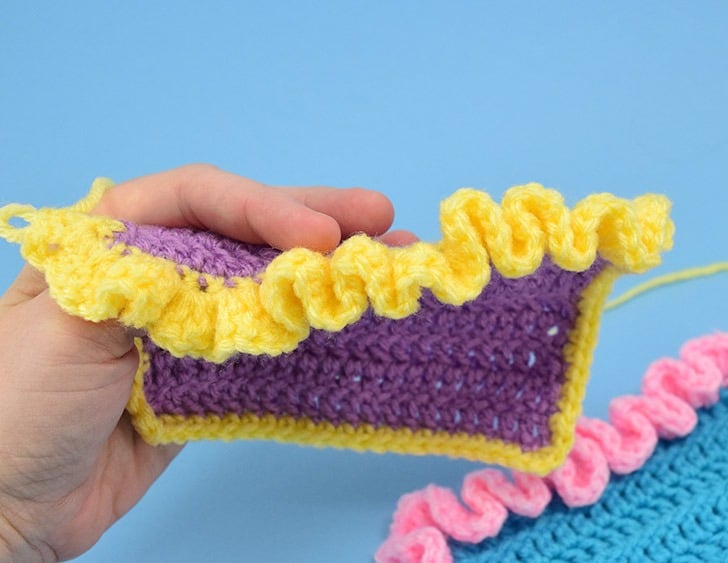 As you work your edge will fill up with lovely frills. 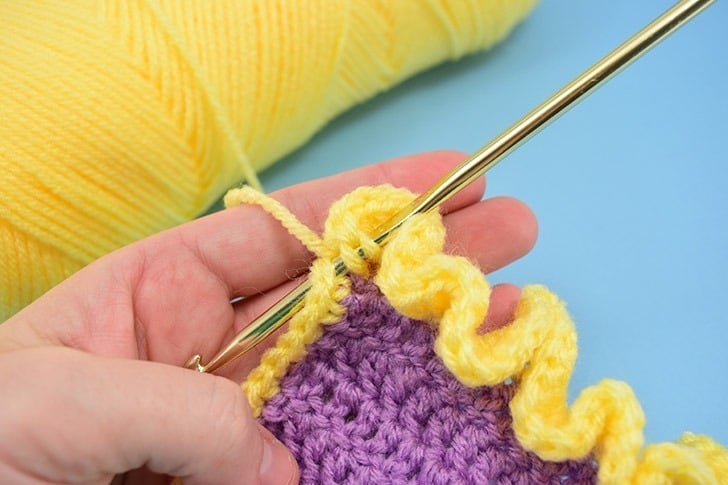 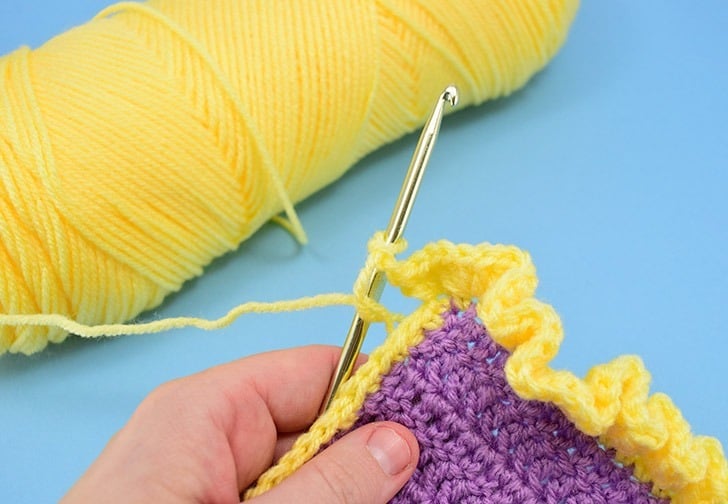 Continue down the next side with your 4 double crochet stitches per stitch across and make that next corner just like in the step above. When you reach the beginning simply slipstith to your first chain 3 to close the row and finish the ruffles. 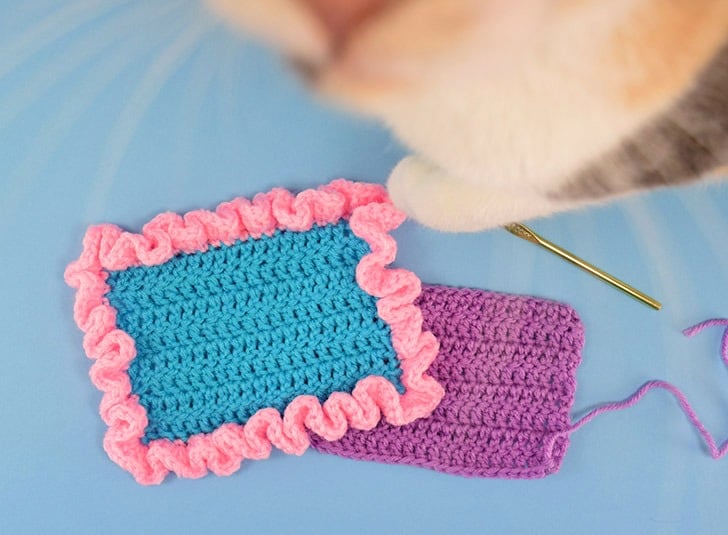 If you’re happy with your ruffle at this point, aces. But if it needs to be a bit larger you can continue adding rounds to grow the ruffle to be bigger and, if you’d like, frillier. 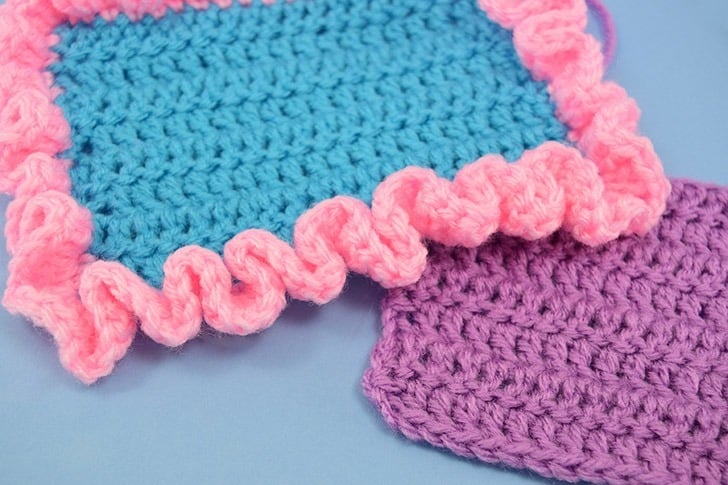 But if you want something fancier and frillier, on your second round double crochet TWICE per stitch in the previous row. Things are going to get frilly and amazing and maybe a little out of hand. Look at that ruffle. SO MUCH FUN, right?

As you continue out you can continue increasing the stitches, keeping with two per round or you can go down to the single crochet per the previous stitch to hold it steady where it’s att frill-wise but keep growing it in size outward to match the project you’re working on. And there are no rules here, really. You can make your frill frillier, but not so quite so much simply by alternating 1 and 2 double crochet stitches per the previous stitch so it gets busier, but not quite so much. Honestly, just play with it and see where it leads you. Work whatever looks best on your project. 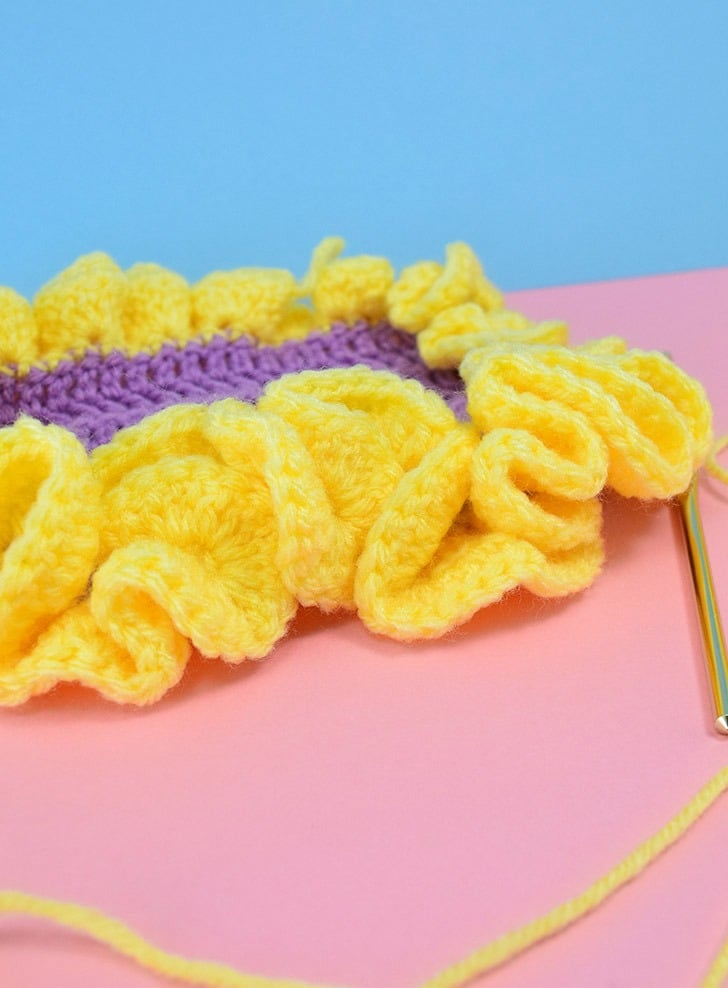