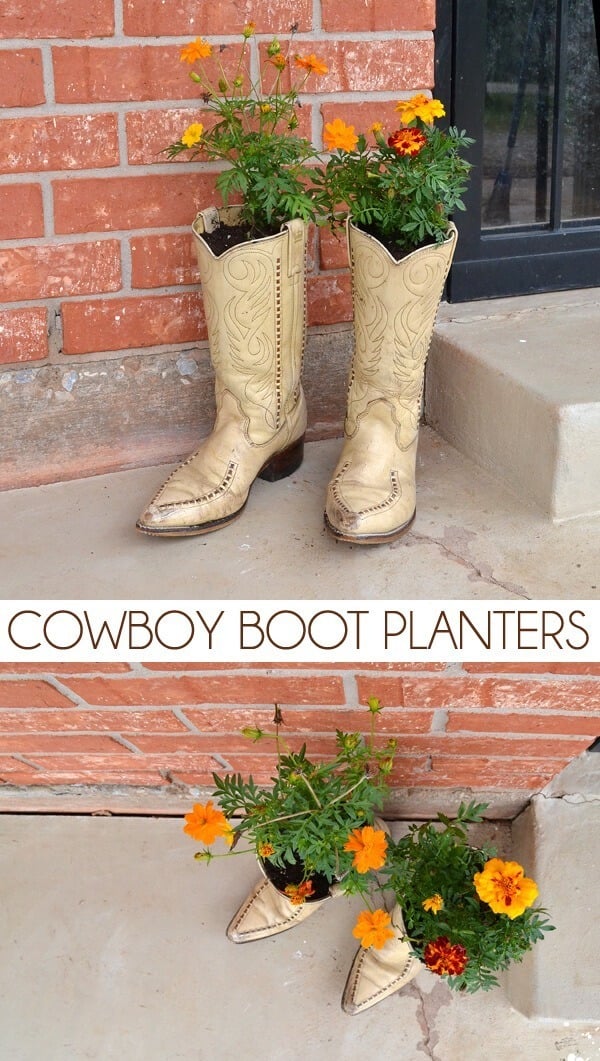 I don’t know why but when I was little my Poppa called my cowboy boots my “cow kickers”. I’ve looked and this is not a common thing to call cowboy boots, unless I’m just looking in the wrong places! Nevertheless when my age was still in single digits I’d rock my red cow kickers, often with pink sweatpants and maybe even a Permian Panthers Mojo tee shirt. I was styling.

Guess being born in Texas and growing up in Oklahoma I learned the importance of a good pair of cowboy boots. Do I have cowboy boots now? Freaking of course I do! Now they’re no pair of Justin lace up Ropers but what can you do? Freaking wore the fringe clean out on those back in the day! Very cute with a denim peasant blouse… obvi :) 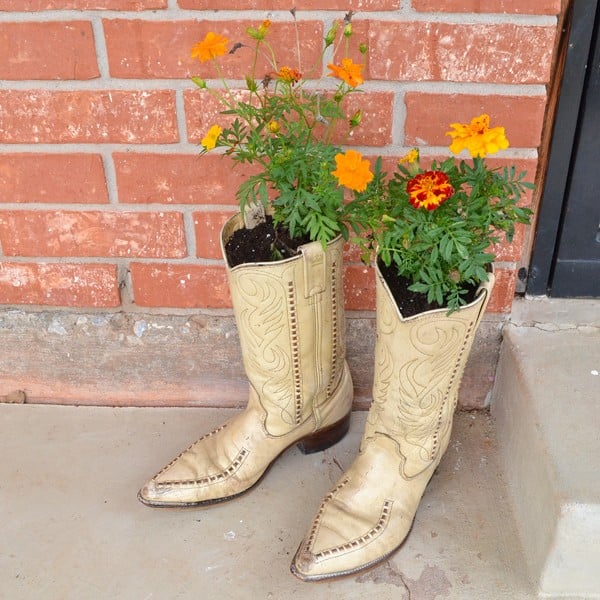 For ages now I’ve been obsessed with the idea of  having a pair of cowboy boots, looking as though they were left out on the porch by the front door brimming with flowers out of the tops. Like in almost as many years as I’ve owned this house I’ve thought this was absolutely genius. But the thing is around here people wear their cowboy boots clean out. I wasn’t going to buy a new pair (even a cheap pair is going to run $30 or more) so I was stuck with the idea of thrifting. Now I found a few pairs in those years but they were often ugly or just totally nondescript and I even bought a pair for $3 once but I was never inspired to actually use them. 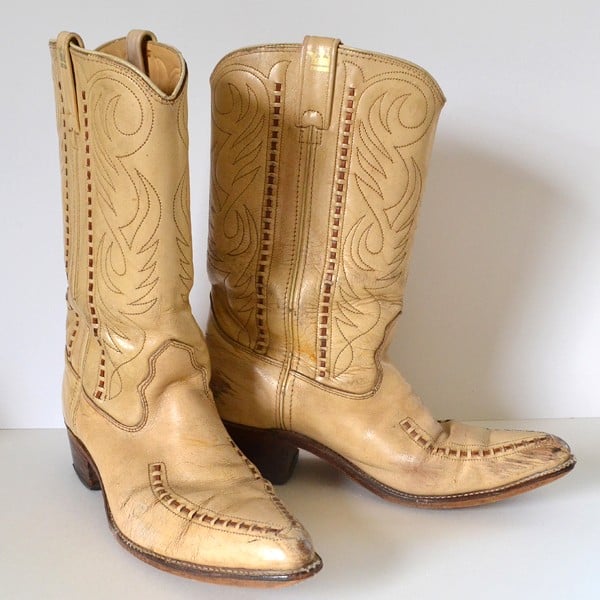 Tooling around my sister’s town garage saling (because it’s somethign we do… often) these boots were on the drive way. I tried to play it cool but I just couldn’t. Luckily the chick was super cool and offered them to me at $5 instead of messing me over and asking like $15. Because after all of these years, I probably would have paid it! I told her how her boots were going to be used and she smiled telling me how much she loved those boots and how much she wore those boots. I figured she’d be like, oh, heck to the no are you going to shove dirt in my BOOTS! But she actually thought it was a great idea! Maybe one day she’ll stumble across this and see just how her boots became planters! 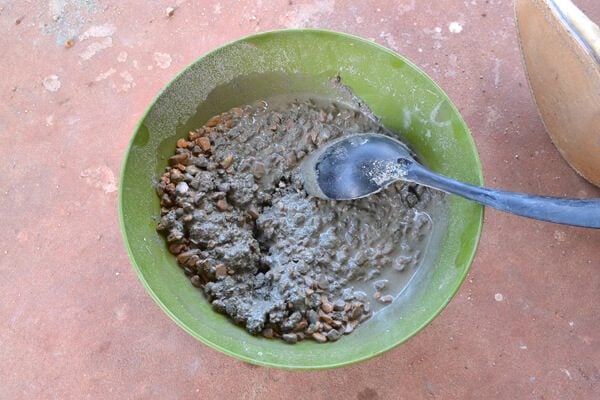 Fill the bottom of our boots with concrete or gravel. I went with concrete because it’s stupid windy here and I wanted tons of weight to hold my boots down. 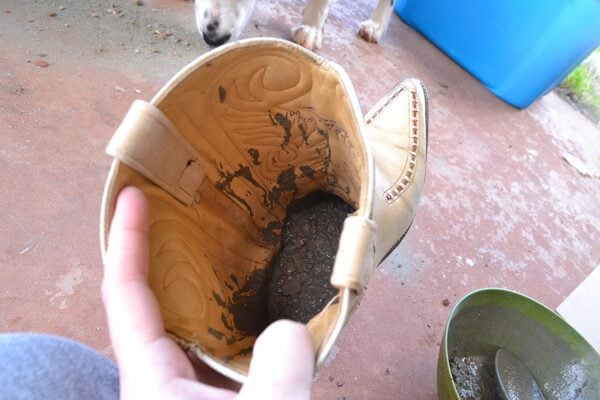 Fill through the entire toe area. Allow to fully harden. OH, and check out that dog down there. Dummy had to be put inside because he wanted to EAT CONCRETE. Geez :) 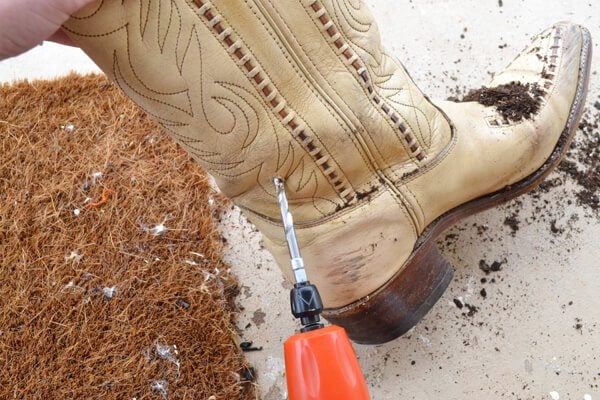 If you want, now line your boots with plastic so that the dirt doesn’t come in direct contact with the leather BUT you won’t be able to make drain holes (not that I can figure out anyway and keep the leather totally dry). If you aren’t too concerned about the leather use your drill to make several  holes in the boot to facilitate drainage. I placed mine in the back-ish area like you see here because this area will be less visible how I wanted to place my boots. 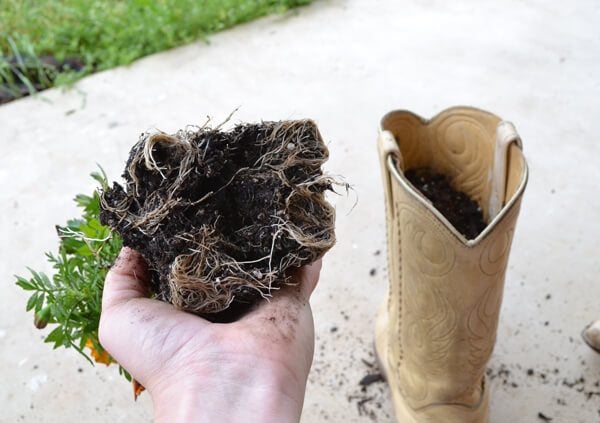 Put a layer of gravel on the bottom to help drainage and then fill the boot about 3/4 full of potting soil. Break the root ball up to help the plant be able to get bigger. Not sure why, but in my family we call it rolling the roots. 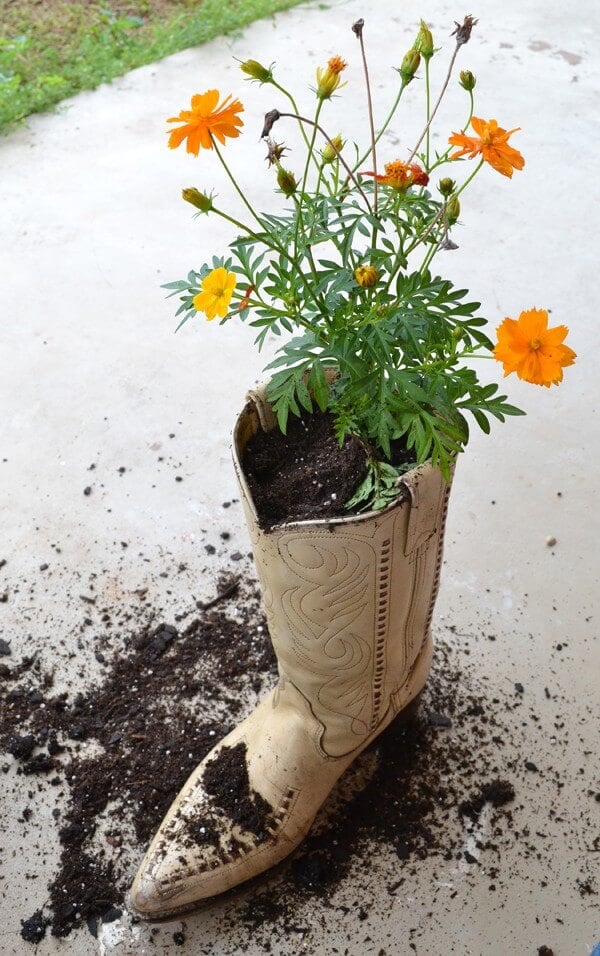 Add your plant and any more soil you might need. Tamp the dirt down so it is nice and firm. Water the plant in. 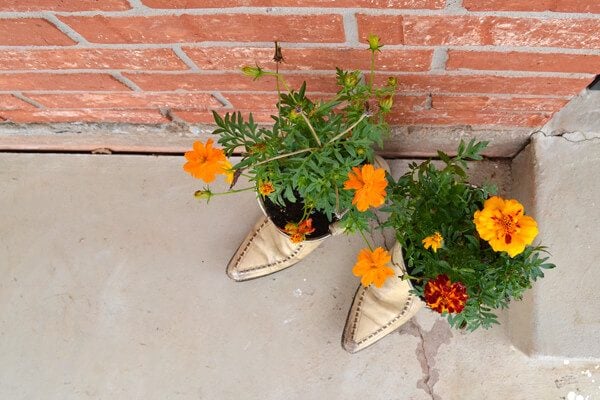 And can you believe how cute that is? That’s what I see when I look down from my step as I’m going into the house through the front door and I totally dig it!

Even though I have, as it’s been called, a long-ass country driveway, you can still clearly make out that a pair of cowboy boots have been left out by the door where cosmos and marigolds have taken residence and sprouted up!

So keep an eye out at garage sales and thrift sales to make your own cowboy boot planters OR make some rain boot planters or some sneaker planters! 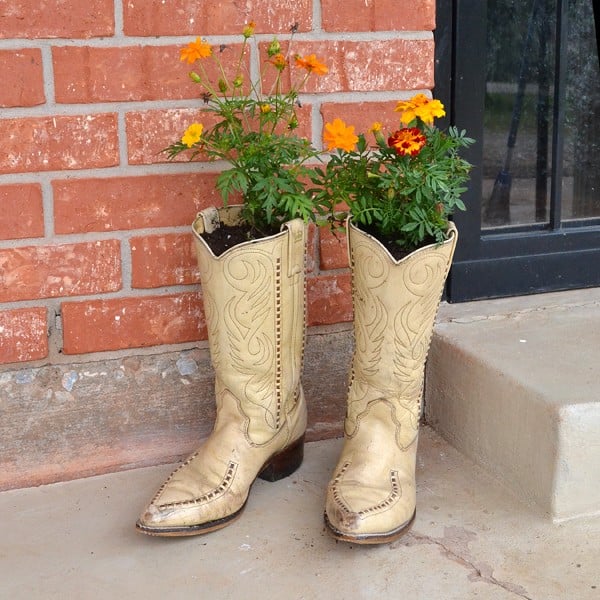