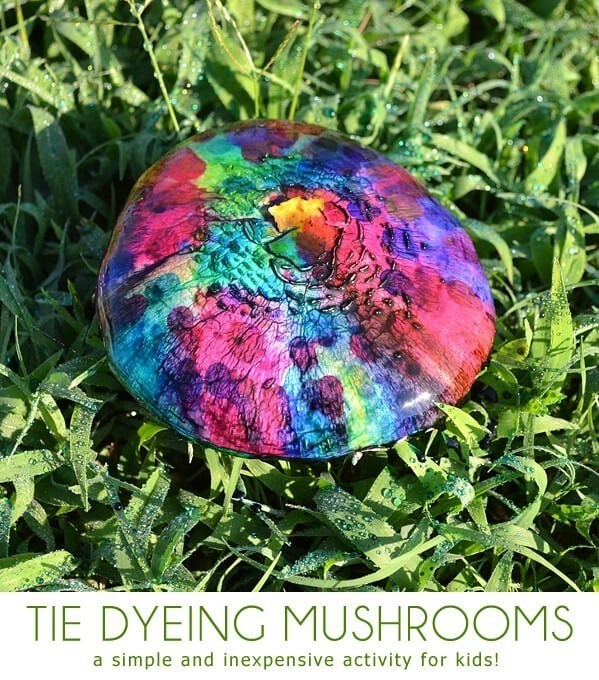 My Uncle Leslie is probably one of the most fun people I know. And he’s always been so, so fun. As a kid I had a photograph of him with my Aunt Lisa making snowmen. But unlike other people’s their snowmen were in color because they painted them. I always thought that was just the most awesome picture and it’s one of the things I think of most when I think of him. He is super fun to ride go carts with and fly down water slides with and he always will be.

Which is why I do my best to emulate him when I interact with my nephews. I never talk down to them because Leslie never talked down to me. I try to see the fun in the mundane because we could have fun eating at Arby’s with Leslie and Lisa for crying out loud.

So when we went on our big ol’ family vacation to Gun Barrel City this summer and he was showing us pics of his latest adventures, the nephews and I were particularly drawn to their tie dyed mushrooms. Apparently Uncle Skunk and Aunt Lisa made the fungi along a stretch of road a bunch of technicolor fungus among us inspiring smiles and double-takes from drivers and passengers alike.

So when we stayed in Houston for several weeks after our vacay we had DAILY checks for mushrooms. The boys would go out and look around under the trees and get excited the morning after it had rained all night knowing that mushrooms had to be popping out soon. But they never did! Can you believe that?

And then when they went back to their town and I went back to mine, mushrooms started popping up in our  yards. And while we didn’t get to tie dye the mushrooms together, we sure as heck did it all the same! 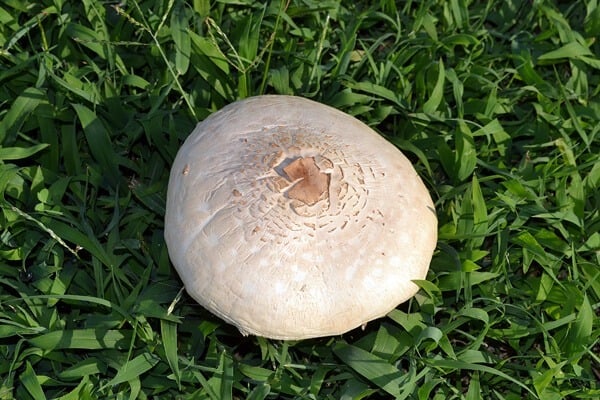 I know you can’t make mushrooms miraculously pop up in your yard so keep your food coloring in the cabinet and keep an eye out for any popping up around you. These guys started out the day I was going to mow the yard. But I refused to mow until I had gotten my tie dye on!

Also, you need to allow the mushrooms to open up all of the way so that the pores or whatever will take on the dye. If you try with a new mushroom that’s still tightly bound up it doesn’t really take on any color at all and when it opens up it’s so faint that it might as well not even be there. 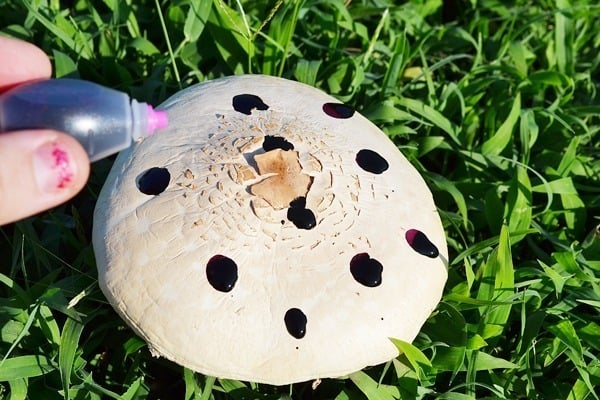 Since this was my first attempt there was a learning curve and I tried many different ways. Probably the neatest mushroom started out like this… I dropped food coloring directly onto the mushroom and let it sit and drip just a bit while I added more colors. 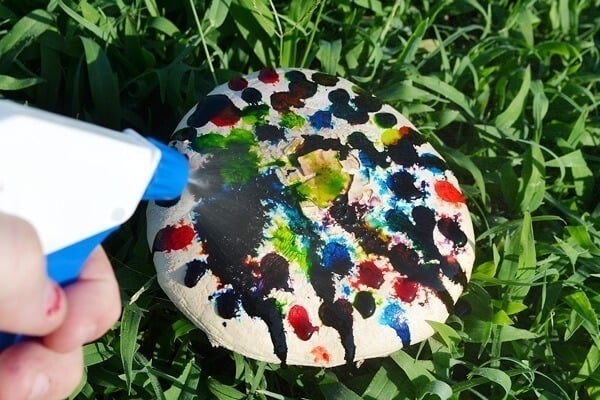 And I sat there and watched it drip for AGES. And I know I looked like such a weirdo in the middle of my overgrown front yard dropping food coloring onto mushrooms and taking pictures of it. My impatience got the best of me and I ran inside and grabbed my spray bottle filled with water and got after it. 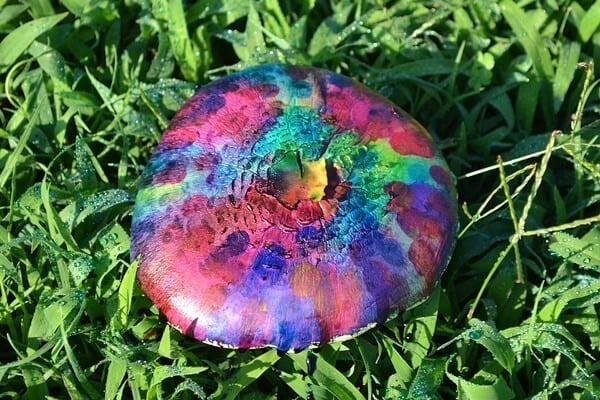 And it turned out like this! Pretty darn nifty, eh? 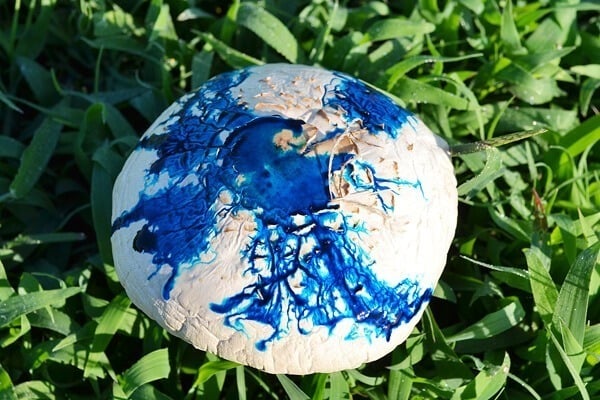 Next I placed a whole heck of a lot of dye right in the center and let it flow down on its own for a good 10 minutes. 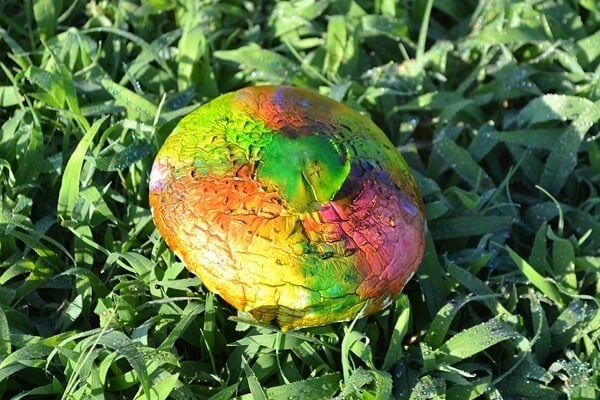 I kept repeating the process (with a few squirts of water in between) until yellow and blue made green and the entire thing was covered with dye. Which also shows that this is a great little exercise in color and how they mix to form other colors! 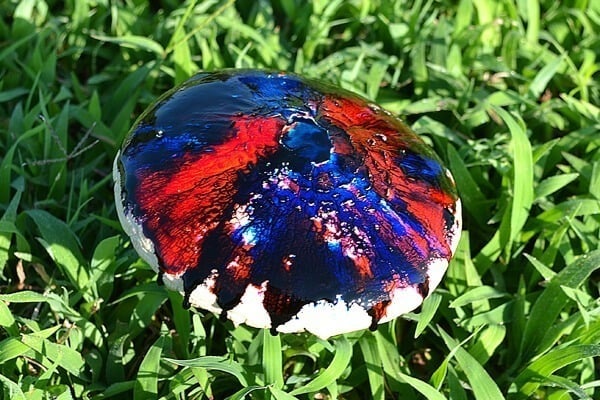 And for my last endeavor I sprayed the mushroom beforehand with water and then dropped dye, allowing it to drip most of the way until I got impatient and sprayed away to excess to see what I had achieved. 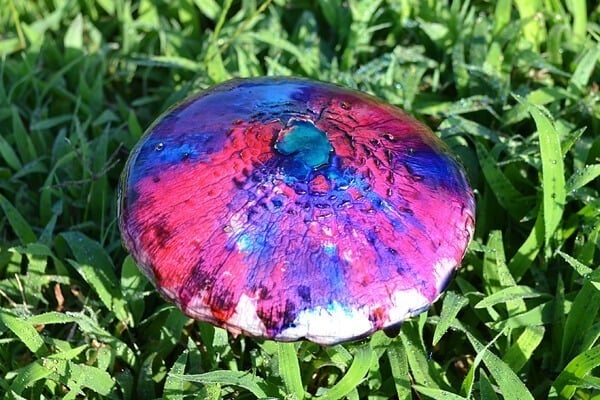 And it turned out pretty cool, too! 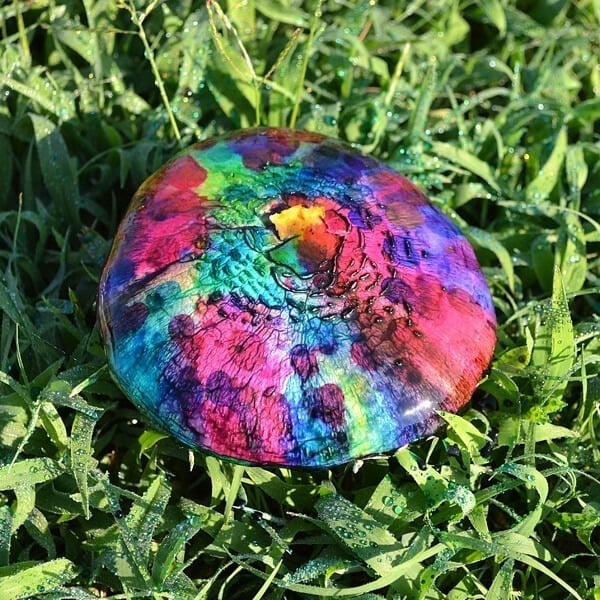 In the end my little polka dotted guy was my favorite and I was excited that the were a little colorful pop of color in an otherwise boring and overgrown front yard.

And I learned that the nephews had every bit as much fun as I did, explaining how their colors mixed and mingled and how their little temporary pieces of art had turned out. And to think, it only cost the few bucks for little bottles of food coloring!