Sometimes things just do not go according to plan. Like, at all. And sometimes when things decide to veer off course you have no warning that anything bad is about it happen.

I was sitting at my computer working when, seeing my phone silently lit up,  I realized that I had not turned the ringer on my phone when I got up in the morning. I grabbed my phone it to see what has been going down and my stomach sinks lower, lower, and lower. Ugh.

My bank had been trying to get in touch with me because a lot of money had been spent out fo my account. So much that my current balance is almost -$400. First off, I’m irked. I don’t have overdraft protection turned on FOR A REASON, namely that this has happened before. Not only did people take money from me, but they took more than I even had to give. Double ugh..

So I go online because I need to verify which were actually my transactions (um, yes, I did spend $120 on candy online last night, eep! But it was for Valentine’s Day gifts!) and which were not. I’m looking at you online music, video game purchases, plane tickets and computer software. And then I’m wondering, how do you buy plane tickets with a stolen debit card? Don’t you have to input lots of information about yourself? Does that mean they can catch this jerk? 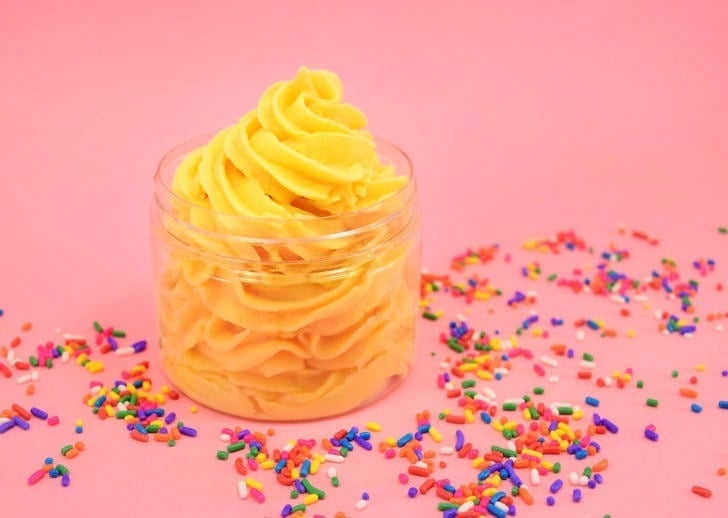 Luckily I was able to catch everything but one $10 charge before they were actually processed and most of the charges were reversed. But my card canceled, yet again, with a new one coming in a few weeks making  buying just about anything a total nightmare in the mean time.

After all of this nonsense, I was stressed the heck OUT. My shoulders were killing me. I had the headache from hell and I just wanted a nice, hot shower.

My shower was good and all but nothing special. I decided to make something amazing for my next… whipped soap. But not just any whipped soap… sweet-smelling, inspired by frosting whipped soap.

This stuff is amazing and so easy! Because we use a foaming soap base that is made to be whipped, you add your necessary ingredients and get after it. And what you’ve got is this amazingly soft and cready soap that holds scents beautifully and lathers up like a dream. It’s seriously one of my favorite things in the entire world. And scented like a cupcake it’s fun and whimsical and really lives up to its name… frosting whipped soap. Want to make some? 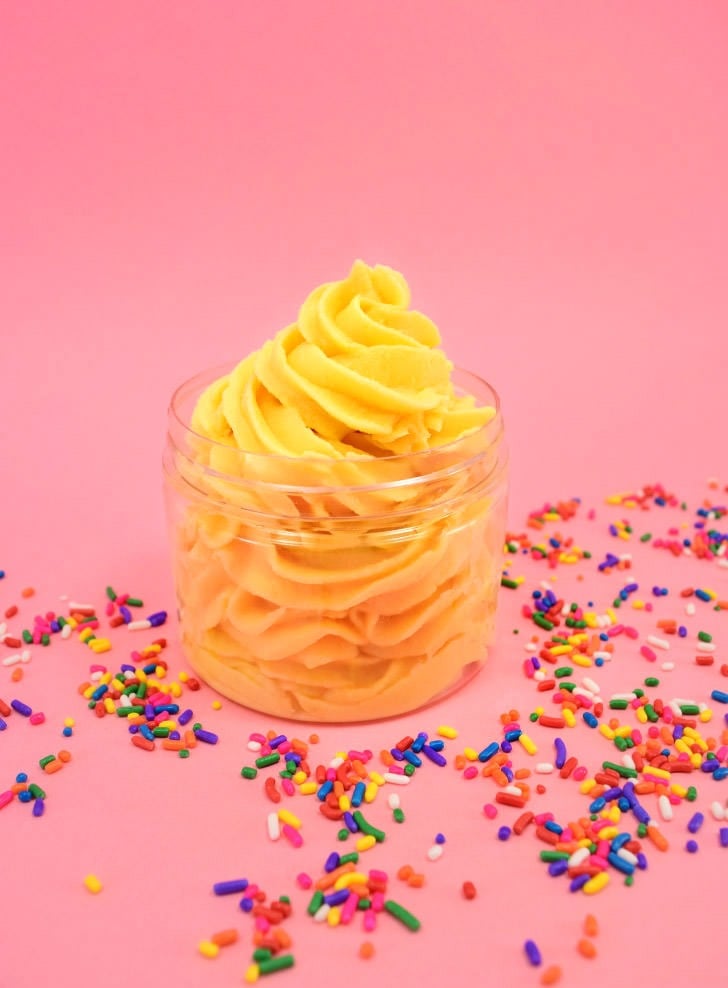 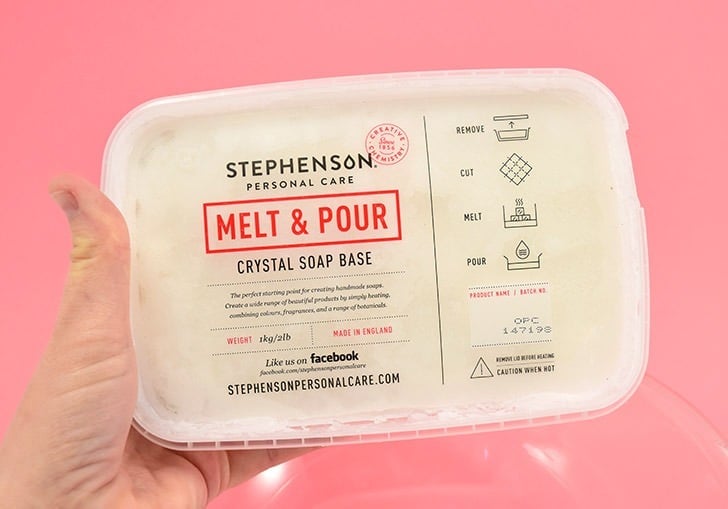 I linked to it above, but this is the business you want. This stuff makes making whipped soap SO EASY. You can’t even make homemade frosting this fast! :) 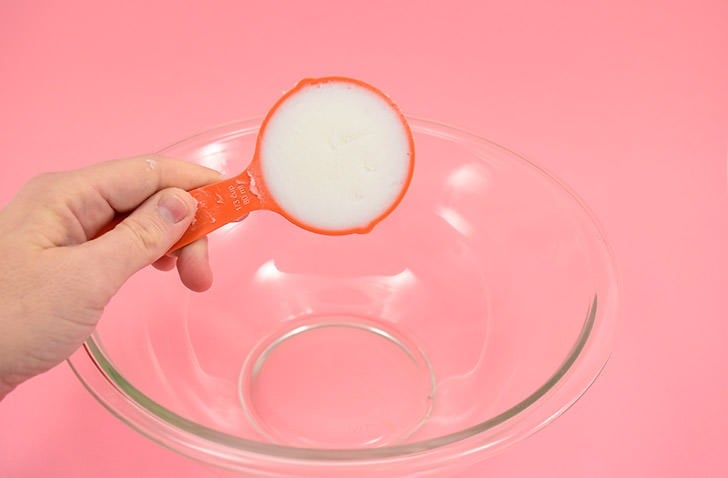 Measure out 1 cup of foaming bath butter into a medium-sized bowl. I’ve used plastic and melamine and glass and glass is my fave because you can see that things are mixing up well. 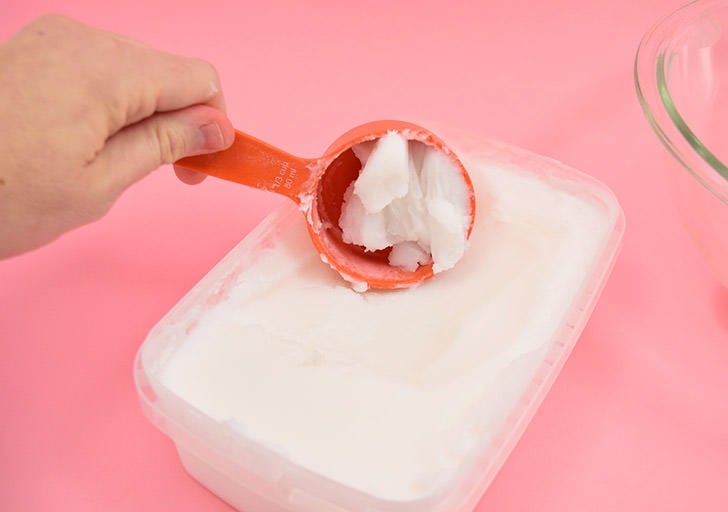 The easiest way to measure out your soap base is to scoop at the tub of butter because it’s too soft to cut with a knife like melt and pour and it’s too messy to try and spoon out and into a measuring cup. 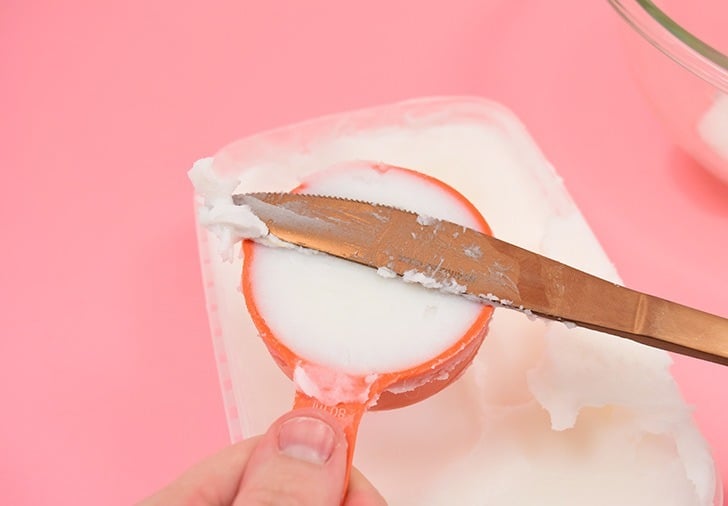 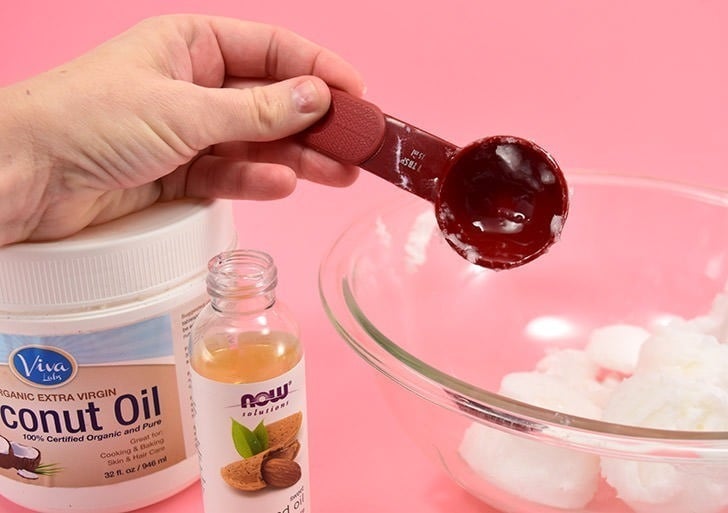 Add 2 tablespoons of coconut oil and 1 tablespoon of almond oil to your soap base. 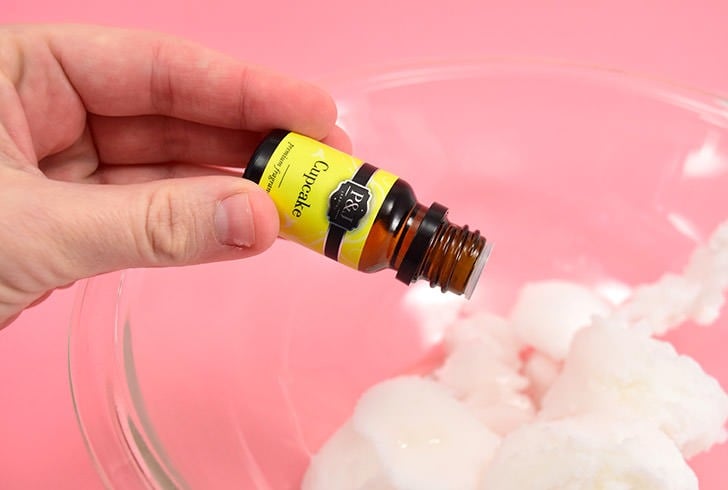 Add a healthy amount of cupcake scented fragrance oil to your base. I straight up used 1/2 a teaspoon, which seems like a lot, but I think the scent is pretty perfect. In all honesty, I probably used so much oil because the scent itself is kind of weak, but I just LOVE the smell so I roll with it. 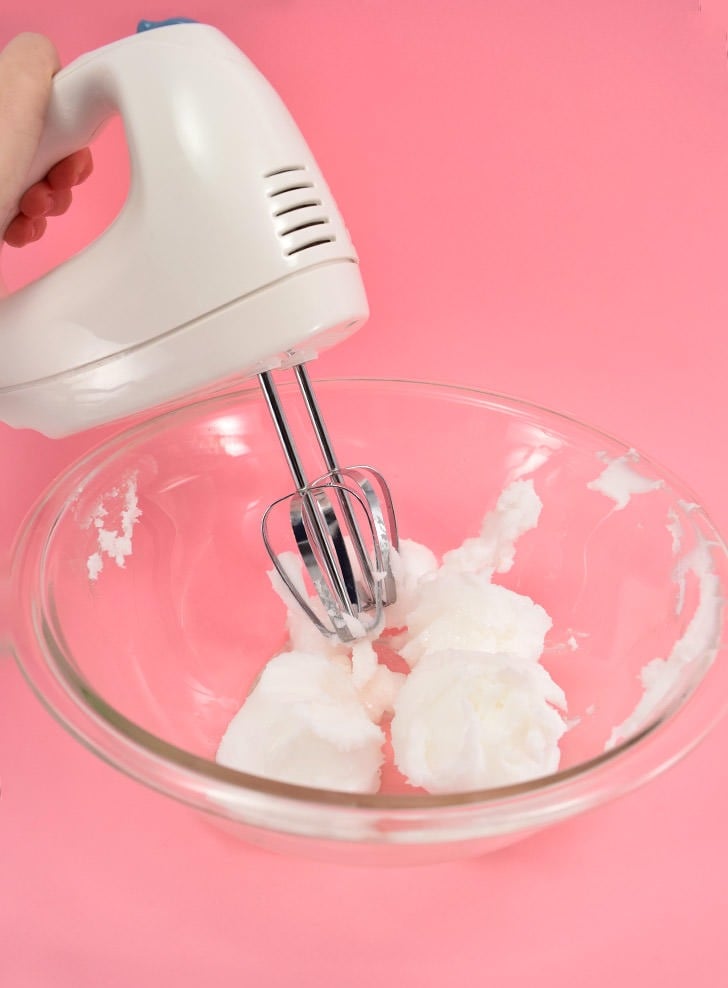 Now it’s time to bust out the hand mixer! Beat the soap base on a lower setting until it starts to become creamy. 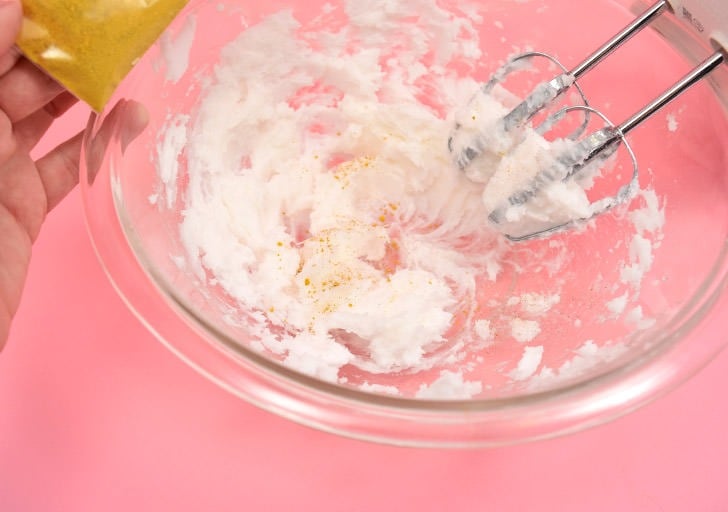 I have decided that I prefer using pigmented mica colorant powder to color my soap instead of adding any moisture that makes this business want to start sudsing up. You can pick up a sampler set with little bags of different colors for a decent price and you’re not committed to making a bazillion batches of yellow soap. An itty bitty bit goes a LONG way. Seriously, add just a slight dusting to your bowl. 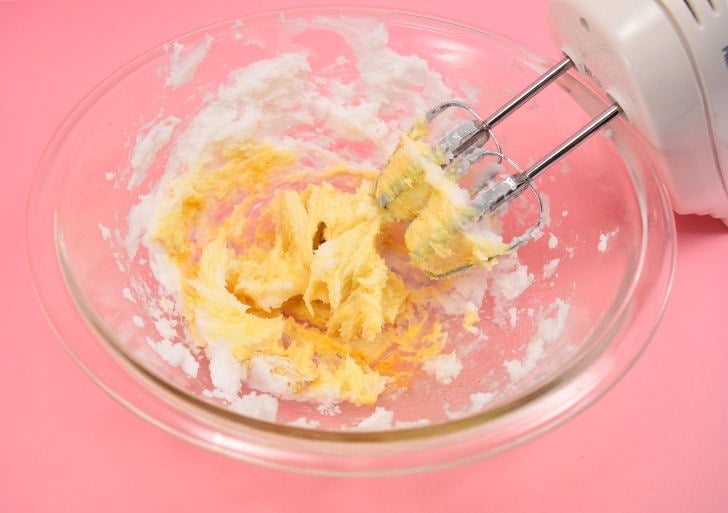 Begin to mix the color in. At this point you can set your hand mixer to a higher setting, a little bit more than the middle but not all the way full throttle. Beat until the color is uniform and the soap is nice and fluffy. 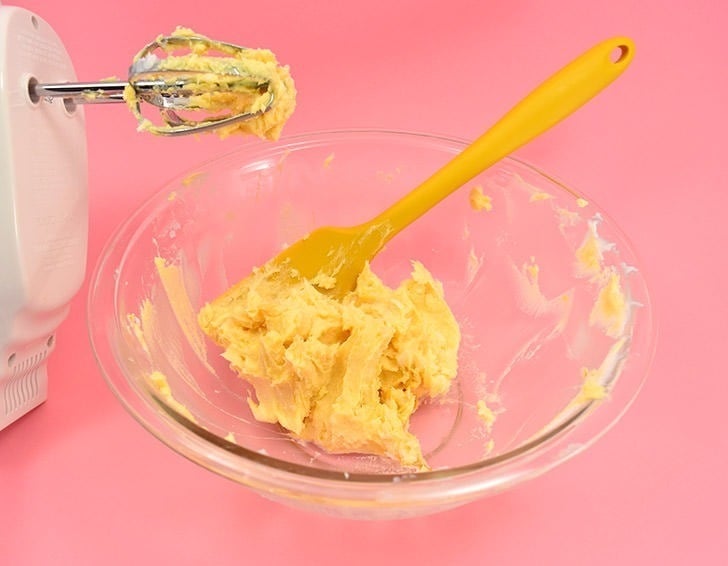 To get nice, uniform color it’s advisable to use a rubber spatula to scrape down the sides of the bowl and remove the soap from the actual beaters so everything gets colored well.

Scoop this business into a plastic tub and you can get ready to have the most deliciously scented shower! I piped mine in using a frosting bag but just for looks I in the pic, it all settles into the jar once you put the lid on so it isn’t worth your time unless you’re taking pics for a blog :)

When using in the shower or bath, try to keep the tub out of direct contact with water. I place my tub over to the side when showering so that water doesn’t spray right into it. A little bit sort of mists into it, but that’s fine. Just dip your fingers in and grab a bit of whipped soap and go to town. This soap is creamy, dreamy and will leave your skin feeling SO SOFT. You’re gonna love it! 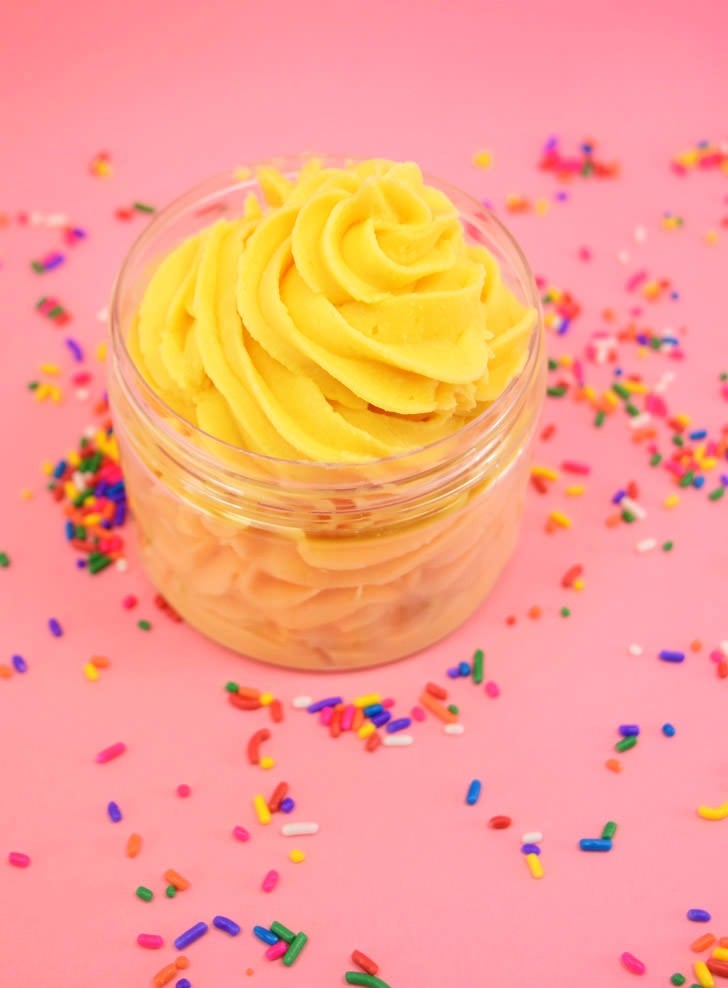