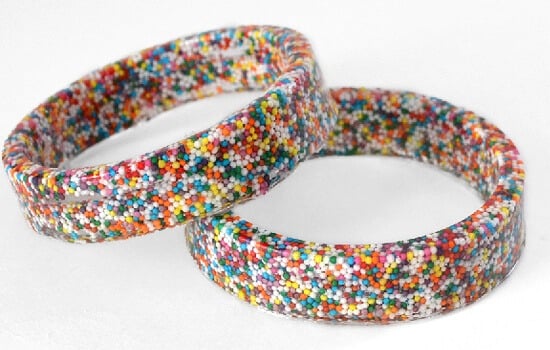 So a few weeks back I made a gold leaf suspended bangle. It was my first attempt at casting resin epoxy and I was hooked. Not because of the nasty fumes but just in general. I made this amazing looking bangle for next to nothing when it was all said and done. You know how many compliments I’ve gotten on that thing? It’s insane!

I went ages with this humongous can taking up space in my crafty storage and now I’ve used the whole thing up. There is NOTHING left in that can and all that I’ve made are bangles. Bangles, bangles, bangles. This first experimental go I wanted to have sprinkles and nonpareils suspended in the resin and went and started digging in my long forgotten box of baking supplies (I was starting a baking business when I found out I was Celiac and couldn’t handle gluten therefore making my chosen occupation a bit medically inadvisable) and dug my little fancy toppers out.

For this experimentation I used: 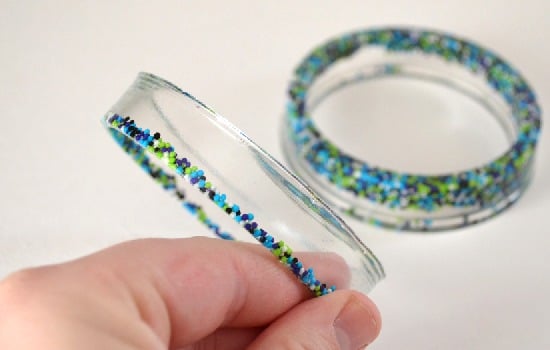 My very first go I used some black, blue, green and white nonpareils. I mixed up the resin, added the sprinkles, just like I did with the gold leaf, poured it into the molds and walked away.

When I popped them out of the molds the next day I was so disappointed. Everything sank to the bottom! 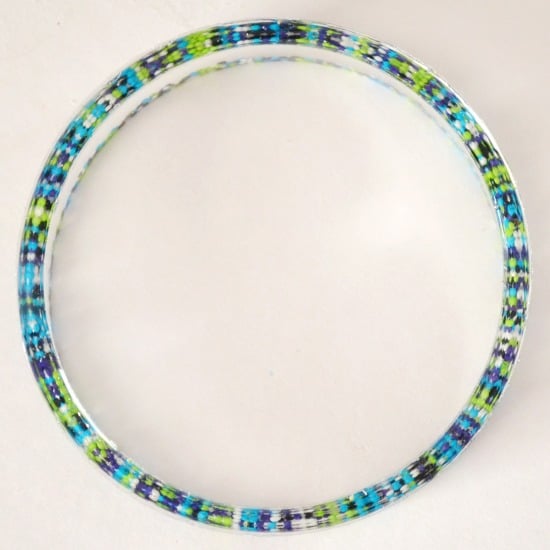 But they look really cook from the top. They sat on my desk for a few weeks and I’ve decided that I like them now. What had been a disappointment turned out to be pretty neat looking so I’m cool with that.

So next I busted out some traditional sprinkles. Since I knew they would sink I just filled the bangle mold with them and poured the clear resin right over them. I tapped the bottom a few times to get resin in all of the nooks and crannies and, again, walked off. 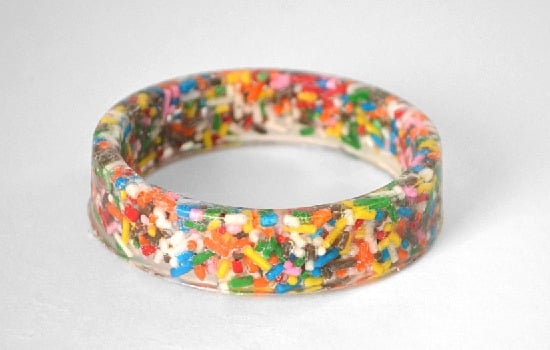 Oh my. What a hot mess is this? The pic above really doesn’t do it justice. In real life it looks at least 65% worse than that. Basically that’s just way, way too many sprinkles and I think the brown ones don’t do a thing to improve the situation. Plus there are bunches of air bubbles. In spite of failure, that was all of those kind of sprinkles I had on hand so it’s time to move on and dig out the next little bottle out of the box. 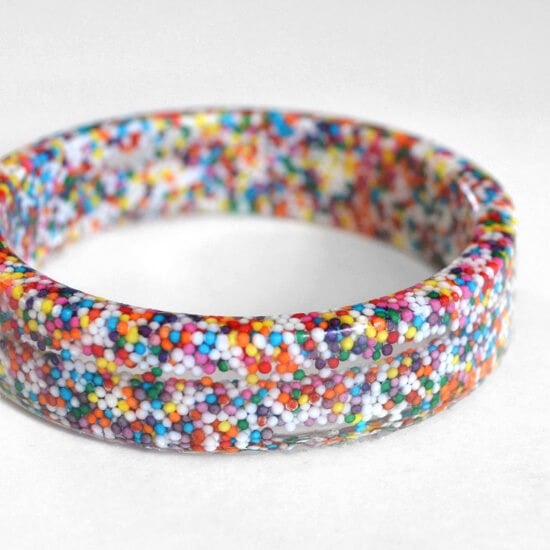 Now this one I tried to layer. I poured just a tiny bit and put the nonpareils. A seriously tiny amount. I figured it would take 10-12 passes to make a bracelet but I was going to do this! When I came back to see how things were going I was so disappointed. I had no idea that there was enough for them to sink! So I mixed up more acrylic with so many of the little nonpariels and it filled half of my two bangle molds. So I left it and came back later. It wasn’t perfect (see the strips of clear every once in a while) but I was happy enough with it so I mixed up another batch and poured it on top.

The end result is actually much, much prettier in real life. Russell doesn’t give a fig about most of my stuff but he came across the room to ask what it was (and it was tucked partially under stuff because Marla, one of my cats, also thought it was worth looking at. Or batting of the desk and to who knows where.)

I learned that you cannot sand these suckers down though, so you need to have your molds sitting someplace very level and you have to be very careful to pour as evenly as possible with as little hanging over the edges. If you try to sand them and get into a piece of a sprinkle, the sprinkle itself just falls apart and then you have a gaping hole.

Unfortunately I can’t tell you how to not have them sink directly to the bottom. But perhaps it is something I will be able to share with a bit more effort.  I’ve already begun round 2 of he resin experiments but, as stated, I’ve already run out of the good stuff. Looks like a trip to Hobby Lobby is in order!

What about you? Have you tried resin? Are you addicted to it? Happy Weekend!