Ages and ages ago I made some jars and I covered them with gems and I put solar lids on them. Since I’ve moved I’ve long since misplaced them and when Rob and I were walking the aisles of the outdoor section at Walmart I noticed that solar lights were only a buck apiece. I tossed a few in our cart just because, well, they were so cheap.

When I got home I was STOKED because the light on these guys were so clear. I quit looking for my old, store-bought solar lids and instead went about making my own. I love this project for a few reasons… we have a TON of mason jars. I’m not quite sure how/why we have so many. Perhaps they are like rabbits and multiply when you are’t looking. On a side note we recently went to a wildlife refuge where Rob and I were reminded of the saying “breed like rabbits” came from because they were EVERYWHERE. 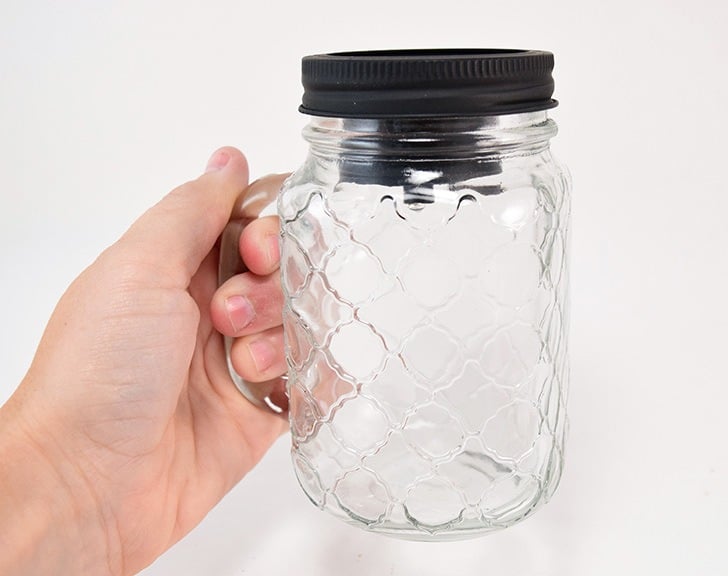 At any rate when we walked past the aisle again I threw a good handful into the buggy and we kept on and, surely, bought a bazillion things we don’t really need. We did need those lights, though. When I got home I started making mason jar lights with gusto and I have to say, it’s so dang easy. And so dang cheap, let’s not forget that it’s cheap. That’s a HUUUUUGE win my book :) 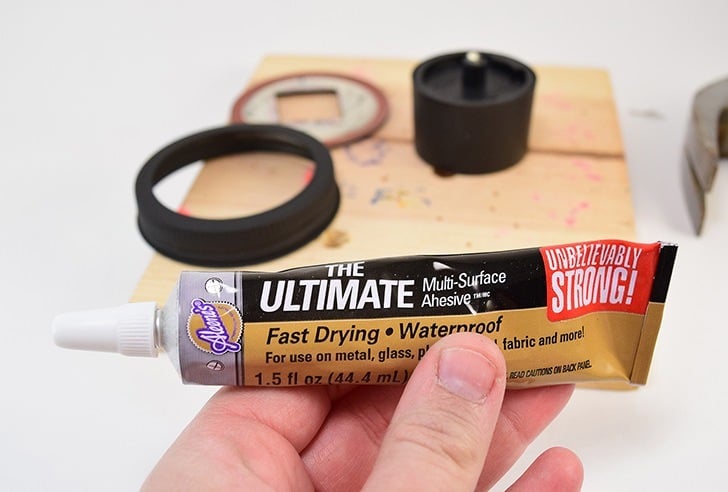 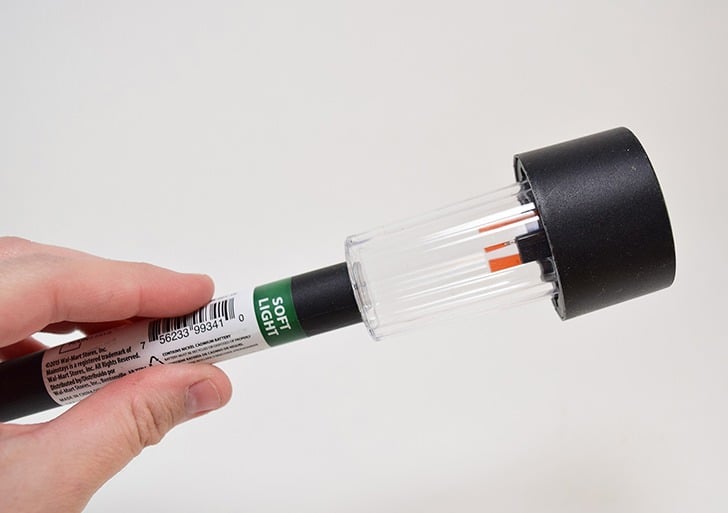 First thing’s first, you’ll need to disassemble your solar lights. I’t super easy, just pop the top off. See that orange bit in there? You have to remove that to make the light operational. Be sure to test every light BEFORE using it. I can personally attest that not every one will work (out of 10 I had 2 not work). 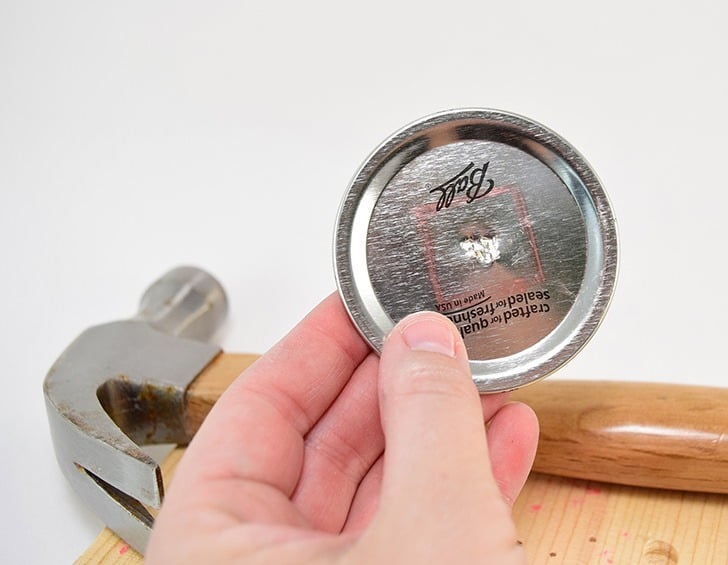 Remove the lid fro your jar and draw a square the same size as the square glass bit on the top of your solar lights. Use a nail to punch a few holes in the middle. 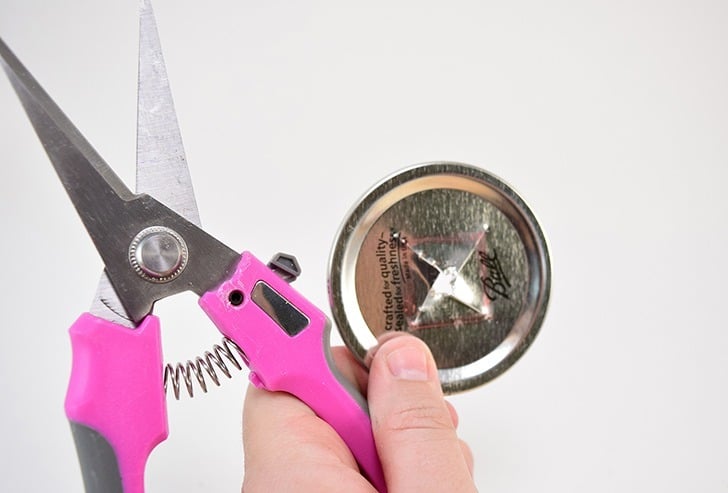 Use your metal snips to insert your snips into the hole you created in the center. Cut to the corners with straight snips. 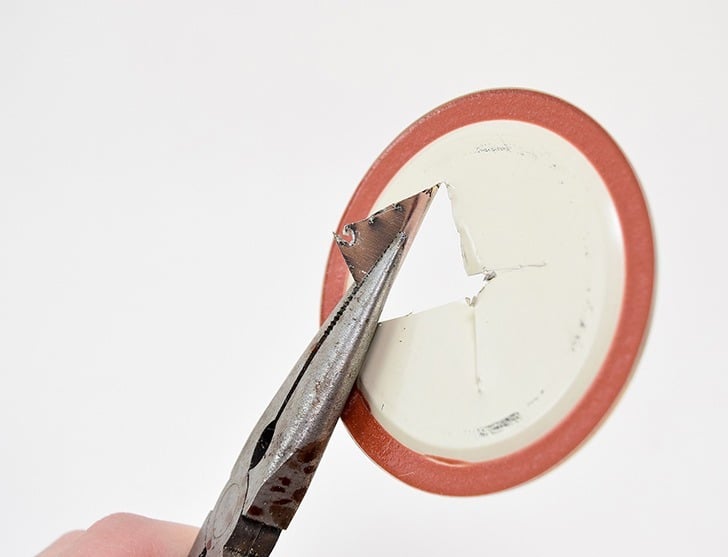 Grab your needlenose pliers and grab the triangle shape made from your cuts and turn the flaps to the wrong side of the seal. If you grab right along the corners of the cuts you can easily make a nice, straight bend but it does take some practice. 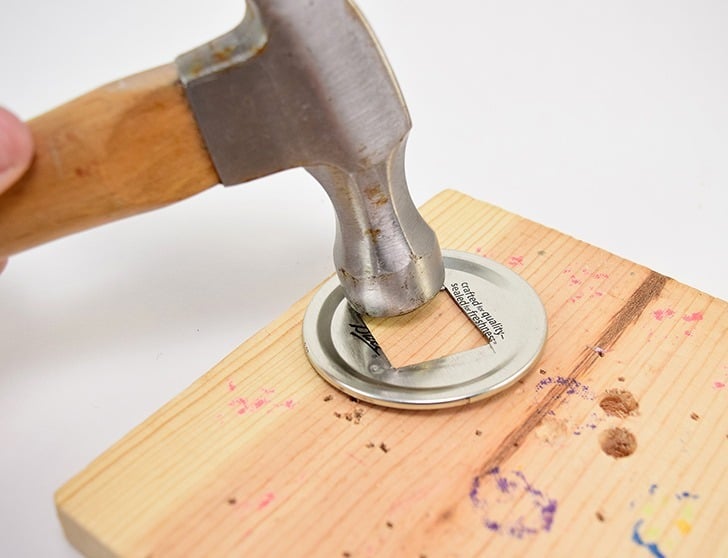 Once all four flaps have been brought under use your hammer to smush those suckers down nice and flush.

If you’re going to paint your lids and rings now is the time to do it. Since my lights were black I painted my rims and seals to match HOWEVER I’d strongly suggest painting the solar lights instead as the paint is coming off of my metal bits when they accidentally get knocked around. And since I’m accident prone they get knocked around quite a bit. 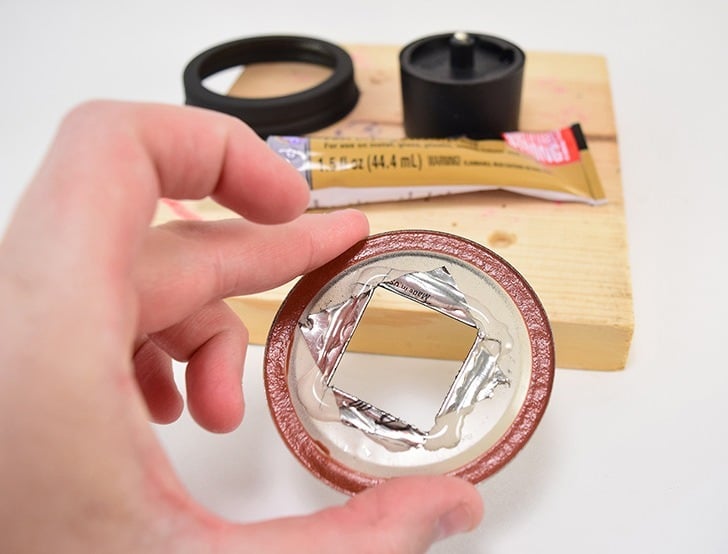 Place a healthy ring of The Ultimate around the inside of the opening in the seal and give a few moments for the glue to firm up to the ultimate tackiness. 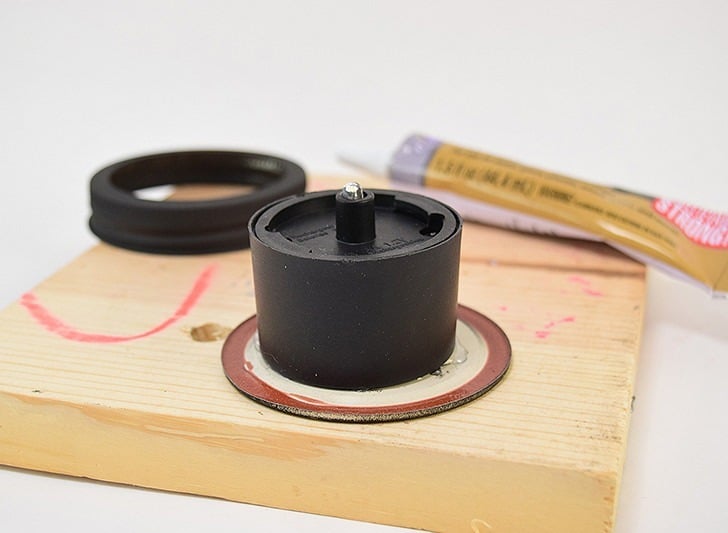 Centering the square solar portion of the light, push the lid onto the top and allow to fully dry. It doesn’t hurt to make sure your light actually works. The second of my 2 that didn’t work changed its mind after I initially checked them out. Harumph. 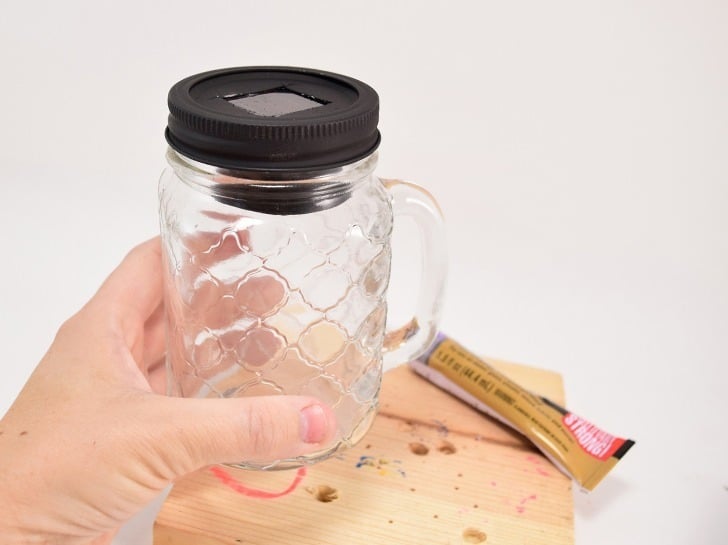 Screw that lid on and you’re all sorts of set.

Now my black lids really, really stand out and I kind of like it. Perhaps if I had sealed the paint with a coat of spray polyurethane the durability would have been a bit better. Use your own judgement when deciding what should match what, here :) 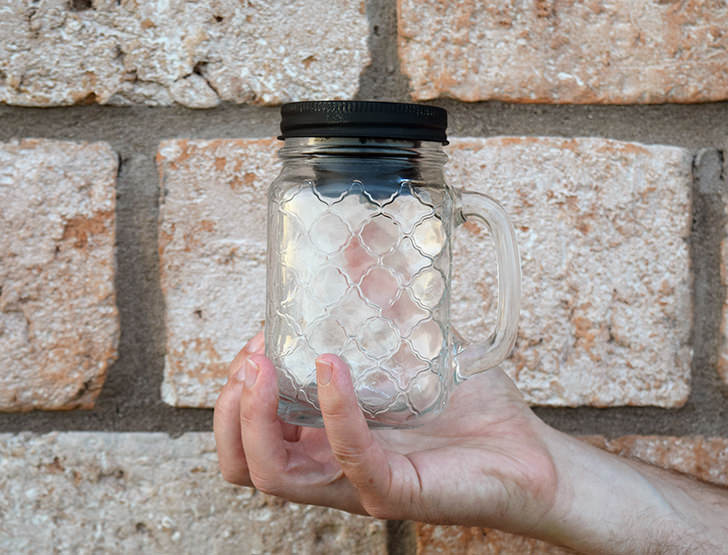 Out in normal light these guys are still pretty attractive. 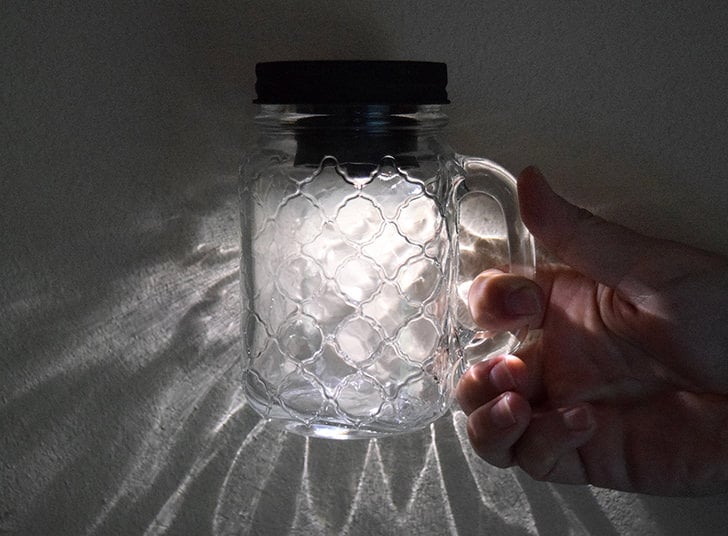 When it’s pretty dark these guys really, really shine. Isn’t that lovely? These are considerably whiter in light and definitely brighter than my old solar lids so I am quite pleased with myself!

In the end these guys are so pretty and, lucky you, I have a pretty purple DIY coming up with these guys over at iLoveToCreate. Be sure to keep your eyes peeled for that! 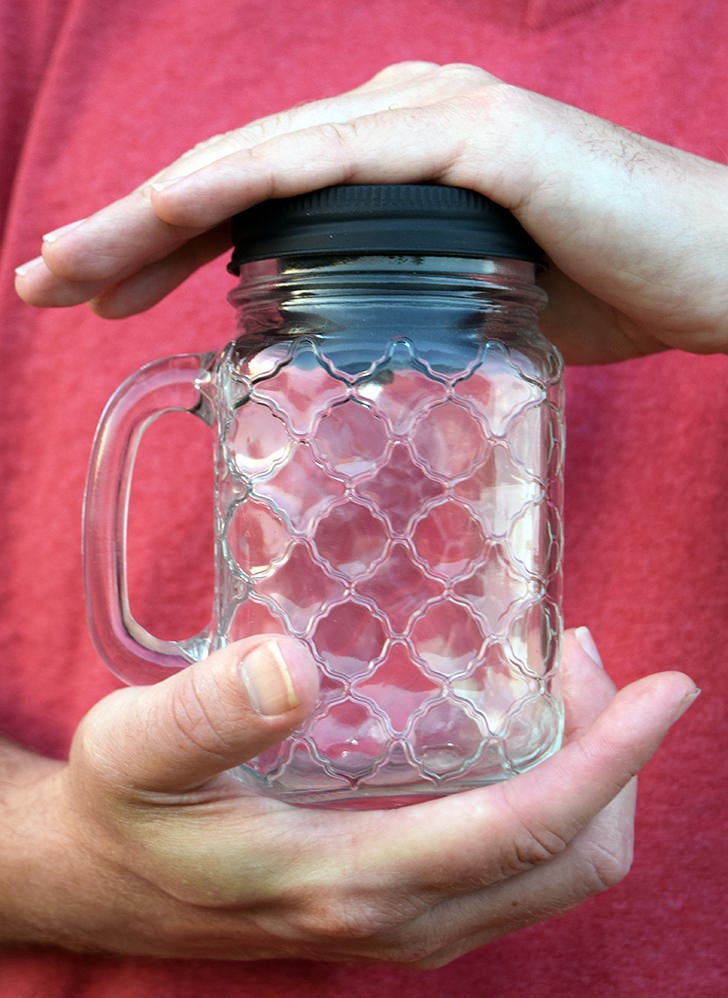