This patriotic Red, White and Boom Fourth of July Tee Shirt is too much fun! Make one for yourself or your favorite fireworks enthusiast! #boomsquad

I was thinking about it today and I realized that the smells of the Fourth of July that I love all have to do with fire. I’m a bit of a firebug when it comes to Independence Day because I LOVE TO POP. Like, booming is my favorite thing in just about the whole world.

Back in Oklahoma, I bought a house in my early twenties and after I moved in, I started to feel kind of duped. You see, my real estate agent was a good friend and the listing agent with the flipper who fixed up my home. Oh, and she was also the wife of my inspector. And none of this seemed to matter until I moved in. It was the hottest month of the year, August, and guess what? Only half of the electricity worked in the house because they had cut the power line, it had rained and gotten wet and everything “single phased” whatever that means. All I know is the first few nights I spent in tears with my dogs and cats all laying in front of 2 fans blowing in the guest room, one of the only rooms with power. Oh, and my fridge, washer and dryer were LL on the side of the house that didn’t work.

The electricity problem was GLARING but it didn’t take long for the poor job of renovations by the flipper to start rearing their ugly heads. Power fixed it turned out that the water well motor was damaged from the half power it was getting and had to be pulled and replaced. Oh, and they had to tear down part of the fence to get into the backyard to bring the truck in to fix it. The hot water heater was so full of sediment, that it would blow fuses within weeks and because the tank was half full of sediment, you didn’t get a very long hot shower. Then the A/C had issues and it turned out somebody had painted something to look new rather than replace it. Oh, and the dishwasher wasn’t actually attached inside of the cabinetry so it would shimmy its way out when you washed dishes. And the dryer vent was totally plugged up and a fire hazard, as was the fireplace. And those are just the problems I can remember right off of the top of my head. My dear word, right? Duped almost seems too mild a word… 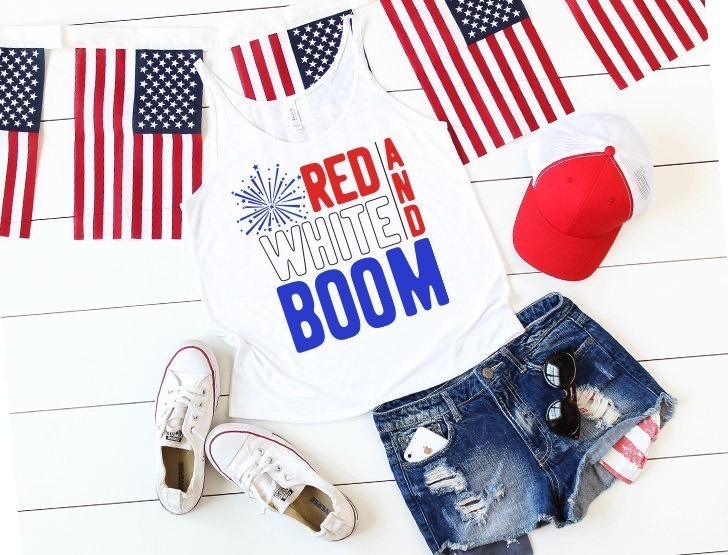 This house was also an hour-long drive to my work and any friends I had, and I knew that but I didn’t realize how much a 2-hour daily commute would stink. And hardly anybody wanted to drive out that far to come to visit me at the house so it was up to me to go into town for lunches and get-togethers and whatnot which meant a significant drop in my social life. At twenty-something, that was the darn pits.

Within months I HATED MY HOUSE. But there I was stuck in it. Ugh. 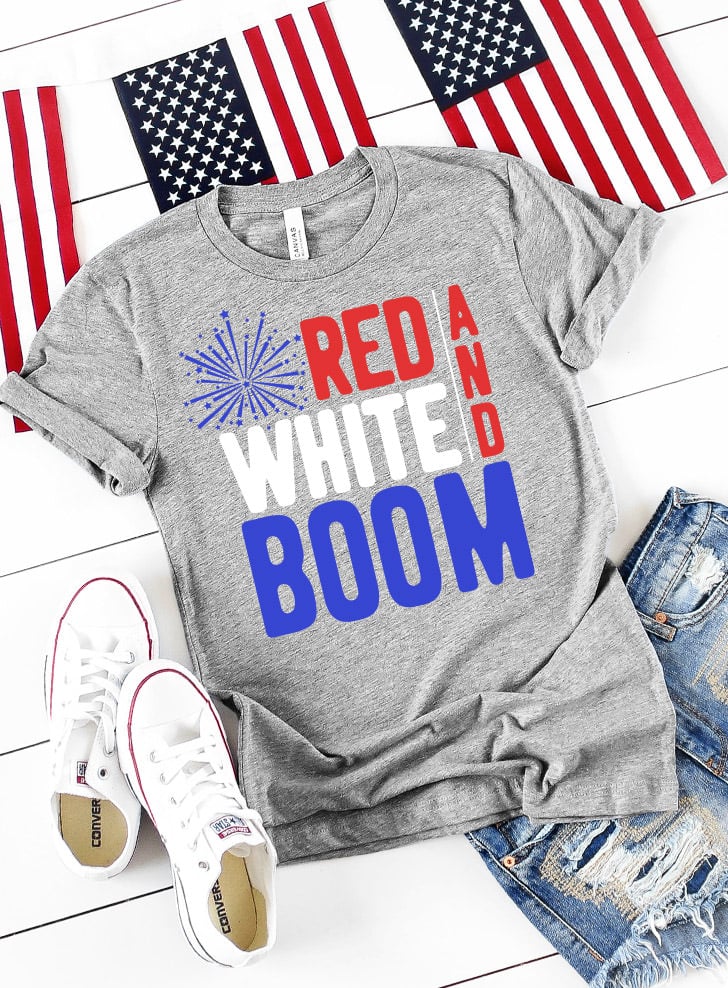 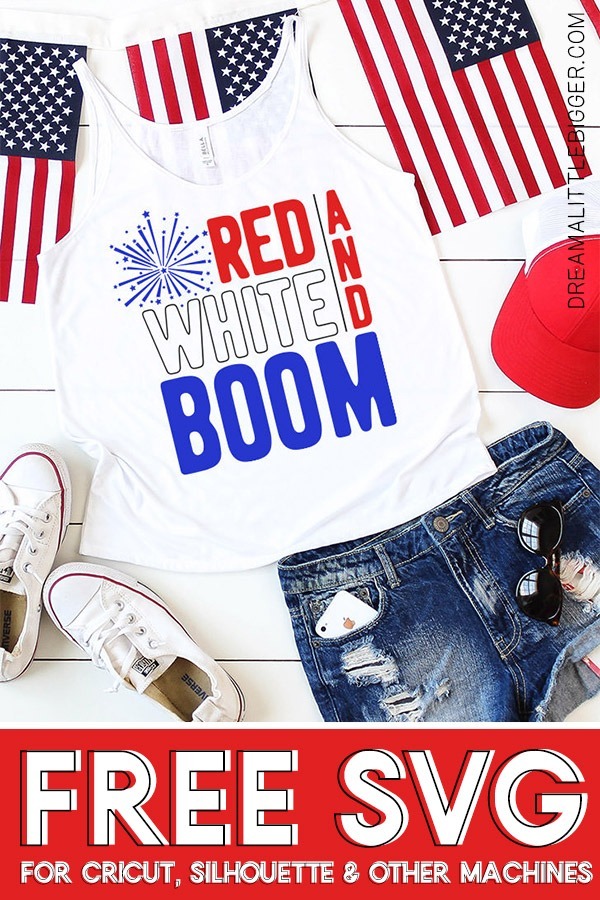 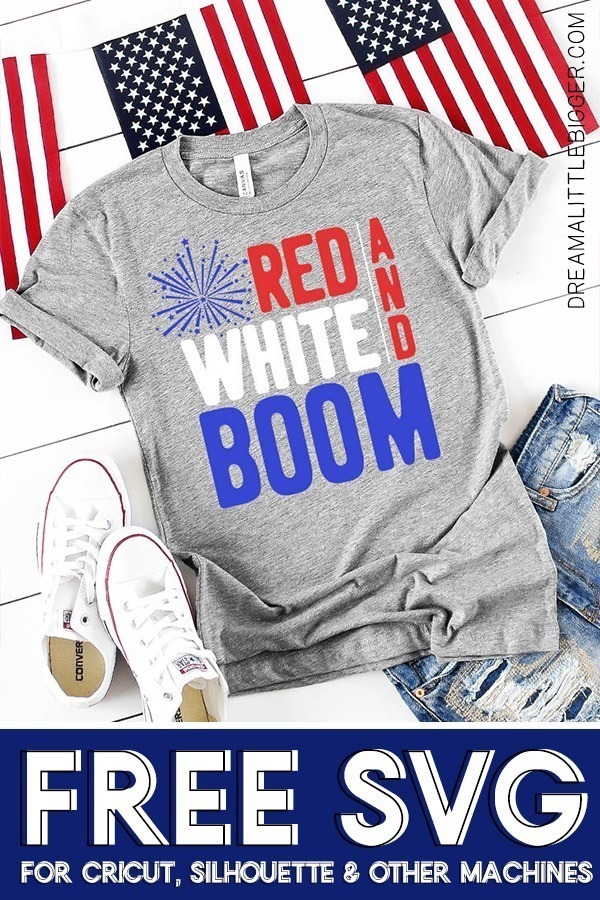 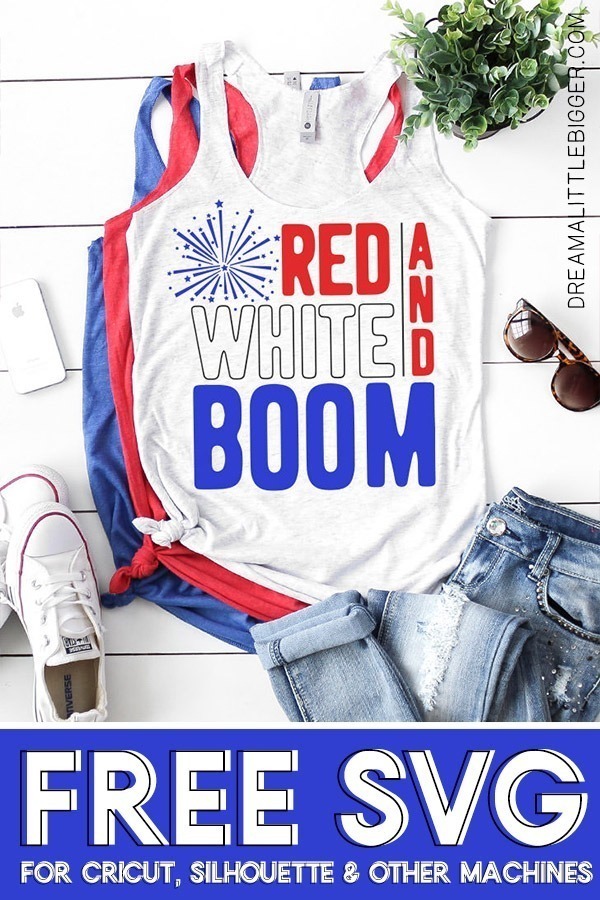 But almost a year later I learned the most amazing thing about my house. Like, the best possible benefit of this house was that it was in an unincorporated area. And that meant there were no laws preventing me and mine from popping fireworks and that first year I went absolutely. nuts. with fireworks.

Suddenly everybody and their dog wanted to come out to my place and so every year I got to smell those odors that most remind me of some of the happiest times I had in that house I didn’t like. Cooking out there would be the smell charcoal burning and shortly after dark sulfur and black powder would be so strong, hanging in the humid air. Gah. The best.

And one of the best things I ever heard anybody say about my fave holiday was a kind of sad, but very kind active duty military gentleman who offered to pop all of the good stuff in our huge pile in the garage. When I told him that I would love for him to be the designated popper turning to the people crowded on blankets and chairs on the lawn11… 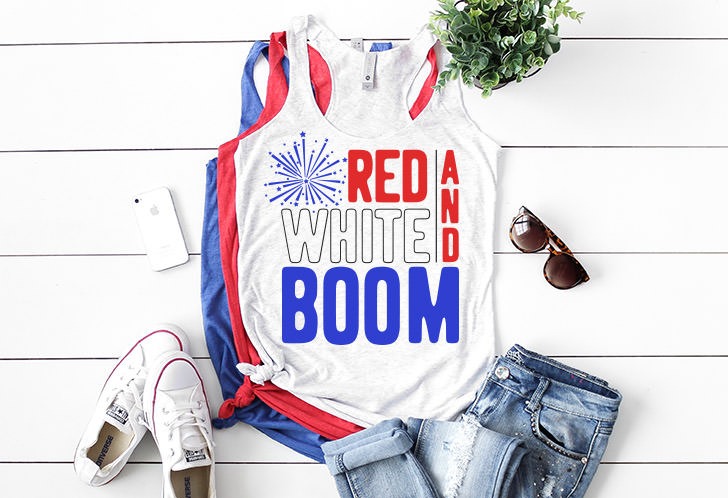 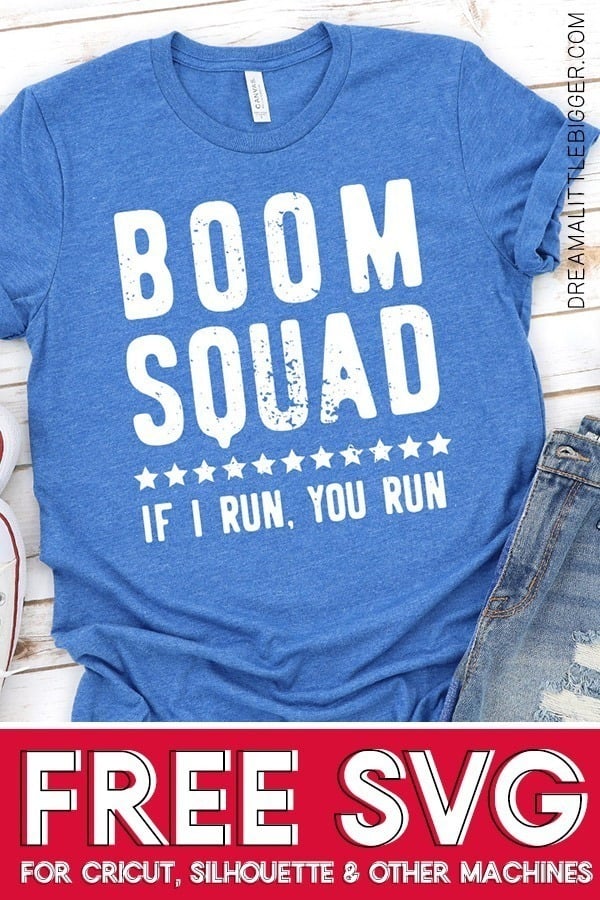 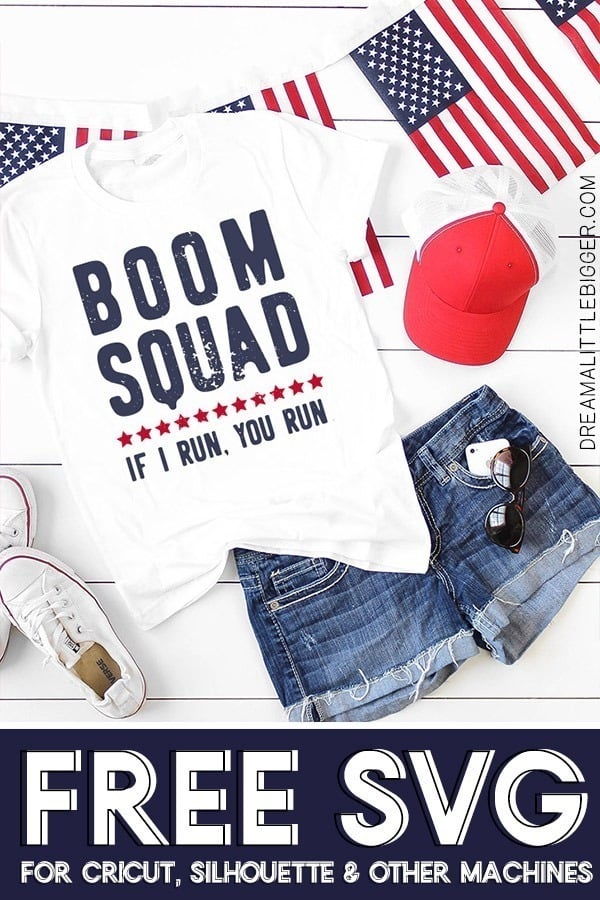 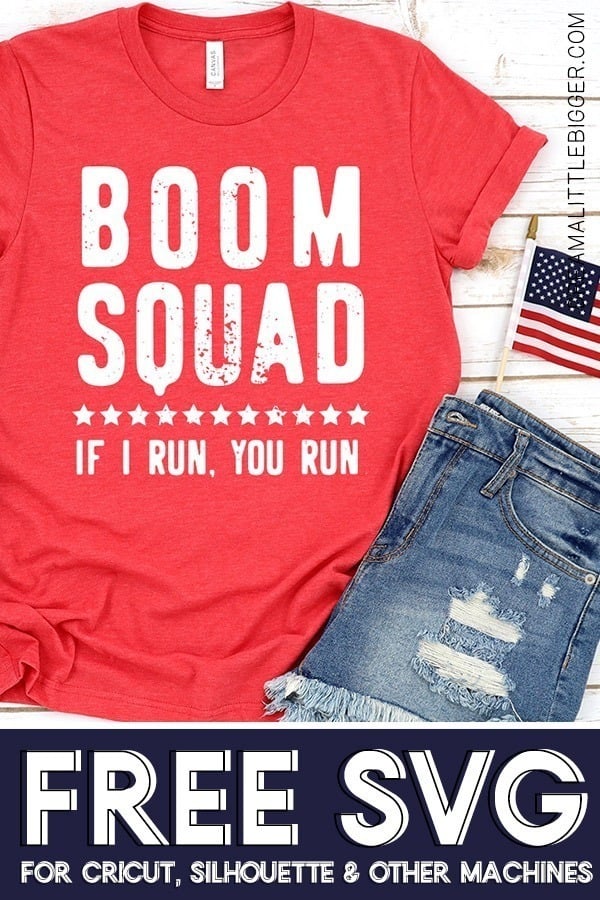 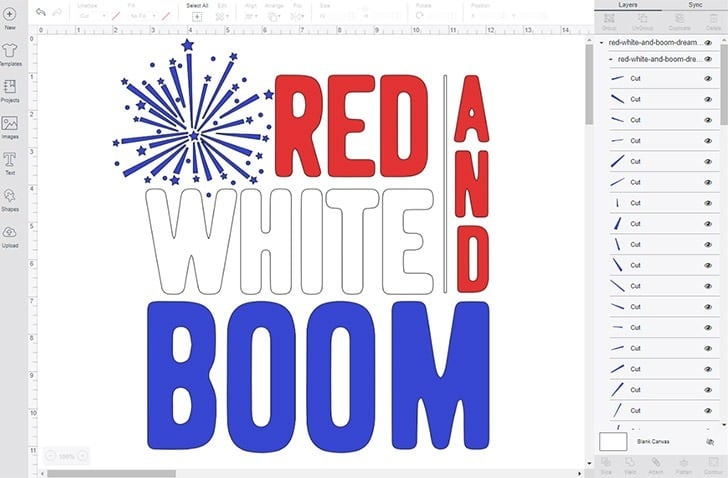 There are 2 different SVG files available for you to download. If cutting vinyl for a white tee shirt or tank (or whatever) snag the Red, White, and Boom Free SVG on WHITE  cut file. In this SVG file, instead of having the WHITE as solid letters, you instead get a black outline to cut so that the WHITE is still WHITE and stands out on a WHITE tee. If you’re going to be cutting vinyl for any color where the white letters will stand out okay, grab the Red, White, and Boom Free SVG on COLOR cut file (it’s the one in the image above).

Upload your SVG file of choice into Cricut Design Space and, unfortunately, get ready to do a little bit of work because I simply cannot figure out how to make a darn SVG cut file that you don’t need to go in and manually group in Cricut Design Space so that it will cut properly. Got that biz in CD? Ready to go? 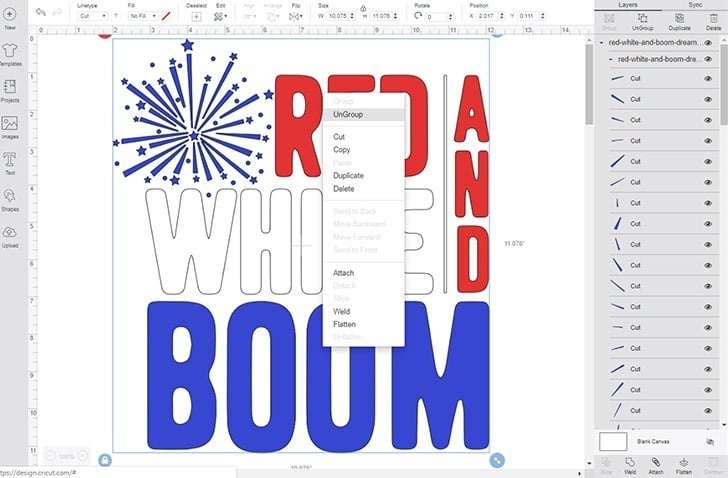 First, select the uploaded image and right click on it. Select “UnGroup” to break everything apart. 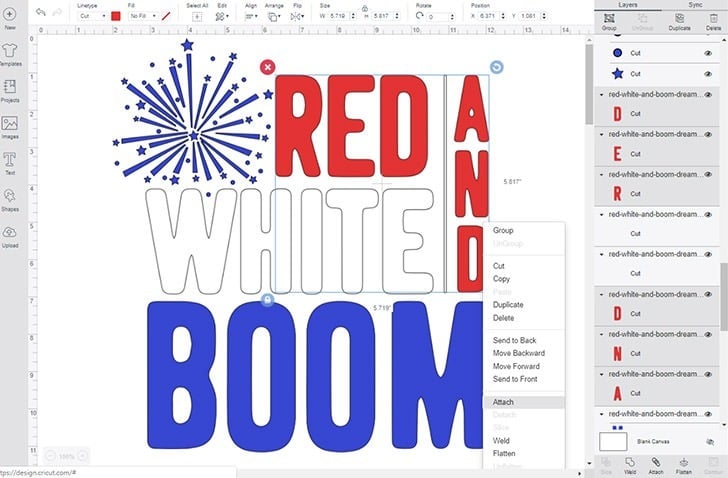 Next, grab all of the same color elements, selecting each of them while hitting the shift key and then right click on them. Select “Attach”. Alternatively, you can also select the elements to cut together click the paperclip that reads “Attach” in the bottom right-hand corner of Design Space. 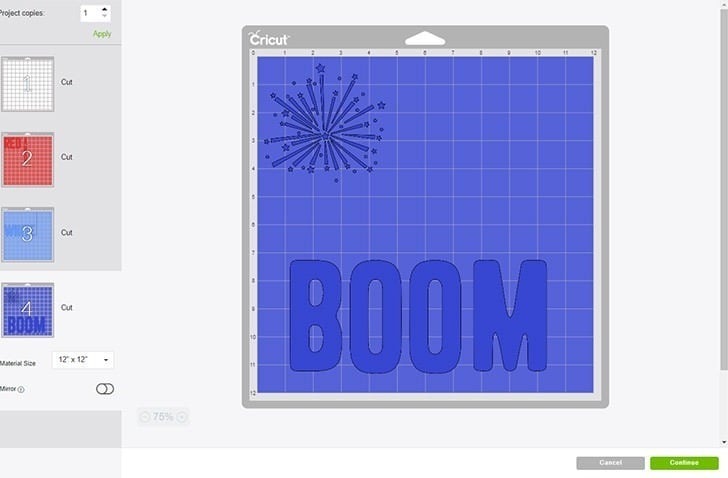 Hit the “Make it” button in the top right and have a little peeksie to make sure that your heat transfer vinyl will cut out exactly as it will need to be placed on your tee, bag, or what have you. Look good? Great. Load your a standard grip cutting mat with the appropriately colored heat transfer vinyl and cut with your Cricut of choice. psst —> I LOVE MY Cricut Maker and I use it all of the time, just in case you’re wondering what cutting machine to get, it’s my FAVE.

Once cut, apply your HTV to your tee, or whatever, with an iron or a heat press.

Oh, here we go with another crafty service announcement, a CSA, if you will —> I LOVE my Cricut EasyPress because you just pop that sucker on top of your HTV, push it down a bit and then, when you’re done let it cool down and toss it in a bag. I used to have a GIGANTIC heat press and I hated it. I literally had to roll it in from the garage, where it stayed because it was too big and ugly to keep anywhere in the house. And then that big sucker heated up the room like an oven. It was the darn pits. And, honestly, I used an iron more often than not because, dang, it was just so much trouble. But the EasyPress is like the perfect thing, right in between an iron and a big ass heat press. If you HTV a lot, I think it is well worth dipping into your craft budget for… 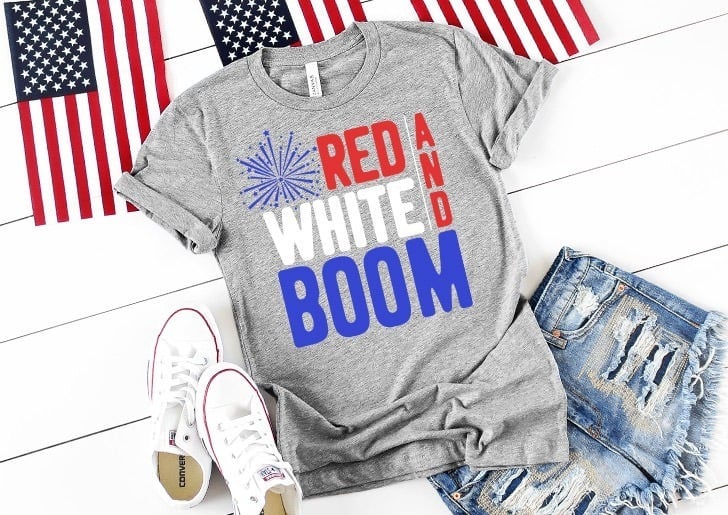 Now, how much fun is this Red, White, and Boom (for color tees) on a gray shirt.? It’s like a ton of fun, right? This is exactly what I had in mind when I worked up this cut file because I absolutely love a gray tee shirt. They’re, like, totally my fave and I have a bazillion of them. I love it because it’s Patriotic and all “I LOVE FIREWORKS” but it’s still a gray tee I love. 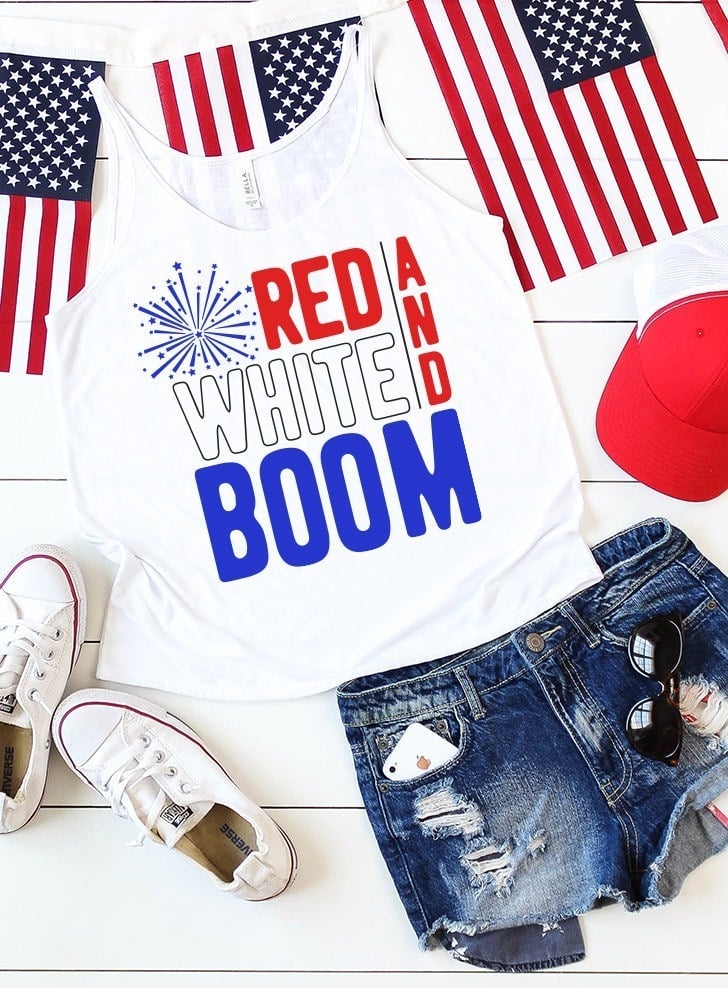 But, dude, that white tank top is pretty darn Fourth of July adorbs, too, right? I have a feeling, that no matter which file you choose to use, you and yours are going to have the coolest Fourth of July tee shirts around! 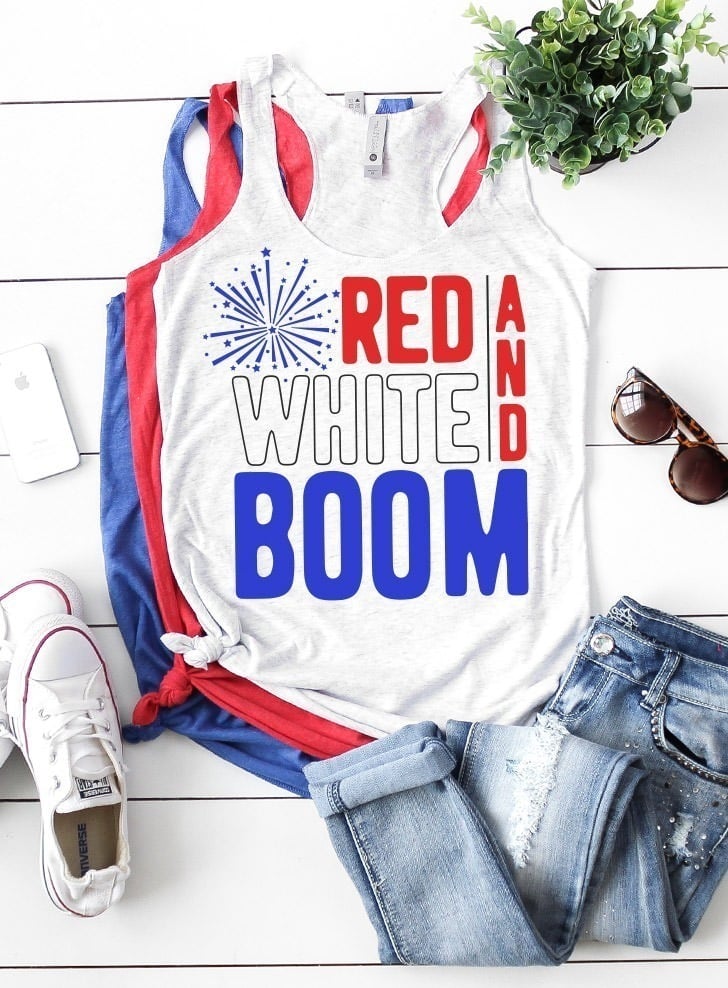