A while back ago I really. ticked. some. body. off. (I know somebody is one word but for emphasis, you know…) Now you might be wondering did I do? Did I make a political comment somebody didn’t agree with? Nope ’cause this ain’t the place for that. We’re all crafts, colors and fun up in here. Was it because I accidentally wrote like I speak and dropped an F bomb into a post? Nope. But I have dropped a less impressive curse and got called out for it and quickly replaced it :)

The thing I did that got me an email in ALL CAPS, meaning this chick was SCREAMING AT ME, was I improperly used the term rainbow to describe my project. You see, as any child could tell you, a rainbow is comprised of red, orange, yellow, green, blue (indigo), violet. And just in case I still didn’t get it she conveniently included a link about Roy G. Biv, a mnemonic device taught to children so that they could remember the colors of the rainbow.

Now today I am terming my project “rainbow” but it doesn’t have violet, simply because I ran out of clean bowls and I thought I might rather have this lady chew my rear again than have to go into that kitchen and wash something. :) Besides I ain’t got no time for that all caps email business these days. Junk it and move on :) 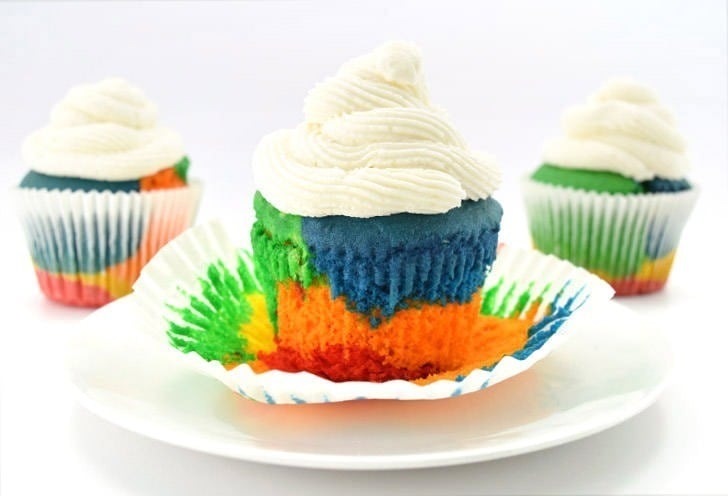 Since Saint Patrick’s Day is right at a week away I thought I’d get all up in the spirit with some jumbo rainbow cupcakes. Jumbo? you might ask… You know those muffin pans that are typically used for 6, you know, large muffins? Why make BIGGER cupcakes? I’ve got a whole list of reasons:

Ready to get to baking? For this project you will need: 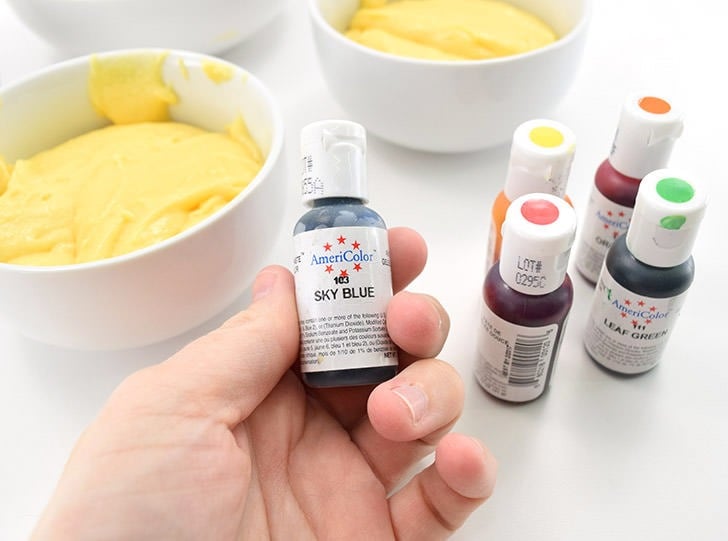 The secret to getting bright, rainbow colors is the type of food coloring you use. I’ve used the 4 color sets that I use for a lot of things but my colors always came out flat. AND since I have to go gluten free boxed cake mix I get yellow because that’s what I have easy access to here. It’s especially important in that case to have good, strong food coloring that can mask that yellow color.

They are kind of pricey but I got a student set of these Americolor Gels 2 years ago and I’m still using them. They might very well be expired by now, I truly have no clue, but they still work like gangbusters because you don’t have to use a ton of it. Have you ever made a cake that was red, or green or whatever inside and had to use tons and tons of food coloring and then you could totally TASTE that it was off because of all of it? You don’t get that with these because they are super concentrated. I’m a huge fan. 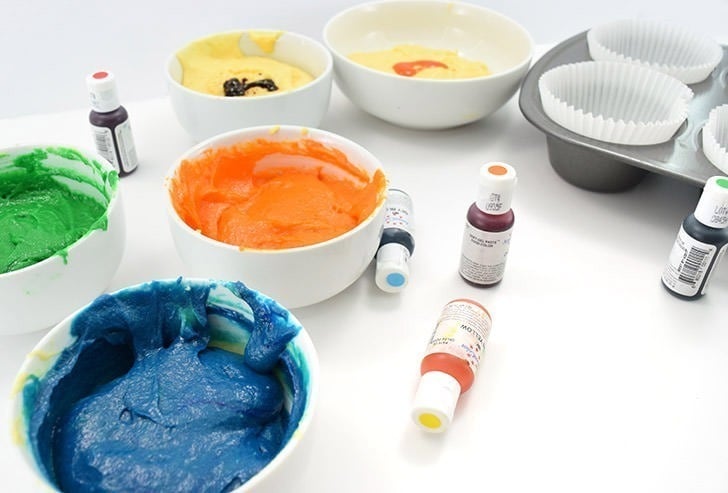 Divide your batter into 6 bowls, or however many colors you want to mix up, add a squeezin’ of color and get after it. Really, really mix it up so that the color is even.

Just FYI a typical boxed cake mix divides super easily into 5 – 1/2 cups so you can easily get a really even amount of every color batter if you go with 5 colors. 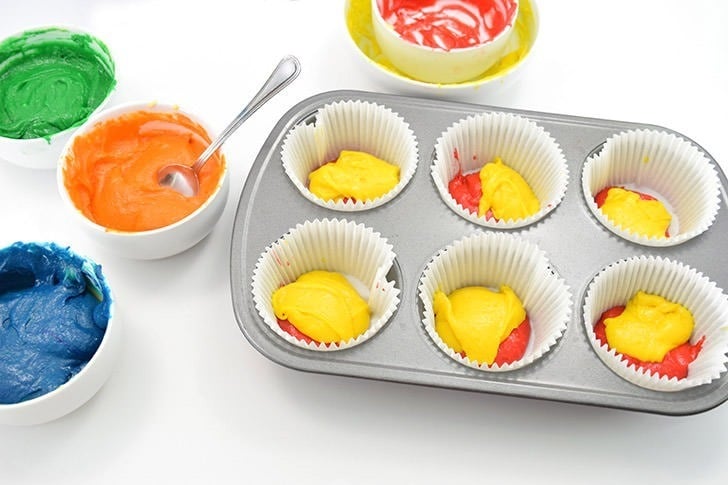 Start tossing your batter in however you please. You can smack the cupcake pan on the counter until your current color evens before adding the next layer but sometimes that doesn’t wind up totally flat, or you could neatly pipe it in or you can just blob it in. 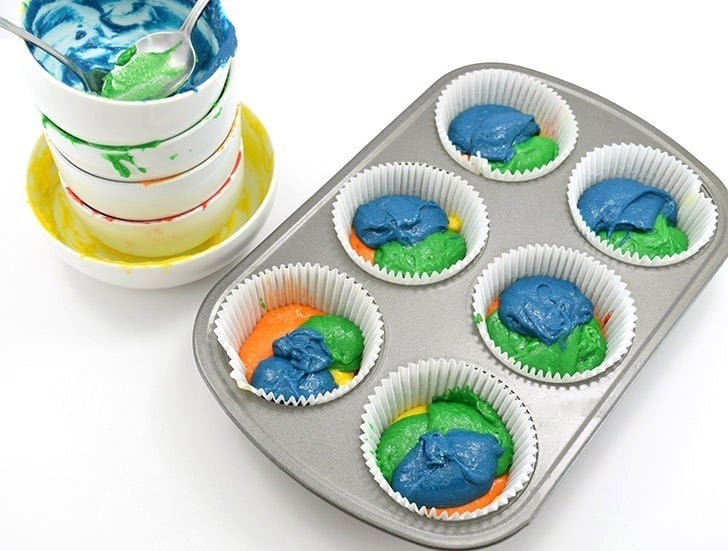 I’m a fan of the far less effort, and therefore far quicker, blob method. Toss your rainbow cupcakes into the oven according to package directions and you’ve got a few bowls to wash. 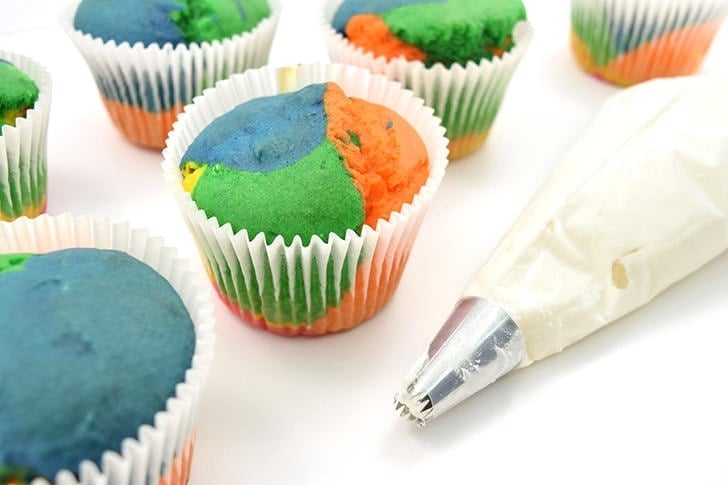 Once a knife or pick comes out cleanly and the cupcakes are completely baked leave out to cool completely. Once cool frost with your favorite icing. 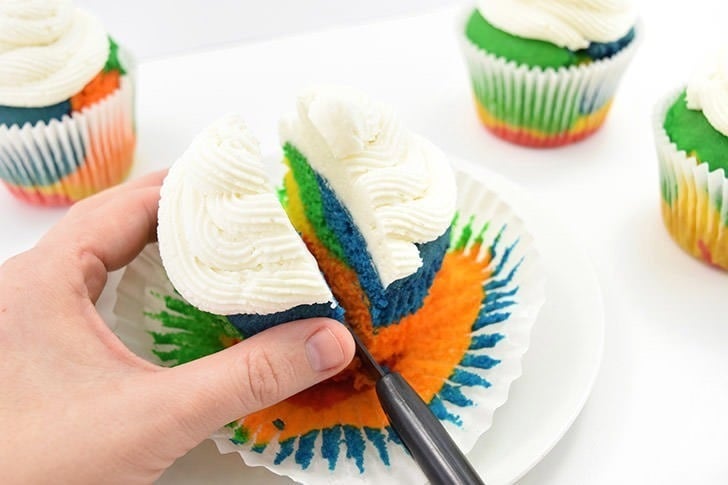 Which brings me to frosting… Do you need a frosting recipe that dries hard? Do you miss that good old frosting that graced probably almost all of your store bought childhood birthday cakes? Well I have a recipe that tastes and acts exactly like that good ol’ grocery store bakery icing. In all honesty, it’s not Rob’s favorite as he feels it is a bit gritty and way too sweet. But since I am the baker and frosting maker I get things my way!

But today I think that karma paid me back in a way that had me sending curse laden texts to Rob because when things hit the fan you want somebody to be like “Dude! That sucks!” I have no clue, literally no clue, why but for some reason when I brought my mixer head up on my hot pink Kitchenaid mixer I then turned it on. Um, what?!? Any guesses what happened next?

Frosting whirred out of that thing like split pea soup out of someone possessed and hit me in the freaking eye! The freaking eye! And while I was getting that business worked out rather than turning the darn mixer off it went everywhere. And guess what, folks, I have an open living area so not only the kitchen was jacked but the living room, too! :) I guess that is my comeuppance for making my fave frosting two batches of cupcakes in a row. You know what they say about karma! :) 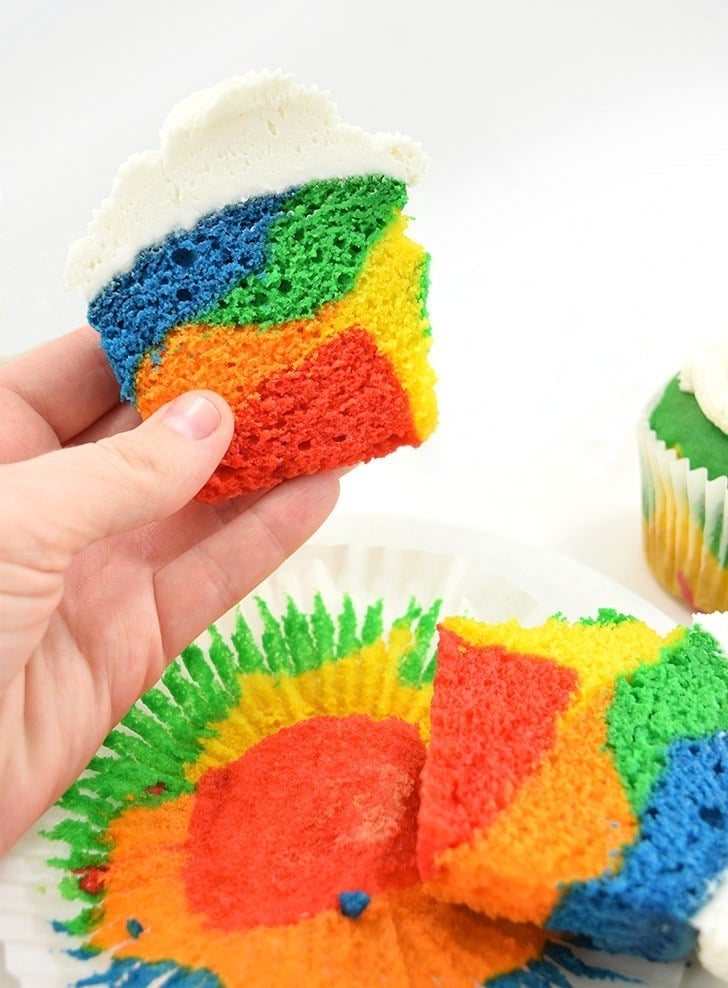 Incredibly sugary this frosting tastes just like it came from the grocery store baker, for real! This frosting also dries good and solid making it a great option when you’ve got to transport a bunch of cupcakes and don’t want frosting all over the place. 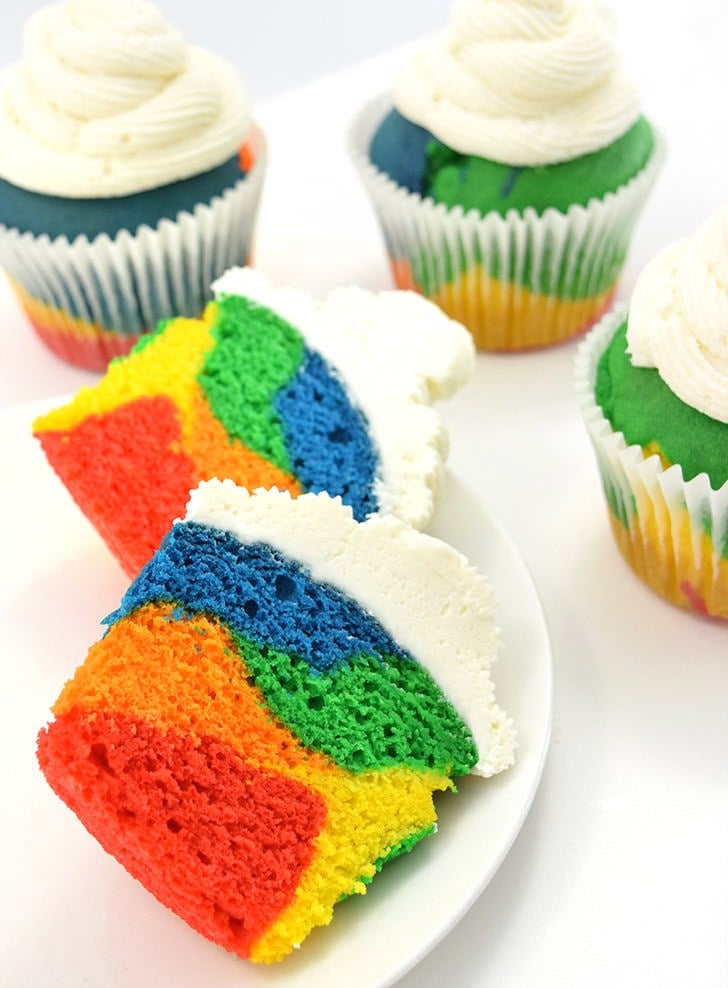