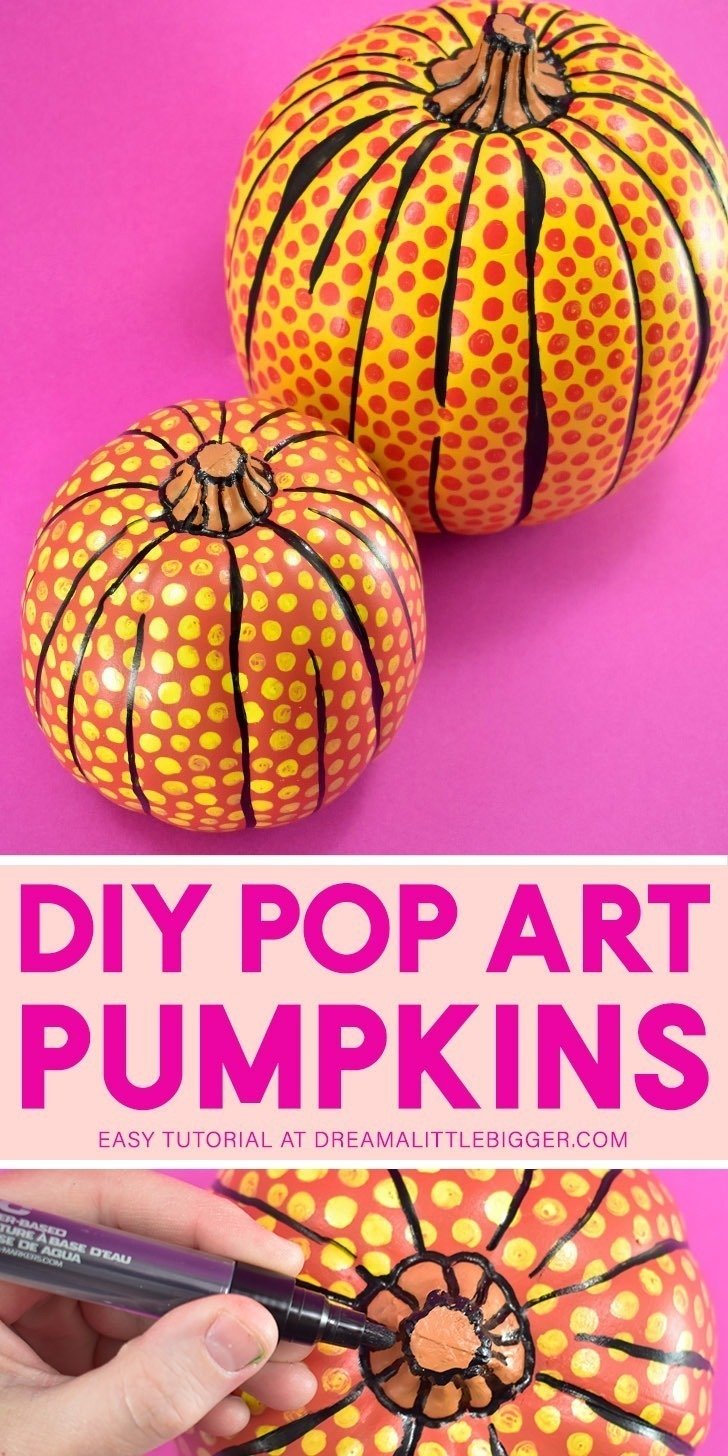 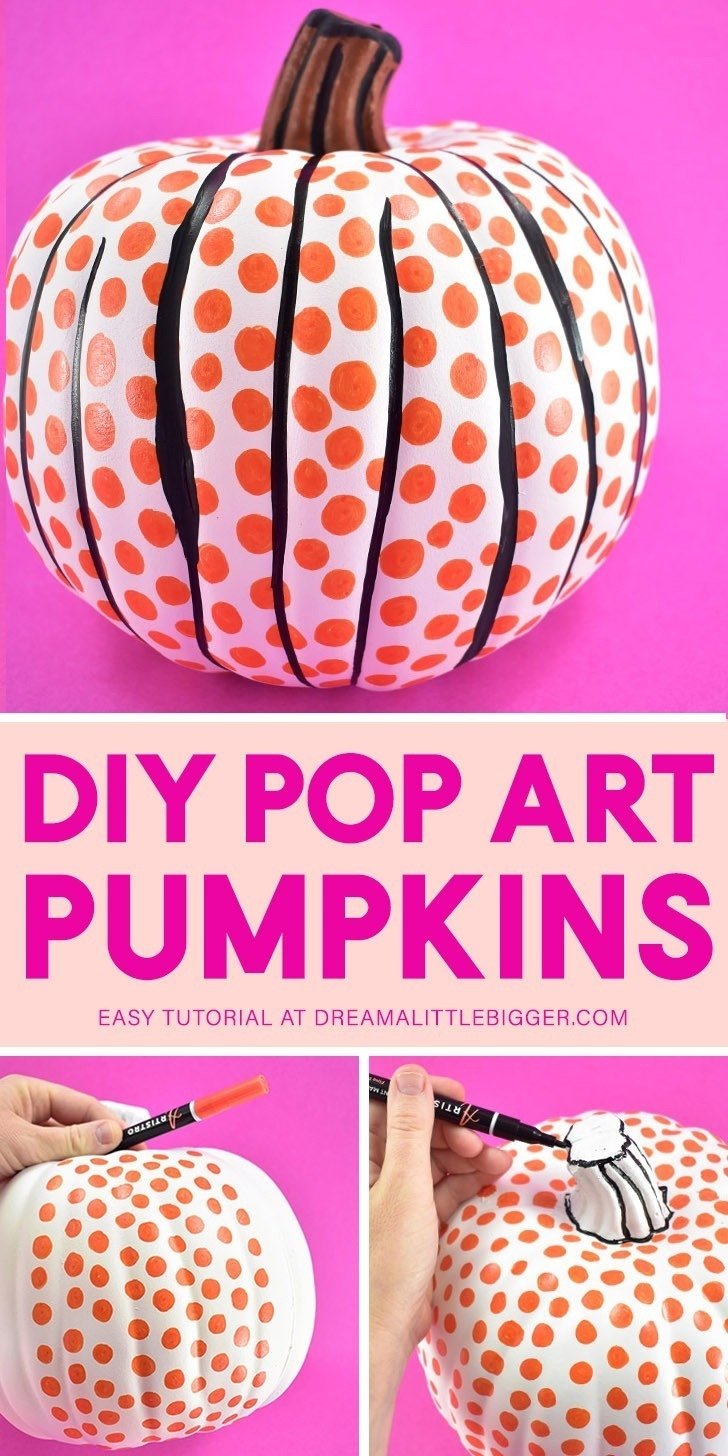 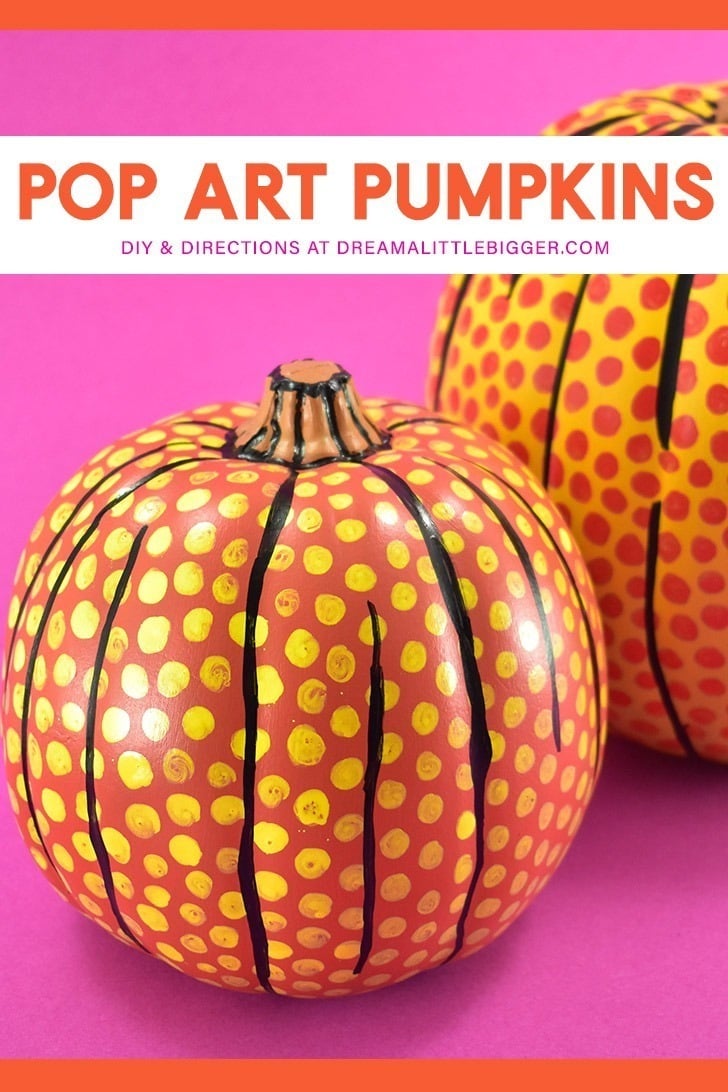 Love pop art? These DIY pop art pumpkins inspired by the art of Roy Lichtenstein are just for you. Learn how to make your own… 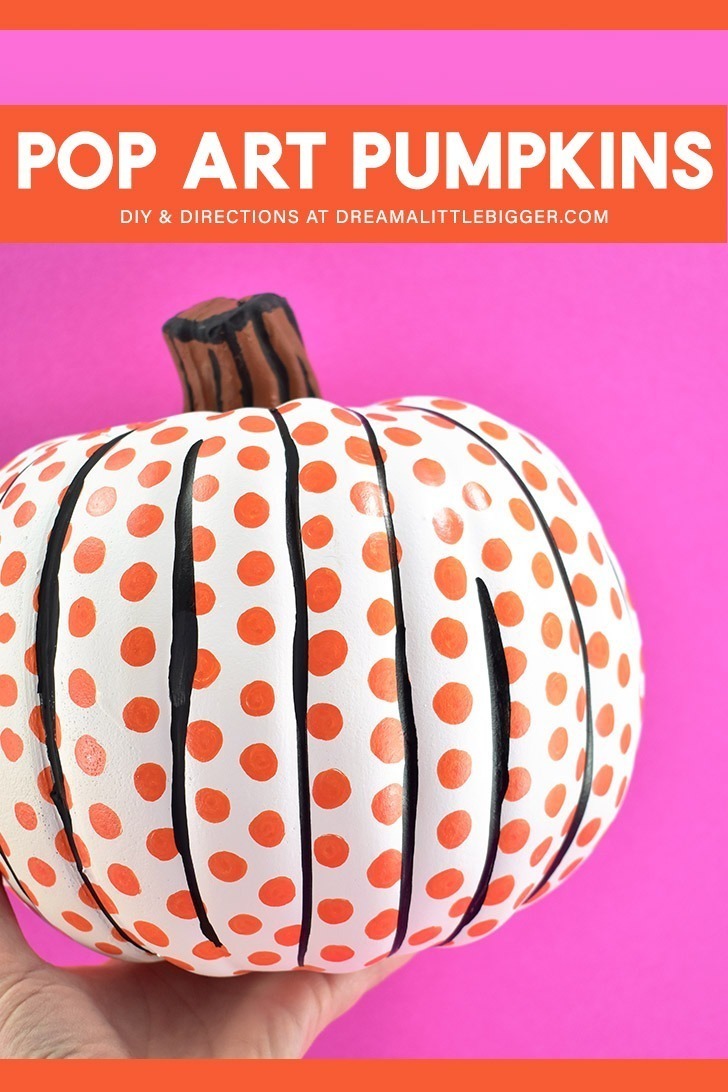 I’m pretty darn excited about today’s craft because I love bold pop art and just about anything DIY inspired by it. Though it’s hardly one of my more popular posts, I even made my own pop art using a photo of Dolly Parton and a cat. Today I’m showing you how to make DIY pop art pumpkins inspired by the artwork of Roy Lichtenstein. 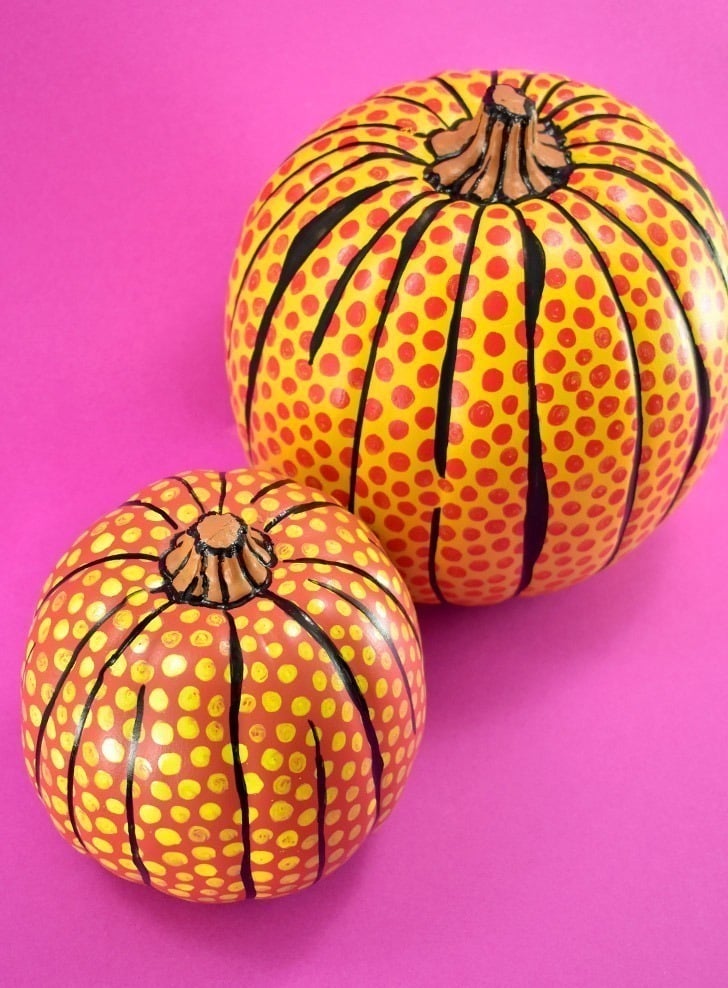 Who was Roy Lichtenstein?

Though you may not have heard of him, you’ve certainly seen his art or something inspired by it. Roy Lichtenstein was an American artist famous for his pop art that looked like comic book panels that featured prominent dots or, Ben-Day Dots, of pattern that were very strong in contrast. If you’ve ever been on Pinterest, you’ve surely seen pop art makeup tutorials inspired by his art with, most often, crying women. Benjamin Day. Equal parts art and parody, he was considered a leader in the new art movement of the 1960s that also included a name you’re sure to recognize, Andy Warhol. If you’d like to learn about Lichtenstein, there is a great biography on MOMA. 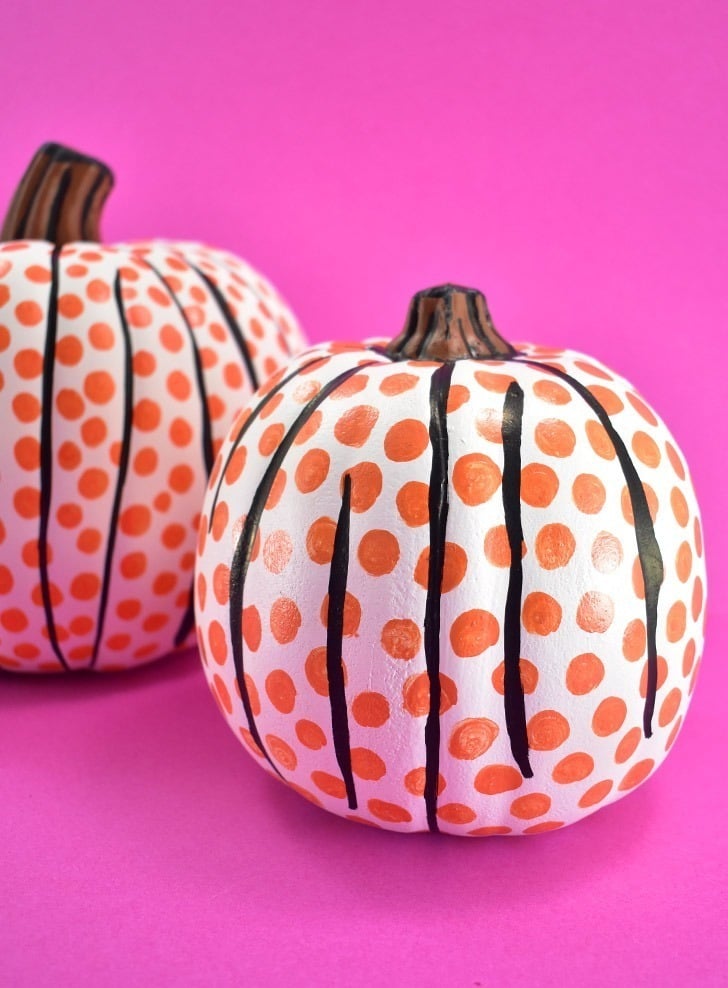 What supplies do you need for DIY Pop Art Pumpkins?

I used a lot of different markers creating this project. Unfortunately, I tried to skimp and save money and wound up just buying more and more markers until I finally bit the bullet and bought the markers I should have from the get-go. Try to cheap out and this is what happens… Darn this frugality that leads to unnecessary excess spending! 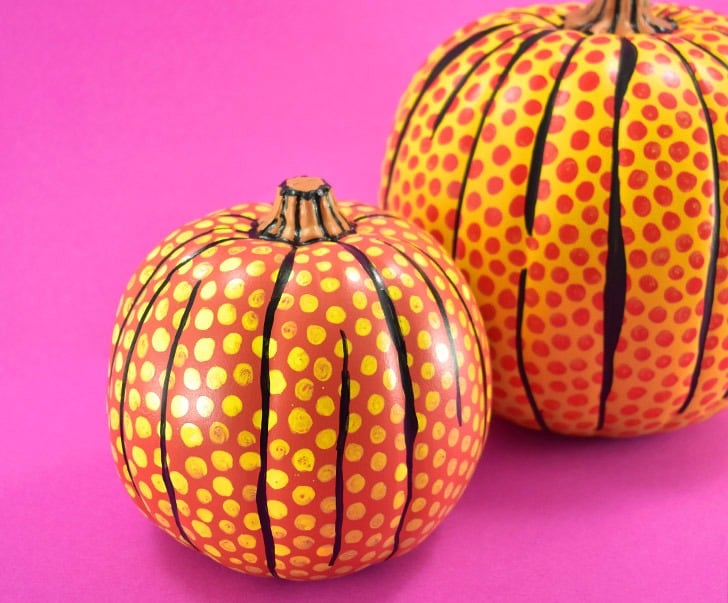 So. Let’s start with the bad… Hobby Lobby paint markers are a hard pass. I had to use 2 HL brand paint pens to make dots on one of these smaller 6.5″. TWO. Next, I used a bargain brand I found a whole set of on Amazon and they were okay. I had to shake and push down the nib on those pens a lot to get anything done, but at least it took only a single pen and they aren’t used up just yet. If you’re on a budget, these paint pens are a pretty good option.

My favorite paint pen to use was a Montana 3mm Acrylic Paint Marker but these markers can be pricy. Click through my link to check it out, but then run to Michael’s to grab one with a 40% off coupon to save some serious cash if you want to go this route. My next favorite paint pens from the new Uni-posca paint pen set I got from Amazon. They cover well and require little shaking and nib pushing but the tips are small and take a long time to draw larger dots with. You might have paint pens already on hand, but should you need some advise, that’s my 2 cents on paint pens :)

When I first started popping some art on pumpkins it was my intention to only create the ones on the left. But things get crazy, as they sometimes do, and I wound up making a TON of pop art pumpkins. I’m pretty happy that I decided to go for it because the two on the right are pretty cool in their own way, too.

I keep waffling between which I like the best, but I think it is the ones on the left. Simply put it’s much easier to tell that these are Lichtenstein inspired from a distance with the very distinguishable orange dots on top of a white background. But up close I tend to prefer the ones on the right because, well, they are just so darn colorful!

No matter which aesthetic you decide to go with the basics are pretty much the same. First, you’ll need to decide what base color you want to start with. Both on the left are primed with white spray primer. The more colorful version is Martha Stewart Satin Craft Paint in Flame, approximately 2 coats on an orange pumpkin. On the right is Martha Stewart Satin in Pollen but it’s a whopping 5 coats on an orange pumpkin. I think it would have been significantly smarter to start with a white pumpkin. Bases loaded, ready to pop? 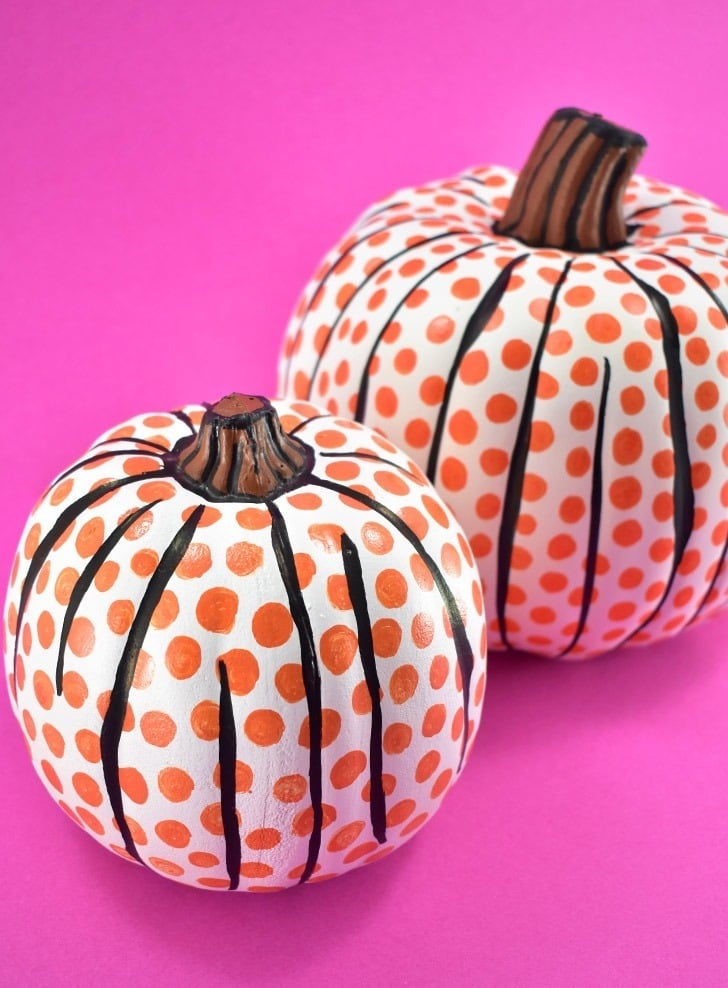 Firstly decide what color you want the base of your pumpkins to be using my suggestions or ideas of your own. Spray them or brush them and allow them to dry completely. 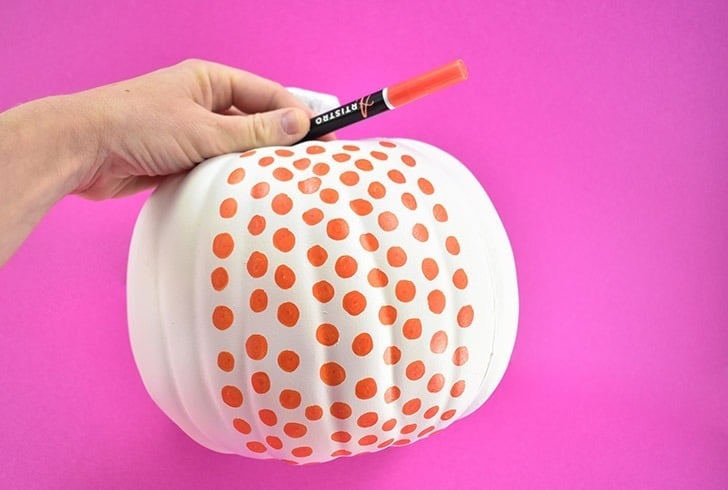 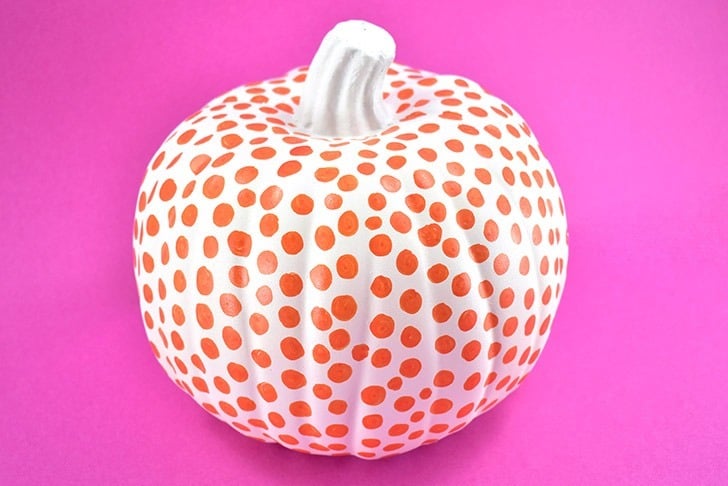 Don’t stress out if they aren’t perfect. You won’t really notice unless it’s just awful. Simply cover the area as well as you can. 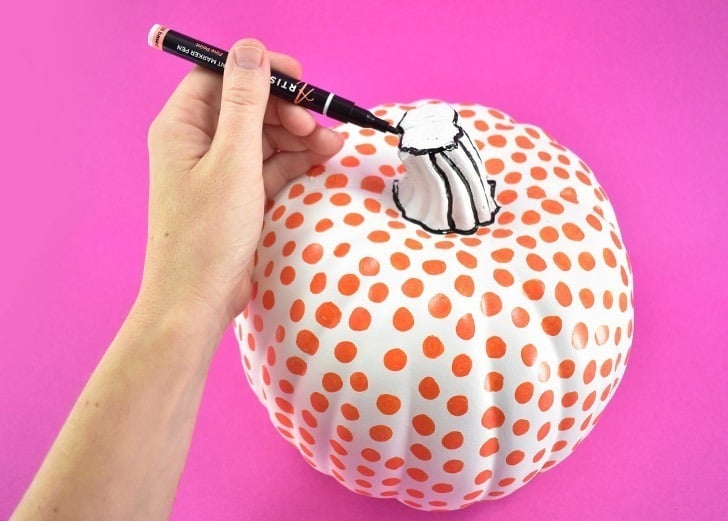 Trace around the stem of the pumpkin with black including the top, where it meets the pumpkin and along the vertical ridges. 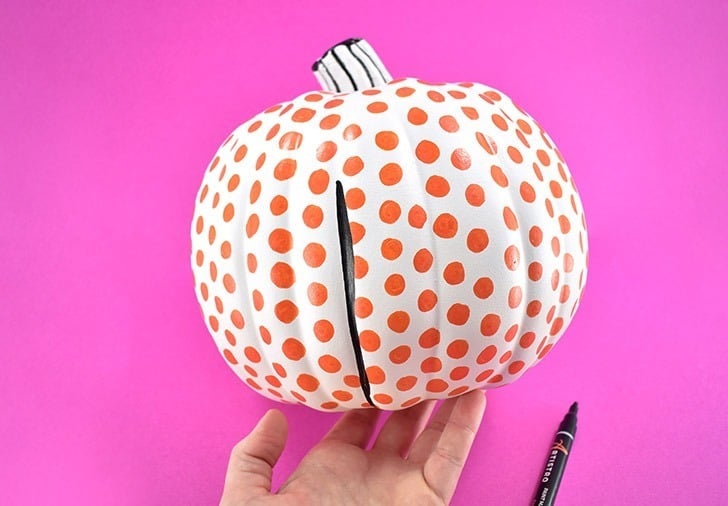 Draw lines of varying thickness and shape along the lines in the pumpkin that divide the sections. Feel free to add more lines than actual indentations on the pumpkin OR you can choose to not trace a few. 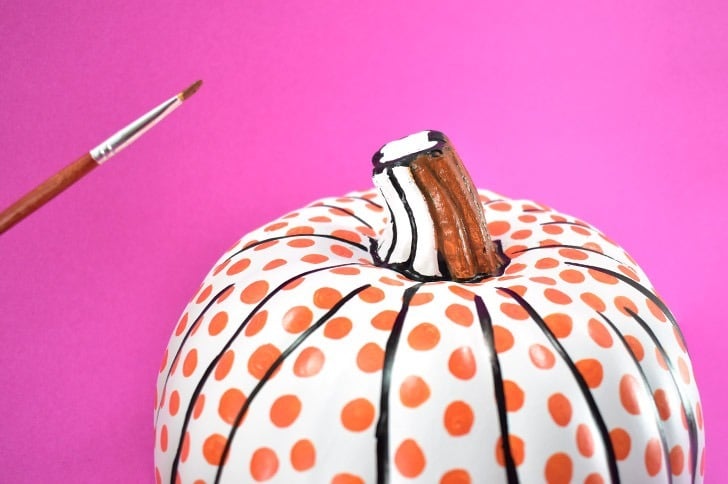 Paint the stem a light to medium brown shade taking care not to completely cover your black lines. I used Martha Stewart Chestnut Brown on the white pumpkins and MS Orangutan Brown (from Michael’s) on the others. Apply paint until the area is opaque. For me, this was 2 coats using both colors. 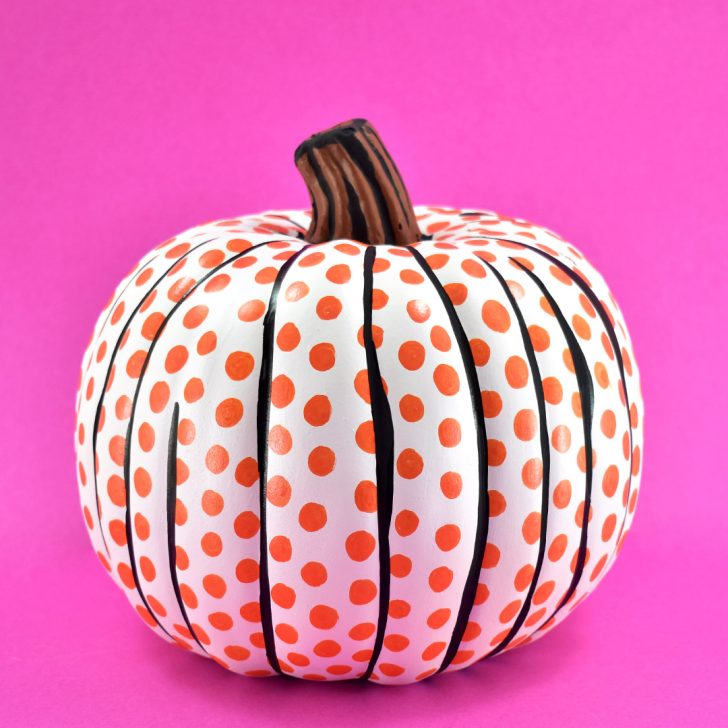 Go over any black lines that need to be redefined, including on the stem. Once the paint is fully dry, seal with your choice of spray or brush-on poly to protect the design. 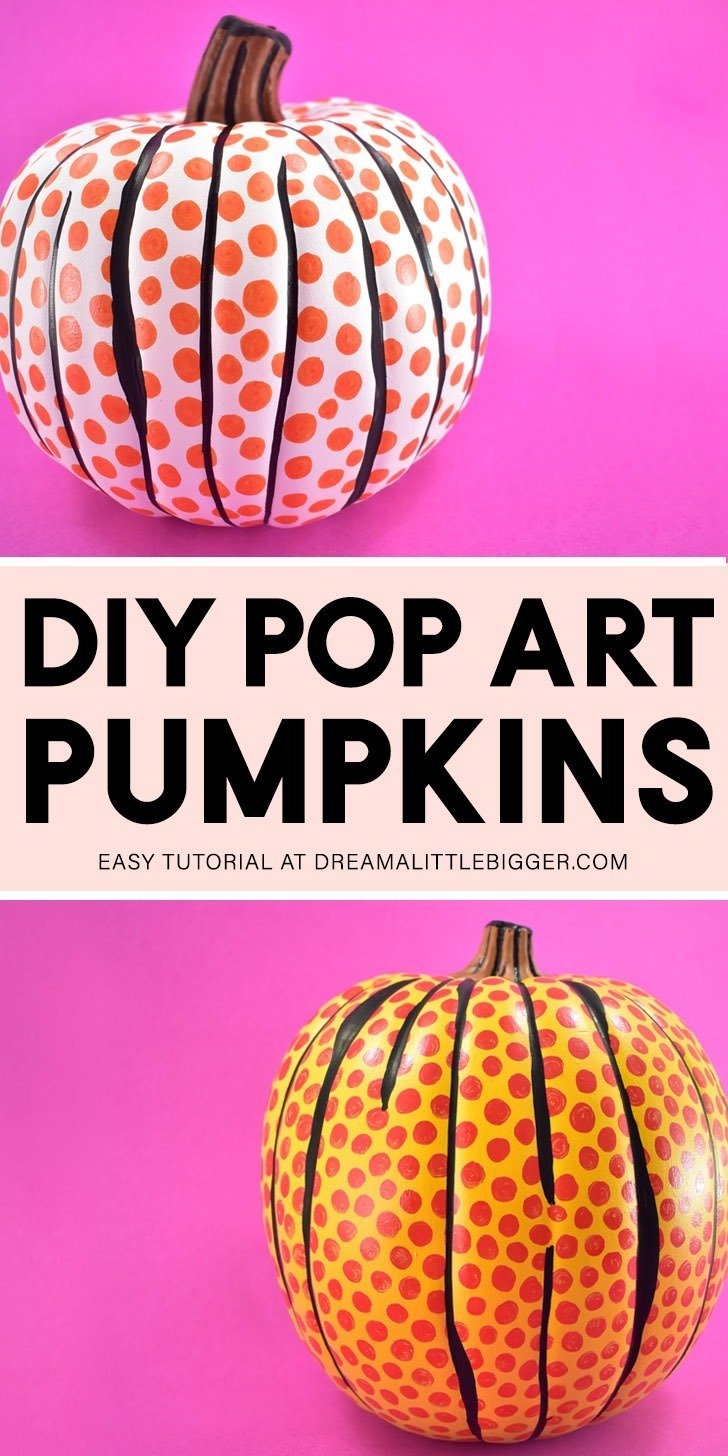