We have this lovely lady named Laura who Rob has come out to the house once a week to help me keep the house work under control. You see, Rob is not what we’d call tidy and each day I go around and pick up after him, often for about an hour a day. Over the 2 years I’ve lived here we have worked out a few chores that he is supposed to take care of and he does them probably half of the time, but, I must admit, he’s working hard to get better. When we realized he had never done laundry, swept or mopped the floors or whatnot, that’s when to compensate for this, Rob hired our lovely Laura who, I have to tell you, not only cleans up business, she also cooks up some mean mofongo and tostones and taught us the virtues of Mayo-Ketchup. <– “they ask if you want mayo ketchup and you say yes. Always.” :)

Every Saturday morning Laura shows up and takes care of the things I’ve not gotten around to or just haven’t felt well enough to accomplish and it is fantastic. Rob doesn’t have to help out around the house as much because he’s hired help to do his part and I’m totally okay with that. And so every Saturday afternoon, after Laura has taken off, we breathe in the air that is strongly scented by Fabuloso and enjoy the one day we have the most perfectly clean house :) 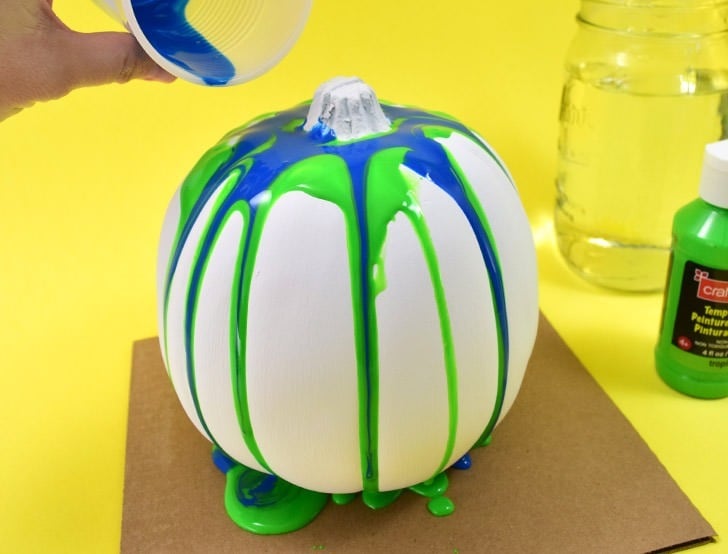 We don’t like to get in Laura’s way and so we tend to stick to our own spaces while she’s taking care of business. So I sit in my office and work and edit pics and all of that and Rob either paints or writes music in his studio. This last Saturday after Laura took off we found ourselves both feeling insanely antsy and so we got dressed and took to grab breakfast in town. That trip turned from hitting up Denny’s 2 miles away to going to the “big city” metro of McAllen instead. I’m not even sure how it happened. One minute we’re going to town, the next we’re in the next town over eating ice cream and potato chips and then I’m at the craft store in the city an hour over.

While we were at the craft store I decided to pick up some craft pumpkins and guess what? They were sold out. Completely SOLD OUT! Can you believe it? But then I found this one ginormous orange fake pumpkin while we were just sort of aimlessly browsing, hoping to wait out in the line to pay that wrapped around the front door (did I tell you that Halloween seems to be crazy popular in the Rio Grande Valley?) that somebody had hidden away. Score for me! And that’s when I decided I wanted to pour art this sucker. After discussing paint options with my resident art professor (for real, that’s what Mr. Rob does for a living) I decided to run over to the paint section and snap up some inexpensive tempera paints and, I have to tell you, this little project worked up quickly and turned out really well after a few failed attempts.

In fact, my coveted very last ever pumpkin sold at Michael’s in McAllen (I think :)? I royally screwed it up. Womp, womp. But I took some of my other pumpkins, primed ’em, painted ’em and learned how to actually do this well. Want to learn what worked for me? Let’s make some no cave pour art pumpkins! 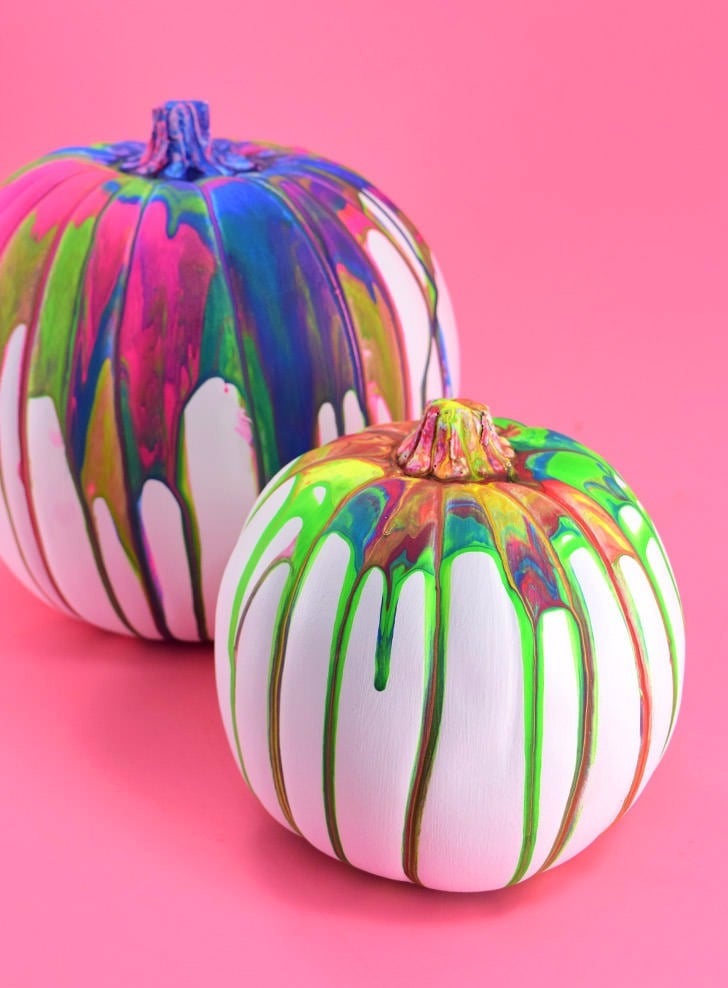 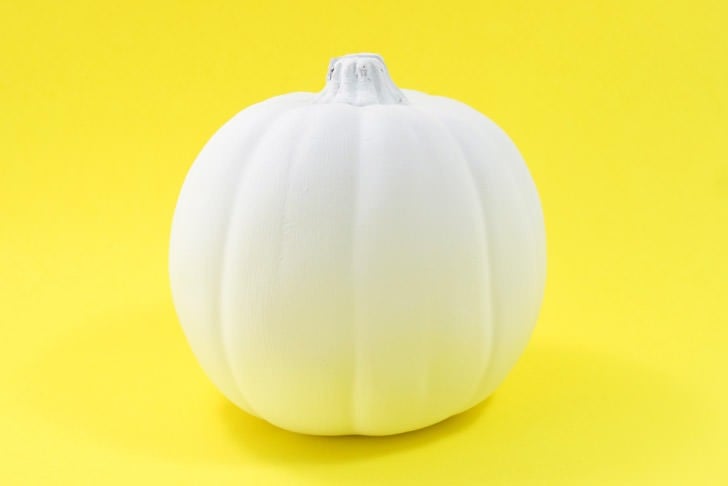 First off the pumpkin texture is really important. Any weird lumps or bumps are going to divert the paint so that everything below it will not be covered.

Also, tempera paints are thin and we might even be thinning some of the colors out even more, so a nice, clean surface with an even color will help to create the prettiest pours.

This is a small Michael’s pumpkin that was orange, but was painted with 2 coats of white chalk paint, allowed to dry really well between the two to prevent any unnecessary brush strokes that would create texture that might make the pour drip funny. If using fresh pumpkins, I’d pass on the paint and just go for it, but if you’re planning on keeping these for colorful Halloween decorations to come, I’d really consider spending the extra time priming your fake pumpkins before beginning. 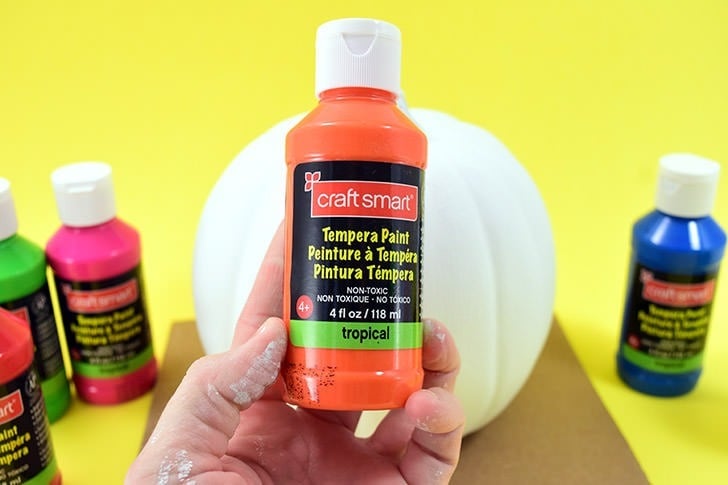 We’re using non-toxic, washable tempera paints from Michael’s making this a great kid safe no carve pumpkin craft. I purchased the tropical color set for some really vibrant colors. Now be warned that just because this is washable, it doesn’t mean it won’t stain. That pink stained the dickens out of everything!

These paints are already pretty thin, which is why Rob suggested them for pouring but some of them will be a bit too thick to pour smoothly. My pink was already very runny, as was my yellow, both pretty perfect for pouring. The others had to be mixed with water in disposable cups in order to pour onto the pumpkin rather than just drip.

The consistency is kind of difficult to describe. It’s not runny like water and it’s not thick like a milkshake, but somewhere right in between the two. This might take a bit of experimentation to figure out, so if I’d suggest a trial run to test paint thickness prior to getting any antsy kids involved :) 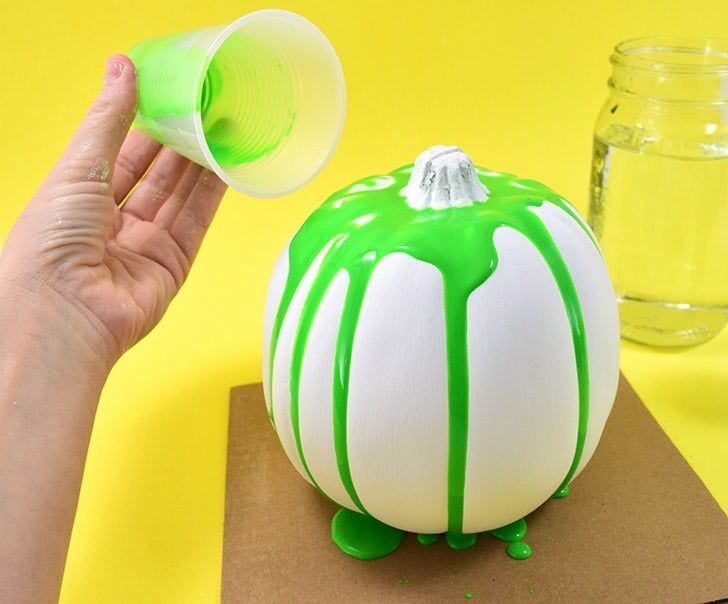 Once you get that perfect texture (this green paint, as it drip is FAB and exactly what you want, by the by) begin pouring the paint onto the top of the pumpkin. Now smaller ones (this is the smallest) you can pour right around the stem to get started or, if you want the color to spread further down the sides of the pumpkin you can start a ring of color poured further out from the stem. 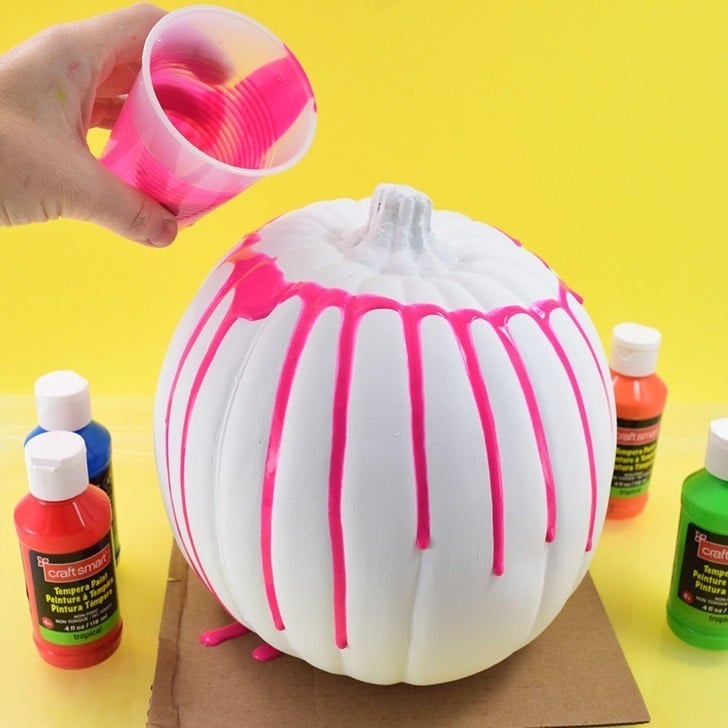 On bigger pumpkins, like my big boy, up there, you’ll definitely need to start further out to get that visible drippy pop.

Where you start will make a lot of difference in how the paint flows, but know that no matter what, the paint is going to primarily rush down the ridges in the pumpkins shape (like in the pic above) no matter how you slice it.

While the paint is still wet, continue pouring, alternating colors. 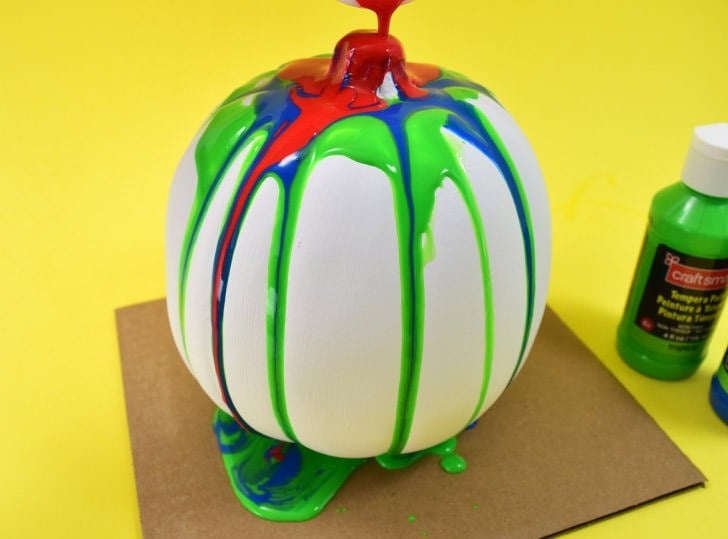 Though it seems like we’re using at on of paint, this is actually a less is more type of thing. The first I royally messed up was because I got crazy with the paint and it turned into a drippy, muddy mess. For each pour on my smaller pumpkin I used about half of a shot glass worth of paint or about 3/4 or an ounce, I’d say. For my medium sized pumpkin, which also turned out well but covered more and the colors mixed more, I poured a little over an ounce of paint each. 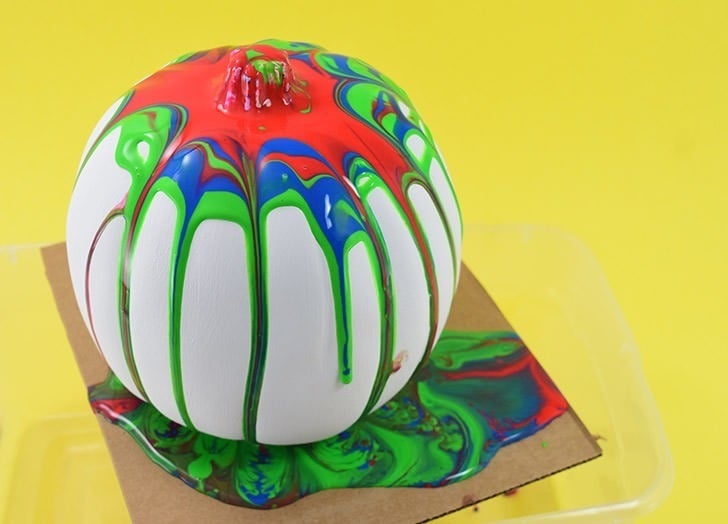 Now I didn’t cover this before in the tutorial but we’re going to cover it now… prepping your work area is super important. I don’t know what I thought would happen with all of that excess paint with a piece of cardboard below, but it wasn’t nearly enough to keep from destroying my work area :) That paint dripped off onto my clothes and my feet and my floor and my desktop. It. Was. Everywhere. I rushed a plastic tub underneath this business but a lot of the damage was already done.

What DID work for me s far as prepping goes was to work off of a piece of cardboard that was laid across the top of a cardboard box with some filler junk inside of it. Mine was just trash but you could also use old newspaper, or whatever. The paint would drip off of the cardboard and down into the box that, when done, I just tossed. 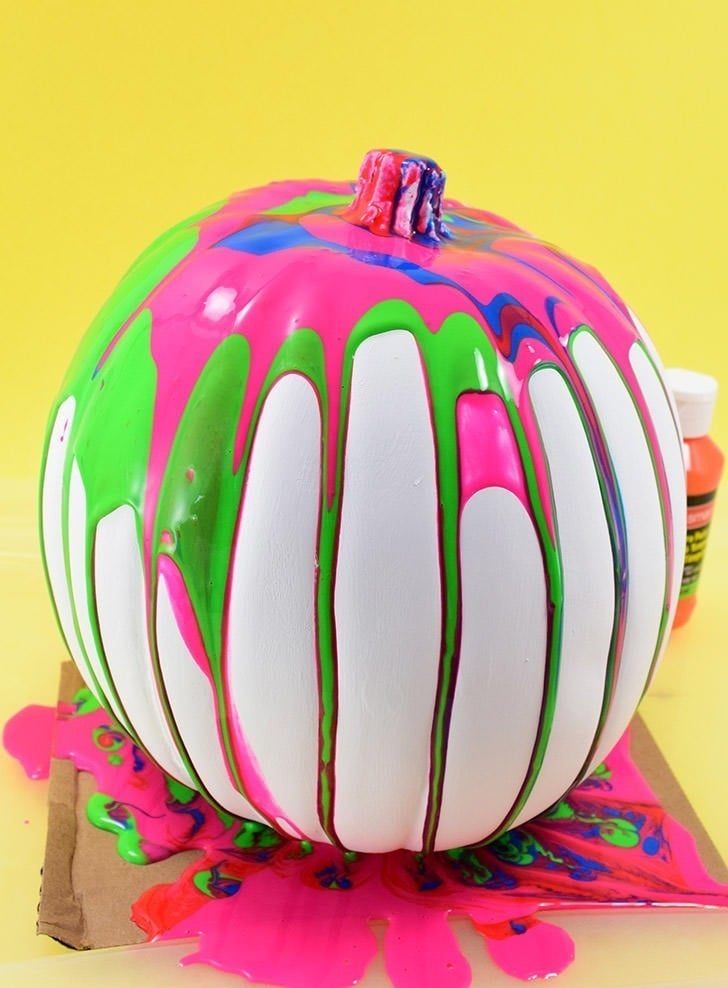 You can turn your pumpkin around a little bit to encourage the pour to spill down the sides more or mix together well. Note that the more movement these guys are subjected to the more the paint will move and mix which can lead to muddy, brown results. As such, I’d suggest working on your pumpkin in a place it can be left overnight (at least) to dry without being moved. Mine were transported across the house from my office, filled with cats and thus cat hair, to the garage where they could sit undisturbed overnight and that changed the paint job that I was so excited about sitting at my desk. 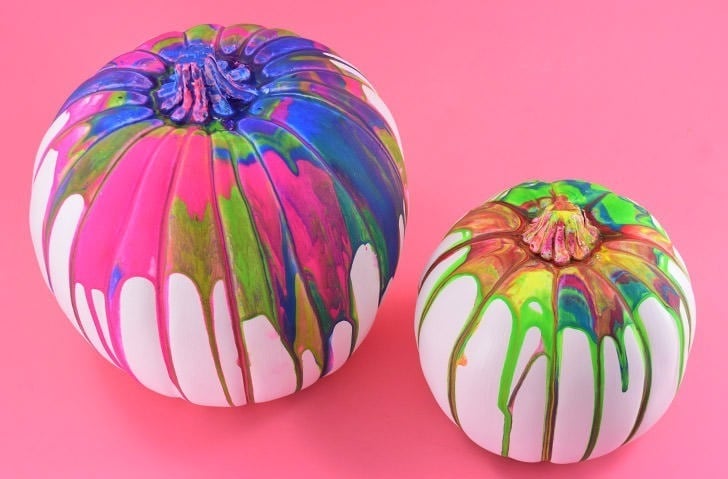 The paint jobs suffered a bit for the extra jostling that encouraged the paint to spill and mix a bit more than I had hoped. I actually wound up going over the pumpkin on the left with another pour of blue to help cover some of the uglier mixing of paint when I had hoped for a more pink and green finish. 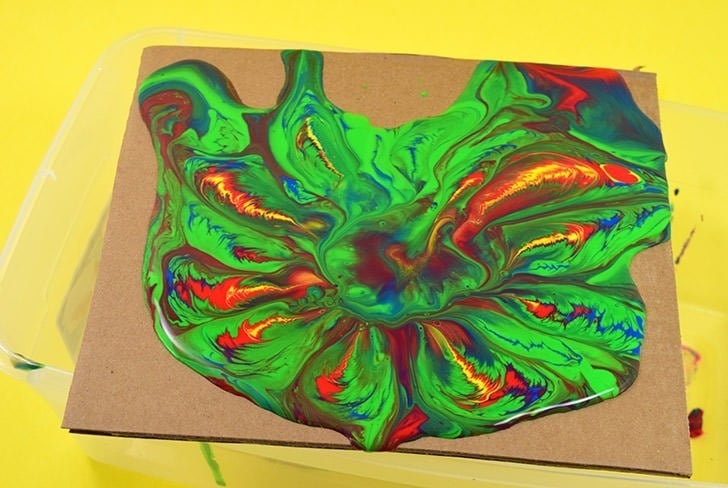 But, hey, look at that cardboard below the pumpkin… pretty fab right? These pieces can also be twisted and turned to fully cover the board and allowed to dry for pretty little art pieces. 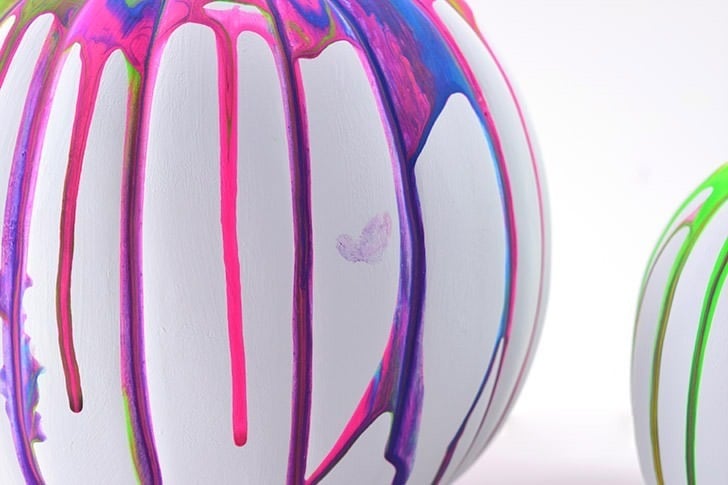 When your pumpkins have fully dried you might find a finger print or area you just aren’t happy with. Luckily with washable paint you can just grab a damp paper towel and take that business out! Unless it’s like my stains everything it touches pink, in which case you might want to dab on a little bit of your base paint (if applicable) to help clean up any wonky areas. 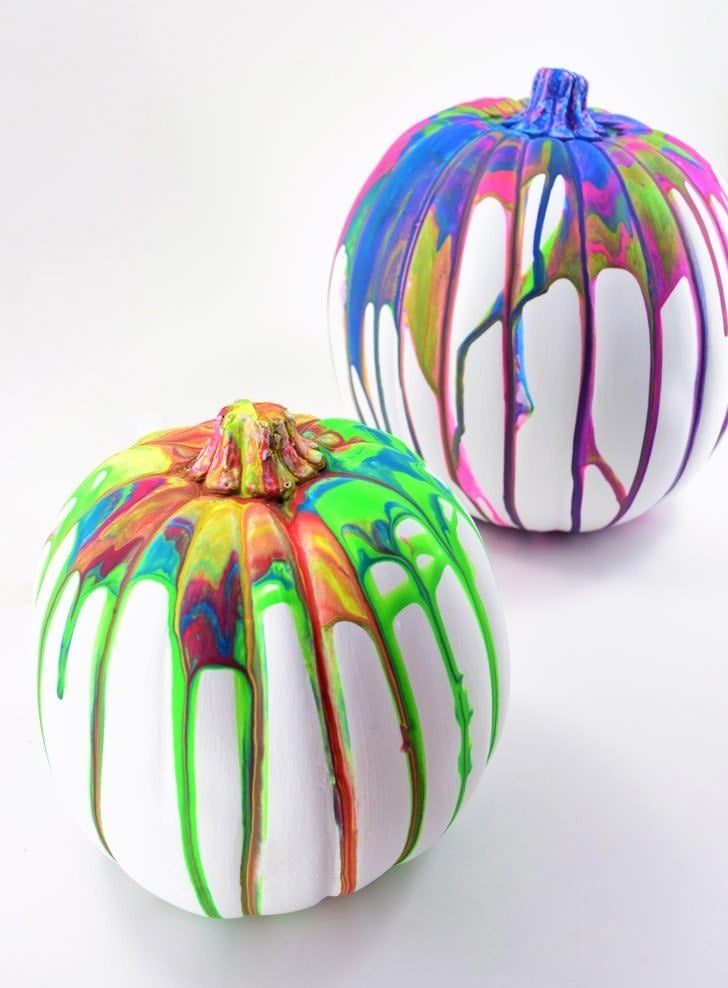 Tempera paints dry super flat and they lose a lot of the vibrancy they had when wet. In order to bring back that bada-bing, finish each pumpkin with a clear spray, like polyurethane. I’d encourage this for real pumpkins you’re going to toss, too, just to get that pretty pop of color back. The glossier your spray, the more vibrant your colors will become.

At the beginning I was super stoked about my pour art pumpkins and that quickly turned into me having a HUGE mess to clean up BUT in the end, I feel like I had pretty good success with 2 out of the 3 pumpkins I poured and, with my tips, you could be batting a thousand! :) 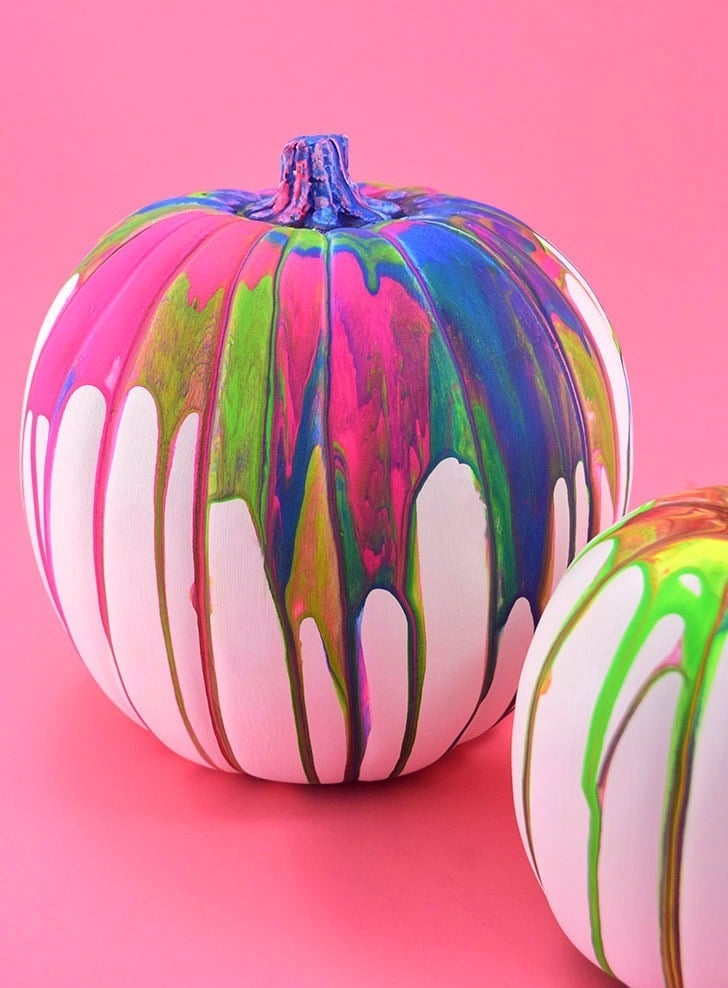