Learn how to mat vacation photos with a map of the location of your trip. It’s a quick and inexpensive DIY to personalize those holiday snaps!

It was summer 2017 and summer plans were mostly up in the air. In the past, when I lived in Oklahoma, my sister and I would take the boys to Texas to visit family for a week or two and then head back home in time for Sooner football. But after I moved really far away we flipped the script and my parents, grandmother and I would all go up north to the Okies instead. Especially in those first 2 years living at the southern tip of Texas, this arrangement was perfect for me. I was homesick and wanted nothing more to be back in Oklahoma almost as much as I wanted to see my family.

But in 2017 everything seemed to change. My sister was busy with stuff she needed to take care of, the boys were climbing up the walls with summer vacation version of cabin fever and my grandmother didn’t want to go dang well anywhere. And so, when I was desperate to see my family and with the boys eager to get out of their house, my sister and I arranged the 2016 Texas tour. Rob, my mom and I drove up to Oklahoma in my mom’s big SUV, grabbed the boys and their suitcases, headed southwest and visited family in West Texas for 5 days, then turned southeast to San Antonio where we stayed on the Riverwalk and vacationed for 4 days, kept trucking south to the Rio Grande Valley and hit up the beach for almost a week, then started back toward Oklahoma with a stop in Houston for another 5 days at my parents’ house, went up and grabbed my sister and headed back to Dallas for a long weekend. Whew. We basically made a big ol’ circle around the state of Texas in a 3+ week trip, our Texas Tour. And Texas is BIG, y’all. I just Google mapped it, and just driving to where we were staying, without any side driving to attractions or whatever, we drove 1,824 miles that summer. INSANE!

This year we were all kind of late to the party on deciding what to do. The boys had more activities and didn’t want to be gone for almost a whole month of their summer but they still wanted to get out of town for a while. And so, with about 2 weeks notice I planned the 2018 Texas tour. This year I flew up to Oklahoma, then the boys and I rode an Amtrak train to San Antonio (which the boys kept calling San An-tone and that business drove me batty). Then we stayed in a really cute AirBnB house and we vacationed for 4 days straying much further from the River we only visited the year before. In a rental car that just so happened to look exactly like my personal car (same model, color, just more bells and whistles, ha!) we drove down to the Rio Grande Valley and beached up the joint and made our first action movie. Then I took the boys to my parents’ house and my mom drove them back home to Oklahoma. The 2018 Texas Tour turned out to be much shorter, but no less awesome. :) 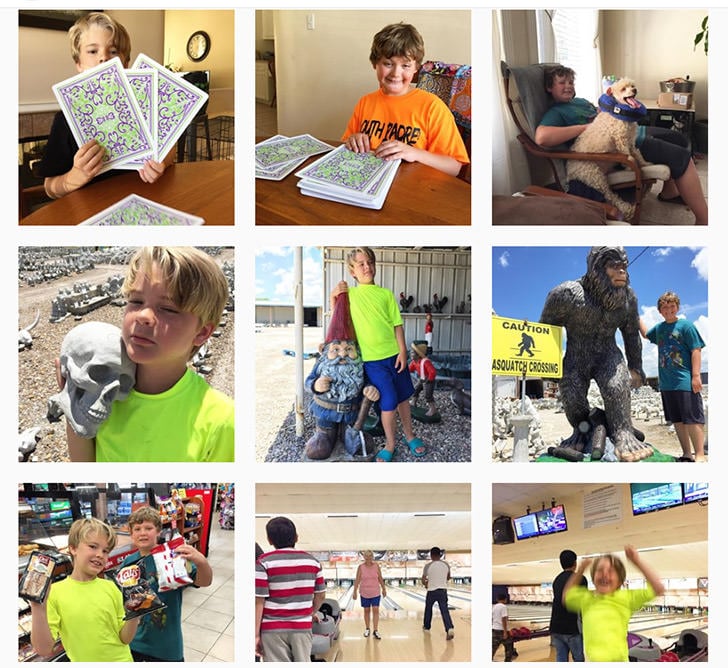 I’m bad about losing things. And since my camera is a big part of my work, I didn’t take it with me for either of our trips. I mean, I had kids to look after all over the place, which I’m not used to, and I didn’t want to keep up with anything that wasn’t totally essential. Heck, last year I chopped all of my hair off so I’d have one less thing to deal with :) With only my phone for pics, I started a private Instagram account with literally only one follower, my mom :) Every great snap I took, I’d post it over to save it for all time.

You can do so much with an Instagram account these days. You can totally connect your IG account to an online printer and have your photos professionally printed up that look super great to use around the house. You can even have those photos turned into a book, cool, right? We did that last year, handpicking our fave photos to include in a professionally printed souvenir at Chatbooks. I haven’t gotten around to the book for 2018, yet, but I did get a bunch of prints run off at Walmart. 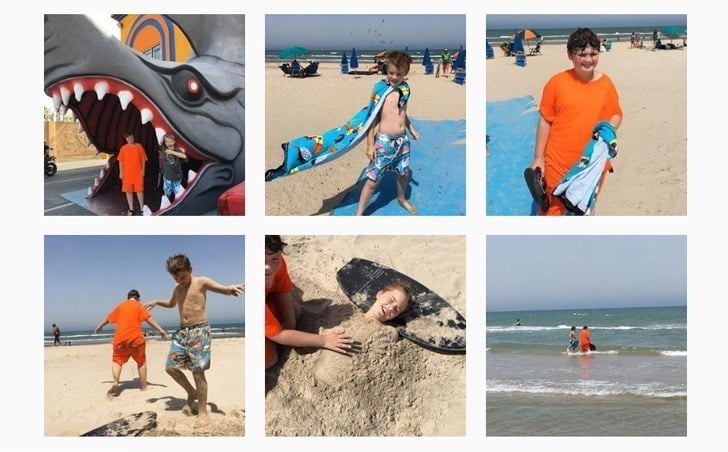 Since most of our Instagram photos are square, I had a whole bunch of squares printed up. 4×4 prints were cheap in store in 1-hour but the bigger 5×5 prints were half the price to order online so I placed my 2 orders and then ran to the store and waited for the others to arrive in the mail. But then I realized I could also print the standard 4×6 photos, choosing where to crop out parts of the square photos so they still worked. Huzzah!

Since I literally have tons and tons and tons of Belmont frames from Michael’s because I buy ’em in bulk when they’re cheap (you can get the 8×10 size for $4.80 if you play your sales price and coupon cards right!) I decided to frame up a few of my favorites. But they just seemed so “blah” even in their colorful frames. And that’s when I decided to snazzy up the mats with the maps from the location the pics were taken. Cool, right? Because it’s like DOUBLE the souvenir because it’s a vacation picture surrounded by a map of the place we vacationed at. Dude, I think it’s so cool :) 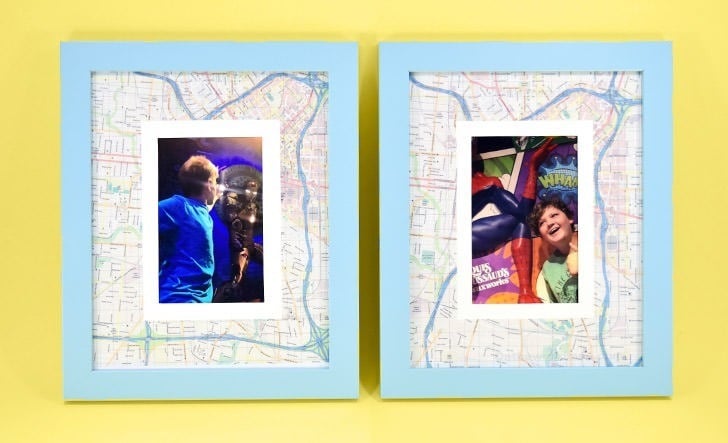 I mean, isn’t it? Those photos up there were taken from our day on the Riverwalk in San An-tone, haha, keeping busy at the wax museum waiting for our evening at the local magic show, which was totally cool. We also went to a mirror maze (totally frustrating) and Ripley’s Believe it or Not.

Since those photos were taken in San Antonio, I used a map I found online of, you guessed it, San Antonio! I found this site, ontheworld.com where I could print free maps of just about anywhere, including the areas of our trip.  And so I printed out a couple of the big city and then a few more of the Gulf of Mexico. Boom! Quick, easy and cheap. Want to see how to do it?

This is how you custom mat vacation photos with a map from your trip location. 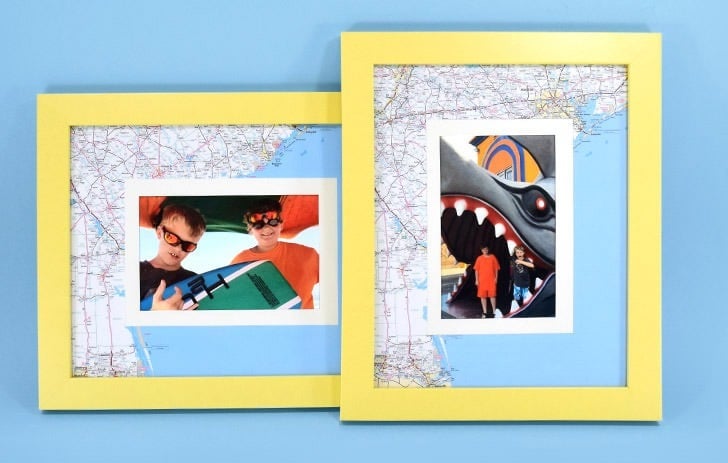 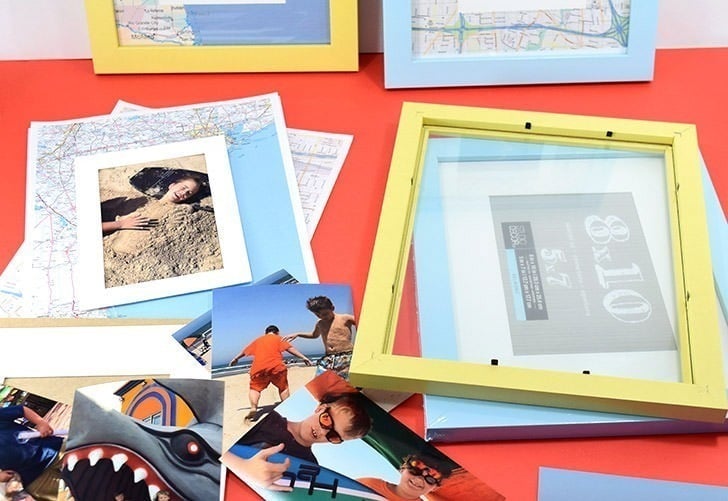 The hardest part, in my opinion, is selecting your favorite pictures to frame. I decided I was only going to frame FOUR and so I framed and re-framed about a dozen pictures until I was happy that I got THE FOUR perfect snaps from the trip :)

The biggest Walmart could print my Instagram photos without any blurring and distortion was a 4×6 size, but that’s perfect in an 8×10 photo frame so that we get a nice, big map for the mat. 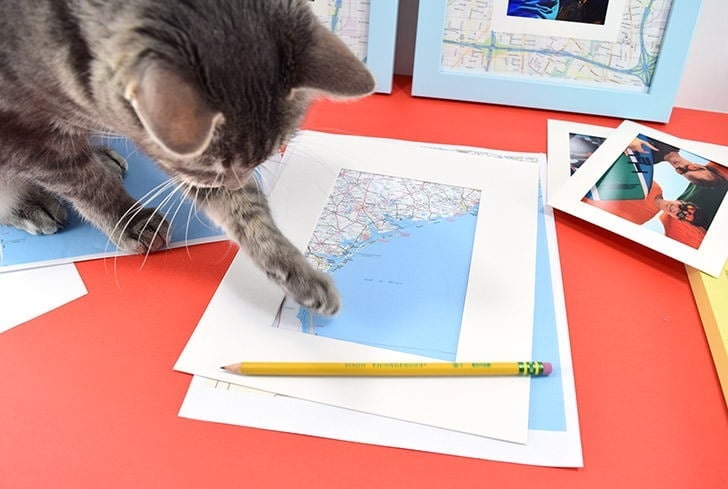 Print out the maps at 8×10 onto regular printer paper or cardstock. Using the mat that came with the frame as a guide cut down your map to the same size. You can either trace out the shape of the mat onto the print and then cut out with a straight edge, or you can use the mat as the guide straight with the knife. This is what I did, in the end, but I was really careful not to cut the mat. Do you have any idea how expensive those suckers are (pssst, I went to buy a replacement and it was MORE than buying a frame with one already in it – gah). 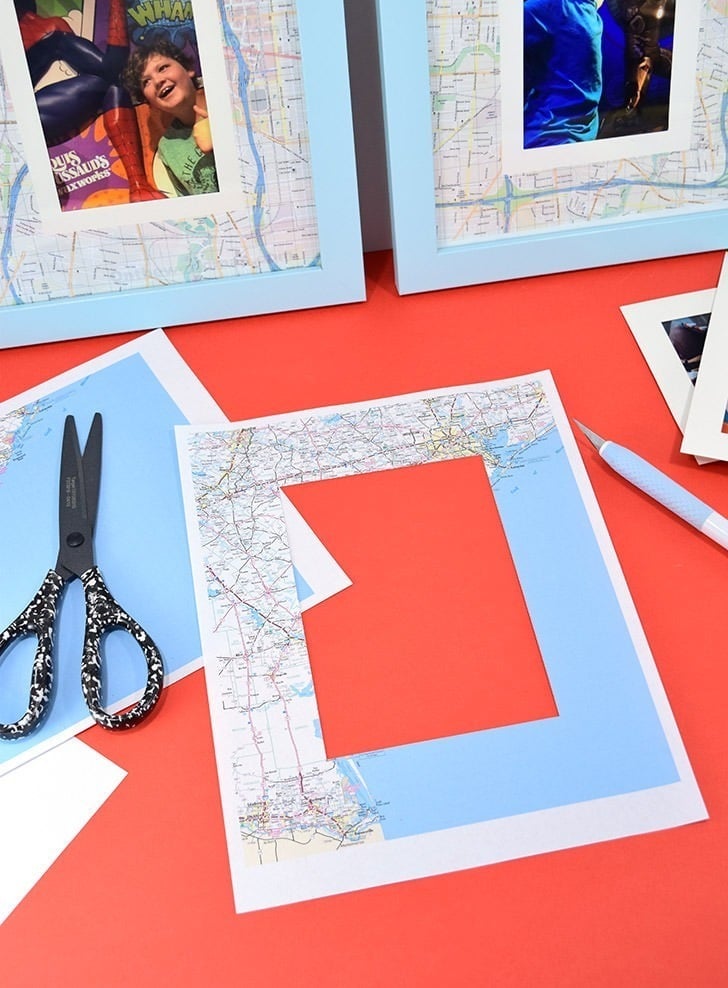 I just swiped that craft knife around the inside of the mat and then grabbed the scissors to cut away the excess around the sides. Super fast. Super easy. Super cheap. 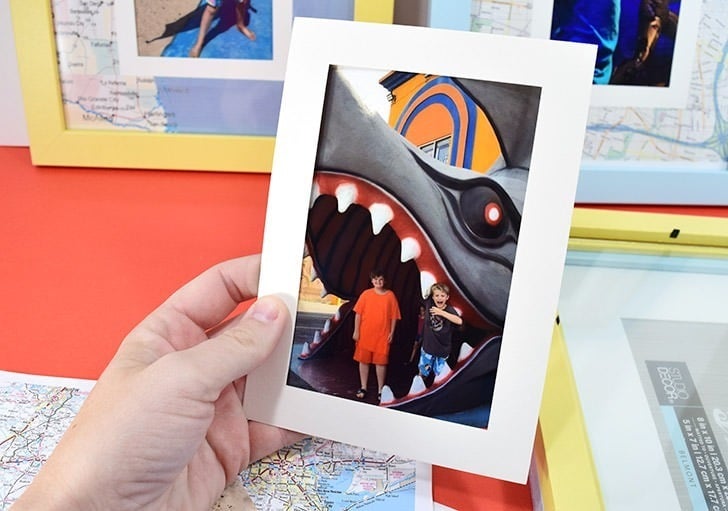 Cut down a piece of white cardstock to have an opening of 3.5x 5.5 inches and make sure the outer measurement is at least 5 x 7 inches (a little bit larger than the measurement inside of our map mat we just cut which has an opening of 4.5×6.5 inches). You’ll need a straight edge to accomplish this unless you have 4×6 photo mats you can also trace. And just FYI, this 18″ clear acrylic straight edge by Fiskars is my bae. And I’m not even really sure what bae means except that it’s somehow really good, I think like Beyonce, but if you’re looking for a ruler, the hash marks on this sucker will improve your crafting life, I promise you.

Center your 4×6 image inside of your smaller, white mat and use a little tape, whatever you have on hand, from the backside to hold it in place. 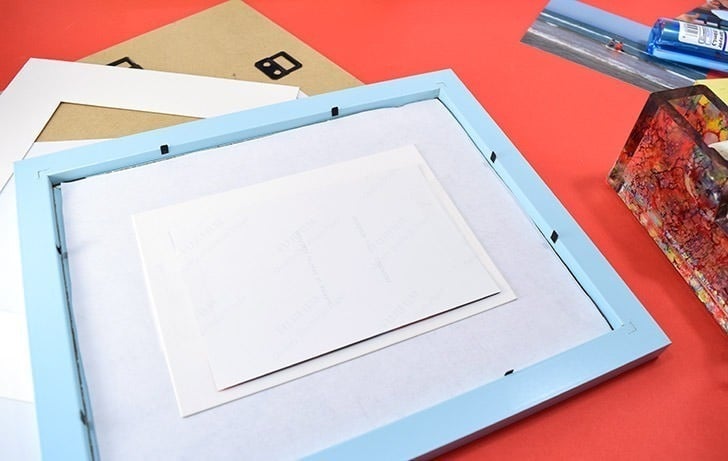 Place your map mat behind the glass and then center your white mat in the opening as best you can (mine are a little off but you don’t really notice unless you look super hard, so don’t sweat it too much). Use a little tape to keep both mats in place together. Now rest the original mat that came with the frame behind all of this business.

Wait? Why didn’t we just decoupage the map onto the mat? Well, because I tried that first and for some reason, the darn thing bubbled up like freaking CRAZY. I have NO CLUE what went wrong but after seeing the price of a replacement mat and refusing to pay $17 for a big ass sheet to cut out a new one I decided that I was going to temporary this business up like crazy. Because what if next year I want to change photos and I don’t want a mat with the Gulf of Mexico prominently displayed on it? I’ll have to get my cheap butt out and pay for these things and that, my friends, just isn’t gonna happen :) So we’re gonna toss them behind our homemade business so IF we need them, we have them. Cool? Cool. 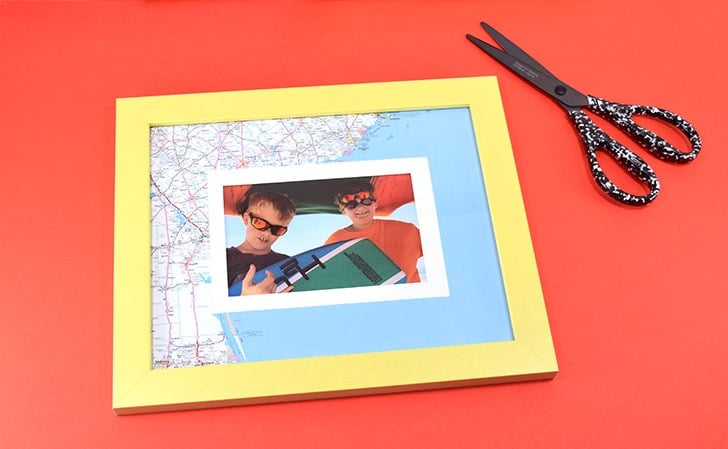 And look at that. Can you seriously tell that the mat is just a computer print out, because I sure as heck can’t. It looks good, am I right?

And not only that, it MEANS something. For instance, on this day we went to a pay beach on South Padre Island where Rob and the boys boogie boarded in the ocean for almost 5 hours. The next day we were going to be starting back toward Oklahoma, so on our way off the island we stopped at a gift shop that has a gigantic shark around the front door, snapped a pic, snagged a vacation tee and headed back over that bridge home. It was a simple but really good day.

And the pics that I have hanging on my walls, and the ones I’m going to give to the boys, are a handmade reminder of some really good times that we photographed, sometimes with me laying on the nasty ass ground because that, my friends is the only way to get the darn shot, and that means something, right? Right :) 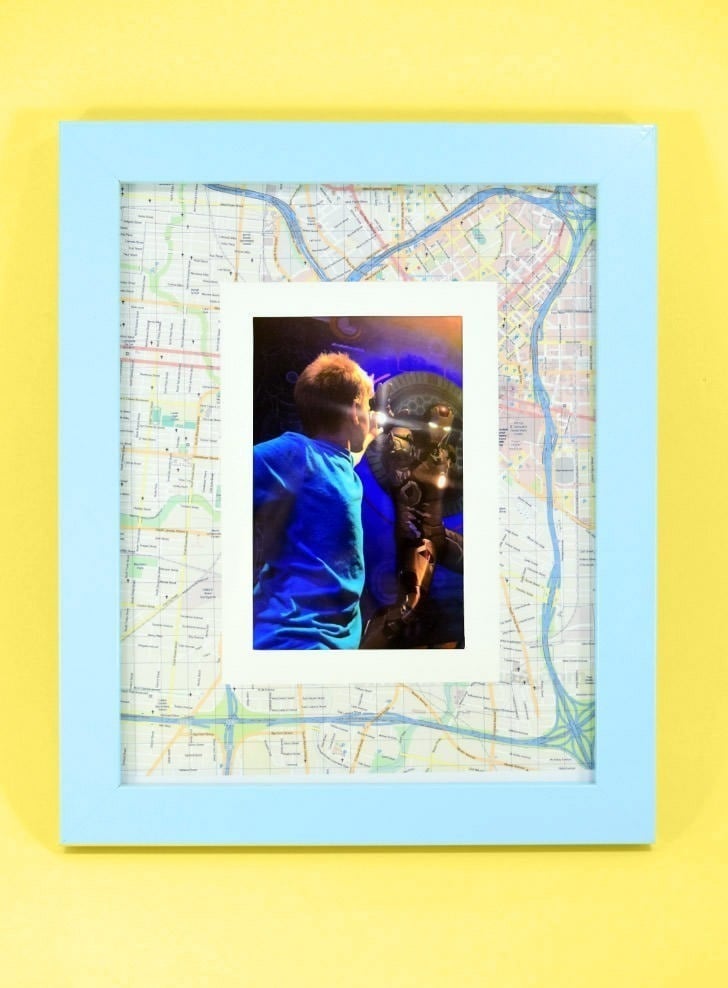