Want to make incense at home? It’s super easy and can be made as strong as you please with your favorite scents! It also makes a great housewarming gift!

I’ve mentioned it before but I have a tendency to get on this train of thought that starts at a totally normal place and ends up in crazy town by the time I have veered off course once or twice. Or, more realistically for at least an hour and hopefully I don’t detour to someplace that gives me nightmares :)

Rob’s been off work for the past week because it’s spring break and being a college professor has its perks. I hadn’t realized the timing of his vacay and so we have spent the past week just hanging out. Last weekend I started making an afghan and I knew it was going to be a long-haul type of thing and so I started a new show to binge and crochet to called Wentworth. As it turns our Rob got sucked in about mid-season 1 and we’ve been binging it all week trying to get through 5 seasons before he goes back to work. Because once he does he will have little time for TV and I’m going to be desperate to find out how the show ends!

At any rate, Rob left me with my crochet and asked me to NOT watch my new binge-fest until he got back from the gym. Freaking SIGH. And so while I sat there and waited the hour and a half I decided to look into if this show I’m obsessing was based at all on a true story. Basically, I go online and figure out a prominent character that gets killed by another prominent character and instead I’ve been sitting around watching 3 seasons of a show waiting for the other shoe to drop. Bah. I’m not even sure how I got there but dang if I did. At least I didn’t find myself reading about terrible people who do terrible things like most often happens when I start off with something NOT prison based like this. For example “what is an albumen?” naturally leads to how an argument over scrambled eggs leads to real life MURDER. 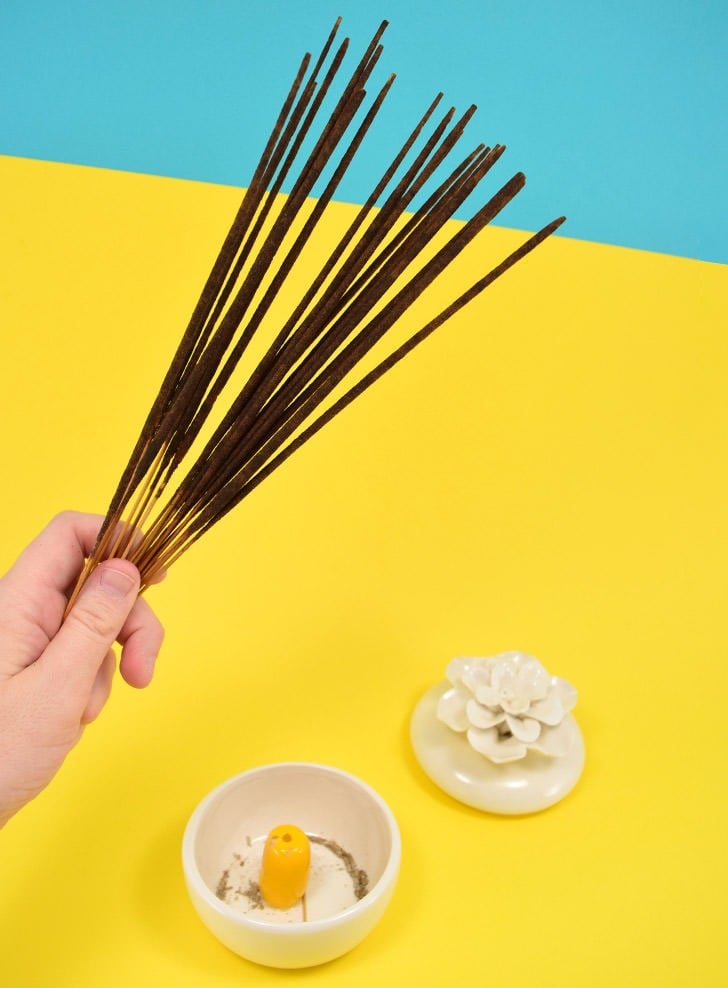 This whole online journey thing I do is how I decided to start making my own incense at home. Now I was going to make some from scratch using a bamboo skewer as the base but seeing as how incense is much like a long-burning fuse and needs to combustible. And seeing as how I am in danger around a craft knife, these days, I decided to draw the line at creating something scarily defined as “combustible” and found pre-made unscented incense sticks that I just add my own aromas to which feels much safer to me :) Ooh, I also made some incense holders that kind catch the oily ash and hide away the mess, so be sure to check that one out, too!

Want to learn how to make incense at home? 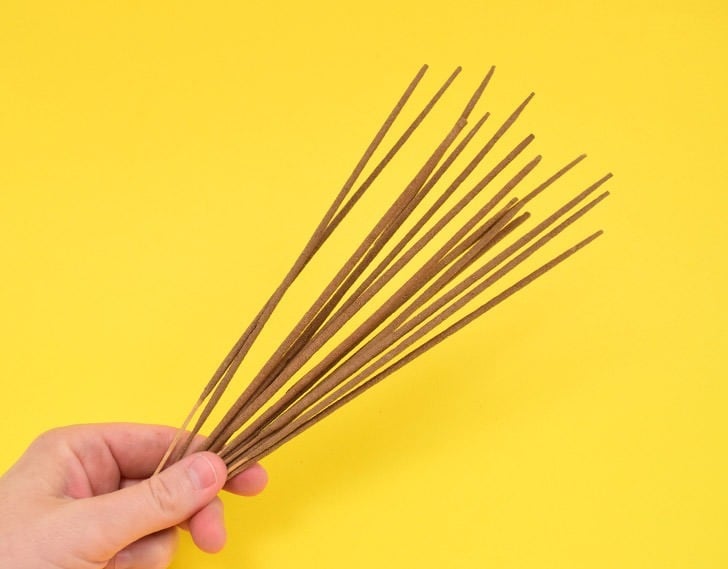 These are unscented incense sticks and can be purchased in a bundle like I’m linking to here. 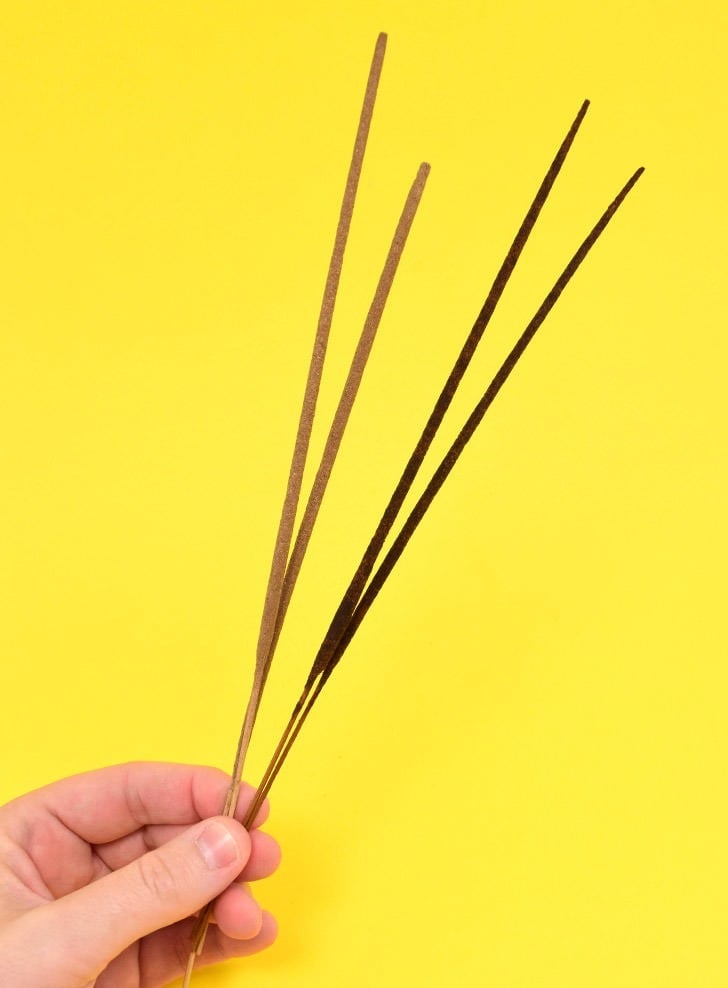 The ones are the left are unscented and the ones on the right are fabulously floral and ready to burn and obviously look (and smell) very differently, so no worries about mixing them up! 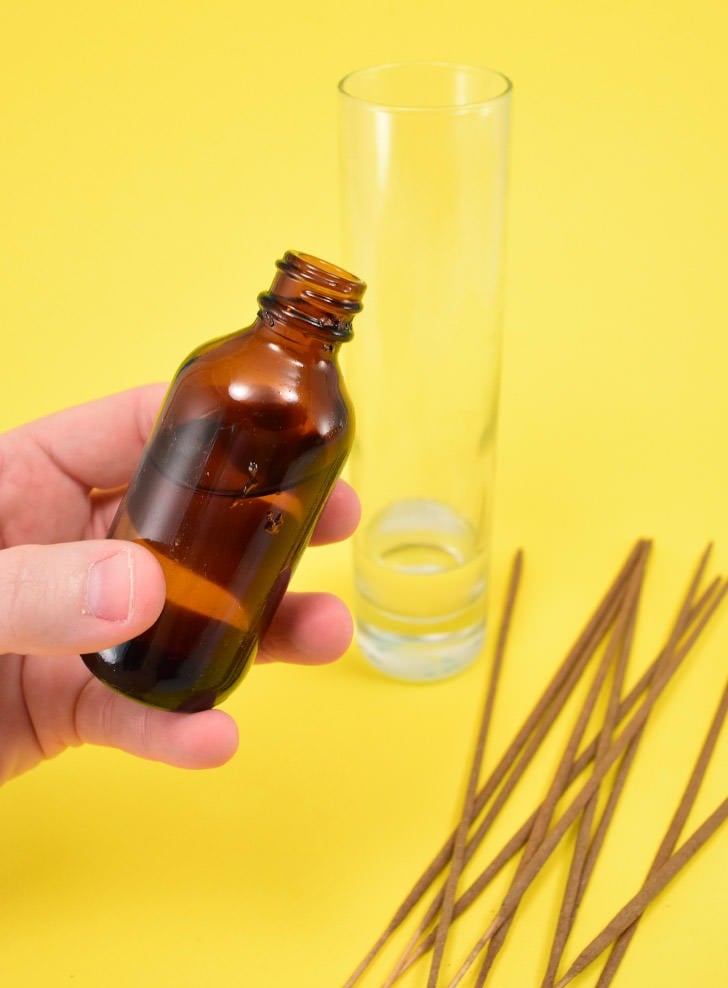 You’ll need a vessel to soak your incense blanks in scent. I used a glass vase I snagged at the dollar store that’s tall but really skinny so it won’t use a lot of supplies to make just a few sticks of incense. You can also use a plastic tub with a lid but I wouldn’t consider it food safe after this project to be safe.

In your container pour 50% dipropylene glycol and 50% fragrance or essential oil(s) and feel free to totally eyeball it or play with the ratio for a scent strength you’re happy with.  Now if you’re wondering what Dipropylene Glycol (DPG) is considered a carrier for fragrances in both beauty and home practices. 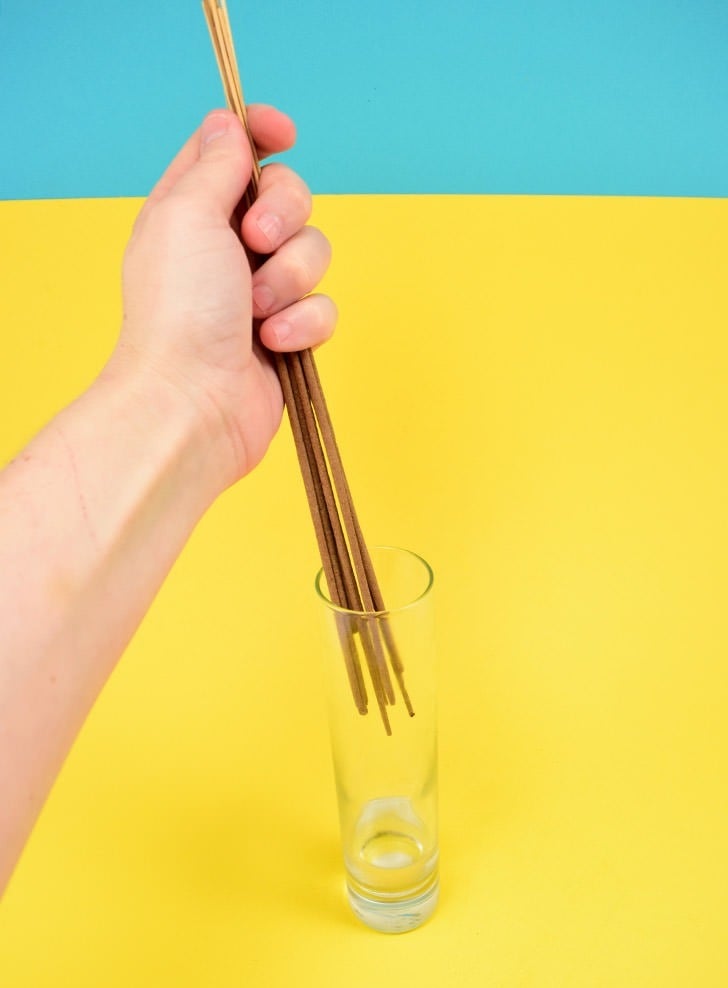 Drop your sticks into the mixture. In my small vase, I’ve made a batch of about 30 sticks at once, but you can also make smaller batches to make a larger variety of scents you have to choose from. 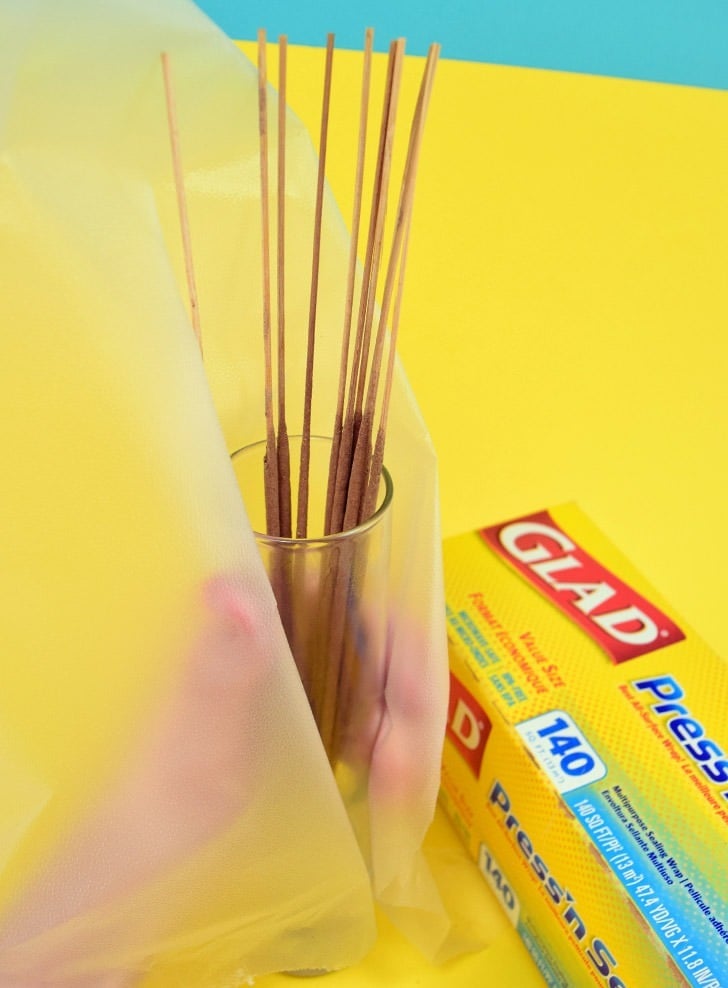 If you’re using Tupperware just pop the lid on. If you’ve gone glass vase, carefully wrap your vase in Glad Press and Seal  making sure you’ve got a clean, air-tight seal around the glass. Take the wra nearer the bottom of the vase, just to make sure you seal this business in as much as possible to prevent leaking. 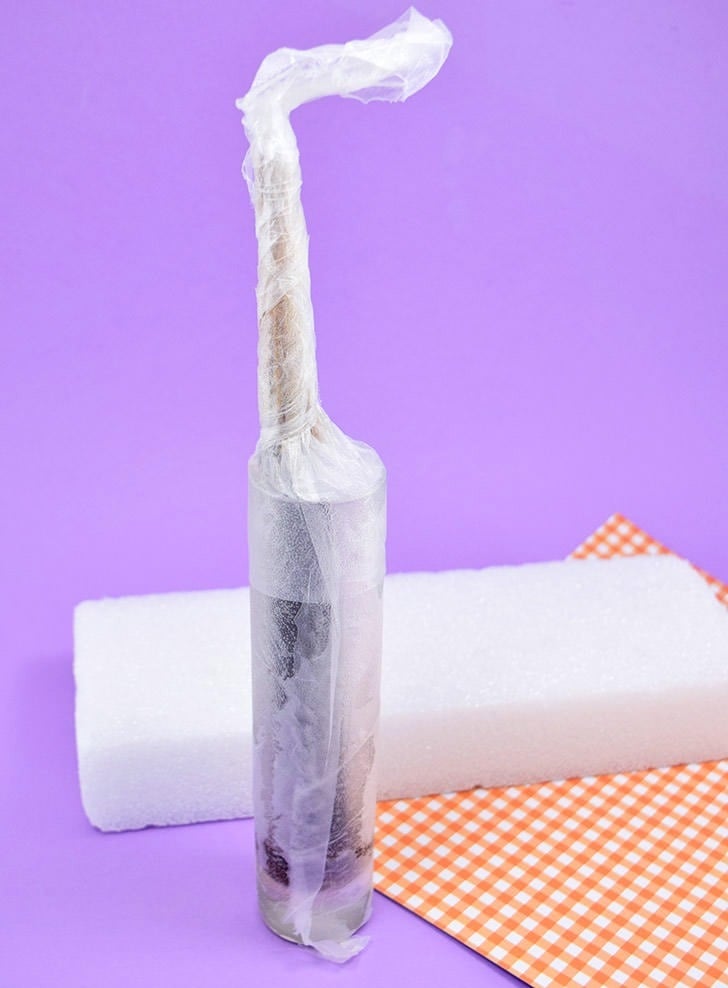 Keeping all of the stick ends together to go over the top of the vase and around the sticks, sealing everything in together. Go over everything one more time to be safe, tip the vase on its side with the incense sticks on the bottom and allow to soak at least 24 hours. 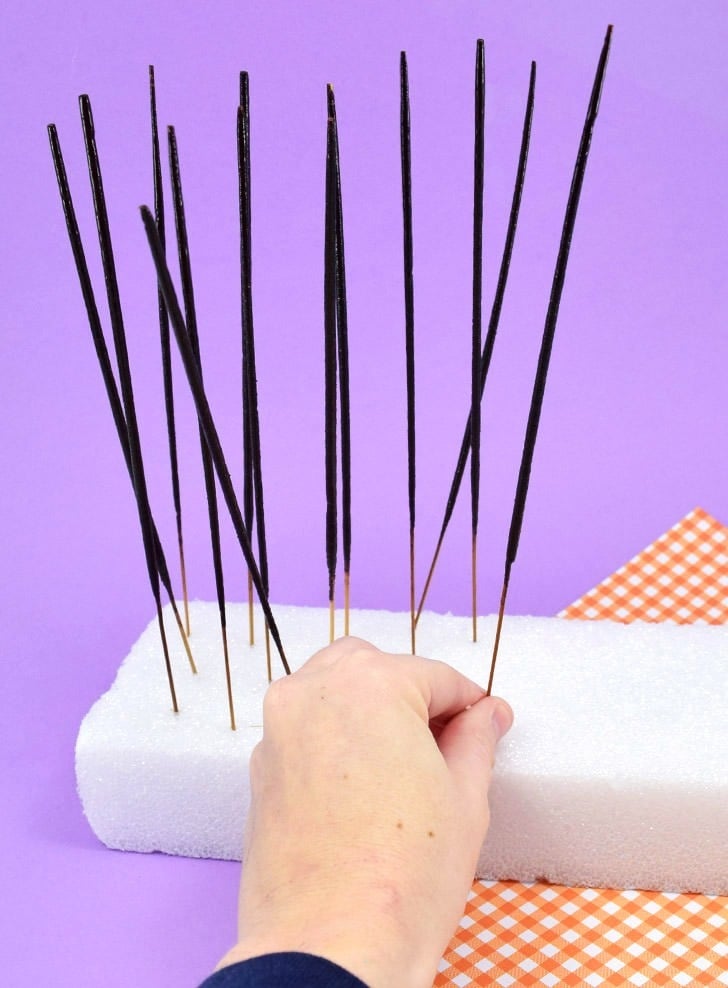 When your 24 hours are up, carefully unwrap the seal and remove the incense sticks. Place each incense stick in a piece of foam so that they stand and do not touch one another. Allow to sit until fully dry. Once dry, they’ll no longer be wet to the touch but will be greasy. I live in a humid area and so my incense takes about 72 hours to fully dry.

Now I have to tell you that Mr. Rob is a big fan of my homemade incense and he told me that it smells “SO GOOD” in an all caps kind of a way before asking if the house smelled bad :) The good news is incense can be scented very strongly so that when your house does smell bad like, ahem, for instance when you have a cat with bowels from hell, it will cover the bad odor easily with a good one :) 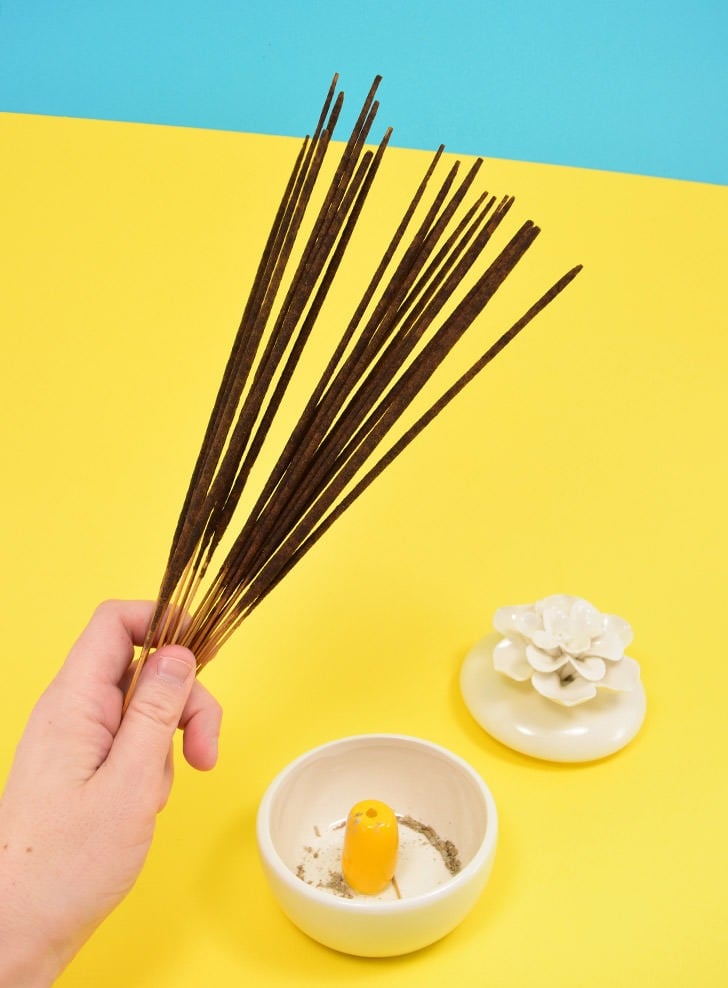