Today we’re going to learn how to latch hook. An easy and rewarding craft project! 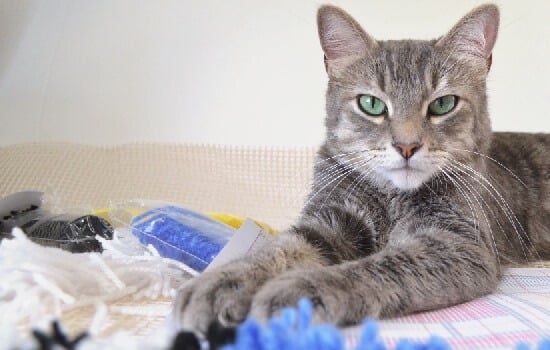 My love of scatter rugs has been well documented on this blog here, here and here. In fact, this has been a thing with me for as long as I can remember… When I was a kid, we had these gigantic pillows that acted as floor cushions that we’d use to rest our head on the ground, or curl up on for a nap. We even took these big things to the drive in movies where my dad would pop open the back of his Bronco and we’d recline in comfort and watch the flick.

Those cushions Momma made herself, out of carpet remnants. I remember running my fingers through the shag absentmindedly while watching The Smurfs, cuddling up with one when reading a book and once when I was really little, snuggling up on one with a mug of hot chocolate, crying because I didn’t get my way (and thinking that I must look very grown up with my steaming mug in my hands). I have a ton of memories where those gigantic brown pillows are included in the background.

When I got my first place as an adult I purchased cheap sheets, cheap towels, cheap dishes but I splurged on an ivory 2 inch shag throw rug. I’d lay on the floor with my new puppy, Virgil, and run my fingers through that rug. I loved that rug.

And then a few weeks ago I was cleaning out the garage and I found that very rug in my keep boxes and I ran my fingers through and set it aside to wash and bring into my bedroom. But somehow things got confused and I found myself crying outside of a house wares donation box in the rain when I realized that, in the flurry of making my second or third trip to the box that day, I had accidentally donated that very rug.

It’s silly to cry over a rug, I know it, but I decided that I would learn to latch hook so that I could make one very similar. Today I’m sharing with you the basics and in a bit, perhaps a week or so, I’ll share with you the pattern I created for the rug I’m currently working on.

To work on latch hook you need: 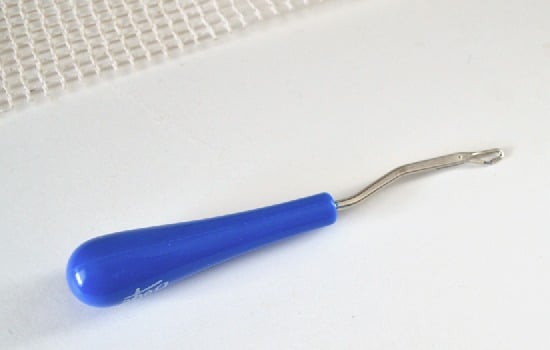 This is a latch hook tool. They cost between $3-6 and feature a variety of handles. I purchased the one shown above and a wooden handled one but I greatly prefer the plastic handle shown. 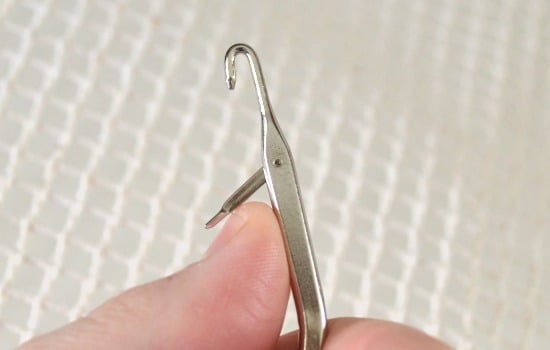 And here is the “latch” on your hook. It fits loosely up against the upper hook when raised and rests on the metal shaft when in the lower position. It moves freely and easily between the two positions. 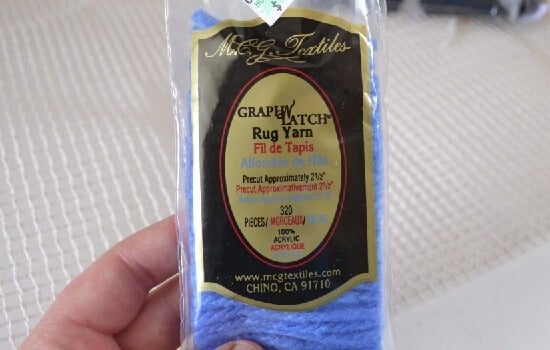 This is pre-cut rug yarn. Since this was my first rodeo, I decided to use the precut so that I’d have one less thing to worry about. That worry being that I jack up a bunch of rug yarn by not cutting the pieces evenly. I’ve been through about 10 packages at this point and I’ve found that there are going to be some (and sometimes entire packages) where the length is different but it’s still surely better than if I cut all of these pieces by hand. 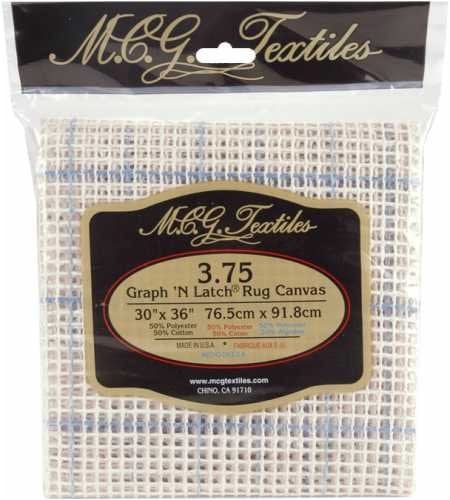 This is mesh rug canvas. I purchased the 30″ x 36″. When working up your rug, you need at least 1 inch of canvas on all sides when done latching. 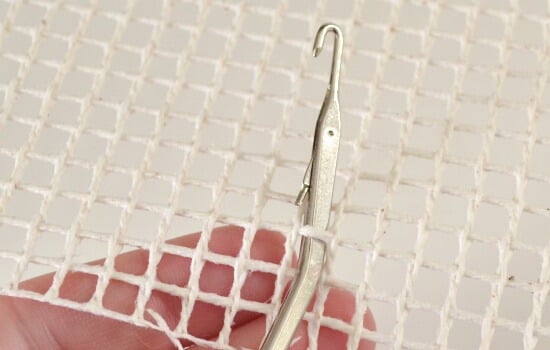 The canvas is stiff and kind of scratchy and looks like it is made of rope. In one direction the rope looks solid and in the other the rope looks twisted. When latching you’re always going to work off of the rope that isn’t twisted, or the one that appears to be a more solid piece.

Push your latch hook up underneath the first section where you want to place your yarn. See how the canvas makes a line across the tool? Push the tool up high enough that the latch mechanism is above that line. 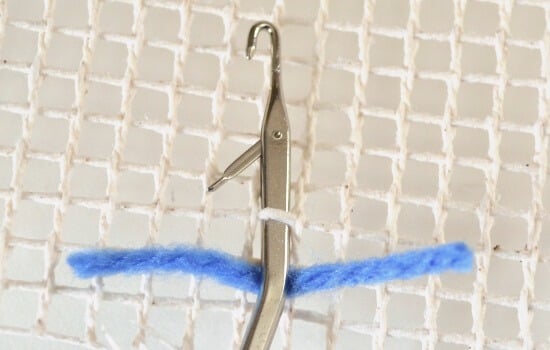 Take a piece of your rug yarn and run it underneath the tool UNDER the line the canvas makes on your tool. 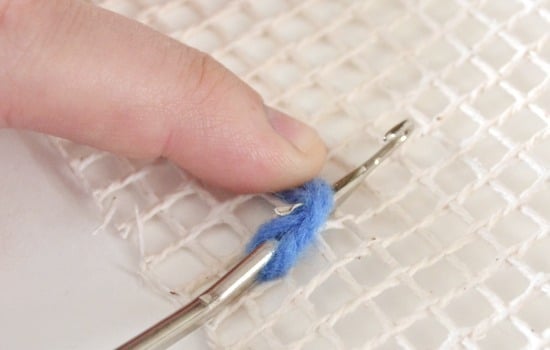 Pinch the two ends of the yarn together and wrap both pieces into the open mouth of the hook. The latch will stay in the downward position. 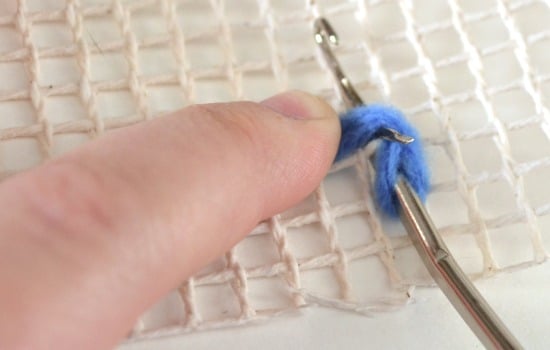 And just because I couldn’t decide which picture best explained the step above, here is this one, too. 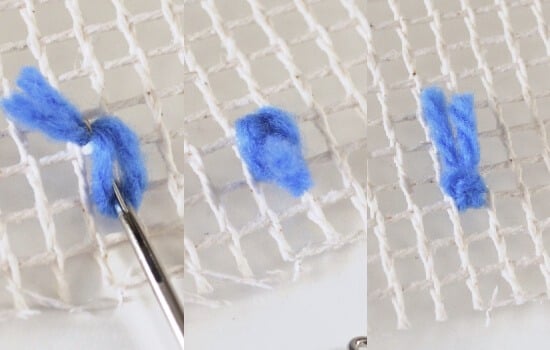 Hang on to the yarn and begin pulling the tool downward, back out of the canvas. The line from the canvas that runs across the tool will push the latch up and lock in the two ends of the yarn. Continue pulling and you’ll get a knot with the two ends sticking out. Use your fingers to tighten the knot (this makes the yarn look longer).

After you get going, you can pull the knots tighter and have to do less adjustment with your fingers as you go. For the sake of consistency I am tugging on every looped bit of yarn to make sure it is nice and tight.

And that is all there is to working on latch hook. It’s really, really easy and something that I’ve been doing for about 4 hours every evening the past 4-5 nights. You can easily watch TV while latch hooking as long as your pattern isn’t crazy involved.

For the most part I really don’t like the latch hook kits I’ve been finding at craft stores. This is why I decided to make my own pattern my first ever go of it (and I actually said that first night – why can’t I do things the easy way?) BUT, there are some neat vintage patterns that you can find online. I especially like these two on Etsy. And since you’re just buying a pattern rather than a kit, you can pick your own colors! 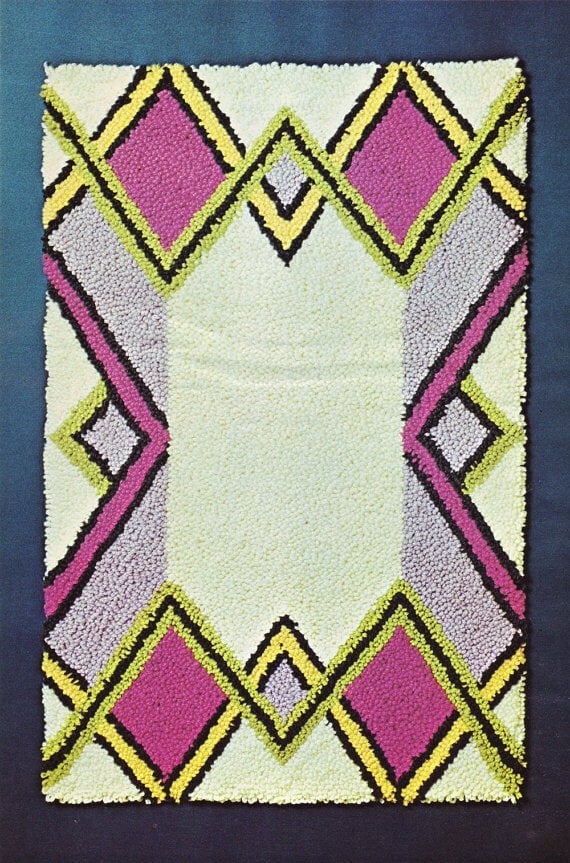 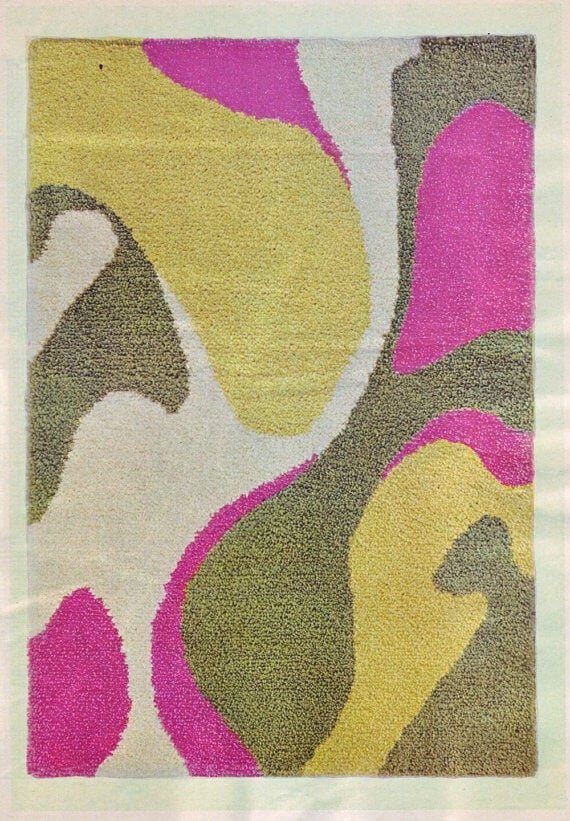 Or use the free pattern I made just for you :) Happy Friday – hope your weekend is fantastic!