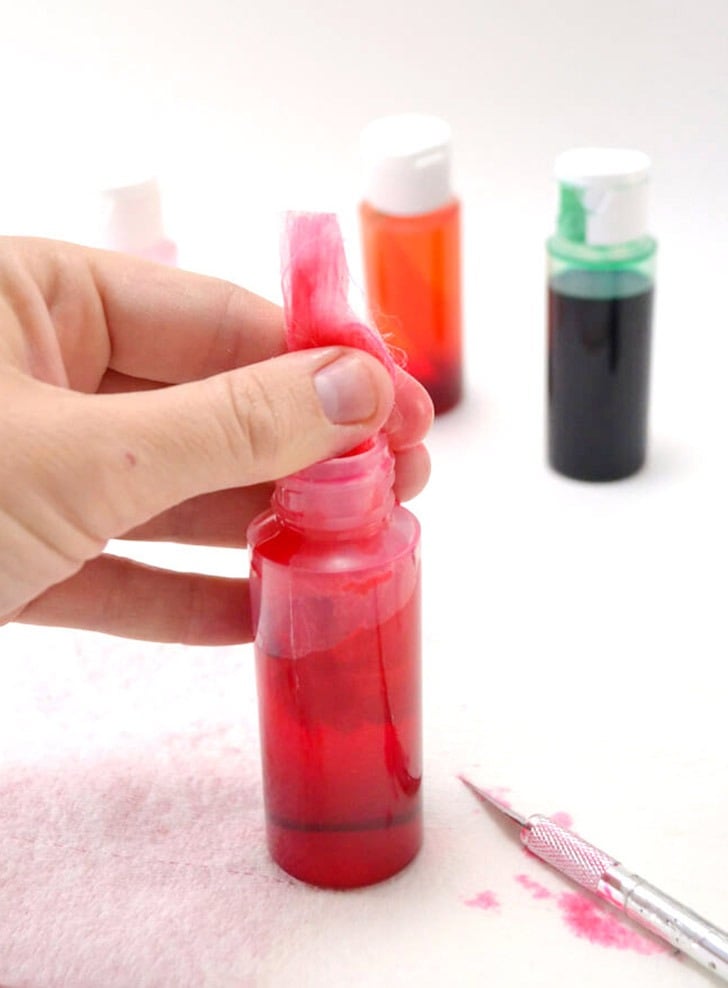 Alcohol inks can be really expensive. Luckily there is a DIY option for frugal crafters… Get in on these homemade alcohol inks, a super easy project that will save you money!

I have this thing where I am so cheap that I straight up will not buy an item I  need because I only have one discount coupon to use at the craft store. Instead of getting what I need at, GASP, full price, I’ll straight up sit on my hands and wait until the next time I head to town when I can use my coupon again.

Sometimes it’s a bit of a struggle. I’ll stand in that aisle for far too long, looking at the item I need and thinking about the cost, eventually looking to see if I can just order it right there from Amazon for a decent price and working out if it is better to A. wait and come back to the store. B. order it online and wait for delivery C. just pay the full darn price for the thing.

Sometimes, in these moments I realize how ridiculously overpriced an item is. And one day, a few years back, when I was doing my standing in the aisle looking far too intently on a little package of 3 bottles of alcohol ink thing with a regular price of $10, I decided to do the math. 3 bottles with half an ounce apiece inside of them for $10… That’s $6.67 per ounce of alcohol ink. I decided that that was freaking insanity, my friends. And these days, you’re going to pay closer to $13 for an even wilder $8.67 per ounce.

All of these numbers running through my head and really ticking me off, I did what I do when I don’t like how things are shaking out… I do the darn thing. Purchasing a 6 pack of 2-ounce plastic squeeze bottles for $4 and a package of the cheapest markers I could find at Target, I went home to make my own alcohol inks. As far as saving money goes, and stretching the budget, it makes a lot more sense to collect your old markers and use those instead of purchasing new ones.  In fact, when you think a marker is dried up, there’s still some ink in there just waiting to be juiced out and used. And since I first published this post back in 2015, I’ve made my own homemade alcohol inks a handful of times, now and I’ve realized that my favorite option is to use old Sharpies. They come in a lot of colors, are permanent and are nice and strong, which translates to a better DIY alcohol ink than the markers I used in this post.

In the years since this post has published, I’ve also gotten lots and lots of great feedback from readers who make their own alcohol ink, too. So far we have learned that dry erase markers leave gunk in the alcohol ink that needs to be strained and doesn’t work well so should be avoided. That washable markers (just like the ones in the photos below) will create a less potent alcohol ink.  You can use powdered pigment like Kool-aid and fabric dye if you strain the mixture prior to use, but know that isn’t an acid-free option.

These alcohol inks are best suited for use on paper because it is difficult to match the strong concentration you can get from storebought alcohol inks. Those do well on solid surfaces like plastic and glass, but oftentimes the homemade versions will dry much lighter than we’d like for these kinds of projects. And in those cases, I’d say if you have the stuff at home already to give making your own alcohol inks a go to try on a smooth surface, go for it. You won’t lose anything. But if you’re buying the supplies JUST to make the inks for such a project, your money is better spent on the storebought alcohol inks. These are the markers I used back in the day, and when many are used at once they can give you a nice pigment. But these days I’d suggest starting with something a little more potent. I swear used Sharpies are my fave, these days. No matter the brand of markers you wind up using, the basic concept is the same. Using your pliers squeeze the plastic outer housing of the marker, usually, at the end, there is a cap that is easy enough to remove. The goal is to release the ink cartridge thingie from inside of the marker. Slide the cartridge inside of your bottle or jar. Add you 91 or 99% isopropyl alcohol to your bottles or jars. The smaller the ratio of alcohol to ink the more concentrated your colors will be once the alcohol evaporates, FYI. If you’re in a rush, slicing open the ink cartridges helps the ink to drain into the alcohol much more quickly. But here’s a quick tip: DON’T do like I did and slice all the way down. Instead, make a cut in the middle leaving the top and bottom of the cartridge alone because as this thing soaks in the alcohol it’s going to puff out and it’s such a beat to get it back out of that little bitty hole in the bottle, if you’re using them This way of opening up the cartridges make it a lot easier to get these guys out of your ink later on down the line. See! The opened up cartridges start to disperse the ink into the alcohol super quickly. Allow your bottles filled with alcohol and cartridges to sit at least, the longer the better. Overnight is great. If you can do even longer you can get even more ink into your solution. Pop on a pair of gloves and remove the ink cartridge thingies from each bottle. See above, I slit that cartridge all the way down and getting it out of the bottle is kind of a pain. Ugh. What a pain in the royal derriere to remove. (remember to only slice those suckers in the middle!) Use your fingers to milk all of the ink and alcohol out of the canister. Gloves, people, I can’t stress them enough for this project :) Because milking the extra ink really does make a difference in the saturation of your finished alcohol inks, the effort is truly worth it. And if you don’t have gloves, well, teh color doesn’t last too much longer than a day, if you’re lucky! There we have our red alcohol ink! Now, these are my colors after using only 1 marker apiece. The color keeps getting more and more saturated with every marker I add and it’s fabulous. One marker really isn’t enough to make this much alcohol a viable replacement for commercially made alcohol inks. I tend to be happier with the concentration when using 3-4 markers, but play around to see what you like best.

Are you totally ready to raid the stash of your little’s old markers? I so bet you are! :)

Grab that old stuff, or buy some new ones if you’re really keen and I bet you’re going to love making your own alcohol inks. Before you go, did you know I had a craft book specifically for alcohol inks publish on January 10, 2017? It’s called “Crafting with Alcohol Inks” and you can snag your own copy at Amazon or Barnes and Noble!

This post has been updated from its original version published on November 3, 2015.

I'm a crafty cat lady with big dreams and an inability to sit still. I make it, I live it, I love it. Here at Dream a Little Bigger you'll find lots of inspiration for crafts, crochet, DIY, food, pet life and all things rainbow. Lots and lots of rainbows.
43.8K Shares
Pin43.4K
Share373
Tweet
This site uses cookies: Find out more.