Glitter Train for under your Tree 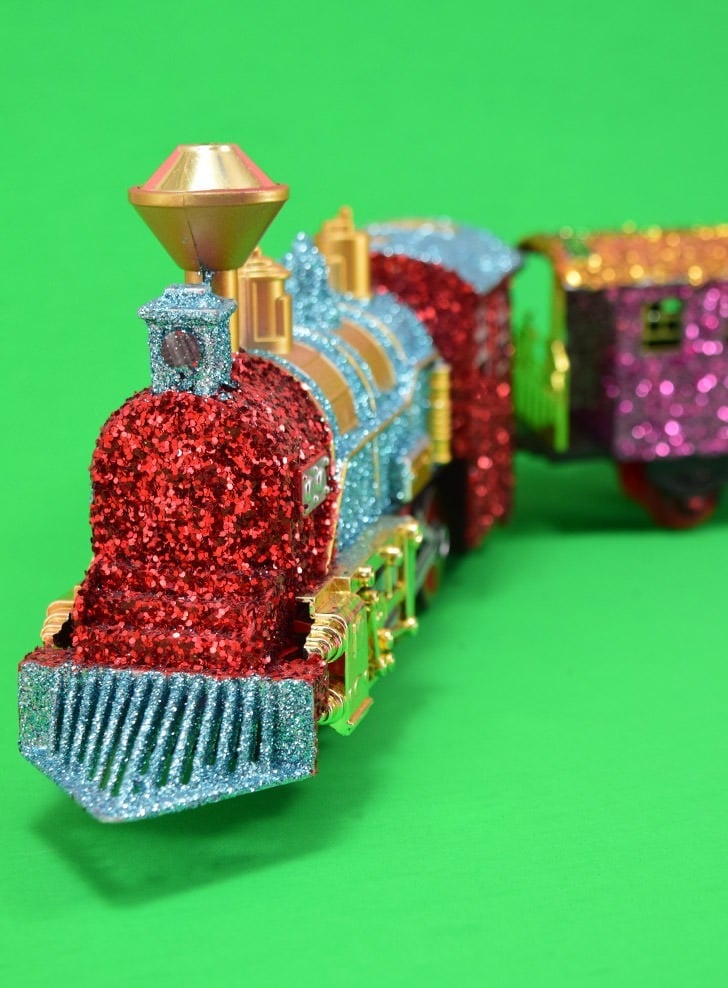 One of my biggest regrets is that I don’t get to play with glitter nearly as much as I would like to. I LOVE glitter. I know it’s tacky and garish and a total headache to deal with considering the mess it makes BUT once I’ve glittered something I always love it even more than I did before.

And so when I saw a picture of a Christmas tree with a sweet little train beneath it I thought “I want one!” and then I thought “I can do it better!” And so I ordered the cheapest toy train I could find on Amazon that actually has smoke come out of it (for real, it’s pretty darn neat) and when it arrived I raided my glitter stash and did what I do best… made it incredibly gaudy :)

As it turns out my train also makes sounds, which I can’t figure out how to turn off that make me feel insane. It also doesn’t help that Ollie (my dog) wants to kill it. And so I turn it on for only small amounts of time and I sit that and grin like a moron while my dog howls at the back door because I’m holding out on his inalienable rights to destroy tacky things that make irritating sounds. Is it really tacky, you might ask? And I think the answer to that is a resounding YES. But the thing is, tacky is totally okay at Christmas and, in fact, it’s kind of encouraged, isn’t it? :) 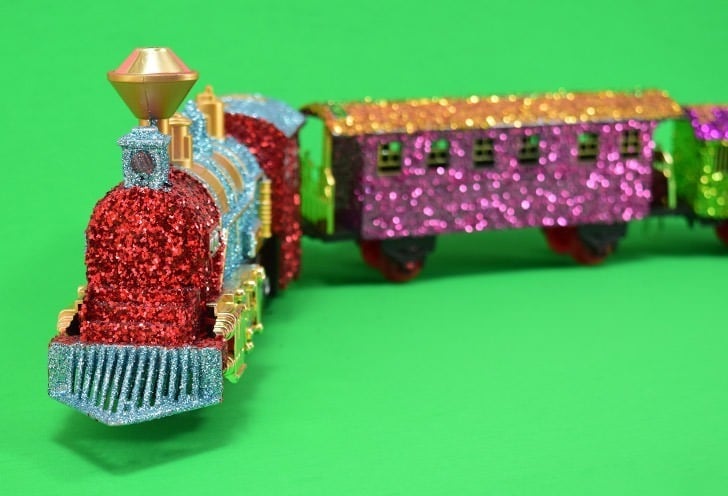 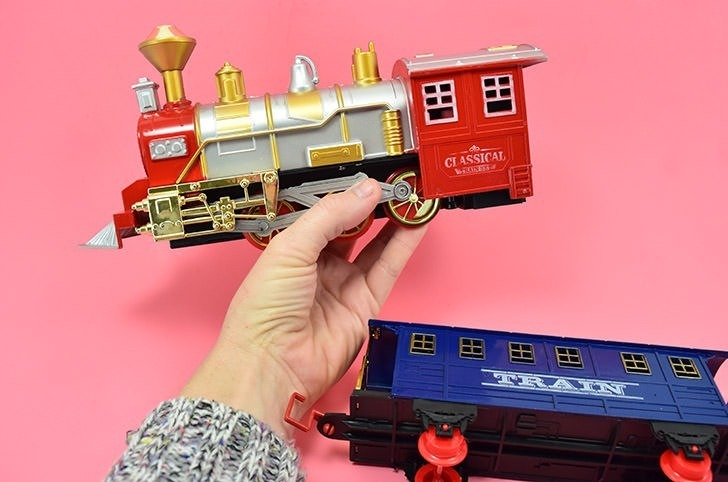 This is my train. See that big gold nose business on top at the front? That’s where the smoke comes out as it chugs along the track. In some of the reviews they say that it smells like a fire going but Rob and I cannot make any smell, good or bad, at all when this thing is running so it must not happen with every one. Now it does make “real train sounds” which I didn’t pay attention to because I was obsessed with finding a train that would smoke as it chuggachugged down the track. As such this guy doesn’t actually travel around the tree as much as I had figured it would, but it’s so cute just sitting beneath the tree all of time that I’m totally cool with it. 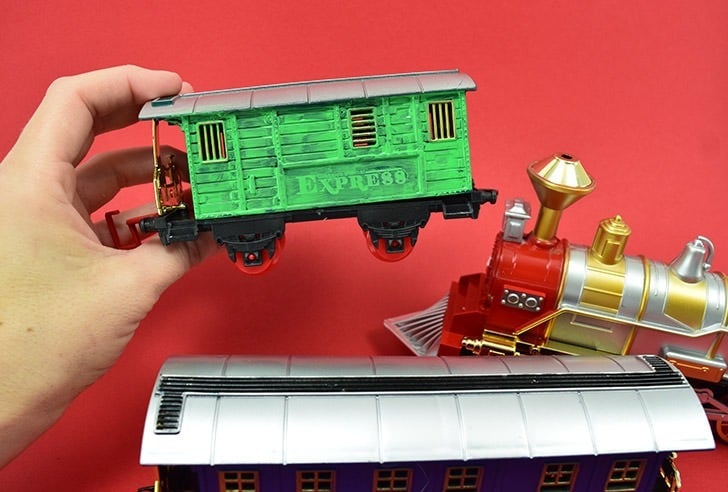 Now you can technically just glitter this train straight as it comes out of the box but I found that when I primed the plastic of it with acrylic paint or, even better, chalk paint, the glitter sticks so much better. I mean, I keep knocking this poor train all over this place and it did get carted off by a big ol’ dog TWICE and most of the glitter is still on it but in the primed areas it’s still glitzy as all get out. :)

So if you have the time and you already have craft acrylics or chalk paint anyway, I’d say give every part of the train you plan on glittering a quick prime with it. 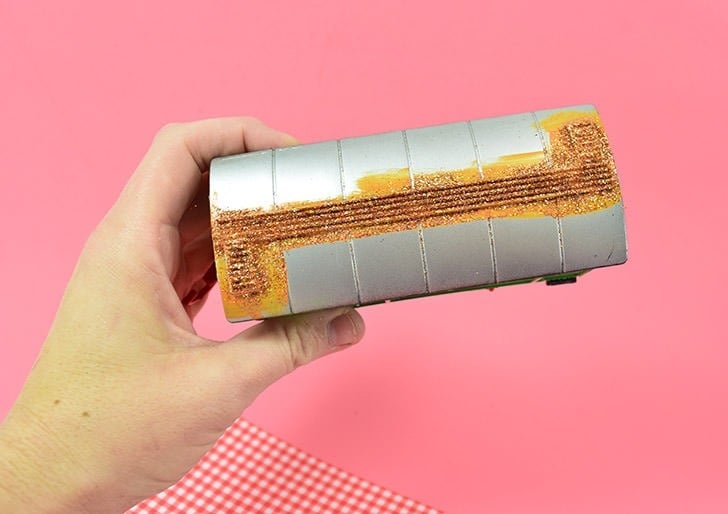 Getting down to the actual glittering, because there are some smaller details you might want to paint and glitter one area at a time. You’ll likely paint and glitter over your mistakes from the previous color and that worked out really well for me… 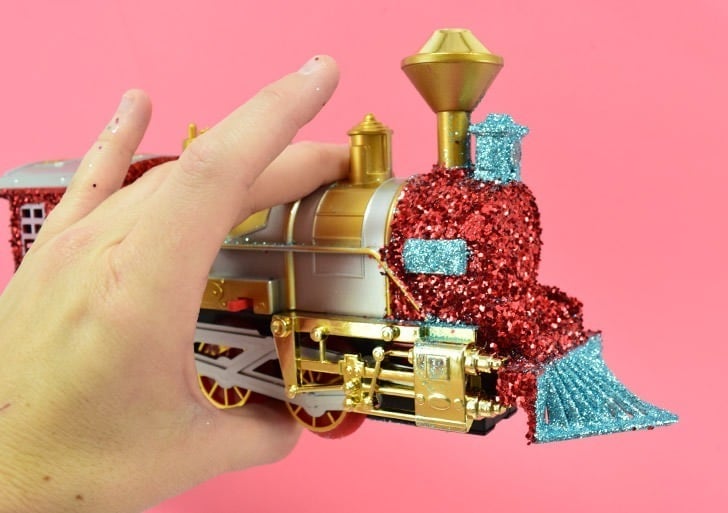 There are parts of the train I would recommend NOT attempting to glitter. On mine anything gold remained gold because that’s already glitzy. Plus some of it is really slick and even maybe metal which wouldn’t hold onto the glitter as well, anyway.

If you get this train that I did, there is also a light on the front that you’ll want to keep from covering so you get that fun feature. Others might have this, too, or even more so that’s a good thing to check before you go nuts with the glitter. You’ll also want to not get glitter into the working cogs of it all so refrain from covering the wheels and anything that actively moves while it works (test it on the track to be sure).

Now isn’t that just seriously adorable circling my presents under my tree? I love it SO MUCH! It’s not a difficult project but it’s the first glittered train I’ve ever seen making it a pretty awesomely unique one! 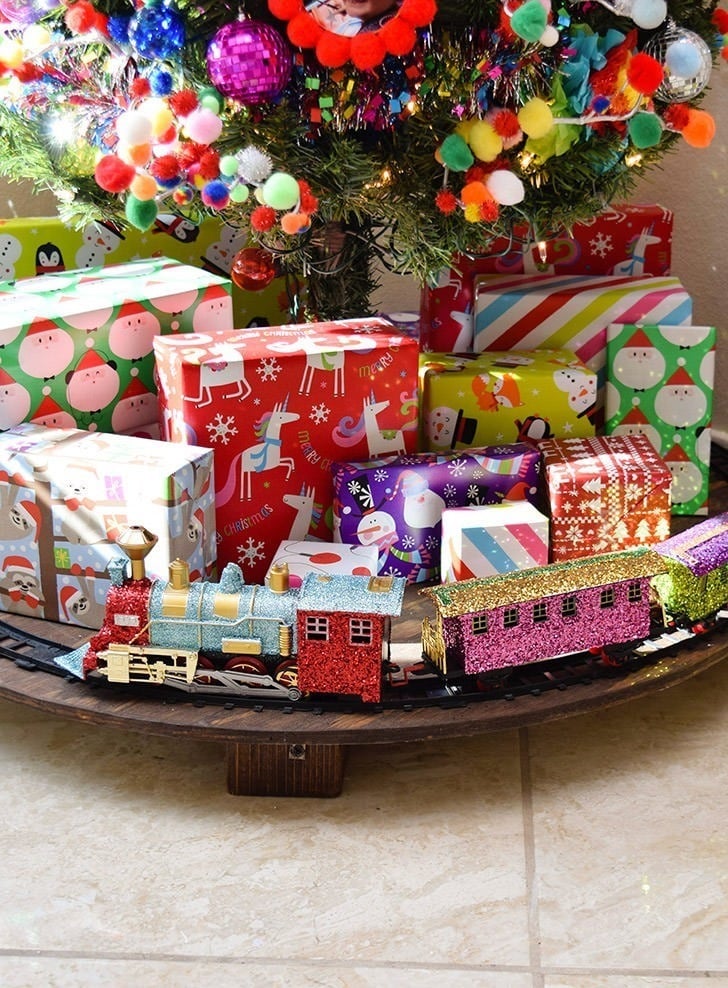