So I got  a pom pom maker a while back ago when my mom was in the hospital and I kind of sort of got addicted to making pompoms. I had, like, a TON of projects that I was working on with them including this pompom blanket. As it turns out Carly loves pom poms just as much as me, except she goes so far as to destroy them when she can get a hold of one. I have to tell you it makes her insanely happy but it frustrates the heck out of me!

So some of my projects got put to the back burner in hopes that little miss will grow out of her destructive phase and I don’t have come back from the bathroom to a pile of little pieces of yarn that had once been a bunch of beautiful pompoms strewn about the house like confetti. ‘Cause that business makes me sad and it’s a waste of good yarn. But Ollie loves pom poms too, but in a “I want to cuddle my face into ALL of the pompoms” kind of a way and he’s far too well behaved to tear anything up. Watching him cuddle up in them is pure sweetness, I gotta tell you. 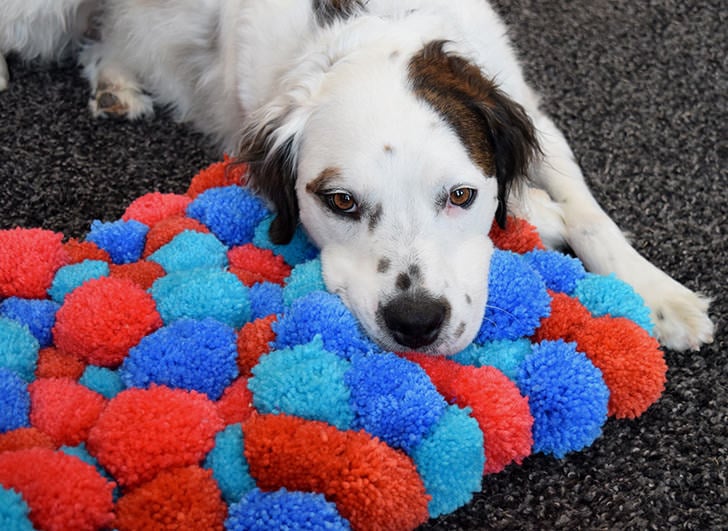 This pompom rug was actually the catalyst for purchasing a pompom maker in the first place. My mom broke her ankle going to a museum that I really, really wanted to go to. She was in there for about a week and had surgery. The whole mess was a nightmare. I felt so bad and wanted to kill time sitting in her hospital room and do something with my hands. A trip to the Walmart across the street sent me back to hang out on that tan vinyl couch whipping out pompoms to make  a rug that would be soft and SOOOO fluffy. I figure if I broke her ankle the least I can do is make her some fluff to dig her toes in once she can properly walk again.

First up you’ll need to learn how to make pompoms. Luckily I made a video a while back ago about how to use the Clover Pom Pom Maker.

I used Red Heart Super Saver yarn because it’s cost effective and they have lots of colors. It’s also easily found at stores like Walmart so you can pick some up while buying groceries or an umbrella or hemorrhoid cream or whatever you need to get and that’s dang convenient.

You’ll need to make up a whole MESS of pompoms. I made medium and large sized poms and the large don’t really use up that much more space than the mediums do as far as the rug goes. It mostly makes them seem taller. Nevertheless I’d totally recommend doing 2 different sizes to add some interesting texture to the design. 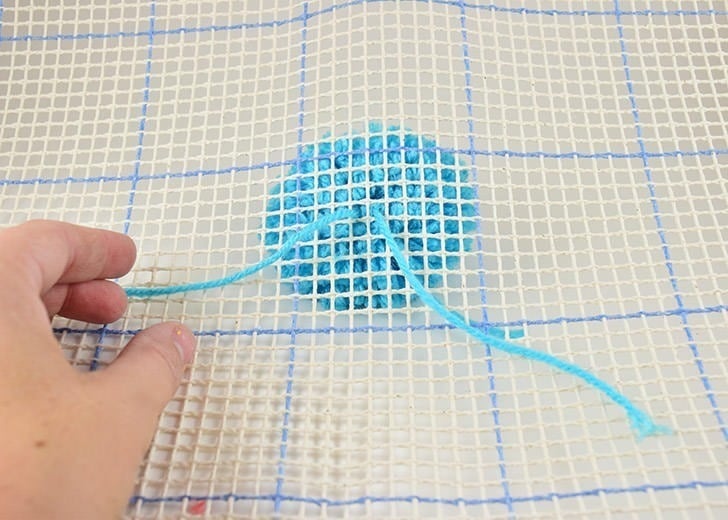 When making your pompoms do NOT cut off the tails you use to tie it together. These tails you’ll run through a rug canvas and tie them together in a knot several times over to secure. 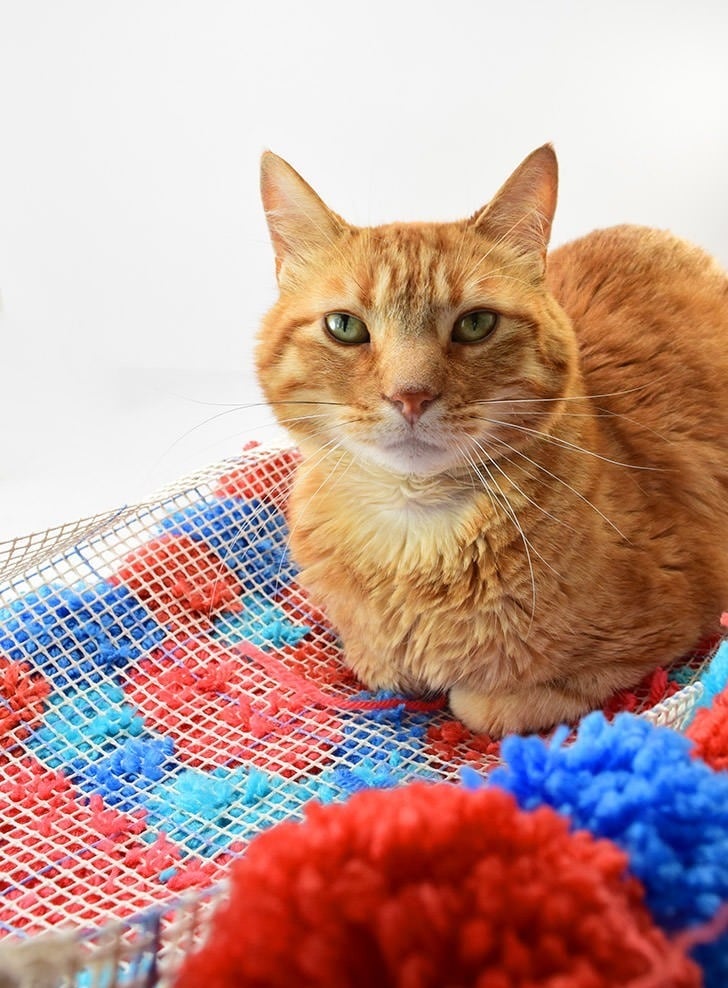 You can snip the tails once the pompom is secured well BUT after having a kitty pulling at the ties while I wasn’t around (these darn petses are totally sabotaging my pompom crafts – ha!) I learned that a quick dab of hot glue works wonders to really keep that pompom in place. It also helps to make the backside of the rug less slippery on smooth flooring.

When you get to the edges I’d recommend folding the canvas inward and tying the pompoms through the folded over edge. As it went I folded mine in later and then stitched them down and it’s not as attractive. But, hey, it’s the bottom so it’s no biggie in the end. 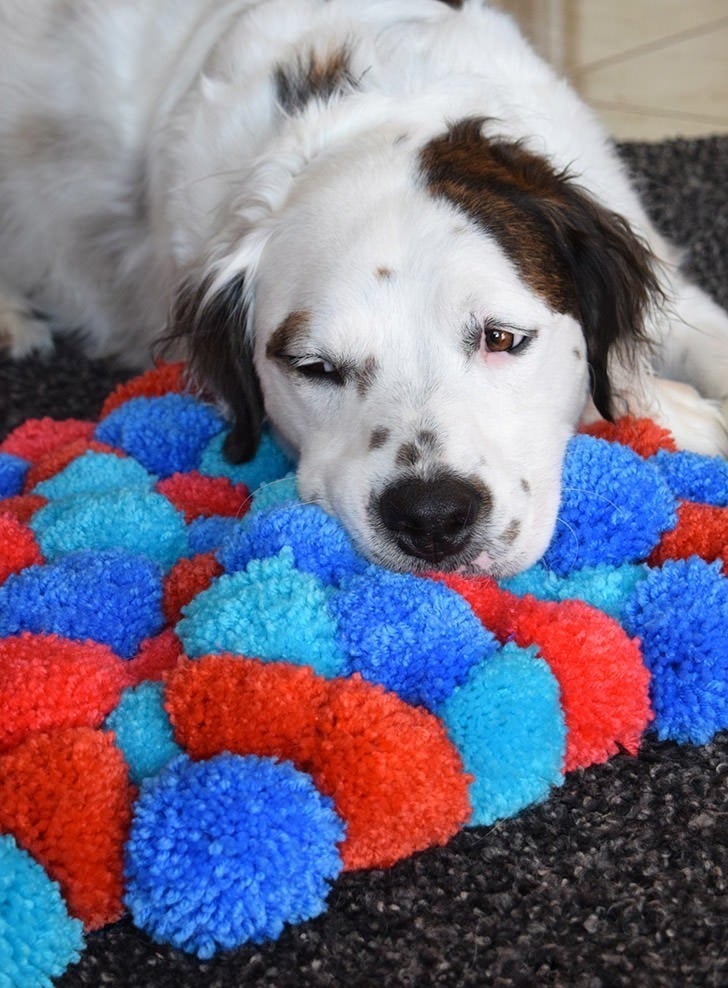 Now look at that business. It is literally SO fluffy and soft and wonderful. 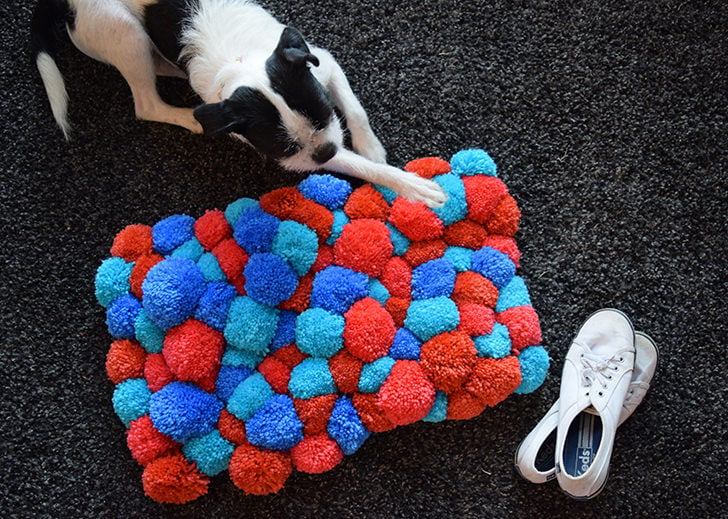 So far the consensus is that everybody loves it. Cats. Dogs. Humans. Everybody. And so far Miss Thing up there hasn’t tried to destroy it which is fabulous, but since it isn’t mine it only came out for pictures and quickly was tucked back away until I can get it to my Momma.

This is a great project because you can make the pompoms with the TV going and then you can do the same while tying it together. It’s stupid easy, really inexpensive and so unique an fun that there is no way you won’t get tons and tons of compliments on it! 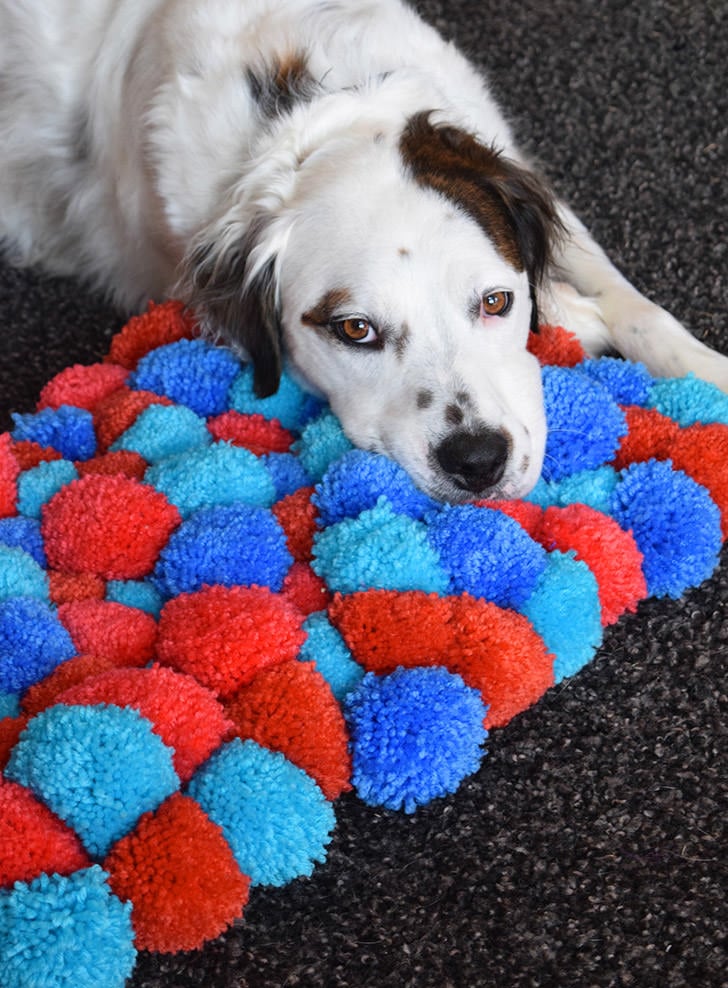