This DIY mime costume is super simple and uses items you probably already have in your closet! It’s great for last minute and totally work appropriate!

Take a sneak peek at the pic below. I mean can you even with that? In the 90’s EVERYBODY wore overalls. You’d very rarely wear both straps actually over your shoulders, the second would hang behind you and getting tangled up in your backpack that also was worn using only a single strap. Apparently, Will Smith was a fan and he was the Fresh Prince of Belair so you KNOW it was cool. Heck, dude even has a belt on, too. Talk about overall accessory perfect, right? Haha! :) 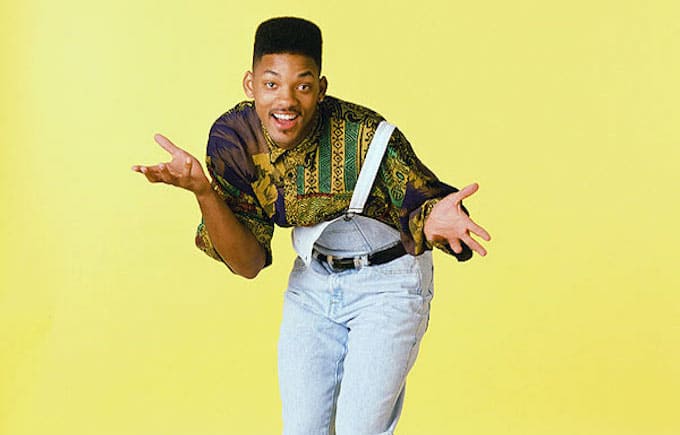 A few weeks ago I realized I haven’t had a pair of black jeans since, also the 90’s and I decided that I really, really wanted a pair. No. Not want. NEED. I NEEDED a pair of black jeans. And when I saw a pair of ankle length jeans that weren’t just black, but a nice washed black I bought them and decided that I’d somehow work them into a Halloween costume here for the old blog so I could justify the expense to myself ’cause I’m cheap. Nevermind that I actually NEEDED a pair or 2 of jeans because I had already started putting on my winter weight even though it wasn’t even technically Autumn yet. (what?!?) I can make myself feel guilty about ANYTHING, btw, it’s like my super-power :)

But, as you might have noticed, I did NOT wear my new black jeans in my homemade mime costume. And that’s because as I was getting dressed in my closet, getting ready to snap pics in my guest room with my pups as my audience sacked out on the guest bed, I saw them hanging up behind my dresses and I just knew that this costume HAD to use my oversized black overalls. It’s kind of amazing that these guys got lost in the back of my business, especially since I recently had a MASSIVE clean where I boxed up my now too small clothes and stacked them in the garage, basically knocking my wardrobe down to less than a quarter of what it had been hours before the undertaking.

I’m not even playing when I say that these overalls are some of my favorite things in the entire world. They are loose and comfy and are nice enough to run around town in (and you will get, like, a bazillion compliments on them, too) and they’re perfectly suited for sitting around the house, too. In fact, after I snapped my pics I washed my face paint off and then kept my outfit on because I was comfy AF. Not bad for a Halloween costume, right? 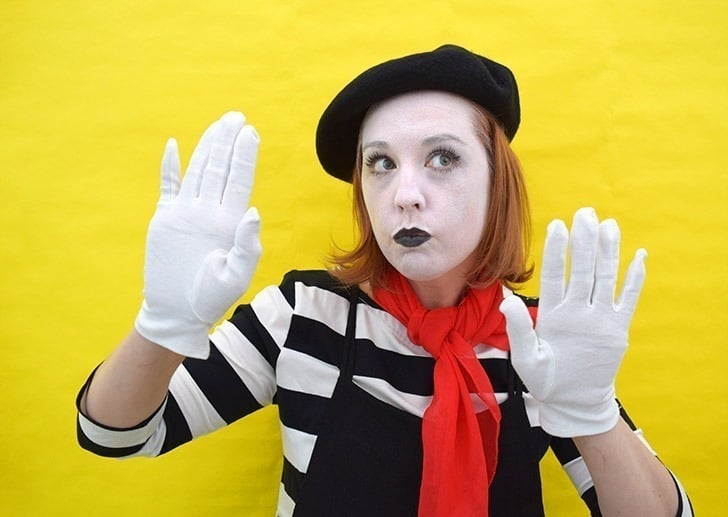 As I was going through everything out of my closet I used to put together my mime costume I realized that I purchased EVERYTHING minus the face paint off of Amazon. So if you don’t have this stuff in your closet to raid, you can get it all in a one-stop-online-shop. Convenient, right? :)

One of the things about this costume is the fact that I SUCK at makeup. Like I’m not good at it at all and so in everyday life, I wear the bare minimum. After googling ‘mime makeup’ and seeing all of the amazing things people had done, I decided I was gonna keep this business simple. Yeah, I did try to draw neat symbols on my eyes and stuff and that business straight did NOT work out. The quality of my face paint SUCKED and that didn’t help matters at all. I had purchased this white face paint from Michael’s called Snazaroo and I even paid FULL PRICE of, like $10 for the stuff, and it was dried out and didn’t want to go on my face at all. Like, I had to mix it with facial moisturizer because I couldn’t even get it to wipe on my fingers straight from the little pot. What a waste of money!  I will admit that, surprisingly, it got decent reviews on Amazon, but I linked to another in my supplies list that has even better ones so hopefully you don’t have this same problem.

After confirming that face paint ain’t my thing, I decided to apply a thin coat of white paint to my entire face and then taking a page from Tammy Faye, triple up on the mascara on my top lashes, add it to my most often bare bottom lashes. A full black lip finished up my look and, I’ve got to say, I was more than happy with it. Nobody’s going to be making a Youtube video for how to recreate the look or anything, but it gets the job done, right? :)

How to Put Together a Seriously Simple French Mime Costume 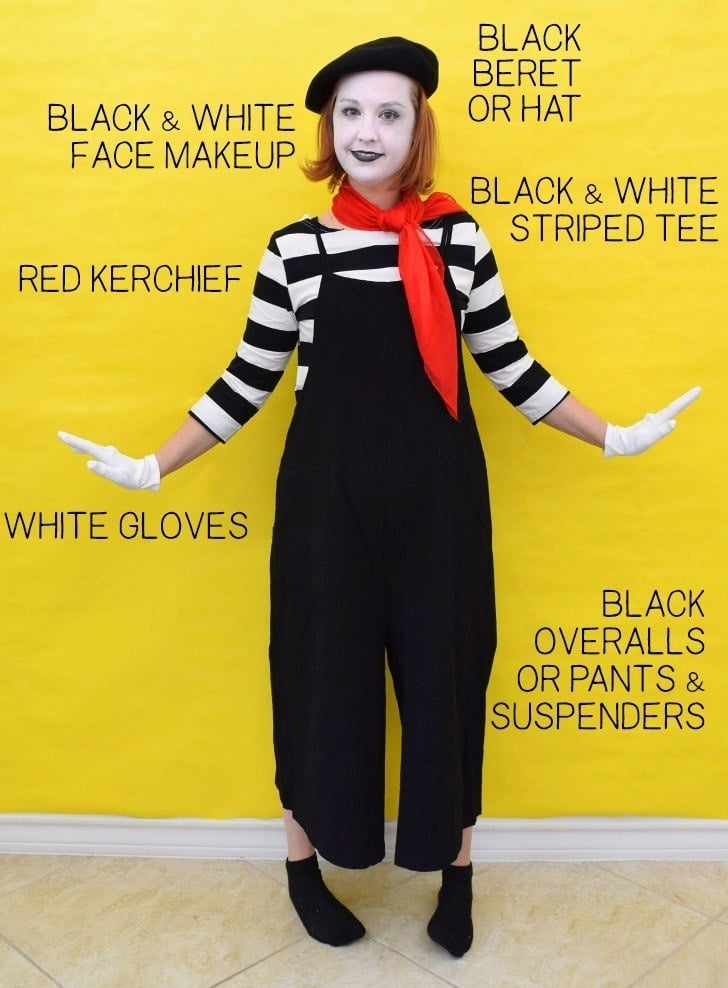 For this DIY mime costume raid your closet for: 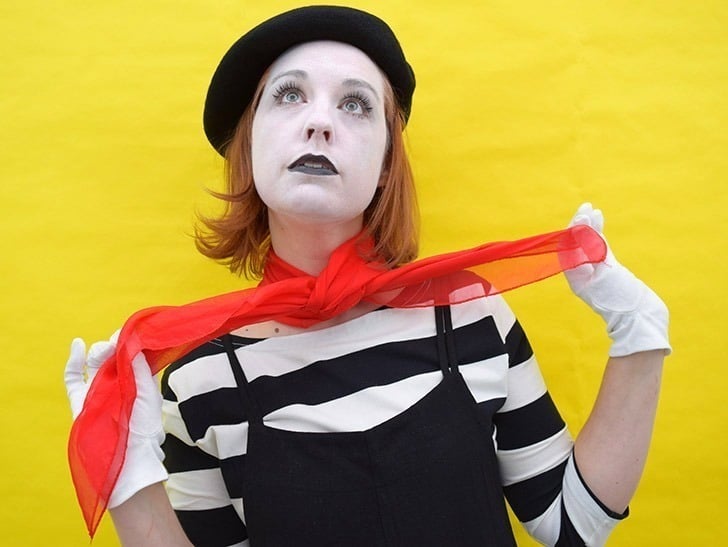 Now if you don’t have a beret, use any black hat you have. Heck, a beanie will work just fine. If you don’t have a red kerchief or scarf, you can snag a solid bandanna at Walmart for a buck, or you might even be able to raid your fabric scrap stash if you’re lucky. I actually purchased a 50’s costume accessory set from Amazon because I. wanted. those. sunglasses. And it was only a few bucks more to get lots of stuff AND the chiffon kerchief so I said to heck with it. Seriously, check out these cat eye sunnies. SO CUTE.

You can raid your winter wardrobe for white gloves or you can buy some online for pretty cheap. They aren’t strictly necessary, I suppose but I thought they were a cute addition. 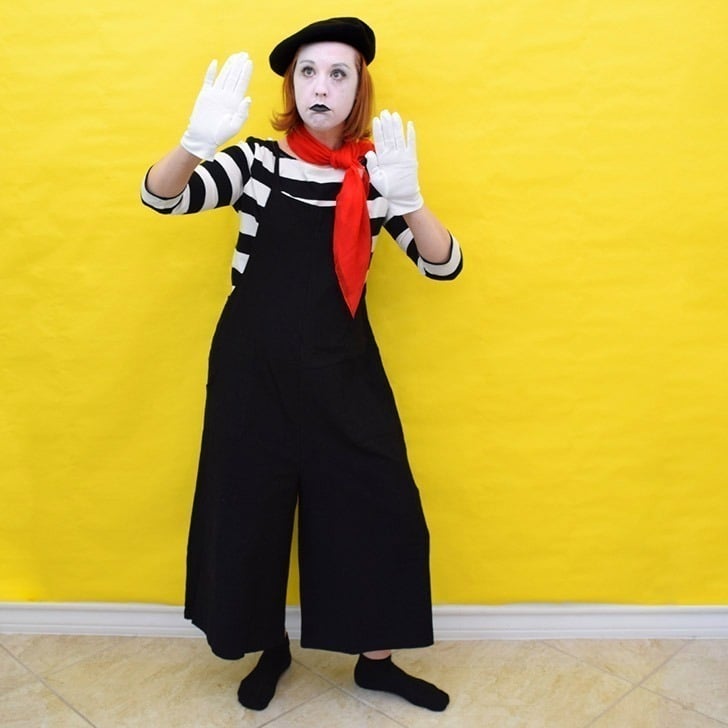 Everything tossed together (and no, I’m not wearing shoes because I was in my guest room and didn’t even think about it :) makes a pretty darn cute costume, right? You probably won’t be using the gloves often but the kerchief is cute to tie up your hair and that shirt is adorable with black jeans :) and those overalls will get regular use in just about any wardrobe so if you don’t already have this stuff, it’s not just a crazy Halloween purchase, like say, this awesome poodle party mask I can’t even buy because I’m allergic to latex, that will set you back a couple of tenners and won’t see the light of day again. Throw your hands up, make a confused face and pretend like they’re s a pane of glass nobody can see, but you can’t get through and this costume is a wrap! 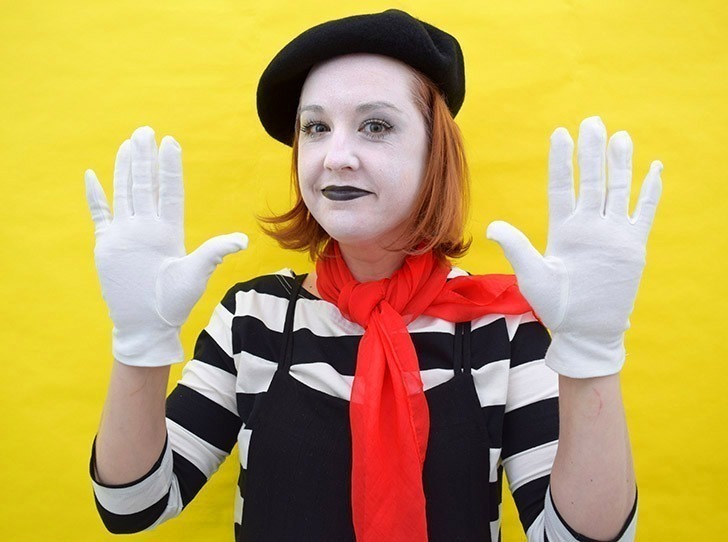