You can make these adorable chocolate Valentine bark hearts with little money and effort. Such a cute way to say “I’d be nuts to break your heart!” 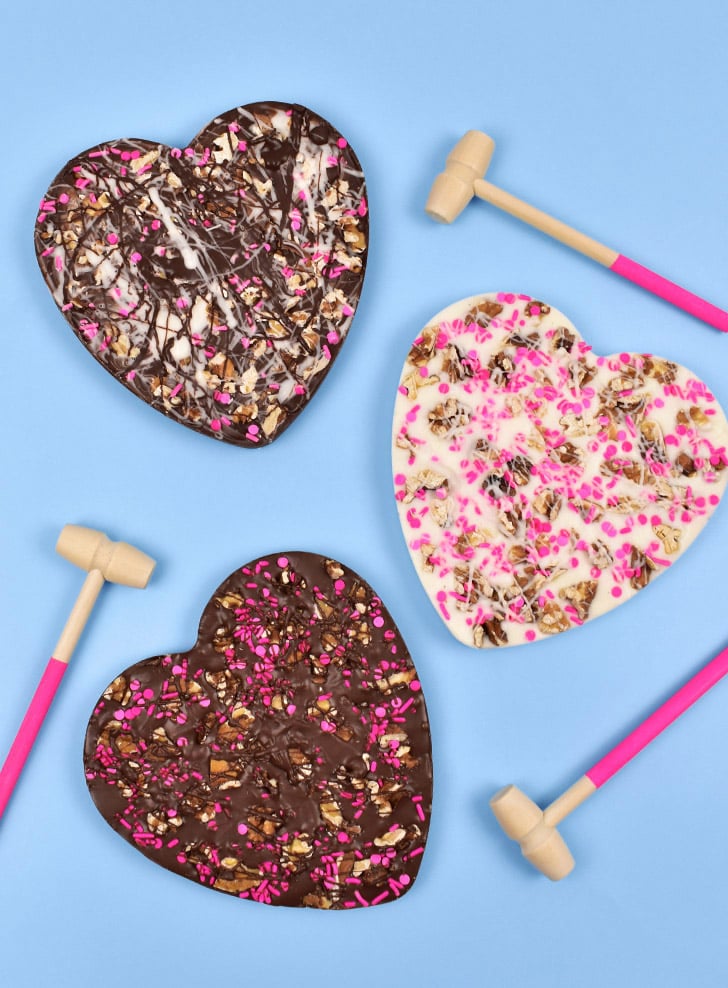 Back in 2016 I got the idea that I wanted to make chocolate bark hearts with cute little crab mallets as Valentine’s Day gifts. So you could, you know, smack the heck out of the chocolate with the adorable little mallet and break the heart. What I didn’t think about, however, was the statement you’d make… That hearts are meant to be broken. But I loved the idea in a way I couldn’t explain so I just went with it.

This year as I was mashing up bananas for banana bread it hit me. Add nuts and Boom! “I’d be nuts to break your heart!” Wouldn’t you know in a year that I’m actually single I’d come up with a better on brand Valentine :) And to randomly think about this while mashing bananas of all things :) 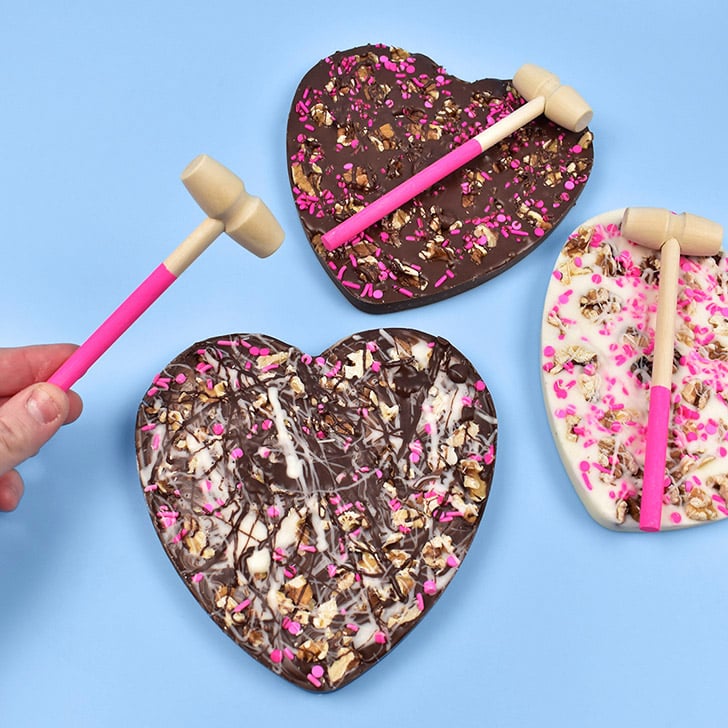 Since I couldn’t find any of the old ones, I ordered a new set of crab mallets. But as soon as I opened the package of mallets I realized my mistake. These were the dinkiest darn things ever. What the heck? The ones originally linked in this post back in ’16 now cost about $15 apiece, darn pandemic! But it looks like these crab mallets are a decent size for a decent price… a little bit bigger than mine in the photos with a cost of about $8 for 3 mallets. Though I haven’t purchased these I think they would work better than what I used. (If you try them let us know how it went!)

Ready to make a sweet and on brand Valentine’s Day gift? 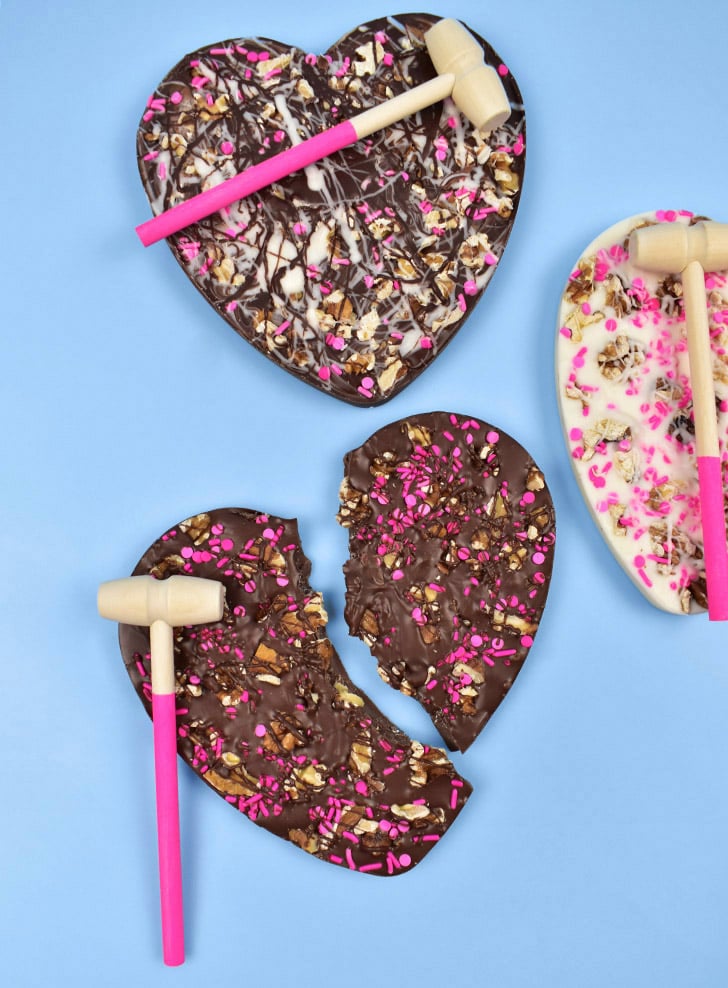 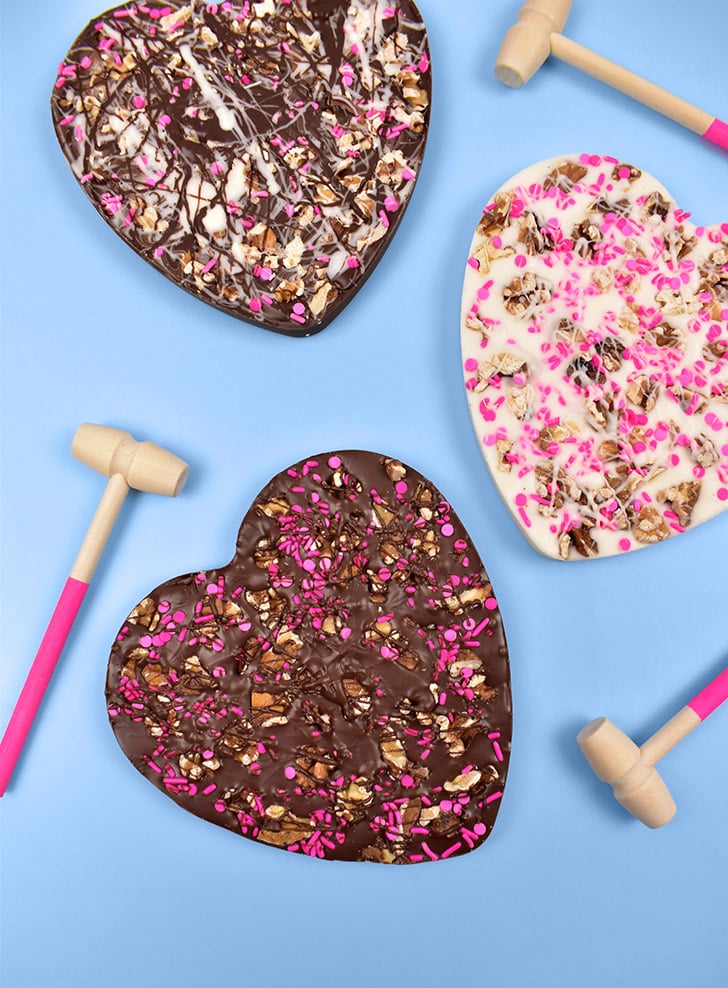 In the ingredient list above I am linking to Amazon where you can see what it is you’re looking for at the store BUT… buy this stuff at Walmart or the grocery store. You can get a package of almond bark for a little over $3. Or you can buy the same thing on Amazon for a whopping $9 a package.

When it comes to the easiest possible chocolate to use for bark, almond bark is going to win every time. Is it really chocolate? Nope. Does it taste like chocolate? Kind of. But when you’re tossing a bunch of other stuff like nuts and sprinkles, well, it’s good enough!

Honestly, though… I use almond bark because

A. you don’t have to temper it. I kind of do out of habit but you’ll get a nice and glossy finish without the work of properly tempering chocolate.

B. It’s cheap… like 13 cents an ounce cheap. And if you’re making bark for several, you can give them a nice, big 6″ heart of chocolate bark for a very reasonable price. 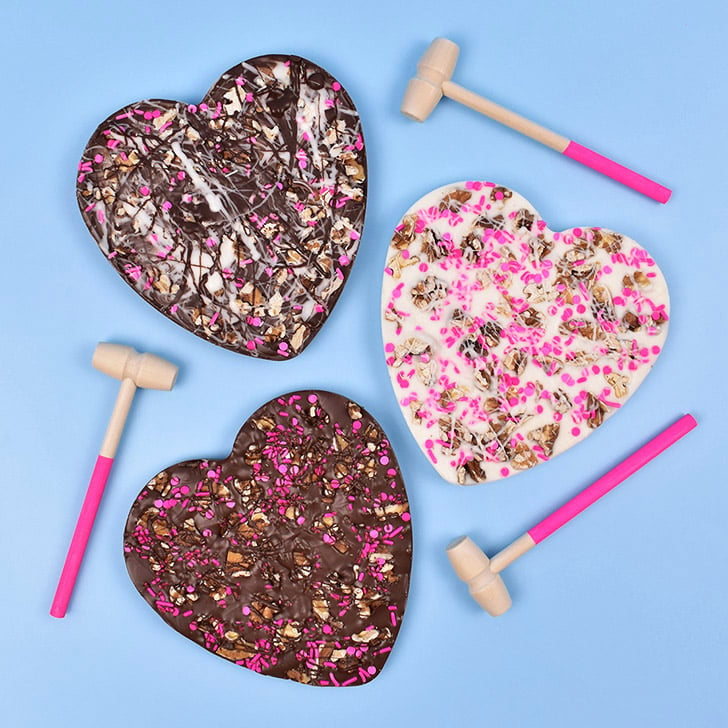 But I don’t like the chocolate almond bark as is. It’s too dark and it tastes “thin” to me. I don’t know what that means but it just isn’t right. Clockwise from the top in the image above you there is a heart made from straight chocolate, then straight vanilla, and lastly chocolate and vanilla combined. I dislike how dark the straight chocolate is so much that I wound up slinging white chocolate over the top because it very honestly doesn’t look like “real” chocolate to me. In the pic it kind of looks like dark chocolate, but in real life it just looks and tastes a little off to me… So I suggest mixing the vanilla and chocolate almond bark either 50% of each or pretty close to it. 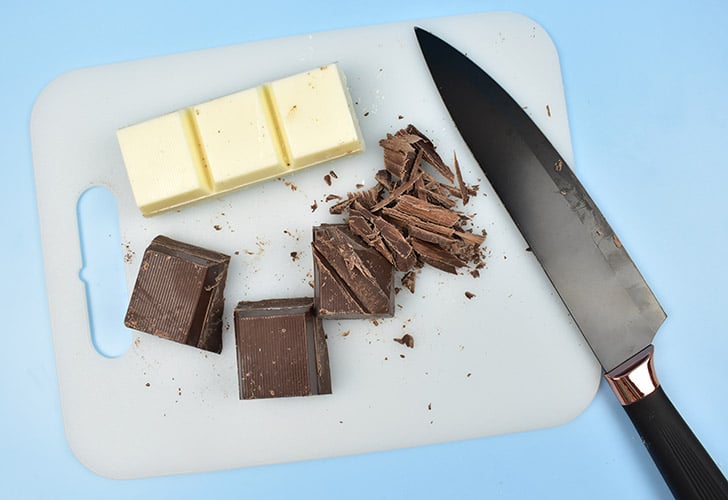 To fill the heart-shaped mold I used you’ll need 5 squares of chocolate bark to fill it. Yes, I notice there are six squares up there. I promise that I put back one of the white squares! 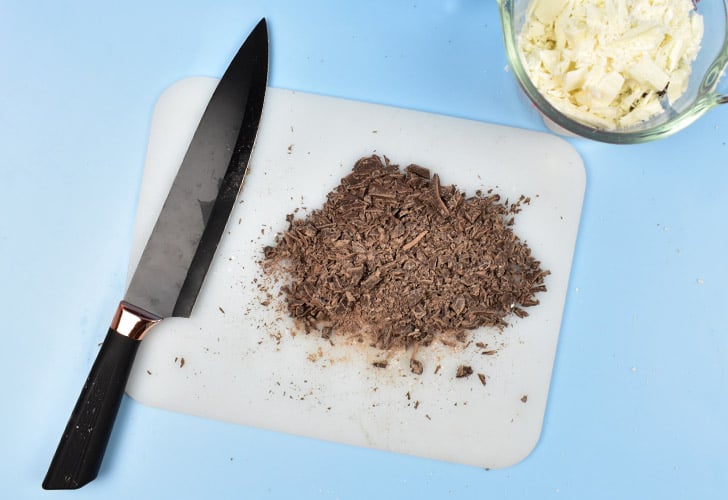 Chop your almond bark up into small pieces. Set aside one square worth of almond bark and transfer the other 4 squares to your glass measuring cup. 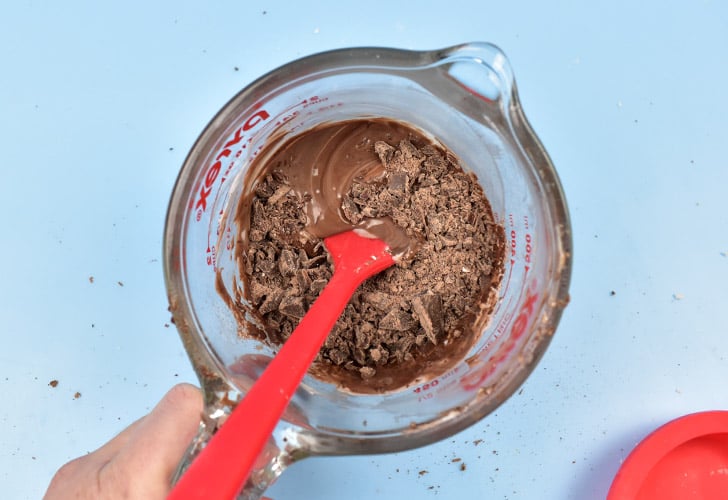 Microwave the chocolate in the measuring cup in 30 second intervals until it’s mostly melted (some chunks are fine). Toss the final square of chopped almond bark into the measuring cup and stir until the residual heat melts it until smooth.

*Quick Tip – Hot glass is hot. Be careful when handling the melted chocolate and the hot measuring cup. 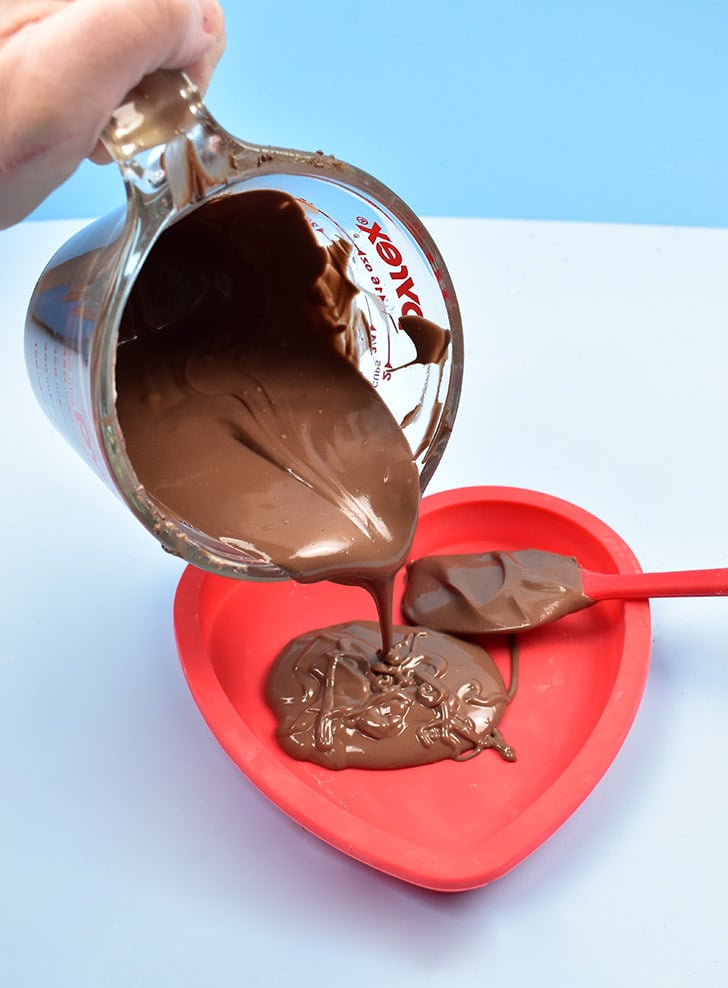 Pour the melted chocolate directly into the silicone mold. Tap on your work surface to smooth and level the melted bark. 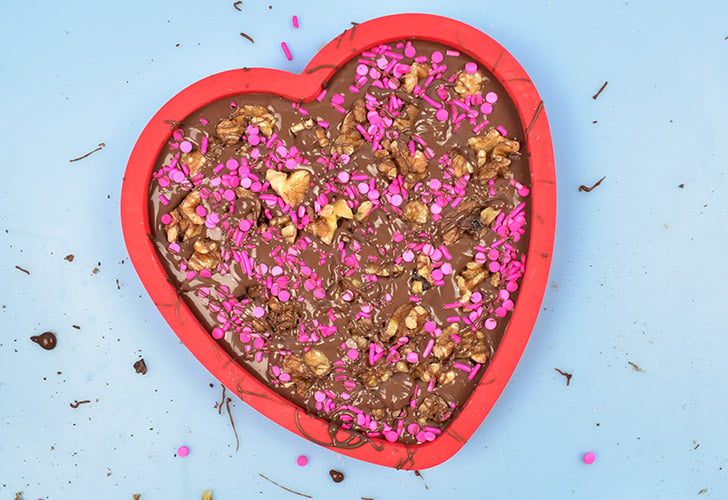 While still melted, add your nuts, sprinkles, and other mix-ins, pushing the larger items, like the nuts down into the chocolate. Sling around your spoon or spatula with the dregs of melted chocolate from the measuring cup over the nuts and sprinkles. 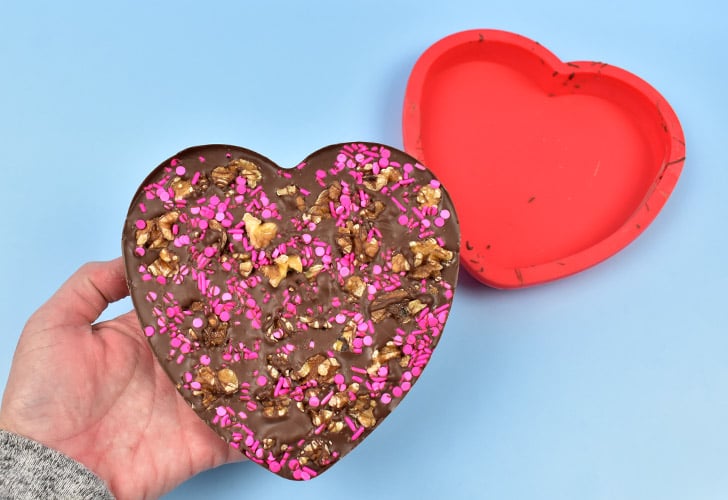 Place the mold on a flat surface and allow the Valentine chocolate bark time to set up. When the bottom of the mold is cool to the touch, gently peel the mold away from the chocolate bark heart. Clean up any rough edges with a sharp knife. 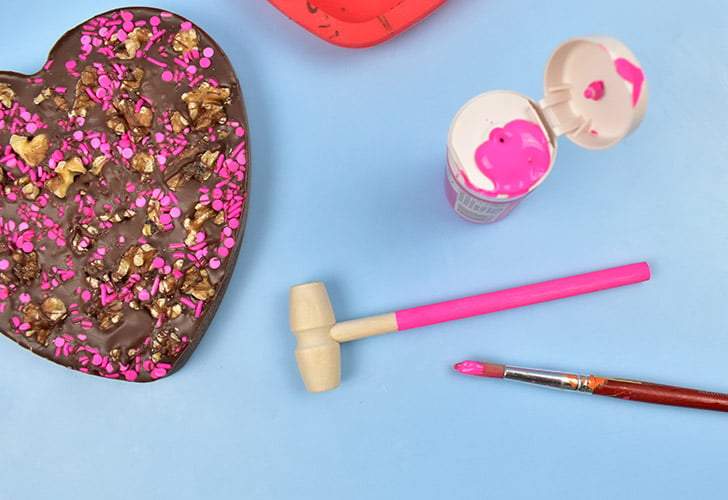 Paint or decorate your crab mallets to match the bark keeping the head free of any paint. Also at Walmart you can buy packages of 3 white treat boxes with windows that are the perfect size. They are deep, however, so I’d fill the bottom with shredded paper. I have misplaced my boxes and so I have not packaged mine up. I’ll just be slinging them at people, I suppose :) But I promise packaged up in little boxes they are SUPER cute! When selecting boxes make sure that your crab mallet can fit (it can go in diagonally to fit in a smaller box).

What a sweet little gift, right?

If you’re looking for something fun to pair this chocolate Valentine bark with, check out our Chocolate Scented Truffle Soaps!