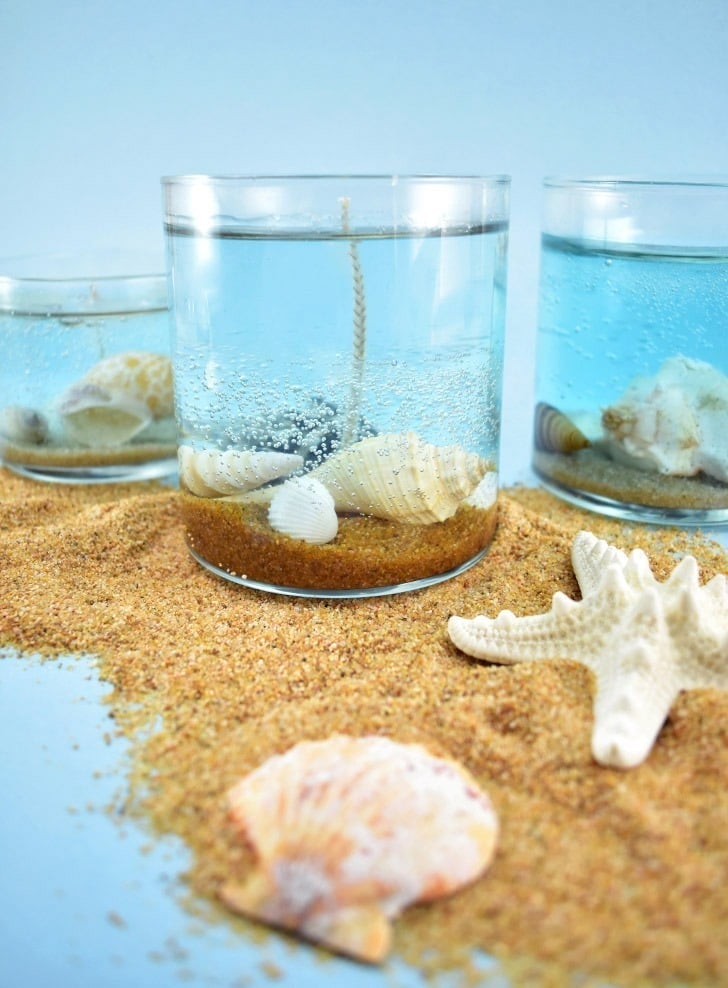 So with this whole seashell crafting kick I’ve been on lately one of the things I really, really wanted to make was some gel wax candles with shells and sand embedded on the bottom to look like the sea floor. Like underwater seashells, right? And I went at this like I do everything… full on gusto. I got my seashells and sand together and then I headed to the local craft store to grab jars, wicks and gel candle wax.

Supplies in hand I figured this would be a hole-in-one type of a thing straight from the onset. But dude, it was anything but! 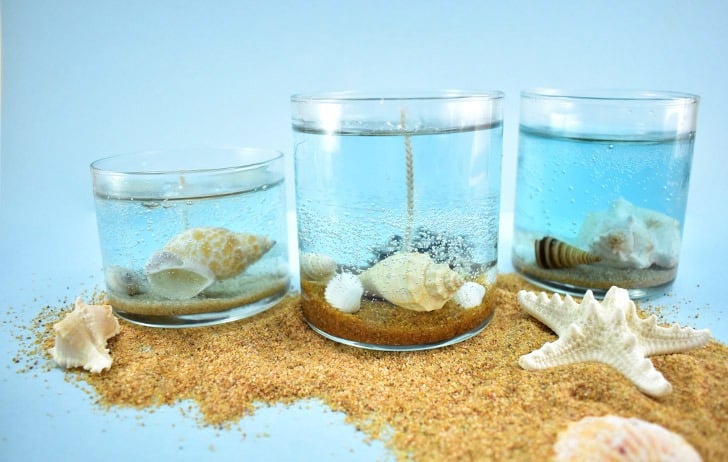 At the end of the day or about 4 days, really, I finally got 2 decent pours. But wait? Aren’t there 3 candles right there? Yep. But if you look closely that last one is missing the wick!

My mom could totally tell how bummed I was about this whole fiasco and insisted that all of the candles I had made were very lovely and that she thought that it was a total success. And in my funky mood, I responded “great! You can have them! They cost me only $60 to make!” 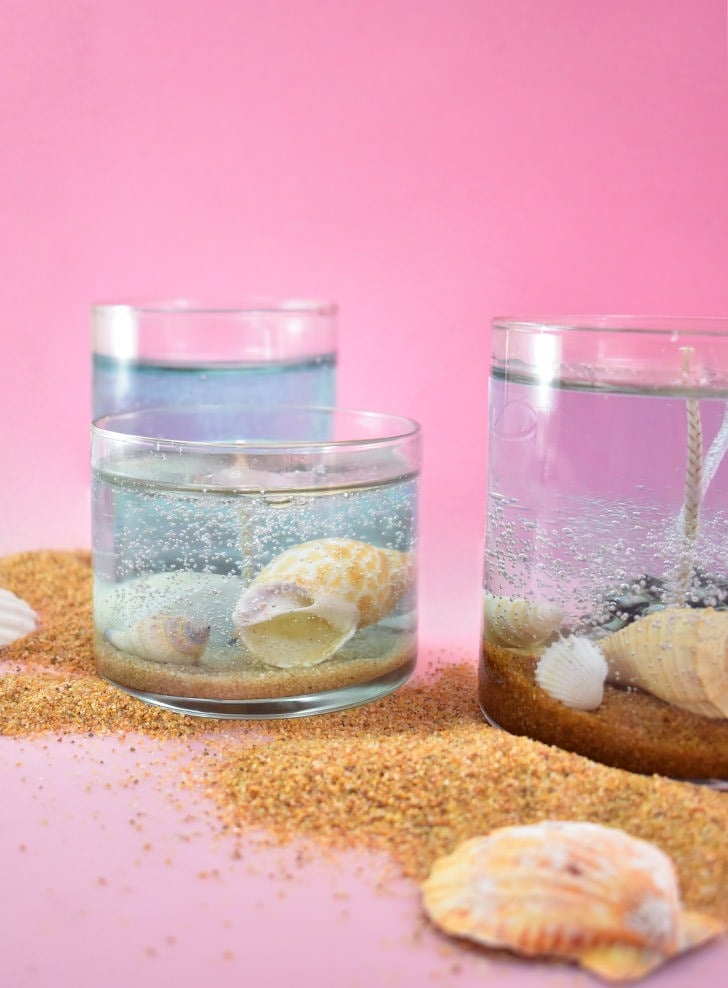 Now, I know what you’re thinking.. why in the world would you want to spend that kind of money to make candles, even if they are using treasured beach vacation finds in them? Well, you wouldn’t. You’d have to be nuts to be all about making 2 decent candles for only $30 apiece, right? The good news is, I made my candles 8 times over and I learned A LOT about making gel wax candles. And so my crafty misfortune just means I’ve worked out a lot of the problems you might encounter when you make your seashell candles. And since this is sort of my job, you know crafting out the kinks, well, it’s all just in a days work, right? :)

So if you’ve got a beach vacation coming up, grab a bottle and fill it up with a bit of sand and, maybe even knock out a crochet seashell collecting bag to bring home some treasures, because you WILL want to make these amazing underwater seashell candles when you get home! 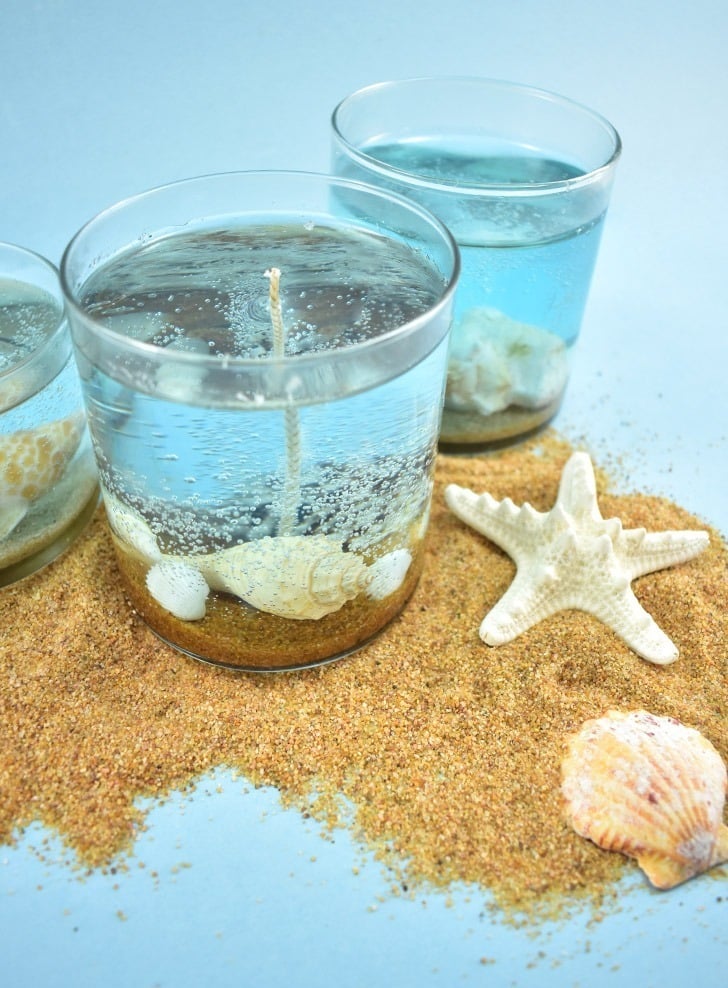 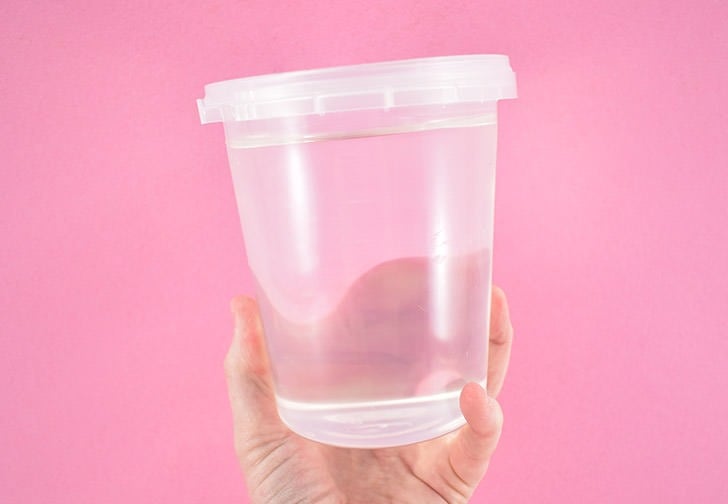 So this is gel wax. I used 3 different types. The first from Michael’s (was okay-ish) the next from Hobby Lobby (was better but not great) and then final gel wax I used was from Amazon. It’s called Gelly Wax. and I can’t quite describe why I like it best, I just do. Maybe it bubbles up less? 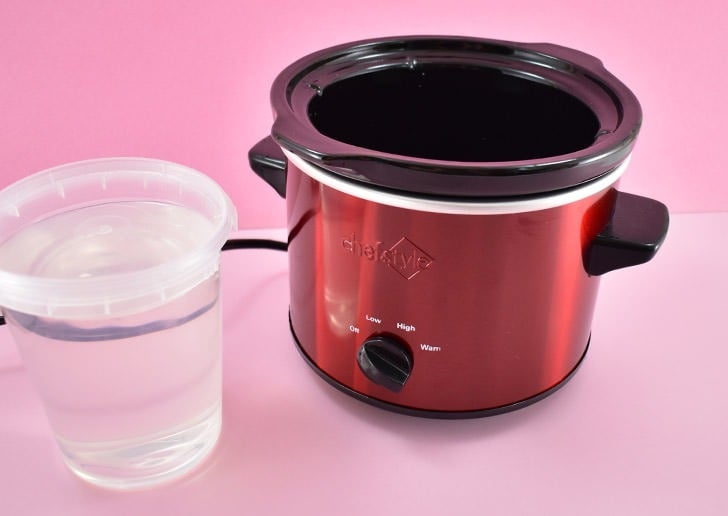 Now the first mistake I made was I had assumed I could heat gel wax in the microwave, just as I do other kinds of wax. But that is NOT how this works. Since I gave up all of my pots and pans prior to my move I headed to the grocery store to get something small and inexpensive that I could use for crafts from here on out. But the thing is, I couldn’t find a flippin’ pot there to save my life! But I did find a small crockpot, something I’ve had in my Amazon cart for ages to get to craft with but always click on “save for later”. Now I have the one I have out of urgency (because when a crafty gal wants to make candles she wants to make the NOW! ;) but I wouldn’t recommend it. First of all, it’s 2-quart and it’s just a smidge too big. Secondly, the crock insert is black and it makes it super difficult to see anything going on inside of it. Is everything melted? I think? Did I add enough color? Maybe? Maybe not? 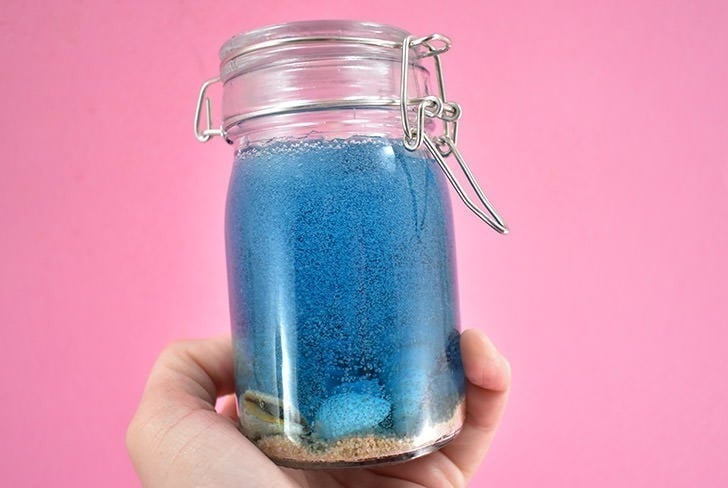 And you’re just learned why not being able to easily see how much color you’ve added is a BAD thing. p.s. when adding colorants be sure to add just a tiny, tiny amount because a little bit changes the shade of the clear gel wax A LOT. 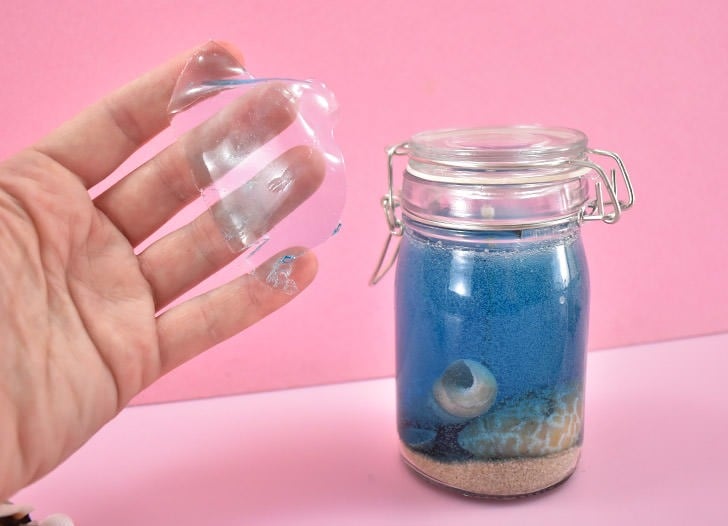 But the thing is, even if I did have a white pot I probably would have seen how much color I had added to my gel wax and thought, that still isn’t quite enough. But when you’ve got a whole mass of this stuff, the color gets more prominent. See the first draft tester candle I made there on the right? The little amount of gel wax in my hand is what was left behind in the crock pot after my pour. Would you have thought that would have been so dark that you couldn’t really see it? Me freaking neither. A little bit of colorant goes a LONG WAY. 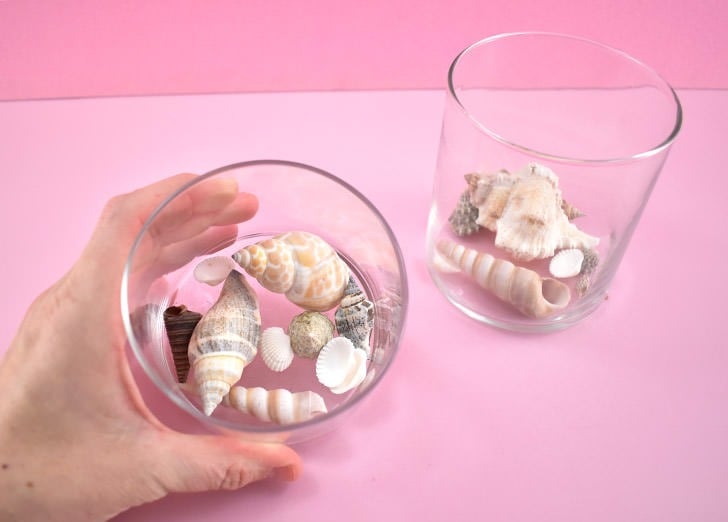 To get started you’ll need seashells and clear glass containers. You’ll want some good, thick glass containers because gel wax gets SUPER hot and the last thing you want is a broken glass holder with gel was flowing everywhere when all you wanted was some ambiance and pretty scents…

If you don’t have any seashells you have collected yourself and have no plans to hit up the beach anytime soon, you can purchase seashells on Amazon here or in craft stores. To get started you’ll want to kind of plan out how you want your shells to be placed in your jar. Be sure to leave a blank spot in the center for your wick. 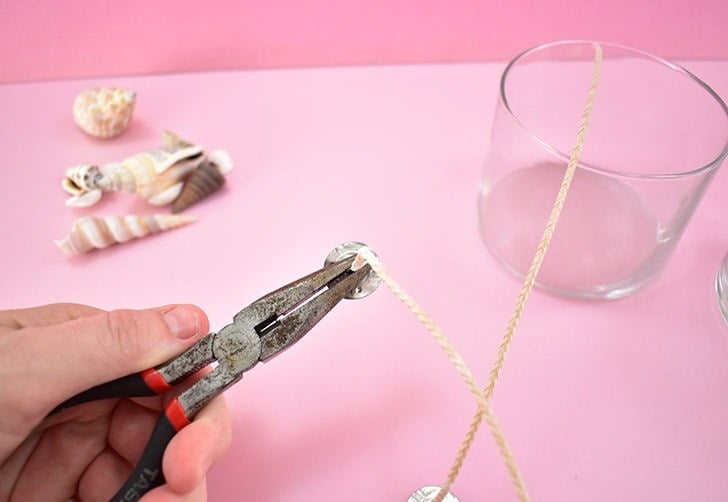 Wicks are just as important as the containers you use. Be sure to get wicks that made for use in gel wax because, again, it gets way hotter.

For each of your wicks take a pair of needlenose pliers and give the wick a good squeeze in its little metal holder. This is SUPER important as I learned with my second mistake… 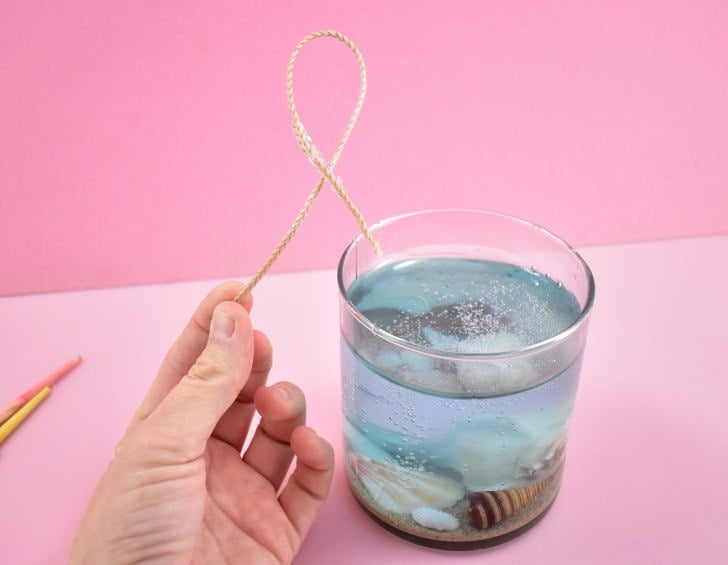 …I straight up yelled BS when that freaking wick just popped right the heck on out of there. Crap. 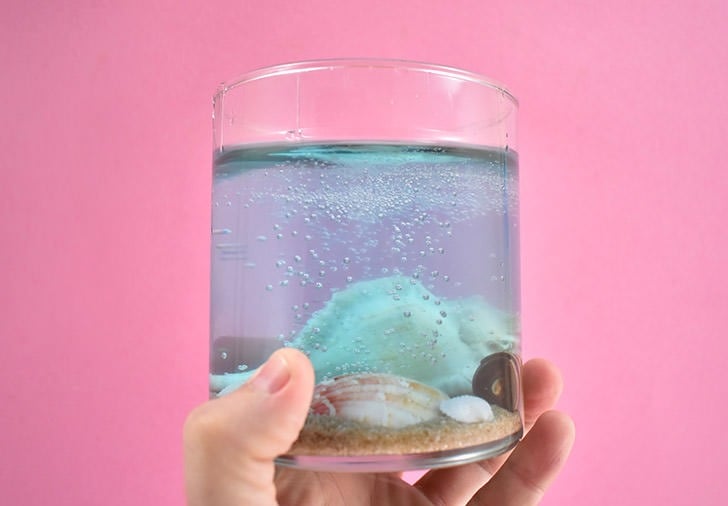 But while there is no freaking wick with which to light this candle, it is the prettiest with the least amount of bubbles obscuring it. This is the one that I made with the Gelly Wax and why it’s my fave. Moving on… 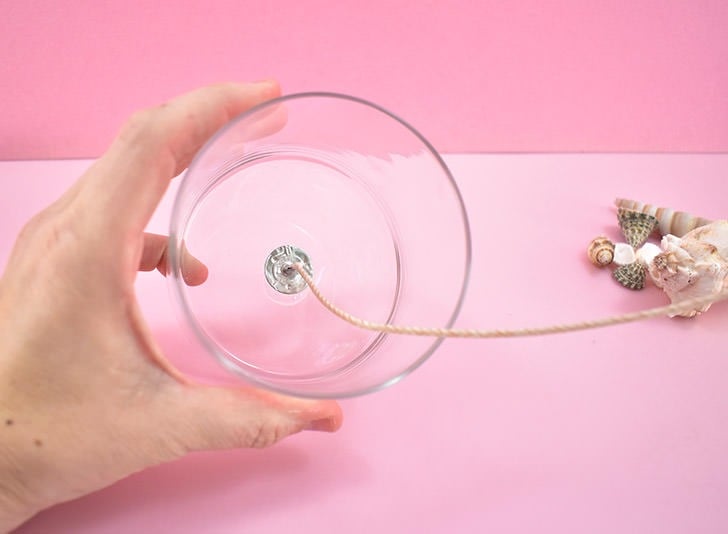 Glue your wick in place, bottom center of your glass jar. I used a hot glue gun and it worked in MOST of my candles :) 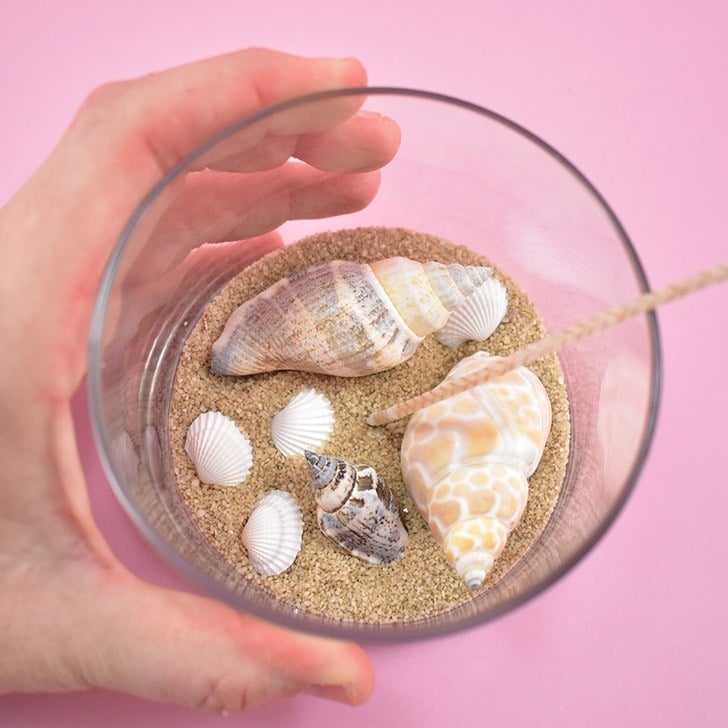 Pour sand in the bottom of your jar and arrange your shells as you’d like them. This is the best way to add the shells IF placement is a huge concern for you. Set the jar down on a flat surface and with something like a paintbrush, push the sand away from the wick. You want to actually see the metal bit that holds the wick down. This is a safety thing because of something about pockets of air in the sand could cause a flash in heat that could cause your candle to explode once it burns all of the way down. I don’t understand the science of it… I’m just doing as I was told and I suggest you do, too!

With your wax liquid, add your colorant and your fragrance oil now. Let’s talk about both of these things really quickly before moving on…

First up, the colorant. Now I had some liquid soap colorant that I asked the maker of if it would work in gel candles and I was told “absolutely!” But the thing is, they were wrong. The colorant didn’t disperse and stayed in little globules. I could stir and stir trying to get it to incorporate, but all it did was make a lot of bubbles in my wax and ruin it because it didn’t actually color it. You’ll need to find a colorant that works WITH gel wax. It’s not the same as soap colorant and it’s not the same as those little wax cubes you can buy to color candles. You’ll need a liquid. The Gelly Wax people make their own colorant, which I would assume would work really well but I didn’t try it. I instead got some candle coloring liquid from Michael’s for mine since I only wanted turquoise and it worked pretty well for me.

Next, fragrance. To reiterate, gel wax gets HOT and so  I have been told that you must to use a fragrance oil that has a flashpoint of at least 170° or you risk your gel candles exploding. Like, seriously, full on flippin’ exploding. So, I used my Ocean Breeze P&J fragrance oil that, according to their website has a flashpoint of “Flashpoint: >200°”. And just in case you are wondering, a flashpoint is apparently a comic book superhero (seriously how many comics are out there?!?), but chemically speaking it is “the temperature at which a particular organic compound gives off sufficient vapor to ignite in air.” Yep, we don’t want ignition, people, so check that flashpoint for reals. 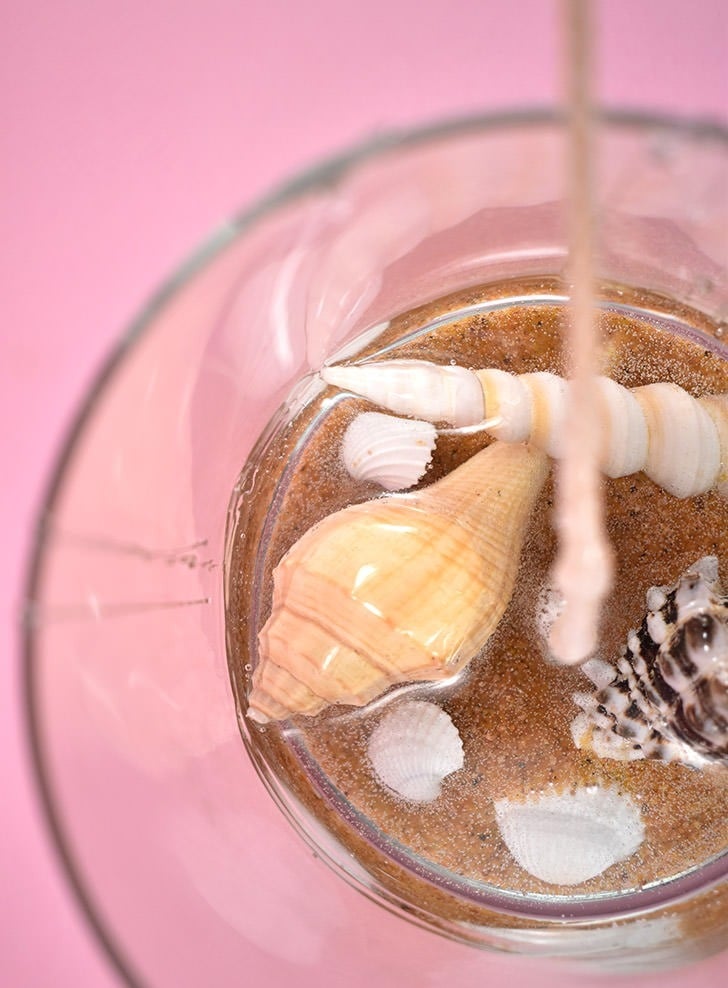 Pour a very, very thin layer of gel wax over the shells and sand. Allow the wax to sit and the air bubbles in the shells and sand to come up through the surface. Keeping this first pour thin means that the bubbles have less distance to travel and are less likely to get sealed into the setting wax. There will always be some bubbles, as far as I can tell, but if you can get that first layer over EVERYTHING and very thin, it isn’t very noticeable that it is a little bit bubbly. 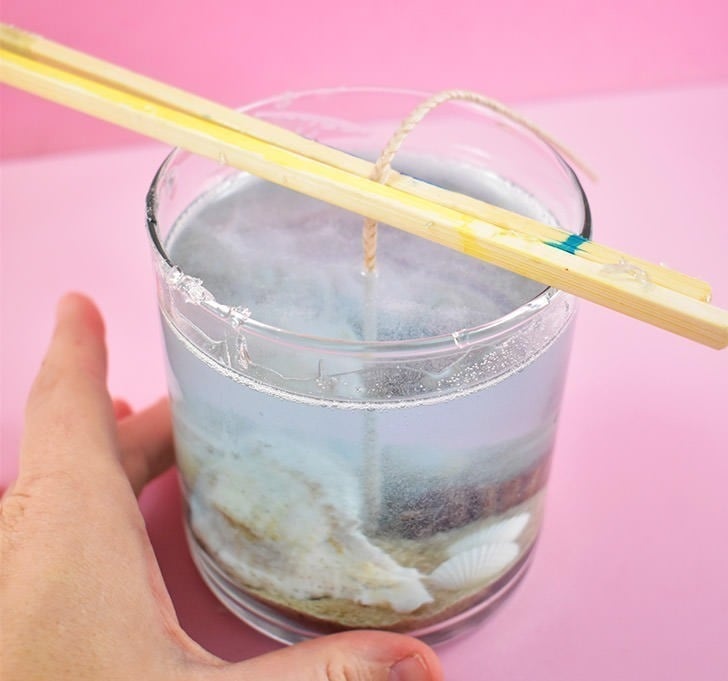 Each pour you’ll need to keep your wicks nice and straight so they set up right and not all wonky. I put a little bit of the wet gel wax on a pair of chopsticks and squeezed the wick in between them, laying them flat across the lip of the glass to keep steady and it worked like a dream. 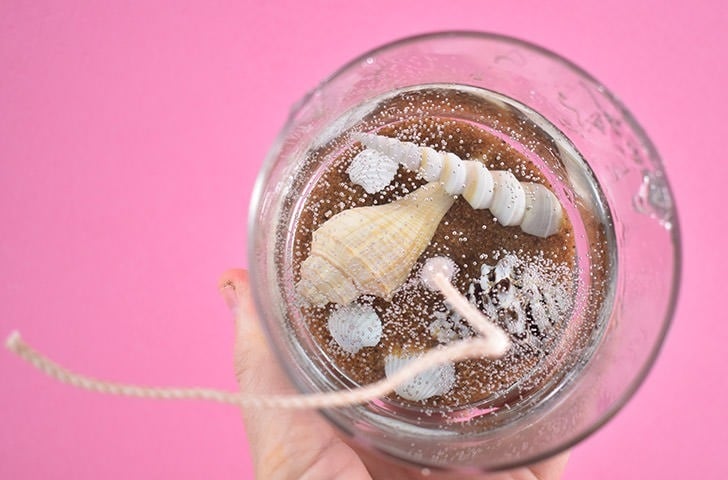 Add an inch or so more wax on top of your candle, just covering all of the shells. Hopefully, you covered everything well enough that you don’t have any more bubbles escaping, but just in case you do, keep this layer thin so those bubbles don’t have to travel up quite so far. 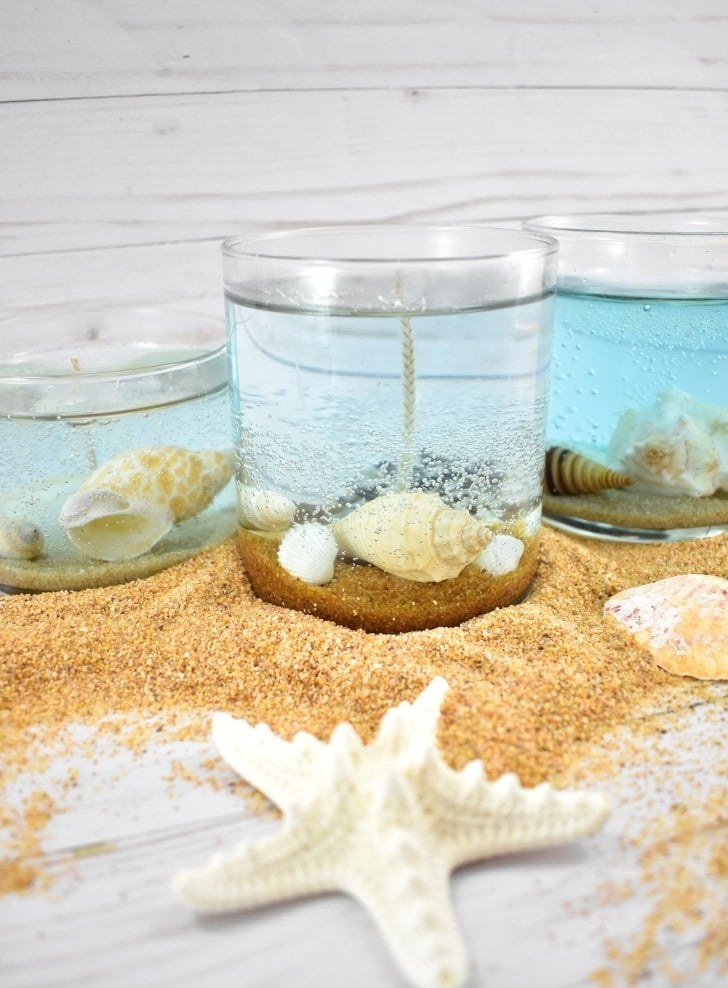 Finish your candle with one final pour, being sure to keep the wick straight in place with your chopsticks or other devised method of keeping it in place, and keeping the liquid down about half an inch from the top of the jar (or as necessary to accommodate a lid). Allow it to cool and set up and this project is dunzo! Ooh, and while we are at it, just let your wax cool in its pot rather than trying to clean it up while it’s liquid. It will set up as a nice gel and you’ll be able to peel most of it away!

Hopefully, since I worked out the kinks for you, without all of the epic fails of my first gel wax candle making experience :) But I have to agree with my Mom… while imperfect, they still are rather serene and pretty!

I'm a crafty cat lady with big dreams and an inability to sit still. I make it, I live it, I love it. Here at Dream a Little Bigger you'll find lots of inspiration for crafts, crochet, DIY, food, pet life and all things rainbow. Lots and lots of rainbows.
2.4K Shares
Pin2.4K
Share11
Tweet
This site uses cookies: Find out more.