The other day I was remembering a time when I was little and didn’t want to take a bath. It was in the very first house I ever lived in and I have no idea WHY I didn’t want to bathe but I knew that I did. I remember sitting on the edge of the tub and splashing my hands around vigorously for a while and coming out with a huff. There. I did it. I took a bath. But Momma was too smart for that and I only wasted time splashing the water because she sent me back in until I finished up a proper bath :)

These days I LOVE bathing. Showers and baths are just heavenly and when I have the time to be leisurely about it, I’m just about the happiest I could possibly be. But this summer when I had a tricky little boy pulling some of the same tricks I did as a kid I realized that sometimes kids just don’t want to get clean. After making slime this summer I knew that if I could make something fun for the bath, I’d be all sorts of set to get kiddos that don’t want to dip their toes in the water in that tub with little argument to wash away the day’s dirt.

And what’s more fun than play dough? It took me quite some time to get a recipe here that I really like and I’m sharing it with you today. One of the things to note is that this stuff does dry out. I made a whole bunch of colors of this in November and then didn’t get around to photographing it until here in January. Most of the dough is still totally useable but there was air in the little tubs I stored them with so they did get a bit crumbly. Luckily a splash of water and these guys are right as rain again. And since this is a tub toy a little splash of water to make things right is no trouble at all! 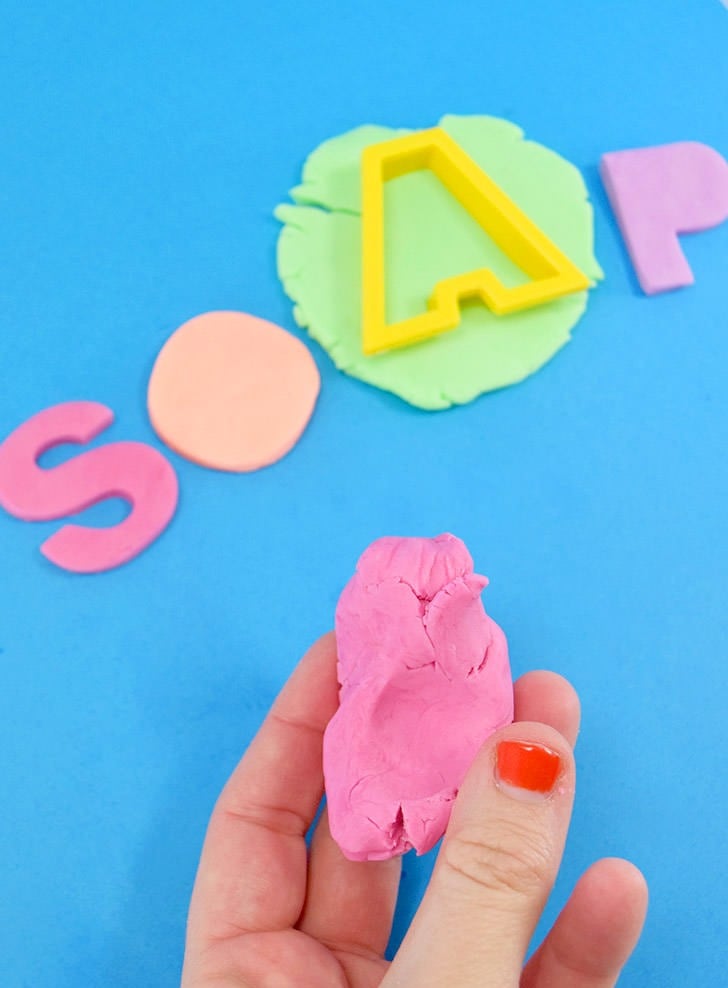 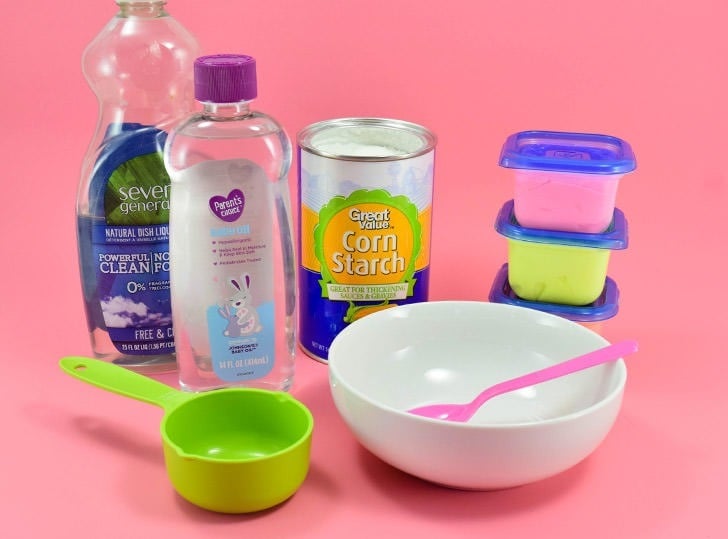 For my soaps recipes where I need a liquid, I have been using some really basic dish soap (no weird colors, scents, etc.) instead of paying a lot of money for Castile soap. I figure since I have to use dish soap instead of bubble bath (rash city, man!) it should work in every day soap recipes, too! This recipe also uses baby oil which I think extends how long the dough stays moist but can be substituted for whatever oil you already have on hand in the kitchen or wherever. 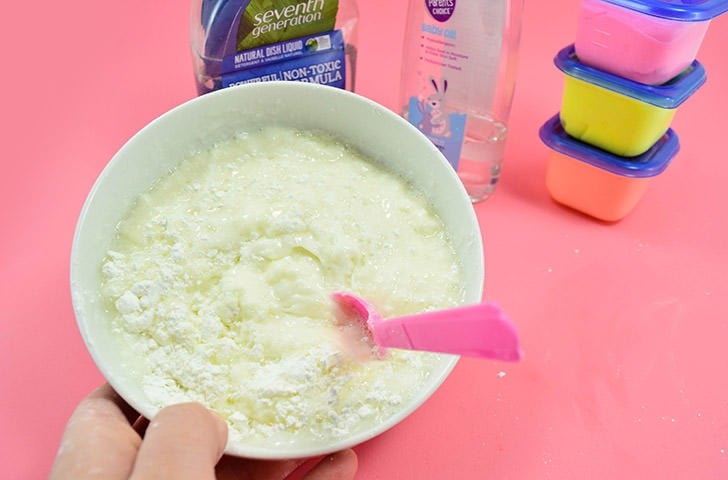 Mix together 1 cup of corn starch, 1/4 cup of liquid soap and 1/4 cup of baby oil until well incorporated. 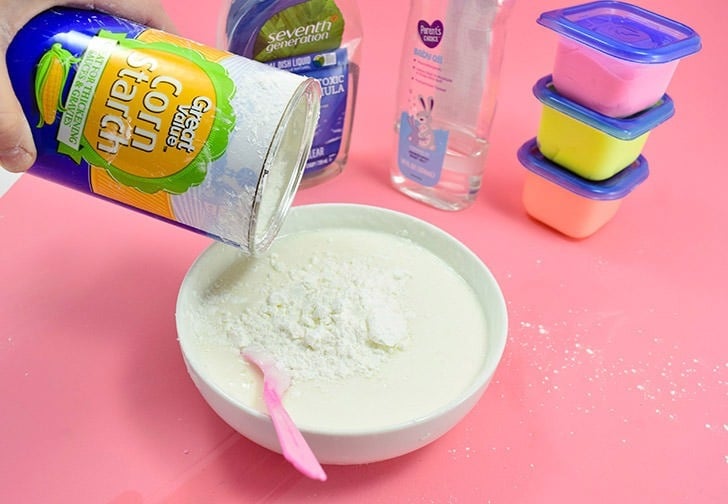 Now because I’ve tried this with several soaps I know that the resulting mixture can be totally different in thickness. Runny stuff won’t ever set up into dough so you’ll need to add starch as necessary until… 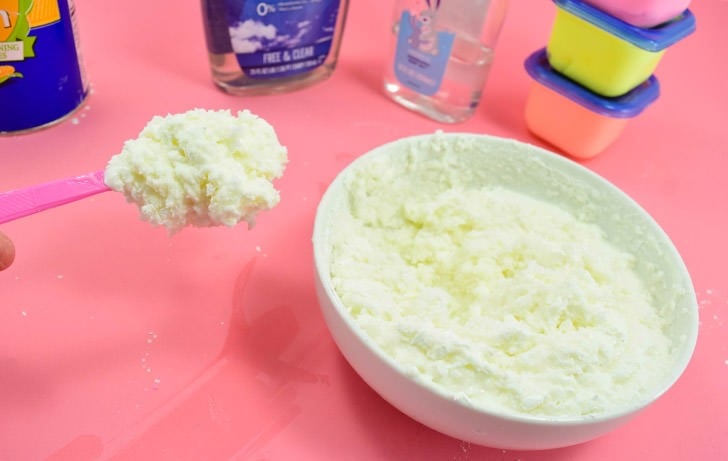 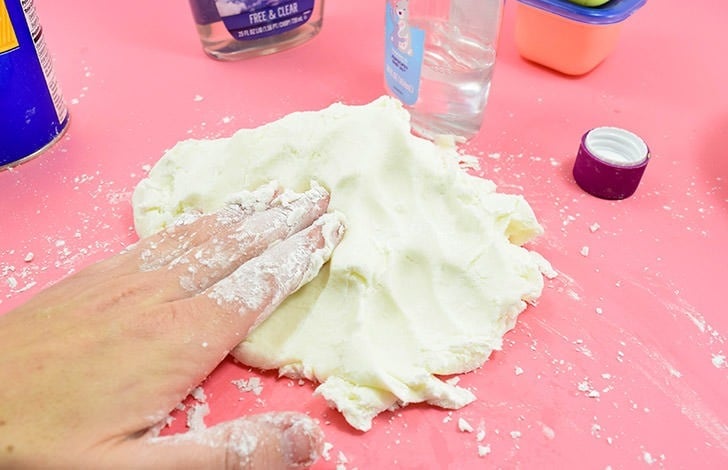 Once you’ve reached a good dough-like consistency turn the bowl out onto a work surface and using corn starch on your surface and hands, knead until a nice play dough is formed. 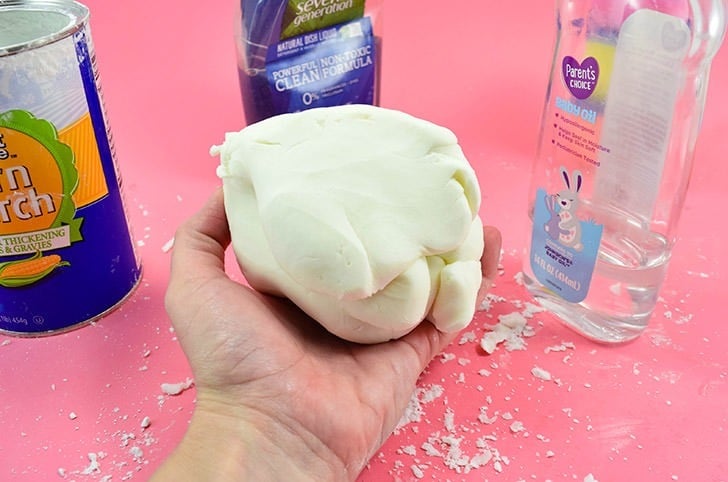 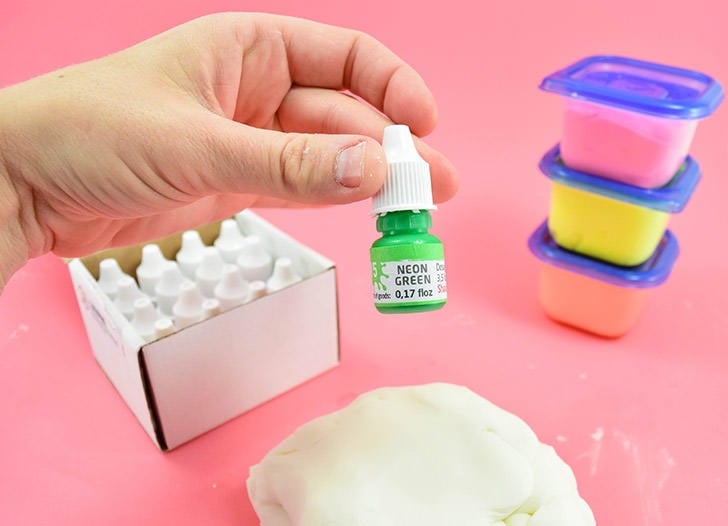 I decided I wanted neon soap doughs and so I used this amazing soap colorant kit (with neon colors, too!) that I am in LOVE with right now.

Add just a few drops to a bit of dough and knead it until the color is uniform. 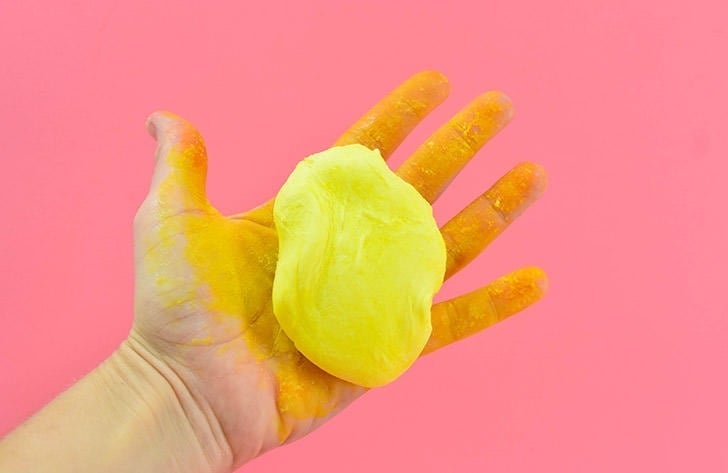 And just in case you’re wondering, you technically can use food coloring but my dear word is it a MESS that comes off on your hands as you knead the color in AND later when you’re playing with it (hello stained tub!) 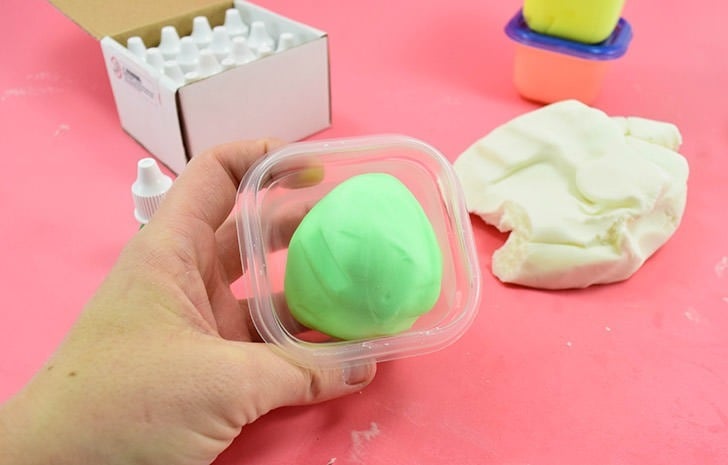 Now I put my finished doughs in these nifty food tubs and they did okay and were mostly still soft after 2 months untouched but I’d suggest wrapping the dough in plastic wrap if you’re doing the same to help them stay moist and soft. You can also do well by putting the dough in zipper bags with most of the air pushed out of them. 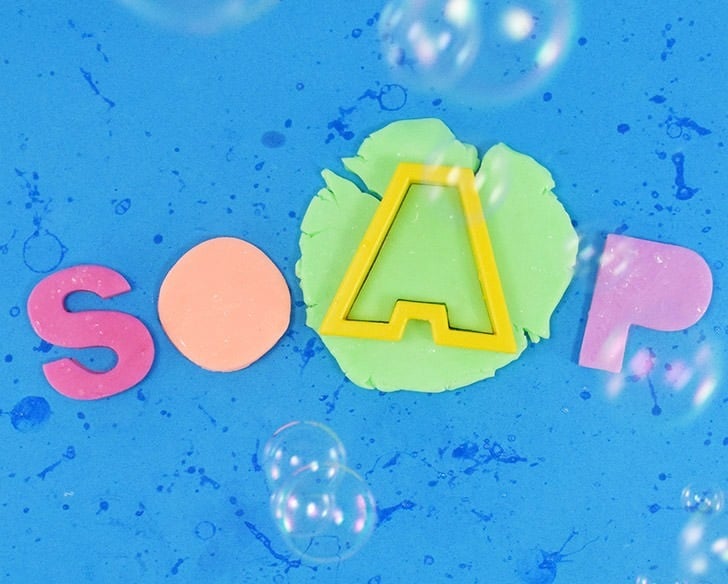 While fresh this dough makes awesome little shapes just like you’d create with any kind of fun dough. As it ages, though, you might need to add a bit of water (or more oil) and knead it in to get back that nice, soft feel. When a bit dry it can crumble, but still works well if squished and used with cookie cutters like above!

I have to say, I think that if I had some dough to play with in the tub I never would have splashed my little toes around in the water. But then again, maybe avoiding baths is just a kid thing and I still totally would! :)