Love Lucha Libre, also known as Mexican wrestling? I have a feeling that you’re gonna want to make these DIY Lucha libre cat toys filled with catnip! Grab the free pattern to cut your own or SVG file to machine cut. SO EASY. SO ADORABLE!

I suppose I should start this post of with yet another apology. I am SO SORRY that I have SO MANY adorable cat photos in this post. Gah! I just cannot seem to help it. I made some awesome DIY cat toys for my girls and since Marla totally flipped for what I’ve made her, IT MADE ME SO HAPPY! And then picking out only a handful of adorable photos from the hundreds I took (excessive, probably, right?) seems like SUCH A SHAME. *sigh* I’m going to guess, though, that since you’re here to learn how to making cat toys by hand for your furbabies, maybe you don’t mind me showing off my gorgeous girl with her new toys, though. Right? Probably. So let’s move on with lots of photos between my words :) 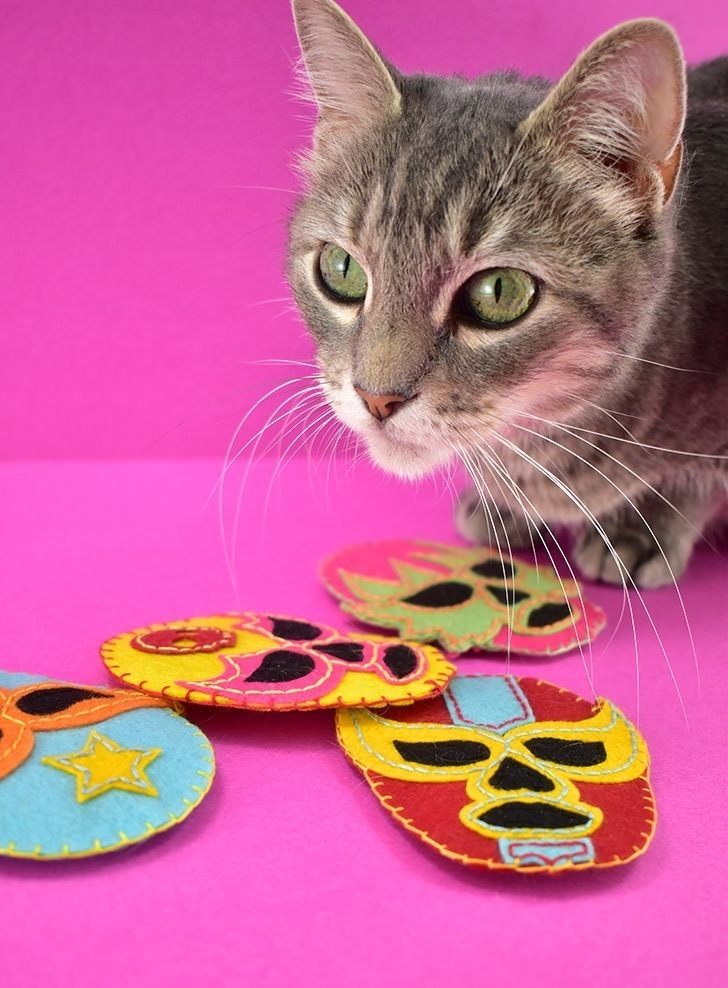 You may or may not realize that today is Cinco de Mayo. That translates from Spanish to “Fifth of May” in English but is also called Battle of Puebla Day. In many parts of Mexico, Cinco de Mayo is the celebration of Mexico’s military victory over Napoleon III and his French Forces in 1862 (which was considered highly unlikely). This battle occurred because Mexico owed a lot of money to some European nations and defaulted on their loans. To seek repayment, Britain, Spain and France mounted an offensive to try and get some of their money back. Napoleon decided that this was also a good time to add to his empire by way of Mexico and likely figured he would achieve that swiftly with his well-trained troops. Mexican locals, most of whom had no military training nor proper weapons, defended their country and won the battle with less than 100 dead (while the French troops lost nearly 500).

Just to clear something up, kind of quickly, it seems that a lot of people think Cinco de Mayo is the celebration of Mexico’s independence, but that’s actually another holiday on September 16. The more you know, right? :) And just as another quick fun fact, almost as much beer is sold on Cinco de Mayo in Mexico as on the Super Bowl and THAT is a LOT of beer :) Want to learn more about Cinco de Mayo? 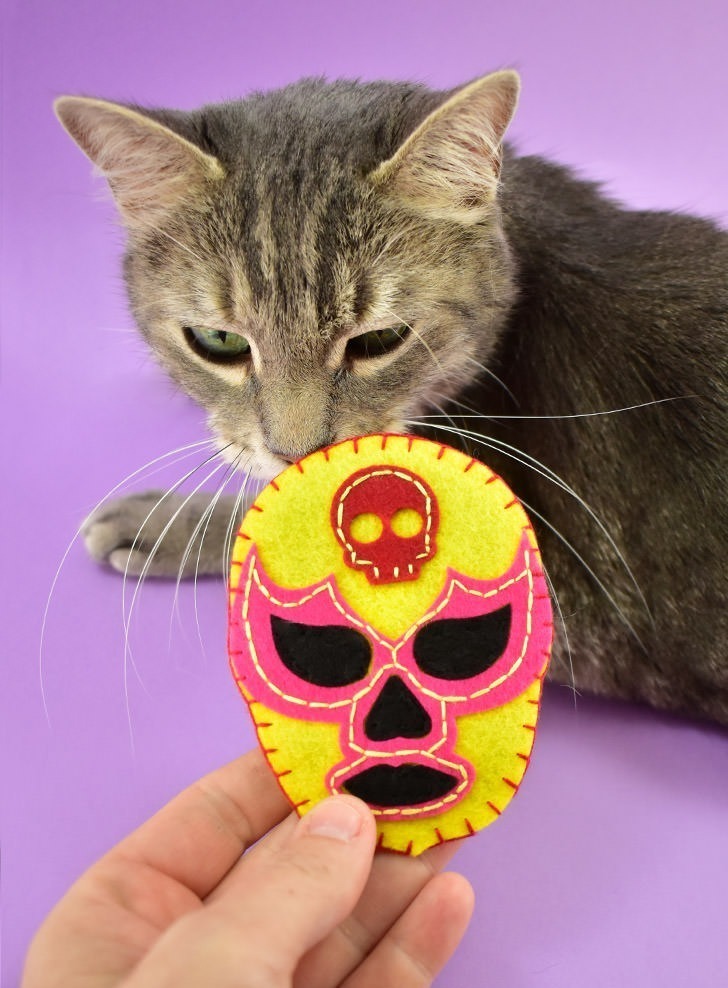 Okay. So wait, though, how does Cinco de Mayo have anything to do with Lucha Libre OR handmade cat toys? Well, nothing. But stay with me here…

My family takes a trip to somewhere in Texas every single year. My mom and I grab my nephews and we do fun things in Dallas, San Antonio, and South Padre and we call it that year’s “Texas Tour”. The 2019 Texas Tour is going to be a little bit different for a good several reasons. First of all, my ex will not be invited (haha!) BUT my sister and dad WILL be coming and that’s pretty darn exciting and a definite trade up. This is a FAMILY vacation, after all, and the more family the merrier! 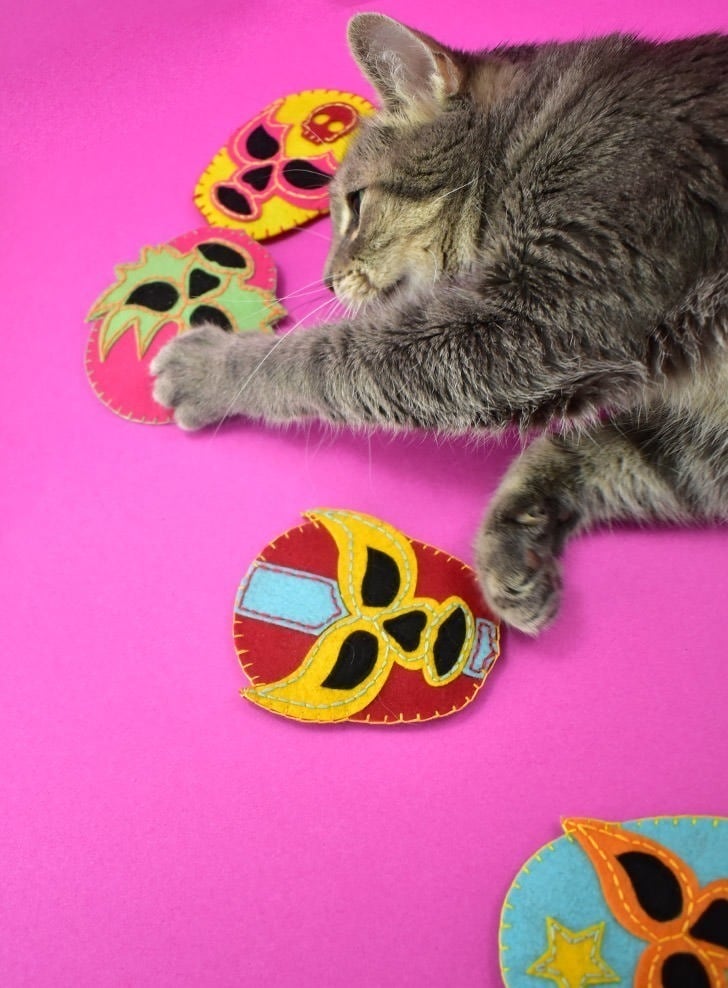 Another big difference, this year instead of driving for ever and ever (because Texas is flipping HUGE and I used to live at the very tip of it while my nephews lived north of it) we’ve decided to set down roots in one part of the state and stay there instead of roaming. This is great because this means I’m going to suffer significantly less carsickness. Wahoo! :) As a group, we also decided to rent this amazing house ON THE BEACH in Galveston. Guys, it’s going to be so amazing. I LOVE THE BEACH.

Every year everybody that goes on the trip gets to make a few “vacation wishes”. Every effort is made by myself to make these wishes come true. Two of last year’s fulfilled wishes included going to a magic show and going deep down into the earth on a cavern tour (guys, I’m so claustrophobic and it was awful for me but it was a freaking wish and so it was!)

The thing is, with kids, you kind of have to set limitations, right? I mean, how many little ones have you talked to that have said they want to be something totally impossible when they grow up. “I’m gonna be a firetruck!” You mean fireMAN? “No! I’m gonna be a FIRETRUCK!” Erm, cool, kid. And since I have no access to unicorn rides, I have always heavily researched the areas of the Texas tour so that each vacationer gets a list to help them decide what THEY want to do most on our trip that is actually possible. 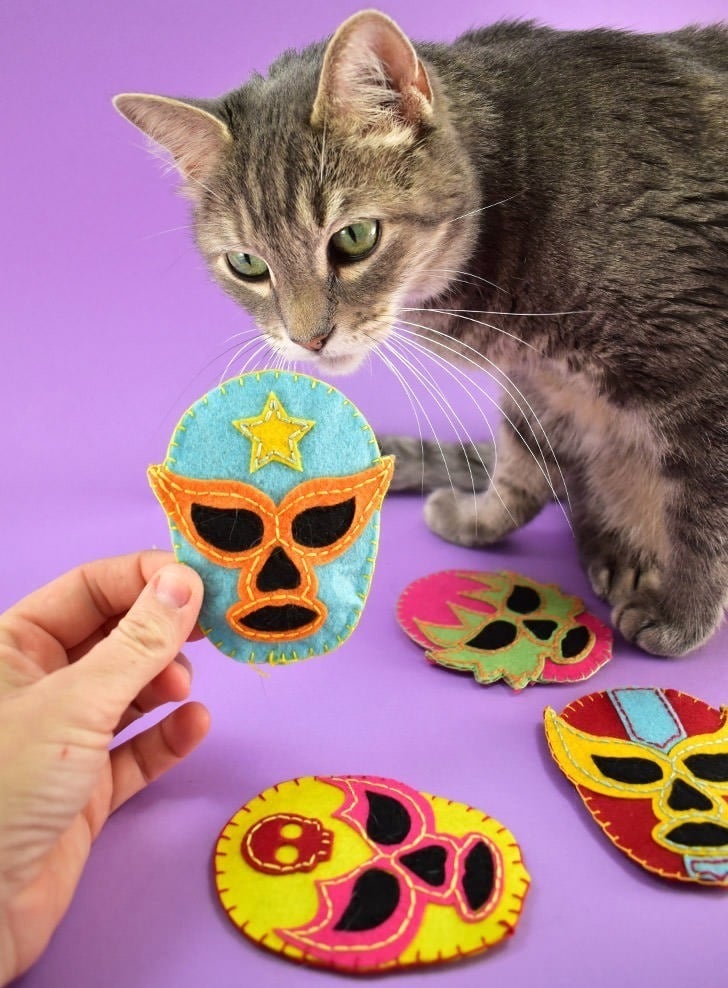 Guys, I research the LIVING DAYLIGHTS out of what is possible and the list is always humongous. Like, did you know in Galveston that there is a year-round haunted house? I did because that’s on the potential wish list! And if anybody wants to go I will drive them. And I will wait for them outside for them. But I’ll be darned if I’m going in with them again after I did that in San Antonio 2 years ago and thought I’d have a coronary :) And did you know you can take one of those old-timey costumed saloon photos for far less than half price in Galveston if you Groupon that business before you go? ‘Cause I do and, yep, that’s on the list as a wish for possible selection.

Since I take this SO SERIOUSLY I do not just go to Trip Advisor and read their top 10, or whatever, and call it good. I make a handwritten list of possible activities and then I search to see if they are something we could actually do in the area we will be in. Because sometimes things that our crazy bunch would love to do are NOT on any top ten list because we like to go off the beaten path, I suppose. And when I was researching all of the live entertainment options I crossed my fingers and searched for a Lucha Libre match going down. But wouldn’t you know, the biggest darn event filled with luchadors is happening today, Cinco de Mayo, a good month and a half BEFORE our trip. Again… *sigh*.

But thinking about Lucha Libre made me think of the captivating masks the Luchadors wear to hide their identities and I just KNEW that these masks would make the MOST ADORABLE CAT toys. And you know what? I totally think they did! 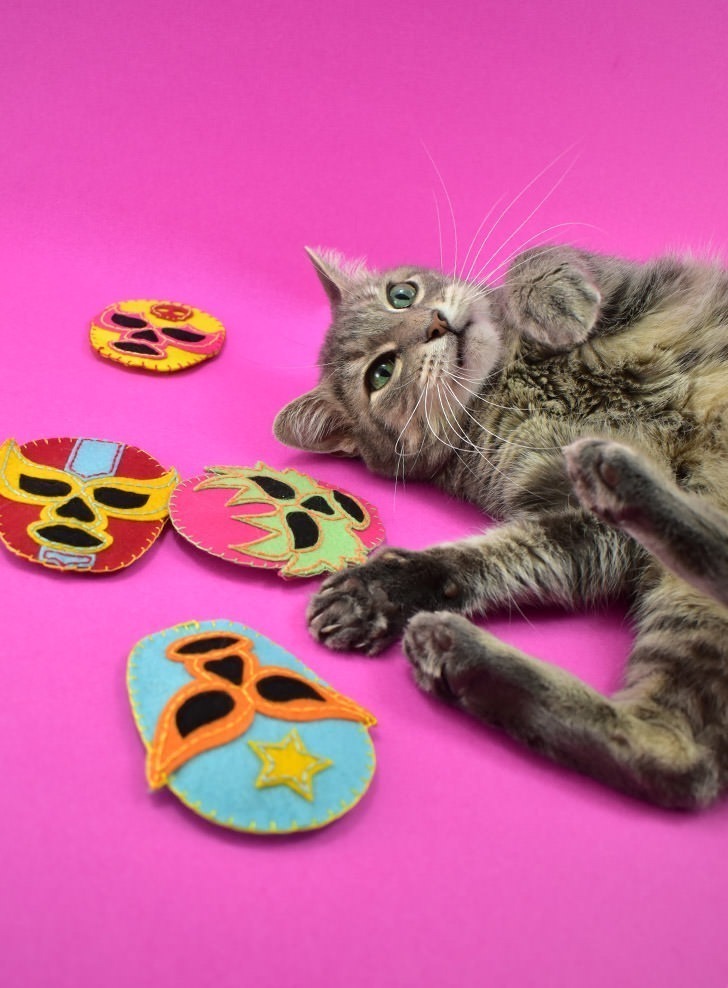 Want to quit the gab and start the crafting? Let’s whip up some Lucha Libre cat toys filled with catnip, sure to make the kitties go crazy!

If cutting by machine, for this project you will need:

If cutting by hand, for this project you will need: 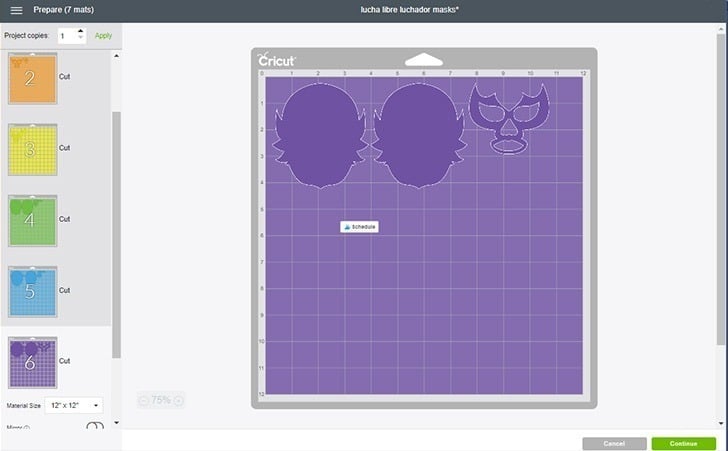 Cutting your felt pieces by machine is definitely the faster of the 2 options presented here and if you have a Cricut Maker, I’d strongly suggest using it. Upload your SVG file and then feel free to change the elements to match the colors you plan on using for each of your luchador masks. I changed these colors several times until I made the 4 I was happiest with and shared them here. 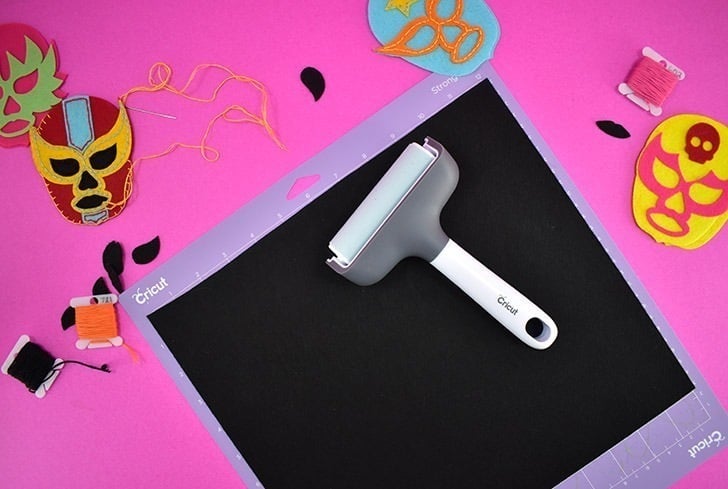 Apply your Cricut Felt in your choice of color onto a StrongGrip Machine Mat. Really press the felt into the mat and if you have a brayer, definitely use that (more in the paragraph below).

I’ve already talked about it in another post or 2, but I’ll go ahead and talk about how much I love my Cricut brayer again, just in case you missed it… A Brayer is this rolling tool thing that you use to add pressure to your cutting materials so that they adhere better to your cutting mats. This is especially helpful for more porous items like fabric and acrylic felt. I spent ages NOT buying a brayer because it was an extra cost, but when I went to cut fabric I HAD to get it to keep the fabric in place enough to make good cuts. And so I wound up ordering mine and paying full price PLUS spending more for overnight shipping. But the thing is, I SO wish I had gotten one earlier. If your mat is a little less sticky from lots of use, rolling the material into the adhesive with a brayer makes all the difference in the world and it really seems like it’s extending the amount of time I can use each mat successfully. In the end, that’s gonna SAVE me money.

When cutting out your shapes, you might want to run an extra set of the black pieces, the eyes, noses and mouths, because, for whatever reason, they seem to want to get lost really easily. I went ahead and cut 2x what I needed and, in all honesty, I STILL had to go back and cut one more nose to get business done. I swear I think the cat was stealing them but I suppose I’ll never know!

Also, you’ll need to cut TWO of each of the face/mask shapes per toy. I had added these in with my Cricut Design file, but since I uploaded images I cannot share it here. Sorry! 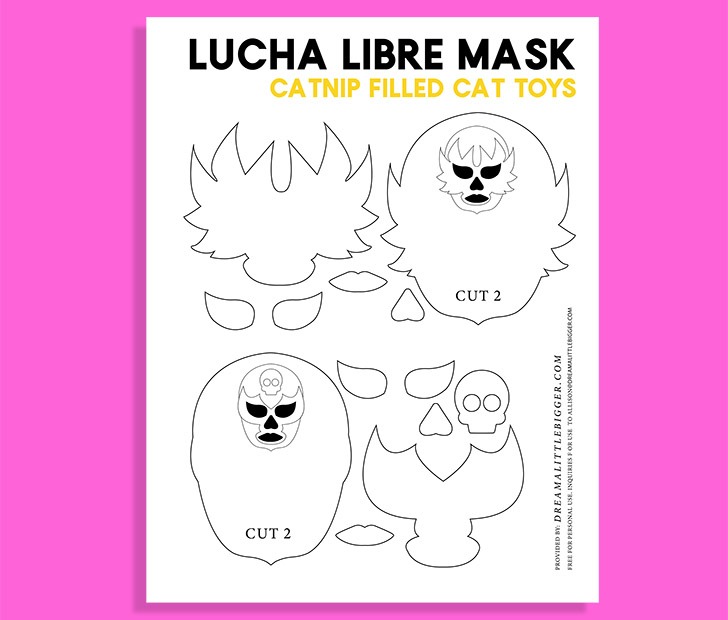 If cutting your pieces by hand I’d strongly suggest using freezer paper to help keep your cuts nice and neat. You’ll need to print your freebie lucha libre mask pattern and then adhere it to your freezer paper (I like to use a spray adhesive for this). Iron the freezer paper onto the felt and cut with nice, sharp scissors. If crafting with felt often, you might actually consider buying a decent but inexpensive pair of fabric scissors and using them ONLY for your felt projects.

FYI, your cut-out shapes will look a little different from my machine cut ones, but that’s just because they hand cut pattern has been simplified to make things easier. 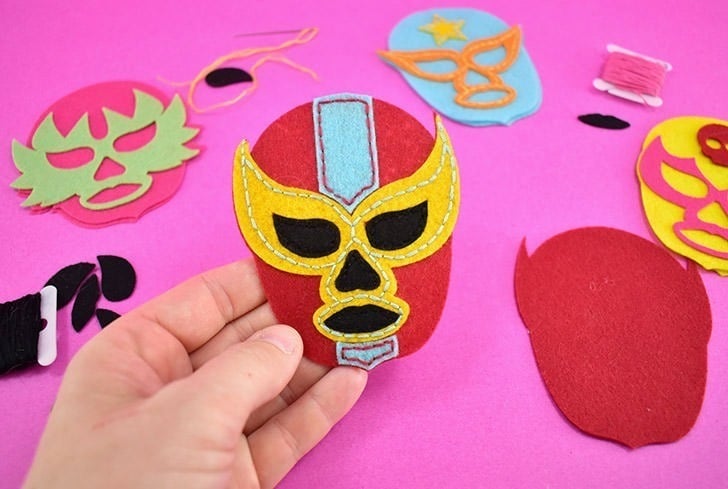 With your felt pieces all cut out, use matching embroidery floss to tack them into place. 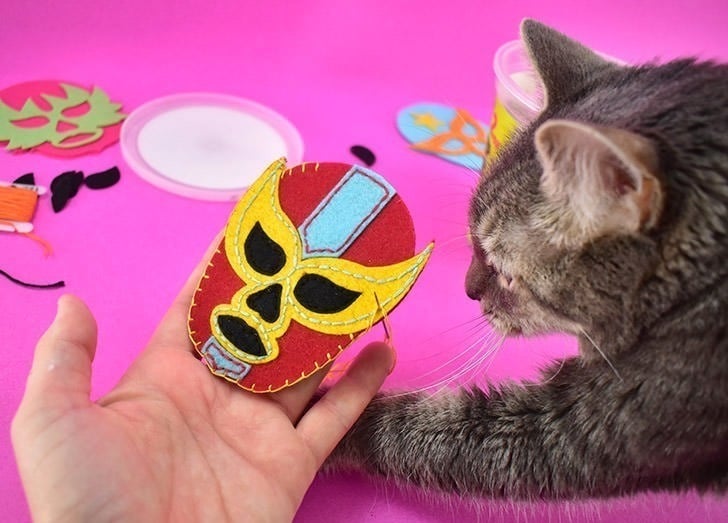 Place your stitched front mask piece and your second mask piece together so that they match up. Blanket stitch around the edges tacking the 2 pieces together, leaving an opening of about 1 or 2 inches wide to stuff your catnip into. 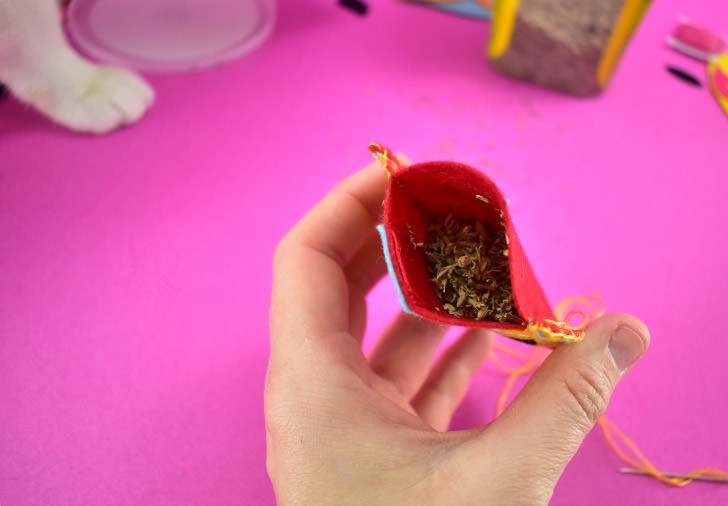 Tuck in a generous amount of catnip in between the 2 pieces of felt. Notice the kitty lurking up there? She’s about to go ‘nip made and biz is about to get REAL! :) 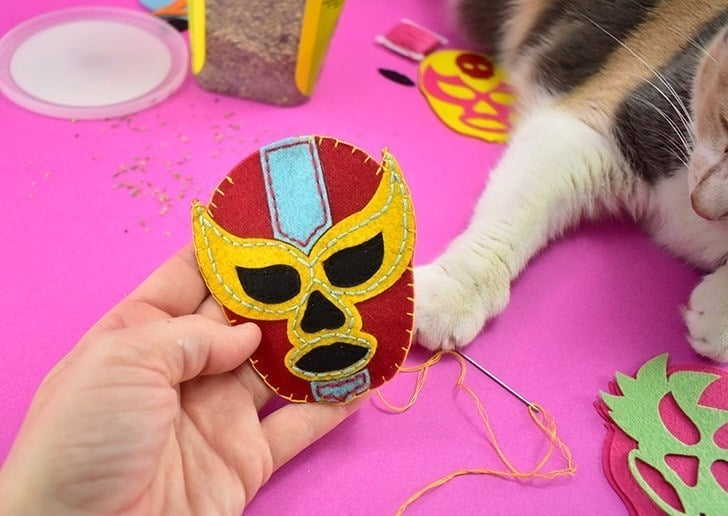 Finish stitching the 2 pieces together and knot off once you’ve gotten all of the way around. 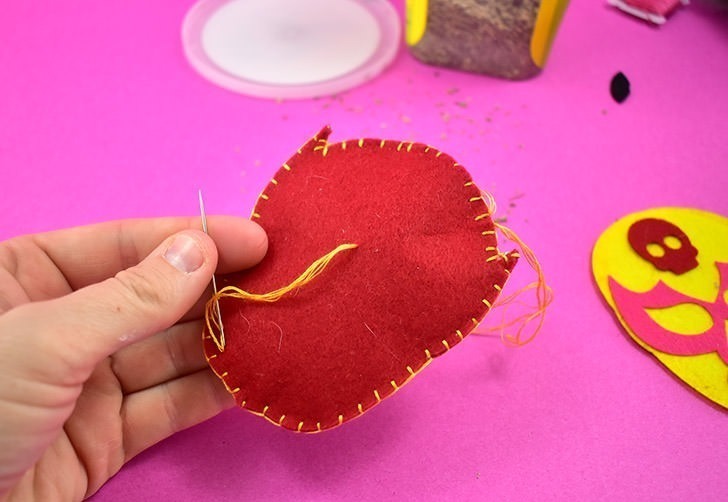 You can actually hide your tail by shoving the needle in between the 2 mask pieces from the side, allowing the needle and floss to come up through the back of the toy. Pull the thread taut and then snip close to the felt for a tail that will hide away inside of the toy. Cool, right? I LOVE this little tip :) 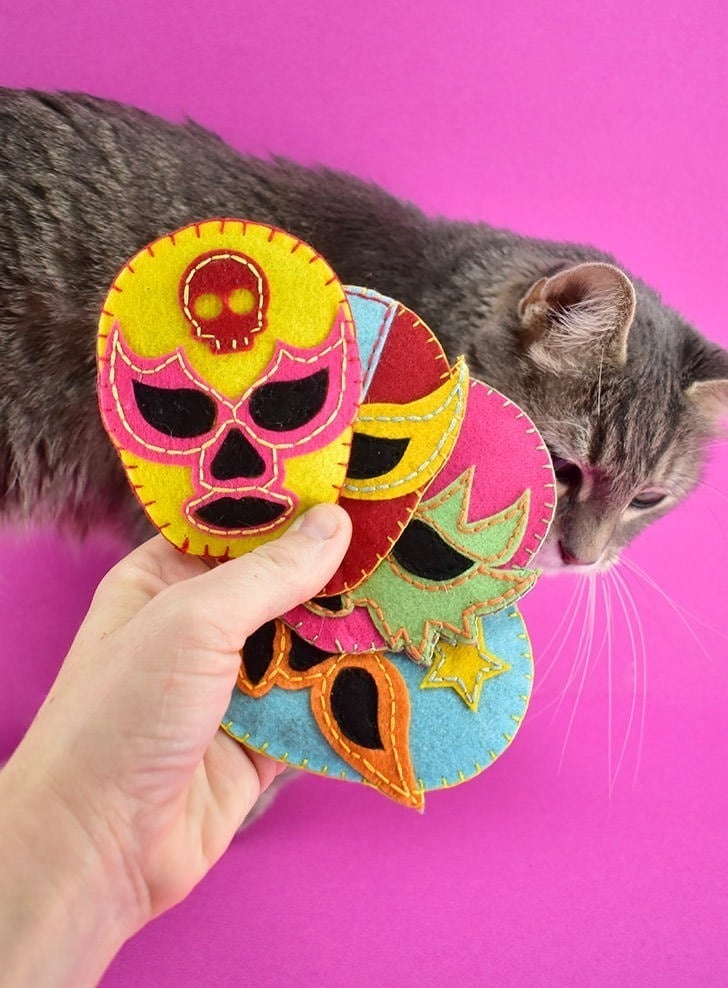 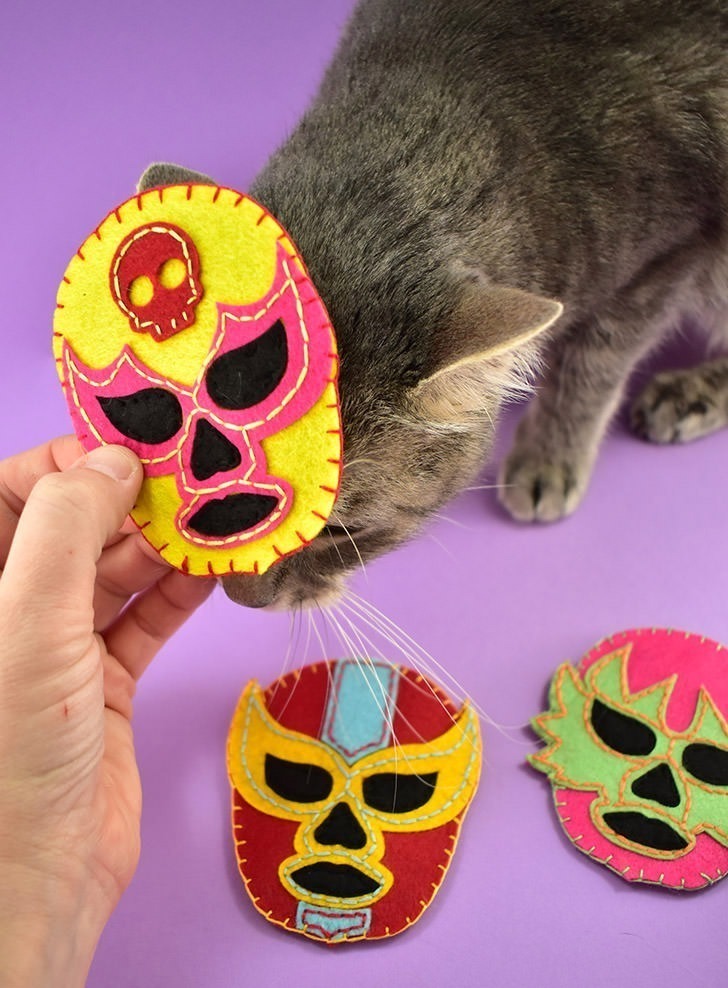 ‘Cause Marla does. Look at her jamming her head into that business. I’m all like, “girl, I need to take some photos of these suckers”. And she’s like, “but I LURVE THEM!” 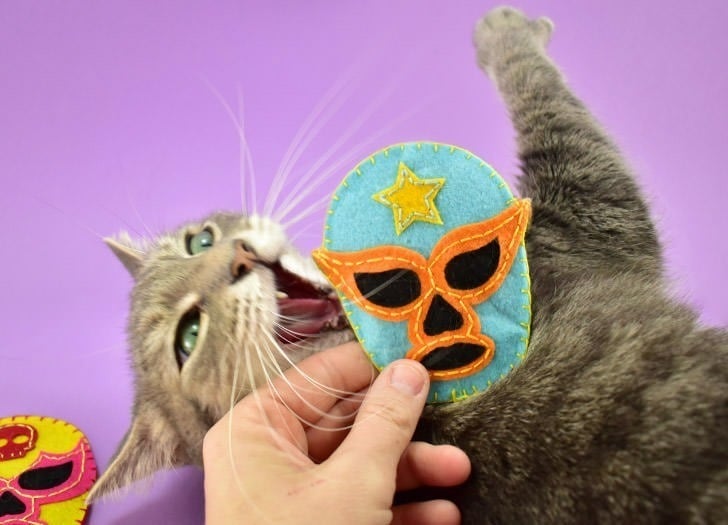 It’s, like, a super strong and maybe a slightly aggressive love, but I LOVE THAT SHE LOVES THEM… Handmade cat toys win every time 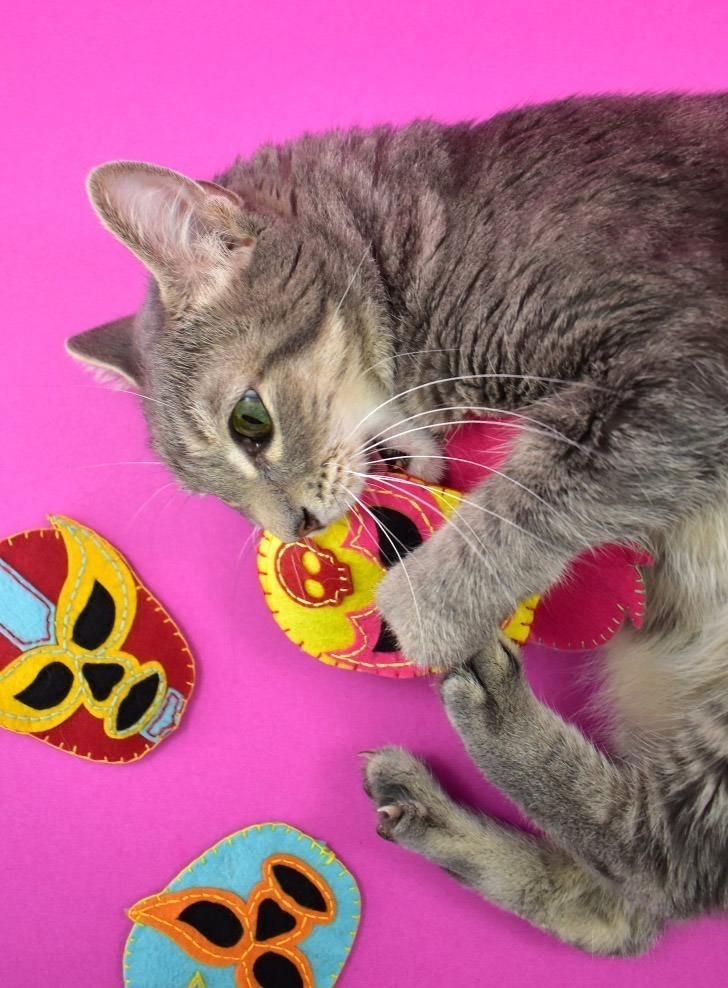