So I’m all about everything rainbow right now inasmuch as I can be… no rainbow hair or bed linens because Rob would just about have a cow on both of those things, I think :) but I am inviting a lot of colors into my crafting and I have to tell you, I’m absolutely loving it.

I’m woefully behind on all things bloggy and today I had this total wig out. Basically what happened is, well, I don’t know. One minute I was working and the next the top of my desk is on its side and all of my colorful tubs are stacked, as many as they can, on the floor with the rest out in the foyer. And I’m giving everything a good sweep and reorganizing all of the cords behind everything. This was a BIG job and it just sort of came out of nowhere! I mean, it’s great everything is so nice and neat and I’ve changed up the game and have a more comfortable work process but this went down out of freaking nowhere. 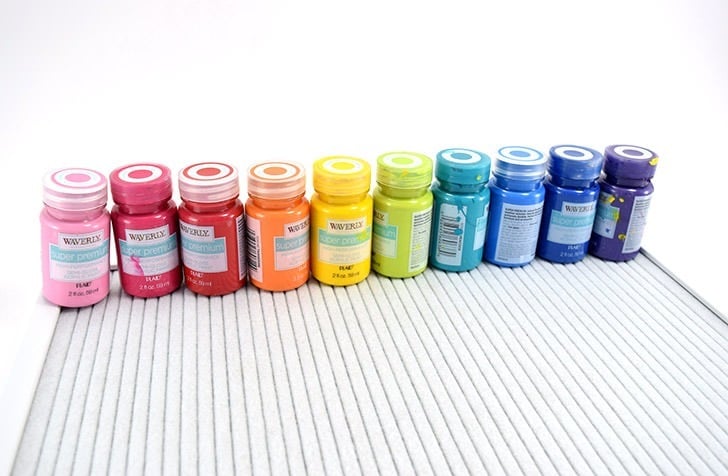 The same thing kind of sort of happened earlier in the week, too. I had found my little bag of my fave paints that I think they have discontinued because the only place you can find them is at Walmart and I was told once they’re gone, they’re gone. And they’re just sitting there next to my letter board I had just used for pics for another project I was working on and I just started painting the thing. Now I’ve wanted a rainbow letter board for ages and it’s like my hands went on auto pilot without consulting my brain and I found myself painting this sucker. Wait! I stopped and started the process of documenting this little gig and now we have a tutorial on  how to make your very own rainbow letter board AND for only $10 if you already have the paint in your craft stash so it worked out in the end, I suppose. See how I expertly cropped out the purple corner in this photograph to make it look like this whole thing is business as usual? <– ha! :)

This is one of those boards I snagged at Walmart some time ago, but I still see them every now and again in the stores in spite of the fact that I thought they’d sell out quick-smart. You can read more about it here where I was stoked to snag a $10 letter board or you can just go to Walmart and ask if they have any more. FYI, as of this moment, they don’t sell them online, you’ve got to find it in store. But for ten bucks? Get it, amIright? 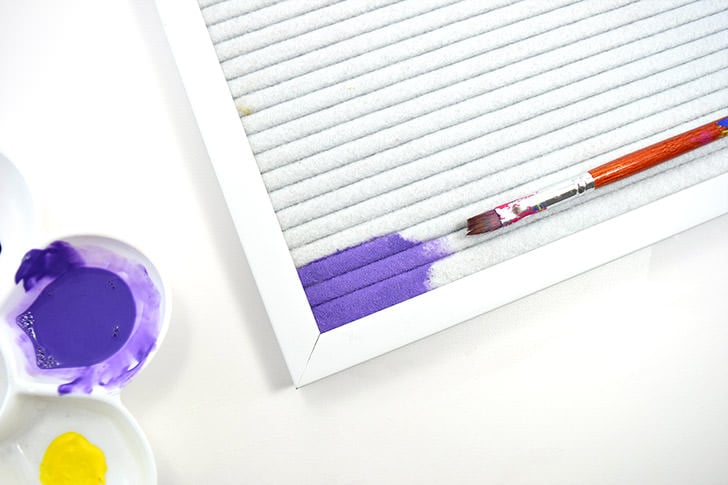 Okay so there was a significant learning curve for me with this project. SIGNIFICANT. And so I’m going to share with you what DOES work instead of what doesn’t…

First you’ll need to water down your acrylic paint so that your felt still has some spring to it and will still take on the little plastic letters. Acrylic is basically plastic, after all, and you don’t want to fill in the crevices with paint/acrylic/plastic because then the board won’t be useable. Think of when you go to open a window and figure out somebody has painted that sucker shut… this is basically the same thing.

Now the amount of water you’ll want to use can vary wildly based on your paint. If it is very thick you’ll need to add a lot of water. If it’s already runny you might not need much at all. In fact, the SAME BRAND of paints can be watered down different amounts to work properly for this project, so don’t go on auto pilot mixing up your paints just because they’re all the same. What you want is a very pigmented, very runny liquid and you’ll want to mix more of it than you think you’ll use. I started with my little flower paint holder and that was a mistake. I wound up moving on to baby mason jars and that was the ticket. 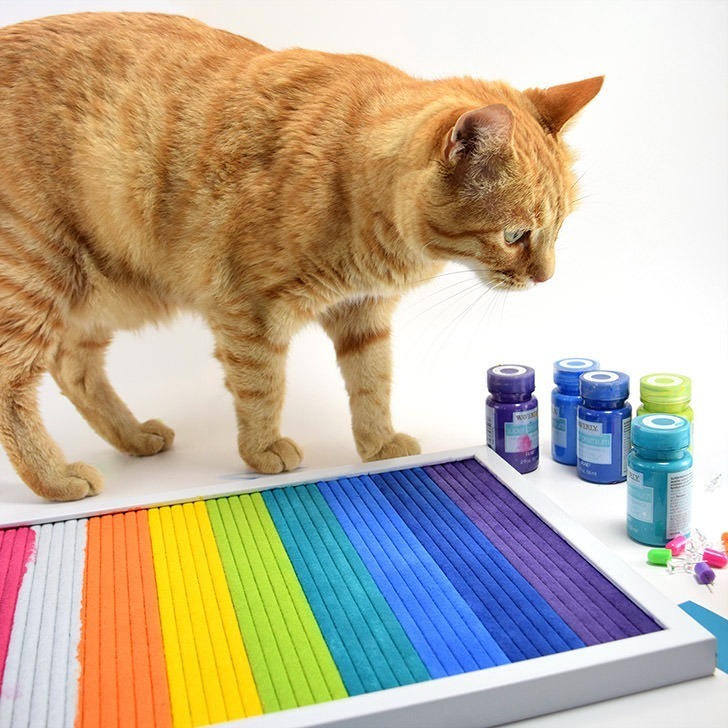 The problem working small in the watered down paint quantity with having to mix up a second, third or fourth batch is that you might not always get them the same AND this felt is gonna suck this runny paint right up and you’re going to go through a ton of it. Painting it on in different batches might cause your board to not look nice and solid colored and more patchy. This was a bigger problem for me with different colors because I’m a slow learner and didn’t notice the issue until the next day.

Okay, paint thickness covered, it’s time to move on. And I promise it really gets easier. Time intensive, but super easy… 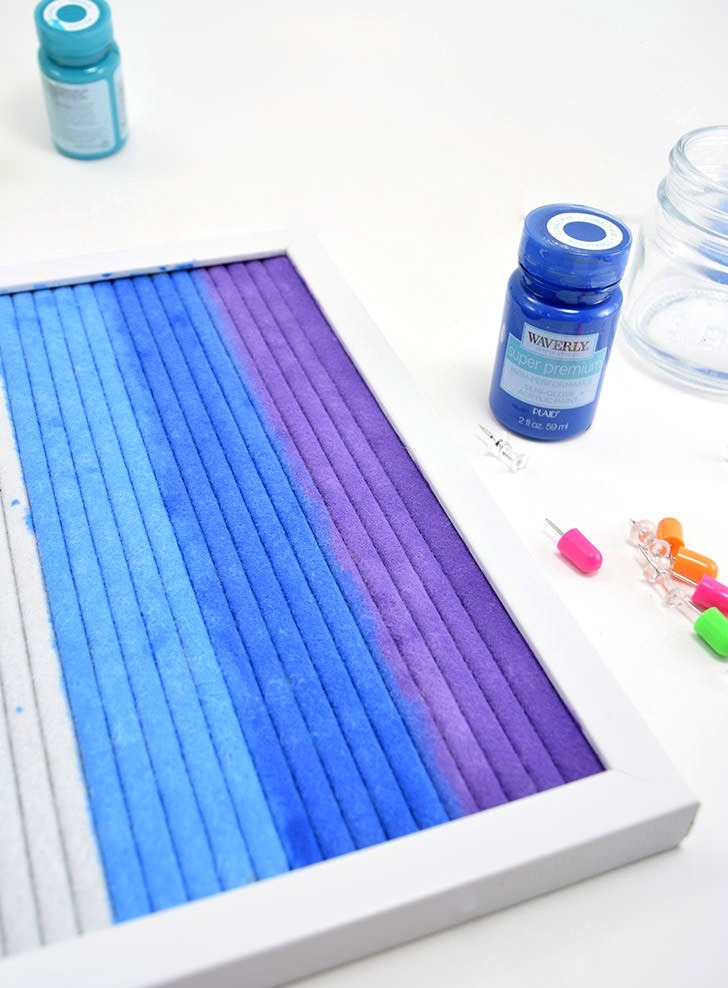 Painting something one color up against wet paint of another color never works well and there is always an issue of bleeding. See above? Womp, womp. But this is easily remedied. 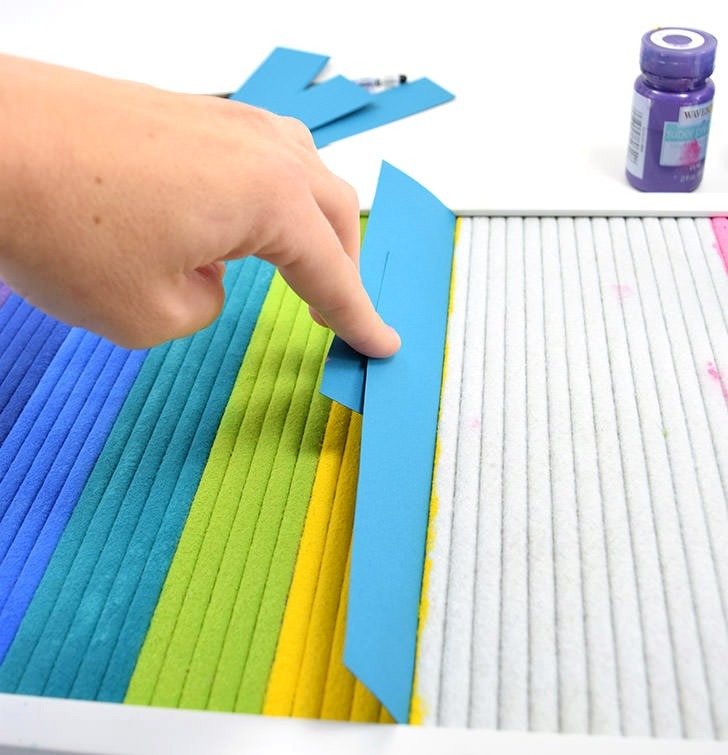 First allow your paint to dry a bit. Next, in between color sections use a piece of cardstock to fill the space and you’ll not have to worry about overlap. Again, I figured this out a bit late in the game which is why I had to paint my orange OVER the little bit of yellow that I accidentally overlapped. And getting runny, watered down paint to cover another color is DIFFICULT. This little gem utilizing scrap from your card stock stash is going to save you TONS of time. 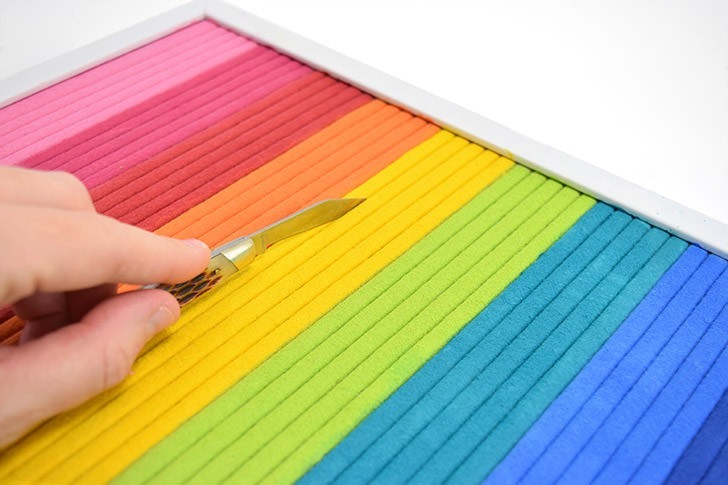 Once everything is painted and dried you’ll have a bit of clean up work to do. You can easily clean your frame with a Magic Eraser (or tape it off to begin with but that BS is for planners!). Next you might have row or two that still got painted shut next to its neighbor. To remedy this take a super sharp, thin blade and run it down each and every little space between the felt folds. Don’t push too hard because you might accidentally cut THROUGH the felt. You just want to loosen any areas that paint had closed up these little alleys so when it comes time to add letters you aren’t met with any resistance. 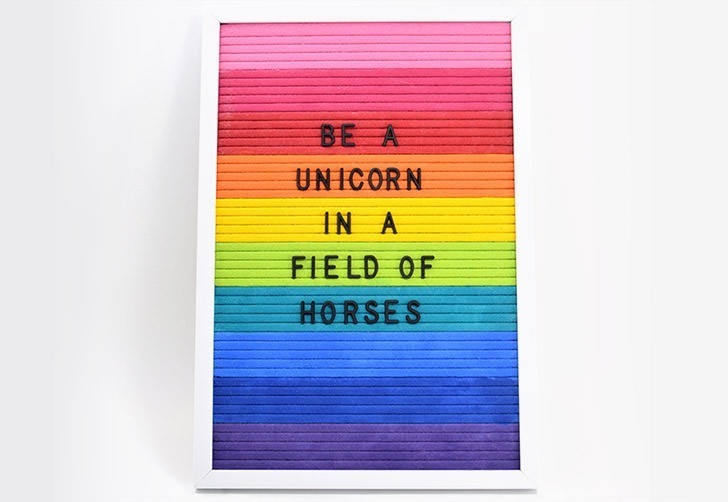 Ah, isn’t it great? But there are some issues that need to be remedied with a little bit more paint here and there, and I don’t know about you but I am NOT feeling those black letters.

But the good news is you can score some 1″ white letter board letters for not much money. It look like these can sell for anywhere between $9-20. I have the honey browser add on that can let me know when I’m getting a good deal and I LURVE it. It will automatically try known coupon codes at lots of online stores so that you get a good deal without any extra effort, which I love, and it can show you the history of the prices of lots of things so you know if you’re getting a good deal or are getting screwed. <– not a sponsored statement, just a helpful saving money while shopping online tidbit. 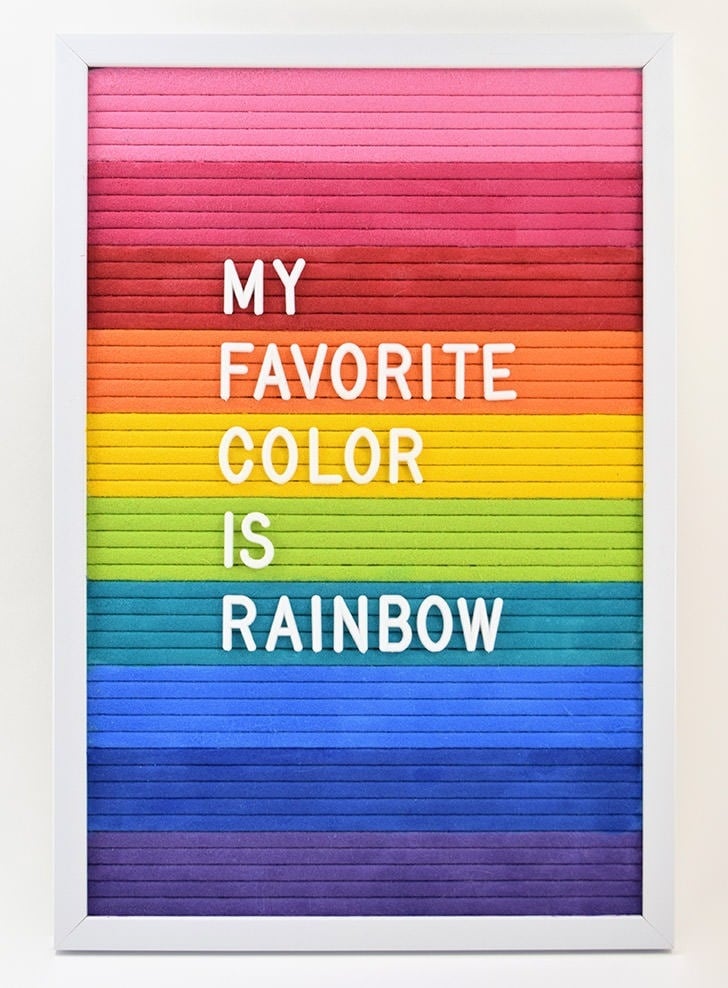 Oh my gosh, yes! Slightly bigger letters in white and touching up those mistakes are the ticket, right?

Along with a cute saying this board is my favorite thing in this entire office AND it was made on a whim. Don’t you just love when things on the fly turn out so well? And with my directions you can create your own without any of the mishaps and drama I faced. So get on out there and find yourself a cheapie white felt letter board and turn it into a thing of beauty… a rainbow letter board with white letters! 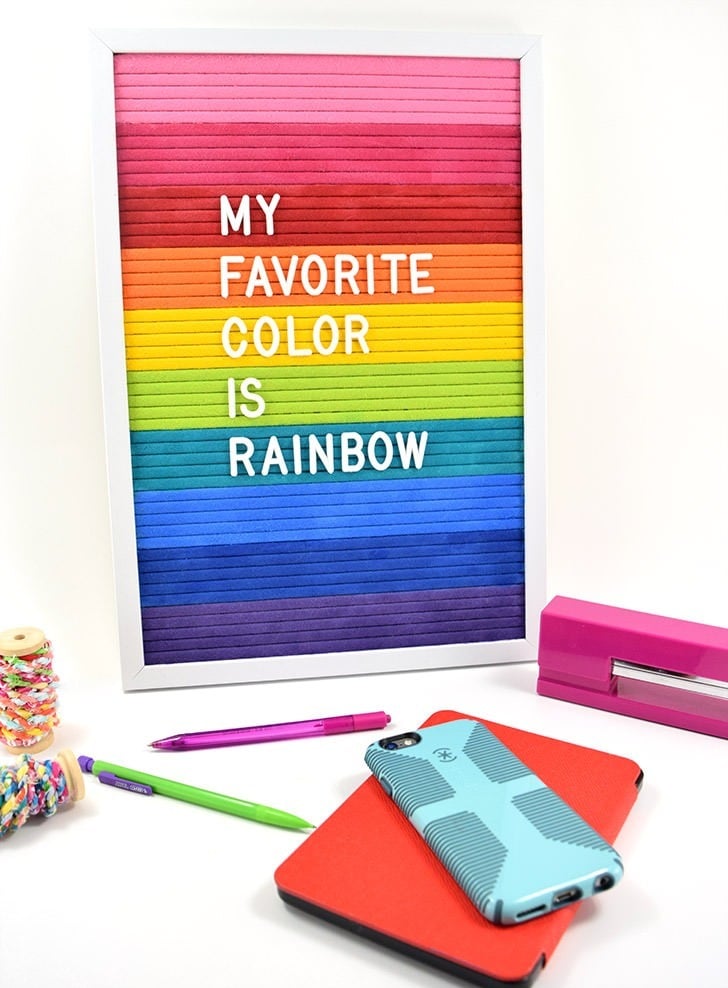