Have a kitty that loves to hide away? Using the yarn you have on hand you can create a lovely crochet cat sack hideaway they’ll just love! 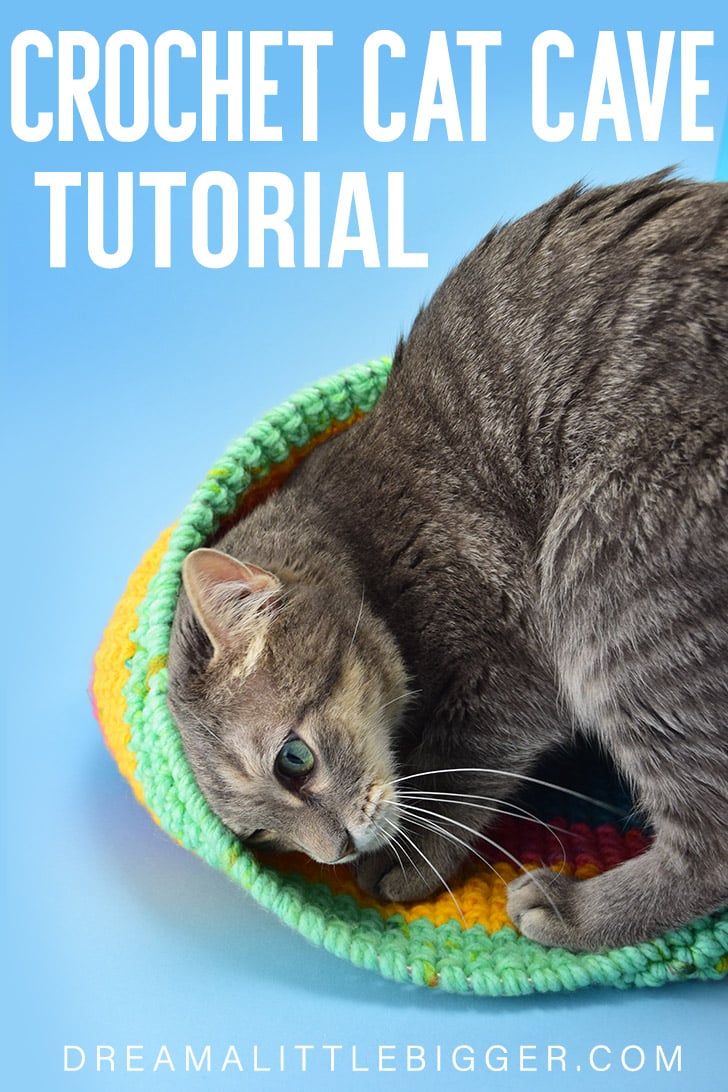 Here lately I have this obsession with yarn. It’s, like, a real problem. When I was traipsing through Michael’s I saw these Caron Cakes. They aren’t exactly new or anything BUT these were CHUNKY Caron Cakes. I have no idea when these hit the shelves but the shelf at my store was pretty much cleaned out. I decided that I was IN LOVE and purchased a Chunky Caron Cake in Rainbow Jelly. Truth be told, though I had no plans for it and it sat in my office for ages. I’m such an impulse buyer but at the craft store, it borders on ridiculous. 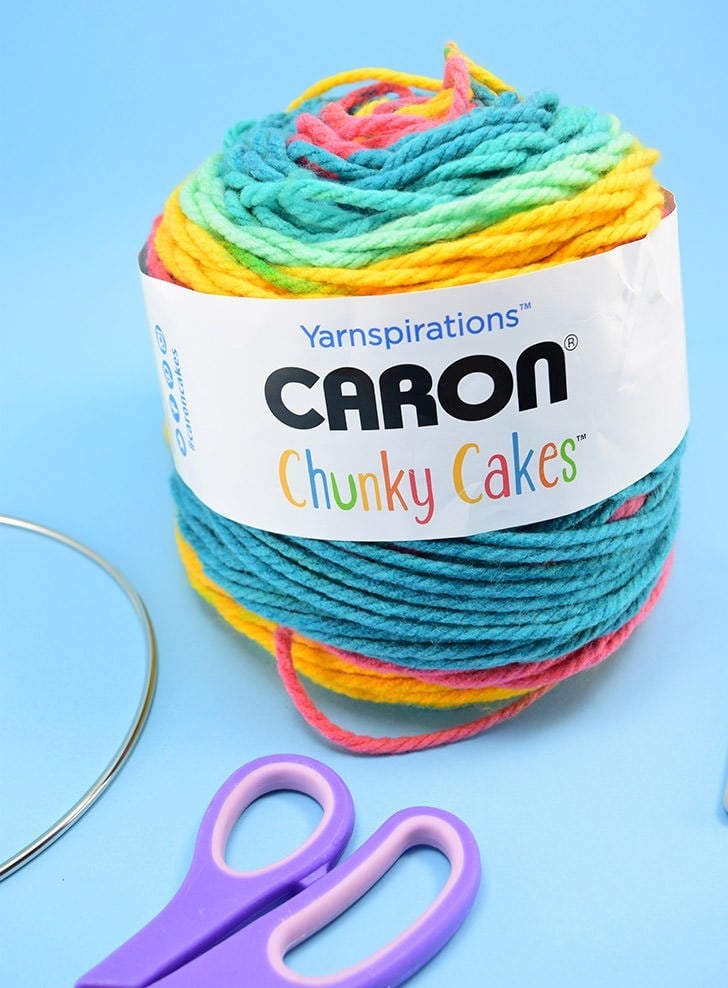 Just look at that beautiful yarn. Could you say no to it at the craft store? It’s pretty like a puppy with sad eyes, which is why I can’t go to the pet store :)

Every time I’d clean up my office slash craft room, I’d move this big ol’ ball of yarn so that I could clean underneath it. One day I just figured it was time to use it. I’ve been making lots and lots of cat crafts here lately? I’m so pleased to have 3 healthy kitties, again. And when I looked at this yarn I figured I’d make something for them.There wasn’t quite enough yarn to make a blanket or a throw. So I decided to make a crochet cat cave. 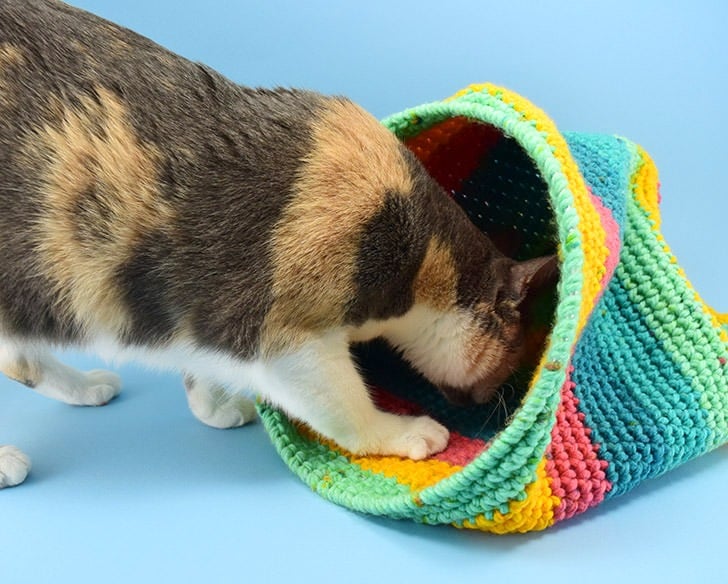 As it turns out, this project was a real frogger …

and I started it, no joke, 8 times and took it out, no joke 7 times. That’s where the word frogging comes from, in case you didn’t know. When hookers have to take out their work it’s called frogging because you “rip it, rip it”. Get it? :) 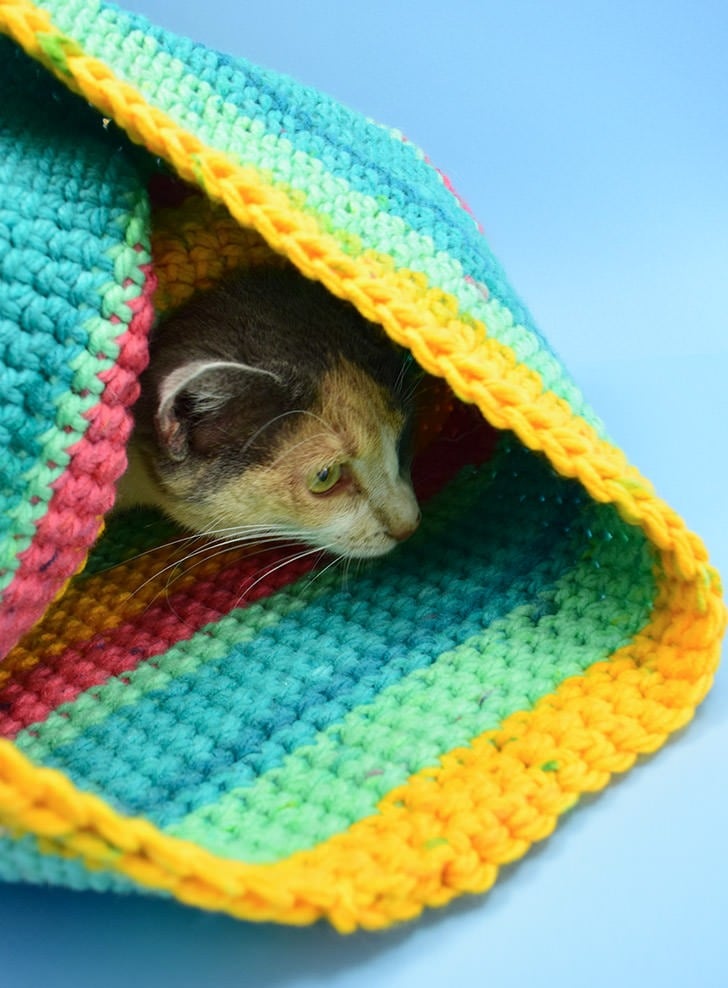 On my 8th and, thankfully final attempt, I figured out how to do this so that it worked just perfectly. What you have is a lovely little crochet tunnel with one end that stays easily open for kitties to climb into. So far my cats don’t quite get it… 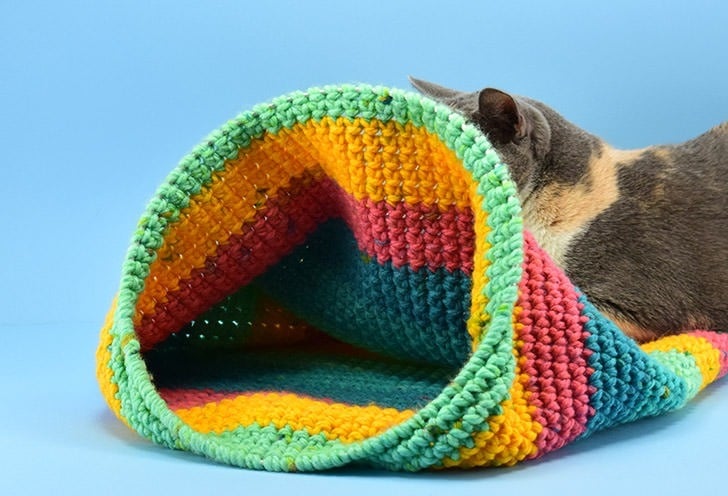 They mostly lay on top of it rather than in it, but they’re smarties so they’ll work it out eventually :)

Let’s hop on those directions and make your kitties a crochet cat sack hideaway. 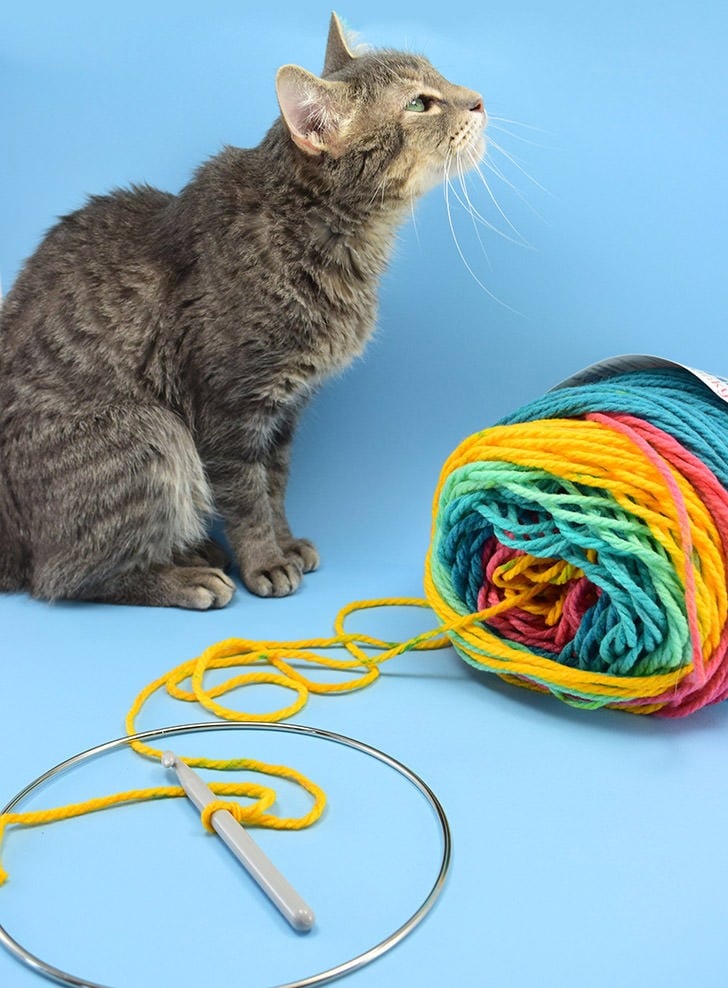 For my crochet cat cave, I decided to use a 10″ steel hoop that I purchased at the craft store for around $2. I initially started with a 12″ hoop I already had on hand but it was really, really big and was using up a ton of yarn. Since I didn’t want to buy more yarn for the project I then tried an 8″ hoop, also on hand, but unfortunately, my bigger kitties couldn’t fit. I know because I tried to make Maybe jump through it and it got stuck and then she was irked and it was this whole big thing. But it would have been the PERFECT size for using only a single cake of yarn.

If it was just my little kitty Marla (the one above) I’d probably go with the 8-inch hoop but I think that for the majority of cats a 10″ is the way to go. If you’re not sure what size you might buy more than one hoop and see which one will easily slide over your cat’s body. No sense making something they won’t even fit in!

Which Hook to Use? 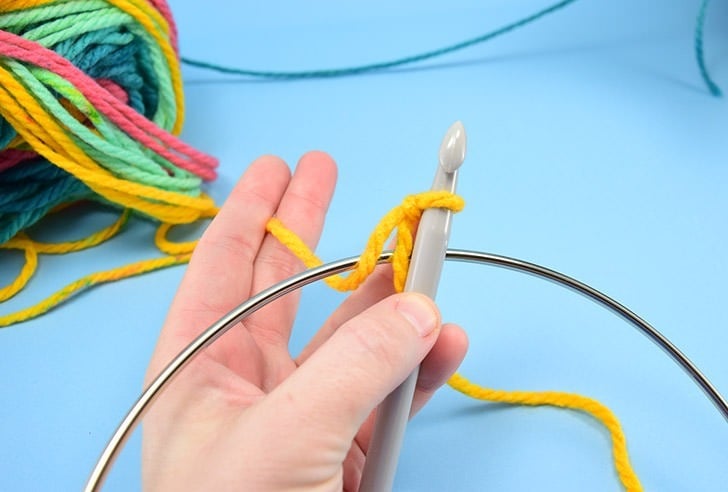 For this project, I’m using a big ol’ crochet hook, a “P”. On the packaging, the Caron Chunky Cakes suggests using an “L” hook but when working with that size I found that my stitches were too tight and it was difficult to continue working in the round the further I got from the hoop. Unless your stitches are normally fairly slack, I’d suggest using a hook a few sizes larger than recommended to keep a consistently loose gauge.

How to Crochet Around Something…

First I’m going to show you how to crochet around a hoop. (Or anything, really). To start, prepare your hook with a slip knot. Keeping your yarn on the outside of the hoop, bring your hook inside of the hoop like in the image above. 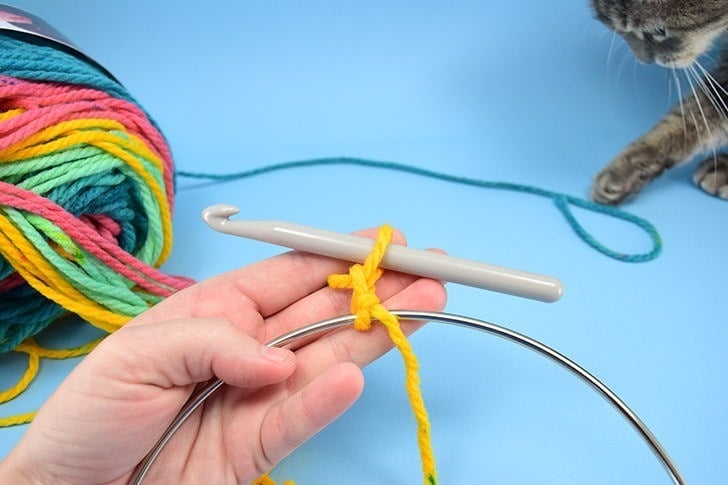 Yarn over as usual and create a single crochet stitch. See up there? That’s the first stitch on the hoop. 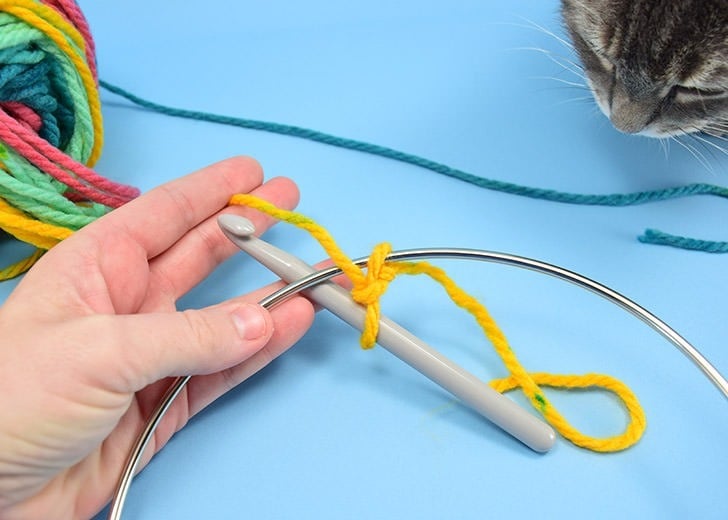 We’re going to continue making single crochet stitches around the hoop. To do that simply place the hook under the hoop like seen above. 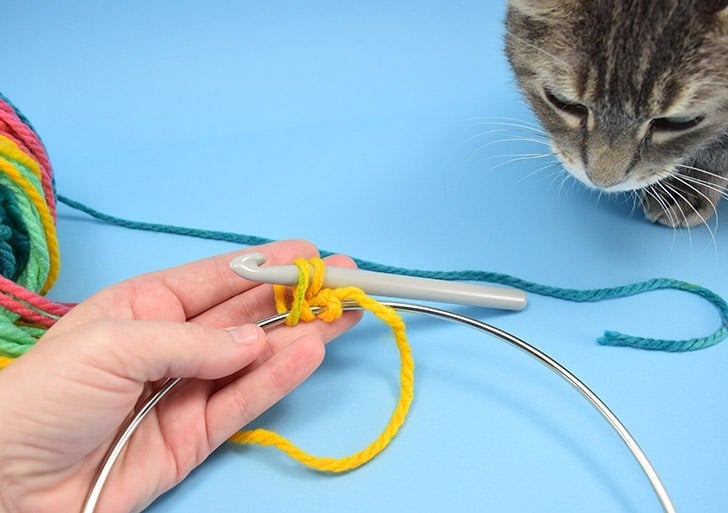 Yarn over and bring the hoop back through the inside of the hoop. Keeping your hook level with the outer edge of the hoop create your single crochet taking off both loops on the hook. 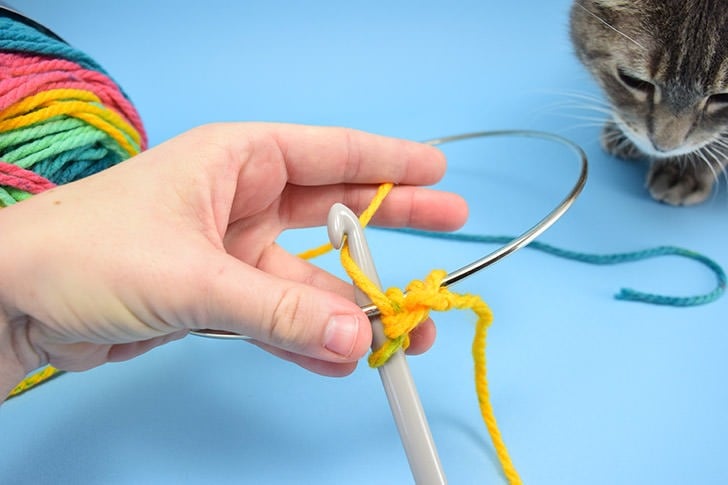 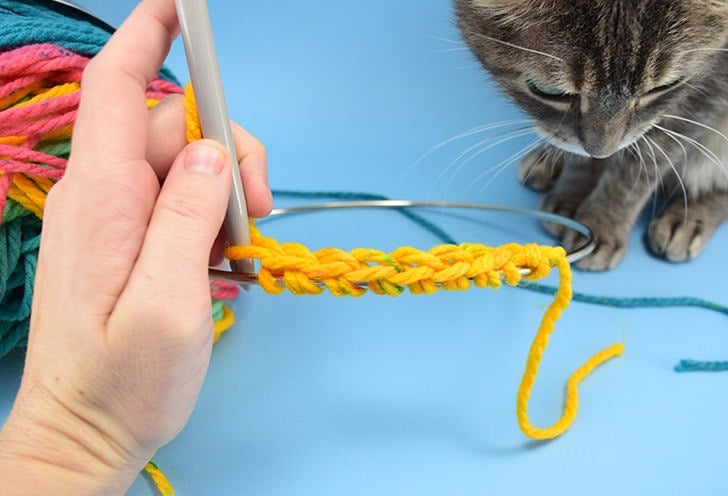 See the “V” shapes along the top there? Those are my stitches all in a row. As you work this is going to twist and move around on the hoop but don’t sweat it. Push the stitches together so that they don’t show lots of hoop beneath but not so tightly that they are jammed in together. 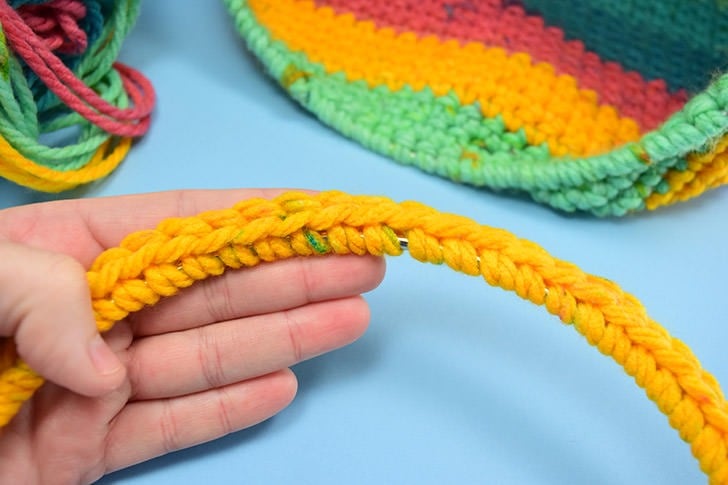 As you work around the hoop you’ll want something like the image above. You can see the hoop every once in a while and that’s A-OK.

Working off of Your First Round 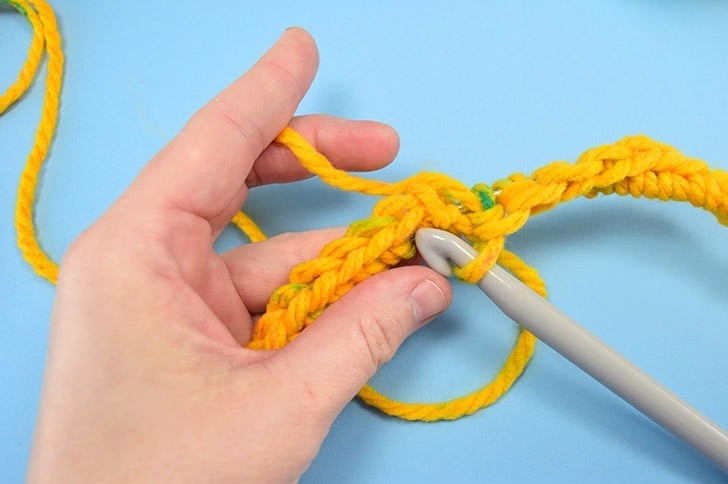 To get some length on our crochet cat sack we’re going to continue making single crochet stitches in our previous round/row. Rather than joining our rows, however, we’re just going to work in a spiral. Normally at the point above you’d make a slip stitch to join the circle into one continuous round. Instead, you’re going to place your hook beneath both loops on the very first single crochet stitch you made. 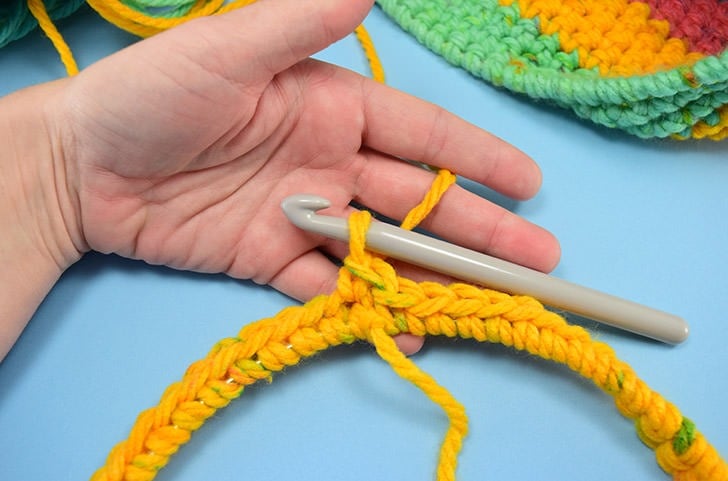 Make  your first single crochet of the next round and then continue making stitches around taking off both loops (the vee shape) from the stitch in the previous row. 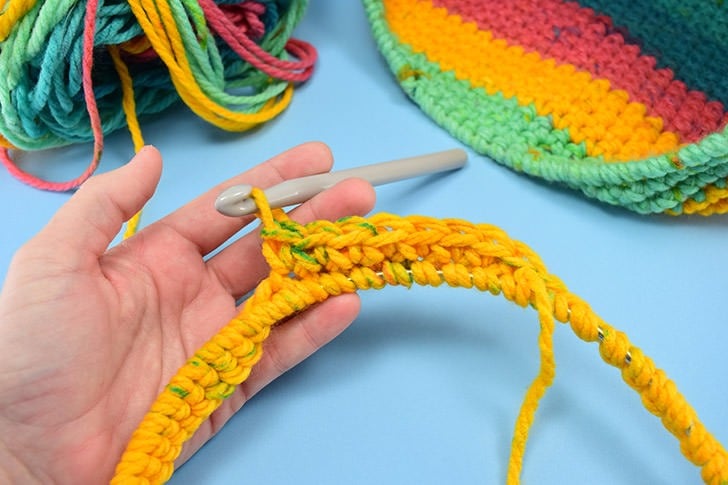 It’s easier :) To keep this baby on auto-pilot so I could watch the entire series of the new Netflix show “Everything Sucks” in a single day because that’s my teenage years, right there, on the screen, I worked in a spiral. This way you just chug on down the line around and around making a single crochet in each stitch you come across, easy peasy. 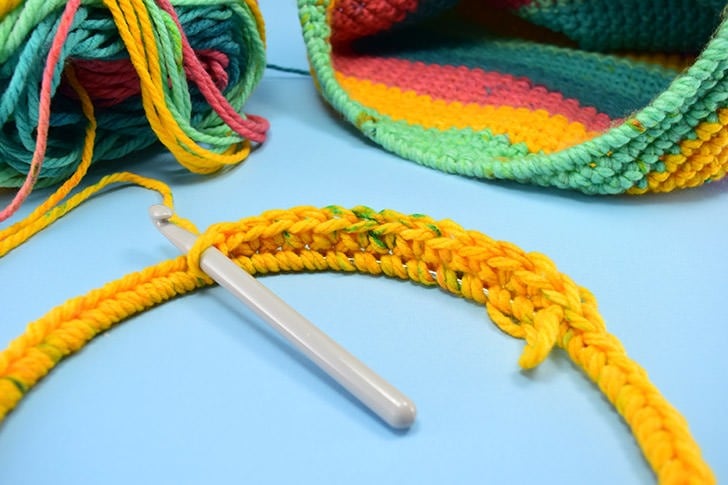 The one thing I should mention is in order to keep your stitches all similar you’ll need to keep them all working in the same direction. Though it’s difficult to tell in the first few pics, you’ll need to keep all of your crochet stitches on top of your hoop. See how it looks like a wall is being built on top of the hoop? Keep your first few rows working like this so you’ll have a nice tunnel shape rather than a flow-y flower-like shape that isn’t necessarily symmetrical and uses more yarn. Trust me on this one, ribbit, ribbit. 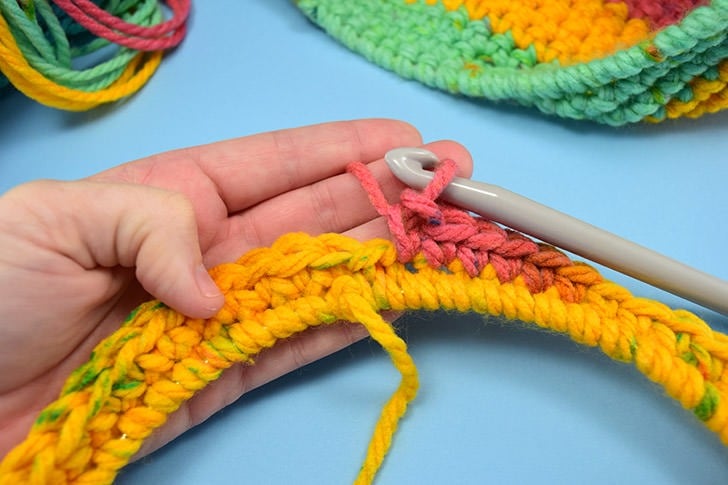 As you move on to the next round keep working in a spiral.

Around and ’round she goes!

As you work once you get a good 6 inches away from the hoop you don’t have to be quite so vigilant about keeping your stitches parallel to the hoop and you can kind of fold the crochet fabric you’re making however necessary so you can comfortably continue working around. 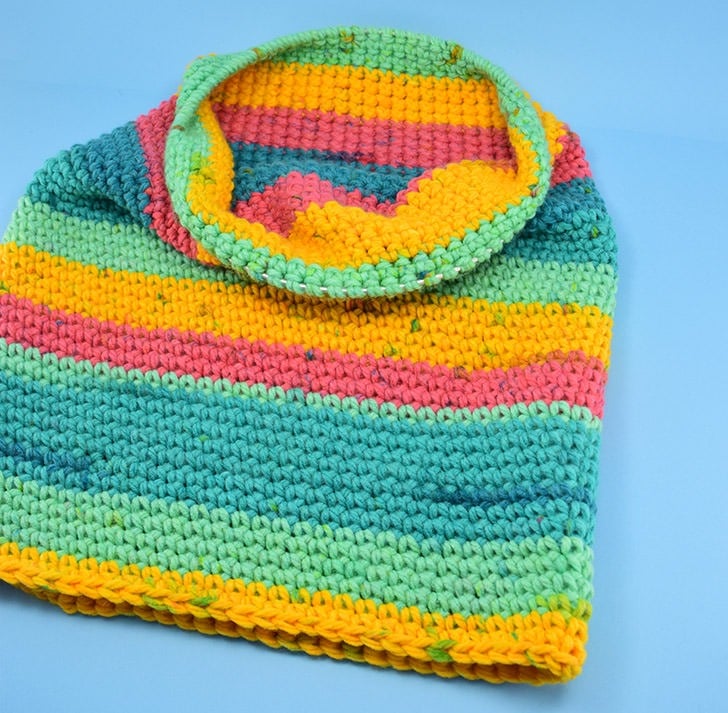 , it’s time to finish this crochet cat sack upOnce you’ve got plenty of length for your cat to get in and hide. FYI – this too 1 and about a third of a second cake I had to run to the store to get. If you use a smaller diameter hoop to begin with, you should be able to get a good length with a single cake. 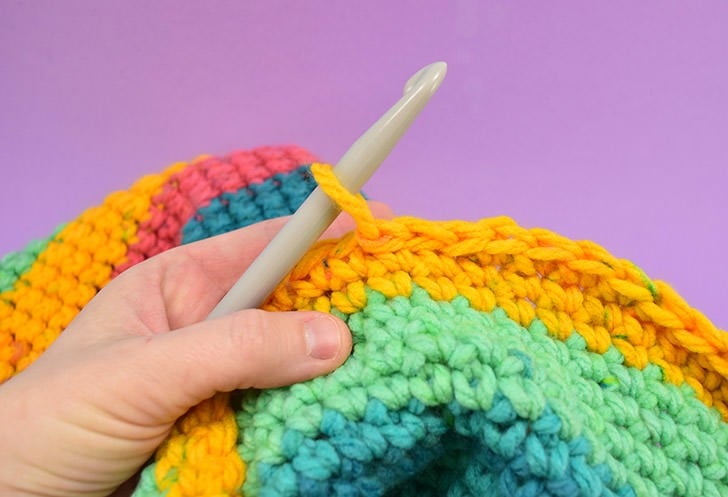 Close up the project by making a few slip stitches to even the spiral into a flat end. Finish by tying the yarn off. Weave in any ends. Alternatively, you can close the bag up so that it’s not a tunnel and more of a cave. I opted to leave mine open, though I’m not really sure why (it wasn’t the plan in the beginning :) 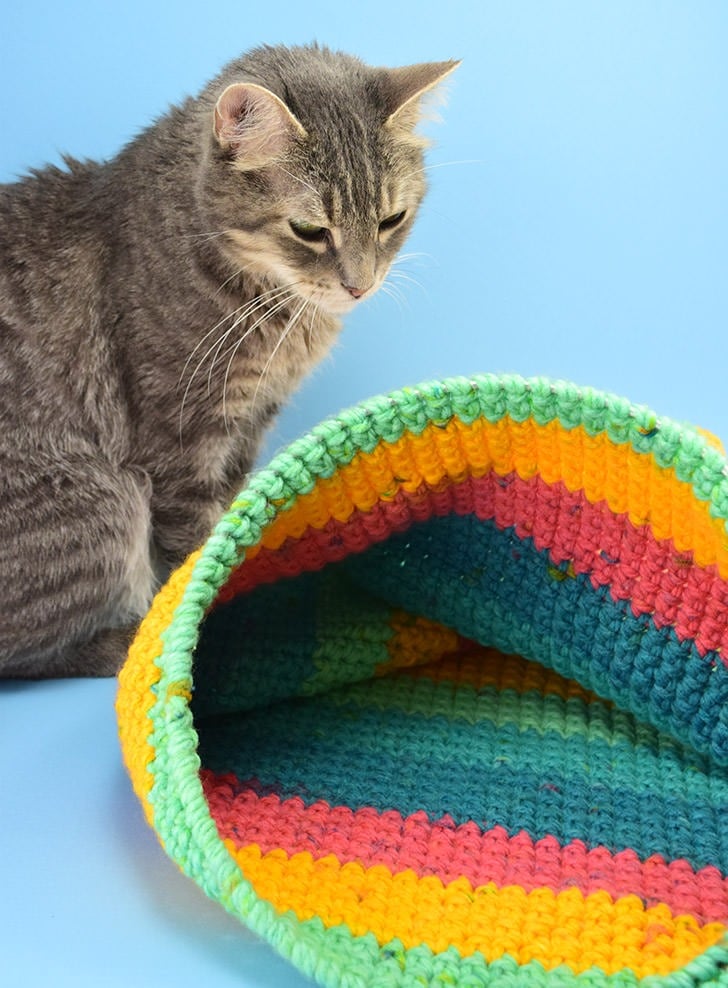 As with anything new it might take some time for the kitties to show interest.

I often will use a little bit of catnip spray to show the cats that my DIY wears were made for them and encourage them to inspect things. 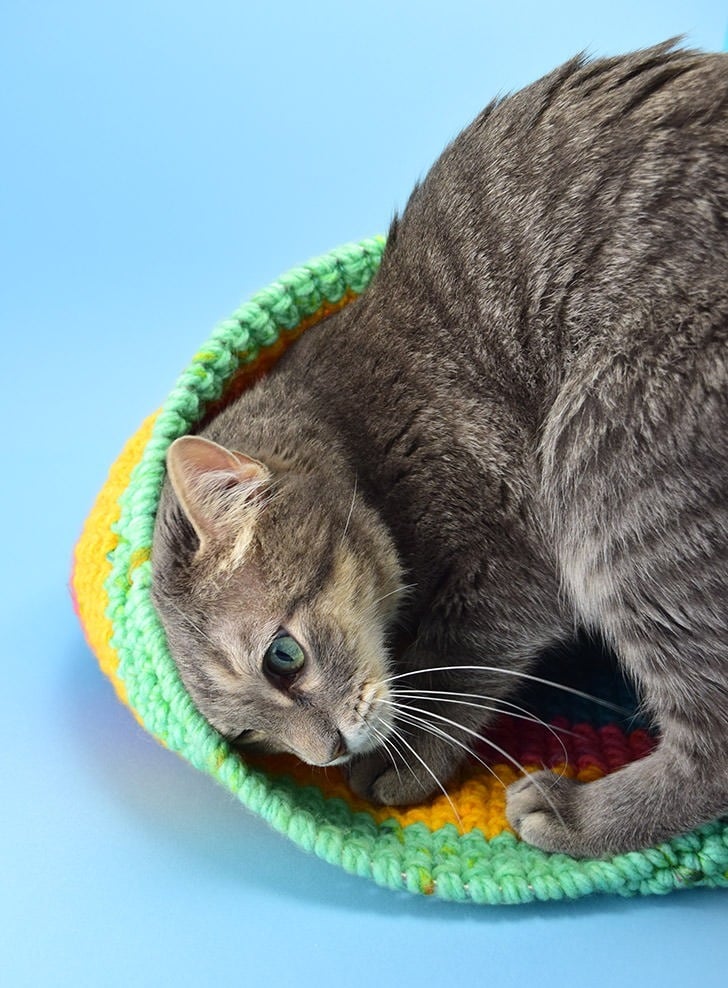 Look there, getting the hang of things, now :) 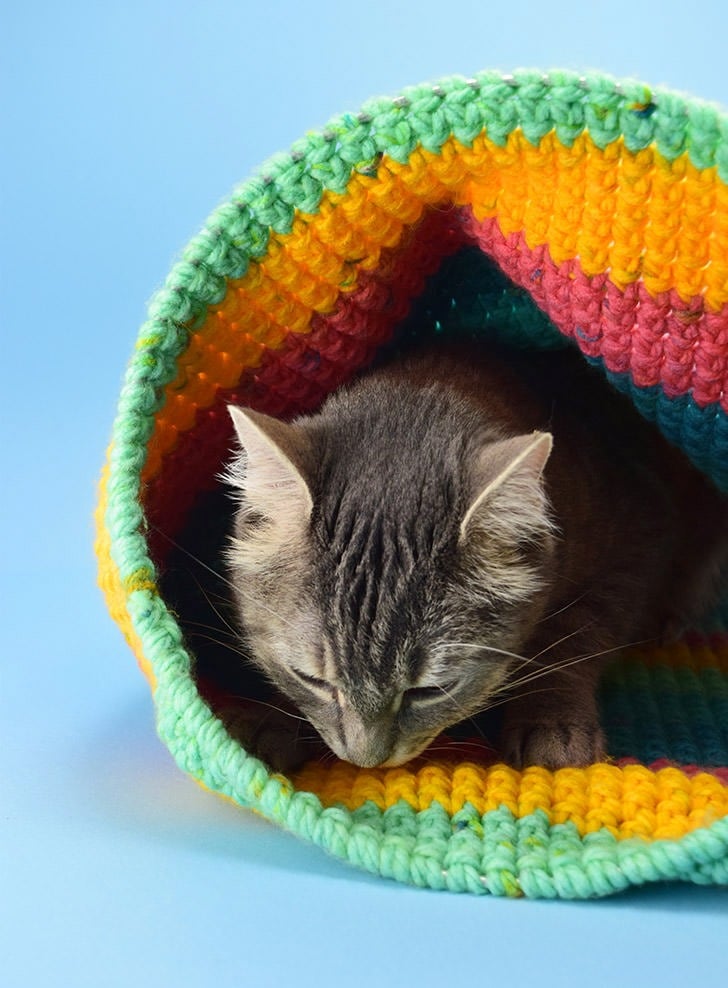 But if kitty decides to just lay on top of their crochet cat sack hideaway at least they’re using it, right? :) 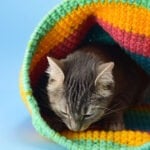 For more help crochet around the hoop, or for more ridiculously cute cat photos, please visit the original post at: https://www.dreamalittlebigger.com/post/crochet-cat-sack-hideaway.html 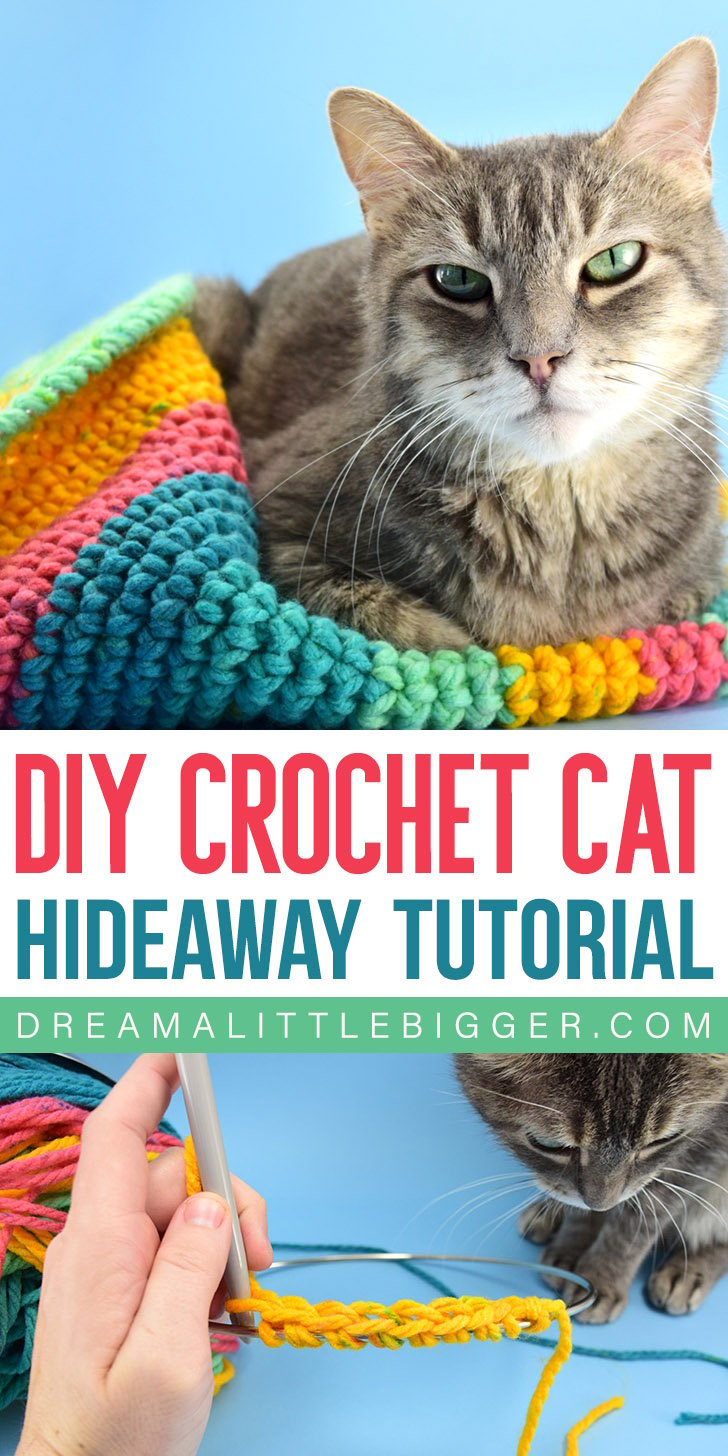