Ollie loves being outside. In fact, he’s been a big fan of the outdoors ever since I got him. I got him just a few weeks before Christmas and while it was still pleasant outside he would lay underneath the big pine by the fence hiding out to bark and scare the dickens out of the cows in the field behind us. The horses, however, frightened him when one kicked the chain link fence in retaliation to being surprised by Ollie’s big, booming bark. I don’t recall him barking at them very often after that :)

And then it got cold and snowy and I found that my Ollie still loved being outside.

Ollie loves the snow! And he needs a new water bucket for outside.

Although I worried about him being out in the cold I could hardly keep him indoors. I suppose he kept himself warm by running around the backyard like a loon :) I swear we went through a good 4 or 5 water buckets!

Ollie loves the mud! Which is great for him because the snow is melting and bad for me because I get to give him a bath every time he goes out to do his duty.#cantbemadatthatface #latergram

A photo posted by Dream a Little Bigger (@dreamalittlebiggerblog) on Mar 2, 2015 at 5:43am PST

And when the snow melted it turned out he didn’t have an aversion to mud. He’s an all terrain and all weather kind of a boy!

So it should come as no surprise that despite the ridiculous South Texas heat, Ollie still wants to be outside. The only problem is that there is no shade in that yard the vast majority of the day and that heat is ridiculous. Just the other day it said the weather was 93 degrees but felt like 114. I can attest that it was so grody outside. I don’t know if I’ve ever smelled as bad as I did after running around hauling huge paintings around in that kind of heat.

It’s got to be hard on Ollie, who is currently quite a bit overweight (puppy food thief) but he insists on staying outside during some of the worst heat of the day and right smack dab in that dang sun. So I decided to try and make ice licks for him to keep him cool. I’d seen them online a few years back and even shared them a little here and there and decided that it was definitely worth a go. 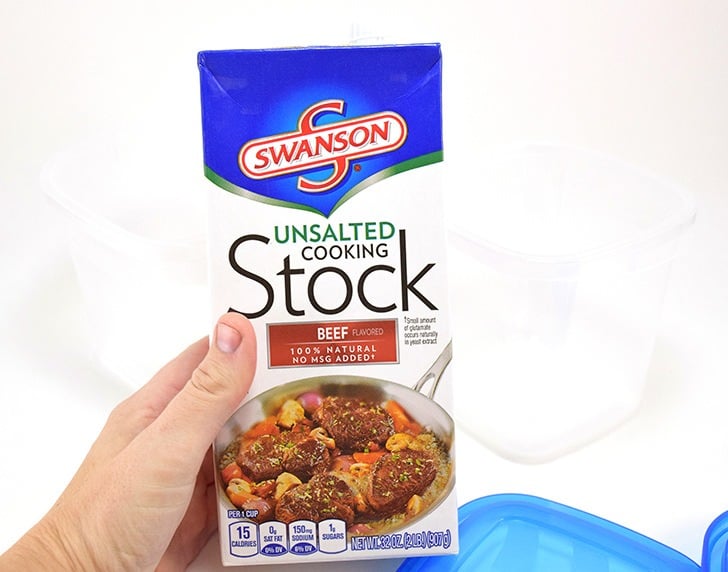 I decided to grab unsalted cooking stock by Swanson after seeing it was unsalted. Now if you compare the 150mg of sodium per cup of the unsalted stock I chose versus the 410mg of sodium for 50% less sodium beef broth or 830mg in a cup of regular beef broth you’ll notice that is a HUGE difference. I figure too much sodium isn’t great for anybody so I’d pretty strongly suggest purchasing this stock though it is a bit more expensive. 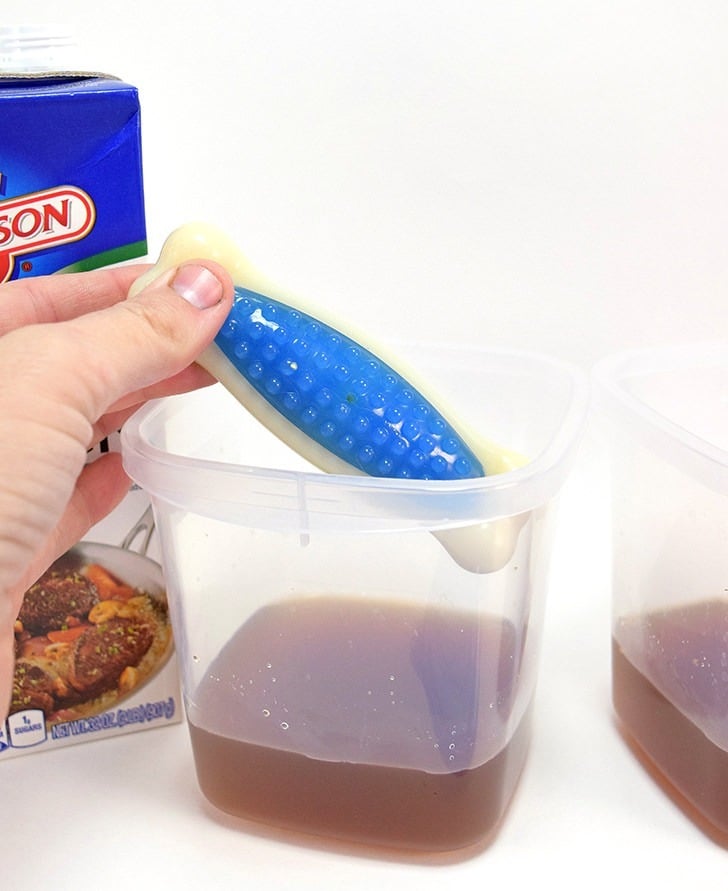 Place a 1/2 to 1 full cup of beef broth into a tupperware style plastic tub with a lid. Depending on the size of your container you can determine how much broth you should use.

Add in a chew toy or other item that won’t get all weird after being frozen and thawed out and add water within an inch of the top of the container.

Toss the lids on and allow to fully freeze. 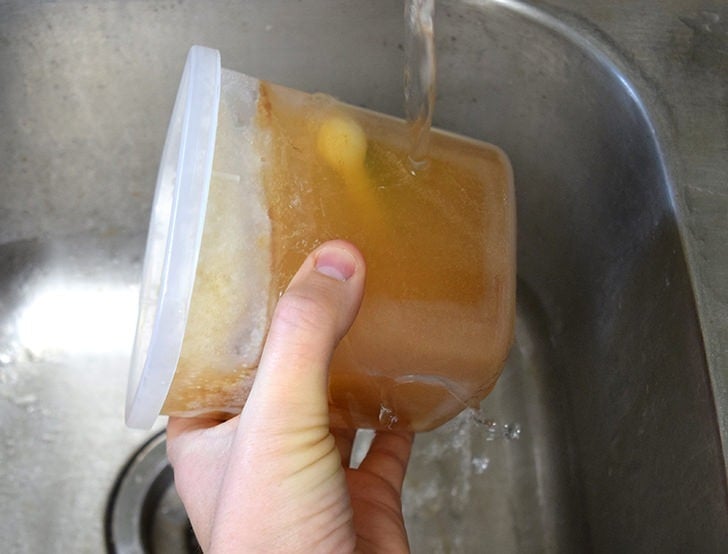 When it’s time to share your treat remove from the freezer and allow hot water to flow over the outside of the plastic over the frozen ice lick. This will help it to easily pop out so you can toss it over. 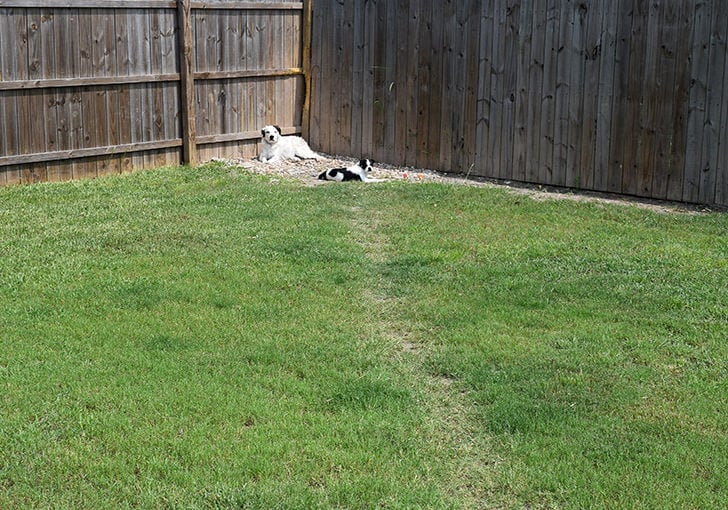 Now I forget that dogs aren’t quite as civilized as people and I presented the lick to Ollie on a plate in the mid-day sun and heat. 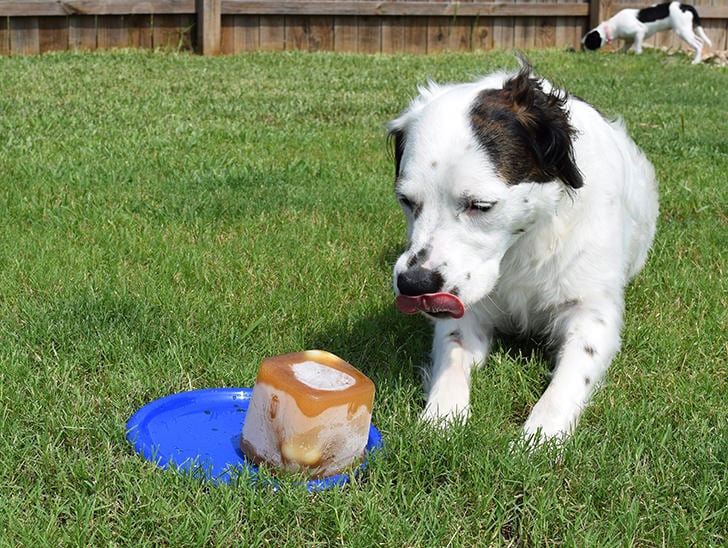 It was amazing because he kept smelling the air and licking his lips but would only go after it after I encouraged him to a time or two. 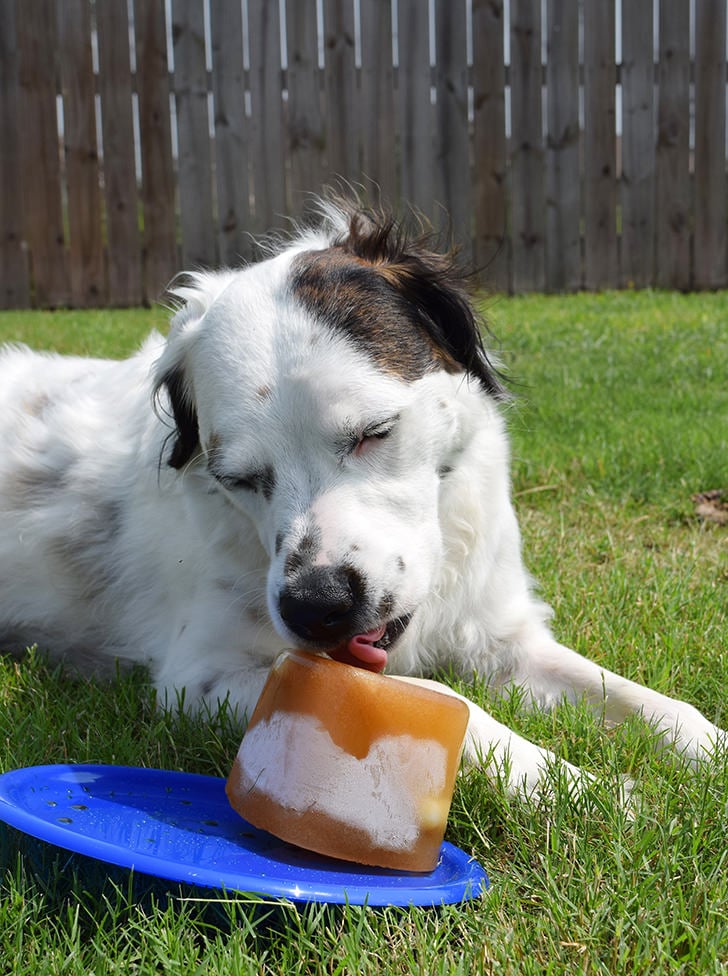 He gave it a little taste… 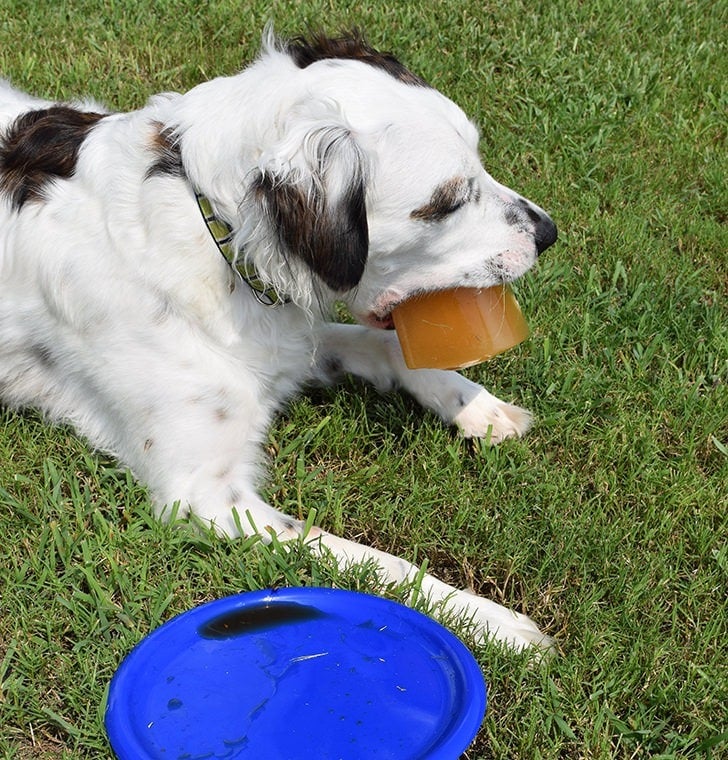 ..and decided to grab the goodies… 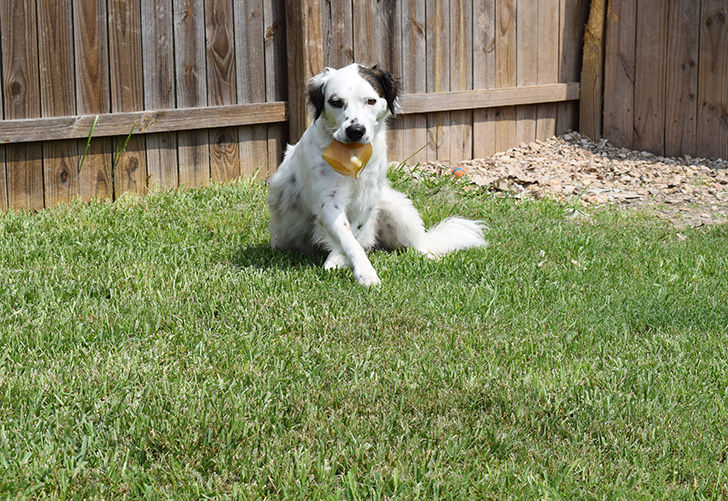 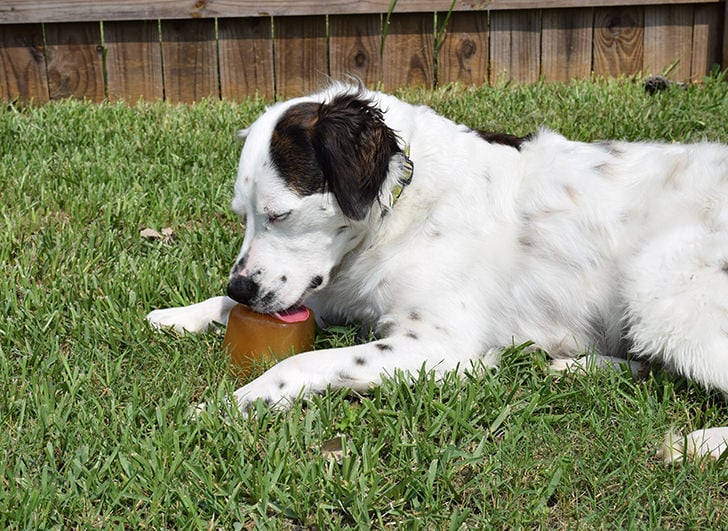 It turns out that Ollie is a HUGE fan of the ice licks and I couldn’t be more pleased. I was able to sit outside with him, me with sweat rolling down my face and neck and he seemed fairly cool and comfortable. 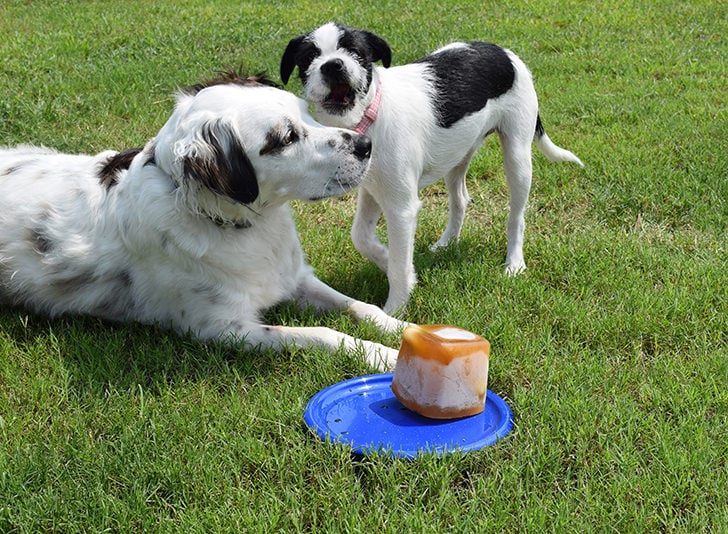 And if you’re wondering I did make one for Little Miss she just was more interested in playing that eating anything so hers went back into the freezer! Maybe beef just isn’t her thing!

Ollie was out for a good while and only took out about half of his ice lick all things said and done. He spent a while trying to free the bone from the ice but eventually left everything abandoned in the corner of the yard. I popped what was left back into the tupperware and tossed it back in the freezer for him to get after again.

With as much as it seemed to help him with the heat I think this is something I’ll continually keep on hand for when he really wants to lay around outside in that sun but the heat is very strong. 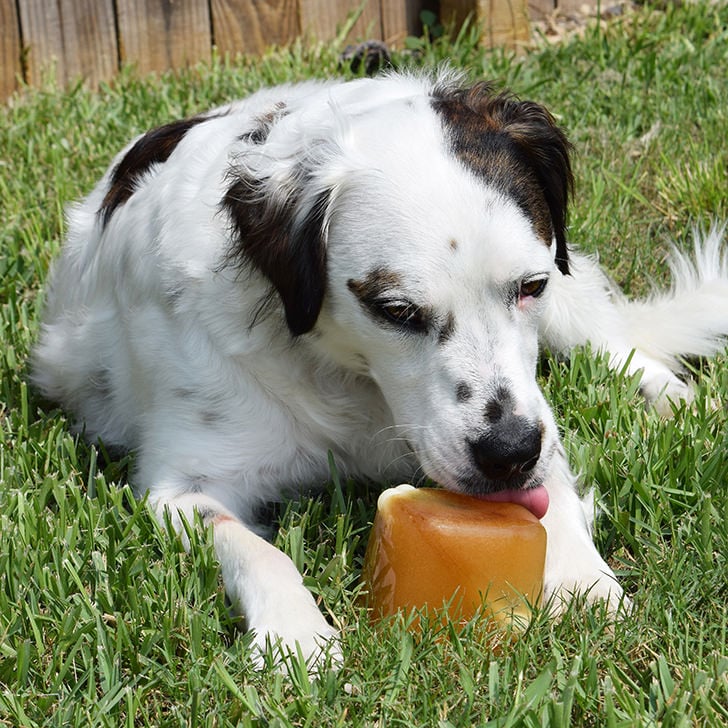