I get bored super easily. And it seems as though my kind of bored isn’t the same as the boredom of others. It was recently explained to me that somebody has such terribly, horrible time with boredom and they are quite lucky that they don’t beat their head on a wall just to escape it. Later I saw this person sitting and watching television and even though they seemed to be having a good ol’ time I thought, HOW BORING!

I can’t really watch television, not like that, at least. Whenever the TV is going I more listen to it than actually watch it. Normally I’m actually watching my hands as they crochet, work my knitting loom, write lists and keep up with work or any number of things, really. I’ve tried to just sit there and be calmly watch TV but it just doesn’t work for me. Oddly enough, I can totally watch a movie in a theater, though. I guess it is the whole consuming in the dark experience that makes it different for me.

Over the past few months I’ve made a TON of loom knit caps (need the basics? Get the tutorial to e-wrap loom knit a cap in both photo and video tutorials!) and I started to get bored and I wanted to figure out how to mix it up… It literally took me forever to figure out changing colors of yarn on a knitting loom. I tried lots of things, and some ways I found online but then finally I figured this business out while “watching” a new show called “Z”. FYI, because I think it’s gonna be one of my new tv jams, it’s on Try Amazon Prime and it is about Zelda Fitzgerald, the original flapper, wife of the author F. Scott Fitzgerald, an artist and painter. I tell you she was such an interesting woman though I’m only on episode 3 so I don’t know if that business above I discussed is covered in the series but it is awesome so far! 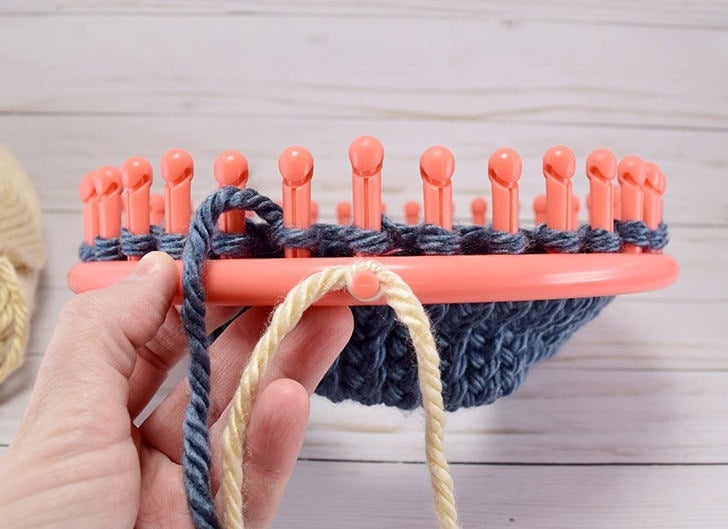 When you’re ready to change colors be sure you’ve taken off the second loop and knitted all of the way around the loom. You’ll have only one loop one each peg. Grab your second color of yarn, and just like we do when beginning a project on the loom, tie a loose knot (or make a slip knot) on the side peg.

Snip the old yarn off of the skein leaving a tail of a few inches. 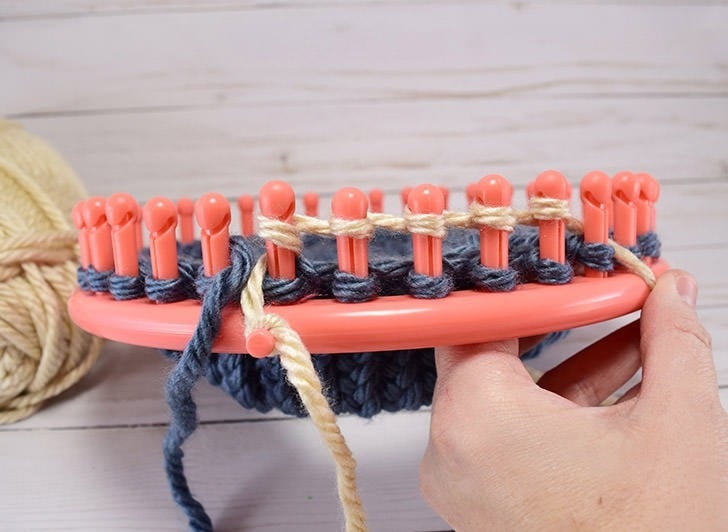 Start e wrapping (or whatever your knitting method is) the new color of yarn around the pegs. 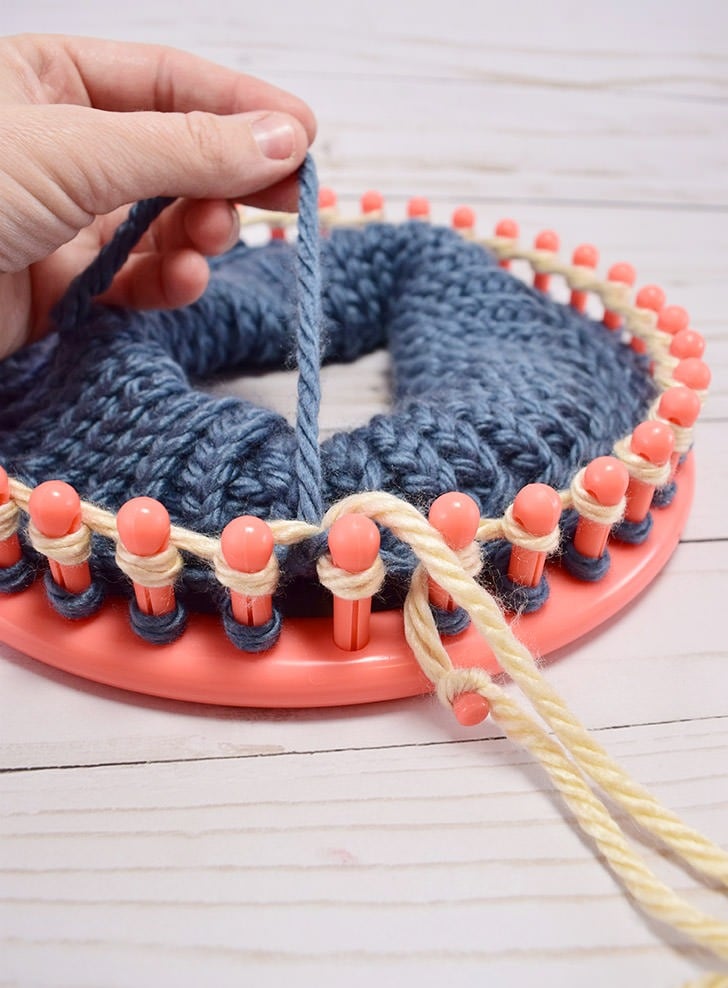 While keeping your tail of the first color held taut, knit around the loom just like you would normally do. 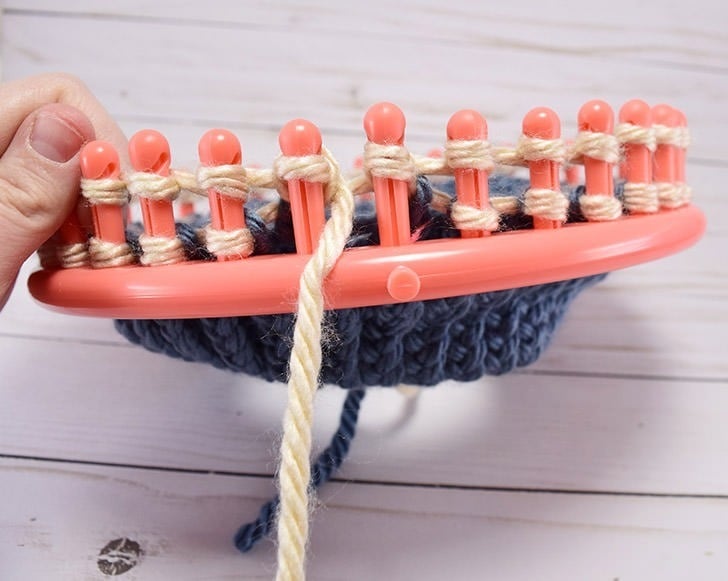 Now in my first few color change projects I got the number of rows off here and there. This is largely because I didn’t realize that the very first time you knit over the new color, you’re still using the OLD color meaning that row will still be the OLD color. It’s not until you have the same color top and bottom on your pegs that your new color will actually start in the design of your project. 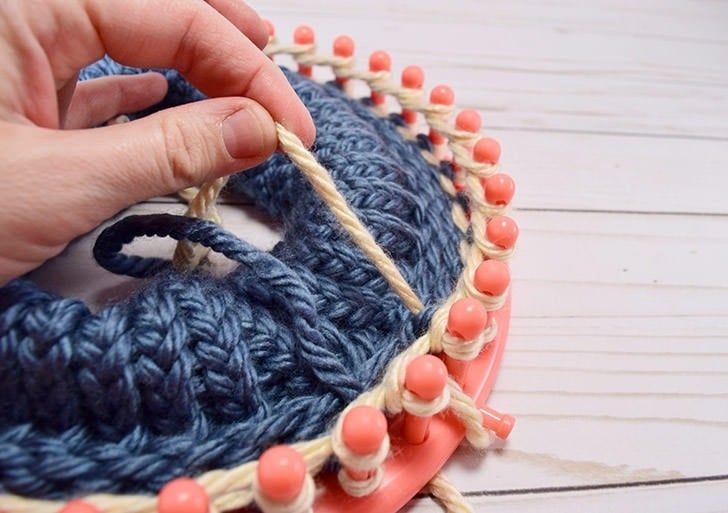 After you’ve gone around the loom a time or two remove the new color from the side peg. 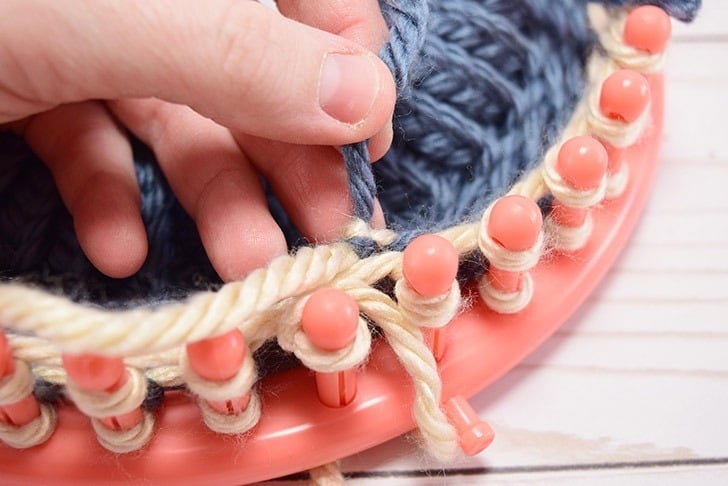 Next tie a knot with the tail of the former color and the side peg tail of the new. This can be a simple somewhat loose overhand knot twice over. There is a learning curve but if tied too tightly the join looks funny and then you have a problem with really tight knitting. Leave the tails alone and once your project is complete weave in the ends and call it good!

If you’re wondering, no you’re not experiencing déjà vu. Remember this guy? This hat is the same one I used for the making a loom knit cap with a brim tutorial!

After making like, 12 knit hats and getting bored, I’ve found that changing colors makes it interesting again. Heck, I even made a rainbow hat that I’ll share with y’all here in a bit. So if you’re into loom knitting and want a way to mix things up or if you want to learn how to loom knit, this simple way of changing colors is perfect for any skill level. 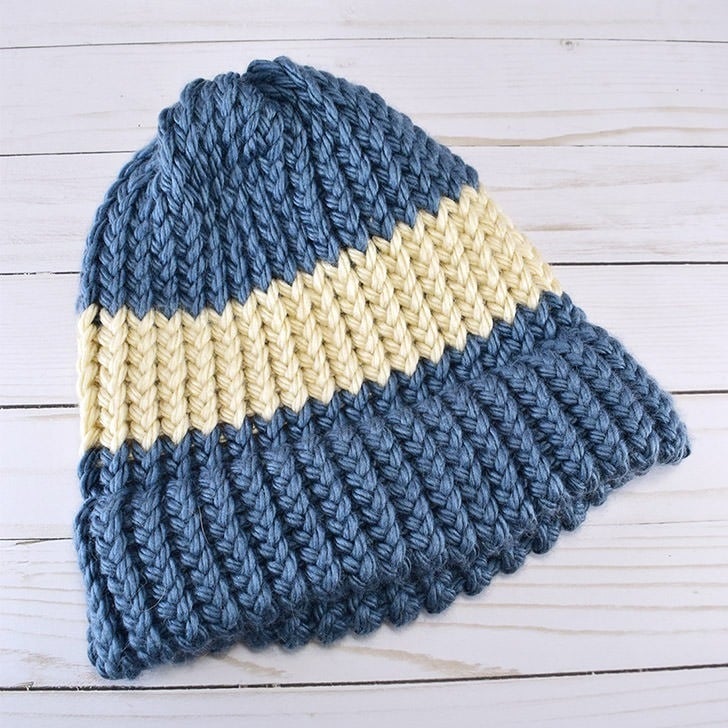