Naturally gluten-free, these apple cinnamon meringue cookies are a great sweet treat and a lot of fun to whip up! Light and crisp, they aren’t your typical cookie and we bet you’ll have everyone begging for the recipe!

So I kind of have this ginormous thing with The Great British Bake Off. Rob and I first tuned in when we saw Noel Fielding on the preview on Netflix because I’m a super huge fan of his. Really loving the series, we decided to just keep on watching them to the tune of at least 1 a night for weeks now. It’s kind of a big deal because Rob doesn’t binge watch anything. Except for American Horror Story while I’m out of town, apparently, because there is no way that business is playing on the screen at the same time in the room. No freaking way. No freaking how. Nope.

Watching the show is really interesting because they have a ton of things that we’ve never even heard of like, for instance, Bakewell Tarts? We had no clue what such a thing was, but after watching them be made we were OBSESSED with actually tasting one. Well, I’ve got Miss Mary Berry’s Bakewell Tart recipe and I’m going to try and make that sucker gluten free :)

Watching the show is also super frustrating because being gluten-free, I can’t have half of the stuff we see on the screen. But I’ve been doing without the gluten-stuffs for a while now and I’m used to being the only gal in the crowd without a piece of cake. I mean it still sucks sometimes, especially with this insane sweet tooth I have, but it’s just the way it is.

When we do see something that I can have, just because, we make that business up quick smart and then have a treat we dig into while we watch the series. It goes something like this… “GBBO finale tonight with buttermilk pie!” We wait until the last challenge and then feast on our homemade sweets while we each make our guesses who is about to be crowned the winner. 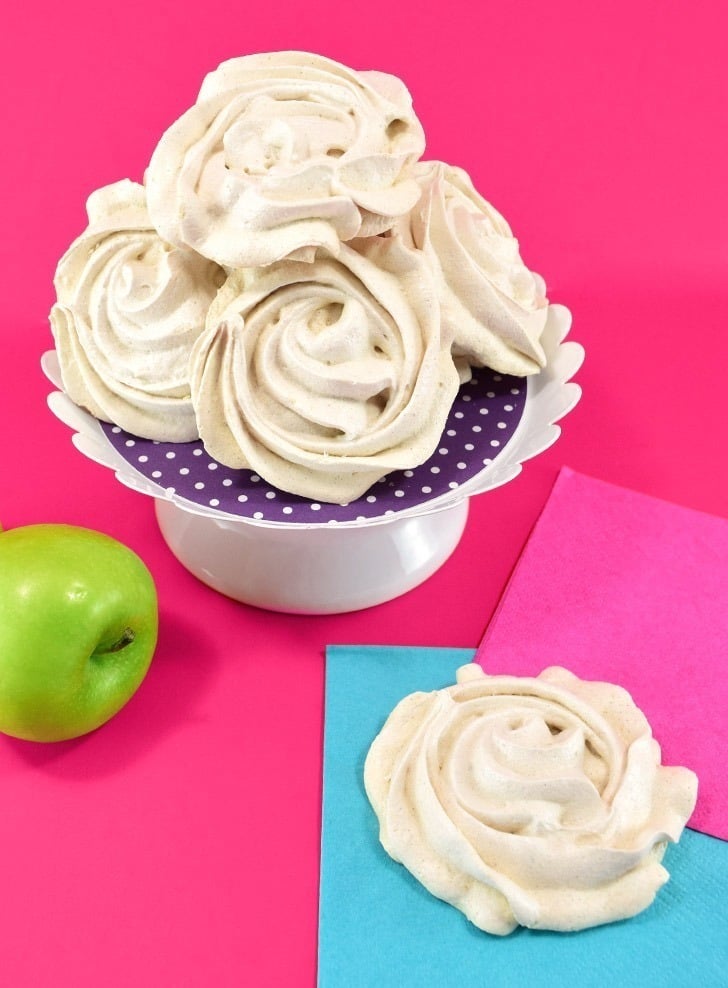 One of the things we saw were meringues. Like, I’ve had it on top of lemon MERINGUE pie, but just by itself? What? I mean, we call the top of the lemon meringue pie “cow slobber” in my family. It’s the thing that YOU SCRAPE OFF of the good part of the pie. Why on earth would you eat that goop alone? But hearing Paul Hollywood talk about the perfect cracking sound cutting into a pavlova, which is basically a cake made with gigantic meringues layered with fruit or custard or other stuff, I realized that these weren’t chewy or gooey or goopy, they were light and airy and crispy. Ooh. This was happening, like, now.

Unfortunately, my first batch of meringues was a disaster for a lot of reasons. My sugar was too big, I guess because it wouldn’t dissolve for anything and my cookies were gritty. They were also flat and barely held the definition of the shape I piped because I overwhipped them and they fell. Oh, and they tasted like toothpaste. I straight up put TWO DROPS of peppermint flavoring into my very first batch and that business was so overpowering that it tasted like toothpaste. Not even playing. It. Was. Gross. And my stupid Silpat mat STILL smells like peppermint when I bake on it (though the flavor doesn’t transfer, thank goodness) and every time I open the oven my eyes BURN from the peppermint coming from the oven. It’s nuts, y’all.

Since I get obsessed with things, and my thing right now is a baking show and meringue cookies, I’ve been making a TON of these guys. Some are winners (like these apple cinnamon meringues) and some are losers (like those peppermint toothpaste meringues) but because I am obsessed I’m going keep on trying out a bazillion flavor combinations and having a fun time doing it. By far, so far, these apple cinnamon meringues are my absolute favorite. After the peppermint debacle, I decided that NATURAL flavoring might be the better way to go and so I dug through the pantry until I found 3 snack packages of freeze-dried apples. They weren’t my first choice, but they were what I had on hand and I was going to whip these up RIGHT NOW so apple it was! And, oh my goodness, did this ever work out well.

These apple cinnamon meringues are super sweet with a nice tart bite to them from the apple. And the little bit of cinnamon is enough to give you a spicy kick without a ton of heat. It’s kind of like apple cider in a crispy, crunchy form and I can’t get enough of them. Want to learn how to make them? Let’s go! 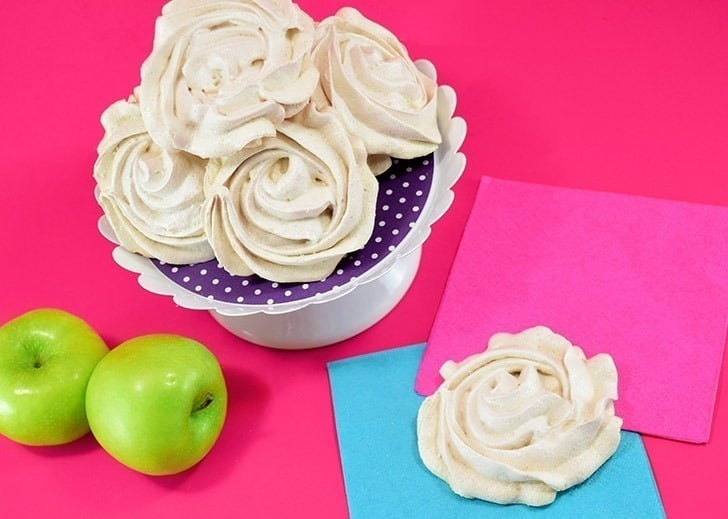 Be sure that your equipment is super clean because any trace of oil on your beaters, bowl, or whatever can weigh down your egg whites preventing you from getting enough air in them to get the stiff peaks you will need. It’s also a good idea when separating your eggs to remove that white opaque part, only using the clear goopy part of the egg, again to help whip those egg whites up to nice and fluffy. This recipe takes a long time and requires patience. My best advice is to NOT cut corners and try to speed things along. You’re just going to waste your ingredients if you try. 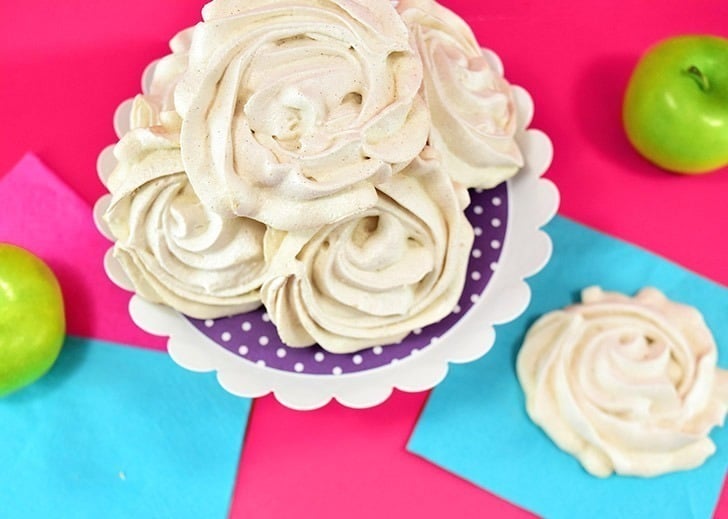 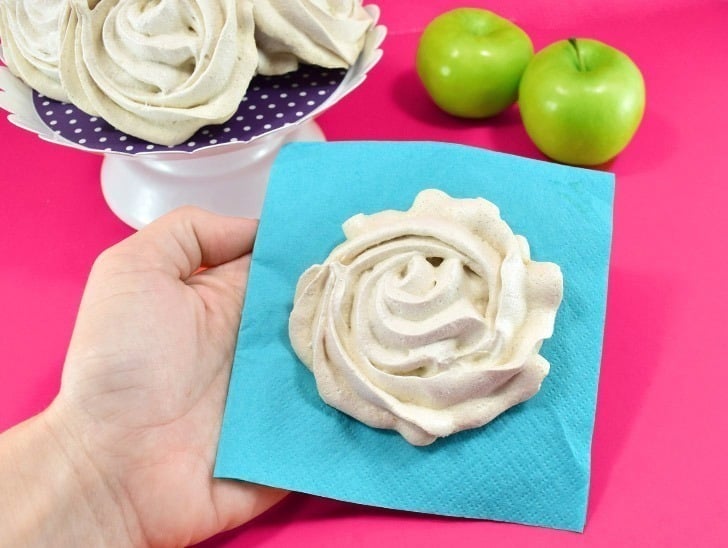 Ooh, and if you’re wondering why I like the Wilton 2D nozzle for meringue cookies, this pic above is exactly why… Starting from the center working around and around until you get the right size, pipe frilly circles that look like a rose. I mean, that really, really looks like a rose, right? So cool!

Always place your cooked meringues in an air-tight container to prevent them from getting sticky. They’ll quickly suck up any moisture from the air and quickly become wrecked, otherwise. If you find that your cookies have become slightly sticky, you can revive them by placing them in the oven, turning it to a low temperature, like 170° and turning it off as soon as it finished pre-heating. Leave the cookies in for 20-30 minutes, or until they become crisp again. 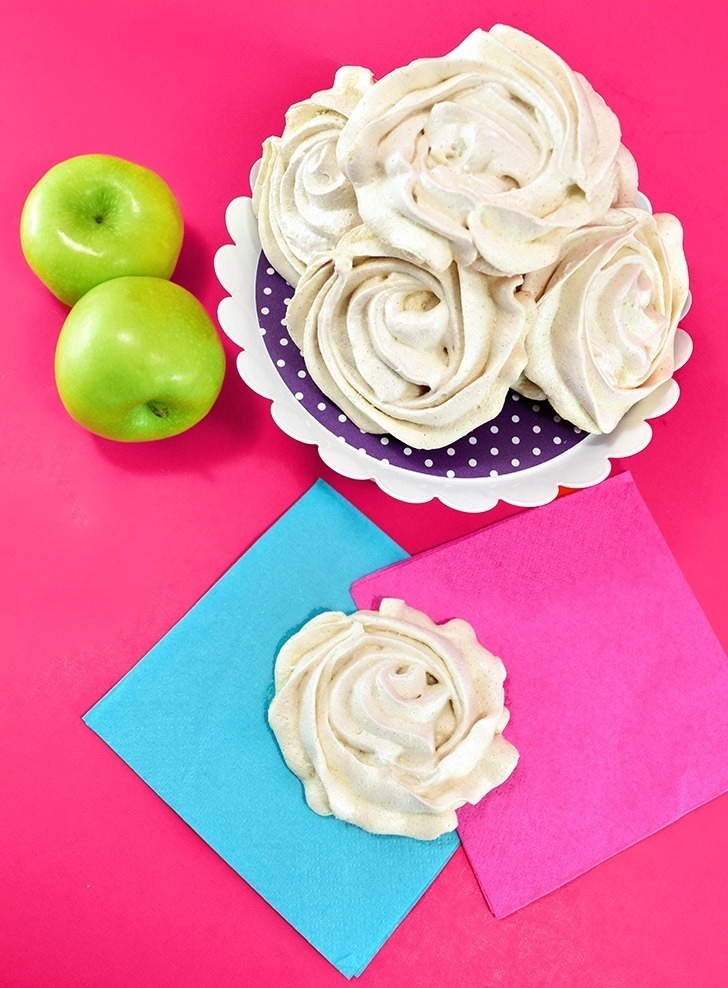