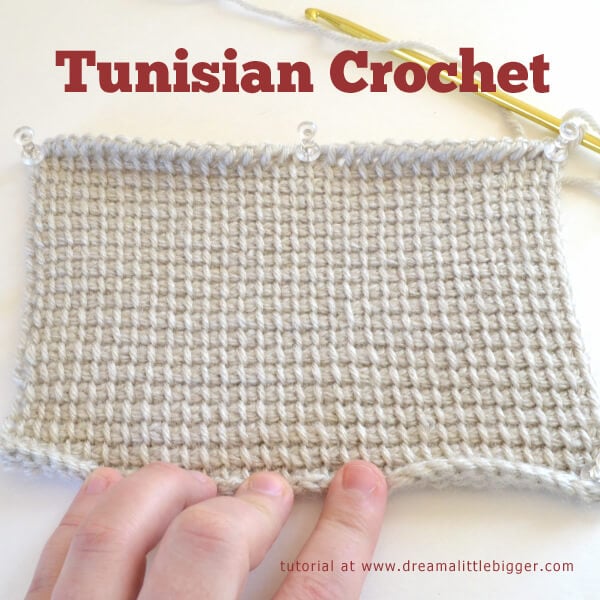 Today I’m keeping on with the theme of crochet patterns that I began to love after I wanted to make my hooked items look less like crochet. When I had first seen the Tunisian crochet stitch I was hooked (pun intended!) and when I saw the hook I got to use I was doubly excited. 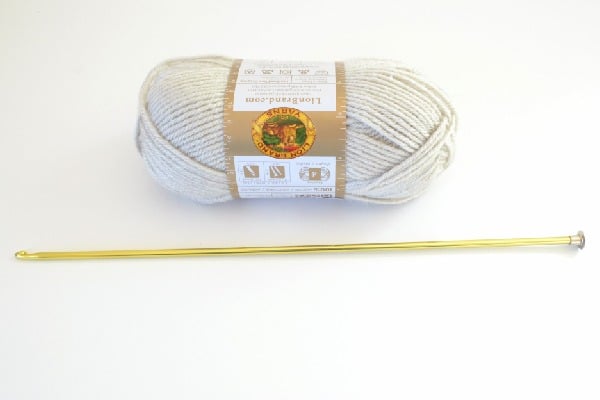 Yep, that up there is my Tunisian crochet hook. This tutorial came up most organically as Russell came in to a sick ol’ me in bed and said “I found this huge ass crochet hook under the dining room rug”. In which my response was, “bring me some yarn immediately! Um, please?”

When buying a Tunisian crochet hook you should use a size or two up from what you would normally use. These days I favor an H hook but back when I first bought this (my only Tunisian hook) I was more of a g-gal. As such this hook is an H which worked out just as well but I could have used an I hook more comfortably. But since there weren’t any more of these suckers under the dining room rug I used what I had! 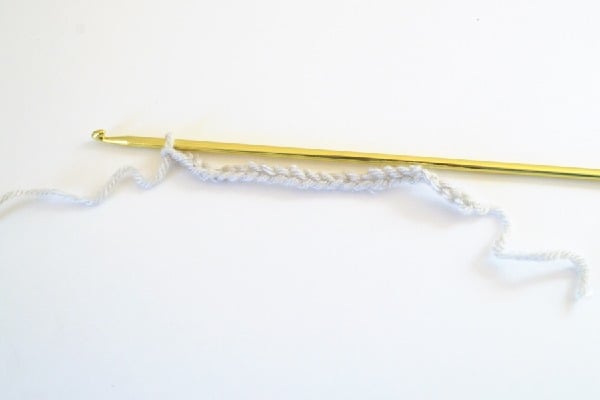 As with all things crochet, first start off by making a chain the length you desire or your pattern dictates.

Insert your hook in the first loop on the BACK end of your chain. 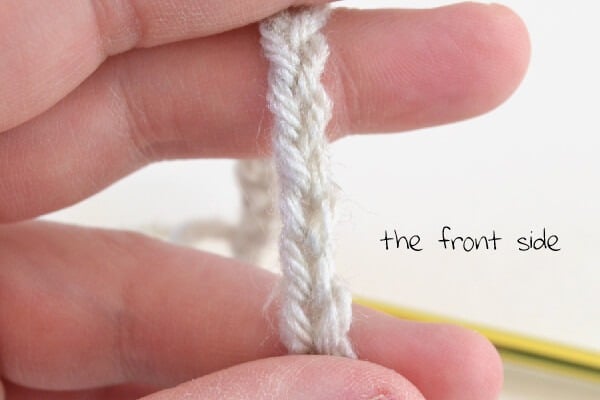 In case you are wondering, the front is the shape that looks like Vees repeating. 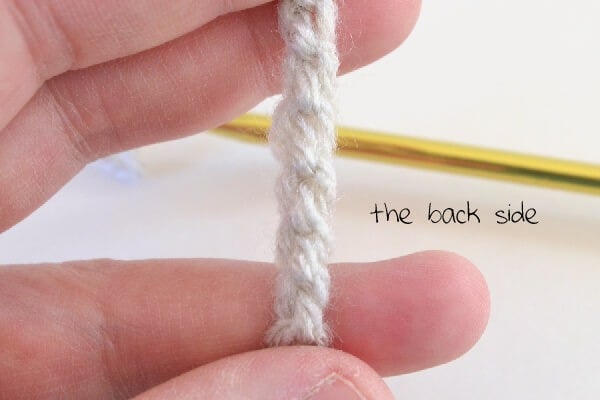 The backside looks like three threads with the one in the middle being raised, kind of like a triangle. That one raised bit is where you’ll insert your hook.

Now, I’m not going to lie… starting this pattern is a royal pain. I mean I hate it so much, but the actual crochet part is so much fun that I do it anyway. Getting the hook into the backside is unfamiliar and awkward. But suffer through it and you’ll be rewarded with a totally fun new stitch, I promise!

Now where were we?… put your hook into the first loop on the back side of your chain. 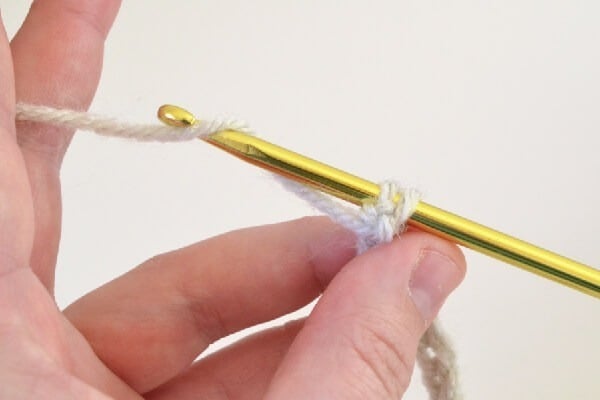 Yarn over and pull through the first loop. 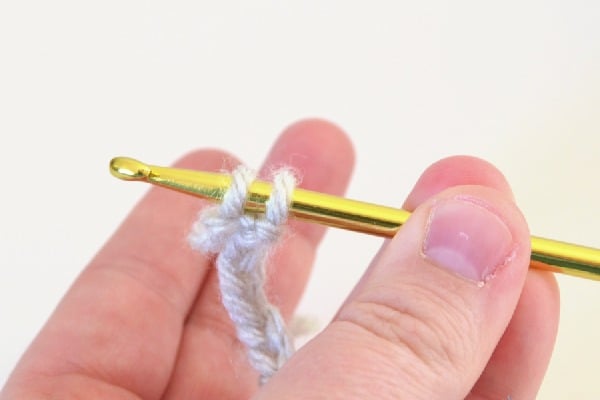 Now you have two loops on the hook.

Continue to insert the hook through the next loop on the back end of the chain, yarn over, pull through the first loop. Now you’ll have three loops left on the hook.

Continue down the full length of the chain. When you get to the end, chain once. 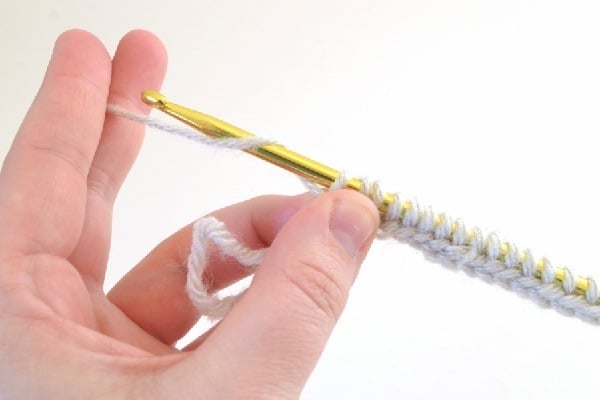 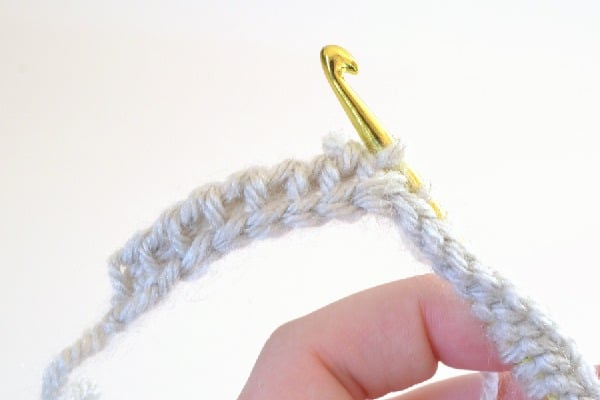 Continue pulling through two at a go until you reach the end of the chain. 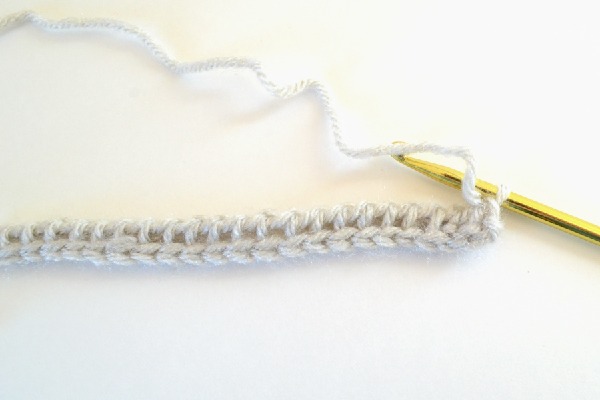 And your foundation row is complete! 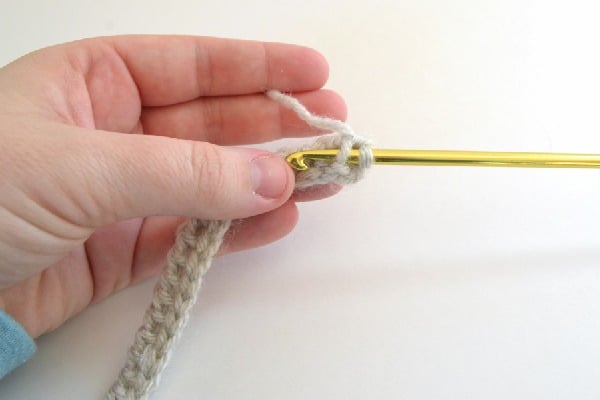 Now on  your foundation row you’ll see lines where the yarn goes over in a horizontal fashion over and over again. Insert your hook into the first horizontal bit. 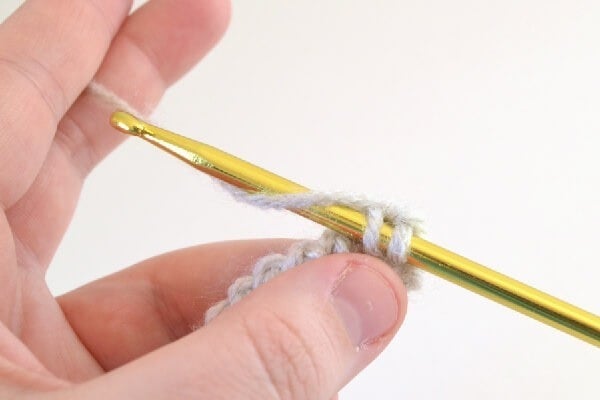 Yarn over and pull through the first hook. 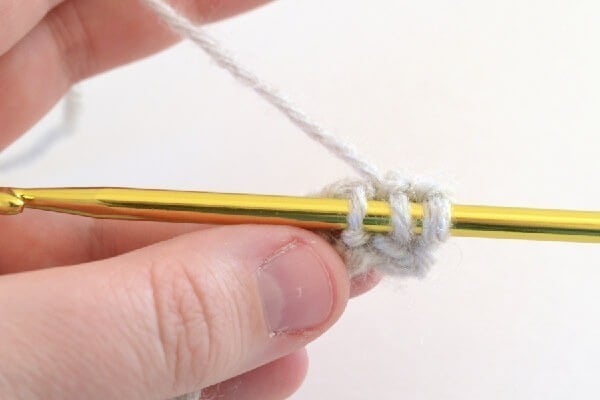 Continue the pattern by going under the horizontal bits, yarn over and pull through the first loop.

This is just like what we did with the foundation row, but getting the hook through these guys is SO much easier and crazy quick! 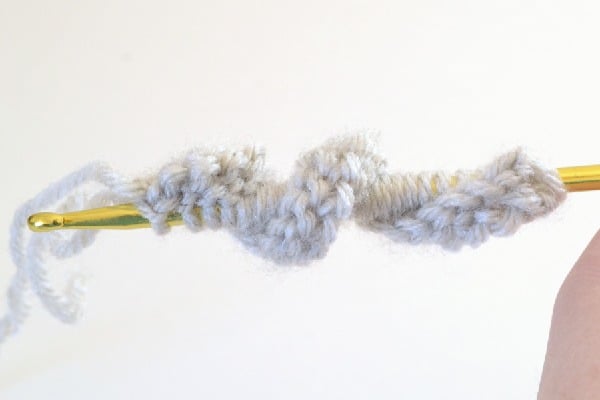 As you continue to work down the length the piece will coil up on you unless you keep straightening out. 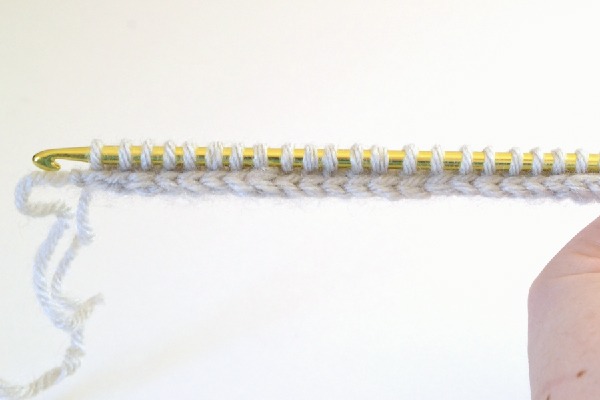 I guess I’m a lazy hooker because I leave it to the end. But can you see how it looks just like it did the first go?

And because we worked into the back side of the chain you see the pretty “up” side of the crochet on the end. 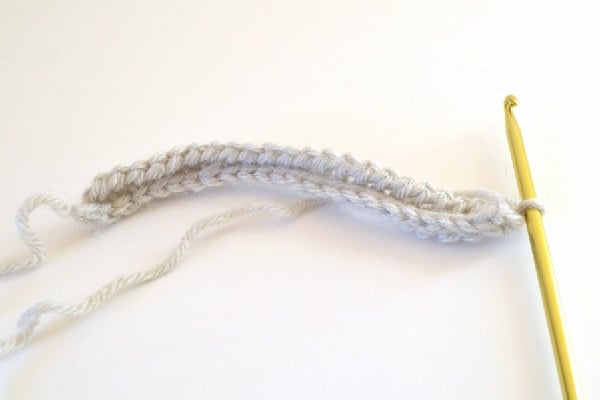 Just like before, yarn over and pull through two loops on the hook at a go until you reach the end. 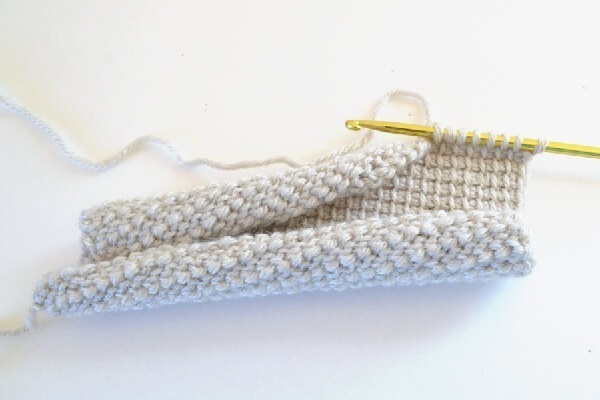 And keep repeating the pattern, going through the loops on the front side, yarn over pull through the first loop leaving a new one on the hook.

When you get to the end, yarn over and take off two loops at a time until you reach the end. 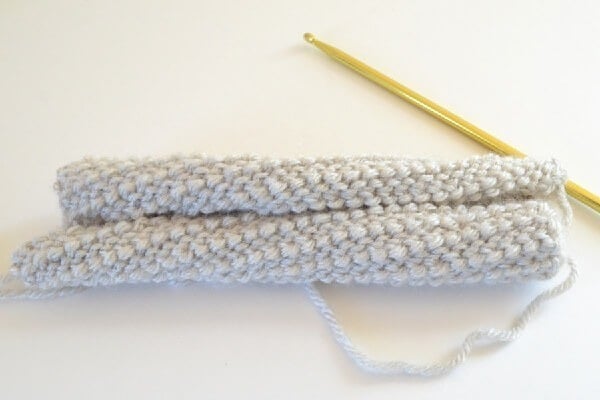 Now this particular stitch curls up like CRAZY while you’re working it so be prepared for that. This is definitely one crochet fabric that is going to require some blocking. 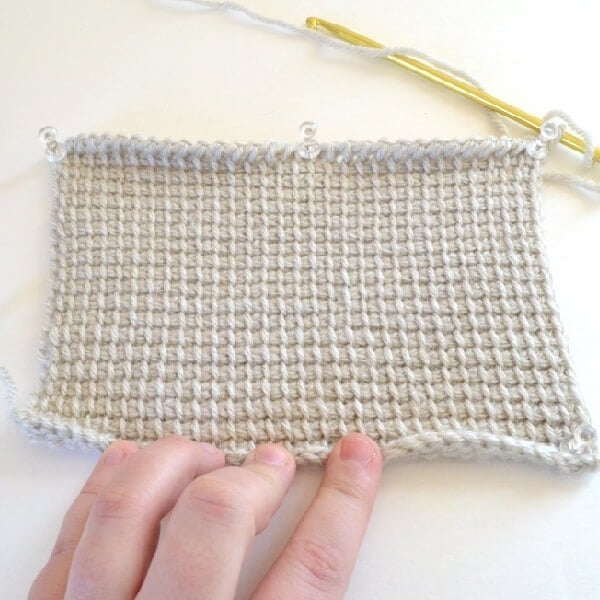 When I want to see the fabric to make sure it is coming along well, I’ll tack one end down with some thumb tacks on a piece of foam core or wood and roll it out so I can see everything equally well. 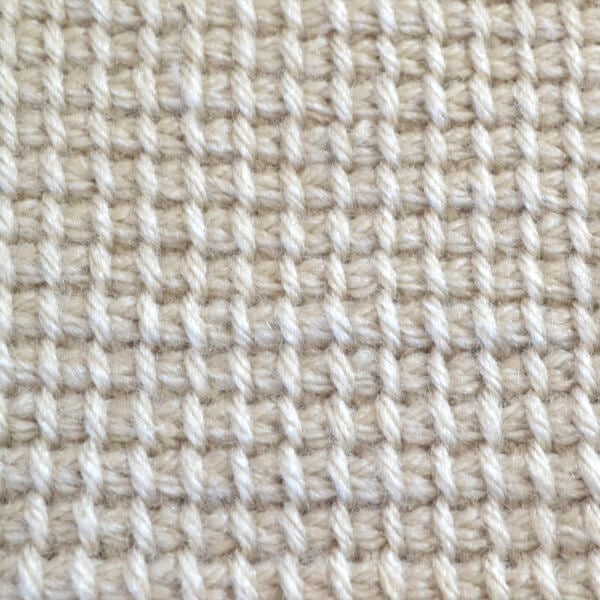 And this is the weave of the front once completed. 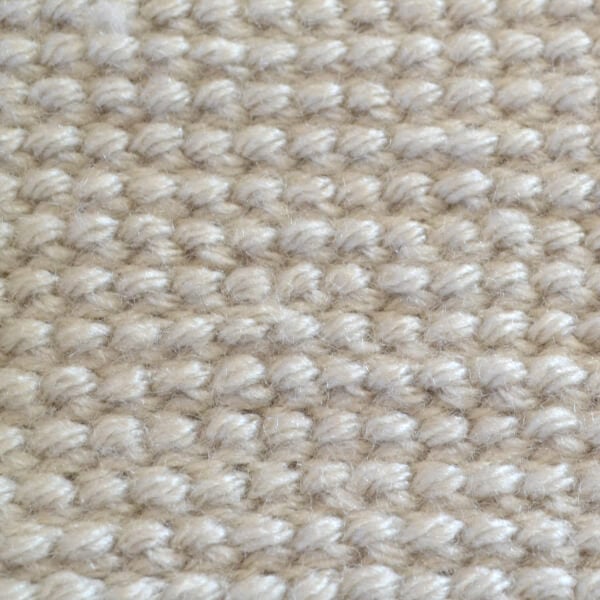 And this is the back, which is quite bumpy making this a great stitch for wash cloths!

Well, this has been a long one so I’m going to sign off, but now you know what to do with those “huge ass” crochet hooks and hopefully you’ll love the process of the stitch just as much as I do!