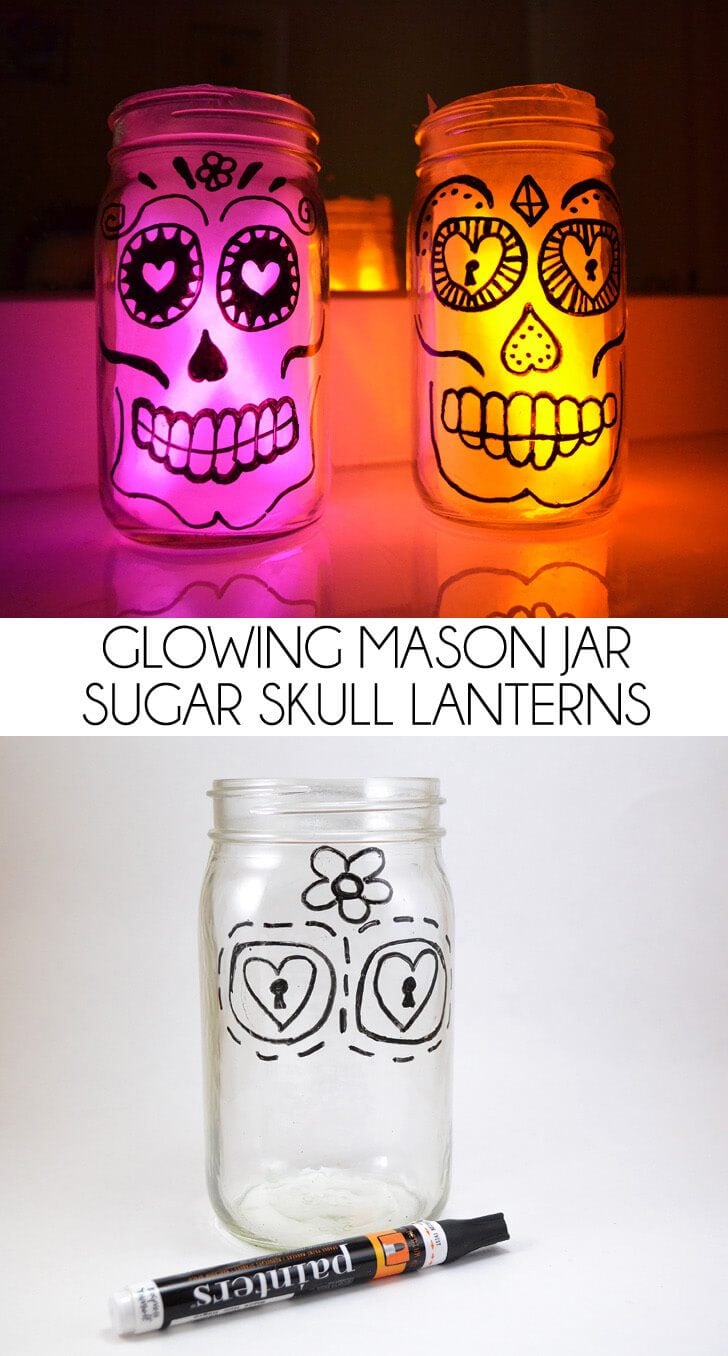 In case you haven’t quite noticed yet I’m all about sugar skulls for Halloween 2015. I love the hand drawn charm and all of the little ways you can incorporate hearts into them! My sister loves them too which is all the more reason to craft up a ton.

Noticing that I had an awful lot of glass jars doing nothing more than taking up space I’ve challenged myself to start using them in my crafting. This little project was an easy enough to come up with concept but when it came down to the execution things wavered a bit. Isn’t it amazing how things don’t always turn out in real life the way you expect them to in your head?

In the end I wound up spending like $12 on glow sticks and lights trying to make this work but finally it did. I’m so excited because they wound up looking amazing! Now this isn’t an every night kind of decor because it does use glow sticks and those things cost money. But if you want some super cute decor for the evening of Halloween, I’ve got you covered. As an added bonus after the fact (or even currently) these jars can be filled with candy for another type of decor and storage! 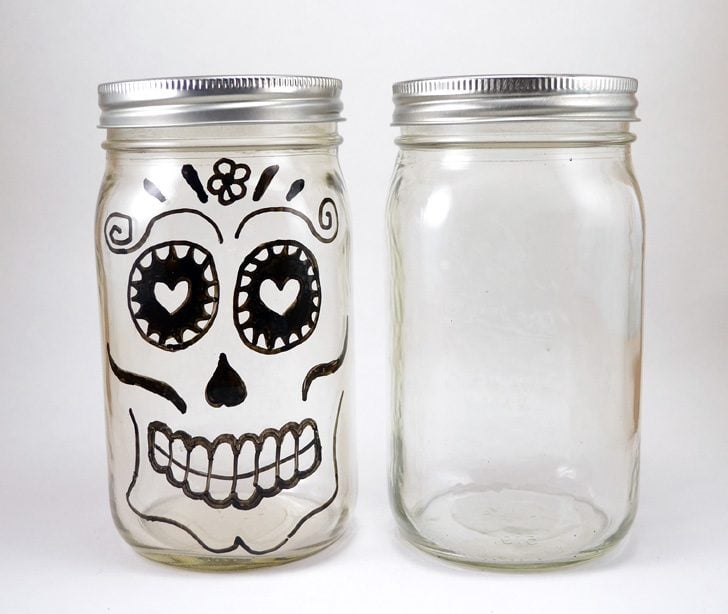 So this is what we’re working with. On the left side I’ve already drawn up one jar and on the right I have one that is ready for attention. Prior to drawing you’ll need to clean your jars with soap and water, towel dry and finish up with a quick swipe of alcohol so that your paint sticks to the surface well. 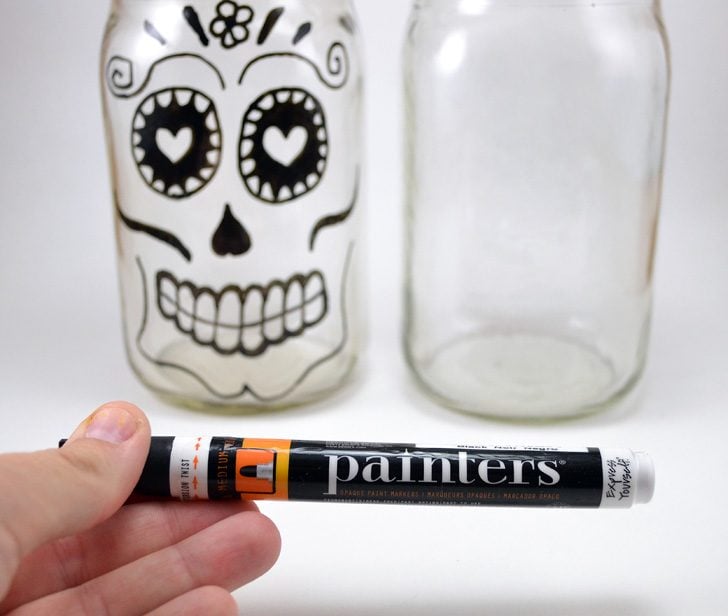 This is an opaque paint marker by Elmer’s that I got for around $2 at Walmart. You can buy the markers individually there which is great because I don’t really need a full set. These guys will air cure OR you can put things into the oven for a quick cure making them fairly dishwasher safe (top rack). 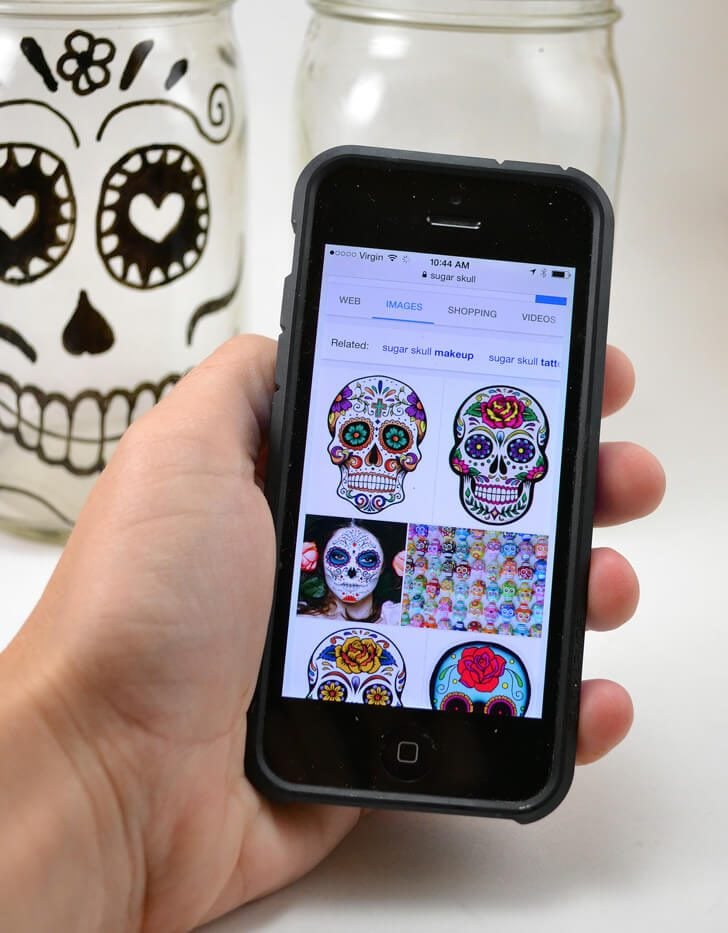 If you’re not terribly familiar with sugar skulls you might need some inspiration. Keeping your phone hand while crafting can be, well, pretty handy. Do an image search for sugar skulls to help with inspiration on how to draw your skulls onto your jars. 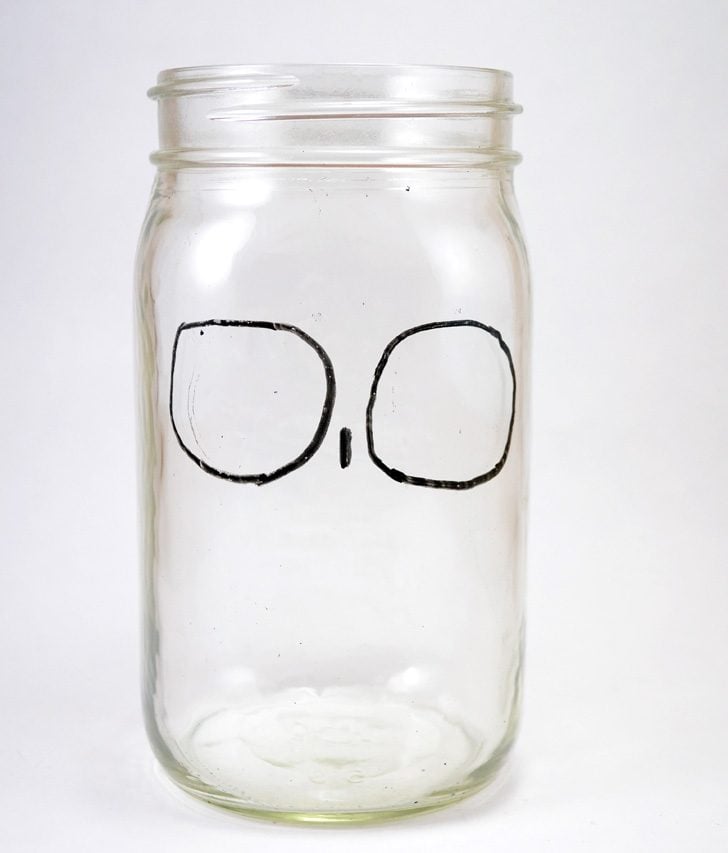 Start by making a small mark in the center of the jar. This is only important if your jar is more of a rounded square than a round, cylindrical jar. Use this mark to draw the shape of your eyes on first. If you make mistakes you can remove the paint with a paper towel or cotton swab with a bit of alcohol on it. 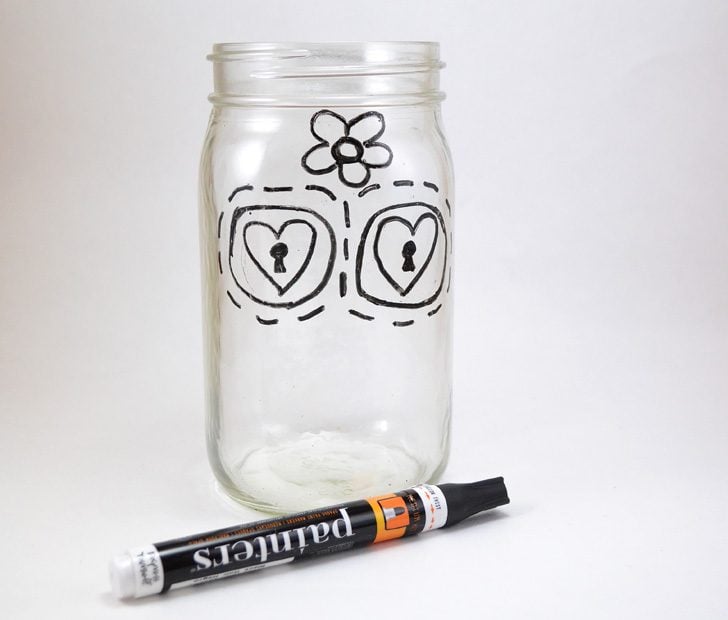 Continue drawing your eyes with fun shapes like flowers or hearts. Add an embellishment to the top middle like you find on the forehead of sugar skulls.

And just so you know I noticed that from all of my mistakes there was a TON of little black paint flecks on the surface of my glass. I wound up washing my jar and starting over, which is why it’s a bit different starting below :) 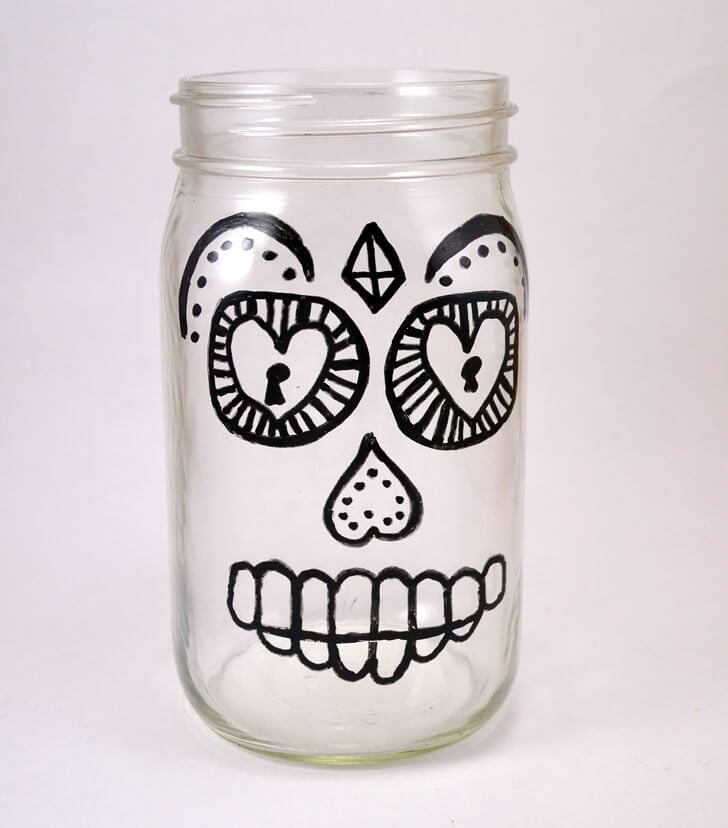 Finish your face with eyebrows or other embellishments, a nose and teeth.

Draw in cheek bones and a jaw like you see on the jar on the left to finish the design. Allow to air cure or set in the oven according to the marker’s packaging directions. 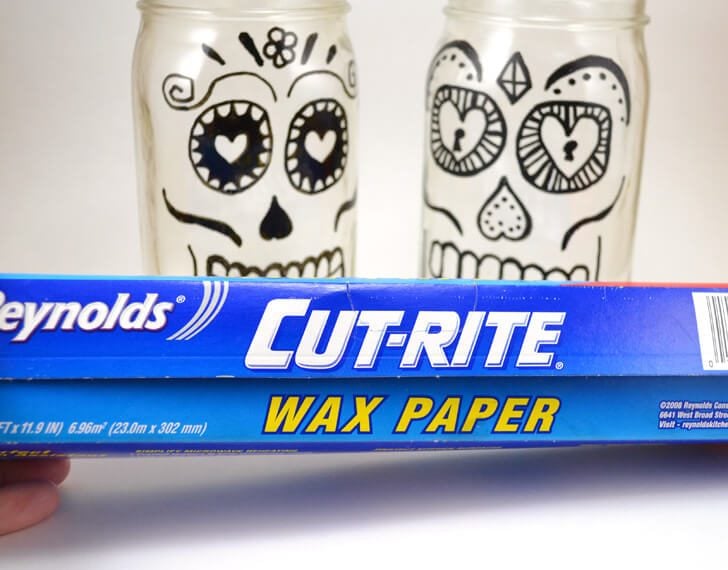 Getting my jars to glow and have the faces be noticeable was a royal pain in the neck. Christmas lights were too bright and they got really hot which worried me. Small battery operated lights didn’t seem to get bright enough. Glow sticks were obvious inside of the jars and you could only tell what the design was immediately in front of the glow stick. Smaller sticks only illuminated the bottom half and the skinny bracelet kind did practically no good whatsoever. 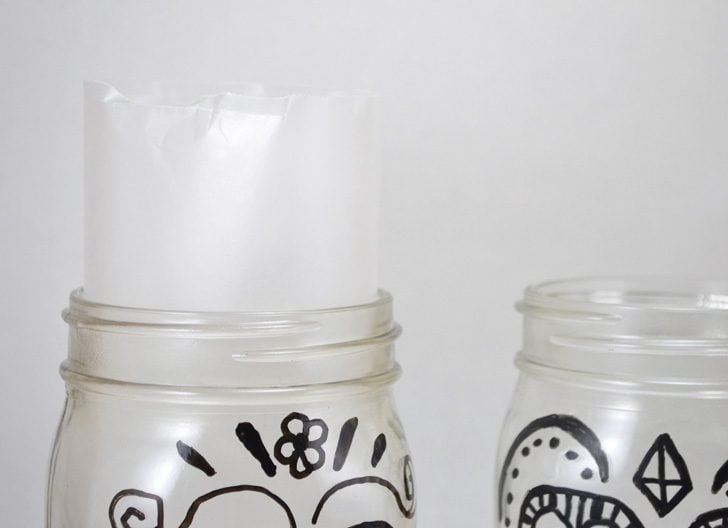 In the end I found that adding a sheet of wax paper to the inside of the jars was the perfect solution. Once your wax paper is inside of your jars, use scissors to trim up the excess sticking out. 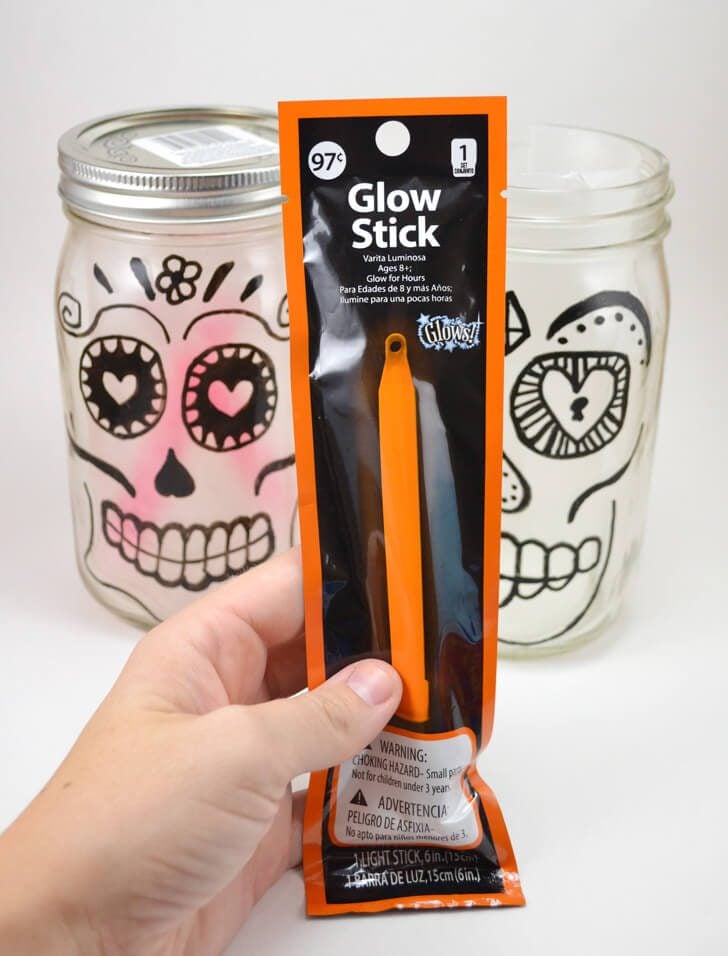 This is a fat glow stick. I purchased a freaking ton of these things and these are the ones that I felt worked the best. In the end it cost me $2 per jar to illuminate but if this is for a holiday party or just for Halloween evening or something I don’t feel that the cost is too excessive. 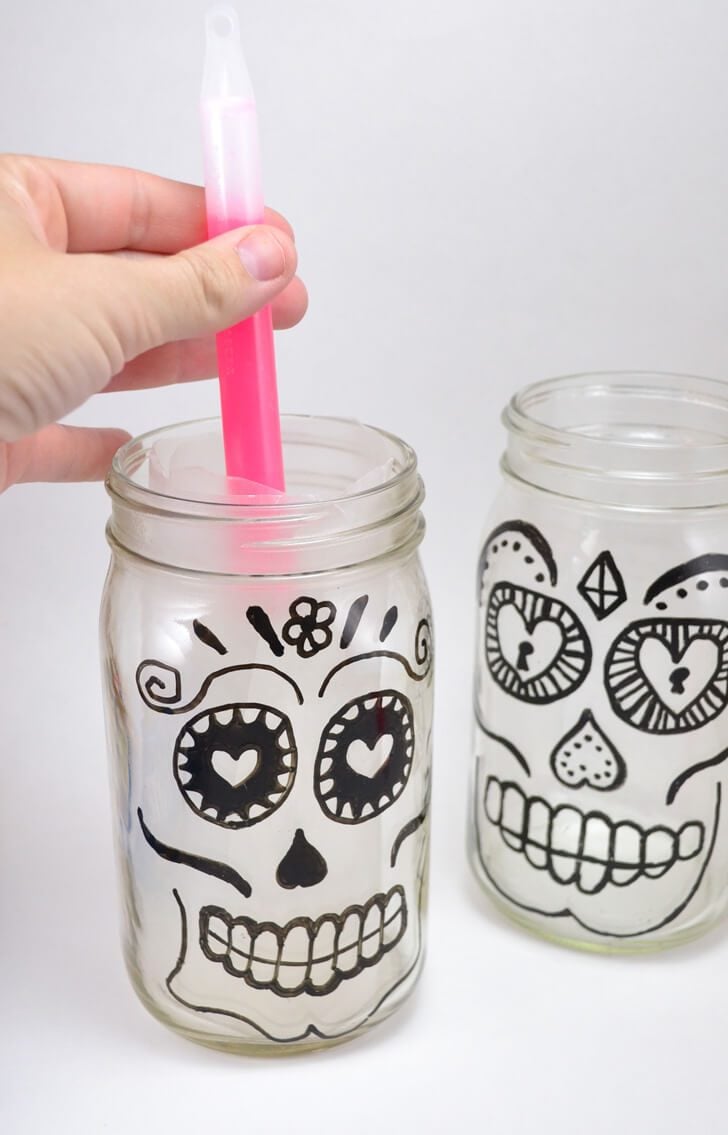 Drop one or two of the glow sticks into the jar inside of the wax paper. 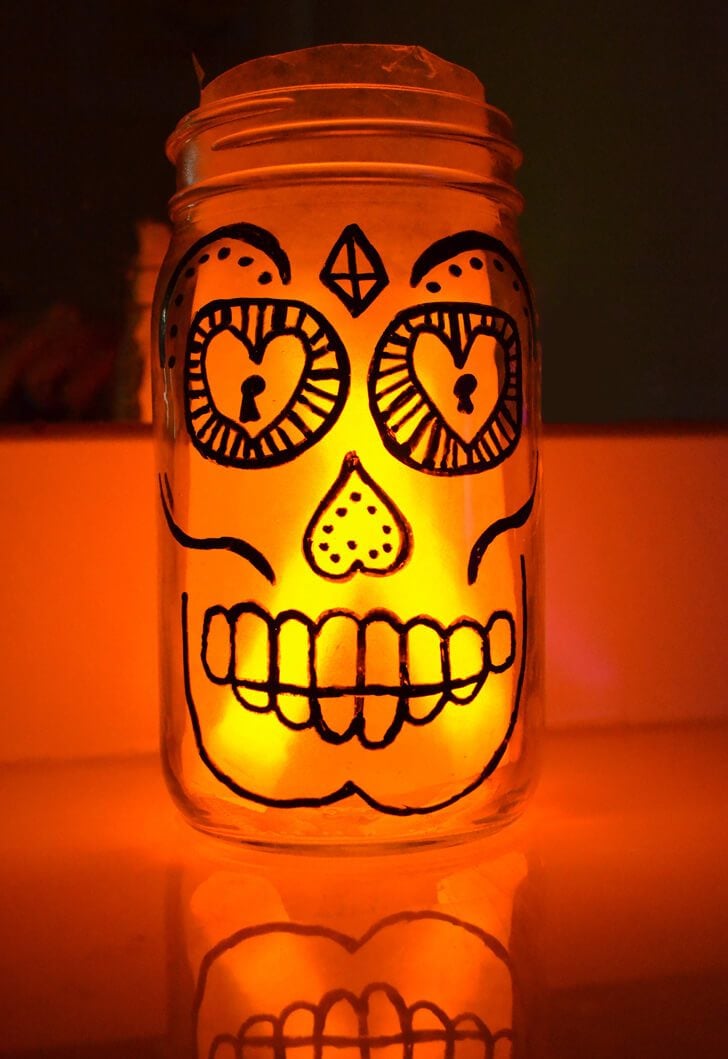 And watch those babies glow! Now you can still see the very distinct shape of the glow sticks but in real life it isn’t quite so obvious as it appears in the pics. 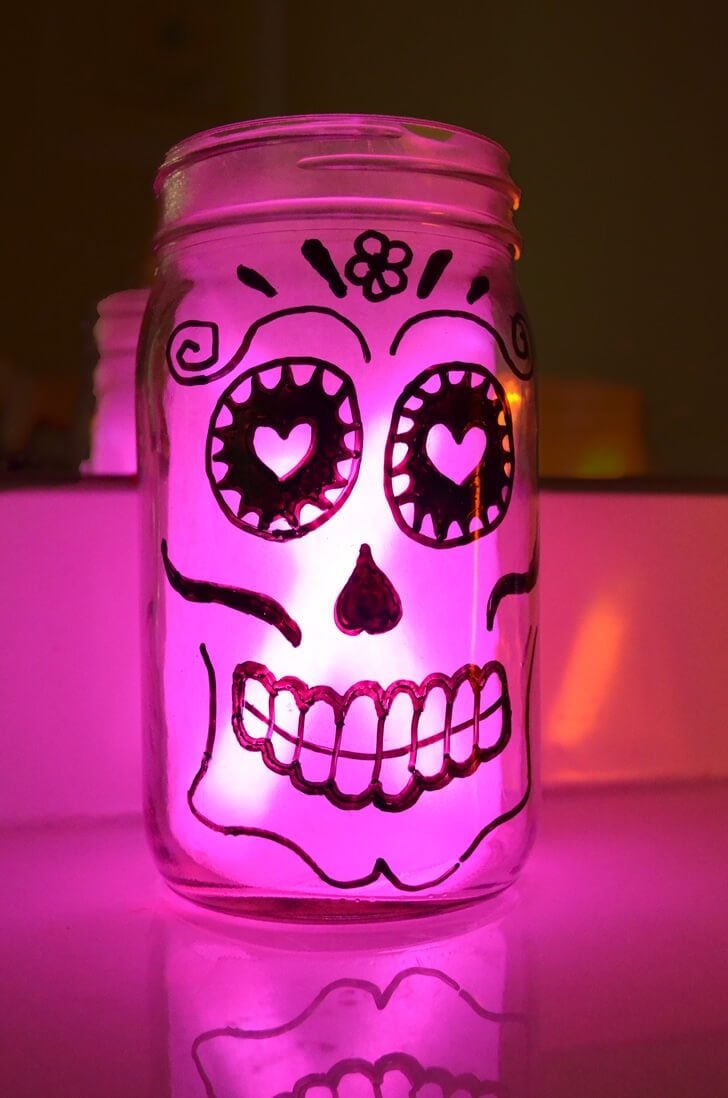 I placed my two sticks into each jar and the two put into a large, completely dark bathroom was enough to light up the room and be able to see what you were doing. Technically speaking one stick will work well enough but if you want yours super bright, I say throw in that extra glow stick.

Oh, and don’t put the lids back on. For some reason they just don’t glow all of the way to the top if the lid is on!

I put these in the bathroom around 5 p.m. and kept an eye on their glow. Around 9 they were definitely not quite so bright but you could still see very well in the bathroom. Around midnight you could easily make out the faces but the room wasn’t lit up like before. When I got up around 6 the next morning there was only a slight glow emanating from the jars.

All in all, they ran a lot longer than I had expected and should be ample time for a party or to decorate up your space on Halloween. In the end, I freaking love these things! 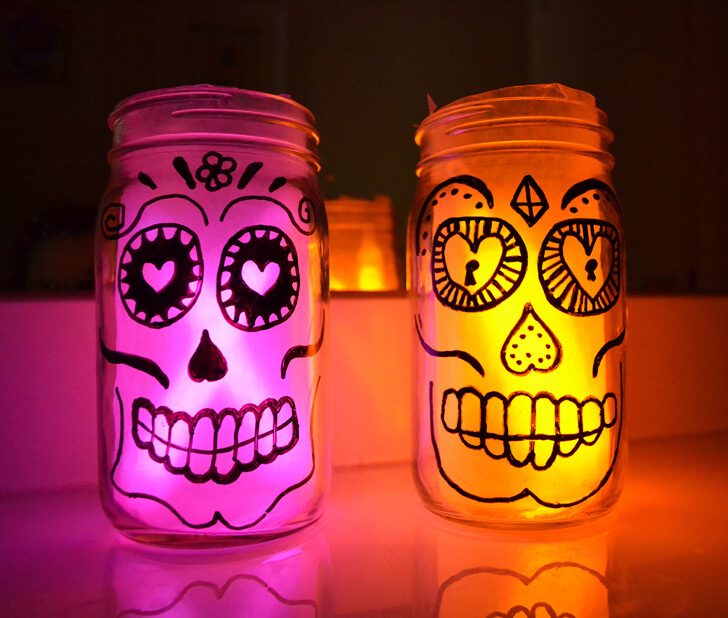