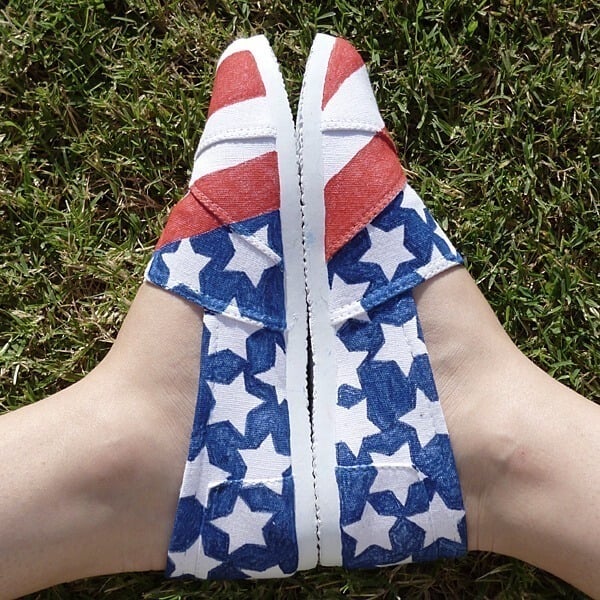 Happy Shoesday, everybody! I know that I have 36 days until the Fourth of July. That hasn’t stopped me from getting excited about it, though! The Fourth is my FAVORITE holiday. You want to see someone switch into a pyrobug overnight? Come on down! I’ll be spending the week before researching the different fireworks on you tube. Then I’ll buy up what seems like half the fireworks in China (really American, I know), grill some tasty food and do my best not to set the neighbors’ houses on fire. It is the greatest time I will have ALL year long. Seriously.

Last year I was able to get crafty even with my actual fireworks. I bought tons and tons of Roman candles and some quick burning fuse and made my own multiple shot “cakes”. Boy howdy did I feel hillbilly. Especially when no one came out because it was POURING and I was out setting off my fireworks in the street solo. Year before that we watched the neighbors get arrested and watched one of those multiple shots fireworks flip over and set off humongous explosions off in the garage, under the car. Dangerous? Yes. Hilarious – YES! Oh, well. :)

Back to Shoesday – I’ve been finding myself staring off and daydreaming about fireworks so I know it’s time to start party prepping.First on my 4th preparedness timeline are some super patriotic, proud to be an American kicks. I really, really dig them. Grab your red and blue fabric Sharpies and make your own!!!

On a totally related, unrelated side note, have you ever seen the movie Dick with Kirsten Dunst and Michelle Williams? These are totally inspired by the clothes the girls wear at the end. Haven’t seen it? Check it out – it’s super cute! 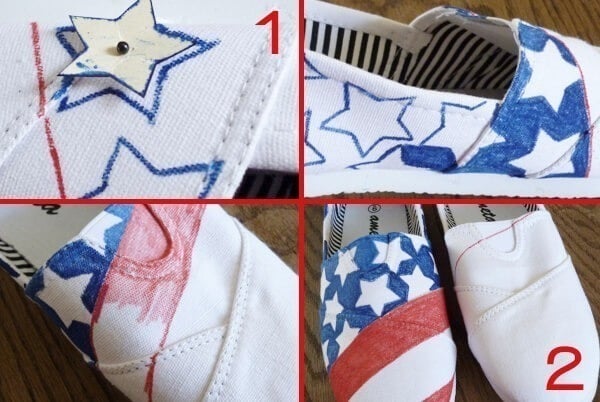 STEP 1: Draw a diagonal line across the front of your first shoe where you want to divide it between stars and stripes. Next, draw the shape of a star in the size you want on your shoes out of some stiff paper and neatly cut it out. (I used a manila folder.)

Ram a straight pin through the middle. Push it into the canvas of your shoes and hold down with your thumb on the pin. Trace around with your blue marker. Continue tracing stars around the backsides of your first shoe.

STEP 2: Draw your first red stripe with the width being about an inch or so. Fill in and an inch down, start the next stripe. Place your shoes side by side and continue the stripe across your second shoe. For it to look right from the top, it won’t match up perfectly on the inside sides of the shoes – so don’t worry about that.

STEP 3: Continue marking up your second shoe with stars and stripes. Go around the inside lip of your shoes with your red and blue markers to complete the look. 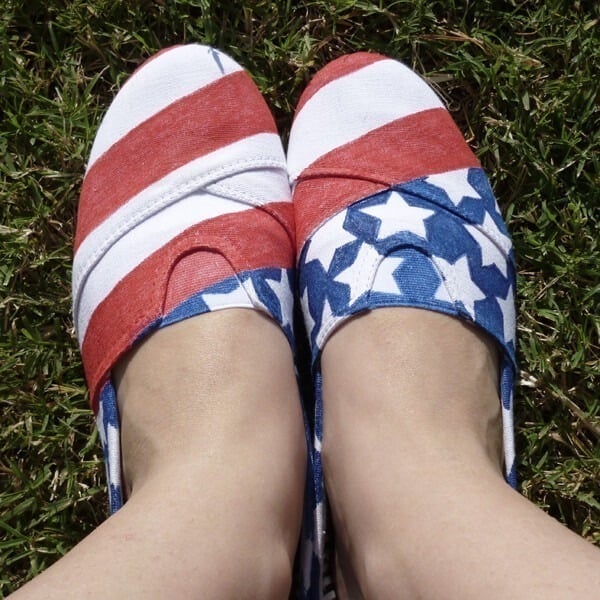 And that’s that. Seriously! You can even mark up some of these suckers if you aren’t overly patriotic, or if you’re not American. They’re still kitschy cute!

I'm a crafty cat lady with big dreams and an inability to sit still. I make it, I live it, I love it. Here at Dream a Little Bigger you'll find lots of inspiration for crafts, crochet, DIY, food, pet life and all things rainbow. Lots and lots of rainbows.
1.3K Shares
Pin1.2K
Share25
Tweet
This site uses cookies: Find out more.