We’re gonna come right on out with this so you know what’s up… While crazy fun this business is a MESS. It’s a freaking MESS and I haven’t figured out how to make it less messy. That being said I am working on making it less sticky and hand staining than it currently is but I’m sharing this today anyway because this business is FUN.

I LOVE slime. There’s something about keeping my hands busy that has always appealed to me and sometimes my hands hurt so I don’t want to crochet or embroider or whatever and slime helps to exercise my hand and keep the antsy side of me from climbing up the walls. So when I heard “fluffy slime” and saw a video on Instagram where this chick jammed her fingers into this fluffy business and it seemed crazy satisfying I decided I had to try to make it.

I couldn’t find a tutorial online already so I had to dream something up and I made a TON of batches. But the good news is you use a small amount of glue and a large amount of shaving cream for this project so it’s cheap enough to fail a few times without any tears.

Oh, another heads up, this business does not stay fluffy forever. Leave it overnight and it’s more like normal slime in the morning, but stickier. This is a fun while you make it and a little while after, make sure the kids don’t have on anything important and you don’t have to cart their technicolor butts to something like a wedding in the next few days because things are about to get real. Real fun that is. And sticky. Dear word, so sticky. 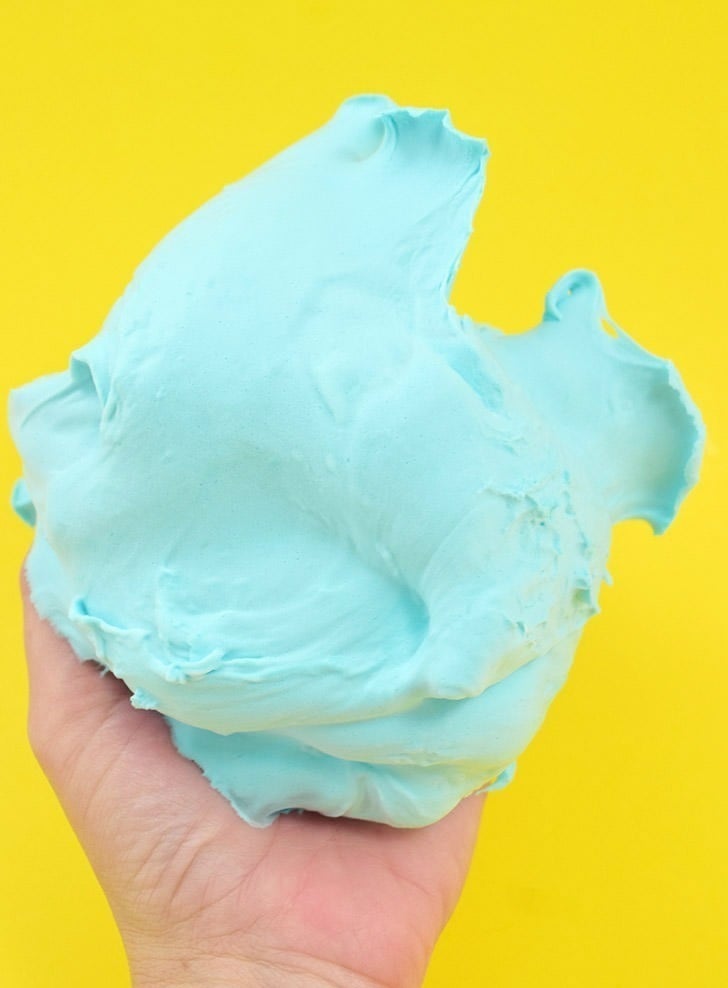 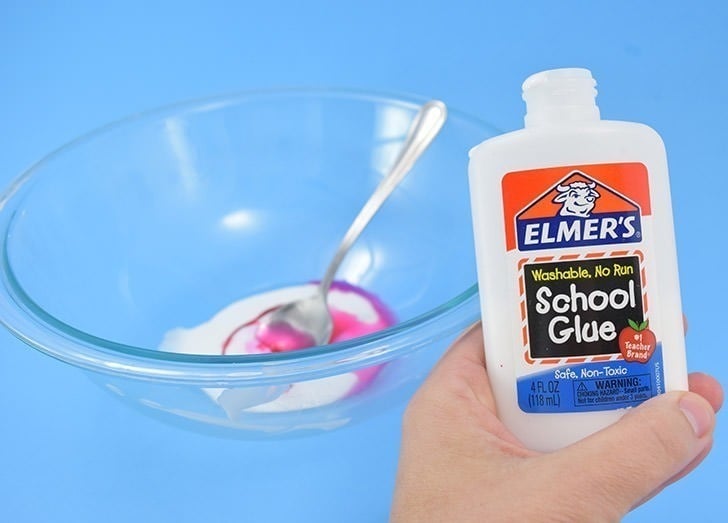 Place 1/8 a cup of Elmer’s school glue into a big bowl. Add food coloring, if you dare. 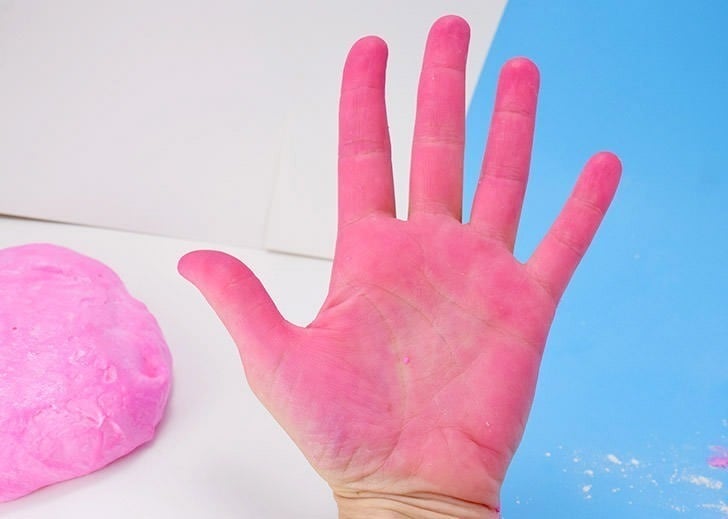 Heads up, that’s why. 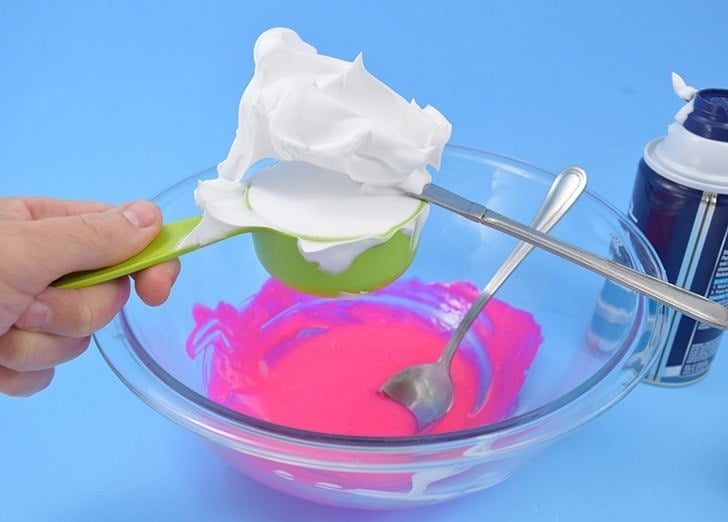 Add 3-4 cups of shaving cream to your glue. Now It is pretty dang impossible to measure this stuff out because it just keeps growing. 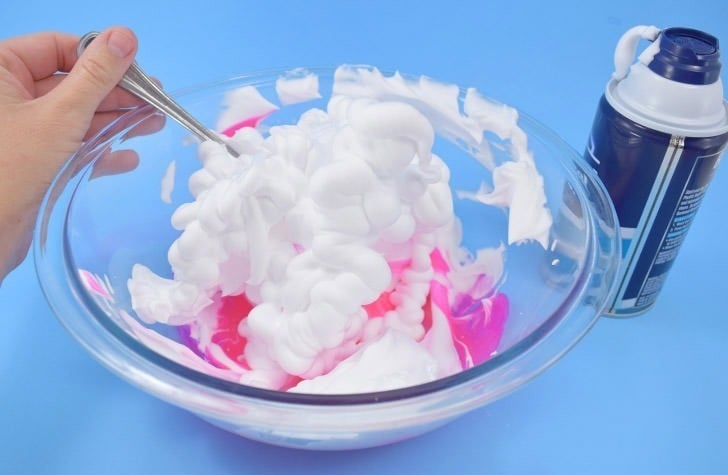 It’s insane. Eyeball it and be good with it. Oh, and buy cheap shaving cream. Nothing with fancy aloe vera or anything. 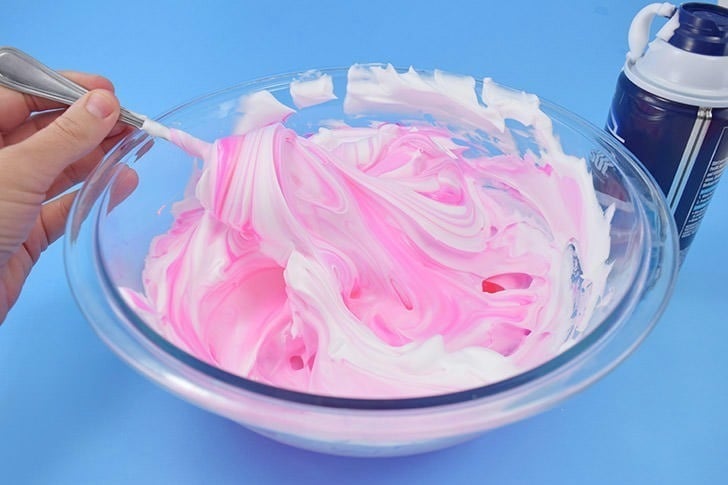 Fold the glue and shaving cream in together. P.S. a spoon works for crap.Grab a rubber spatula, it makes things SO much easier. 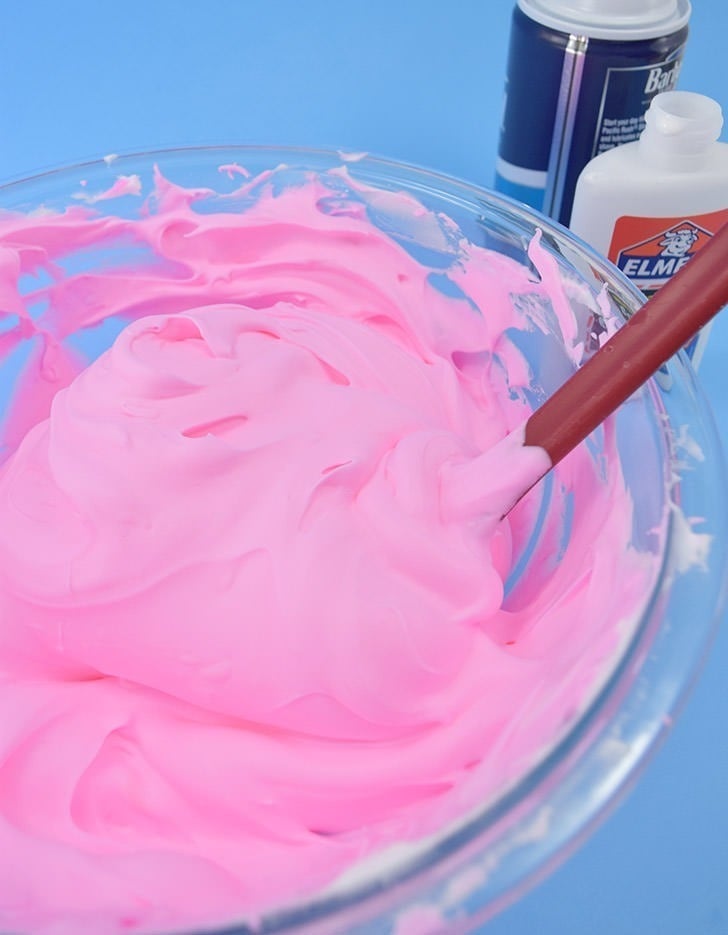 Once well mixed add 1 teaspoon of borax to a cup of warm water. (this is separate from your fluff) 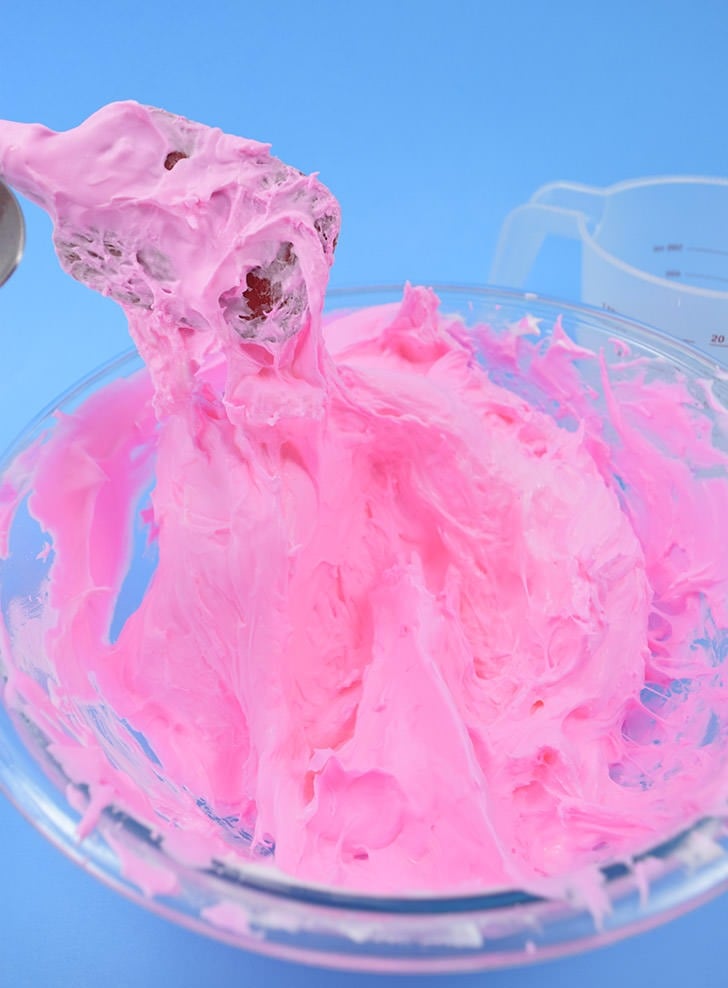 Add 2-3 teaspoons of Borax solution and stir your mixture. It will become thicker and more slime-like in texture. Continue adding solution until it starts to pull away from the bowl easily. 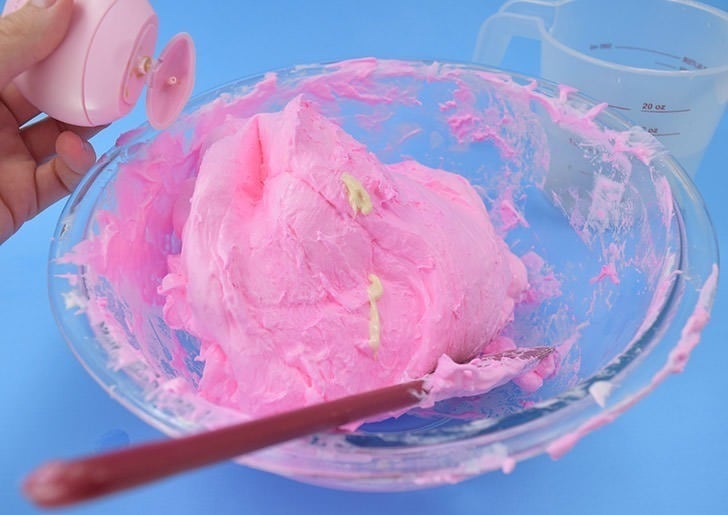 Okay, now with a bit of experimentation I found that if my hands were super greased up the stick factor was less, and in my multiple attempts I decided to add it right to the slime and guess what? It helped a ton BUT it totally depends on the lotion. EOS hand lotion worked well and so did Vaseline but others not so much. You’ll have to experiment with what you have and see how it goes. 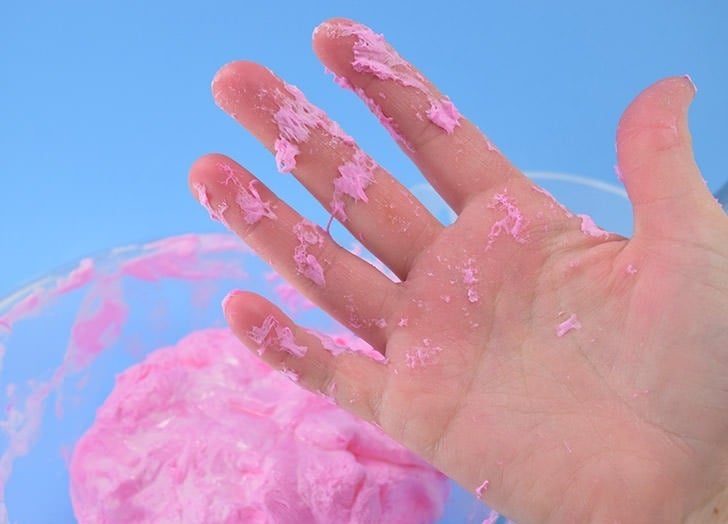 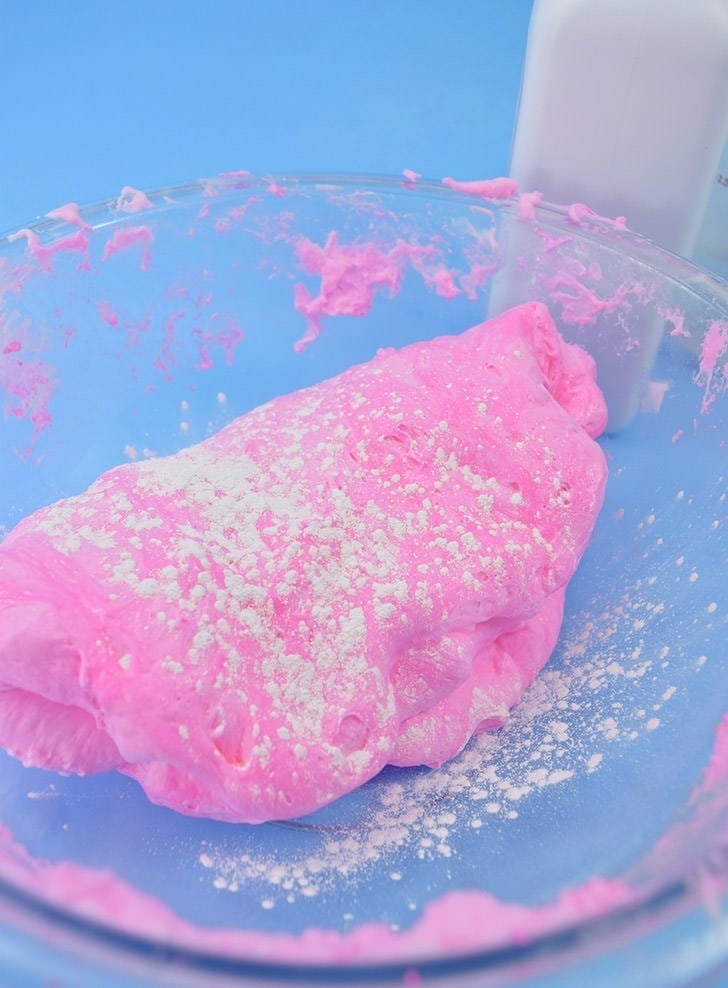 To help a little bit further add some powder to the slime and fold it in. This will make it less “fluffy” than it would be as it weights the slime down but it makes for cleaner play. 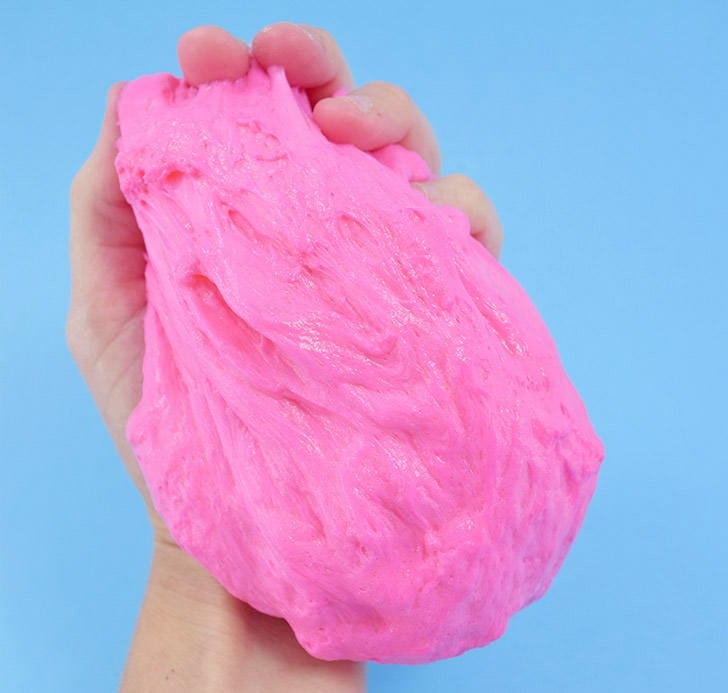 Now this is my “fluffy” slime after about 2 hours of playing with it off and on. It’s still really puffy. Remember that’s only 1/8th a cup of glue in there so it’s largely just shaving cream. 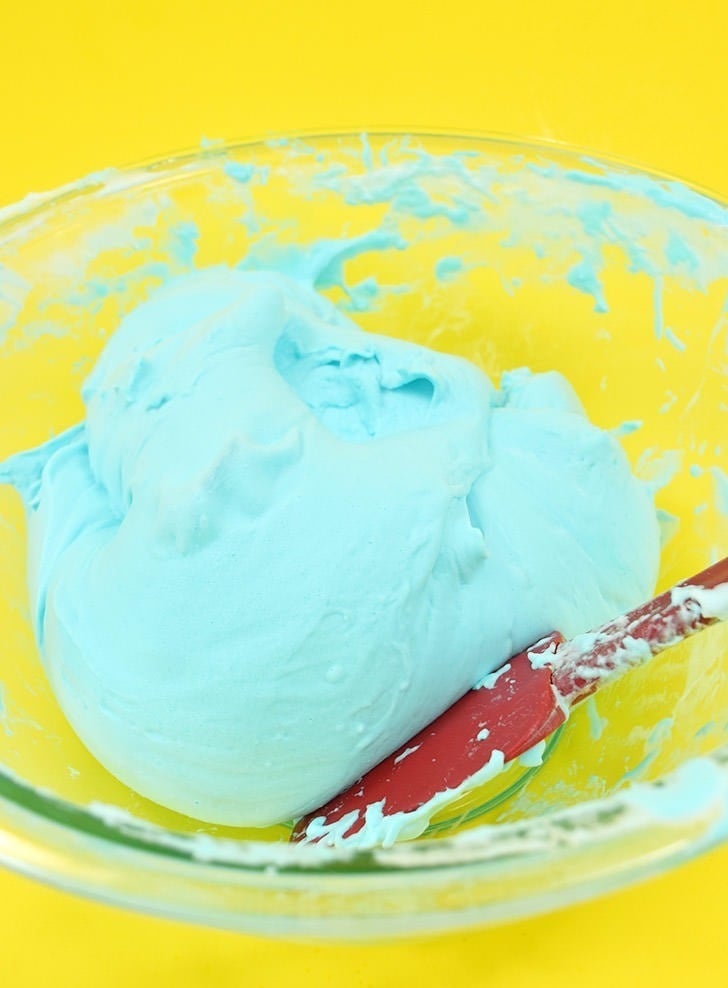 Now this business is straight out of the gate, not too much powder added and really sticky. But you can also see that it’s really awesome, like it’s the best. It’s going to get everywhere so put the kids on tile or outside and if they’re young enough to just have ’em half naked while playing with this that probably isn’t a terrible call. But then again they’re going to stain their skin so, you’re Mom I’m sure you have a much better idea on how to handle this.

Really, I’m not playing when I say this stuff is super messy and kind of a disaster but it’s so much fun I don’t care :) Life’s messy! Get in there and enjoy it! 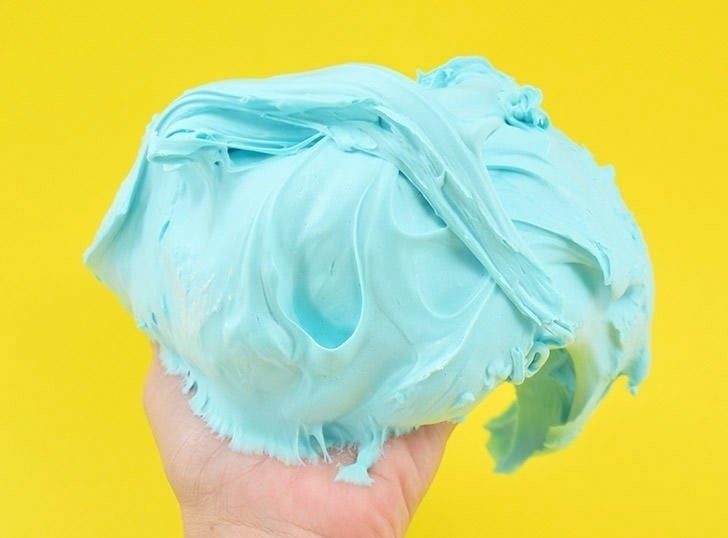