Learn how to make homemade soap, adding loofah to the mix for the perfect exfoliant. Perfect for even a first-time soap maker, these loofah soap bars are super simple and make great gifts!

I have a tendency to go through crafty phases where I’m absolutely in love with something, buy tons and tons of supplies for it, and then fall totally out of love with it. It was fun but now it’s done, as I like to say!

But since I initially wrote this post back in November 2016, I’ve still got an interest in soapmaking to the point that we have too much friggin’ soap in this house. I suppose that’s not such a bad problem to have. Sort of like toilet paper or chocolate or wine, it’s better to have too much than not enough soap, right? :)

My very first soaping project, these DIY loofah soap bars are total proof that you can be a total newbie, never made soap in your life crafter and make perfectly exfoliating soaps that are absolutely beautiful. Whether you add to your own stash of toiletries in the bathroom cabinet, or if you wrap these up and give them as gifts, this is one craft project that pays for itself! 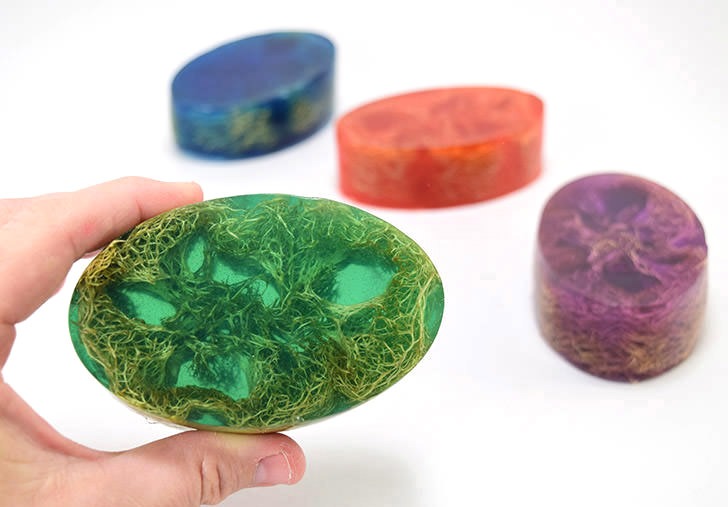 Before we get started, do you know where loofah comes from? Because I sure as heck had no clue until the summer of 2015… And for whatever reason, I was absolutely positive that it came from the ocean. Did you think that, too? Maybe it’s because sponges come from the ocean but I can tell that, no, absolutely without a doubt, loofah does not grow in the sea :)

Loofah is actually a gourd grown in the ground. Here in South Texas, I met a farmer named Franny who walked around her growing plants explaining to me what everything was and how it was grown when she mentioned loofah. Growing on a vine, these tube-like gourds have an exterior that is sloughed away to reveal a Shredded Wheat type of thing that is very moist and sticky and must be properly cleaned and dried out prior to bath-time use. Oh, and it turns out chickens really love to eat them. And why shouldn’t they? The loofah is related to cucumbers and is totally edible. 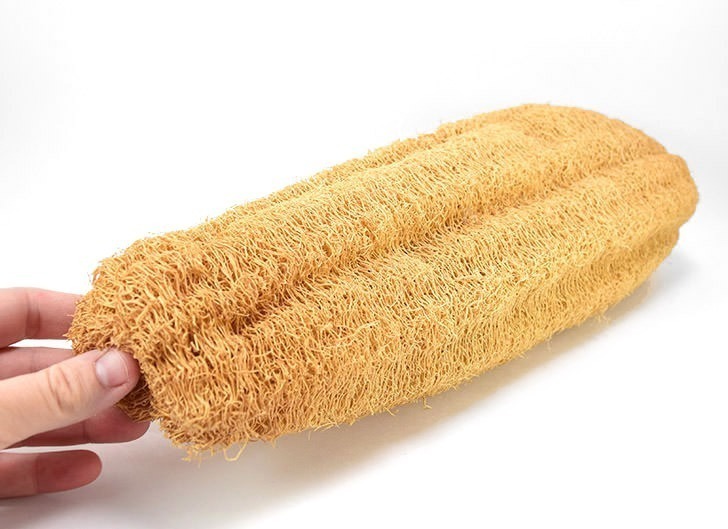 For this project, I bought loofah from our local health food store that also sells locally grown organic produce. The cost for one gigantic loofah was only $5. You can also buy a whole loofah online at Amazon for around $10. With the loofah I purchased I made 4 soap bars, watched Carly eat about 3 inches of the thing and I still have over half of it left. And so there you have it. Dogs AND chickens love loofah. And you will, too, once you scrub a dub with one of these awesome loofah soaps.

I do have to say, that loofah won’t last forever, as I’ve learned. Stashing away about 4 inches of the stuff for later use and digging it out a little over a year later, the loofah was no longer good. The texture had changed to something rougher and it was far more difficult to cut. I went ahead and used it and found that the soaps were unusable. While previous batches were exfoliating, this one with old loofah was downright excruciating and far, far too scratchy. So when you do purchase your loofah, only get as much as you plan to use in the next few weeks! 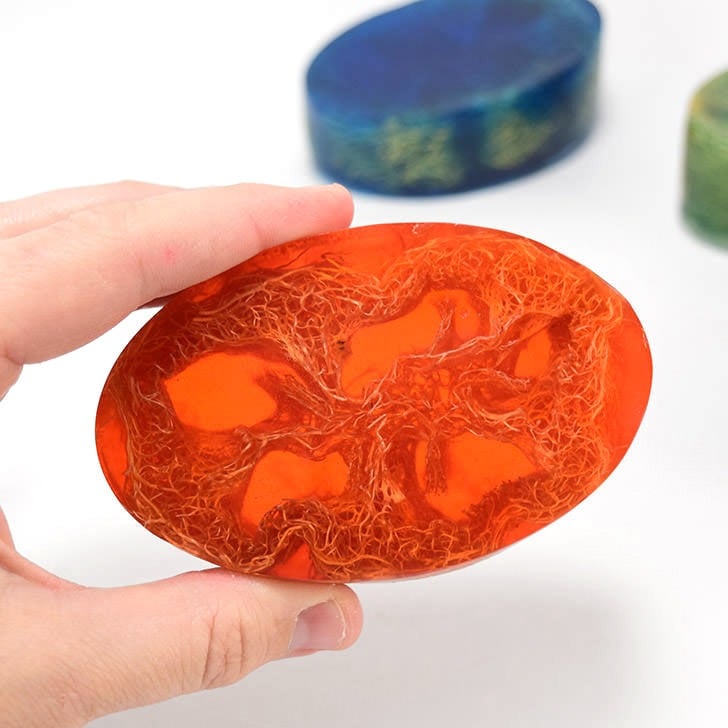 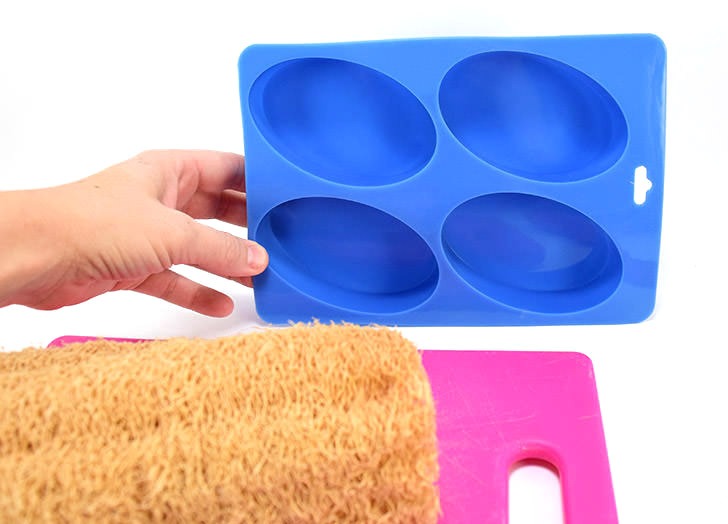 Because loofah can be kind of big I’d really, really suggest this awesome, large bar soap mold I scored from Amazon for about $13. It seems pricey but I’m going to get so much use out of this sucker that I’m really happy with the purchase… 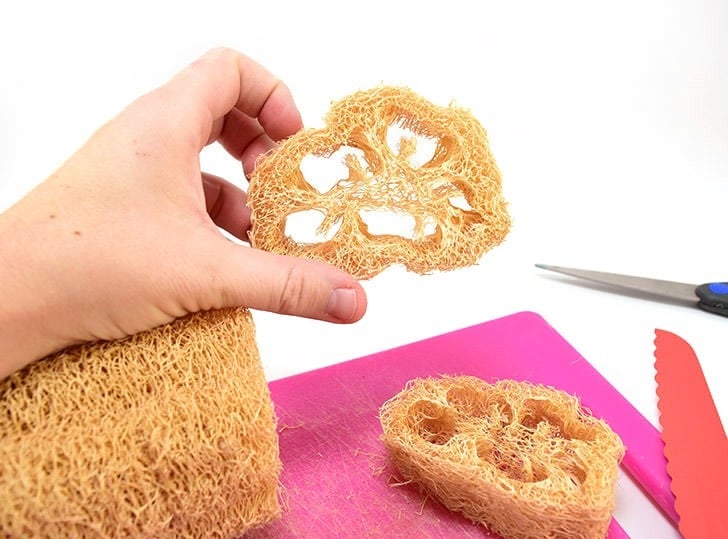 Cut your loofah into slices slightly thinner than your soap mold. A bread knife works super well. If your slices are too thin they disappear in the soap and are just kind of “meh” looking (my blue one turned out that way which is why it’s in the back on pics :) 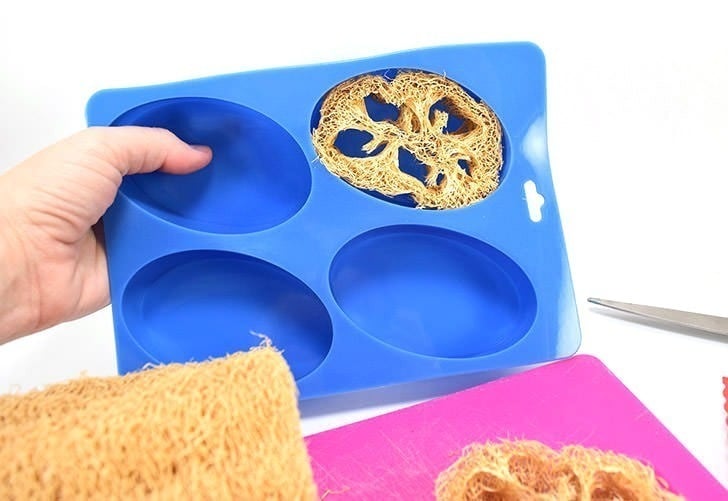 Jam that business into the mold. Loofah is squishy-ish so you have some play with getting them to fit even if your loofah is a bit bigger. 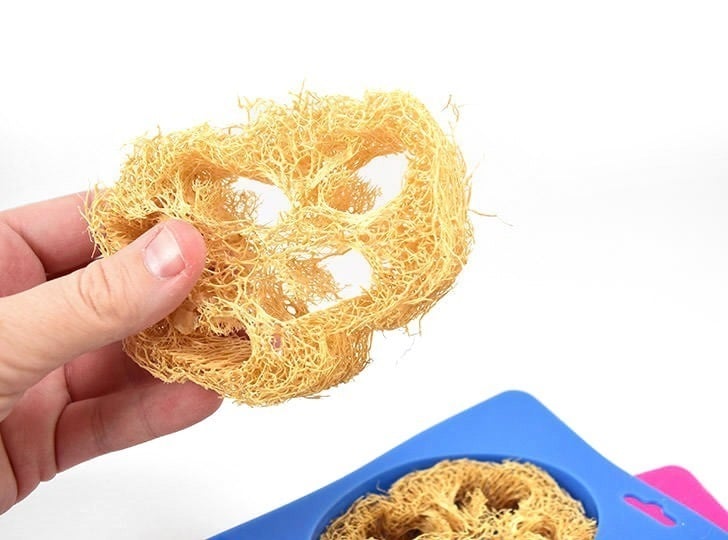 If you’re a perfectionist, as I can be, you can use scissors to snip the stray Shredded Wheat business for prettier, cleaner edges. 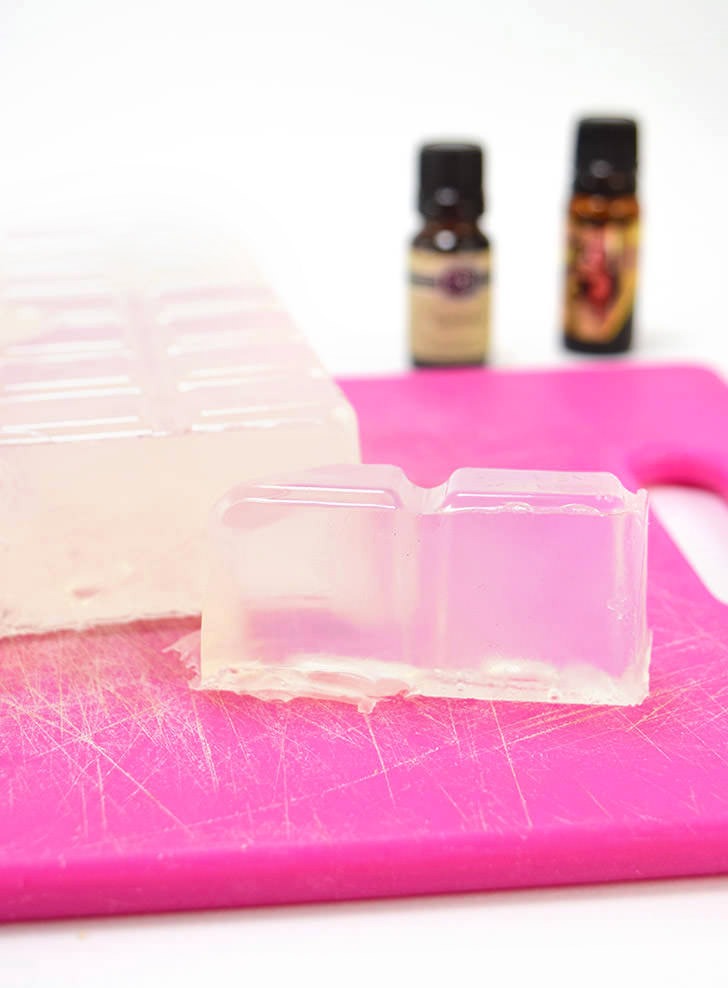 Melt your clear soap base in a microwavable safe cup according to package directions. The mold that I am using took about 1.25 pounds of melt and pour soap base.

Add your choice of colors and scents to the melted soap. Be careful. This business is HOT and that can mean nasty burns! 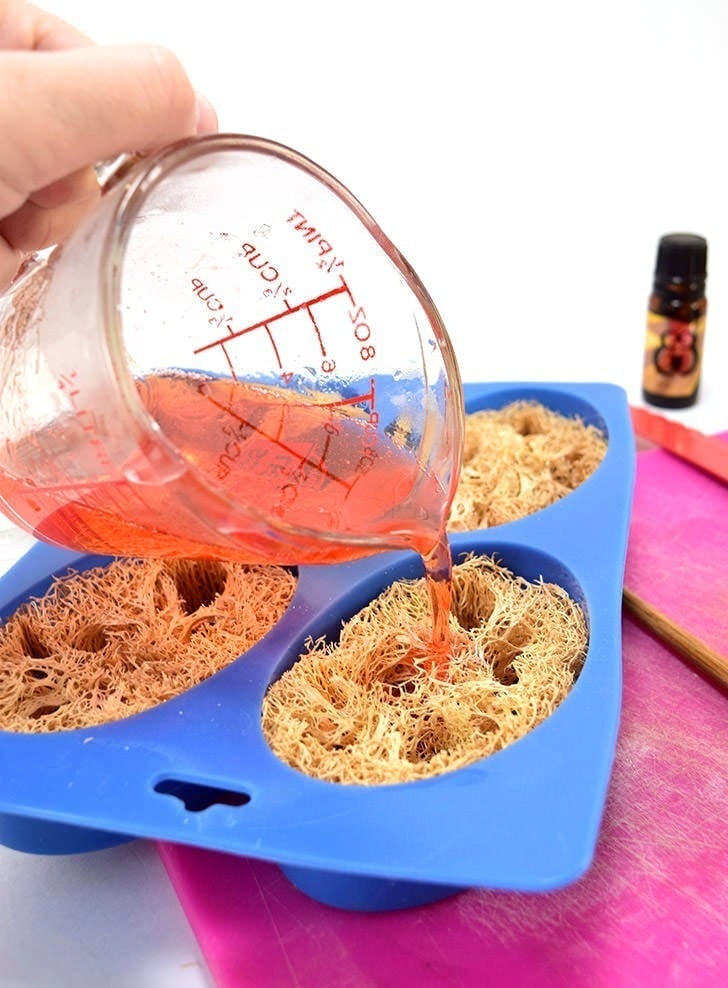 Pour the melted soap into the soap mold, over the loofah. Be sure to pay attention to how hot your soap is in relation to the heat your mold can take. Some will warp if you’re not careful… 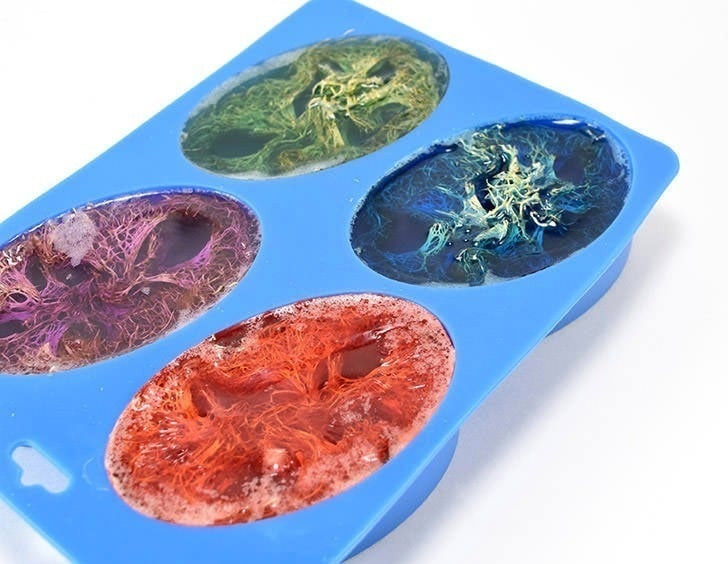 Allow the soaps to sit for a few hours so the soap can harden up. 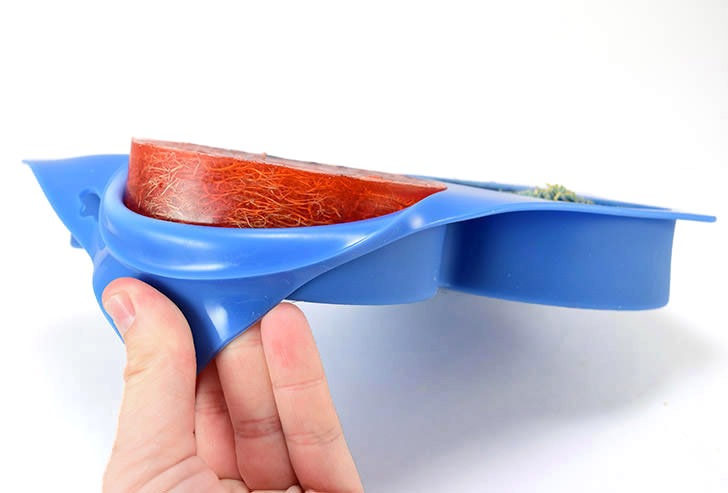 I popped mine out 3 hours later but they can take up to 24 hours depending on your soap base.

Now isn’t that so nifty? The soap completely envelops the loofah so that, at least at first, the sides are nice and smooth and perfectly gift-worthy. I’m seriously swooning over here (and rubbing my hands together like a praying mantis waiting for my shipment of soap making supplies, get ready for it!) 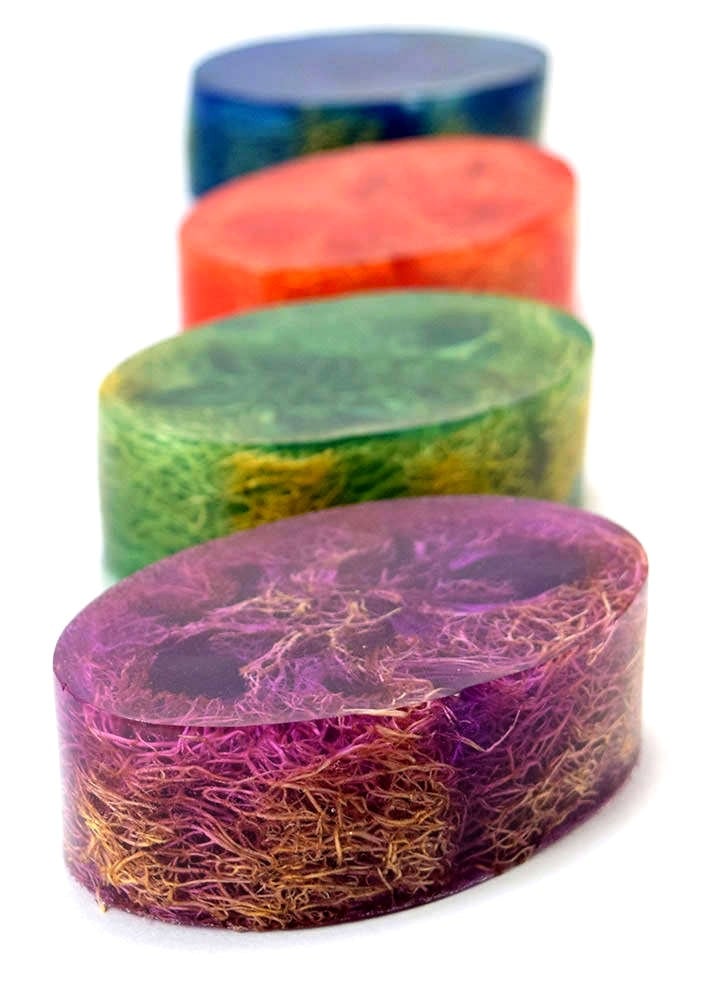