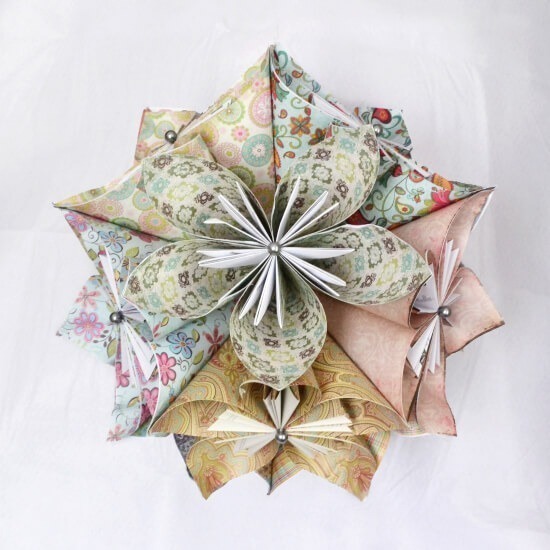 Have you ever heard the phrase, Go Big or Go Home? Looking up at my giant Kusudama origami ball you might notice that it’s a philosophy I tend to live by. It’s also something that my dad said to me when I was a kid, along with other sayings that you’d find almost exclusively on Big Dog tee shirts. Remember those? ugh.

But that’s kind of what I did here. A while back ago I shared how to make Kusudama origami flowers with a promise to show you how to connect them in a future tutorial. Well, that tutorial is today. And while I had a bazillion little Kusudama origami flowers all ready to go, I decided that I wanted to go BIGGER and sent Russell to Hobby Lobby on his way home for 5 pieces of 12 different patterns of scrap-booking paper. Yep, the 12 inch by 12 inch scrap-booking paper. 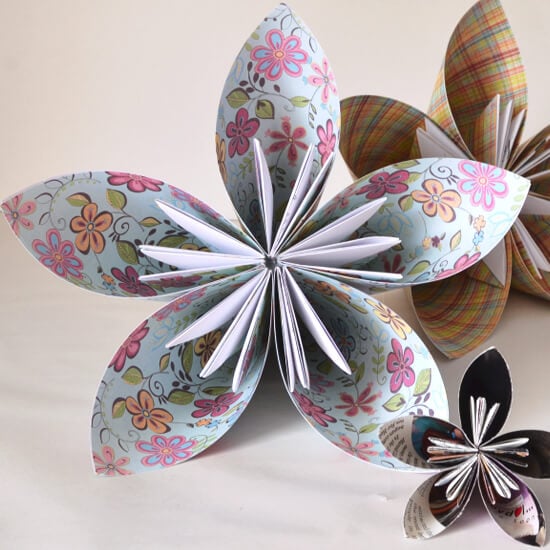 And I made some super massive Kusudama origami flowers out of them.  Check out the big and little. Big is insanely bigger, is it not?

Now you don’t have to make your Kusudama ball giant if you don’t want to. Any size of origami paper will work just fine. If you do want to go big, you should probably consider shopping for scrap-booking paper during a sale. At 59 cents a sheet, this big paper ball wound up costing almost $40 with tax which I really didn’t think about until it was too late. Oops! 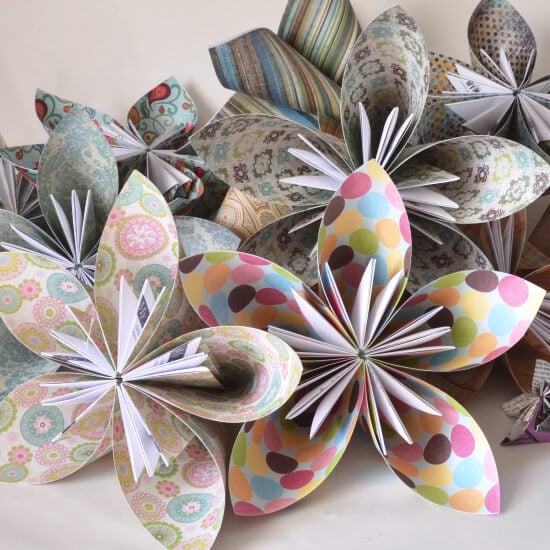 Now you need a whole mess of 12×12 scrapbooking paper  to make a ball,12 to be exact. The tutorial to make the flowers is here. 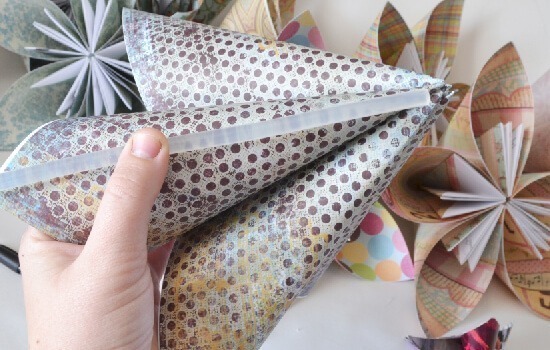 Since you have to work with hot glue quickly and it’s fairly difficult to see in pictures, I used a glue stick to show where you’ll be applying a line of hot glue. 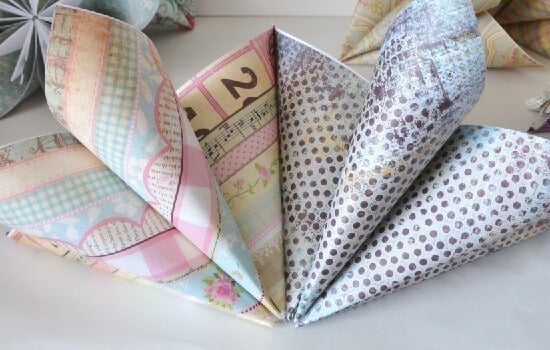 Place the petal of another Kusudama into the glue, making sure that the edges and back tips of the petals match up. 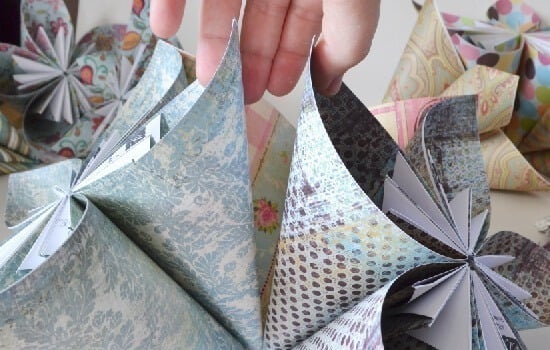 Keep connecting petals just like that until you have six together. 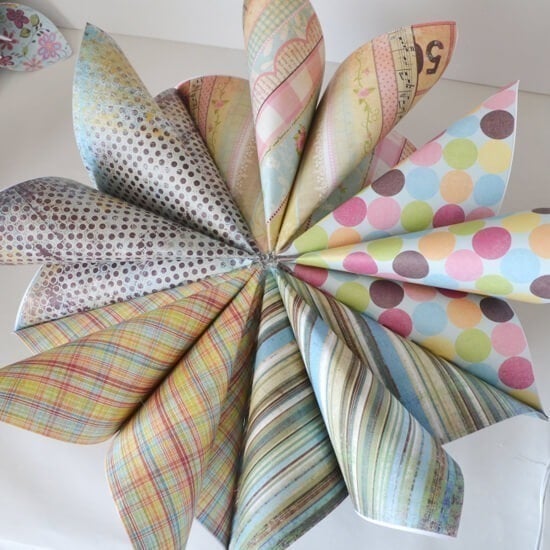 Together they’ll form one half.

Along one petal of your half take and glue your string or fishing line down nice with a pretty thick coat of glue. Make sure you have lots of excess hanging off to tie onto hanging implement at the end. I doubled my fishing line and left about 2 feet of cord hanging off of the end. In the end I decided to use the fishing line because it is made to hold weight and be tugged on. I figured that has to be a lot sturdier than yarn and I don’t want all of my hard work crashing down on me! 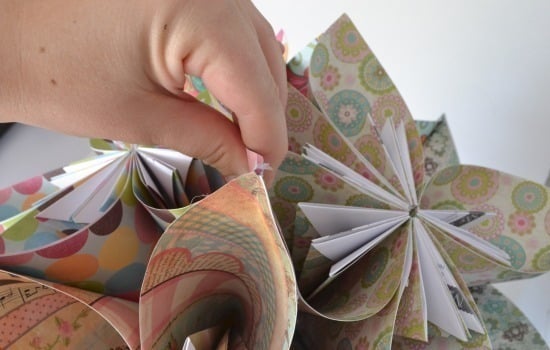 See how I’m holding the petals together? You might notice that I’m actually holding three petals together. If you look at the two halves placed together, you can easily tell which petals to glue together thought it’s a bit difficult to explain. 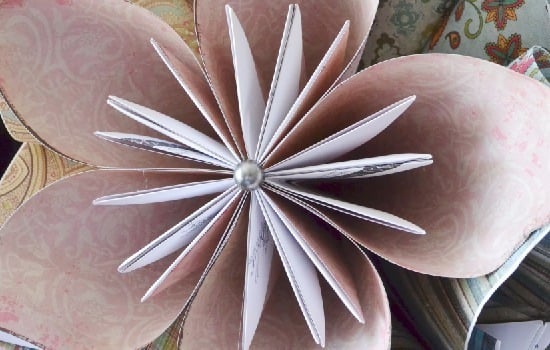 To fancy things up a bit, I hot glued a glass pearl to the center of every flower. 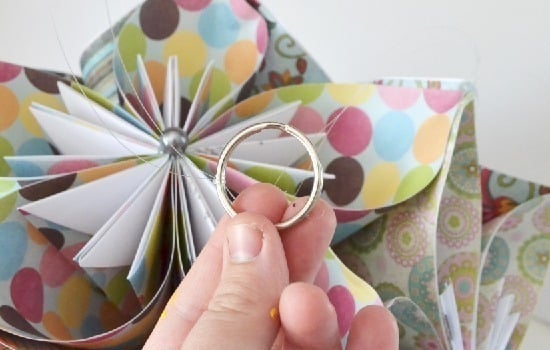 Since I have a ton of these loops used to make key chains, it’s what I used as my hanger. You can use anything you find or have on hand. If your ball is big, like mine is, you’ll need to keep in mind that it will need to be fairly sturdy to hold a decent amount of weight.

Hang it up and you’re all set. Now how many people do you know that have a gigantic Kusudama origami ball hanging in their home?

If this is your first attempt, I’d really recommend going smaller than I did. I’ve made a tons of Kusudama balls but it’s been a while and I have a few areas where I glued things together wrong simply because I was working really quickly with the hot glue and the project was so big it sometimes became a bit daunting. It would have been so much easier if I had another pair of hands, so keep that in mind if going big.

And if you’re game and you’ve got the scrap-booking paper, the finished result is pretty stinkin’ awesome! Just out of curiosity, if you make one what sized paper will you be using?

I'm a crafty cat lady with big dreams and an inability to sit still. I make it, I live it, I love it. Here at Dream a Little Bigger you'll find lots of inspiration for crafts, crochet, DIY, food, pet life and all things rainbow. Lots and lots of rainbows.
399 Shares
Pin388
Share11
Tweet
This site uses cookies: Find out more.