I love playing games to the point that I tend to annoy people asking them if they will play with me. Oddly enough Rob also loves games but we haven’t played anything together, yet. We keep saying we will and meaning to but it just doesn’t work out.

One of the things we do find ourselves doing quite often is sitting in our little outdoor love seat watching the dogs run around our itty bitty backyard. We both love being outside so this is a nice time for both of us and we’ll often shirk our responsibilities just a little bit to catch some outdoor time.

I thought that if I could mix games and the outdoors together I might get a game in every once in a while. So Rob and I headed up to Lowe’s so that we could make a set of giant wood lawn dominoes. For a cost of less than $20 this was one heck of an awesome project for us! 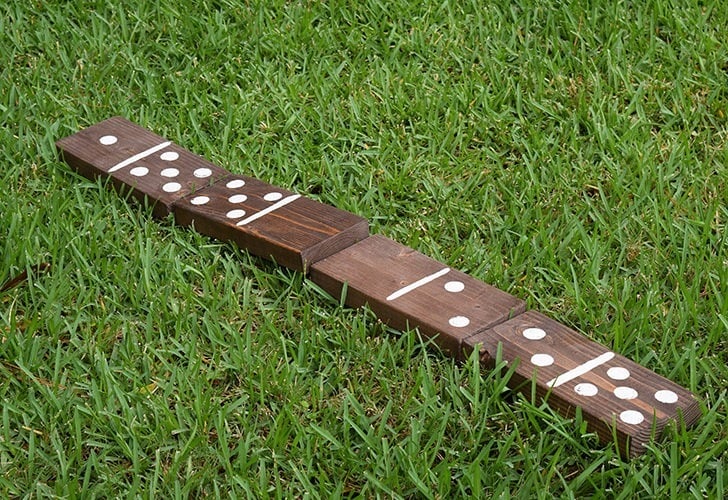 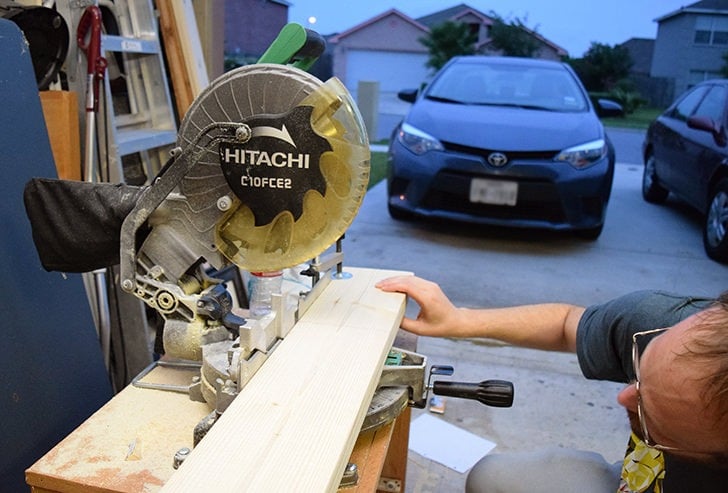 Believe it or not, I actually researched the common sizes for dominoes and there are apparently 5 different sizes.  I decided to go with approximately the same ratio as professional dominoes that ring in at 1″x2″. I decided to just increase the size to 6″x1′ to keep things proportional.

Now there are 28 dominoes in a double six set (to say the highest domino has a six on both ends) meaning you’ll need at least 28 feet of 2″x6″ select wood board to cut to make enough dominoes. I purchased 4 – 8′ boards at $4.25 apiece for a total of 32 feet of length. That would give us plenty of wiggle room in case of mistakes. We could also have purchased exactly 28 feet of board by getting 2 – 10′ boards at $6.18 apiece and 1 – 8′ board at $4.25 apiece but then there would be no room for error. When you do the math it only cost me  $0.39 more to get an extra 4 feet of wood to help make up for any errors in cutting. 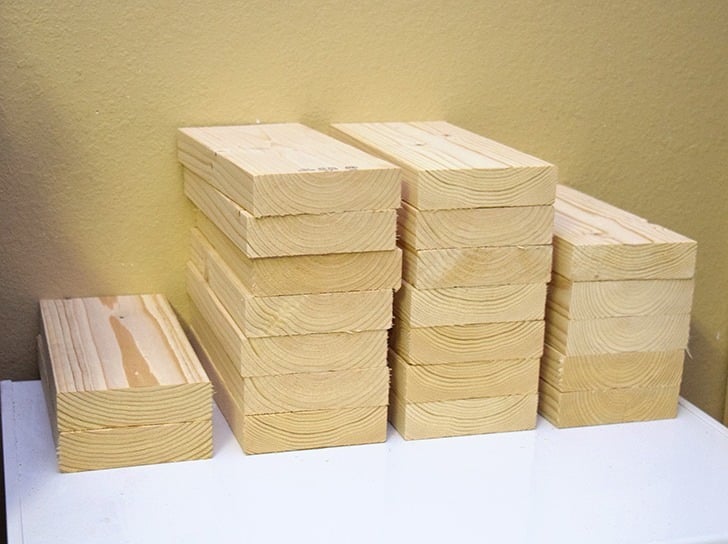 You just need to make a straight cut to make 28 foot long lengths. If you have a fancy saw you can get it that way but if you don’t you can also saw by hand but it will take a lot longer. If you’re not a super perfectionist you can even ask for the people at Lowe’s to cut it for you. Most often they don’t even charge me for cuts if they aren’t busy and that’s an amazing courtesy I really appreciate and took advantage of often before we had a few saws lying around.

Because it gets so hot here during the day Rob was kind enough to cut 28 boards for me as the sun was setting. My job was to mark them with a speed square, he’d quickly rip through them and I’d stack and ensure that it was the same length as the others. It took about 30 minutes total but that’s because I was super picky about them being exactly the same. (Thank heavens for that few, extra feet!) 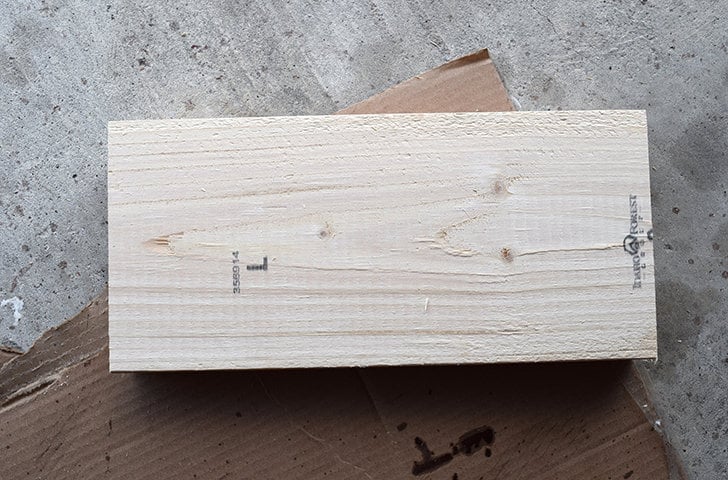 After all of the boards are cut sand each down to remove any marks and to smooth any areas that might cause splinters. The ends of most cuts could use a little cleaning up, too. 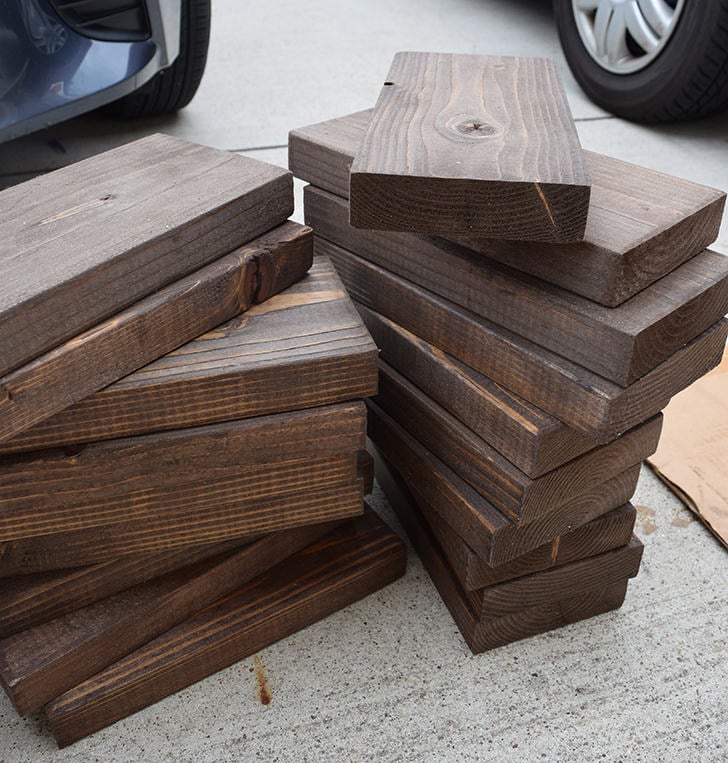 It just so happens that I found 2 quarts of Special Walnut in the garage and that suited me just fine! Each piece was stained in an assembly line fashion. Work however is easiest for you! Allow the stain a few hours to dry. I kept mine in the sun on the driveway and in about 3 hours I was making dominoes! 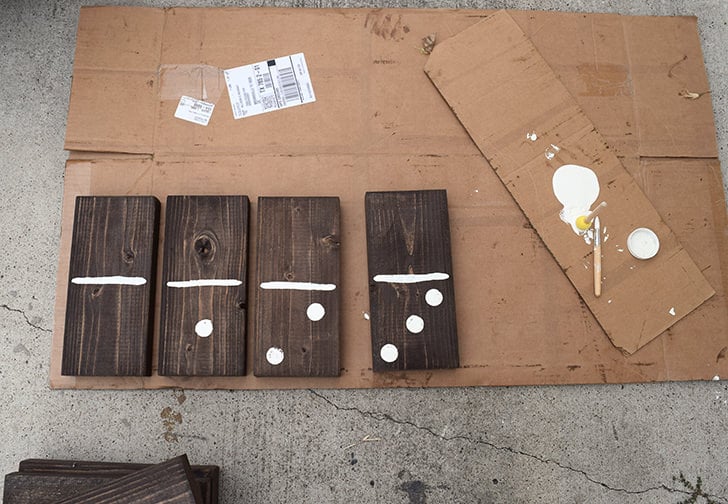 I wanted a more rustic look but if you want something more snazzy you can always make a stencil to use. To go my way just find a large, round pouncer and dab on the appropriate number of dots per side. A quick stripe down the middle is the perfect divider line and it doesn’t need to be perfect. 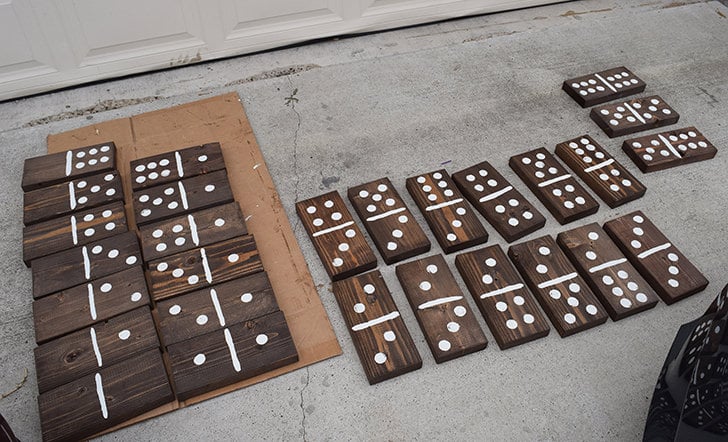 The best way to do this and not accidentally mark the wrong dots is to start with your doubles and work up from there. You’ll need to make: 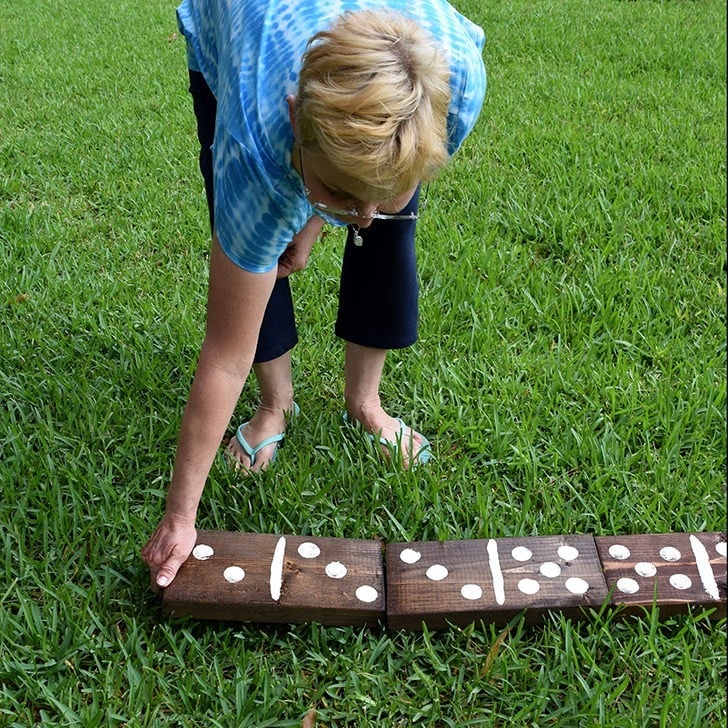 And now we have a full set of lawn dominoes for some amazing fun!

We all ran outside the very moment the rain decided to only drizzle for a few days and the flooding was able to go down (Houston was TERRIBLE recently) and it was nice enough to play outside. After being cooped up inside for a week it was very exciting to be outdoors and Momma and Rob started a game on the front lawn while I snapped pictures and *tried* not to skid around on the muddy grass :)

In the end they both had a great time and both want to play again and I’m excited for the next time when I get to play as well. We’ve decided we love this so much that we just might work on a few more lawn games in the coming weeks (hint, hint :)