We’ve gotten into the habit of watching the Great British Bakeoff pretty much every evening right now. It’s, like, such a big deal that I make my own “bakes” to accompany watching the show in the evenings after supper. I’ve made cupcakes and a buttermilk pie and we made actually paused business to make honeycomb during an episode as we were totally curious as to what it was.

This is where I have learned the word “chuffed”. Listening to contestants proclaim that they were “chuffed” after a good response to their bakes, Rob and I talked about how it actually sounds like a bad word. Not, like, a naughty word, but a word that would mean “unhappy”. But, according to the dictionary: 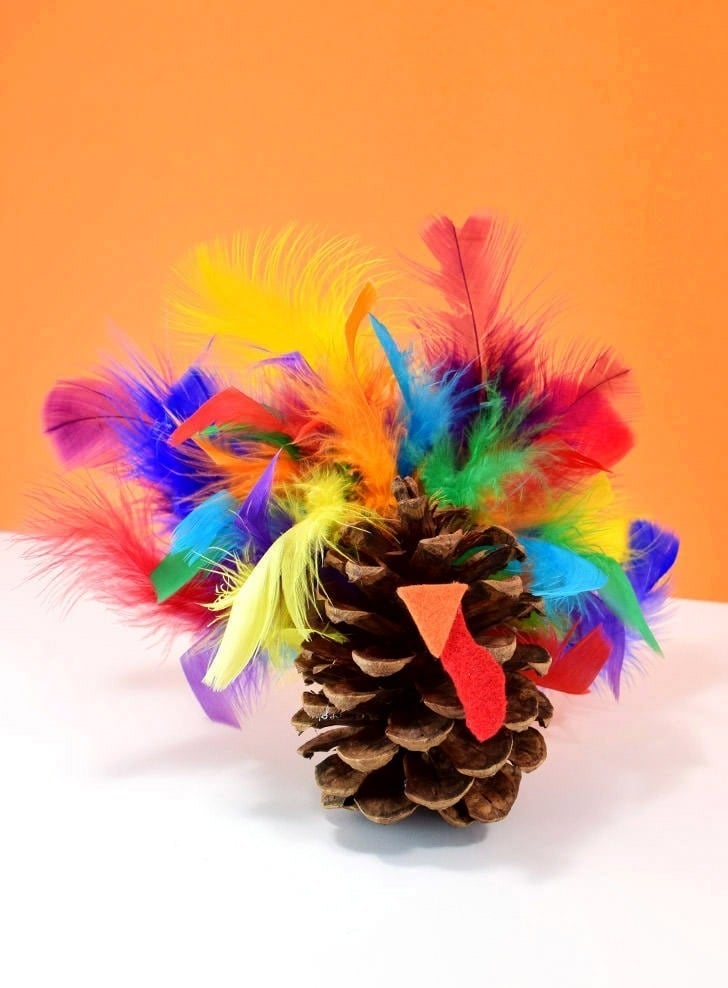 Here’s another example for how to properly use the word “chuffed”. I’m super CHUFFED at how well these pinecones turned out like adorable little colorful turkeys. Haha! Aren’t they super cute, though? And they’re super simple. I’ve made several that I’ve already put up around the house and, subsequently, already taken down because my cat Maybe thinks they are toys and, well, they’re a bit rough looking these days.

If you have kiddos to keep busy, this project is simple enough that they can lend you a hand getting your Thanksgiving spread all dolled up. 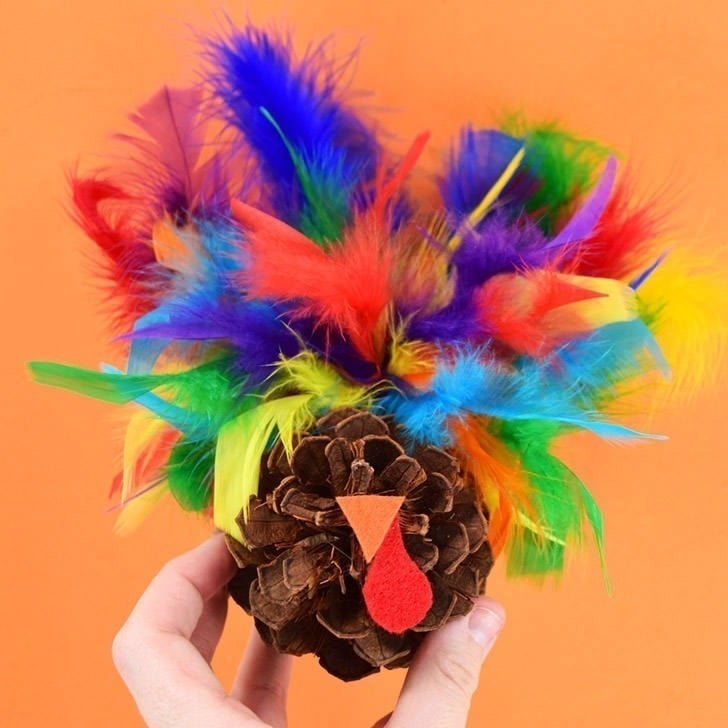 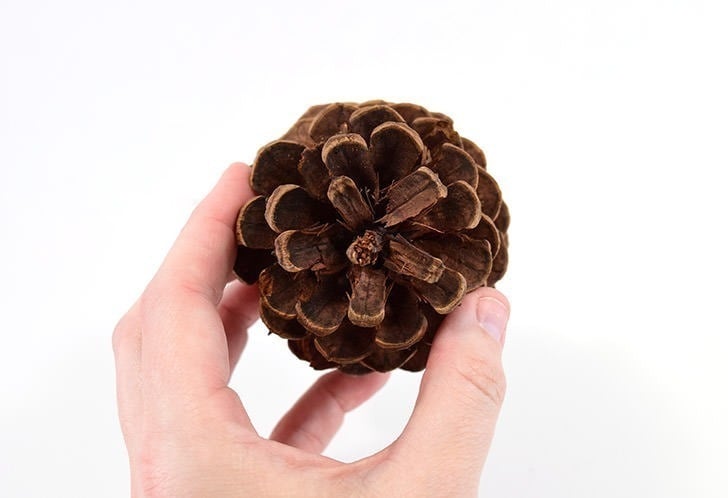 So, as it turns out, pine cones can be quite expensive to purchase for crafting. In fact, a few years ago my sister and I decided we were going to source pine cones from my parents’ yard, where they are abundant and sell those suckers online. But, alas, life got busy and we never built our pine cone empire :) If you don’t have pinecones locally you can pick up off of the ground, you might consider using scented pine cones from the holiday section of craft stores and even Walmart. My cones are cinnamon scented and it’s actually quite nice. Initially, I had ordered pinecones online for about a buck apiece, only for them to arrive and be tiny. Womp, womp. If you buy them in store, at least you know what you’re getting, right? 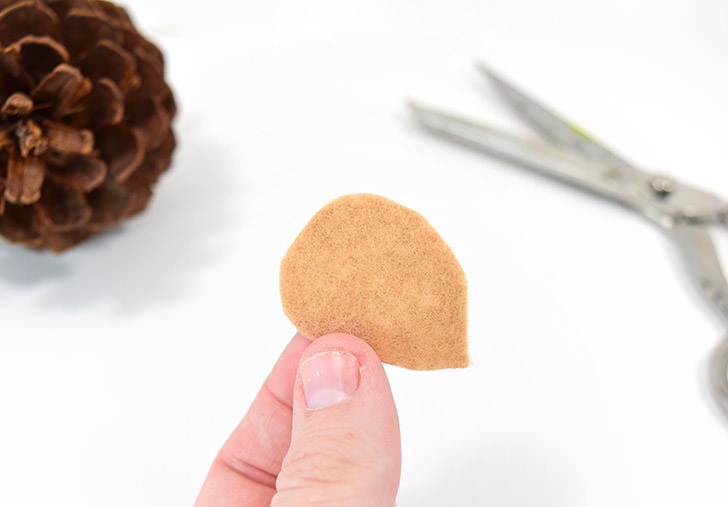 Using a piece of tan or brown acrylic craft felt, cut out a small piece that is shaped like a teardrop or a guitar pick. 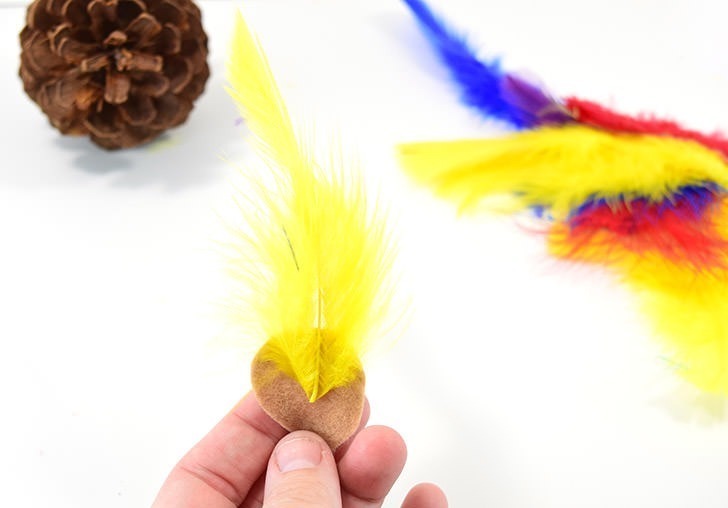 Using the glue of your choice, apply feathers to the felt piece along the rounded side, leaving the pointy side bare (which is beneath my thumb in the pic above). Here I’m using hot glue because I don’t mind not having fingerprints. Just kidding. I used hot glue because it is fast (and I’m on a bit of a time crunch right now) but would have probably used Tacky Glue if I had a bit more time for drying. If kids are helping you out with this project, I’d strongly recommend using Tacky Glue. 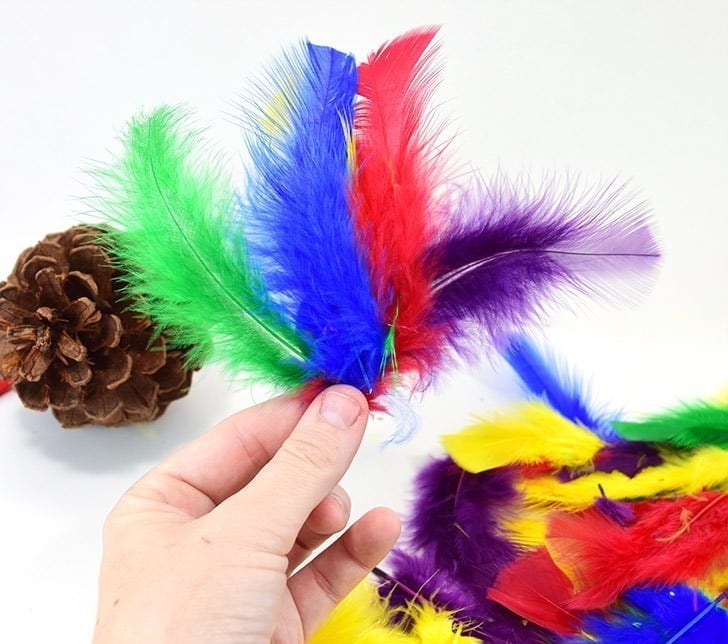 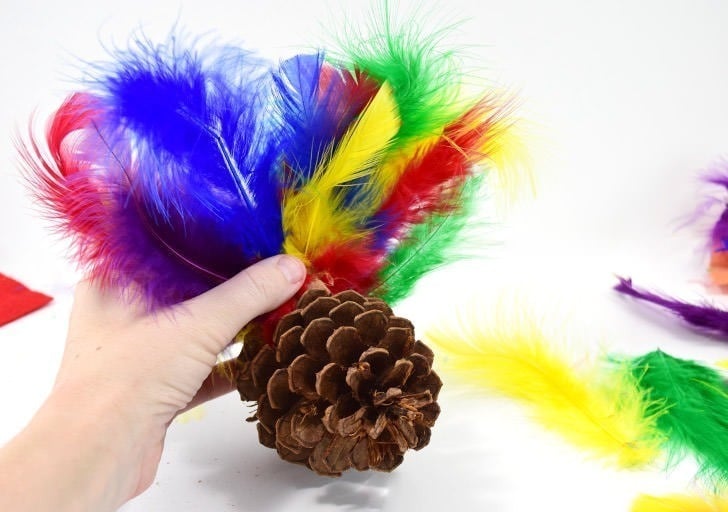 Once you are perfectly happy with your plumage, or chuffed, as it were, glue the pointy end of your felt piece into the top, back part of your pine cone. 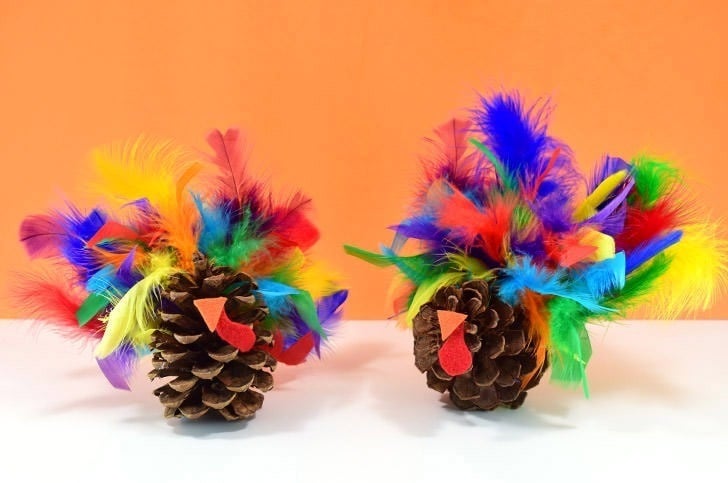 The “where” the plumage should be added will depend an awful lot on how your pinecone wants to sit on its own. See the turkey on the left? He’s sitting straight up, with the fatter end on the ground and the pointier end pointing to the sky. When placing it on the table, this is how he likes to sit best, and I’ve rotated him around so that the prettiest side is facing front, where his face has gone. His feathers were glued to the backside of this cone by putting the glue on the tips of the individual pieces where the feathers touch. The dude on the right, he’s more laid back so he’s laying down. This pinecone wanted to rest on its side rather than the bottom, and so its feathers have been pushed into the nibs and glued near the center inner core part of the pine cone.

So stick your feathers wherever they should go depending on how your pinecone will naturally sit. Because there’s nothing more fun than righting up turkey pinecones all day because they keep tipping over like Aunt Margaret on Thanksgiving. 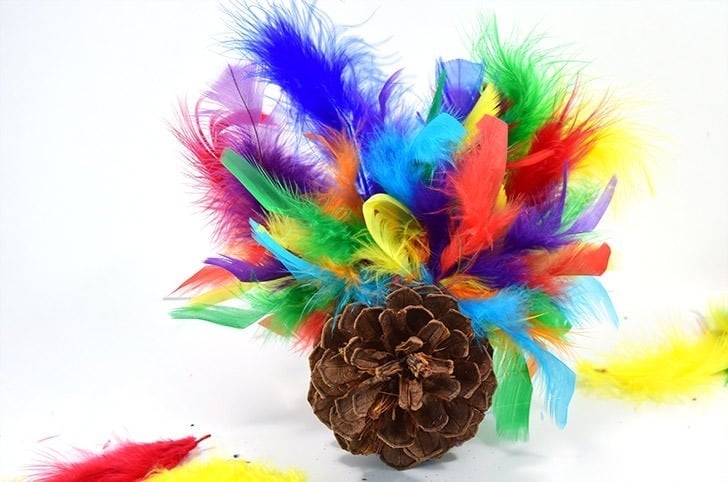 Once you’ve gotten the base feathers attached, feel free to add more feathers in just in front to fill things out and sort of hide away the felt piece. Just put a glob of glue on the quill part of the feather and shove into place. The more feathers the better, I always say. 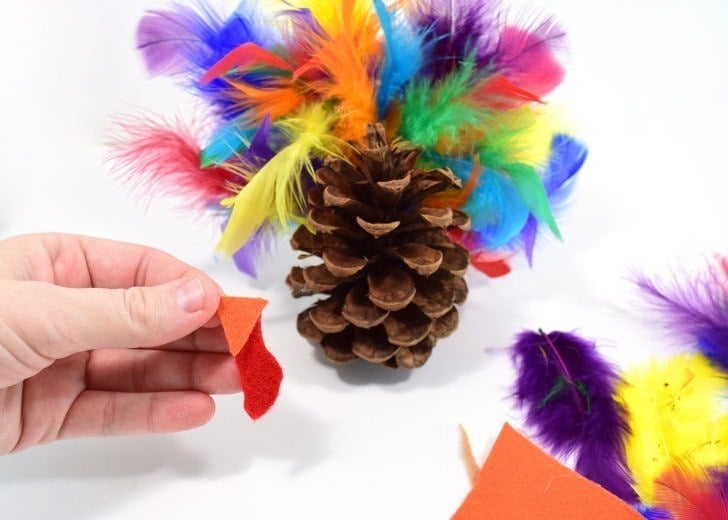 Now cut a little triangle out of orange felt and a red wobbly gobble thing out of red. After a quick Google search, that thing is called the “wattle” not to be confused with the “snood” which is the weird flappy thing that appears OVER the beak (this wattle business is UNDER the neck). The more you know, right?

Glue the red wattle part to the underside of your orange beak triangle and allow the glue to set. 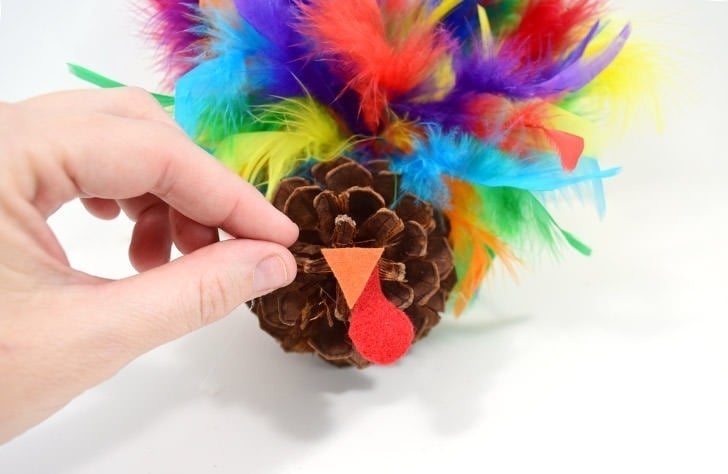 Apply glue to the backside of the beak (but not the red bit so it will dangle) and apply to the end of the pinecone if laying down, or roughly where the head would be nearer the pointy end on any pine cones that are sitting up. 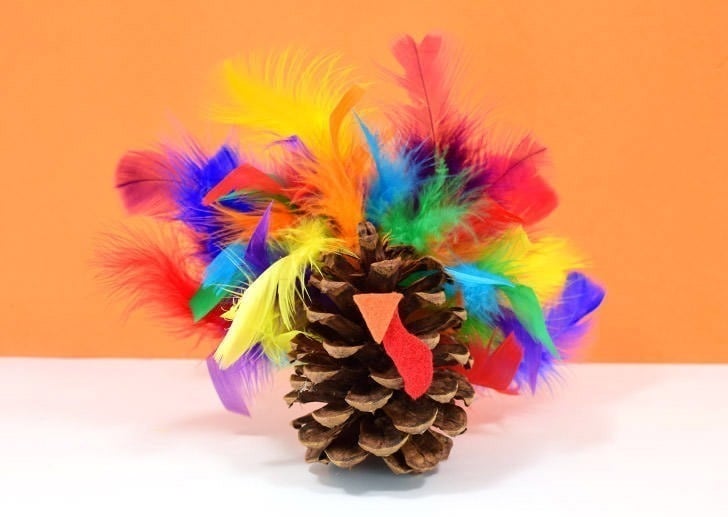 Just now looking at this guy I’m thinking a pair of orange pipe cleaner legs peeping out might be super cute, so you might want to add those. I had considered adding googly eyes, but they looked a bit sillier than I was hoping for. I mean, we’ve got all of the bright colors, already, and there’s nothing serious about this craft, so stick some eyes on there, too, if you please.

All in all, this little project was super easy and the results were super cute until my cat got them. Grab the kids and grab the feathers and make some to tuck in around your Thanksgiving spread and they’ll add a touch of whimsy to your table I just know your guests will appreciate :) 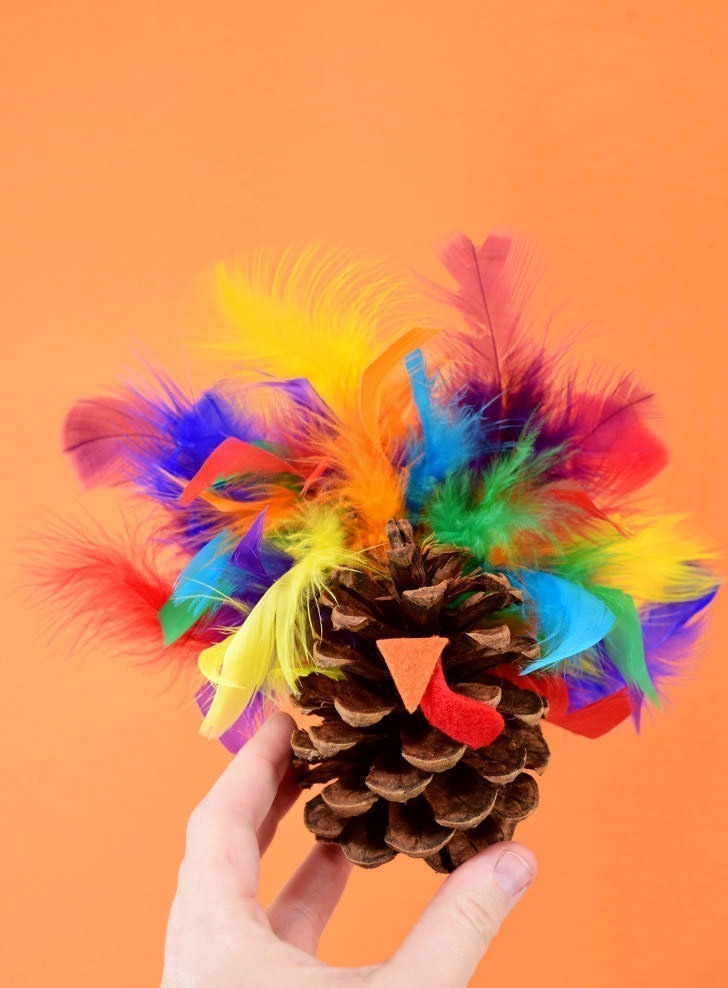