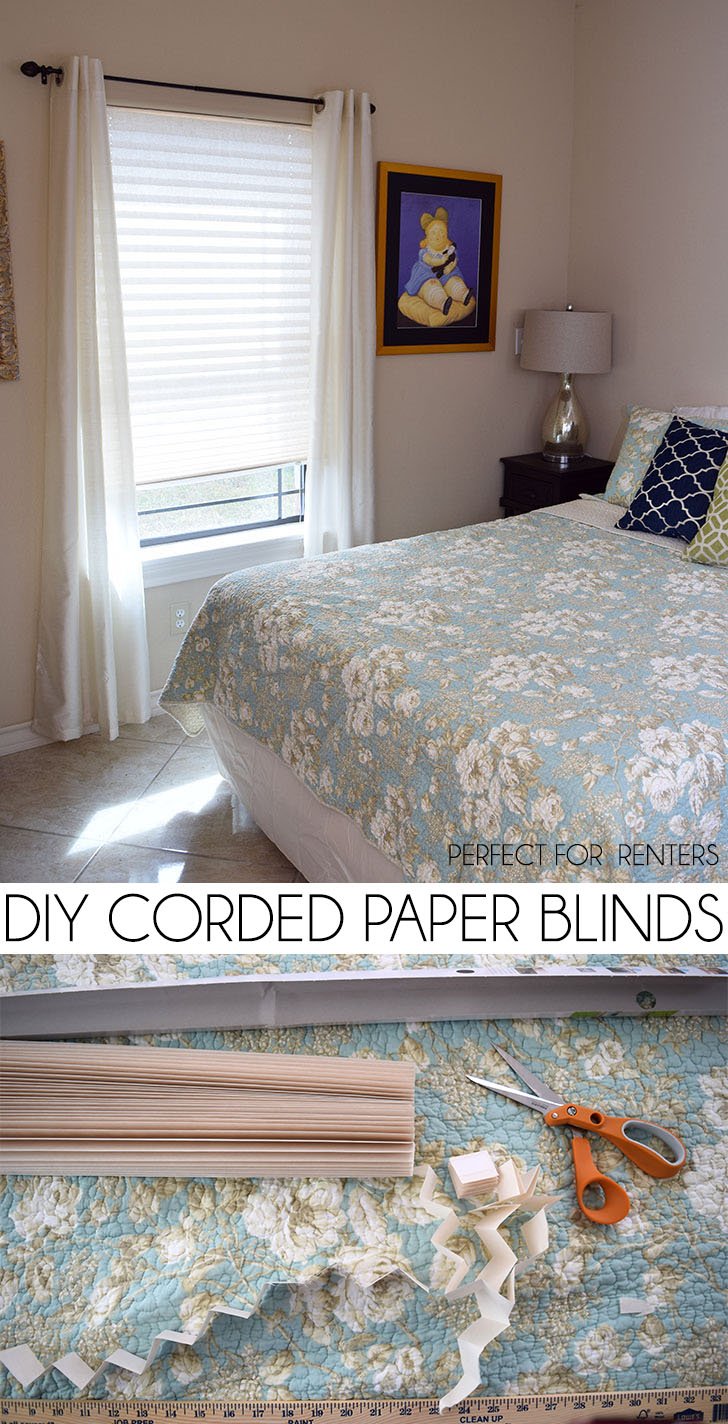 So I’ve been renting for over a year now and I have to tell you, its not really my thing. I’m having a hard time remember that I can’t just fix things. I’m digging around in the fuse box and messing with the air conditioner and wondering “how much is THIS gonna cost me?” while I’m sweating my face off when I remember, hey, I’m a freaking renter.

That’s the good part about renting. Before it all clicked I was actually checking my savings and checking accounts to see how much I had because I was envisioning a several thousand dollar problem because, in my experience, A/C issues are ALWAYS expensive.

The not so good is that you can’t do tons and tons as far as fixing up the place goes. The walls need to be painted and I can do it, per our lease, but it would wind up being a waste of money in the end. I mean, what if Rob gets a new job tomorrow and we have to move? You can’t recoup the costs of anything you spend on a rental.

Most of the windows in this house do not have blinds and some of them are kind of oddly shaped. So last year when I was trying to quickly get these windows covered I used paper blinds. Paper blinds are so cheap and you can cut them with scissors. They have a sticky strip so you can basically tape them up into your window and they stay (for the most part). 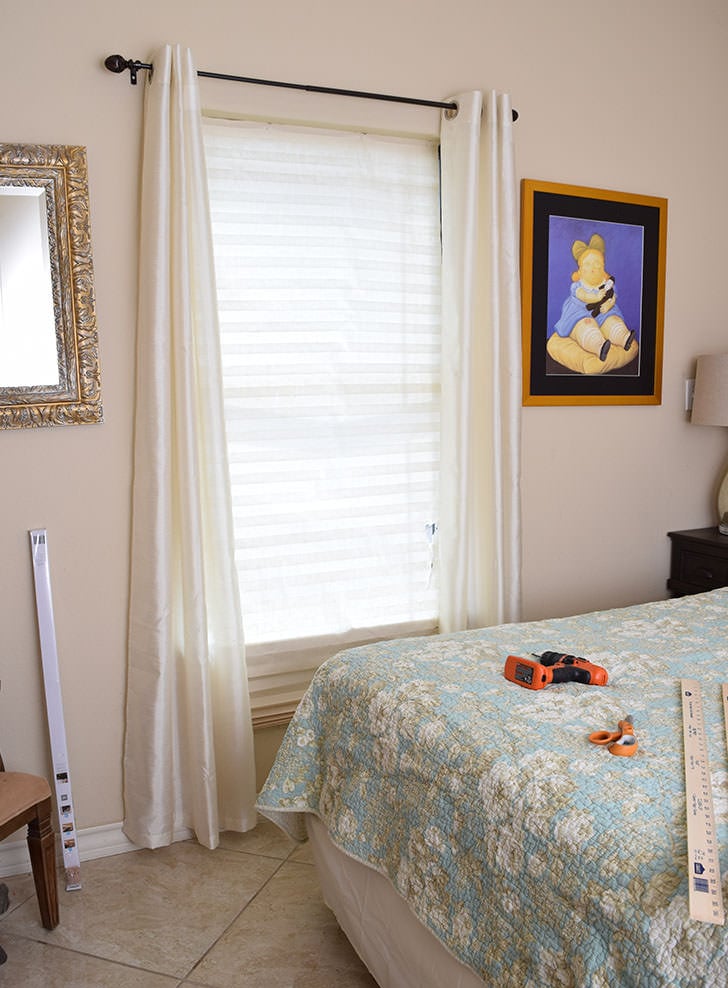 Now we’ve had these blinds that are in the window in the pic above since last year so they’ve done really well for being just paper. But see there on the side? Marla decided she wanted in the window and she tore at the blinds until she could get in there. I figure if I leave the blinds up about 7-8 inches no one will be able to see in but she can slip in there easy as pie. *** Update – it didn’t work. Something insane went down the first night the new set of blinds were hung and they were ripped down the middle. UGH. 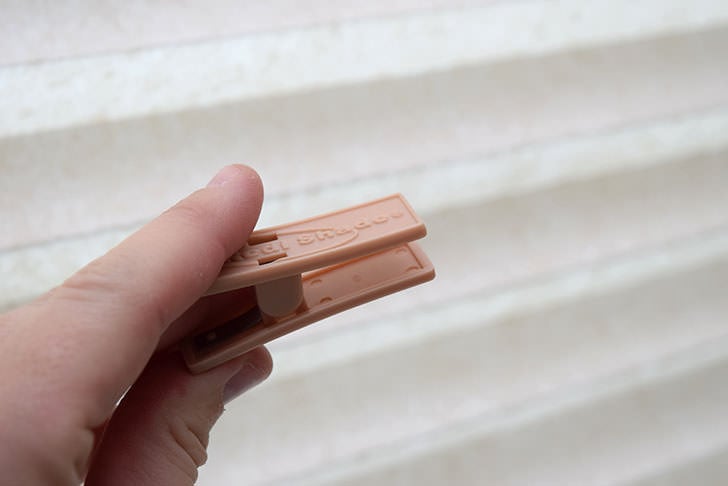 With the paper blinds you get these little clips to keep them in the up position. But the thing is you have to gather and pleat and shimmy those suckers up every time and then clip them in place, which is fine for every once in a while but kind of stinks when you’re doing it to 5 windows every day. Add in the cat factor and the clips go missing like nobody’s business meaning  you have to use something like clothespins, which, my dog likes to steal.

Now I first tried this out in my office to just one window in the middle and it worked brilliantly. Like, it’s in perfect shape since I did it about 2 months ago and so that’s why I decided to tackle the bigger windows. But, dang if Marla didn’t destroy my work in less than 24 hours :) I have no CLUE what happened but, apparently, Rob heard a big commotion and then he found that scene last night. Marla wasn’t seen at the crime scene but she’s the only one adventurous enough for that sort of nonsense! 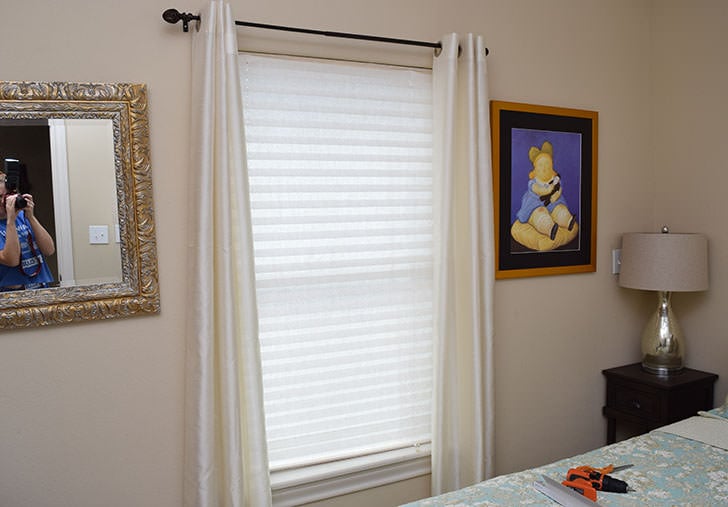 So, by and large, I would recommend this project for cat owners because it’s worked out well for me for months, it’s just we had some random crazy thing happen last night. I’m going to redo this sucker and I’ll update after a few weeks if it was a disaster all over again, or some crazy one-off! 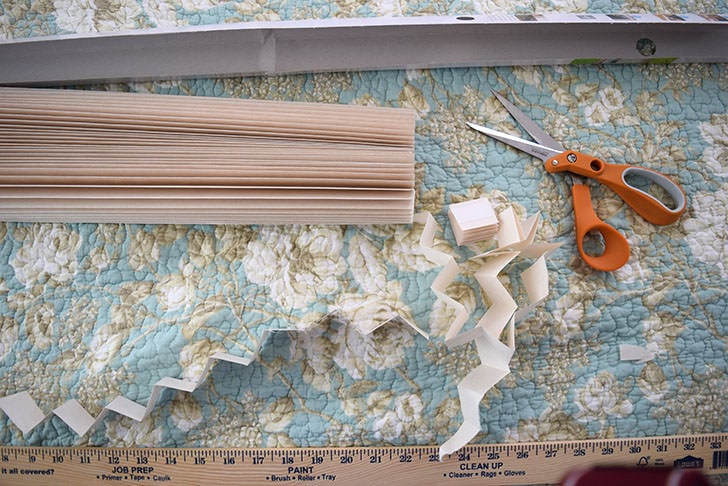 First measure the inside of your window and cut the paper blind to fit using scissors. Now, isn’t that nifty? SCISSORS! I remember ordering faux wood blinds for my first home and it was EXPENSIVE and some sizes were awkward and had to be custom made to fit. This is stupid cheap and so easy compared to that! 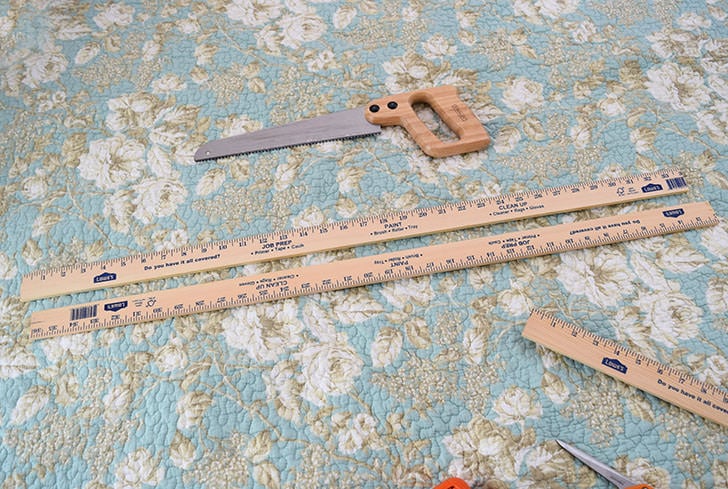 Trim your scrap wood to an inch shorter than your paper blinds. I’m using yardsticks because I bought a freaking ton of them a few months back for a project and never returned the excess. 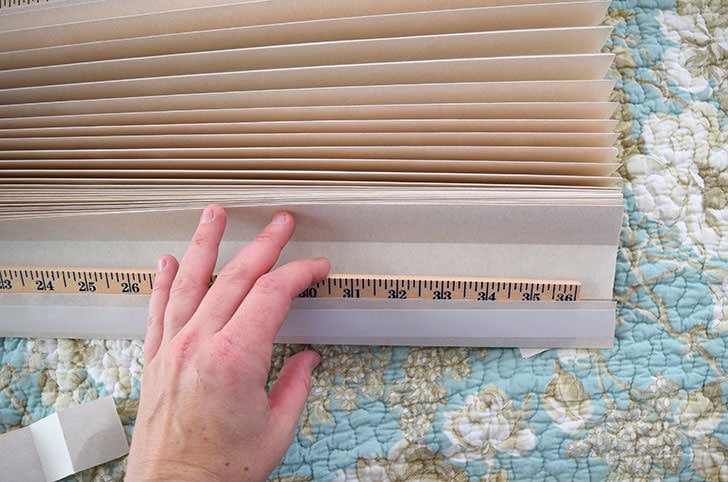 Hot glue the wood scrap inside of the top and bottom folds of the paper blinds. 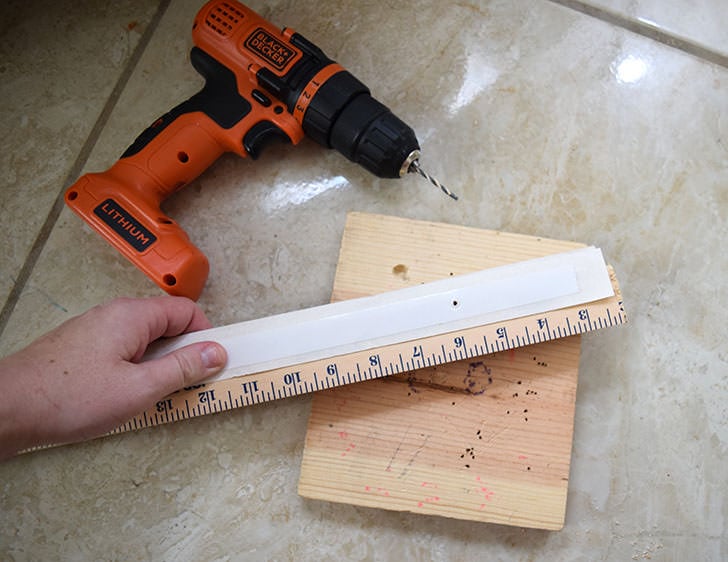 Drill through both of the wood slat inserts and all of the paper blinds in one, clean pass. Do this within a few inches of both sides of the blinds. 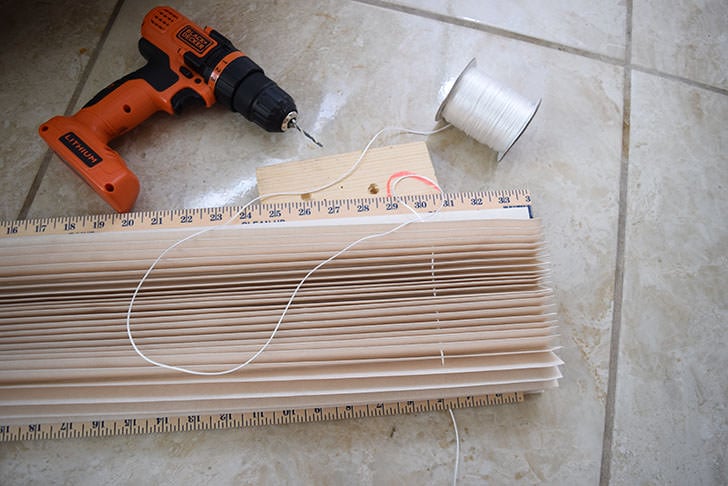 Run sturdy cord through your drilled hole a few inches longer than the length of your window. I used rattail from my Kumihimo days but on my first go I used crochet thread and it worked well, too. Run the cord through a fold near the top, at the back of the blinds and down through the other hole. If you want to bring it up through your slat of wood, for a sturdier hold you can use something like a craft knife or a Dremel tool to rout out a gutter for the string to be able to move through. 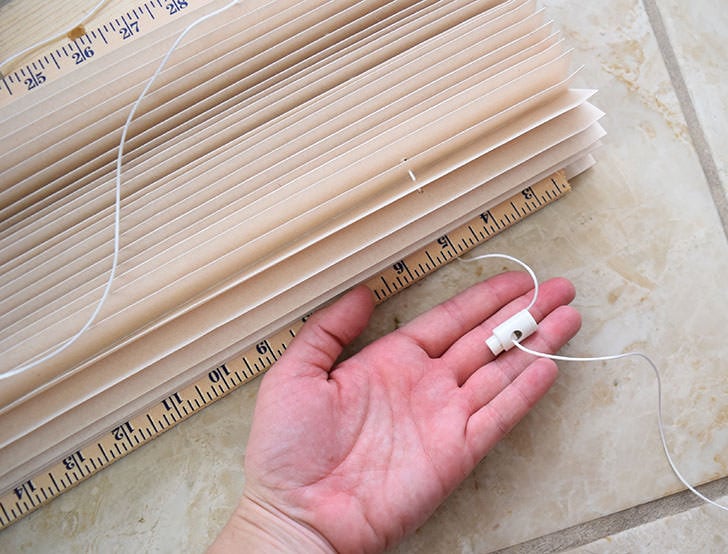 Run your toggle onto the cord to keep it in place. 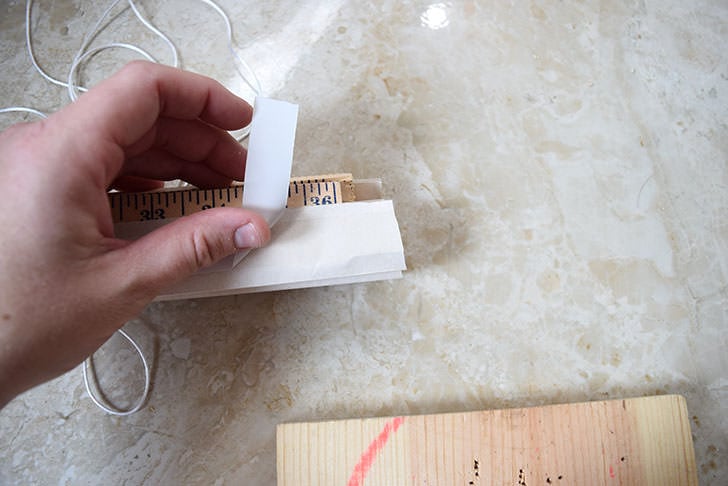 The top layer has a peel and stick section to install the blinds. Now if your climate is humid this sucker is not going to stay even if it’s just straight up out of the packaging, no extra weight added. In the past I’ve used clear pushpins to help keep these guys in place and that works well but you might need to drill small holes through your wood slat and secure your blinds into the window casing. 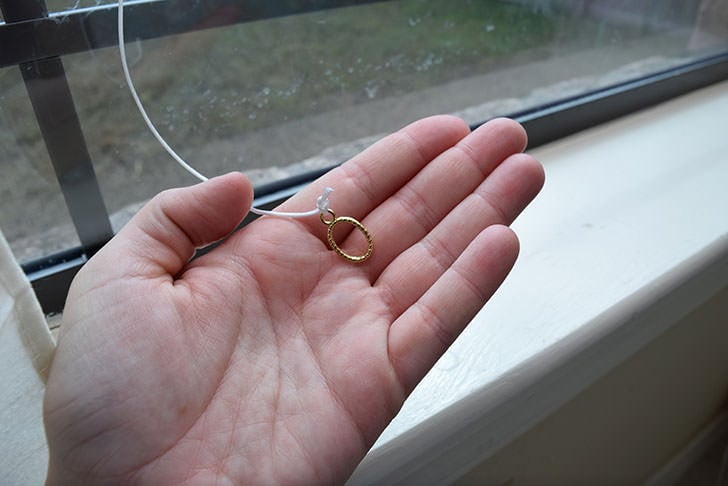 Once your blinds are installed tie something onto the end on the second string to keep from losing it. I used an end for a toggle bracelet clasp that I lost the other part to.  Yay for repurposing! 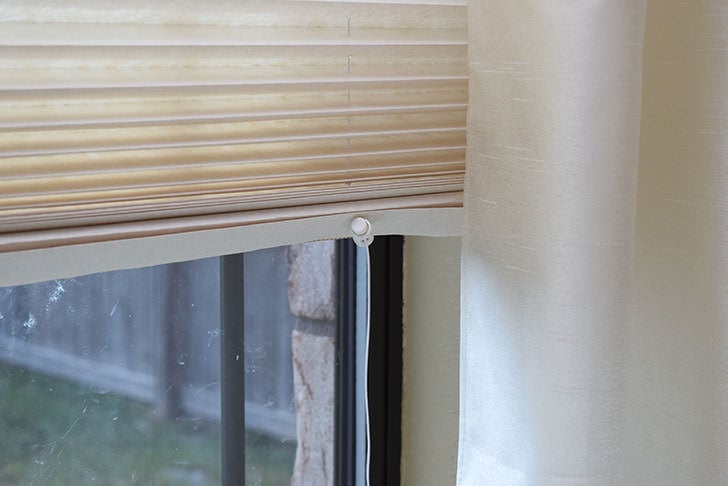 Now I tried putting a toggle on both sides but that just makes things  hinky and weird. Like, you’re pulling them up and then the one side shoots way up and the other side doesn’t want to and then you’re messing with it and it’s more trouble than just clipping the dang things. The stopper on one side is where it’s at, I promise :) I’m off to buy another set of paper blinds to hang before Rob’s parents get here for a visit later today. Wish me luck that Mar leaves this set alone (WTH?) 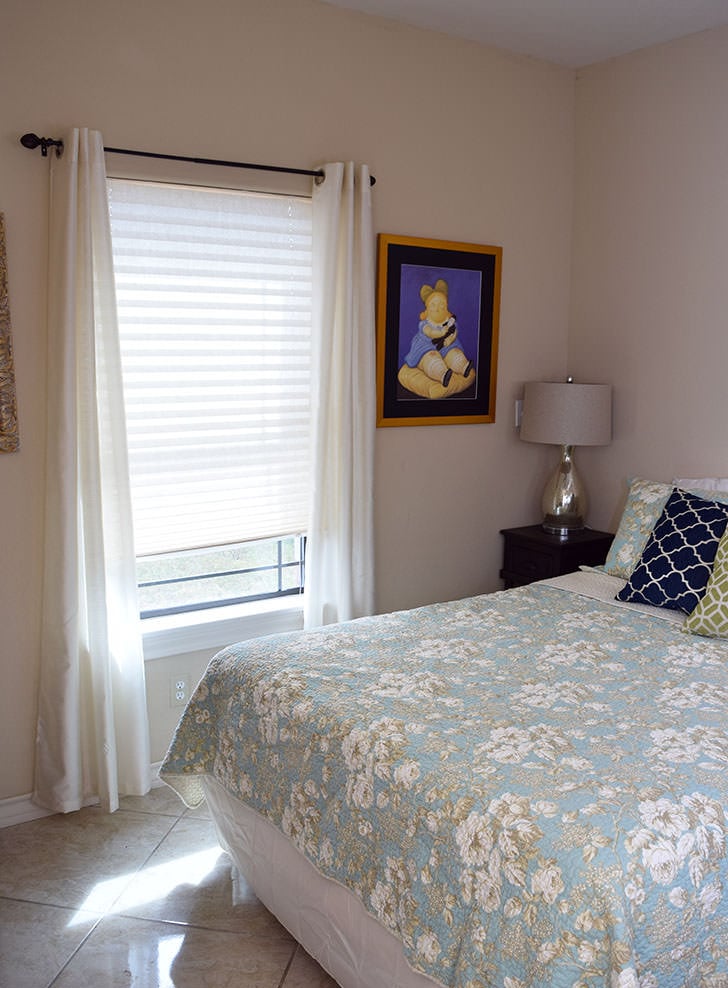