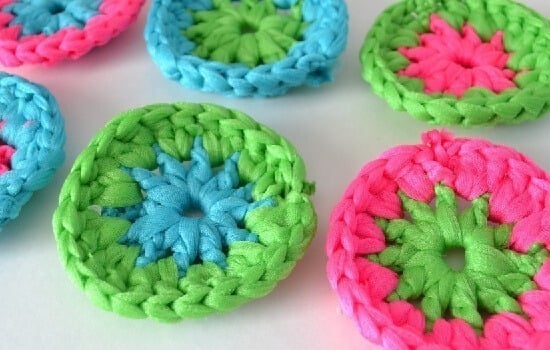 I don’t like sponges being used in clean up situations… I’ve just heard way too much about germs that live up in them. But I do like scrubbies. We had a whole pile of the thing that were given as a gift. It was easy to see that they were little crocheted circles of maroon and hunter green, but I couldnt’ figure out what the material was for the life of me.

Me being me, I have to go over and talk to this chick and get the skinny and I’m informed that you use the tulle like you would yarn and crochet rounds to make pot scrubbers. I grabbed a neon pink, green and blue right there on the spot.

Why neons? Because when things are busy (like they are with a craft blog to run) I’m really, really bad at doing laundry. Well, not so much the doing as the putting away. There is a humongous pile of clean clothes on my loveseat as we speak. A veritable mountain’s worth. Tonight when I go to take a shower, I’ll have to dig through the pile to find a nightgown. Tomorrow when a scrubbie needs to be found to do dishes, you guessed it, dug out of the pile. So I went neon hoping that they’ll be much easier to find. Because historically, little itty bitty black and maroon suckers have been pretty darn elusive. 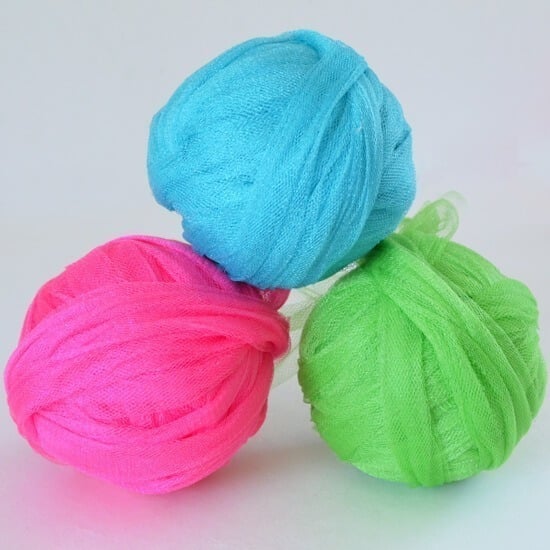 First you’ll need to ball up your tulle just like you would yarn. Need help? Learn how to ball it up here.

You don’t have to do this step, but while you wind it up you kind of condense it which makes it considerablly easier to crochet with. I went both ways, straight off of the spool and balling it, and I have to say that balling it is definitely the way to go. 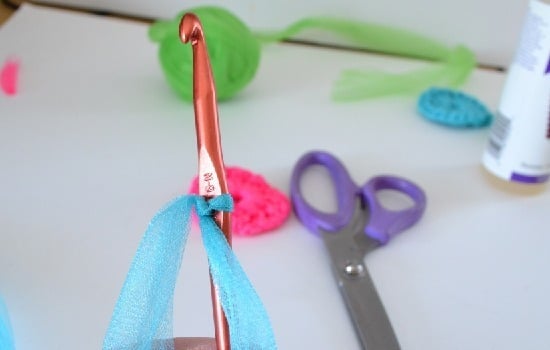 First tie your tulle onto the your hook at the fattest point to make your loop. Be sure to leave a decent length of  tail. 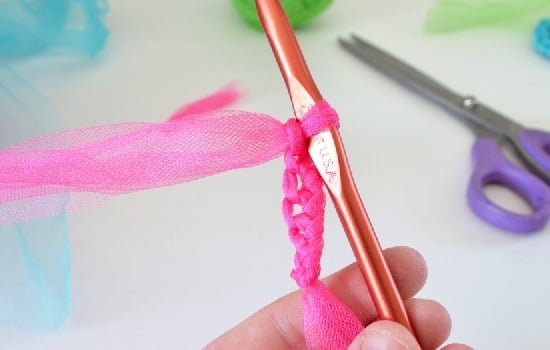 Chain 6 times. Don’t worry if they don’t look perfect because we’re going to be covering it up anyway. 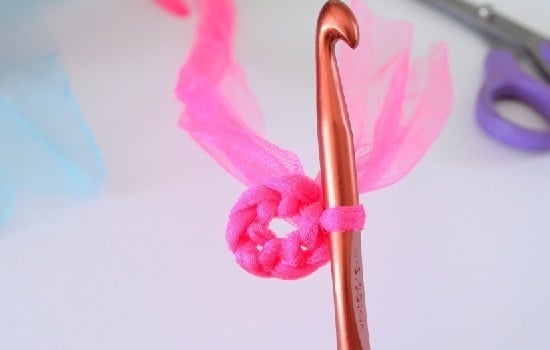 Use a slip stitch to connect to the first chain and create a loop. 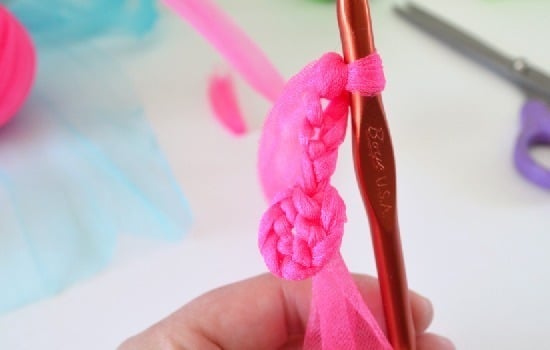 Chain 4 and then double crochet into the circle. Chain one. 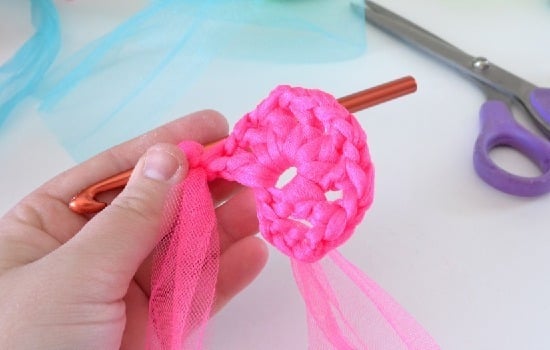 Continue to double crochet with a chain in between each for a total of 12 spokes (11 double crorchets + the first chain of 4 will act as your first double crochet). 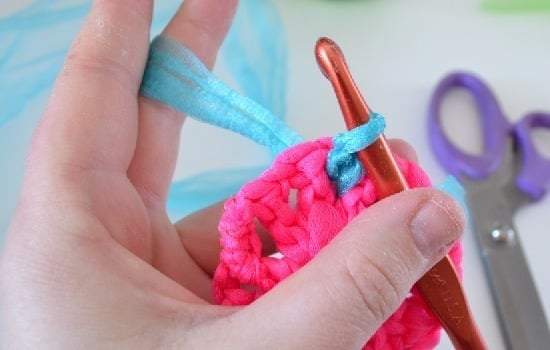 I changed colors each round to make them a bit more exciting but it’s totally optional. Take your tulle and tie it onto your hook at the fattest part to make your loop. Again leave a decent length of tail. Push through a gap in the first round. 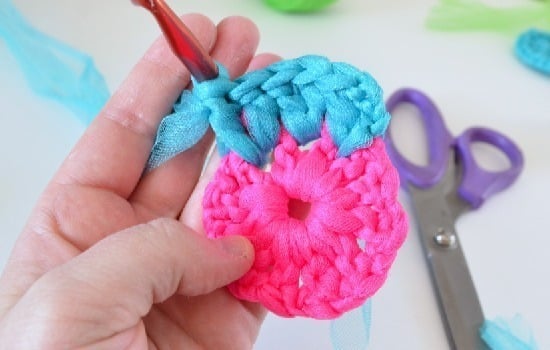 Double crochet TWICE in each gap with NO chains in between for this round. 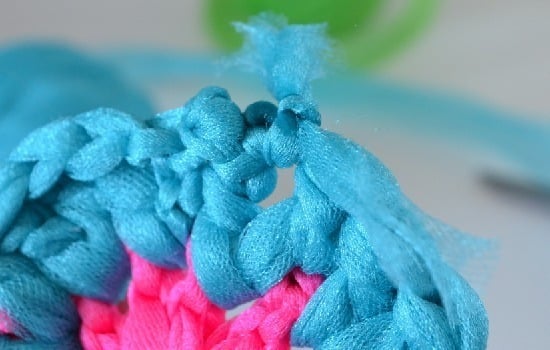 Take your tails and wind them through to the edge of your crochet. Tie a knot with that tail and the tulle left at the end of your hook. Knot that sucker like crazy and take some heavy duty fabric glue to reinroce the knot. Really daub that stuff on there and allow to fully dry. 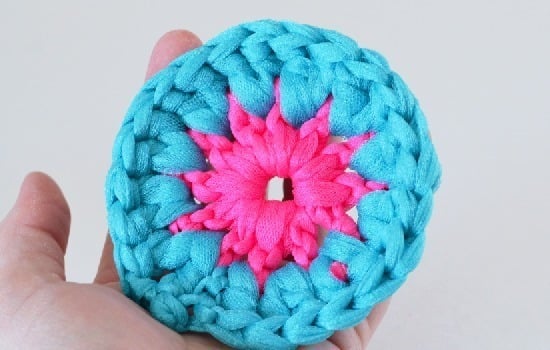 And there she is. One down and a few more to go.

So far I’ve made 6 out of 3 spools of tulle and I think that I can get another 3 out of what I have left. They’re really nice and thick and have a good size. 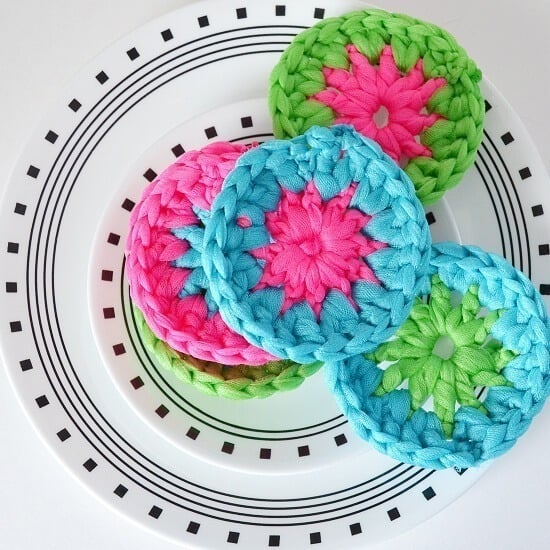 I purchased my tulle from Hobby Lobby. They were marked $4.99 but I got them on sale for 50% off. It would technically be cheaper, I think, to purchase tulle by the yard and cut into six inch strips yourself but I wasn’t down with all of that extra work… 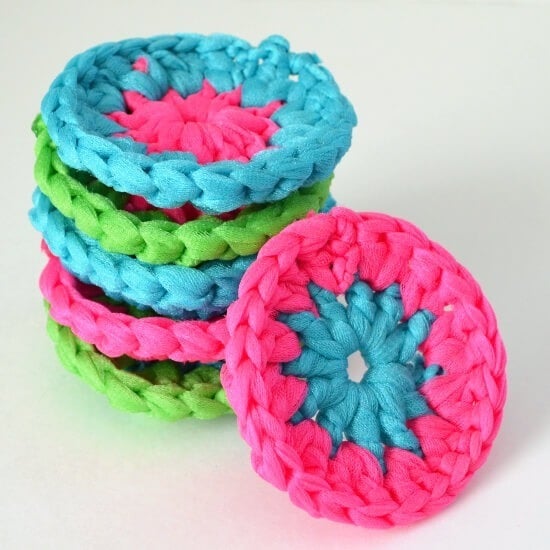 These guys have already been put to work and I’ve got to say, they’re definitely worth the effort. The scratchy tulle will jack up your hands, though, so be sure to have plenty of lotion around. Toward the end I was knocking out one every 15 minutes or so. Not bad.

What do you think? Will you be knocking up some of these handy dandy little kitchen helpers? Happy Monday!