Man, oh,  man, I went back home to Oklahoma for Christmas and I have got to tell you, even though I wore long underwear every single day, I was totally unprepared for the cold. I had gotten a text message from my sister saying my nephews and mom were all fiercely anticipating seeing Mr. Rob and I freak out at the crazy cold temperatures they were experiencing up there. And Rob and I laughed and laugh. Because it’s funny because my mom’s a big baby about the cold, too, but having been up there already a few weeks she was already used to it. :)

It felt kind of crazy running around town where it was about 80 degrees or so trying to find long underwear and sweaters but that’s what we did for an entire day. After paying $40 for a pair of sweatpants I finally texted my sister asking if she could grab me a few pair of $6 Hanes sweatpants from Walmart because as we left the store I started to think that kind of money speant was just freaking ridiculous! 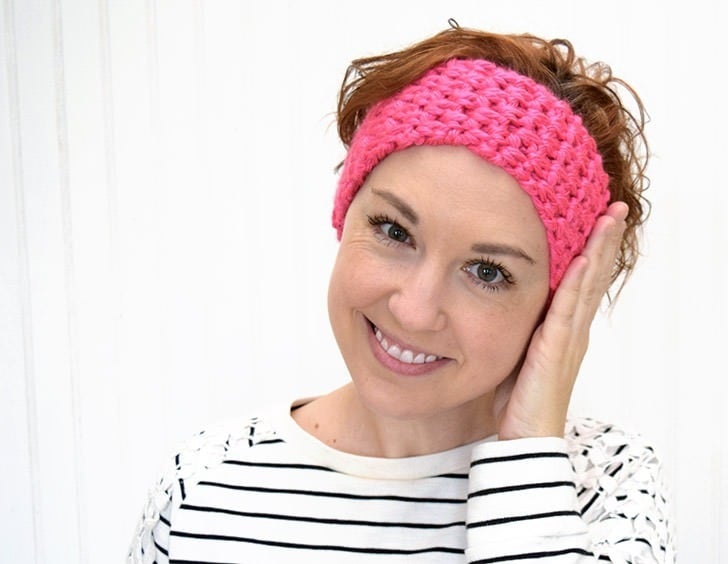 While I was in Oklahoma I completely forgot about keeping my head and ears warm and, I’ve got to tell you, my ears felt like they were gonna burn off half the time. Funny since it was so cold but either everyone experiences cold in this stupid way, like fire instead of ice, or I’m just special. Every time I went to the store, and with my family, there were PLENTY of those instances, I completely forgot to grab anything and so my ears suffered. But I realized I had some yarn in the car and so I worked on an ear warmer pattern a little bit here and there. What I came up with works up super fast because I used Lion Brand Hometown USA yarn which is thick. It’s also cheap. And crocheted up like I’m about to show you, it’s also stretchy so you don’t have to try to pull this tight business over your noggin if you happen to accidentally go a little small. 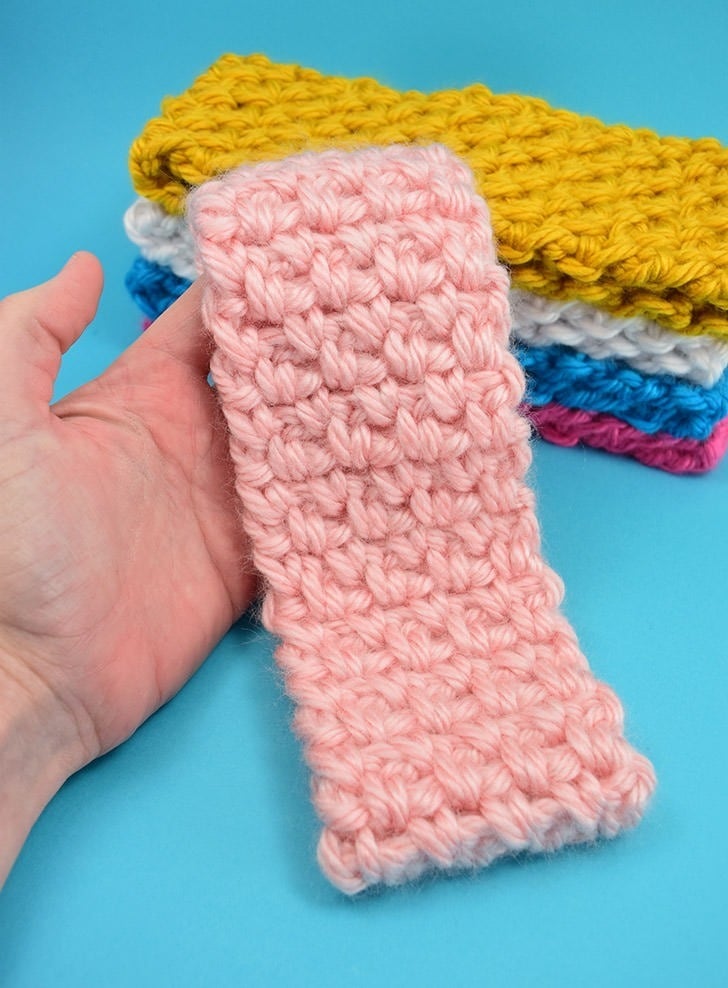 Back to the yarn, Walmart carries Hometown USA for around $3 a skein and I could make 2 ear warmers per skein with enough length left over for a healthy addition to your yarn stash.

Want to see how to knock one of these suckers out in the time it takes to watch a TV show? 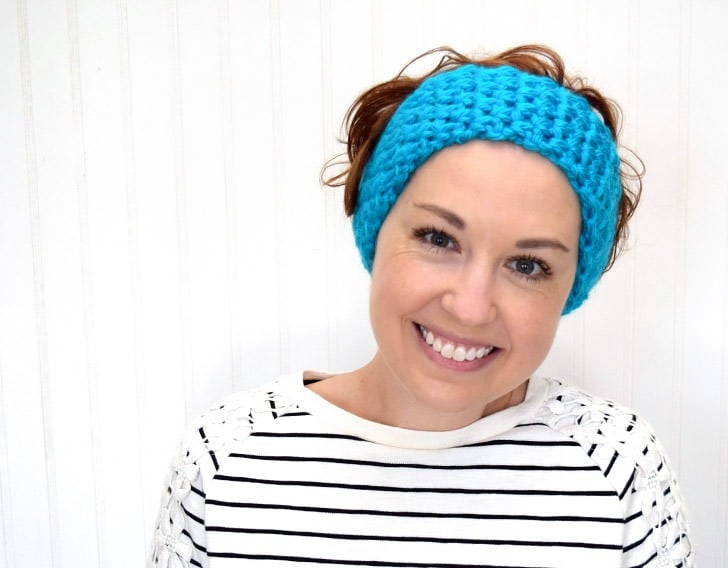 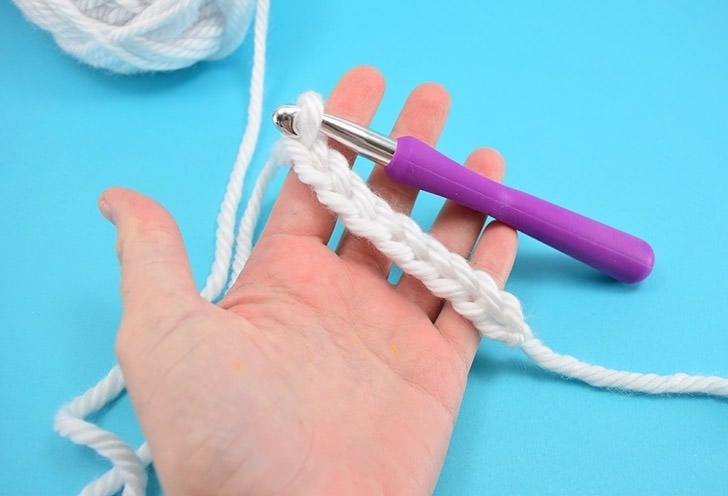 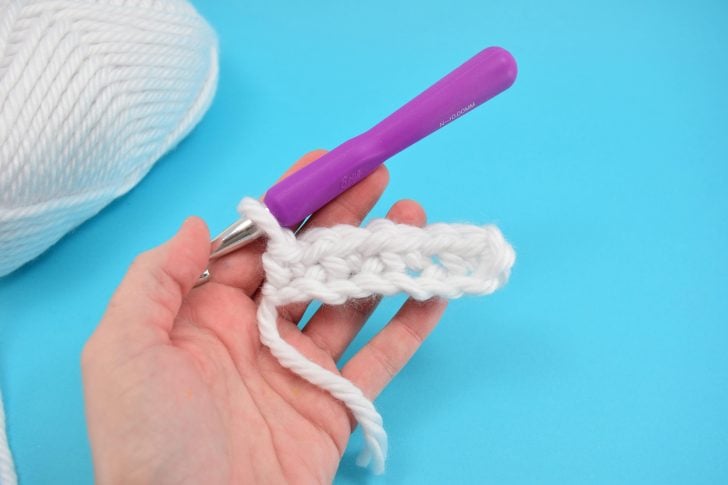 In the third chain from the hook single crochet. Chain 1. Now you’re going to single crochet in every other stitch with a chain 1 in between until you reach the end. At the end, you’ll have made 4 single crochet stitches.  Chain 2 and turn. 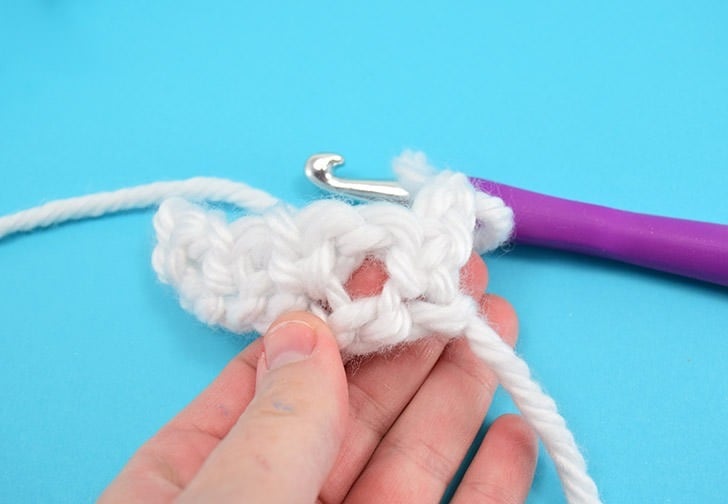 * Single crochet in the first gap from the previous row and chain 1. Repeat in the next 3 gaps for a total of 4 single crochets. Once you get to the end chain 2 instead of 1 and turn your work.

Repeat from the * until you’ve reached the desired length to fit around whatever noggin you’re hooking this for. For most adults that number is going to fall in between 16 an 18 inches, which is shorter than what you’d create for an ear warmer or headband made in the round. That’s because we are creating a crochet fabric with some good stretch to it. 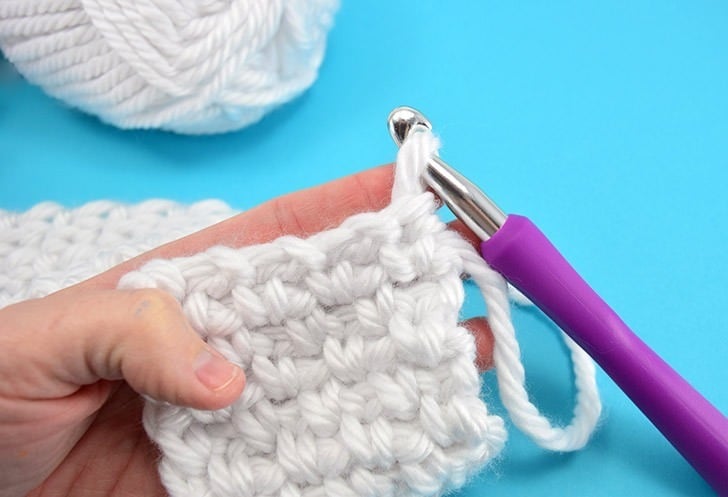 Which reminds me, as you work, every 4 or 5 rows give your piece a little stretch. This crochet will inevitably stretch out a bit and only snap back so much. If you work that stretch out as you create the piece it won’t go wonky and become too large the first time it’s stretched to be worn. Make sense?

Now, for my own head, I’m stitching a total of  17 inches in length which is about 3 inches shorter than what is recommended for the minimum for an adult ear warmer. Again, it’s all about the stretch and in order for it to fit nice and snugly you’ll need it to be a little smaller than your head.

Now I have no idea what other people’s heads are sized like, except that heads are exceptionally large in my own family, so I went over to Make and Do Crew to see if Jess knew what was up, and she absolutely did. If you need some assistance with sizing an ear warmer (or headband) from 0-3 months all the way up to adult head on over to her crochet headband post and get your measurements.  There’s also a nifty graphic you can pin to help you remember later on. Now, remember that for THIS stretchy ear warmer you’ll want to subtract about 3 inches from the usual length you’d create for a headband made in the round so your ear warmer properly stretches when worn… 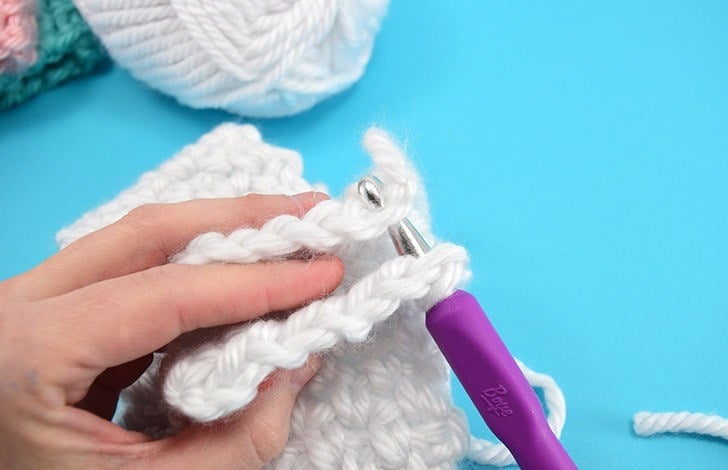 Once you’ve got your length it’s time to cone time your starting row with your finishing row for a nice round loop. Place the 2 ends side by side… 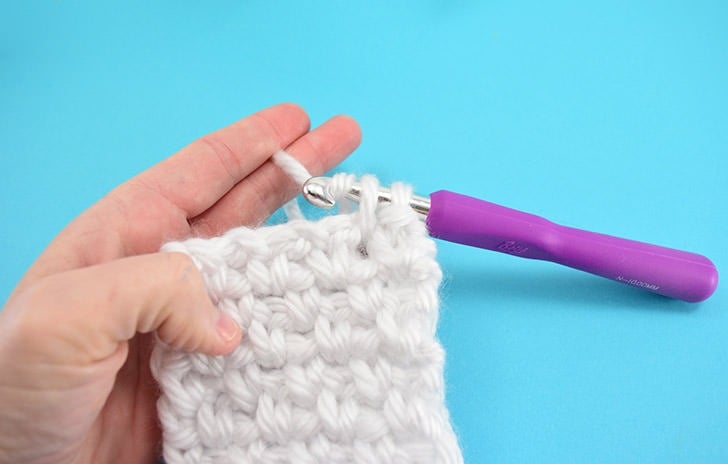 …and slip stitch the 2 ends together. 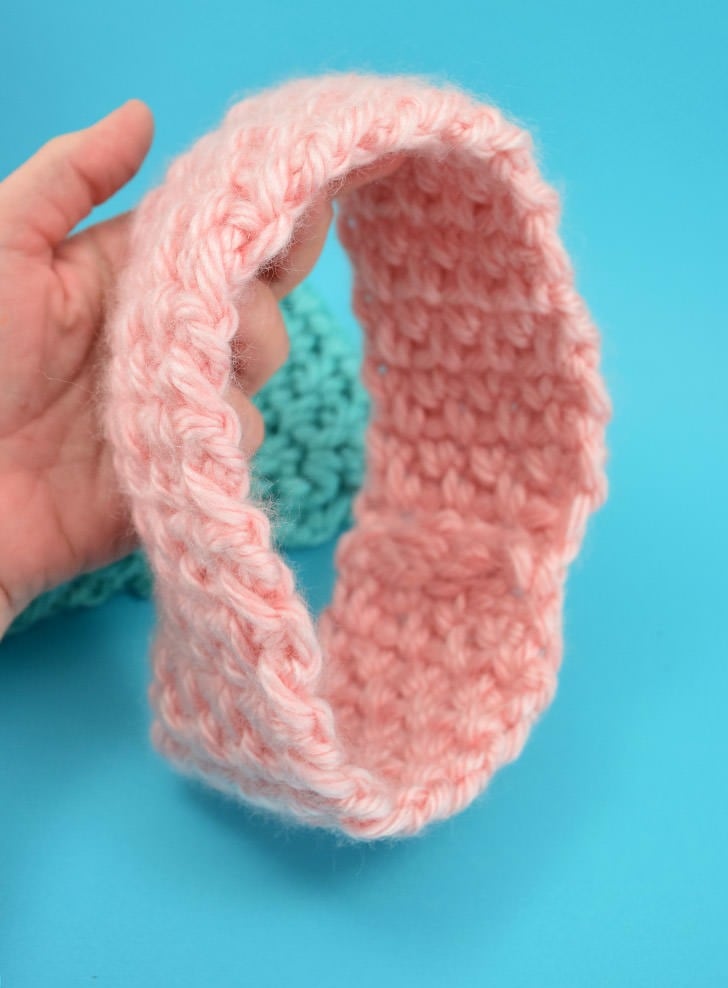 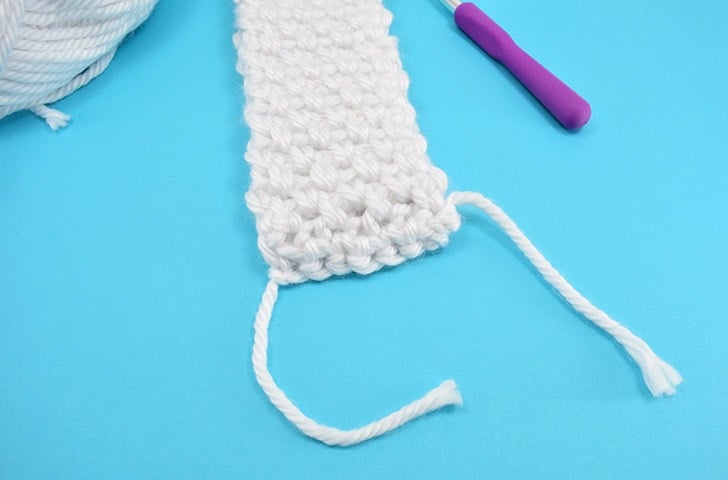 Once you’ve closed the 2 ends to form one piece knot off the end and leave a 2-3 inch tail. Weave in both your starting and finishing ends. 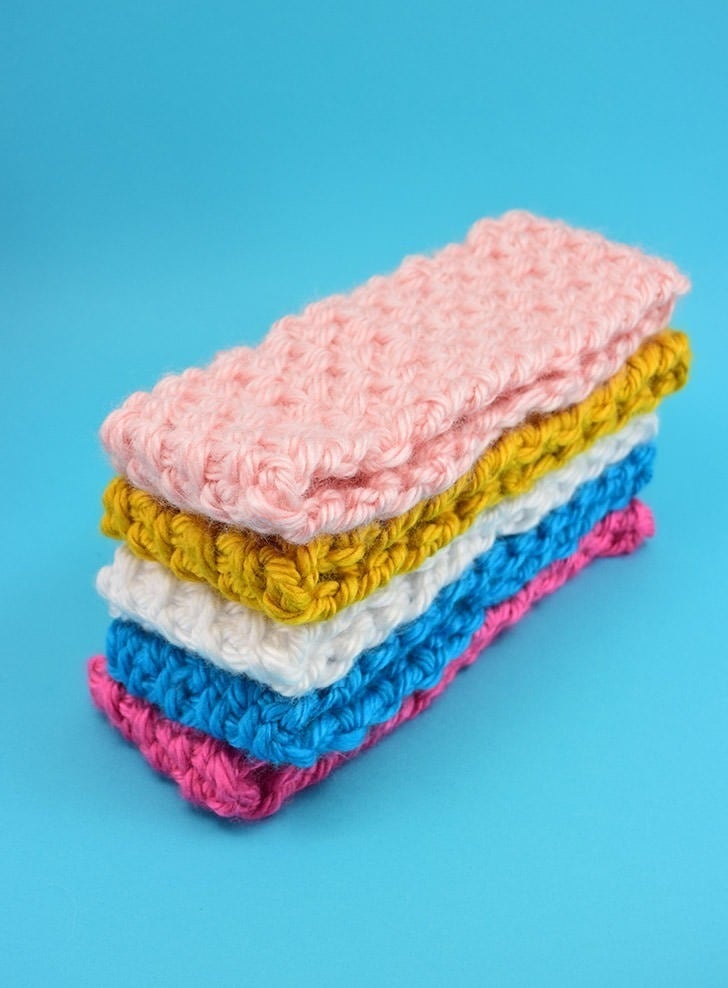 Bing, bang, done. Learning the pattern aside, once you’ve got the groove you can whip an ear warmer in 30 minutes easy. Isn’t that awesome? In fact, I liked making these so much that I binged a little bit of Netflix and made one in each color of yarn I have in the stash! 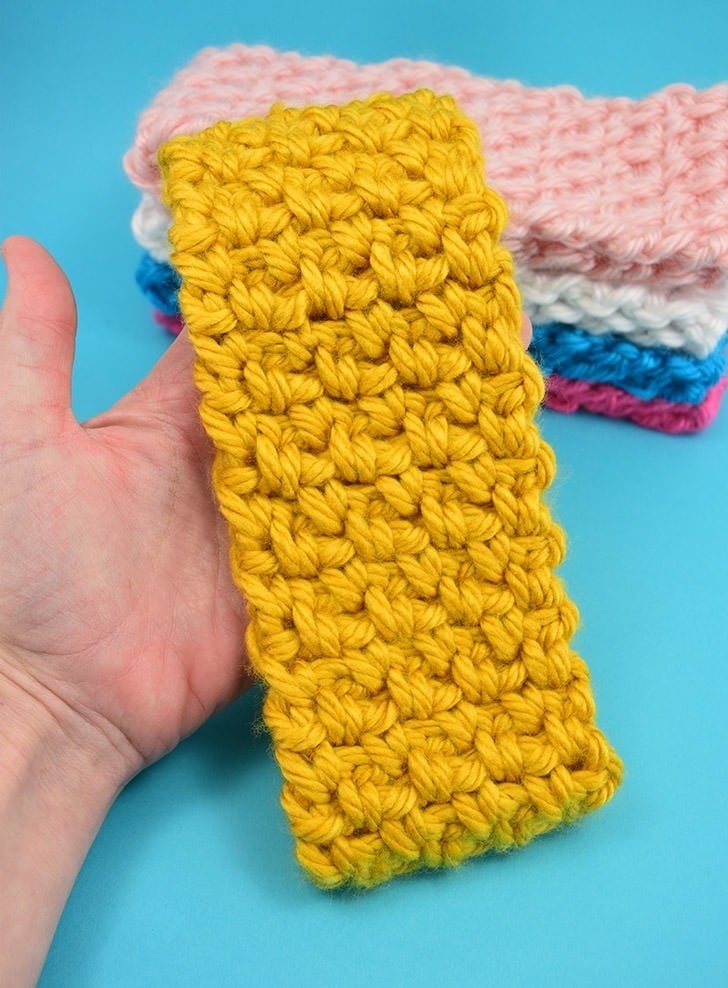 My favorite is probably this mustard gold color. Isn’t it gorgeous? And with that awesome single crochets worked in the gaps of the previous row, it’s amazingly stretchy! 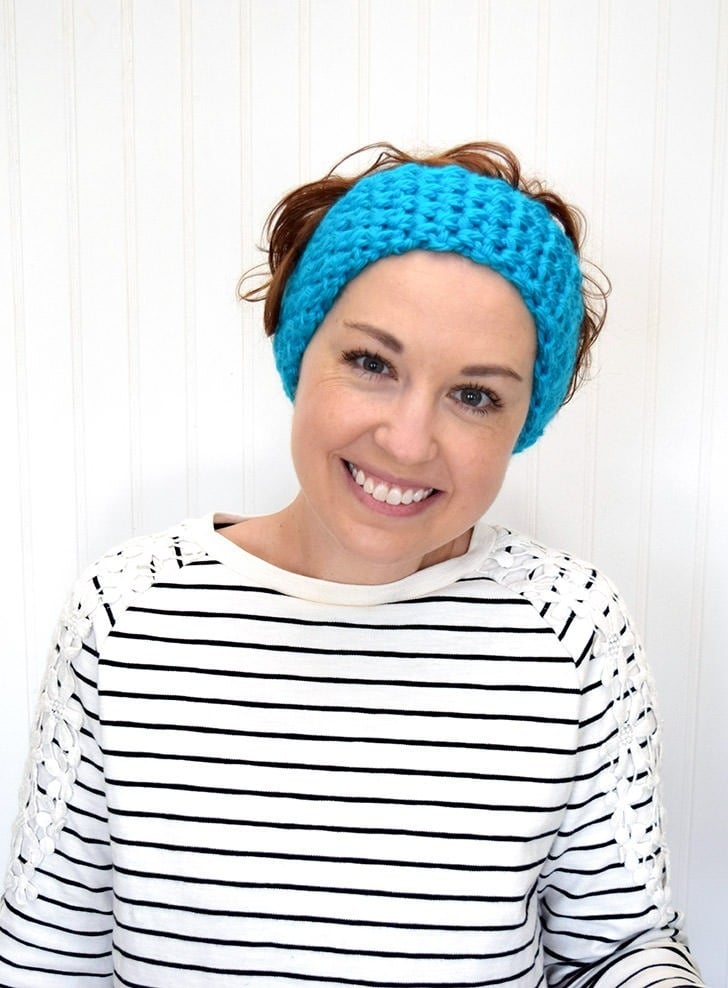