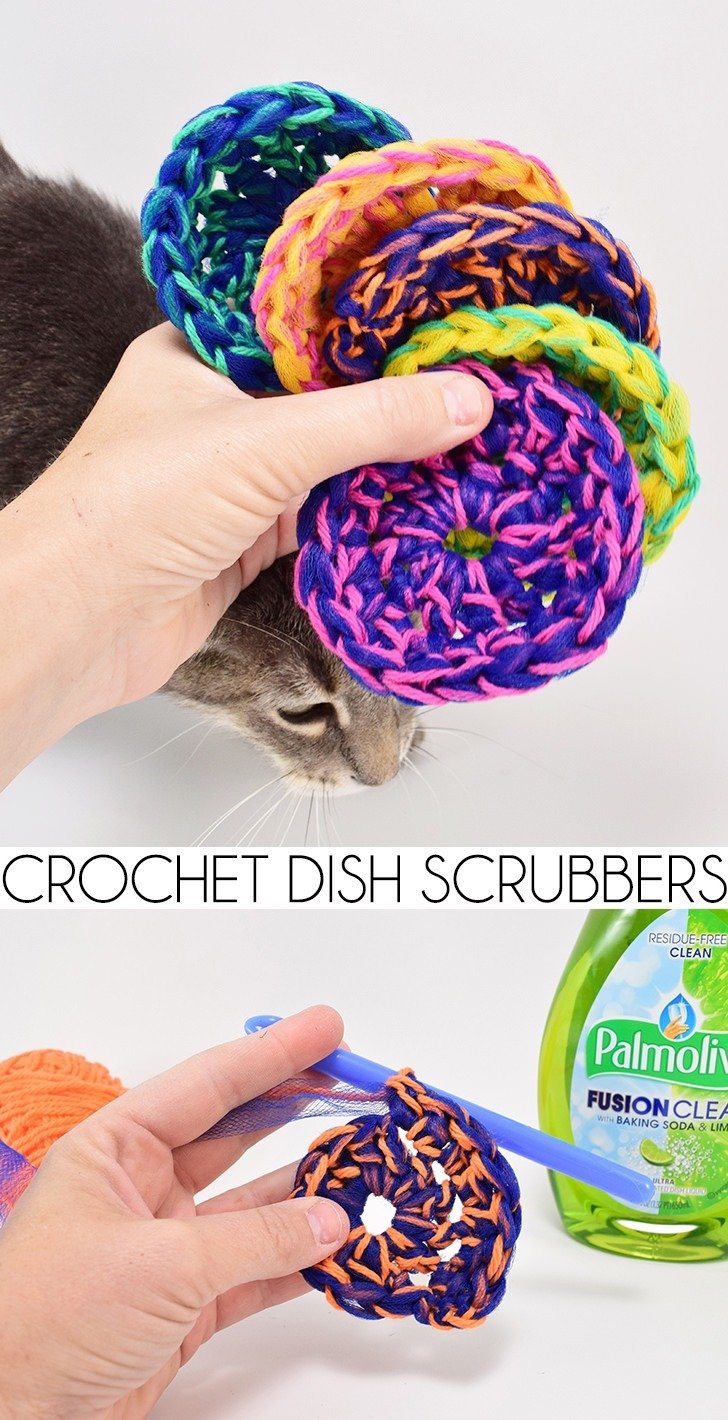 I must admit there is a very, very strange part of me that loves to clean. I mean it. I LOVE TO CLEAN. Vacuuming? That’s my clean jam. Scrubbing floors? I’m so down with that. Cleaning out the refrigerator? Bring it the heck on. Scrubbing the tub and tile? Already on it.

Back in the day I had a “Big Clean Day” every Wednesday. That’s where I tore the house apart and put it back together until it was PERFECT. I would caffeinate myself up and get after it early, early and finish up late, late. And this happened every. single. week. It got to the point to where clients would say something like “I know it’s Big Clean Day but…!” Their pleas fell on deaf ears because the phone was never answered on Big Clean because I just wasn’t having it. In light of all of this I have been informed that this love of scrubbing is kind of strange. It might be more that I appreciate the feeling after hard work or it might be just that I love having a clean home but whatever it is, when I get to cleaning get out of the way!

There are a few exceptions in the world of things to clean that I absolutely dread… dirty dishes. Ugh. Dishes are the bane of my cleaning existence. I freaking HATE doing the dishes. So, it was pretty dang smart that I signed a lease for a house with no dishwasher. Not! To be fair I didn’t notice until AFTER I moved in because they did this kind of shady thing where there was no electricity so our Realtor had to show us around with a flashlight. There were a LOT of flaws I  didn’t initially notice because I couldn’t properly see them. Our Realtor, by the by was FAB, he had nothing to do with this whole showing in the dark nonsense. It came as a total surprise that the house had no dishwasher and no garage door opener.

When I got settled I think I might have even cried when I realized there was no dishwasher. I mean, that is just how much I HATE doing dishes. 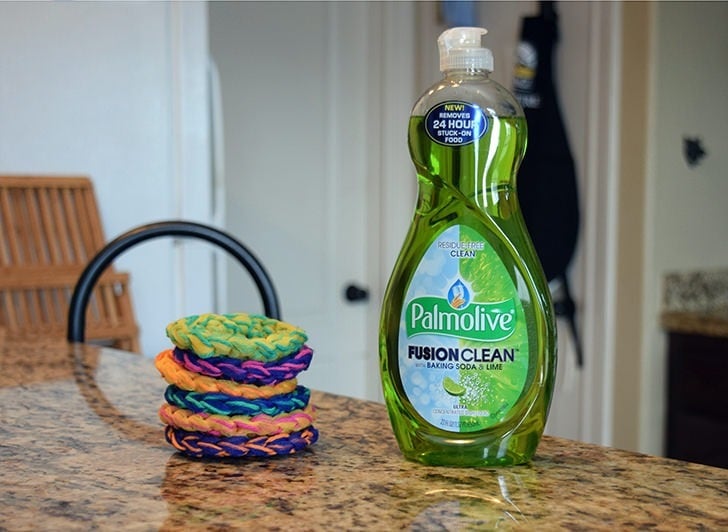 He’s really taken the responsibility to heart. He has his scrubbers and all of this stuff going on underneath the kitchen sink to get the dishes done. And when I recently crocheted up myself some cotton rounds for my face he wondered if they would be good to do the dishes with. It turns out, they were not. They were just too soft and they took on so much water they got kind of oddly heavy. So I made up some of my old-style tulle scrubbies but apparently those thin out as you’re using them with hot water (he can use crazy hot water since he has slow circulation and his hands are always like ice) and the actual scrubby part starts to separate and you’ve got big gaps in what actually makes contact with the pots. It seemed a good idea to try putting the materials for the two scrubbies I have made together and see how that goes. 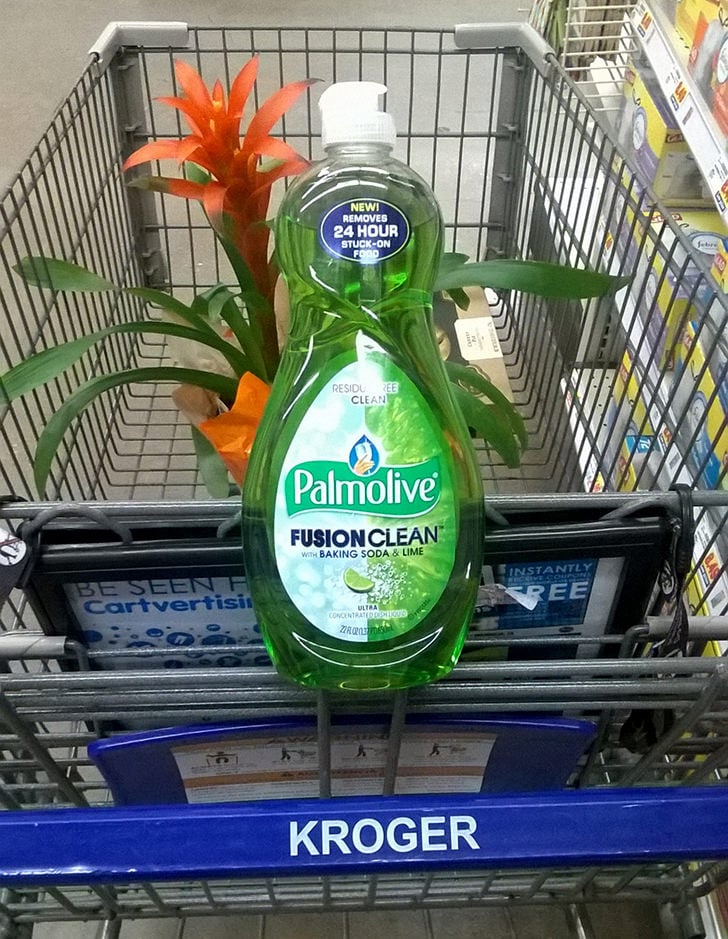 The first time my guy tried out his new scrubbies he also tried out some new dish soap he brought home just a few days ago, New Palmolive® Fusion Clean™ dish liquid. I don’t think Rob really realized that there was a difference in dish soaps. With as little experience I have with washing the dishes I surely did not, myself. It turns out that Palmolive® Fusion Clean™ is brand new from Colgate-Palmolive Company and it has been specially formulated for the tough stuff like 24 hour stuck-on food. Available at Kroger, my Rob grabbed a bottle of the Baking Soda & Lime formula after a day of painting outdoors and it smells amazing. There’s also a Baking Soda & Grapefruit version that I am sure smells a dream if lime isn’t your thing. The combination of citrus and baking soda are A Modern Twist on Cleaning™ that really put some power behind this Palmolive. And then there’s the whole it smells good thing which I think is incredibly important :)

Spoiler alert – Rob is a big, big fan of his new scrubbers. It looks like I’ll be making a whole pile of these guys for him to keep in his repurposed flower vase full of dish stuff under the kitchen sink. The tulle gives them ample scrub-ability and the cotton takes on the soap and water helping to suds his cleaning area up really well. They aren’t too heavy when wet and they don’t thin out so that his fingers are scrubbing just as much as the scrubber itself. It looks as though I have found the perfect crochet dish scrubber recipe! But let’s get in here and make some, it’s no different than any of the other scrubbers I’ve made but let’s go through it really quickly. 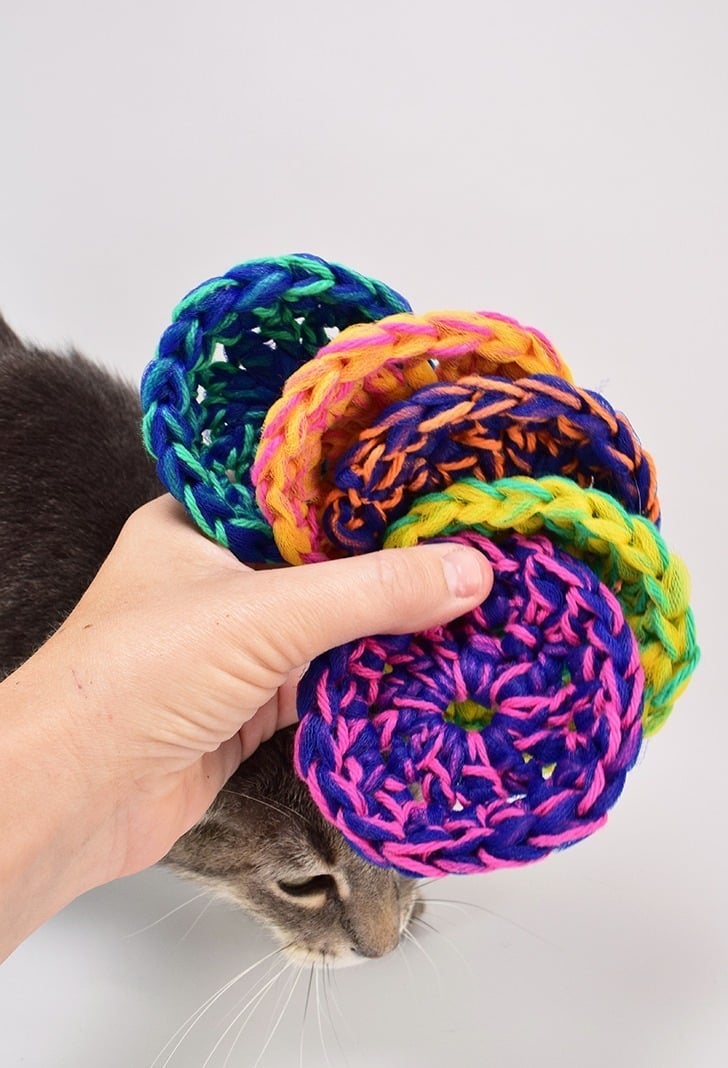 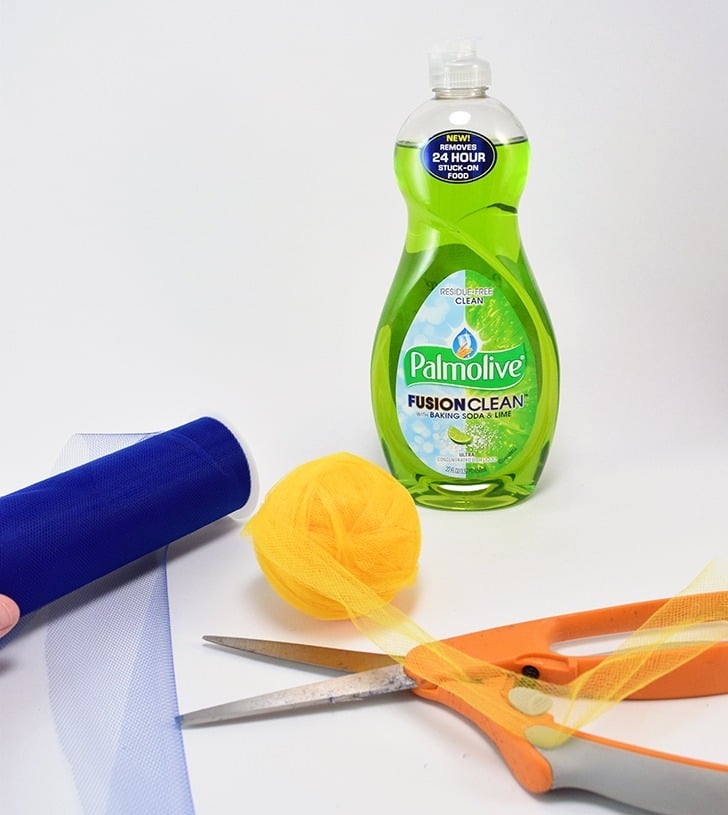 Now my test run, prior to making photos for a tutorial I just had my tulle all wadded up in a mess on my lap and it kept getting knotted up. It might seem like unnecessary effort to ball your tulle “yarn” but trust me on this, it’s a lot faster in the end than undoing knots! 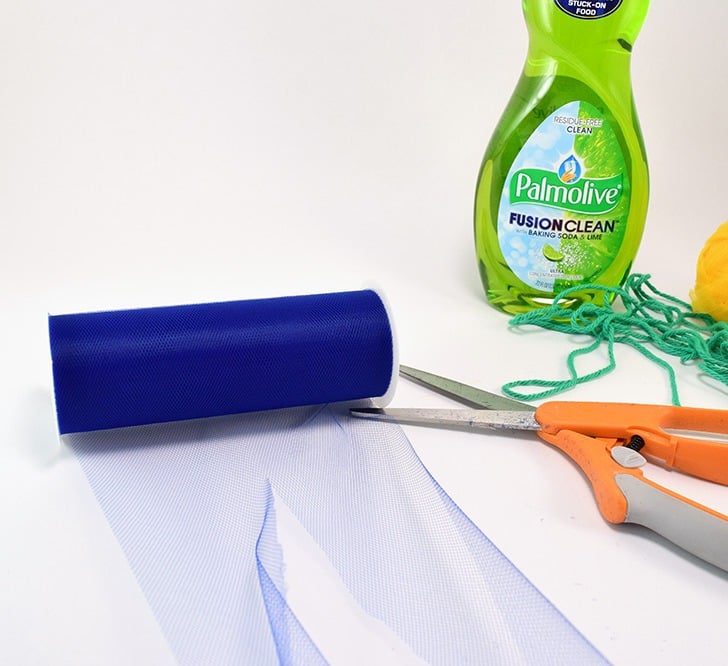 My very first go I used 3″ tulle on the roll from the craft store. When I realized it was cheaper to purchase the 6″ roll and cut it down the middle, to the tune of 8¢ a yard rather than 12¢ a yard from the already 3″ roll, I busted those scissors out. To make it even cheaper, you can purchase tulle by the yard from the fabric section but know that is a LOT of cutting. 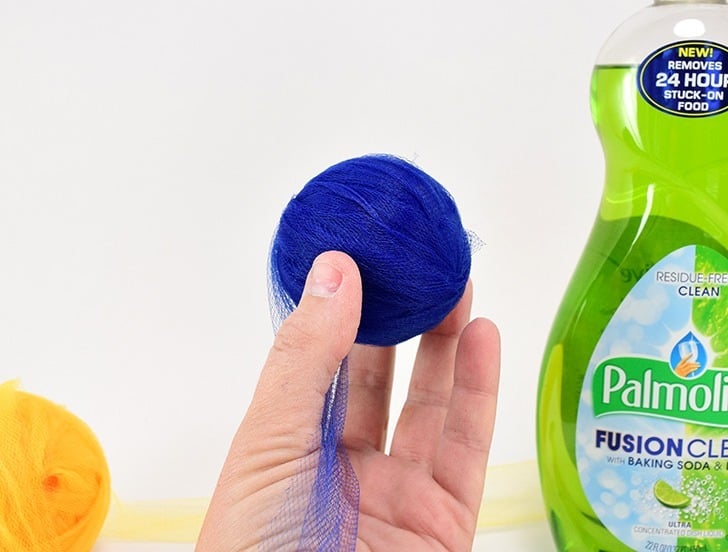 Ball your cut tulle into a ball as you go and you won’t have the nightmare of knots that I had. 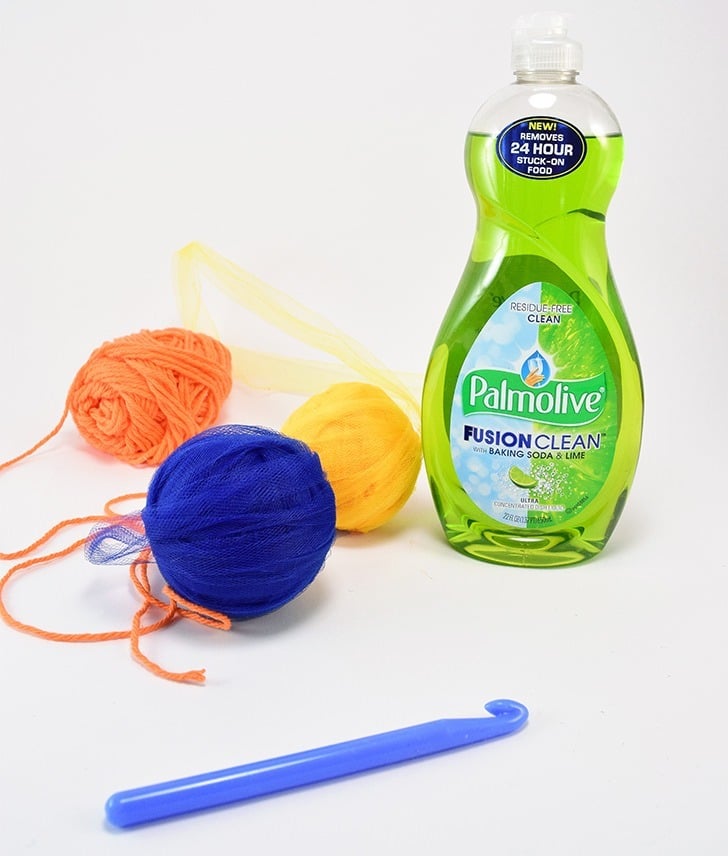 Grab some cotton yarn and a large crochet hook it’s time to get going. 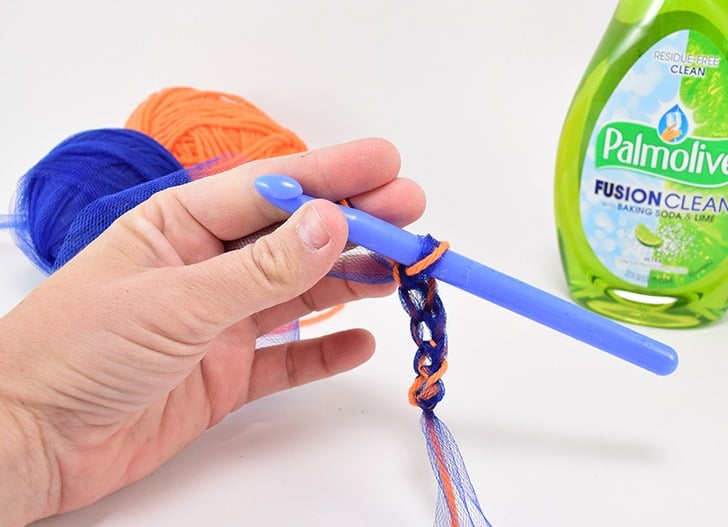 Holding the tulle and the cotton yarn together start your project with a chain of 5. 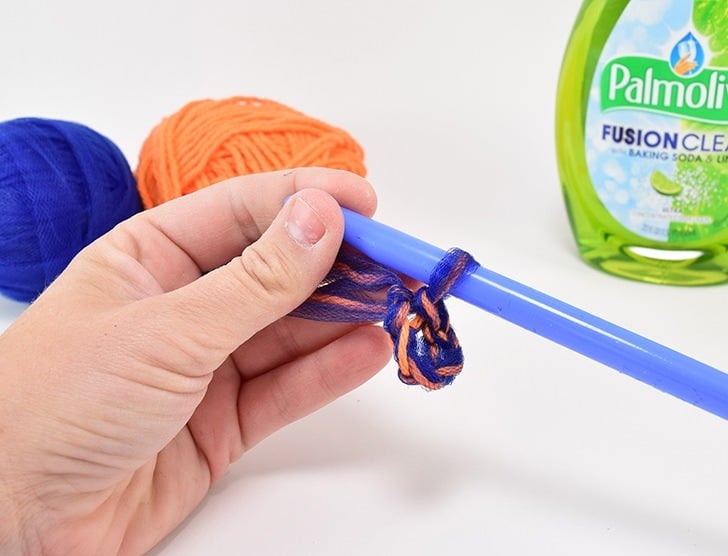 Use a slip-stitch in the first chain (furthest from the hook) to create a circle. 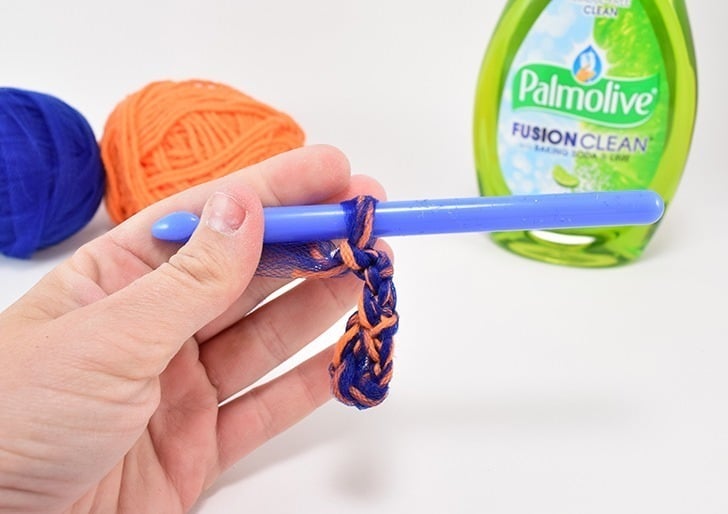 Grab the tail chain 3. This helps to weave in your ends right from the get go. This chain of 3 will act as your first double crochet. 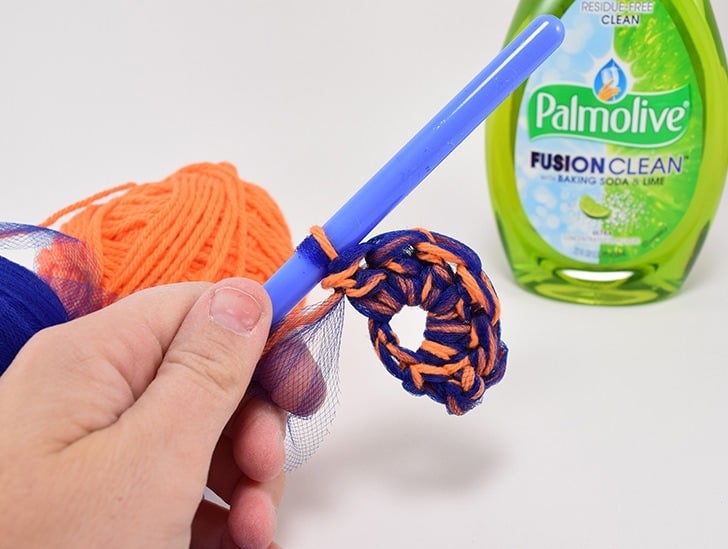 Work 12 double crochets into the circle going around and around.

Once you meet back up with that first chain of 3 use a slip stitch to connect to it and close up the circle. 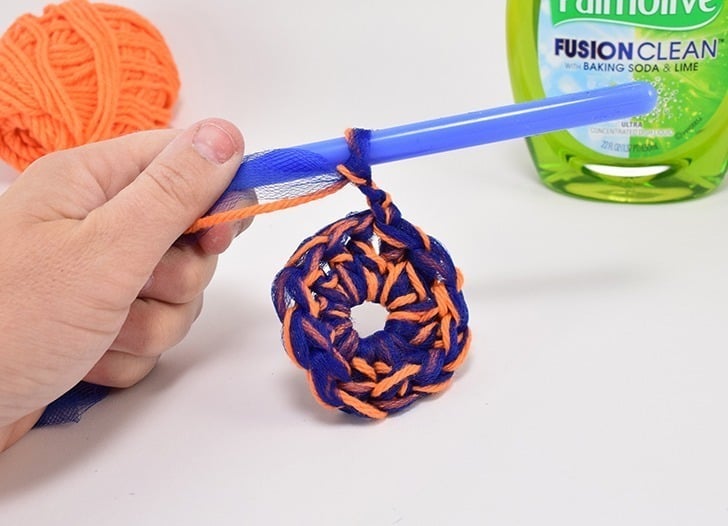 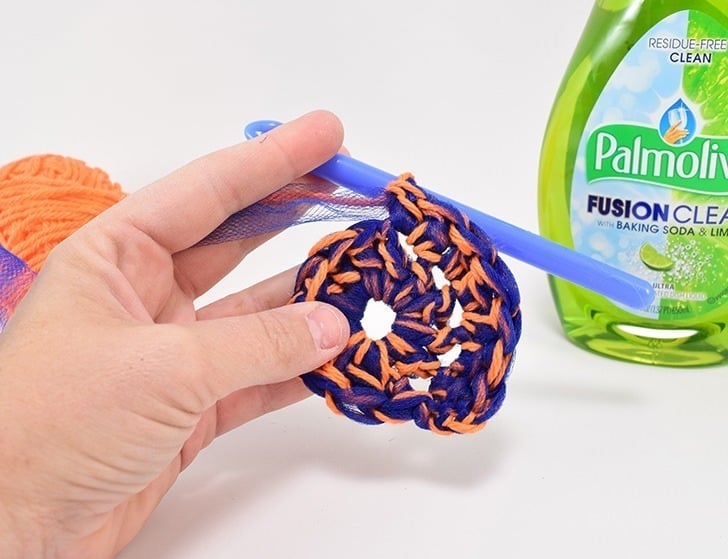 In the first stitch from the previous round double crochet twice. In the next stitch double crochet a single time. Continue around alternating 2 doubles in one stitch followed by 1 double in the next until you reach the end. 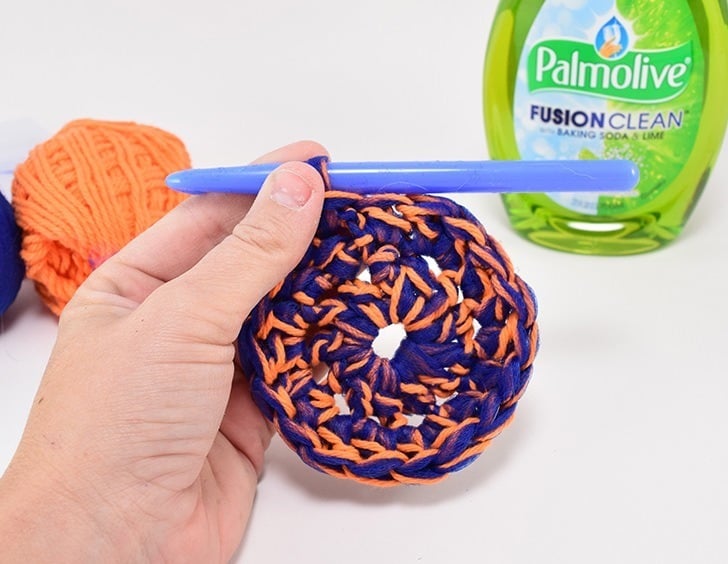 Use a slip stitch to finish up the circle and cut your yarns to have a 2-3 inch tail. 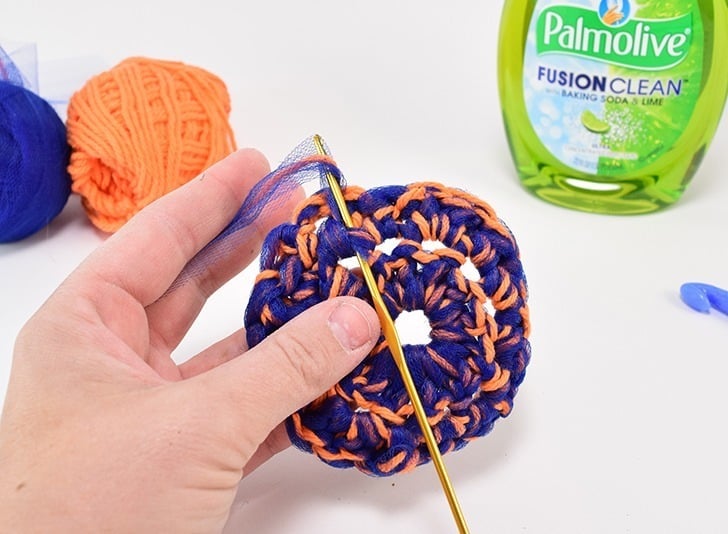 Using a smaller crochet hook weave in that end to finish this crochet dish scrubber up. 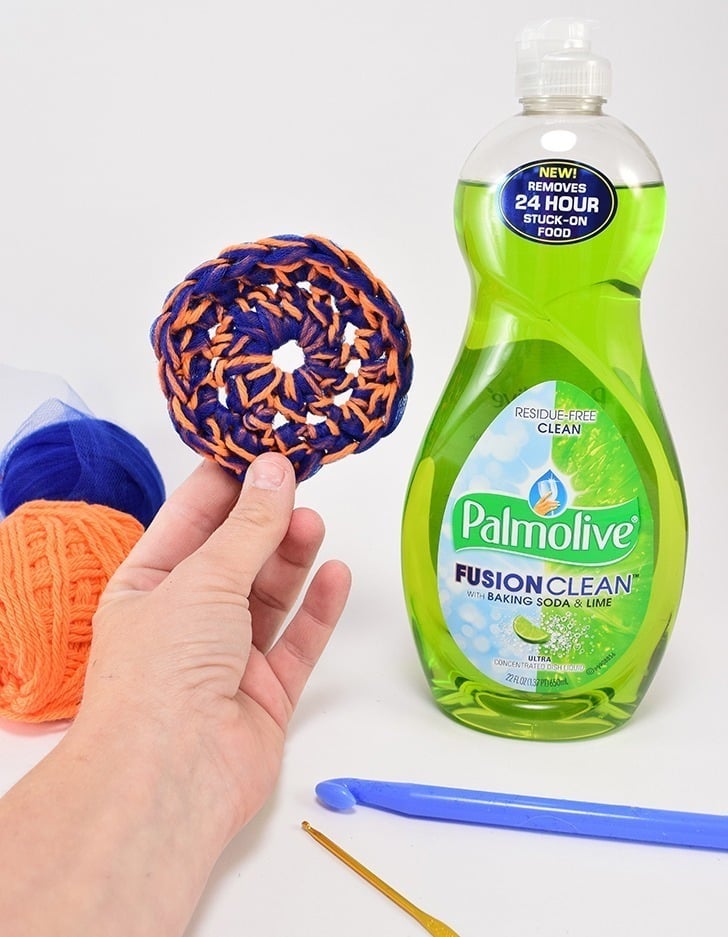 When it was time for Rob to try out his new scrubbies and dish soap I, of course, was there to take pictures. Prior to the little impromptu photo shoot I asked if he was really going to wear his Pumpkin Pi shirt I made for him last October and he kindly changed into something less, well, Autumnal. He loves that shirt and I love that he does :) but it just was not the time nor the place! :) A blue polo that makes his beautiful blue eyes pop made me quite happy, even if you don’t get to see those eyes! I snapped some pics in between flipping the hamburgers for our supper on the stove and listened to what Rob had to say as he washed our supper dishes as I made them dirty. And oh, boy, can I make some dishes dirty.

He first used his favorite reusable OLD scrubbies with his new soap so he could be fair in his decision about whether or not the scrubbies I made were up to par. And JouJou assumed his position as dishwashing assistant as he always does :) Isn’t it funny the habits cats get into?

When he used the scrubbers I made he was really happy with them. I assured him he could go back to his store-bought if he wanted. I was happy that he continued to use what I had made him while I flipped burgers for dinner behind him. And as he washed dishes he commented on how far his Palmolive® Fusion Clean™ was going. He was surprised that with just a few drops of soap that he was getting so much sudsy cleaning action. Like, he mentioned this several times and it looks like we’re going to continue using this version as he’s happy with how much further it goes. It’s that whole 2.5 more dishes than the original thing in action and totally true!