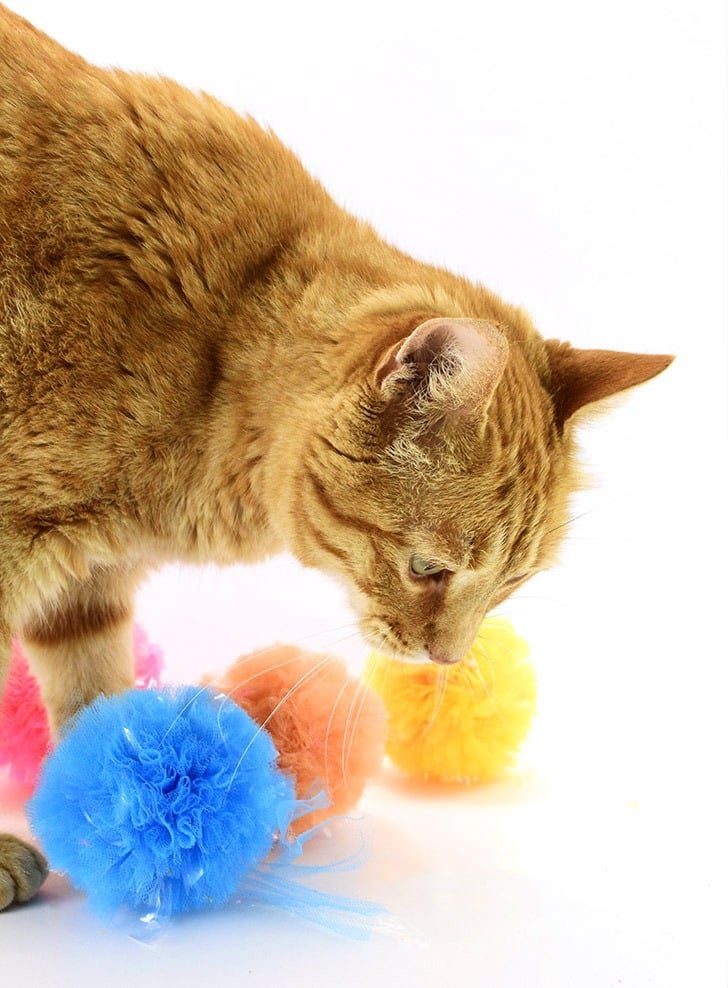 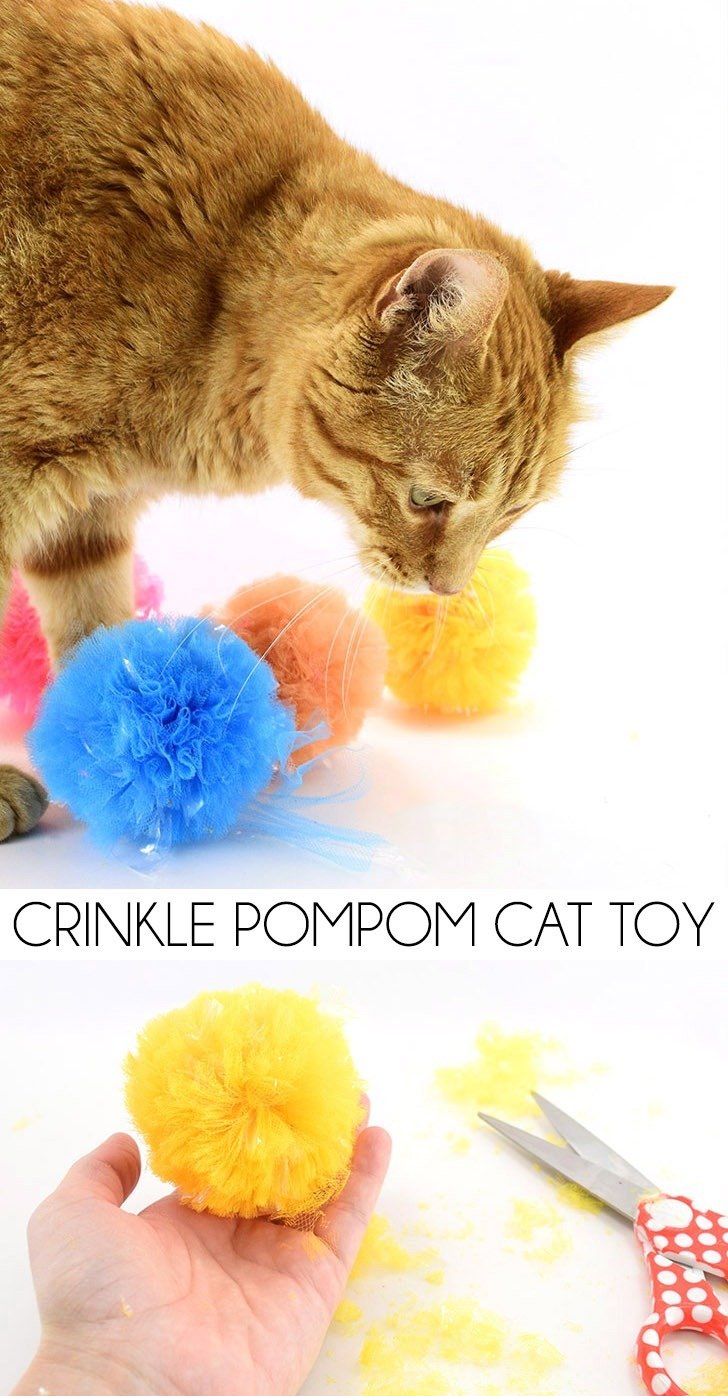 If there is one thing that will always, always make me happy it’s an animal. I figure that my having dogs and cats isn’t just because they are fun to have around but also because they are supportive. My little Carly is normally insanely rambunctious but the moment she sees me crying she becomes this gentle little sweet creature that shoves into my chest and tries to lick the tears from my face. My kitty Marla is an independent little lady who, as she grows older and older, seems to appreciate being alone in a sunny window more than anything but will hop in my lap and let me pet her when I’m suffering from a panic attack. It never ceases to amaze me at just how much the little creatures I have the honor and joy of living with help me feel better during the occasional down time.

But most of the time we are up, up, UP and we play a lot. If the dogs are awake they are playing either with each other, with one of the cats (who aren’t always so into playtime) or with the resident humans. That would be Rob and me :) We have toys all over this house and I am not even playing. There is a toy box for cats and another for dogs in the living room and another for the dogs in the master bedroom under a bench. 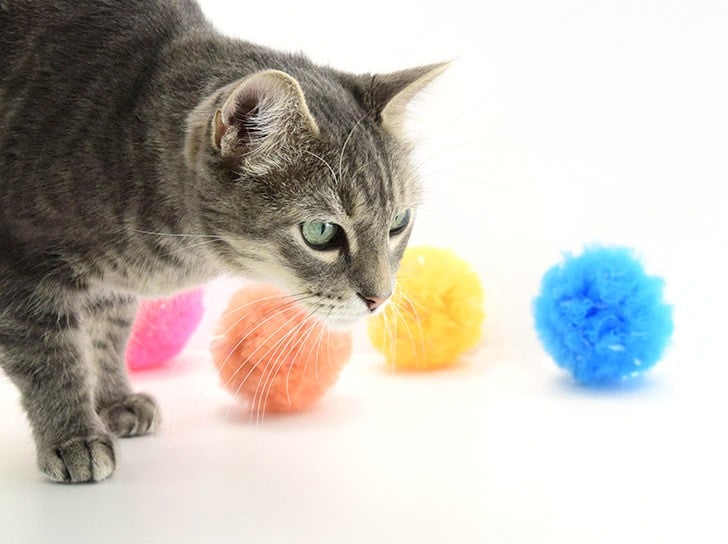 While the dogs will play with anything from a store-bought toy to a dirty sock they find on the bedroom floor my cats are far more finicky. Or perhaps they are far more stubborn :) There are countless toys we have spent good money on only to find out that the cats are all like “eff that noise I’m going to go bat the air while I’m in that Amazon Prime box that just arrived.”

Yes, it seems as though you can’t buy your way into the affections of a cat so we must find other ways. It seems to me the way into a cat’s good graces is an exceptionally awesome ear scratch, a warm and lengthy cuddle or a handmade toy. Stepping up my homemade cat toy game, I found some material to give the things I make that annoying to me, but much loved by my kitties (and babies!) crinkle sound. 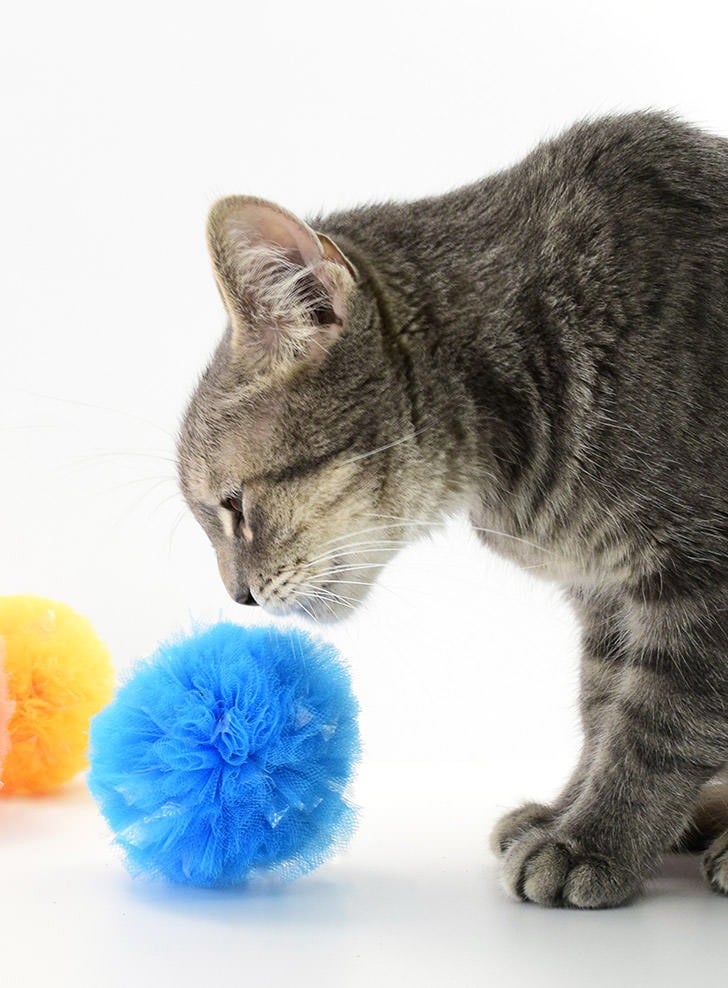 Let’s hop to it, shall we? For this project you will need: 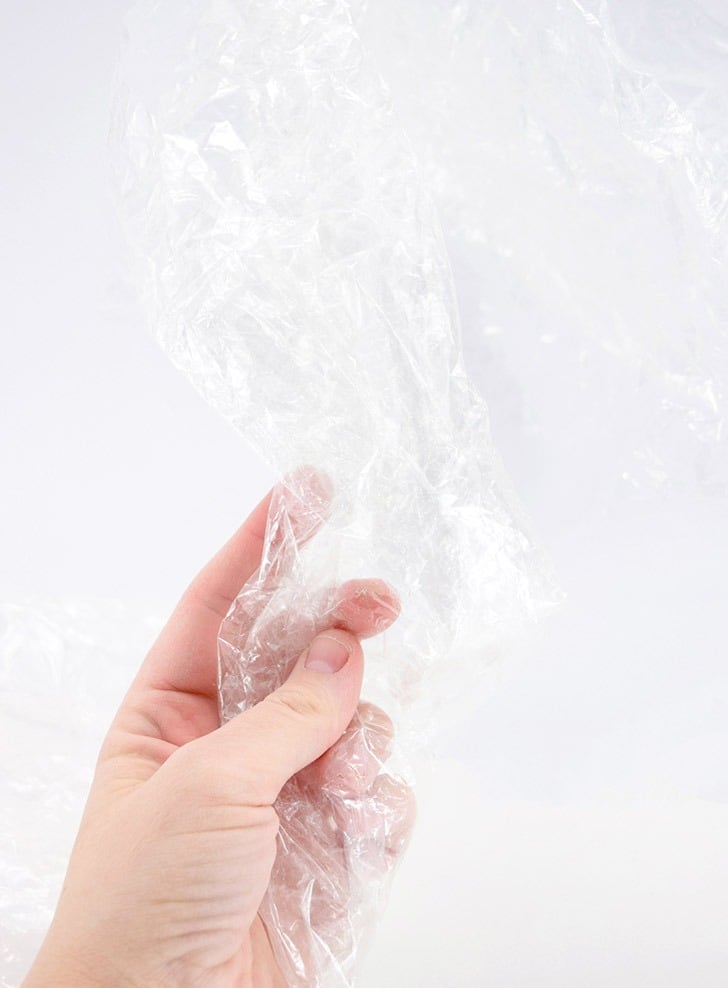 See that stuff up there in my hand? Just barely, right? It’s a material I purchased somewhere online but cannot currently find the supplier of. I linked in the items you need for this project to a similar listing on Etsy. After some research, I found that this might just be a thick cellophane material that you can find in the gift wrapping section at craft stores. Since I haven’t tried that I cannot attest to it, but I can say that the crinkle paper made for baby and cat toys is adequately noisy! 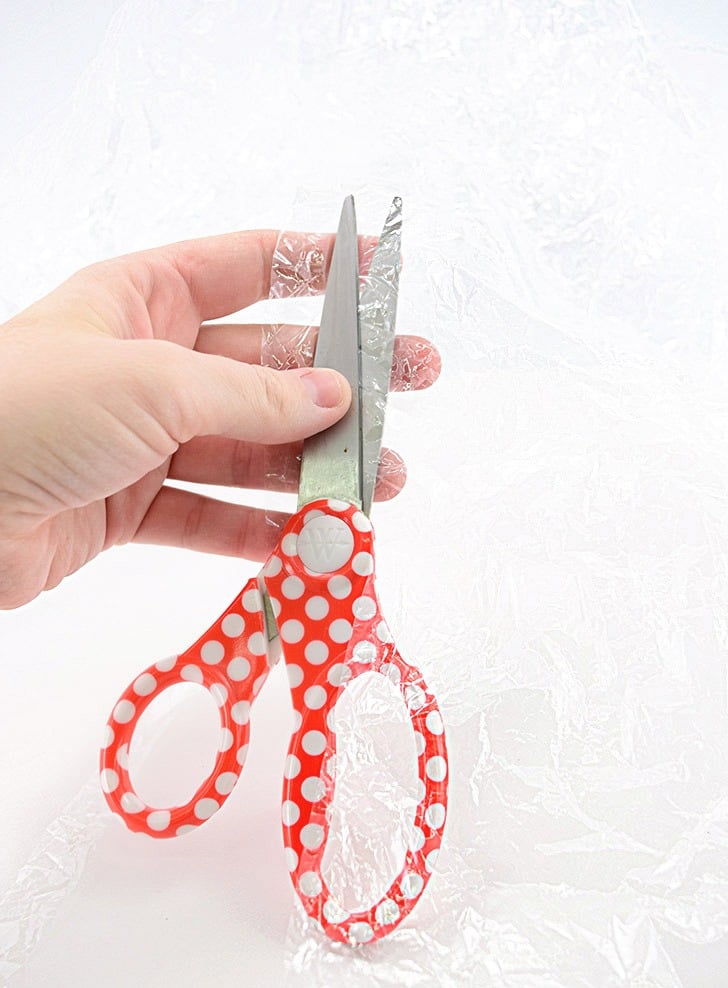 Cut this difficult to see business into strips about 1/2-1 inch wide. The longer the strip, the better. 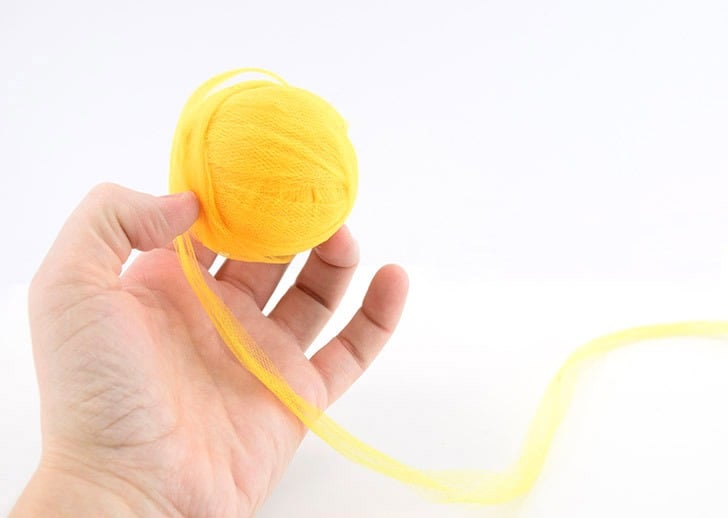 Grab a roll of tulle and cut it into strips. You can then wind the strips up into a ball for easily handling. Now I cut my strips for this yellow pom way too thin. I’d recommend cutting the 4 inch roll right down the middle in half for a nice full finished toy. 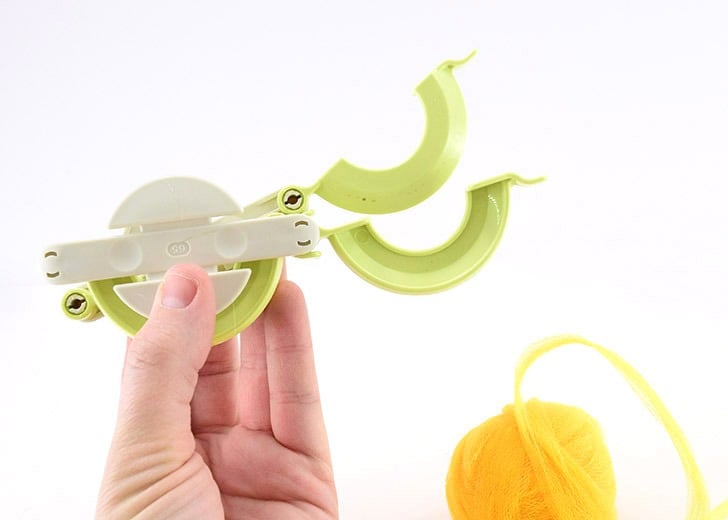 Extend out the arms on one side of your Clover pompom maker. 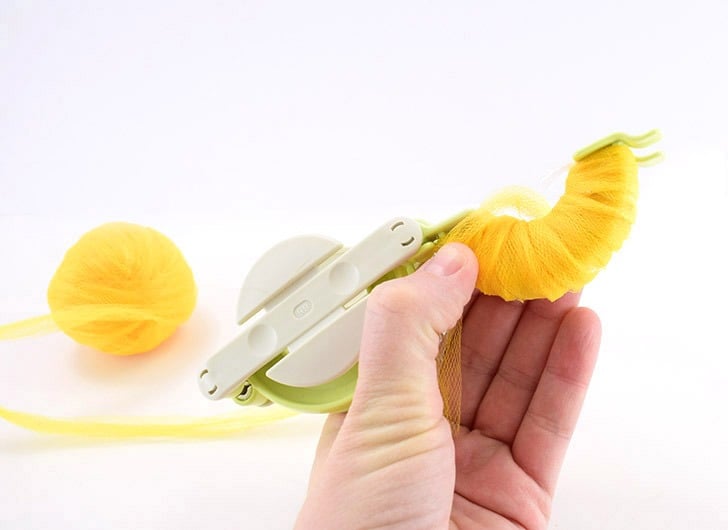 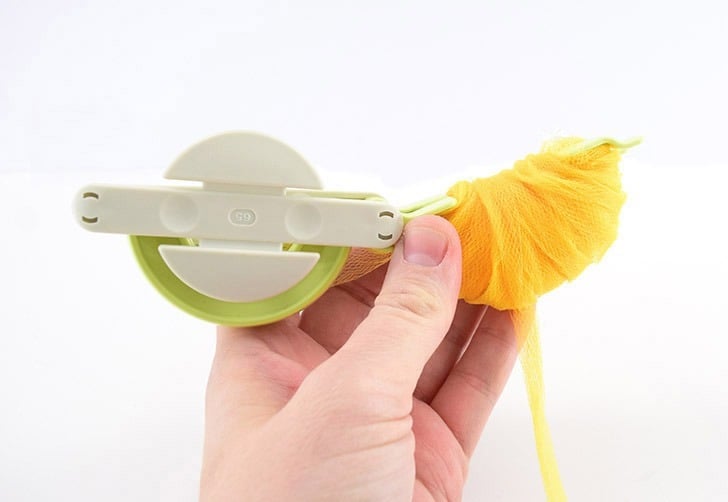 Completely cover the arm until the indentation is filled like you see above. 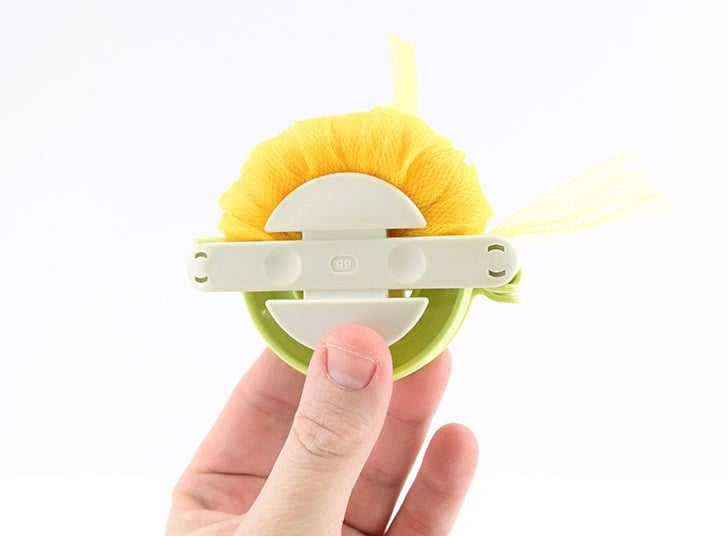 Close the arms and trim the excess tulle/crinkle. Repeat for the other side. 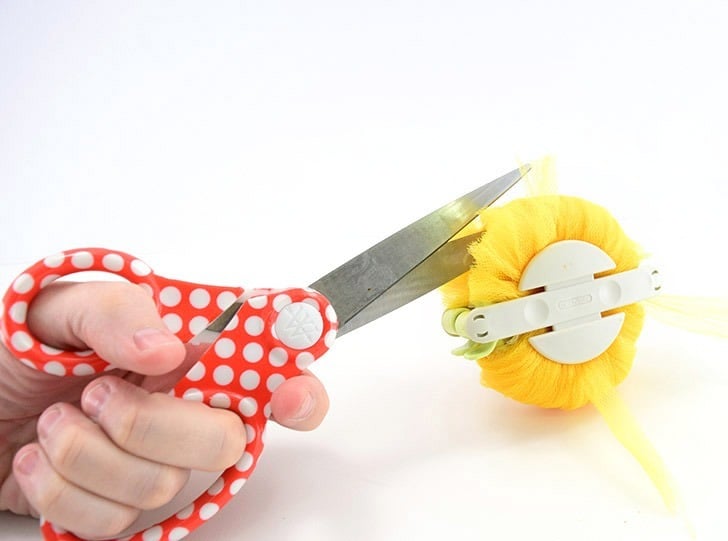 Using sharp scissors trim in between the two sides of the pompom maker. It’s easy to locate, like a gutter all of the way around. 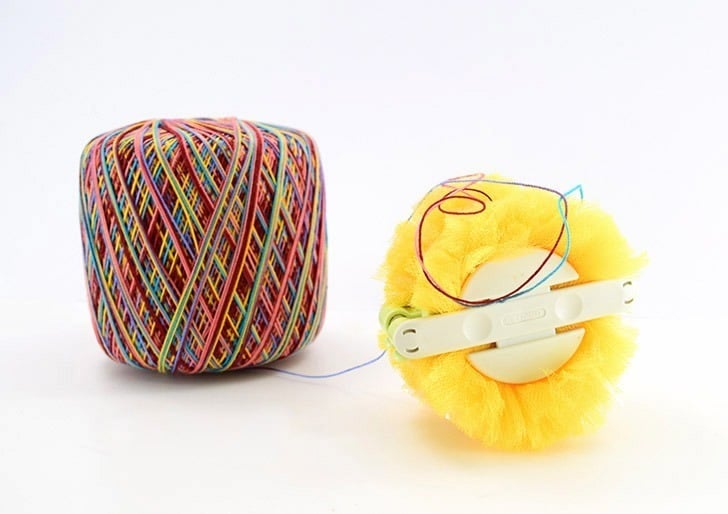 Use strong cord, string or thread pulled up through that gutter you made your cut in and tie an overhand knot a few times. With this project I recomend turning the maker around a few time and creating several knots so the end result will be a bit sturdier. 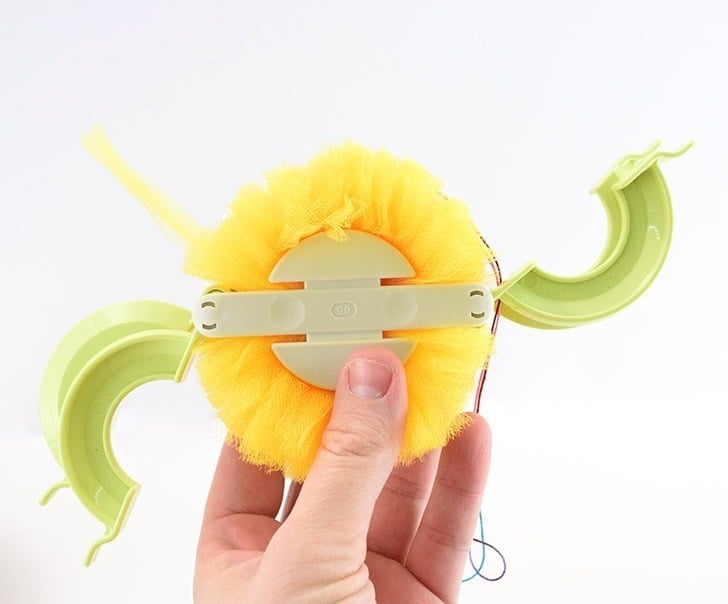 Open the arms of the pom pom maker and pull the 2 sides apart to release the toy. 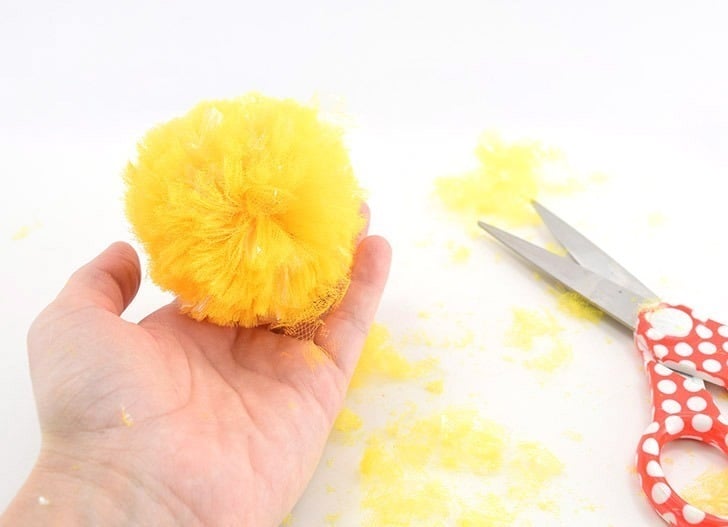 Trim down the knot string or cord so no longer visible and then shape up the toy with scissors for a nice, round shape.

On a side note while trimming this business do NOT do it over your lap. Oh my dear word, you guys, I did that and I guess I got little itty bitty pieces of tulle stuck in the weave of the fabric of my pants and it was so flipping itchy. I had to wash them several times for them to be wearable again without me shoving my hands down my pants to scratch the bejesus out of my thighs. And be sure to really shake and rub on that thing to remove any itty bitty scraps that get stuck in the toy itself because they are gonna do the exact same thing. Moving on… 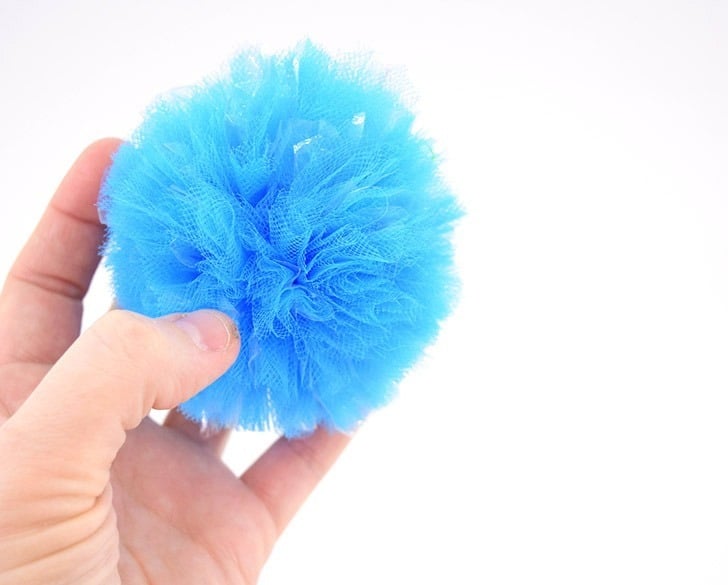 The color of the crinkle pom pom cat toys seems to make no difference at all for the cats so totally feel free to stash bust for this project like I did. 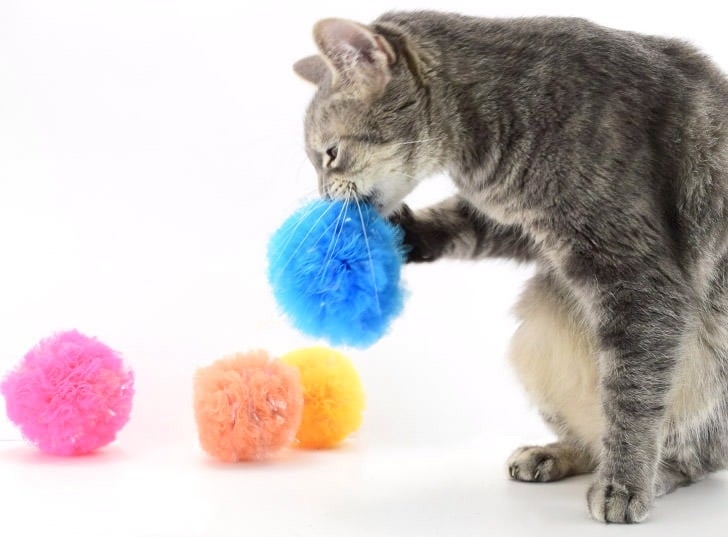 Initially my cats didn’t seem to be terribly interested in the toys which was a total bummer. Since I couldn’t find my catnip oil to spark some interest I instead grabbed some of the green stuff and rubbed the yellow pompom all up in it and then shook out the catnip out. After a bit of catnip scent attached to it we suddenly had one of the more popular cat toys around here and they even took to the other 3 that were not ‘nipped up.

If they get a bit rough with the toys they can pull out pieces of the tulle or crinkle material like you can see in the blue toy below but with these being so well filled out and fluffy it will take quite a while before the toys are actually torn up, if it ever even happens. My first batch of pompom toys were made last summer and almost all of them are still going strong. They’ve got a lot of cat hair and sometimes some weird floor junk stuck in them but they’re still fluffy, puffy and well played with!

I'm a crafty cat lady with big dreams and an inability to sit still. I make it, I live it, I love it. Here at Dream a Little Bigger you'll find lots of inspiration for crafts, crochet, DIY, food, pet life and all things rainbow. Lots and lots of rainbows.
2.3K Shares
Pin2.3K
Share25
Tweet
This site uses cookies: Find out more.