Right now I’m all about 2 things.

Well, technically I’m all about Rob using the mitre saw for me and since I’m as clumsy as they come. It seems better to watch him cut my boards for me for a weensy bit longer before I get after it myself and maybe lose a finger. To be honest, that crazy loud jarring sound when it starts scares me half to death :)

In order to both use the saw and feather our new-ish nest I’ve been drawing up ideas to make things pretty and functional. You see our house is pretty crap about storage. Sure we have a pantry but that’s because we only have, like, 3 kitchen cabinets. Okay, so I’m exaggerating a bit. We have 5. <— not exactly exaggerating. And we have 3 closets in the spare rooms/offices but they are all full of Rob’s art. So I’m trying to find ways to hide things in plain sight.

So when we saw a ladder at the store that looked rustic and awesome and would be the greatest place to hang up our living room throw blankets we ran over and flipped over the tag. Or maybe I ran over and Rob eventually got to the ladder, too :) Once that tag flipped over I immediately started cursing. Because it was a flippin’ ridiculous price. I know it’s one of those places that does “sales” so you can wait and get it on discount and feel good about it, but 50% off of ridiculous is still dang ridiculous. I was all, screw that ladder! I can make my own friggin’ ladder! And so I did :) Now it didn’t come together perfectly because I’m still new at this stuff but it did come together and really dang well in the end. And since I keep it real ’round here I also shared my significant fails down below. 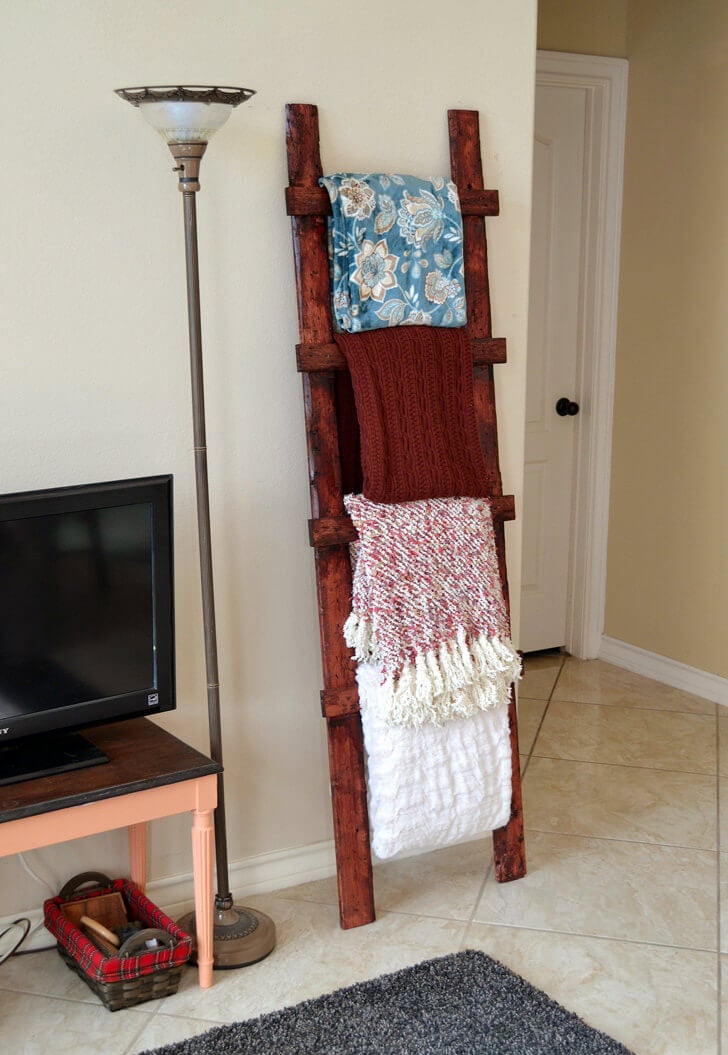 So if this is your very first wood project know a few things… The wood will cost you around $8 so even if things go way wonky you won’t have wasted tons of money. There are far more expensive crafts out there to mess up but this ain’t one of them. You can finagle this thing a good couple of times until you get it right so if you don’t succeed the first go have another 2 of 20 if you need it. You don’t need any super fancy tools. Yeah, we have this fancy mitre saw but I bought this wood way before we had that in our garage. My plan was to use my old school mitre box and saw like I’ve done for every other project on this post and it’s not a far-fetched idea because you don’t have a bazillion cuts. So let’s get this thing together, shall we? 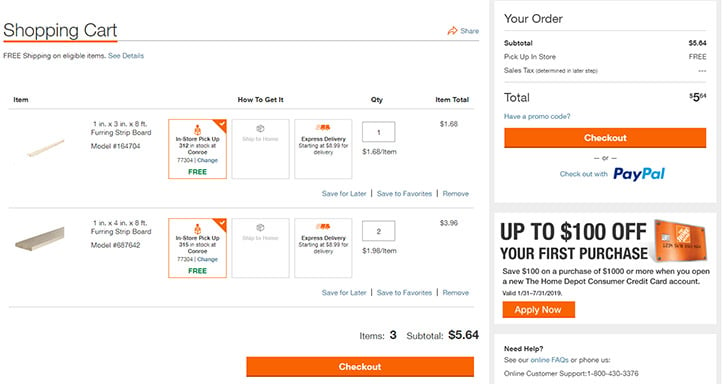 It’s been 4 years since this post was created and it was brought up that the cost of $6 for the wood boards for this project was unbelievable. If purchased through Home Depot this project is still under SIX BUCKS even years later :)

I purchased 2, 8-foot 1×4 boards and 1, 8-foot 1×3 board of furring strips. They are the cheap stuff :) I went through and picked out boards that were straight but flawed. Ones with bark still showing were what I specifically wanted and they were easy to find. Each board had some printing on it so I simply sanded that off with a quick hit with sandpaper before moving on.

Rob cut my my 1×3 board into slats for the ladder at 22″ apiece. I was able to get 4 out of an 8-foot board with a bit of scrap wood left over. My 8′ boards were trimmed down 72″ each for each side of the ladder. 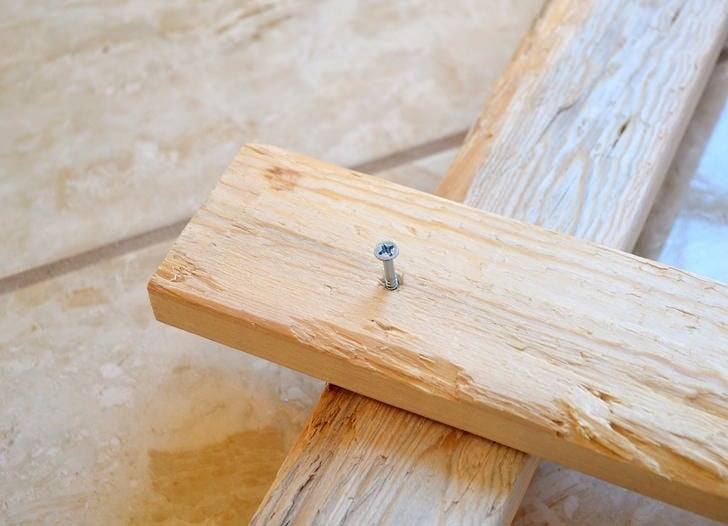 Lay the ladder’s legs on the ground equally distant from one another top and bottom bottom and place the bottom edges on something straight. You can use just about any screws you have on hand just so long as they aren’t so long that they go all of the way through both pieces of wood. My screws were #6 1 1/4 wood screws I already had on hand but you can grab a back for around a buck-ish. 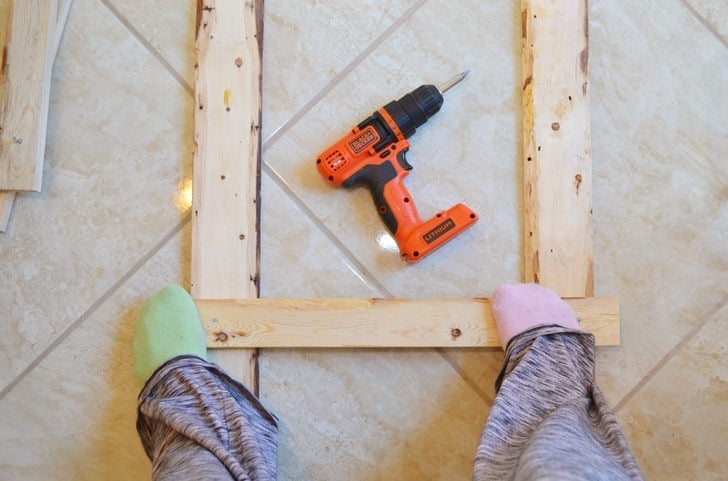 Lay your slats on top of your legs and screw them in. You can measure out the slats or eyeball it. Since I was going rustic I eyeballed it 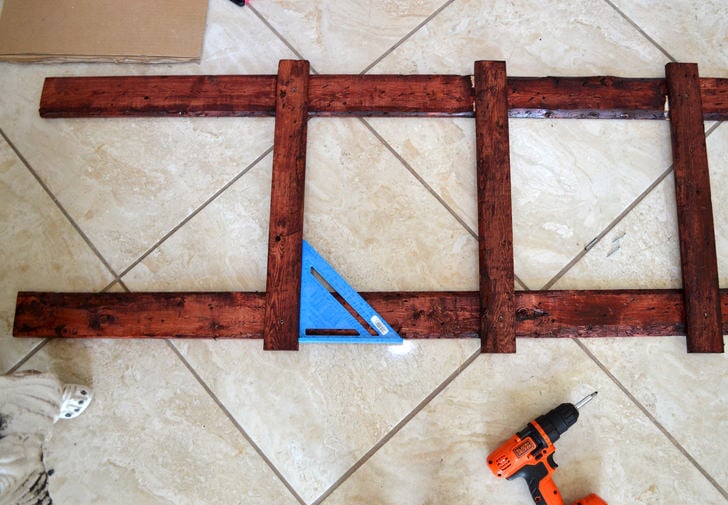 Now, you can tell that this is totally out of order, here but we’re going to go with it anyway. See that blue thing? It’s a speed square and I should have busted it out long before the wood stain but I’m new to this stuff and didn’t think about it. If you make sure your legs are equally distant apart and straight you can use the speed square to line up each slat. Run the ledged bottom of the square along the edge of the leg and then make sure that the slat is flush with the 90° angle. Repeat for both sides of the slat to double check and then screw down. You just need one screw per side… nothing fancy. 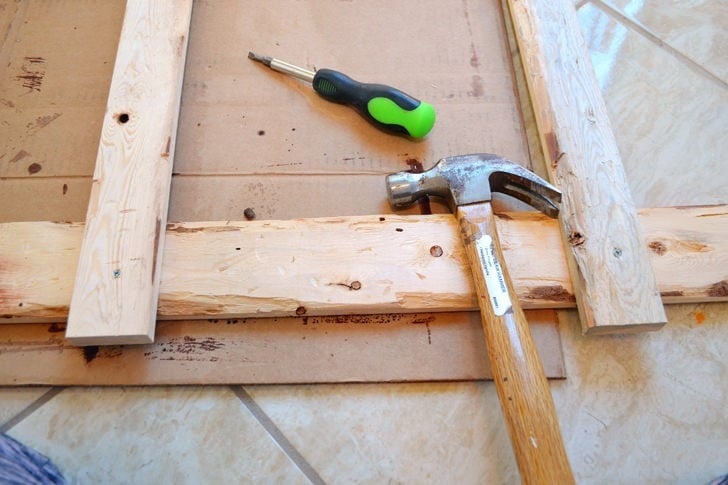 Grab your hammer and beat the crap out of your wood. The dull end will make dull, circular marks and the back end will make deep, straight grooves. This part of the process is pretty cathartic :) 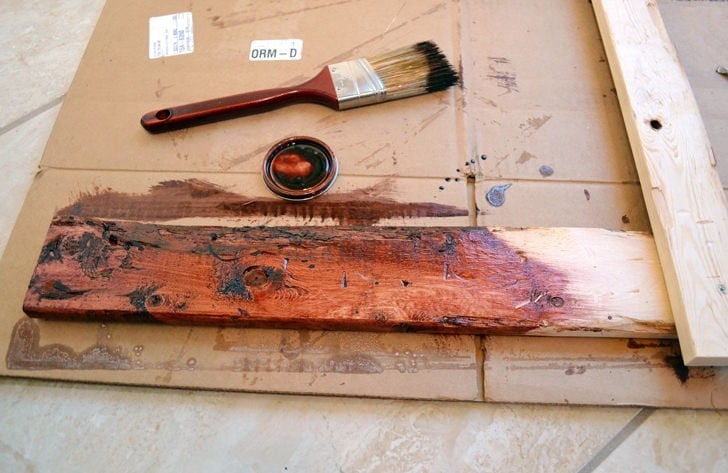 Stain your wood allowing the stain to pool up in the natural grooves and imperfections as well as the marks you made with your hammer. Allow to dry fully and you’re all set… 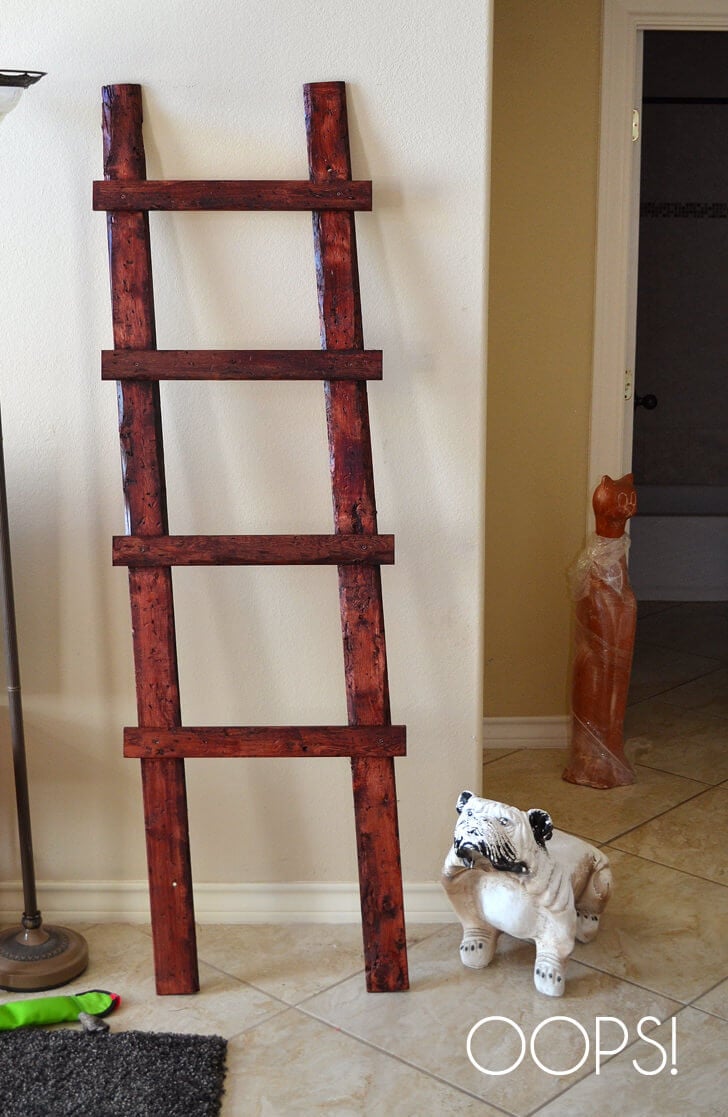 …unless you’re not. Oops! SO this was my first attempt. I was all stoked and happy and tossed it against the wall and instantly saw the problem :) That thing is STUPID WONKY! So I tried again… 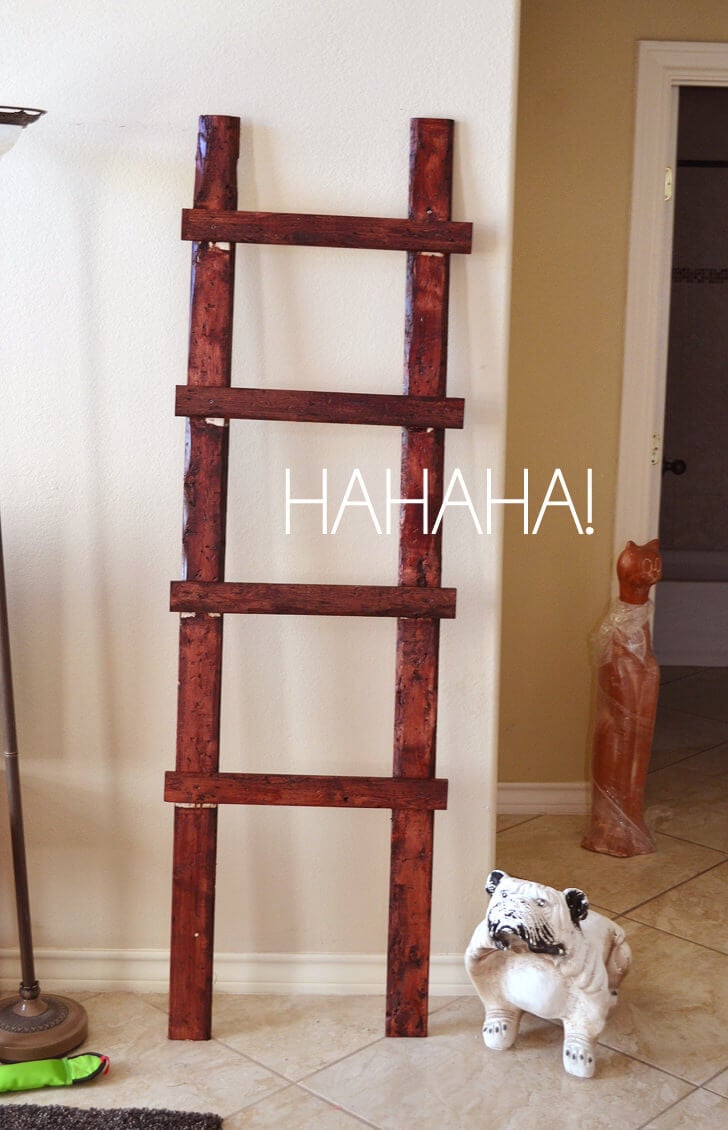 Hahaha! Still leaning but this time in the other direction :) I was laughing so hard that I couldn’t get a pic that wasn’t fuzzy :)

I wound up figuring it out by placing the legs of the ladder pushed flush against that wall there so that they would both touch the floor the same. Then I measured out the top and the bottom with my tape measure to be SURE that they were both the same amount of distance apart. 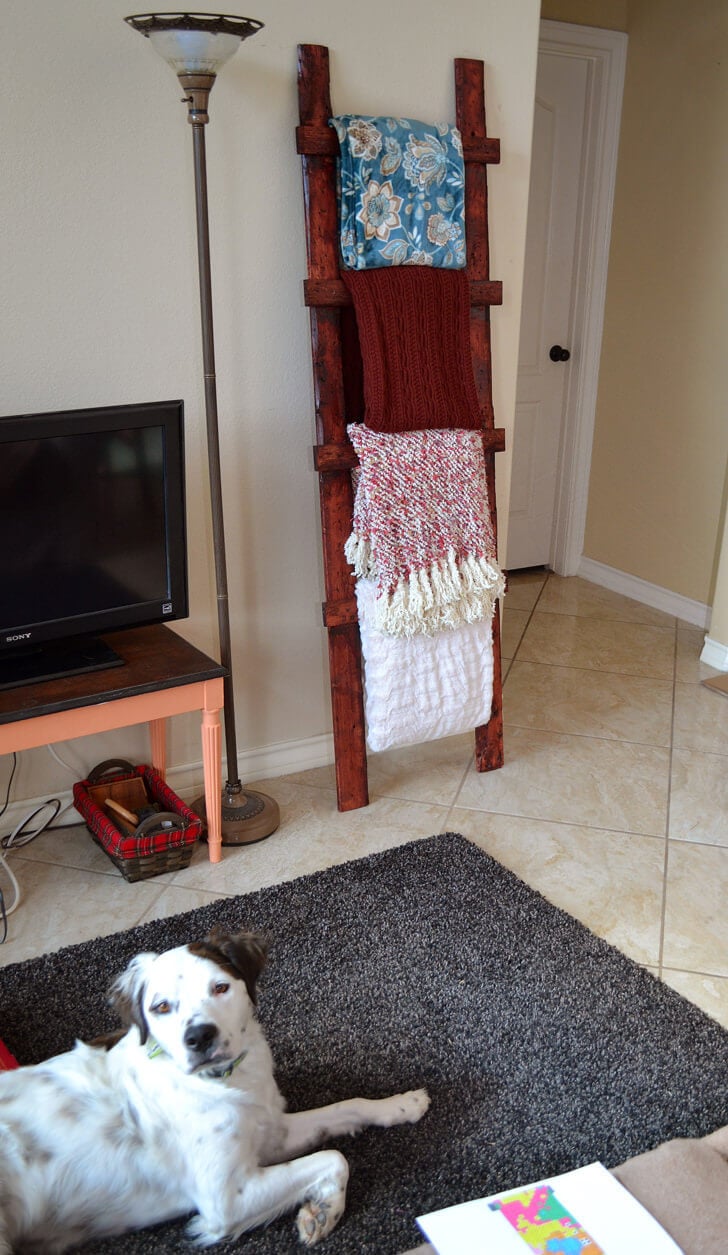 And that worked out very well indeed! Even Ollie seems to think so :)

Not bad for $8 even if it took me way longer than I had anticipated to get it done! But it was a really good learning experience, too and I’m pretty confident that if I make another one, maybe for towels in the bathroom, that I will have no problems making it significantly less wonky on the first go of it! 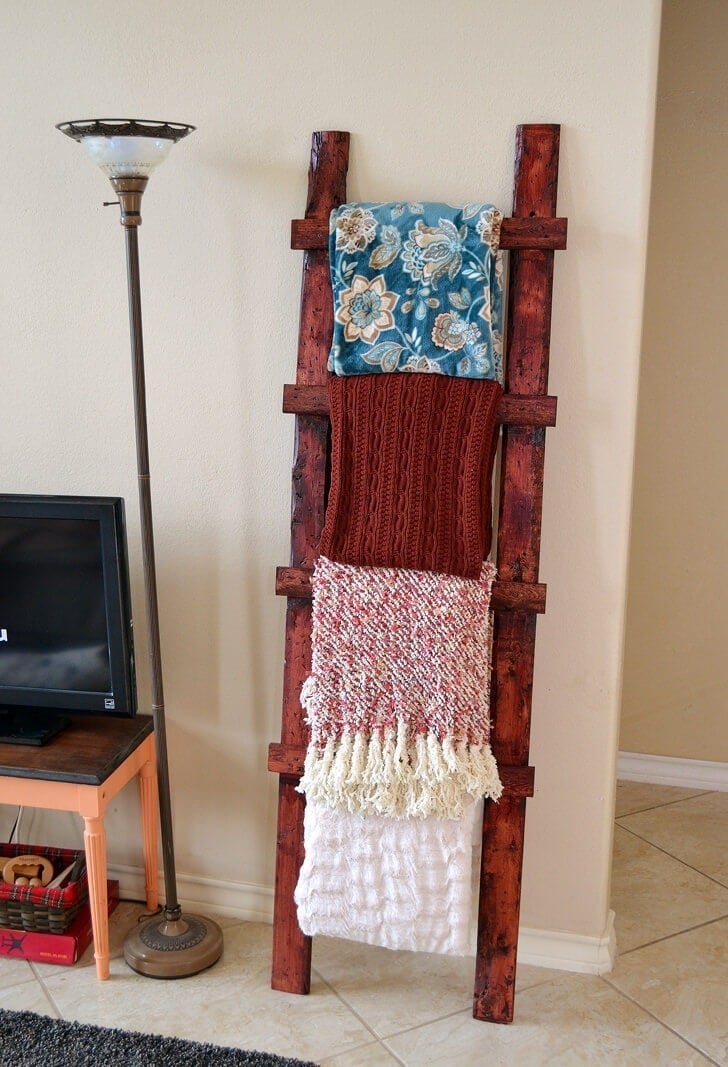 I'm a crafty cat lady with big dreams and an inability to sit still. I make it, I live it, I love it. Here at Dream a Little Bigger you'll find lots of inspiration for crafts, crochet, DIY, food, pet life and all things rainbow. Lots and lots of rainbows.
28.5K Shares
Pin28.4K
Share107
Tweet
This site uses cookies: Find out more.